This review should have been up a real long time ago, I just forgot it existed. So now that the long lost pictures have surfaced, I can bring you guys this long overdue review on one of the coolest Transformers.

Warpath likes to throw in some onomatopoeia when he speaks which is a bit strange, but then again, he is a robot that transforms into a tank. KABOOM!

Warpath is part of Hasbro's Generations line which has consistently given birth to very well engineered and classic looking robots. This version of Warpath is released in Deluxe size so he doesn't have to look teeny next to your other Transformers. Out of the box, he is in tank mode. Weapons adorn the turret area. One of the weapons even fires a long spring loaded missile! 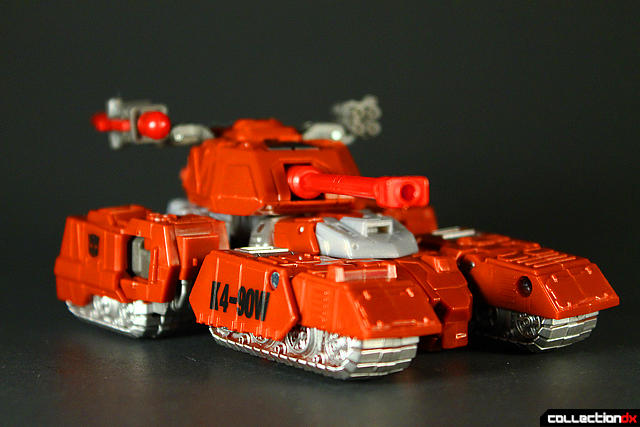 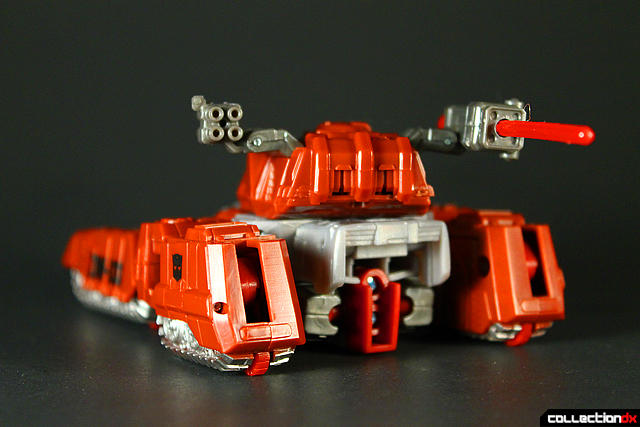 As good as he looks on the outside, you would think the bottom would be a part-riddled mess. However the bottom is pretty clean. Notice the nice contrast between the maroon armored shell and the silver tank treads. 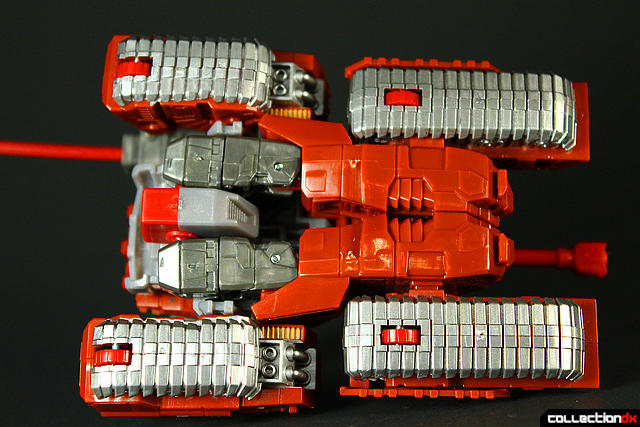 I'm not a fan of the one color faction logos, especially when they are black. Here you can see the firing mechanism of the weapon feature. 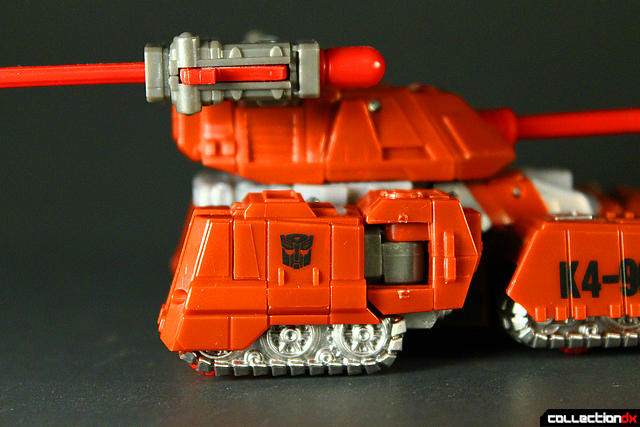 Transformation is pretty straight-forward but clever. Much more involved than his G1 toy. He pulls off a nice neutral pose. 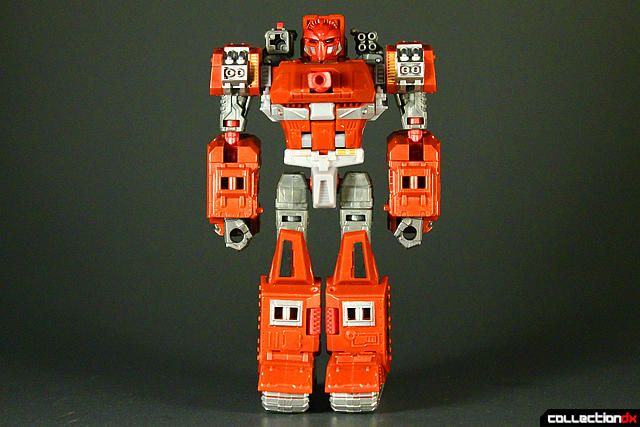 That doesn't mean he has to stay that way. This guy is nicely articulated. Warpath displays a fair amount of paint apps to keep the eyes stimulated. 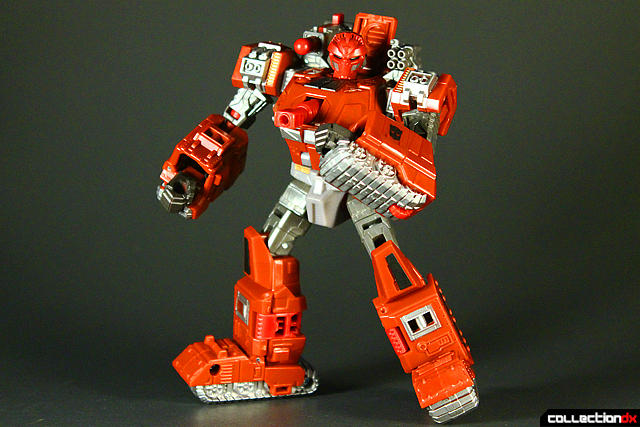 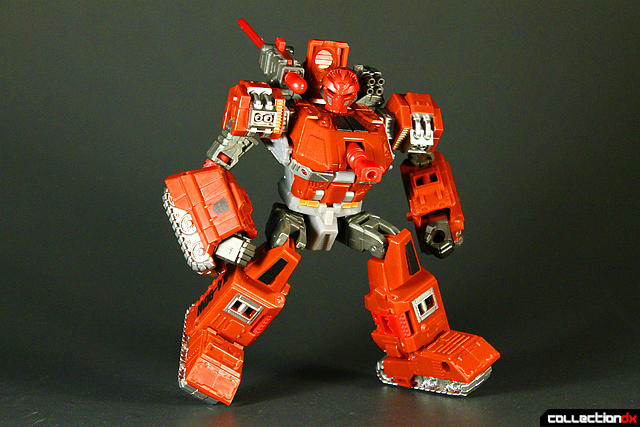 Not many Transformers can boast about having clean backs. Hasbro engineers did their homework on this one. 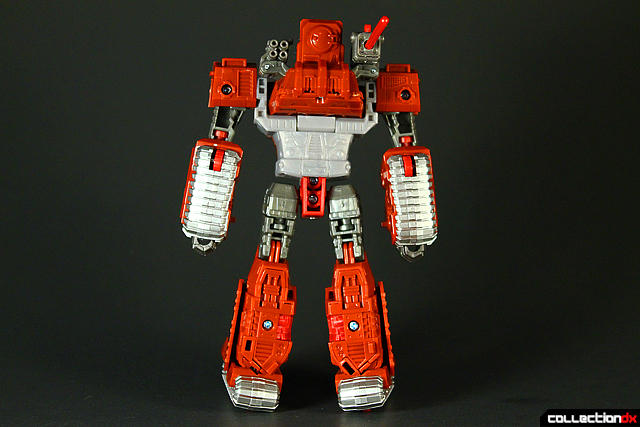 I really dug the Z0W-333 on the side of the leg which is actually stands for one of his sayings, "ZOWEEE!" 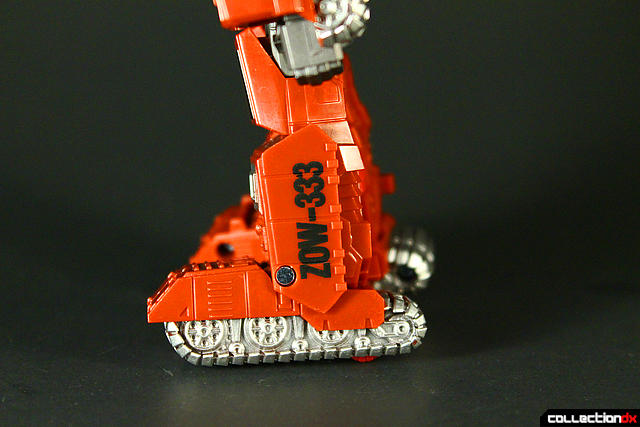 The other leg has K4-90W which stands for "KAPOW!", another favorite of his. 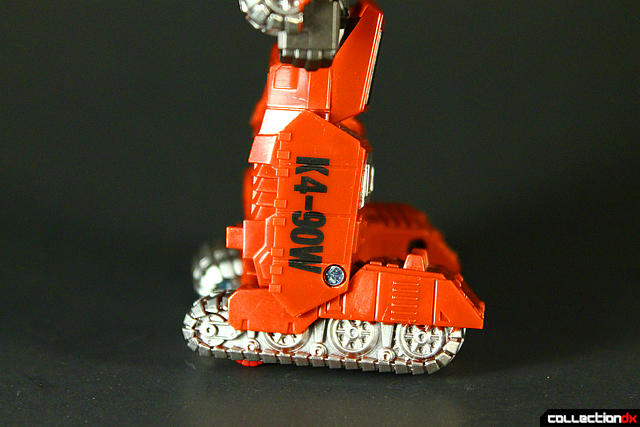 His head sculpt is faithful to the character. What I really love is the shoulder mounted cannon that shoots a spring loaded missile. 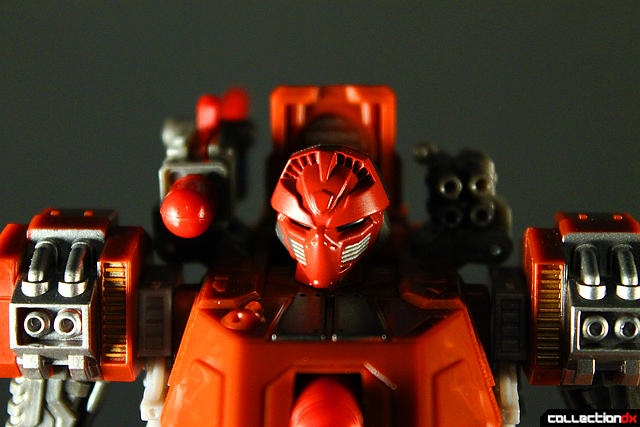 Give the button a squeeze and he unloads a rather long missile. 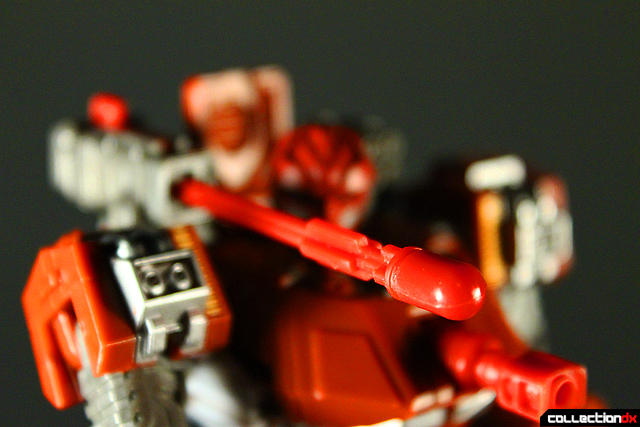 Warpath was originally hard to find, but I see recently that Toys R Us has begun stocking this guy in large numbers here in New Jersey. They must have found some old stock or Hasbro distribution has caught up.

6 comments posted
The new look is so awesome.

The new look is so awesome. BLAM!!!

Hope to get a warpath like that. The tank mode is also very cool. Reminds me of the apocalypse tank in red alert.

I love this toy. It and the Classics Jazz are probably two of the best transformers to come out in a long, long time. I hope classics/generations/whatever they call it come back soonish. They still owe us a Blitzwing to go with Astrotrain and Octane...

Overall a decent review, but I always preffer to hear the reviewers final opinion on a toy at the very end.

For me, Warpath is a great transformer that is one of the only Transformers to have show-faithful transformation that leaves him with absolutely no kibble (by far his selling point) , but a pretty boring toy. The weapons are forced and not well thought out as being undetachable. Also, his hand position makes it very hard to give him vast majority of modern-era weapons that use extra space behind the handle. Sadly the clip points are also a joke as many, many weapons will not work them due to their orientation unless they are on ball joints. Well, that and putting the at the front side of the toy in vertical position also makes it harder to weaponize him. Again, no detachable gun that you can stick into his hands makes his poseability only partly useful.

I hunted high and low for this bot before eventually getting it oh Hasbro's online store. The thing that really gets me is how it was planned to be remolded into Hardhead. Unfortunately that hasn't come to pass yet. Great figure, good review!

I love this toy. Crap I like the whole generations line. It got me back into Transformers again. Despite how much I like this toy though it still has some issues.
My biggest complaint about the toy is why the missle has to be so long? It really detracts from the look of the toy. Also I kind of wish he came with a gun for his hand. Wallas is right in that he is a litttle boring and I think some accesories would have helped with that.
Despite this I still like the toy as I do all the generations line. Faithful reimaginings of the old toys are just awesome. I only wish that they had done optimus as well as the others.....oh well I now have MP-10 for that. :)

love this figure, but dont like the head that much....wouldve prefered the G1 head sculpt a lot more.