Fritz is another sort of subsidiary character to be released by Sideshow Collectibles as a 12" figure. From the 1931 Frankenstein, Fritz was the hunchbacked assistant to Dr. Frankenstein and was ably portrayed by Dwight Frye. It was Fritz who was given the task of obtaining a brain for the monster and would bring back a criminal mind. This plot device was unique to the film adaption and was not in the original book or previous stage plays.

The doll is pretty good, but it lacks the distinctive hump on the back and the crouched over stance. You can probably place some crumpled up tissue under his shirt or something to help achieve this effect. 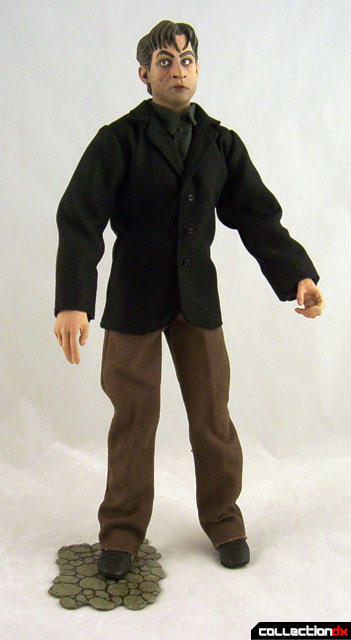 Fritz comes with a stone replica base, a walking stick, a plastic container with a removable lid and a brain to store in the container. The container is labeled "Normal Brain". If it were up to me, I would have made it say "Abnormal Brain" since that is the one he actually takes in the movie. Perhaps you can display it fallen at his feet. 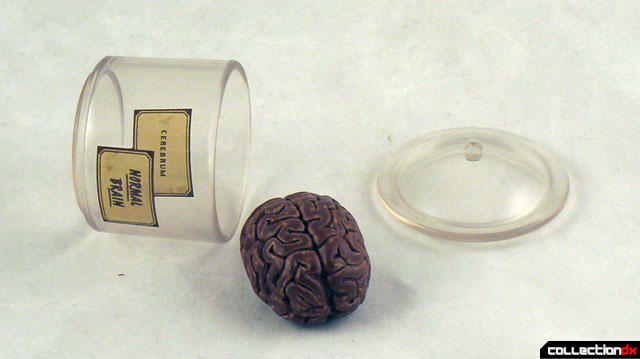 Besides adding a hump, maybe the only other way I could think to improve this figure would be to make the clothes look dirtier. I always think of Fritz as being filthy from digging up graves and what not. His clothes here look too new. Otherwise, this is a nice addition to the lineup and, unlike some of the other smaller characters released, he carried a nice price tag at only $20. Fritz was limited to 3,500 pieces. 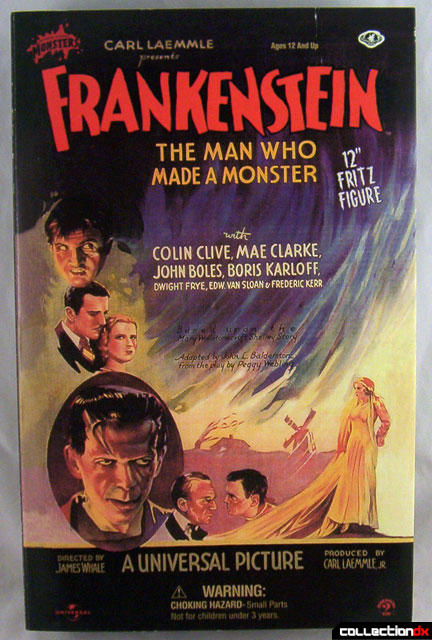 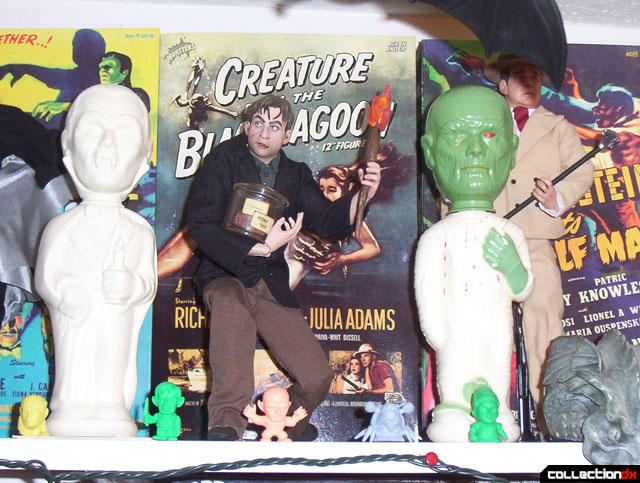 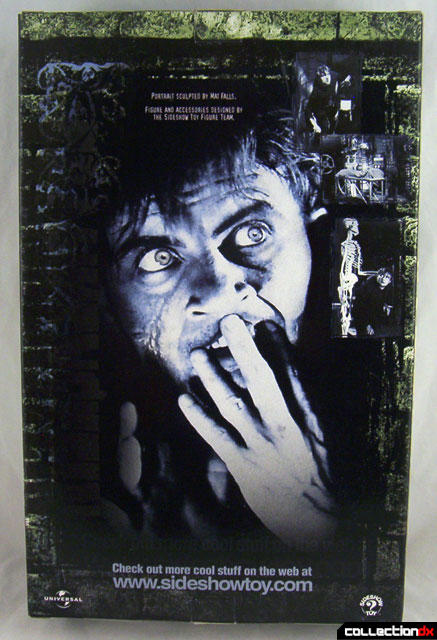 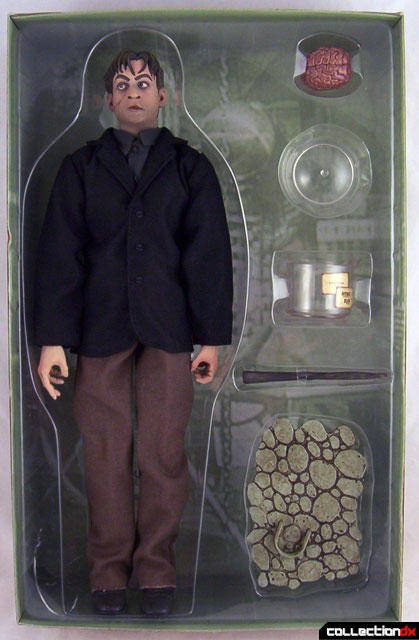 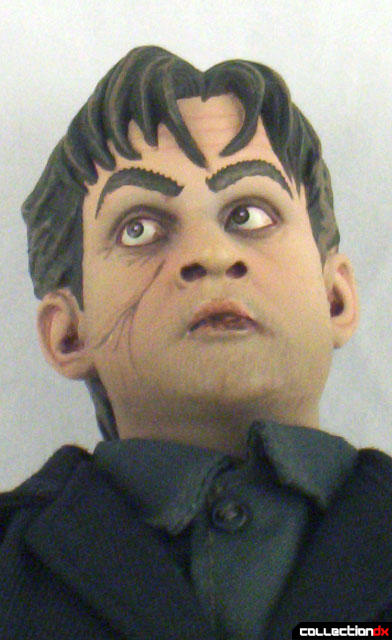 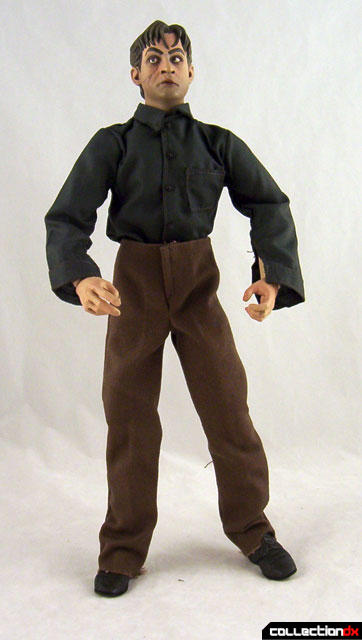 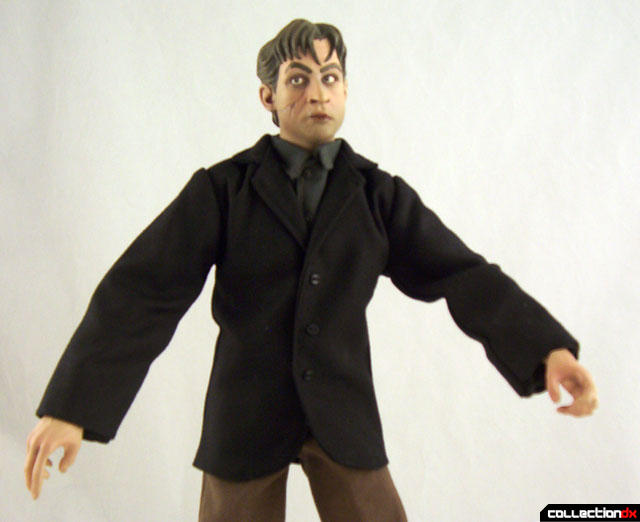 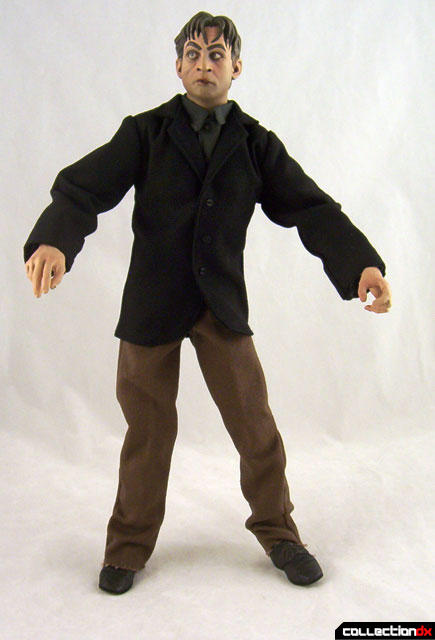 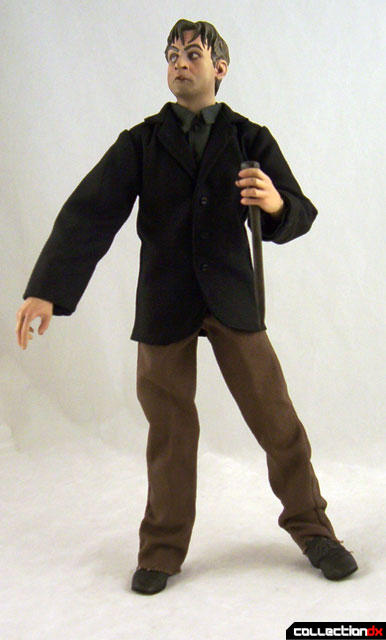 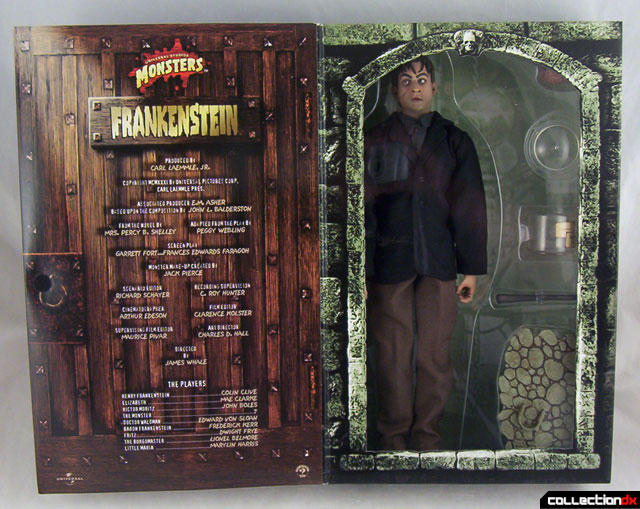 I never got the whole Fritz vs. Igor thing...

Anyway, don't you think you're being a tad kind with this review? I mean, other than the face sculpt, that's NOT Igor! To leave out some sort of hunchback look is pretty damn poor. The figure should be able to stand like this without tipping over...otherwise, why bother making this figure?

A much lesser offense, but an offense nonetheless, is the "normal brain". What? The prop that was on screen for a couple seconds before being smashed? The "abnormal brain" is the key accessory...that's just stoopid.

Also, I want a matching Marty Feldman from Young Frankenstein! Sideshow, are you listening!?

Not sure what you mean by "the whole Fritz vs. Igor" thing. What thing? Do you refer to the confusion between the two characters (that you're perpetuating here by calling Fritz ,"Igor"!) I'm not sure if there was an instance of a mad doctor having an assistant named Igor before Young Frankenstein came along and clouded the issue. I suppose the fact that both character were hunchbacked links/confuses them.

You are right though. I probably did go a bit easy on this one. I guess I just wasn't in the mood to really tear into it. Almost all of these Sideshow figures have something about them that aggravates me, yet as a whole I DO like them, so maybe I just didn't want to be overly negative.

Also, the original 12" Frankenstein DID come with an "abnormal brain" prop, so it wasn't that big a deal to me. But the lack of a hump is a pretty big omission.

One last thing. Sideshow DID release a Marty Feldman "Igor" 12" (along with the Monster and "Dr. Fronkenstein"!)

Haha...okay, so before this article, if you'd asked me who Dr. F's hunchback assistant was, I would've sworn that it was "Igor"! And, no, the confusion came way before Young Frankenstein (in fact, in that movie, if you recall, the joke actually depended on the audience assuming that Marty Feldman played a hunchback named "Igor"...hence the humor of "Eye-gor" to Wilder's "Fronkensteen").

Wasn't I just IMing you last week about how weird it was that Sideshow hadn't made a Dr. F or Igor 12"? I had no idea this toy existed...

So, I think we just have another case of a later character creating the lasting impression in the media, let alone people's minds (just like everyone thinking of Kharis, rather than Imhotep, when someone mentions "the Mummy").

I thought I posted this but I guess I forgot. When I finally started displaying my 12" monsters, I added some padding to Fritz' costume and managed to hunch him over a bit with the help of a doll stand. Add the torch from the 8" Frankenstein and now he looks pretty good, imo.