Does anyone remember a few years ago when the Transformers Alternator/Binaltech line was released? If so, then you'll also recall the sudden appearance of a line known as the "Roadbots" at around the same time. Even though the Roadbots are obviously based on the Binaltech line, I don't consider them knock offs because all of them are unique designs. To the best of my knowledge, none of the Roadbots have any die-cast metal in them. Instead of Transformers they're more like "Parts-formers." Even though some of them come with a lot of accesories (especially the bigger ones) most of it is just car kibble. Also, there's absolutely no place to store weapons and armor pieces unless you get lucky/creative, but even if you do, you'll only be able to store one or two things. So have a plastic bag or one of those storage containers with the pull out drawers ready. The scales range from 1:12-1:32 unfortunately for all of you who are so worried about scale, it's completely random. Matter of fact, there's a motorcycle that's much bigger than a hummer and an SUV that's smaller than a car. This may bother some people (not exactly sure why) but I have no problem with it. In fact I find it to be very funny. After all, isn't the whole point of collecting is to have fun and enjoy yourself?

The Roadbot that I'll be reviewing today is named "Ford GT" which is also what he transforms into.

What surprised me is that he even had some package art done which is a rare thing nowadays.

His accessories include: the top front and top rear of the car mode, two side pieces, part of the front grille, the rear license plate/exhaust ports, a light-up sword base, two different styles of clear sword blades, a handgun, a Gatling gun/shield combo, and a very intimidating looking battle axe.

The vehicle mode rolls smoothly and the wheels are made of some kind of rubberized plastic. 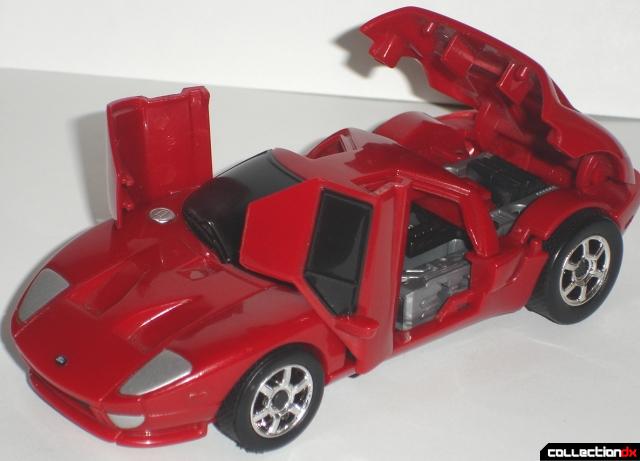 The doors and trunk open up and as I said earlier, don't bother trying to store anything. 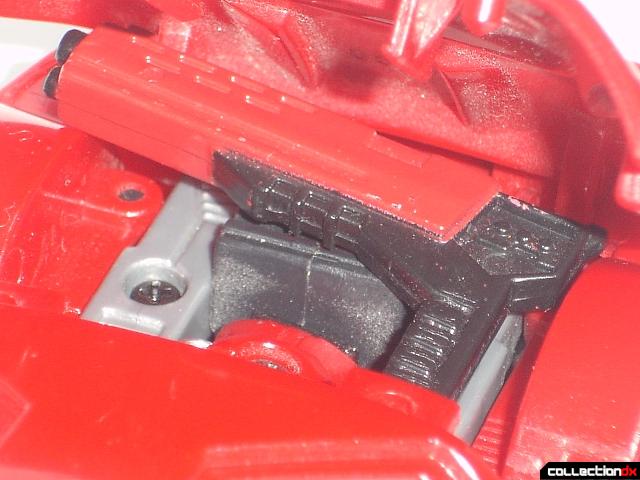 I was surprised I could store his hand gun inside of his trunk. 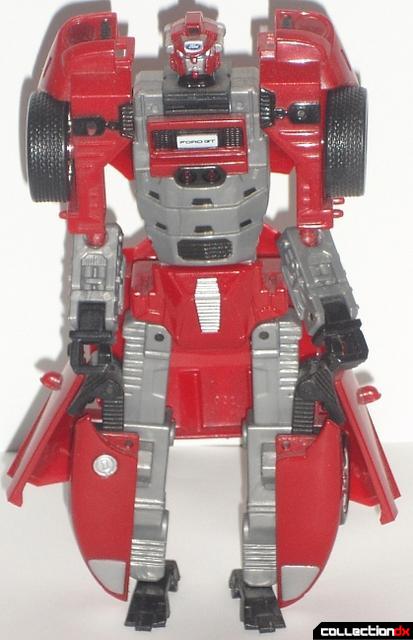 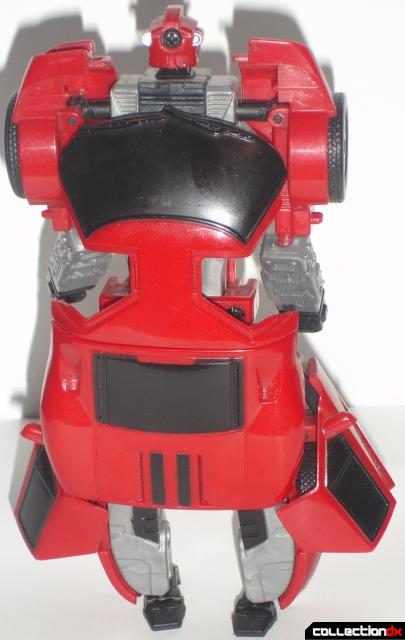 With his weapons and car parts attached, Ford GT's robot mode is sleek and streamlined just like his alternate mode. 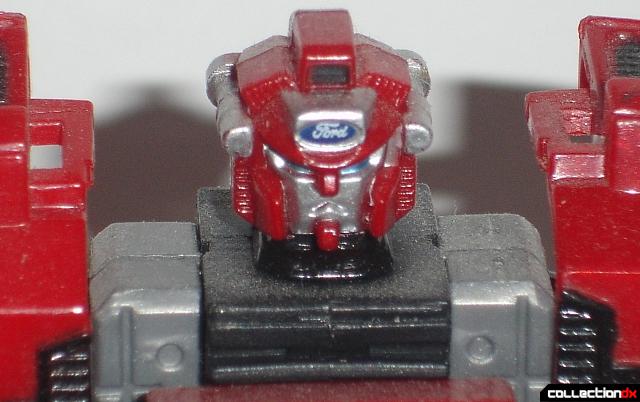 Here is a close up of his face. Note the Ford logo on his forehead. 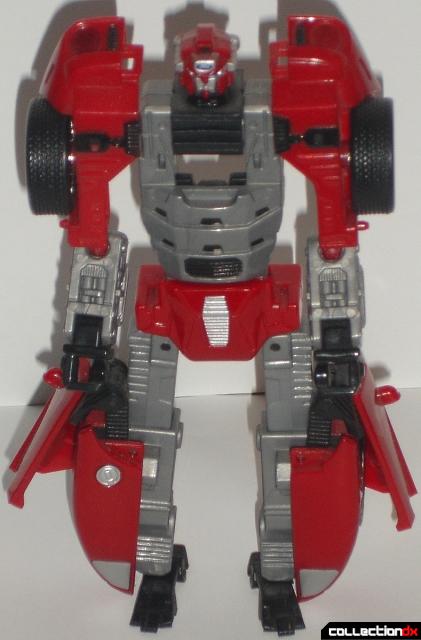 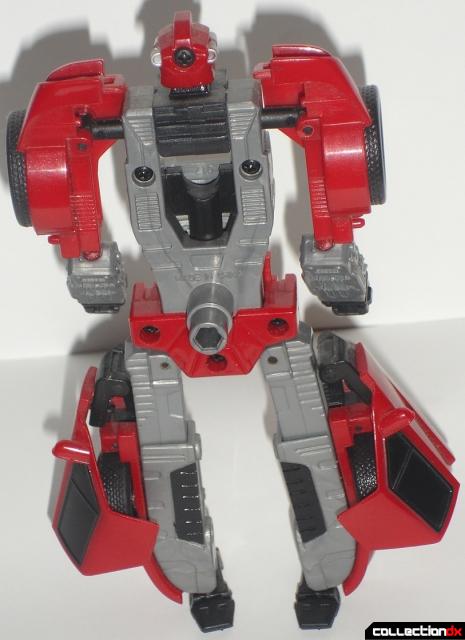 Without all his gear on, he just looks down right pathetic. One downside to partsformers is that if you lose just one single important piece (like the entire top of the vehicle mode for instance) that just throws the whole thing off. 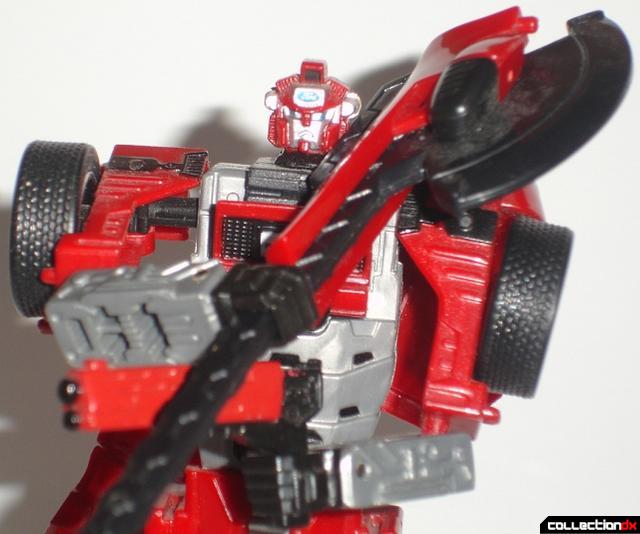 The battle axe fits nicely into his hand and looks intimidating. 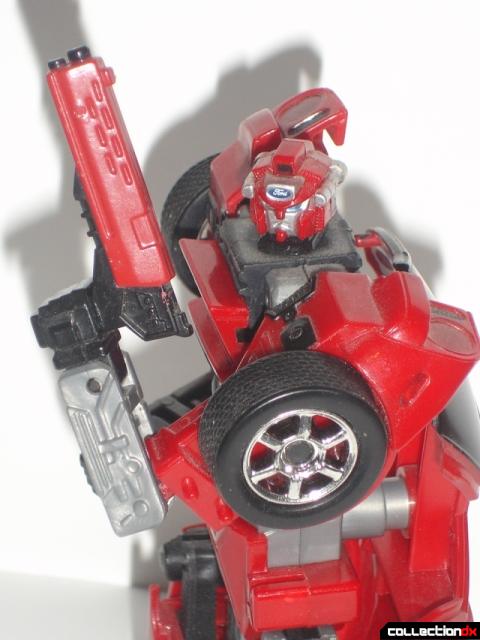 The handgun is nice and compact and Ford GT has the articulation available to use it. 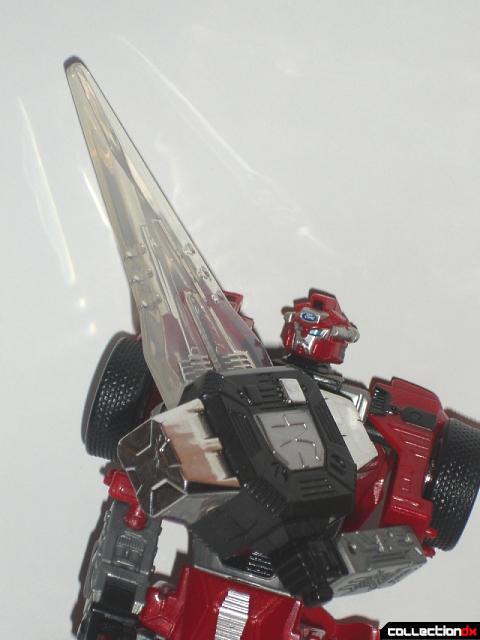 Here is the light up sword with the long blade attached. 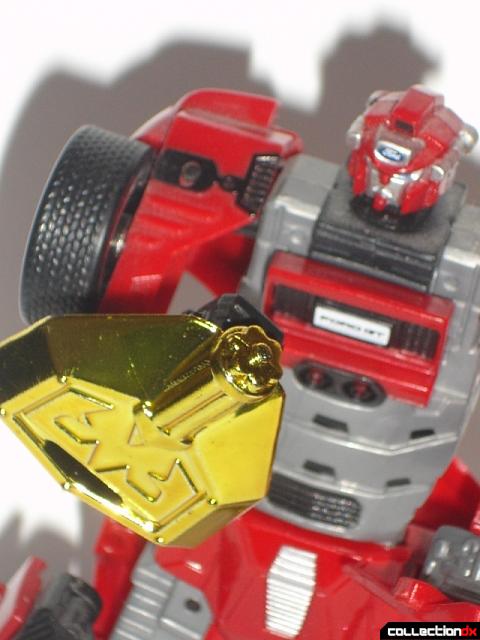 As mentioned before, he comes with a shield that is also tipped with a small Gatling gun. 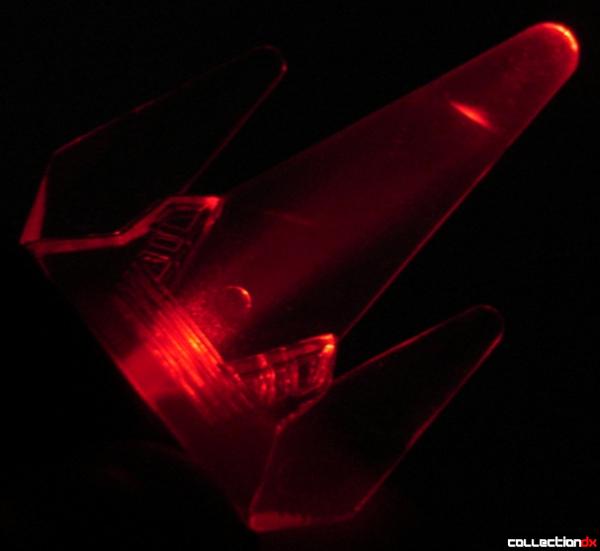 A nice little touch is a light up weapon with two different clear blade attachments. In the dark, it makes for some very cool photos.

For an off brand line of transforming robots, I can't recommend these enough! Great detail, good articulation, and oodles of accessories, you just can't go wrong with these guys! Before I end this review, I'd like to warn everyone about something if you plan on collecting Roadbots. There is a company that makes knock off versions of these. They're called "Metamorphs" or something like that and they come in sizes from about 6 inches to about 14 or 15 inches. I've seen them at places like Rose's, Family Dollar, Dollar General, etc. AVOID THESE LIKE THE PLAGUE!!! You can tell how bad these things are just by looking at them through the packaging. A few that I've seen were even broken or very, very loose. I know I collect knock offs, but there are things I've seen out there that I feel I'm better off just leaving alone...

2 comments posted
Do you have the bigger ones?

Do you have the bigger ones?

The only big one I have is a Lamborghini Murcielago in 1:18 scale.