Rounding out the team of deluxe-class Protectobots is resident medic and (sometimes) pacifist, First Aid! Much like Streetwise, he is a heavy retooling of an existing figure, which in this case is Stunticon Offroad. And like his Autobot teammate, First Aid has a very distinctive look and feel despite being a remold. 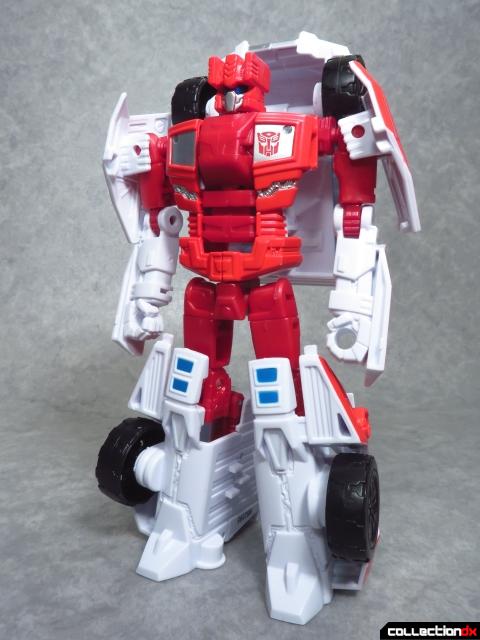 The design of First Aid adds a lot of extra bulk to Offroad's relatively svelte frame. He stands about five and a half inches tall, as per the standard for Combiner Wars deluxes. 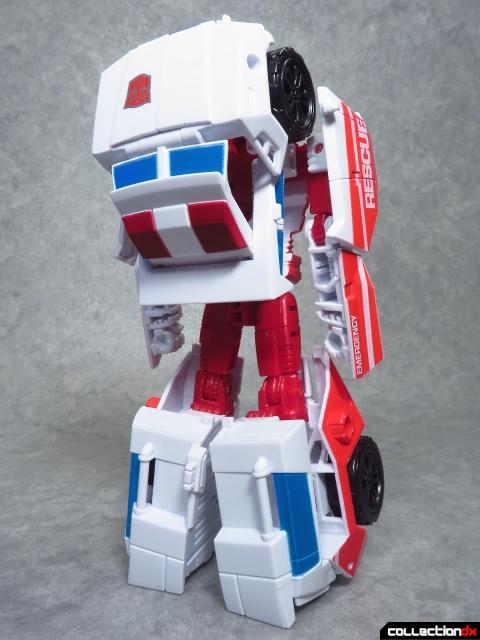 While this iteration of the character turns into a boxy SUV, he still manages to evoke the look of the original G1 toy, with large shins and a big chunk of the vehicle mode forming a folded back hoodie. 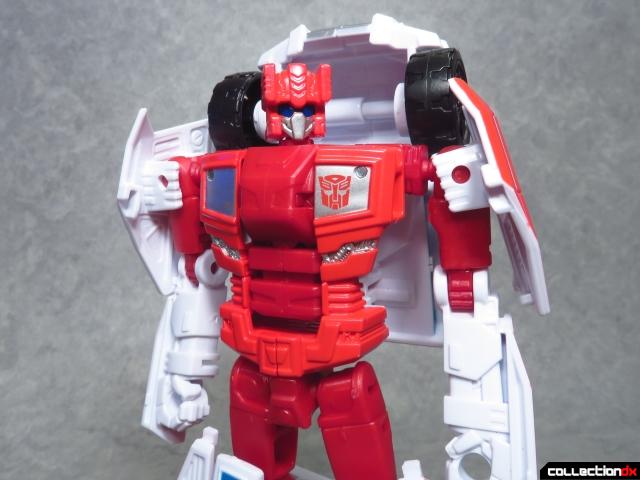 As with most of the Combiner Wars figures, First Aid's head is a minor update on the classic G1 design. It's a blocky noggin that still looks like it could be plugged into a old style Scramble City combiner. With his gentle blue visor and silver faceplate, I can almost hear Michael Bell's calming voice right now... 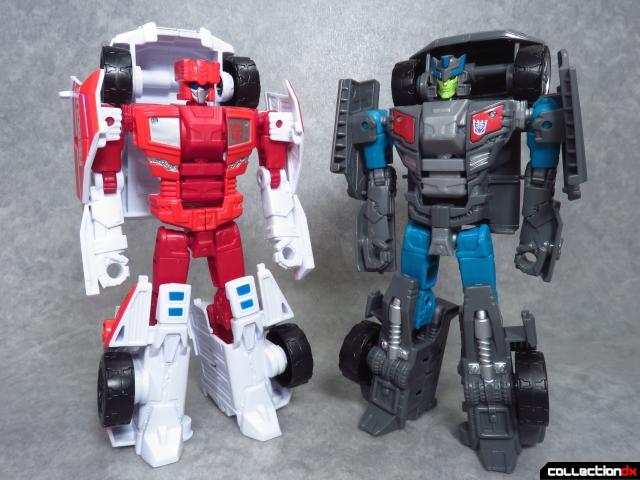 Here is First Aid with his Decepticon counterpart, Offroad, and the differences between the two are readily apparent. While they do share the same engineering, the common parts are limited to the combiner joint, upper arms, thighs, and hip assembly. 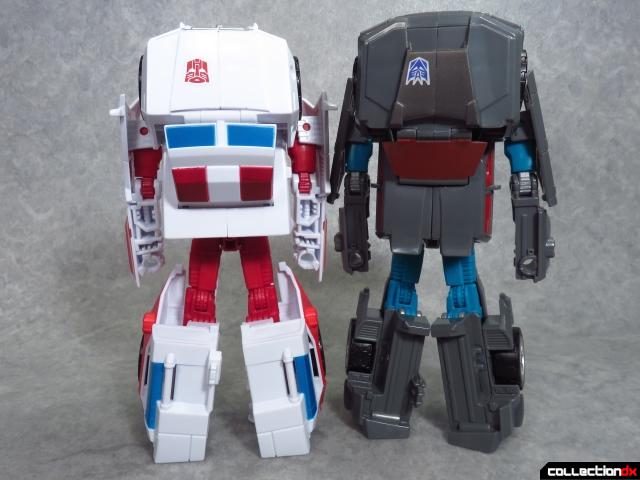 He's very much a total re-shell of Offroad, which goes a long way towards making both toys feel distinct. 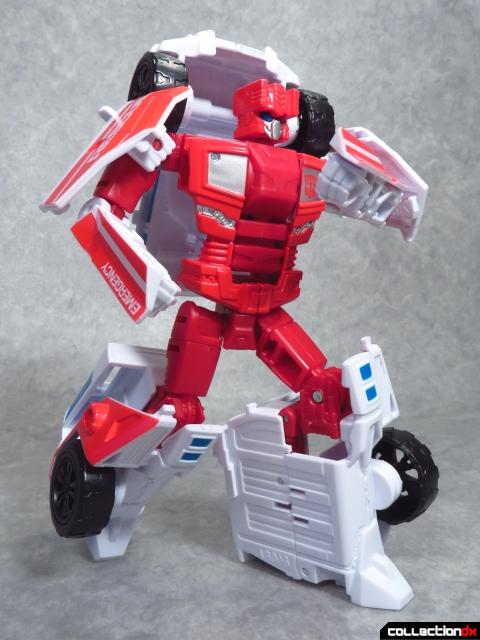 First Aid's articulation is every bit as good as Offroad's, even with his added bulk. He's ready to rush off and help both civilians and his fellow Autobots.

One thing that does seem to bind both toys together is the plastic budget they get to work with. So while First Aid may have a bit more volume than Offroad, the former has a few visible holes through his body. It's a minor blemish on what is otherwise a good toy. 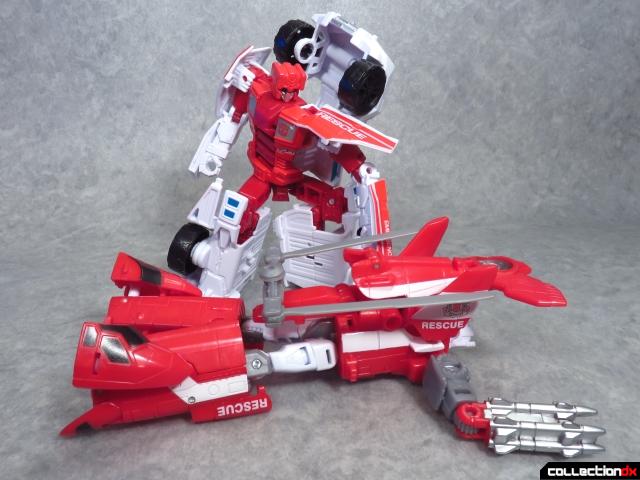 "Now Blades, did you try to arm wrestle Razorclaw again?"

"The only thing that hurts more than my actuators is my pride... oooooh..." 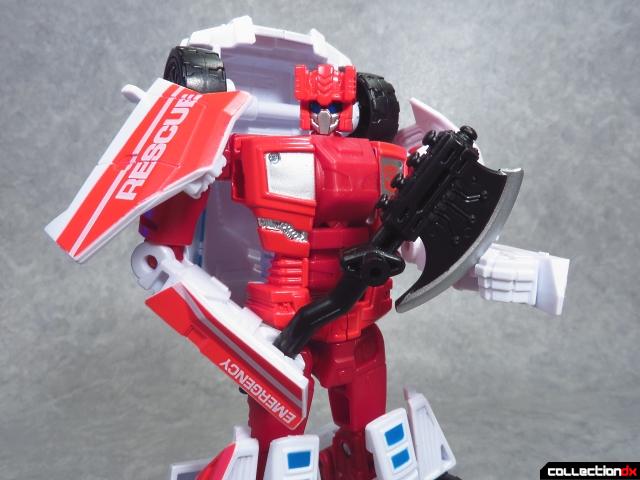 Also, First Aid comes with the same weapons as Offroad, which means this team healer is toting around a hefty melee weapon. Now, you could say it's like a fireman's tool for breaking down barriers, but I prefer to think of it as First Aid's patented medical ax. 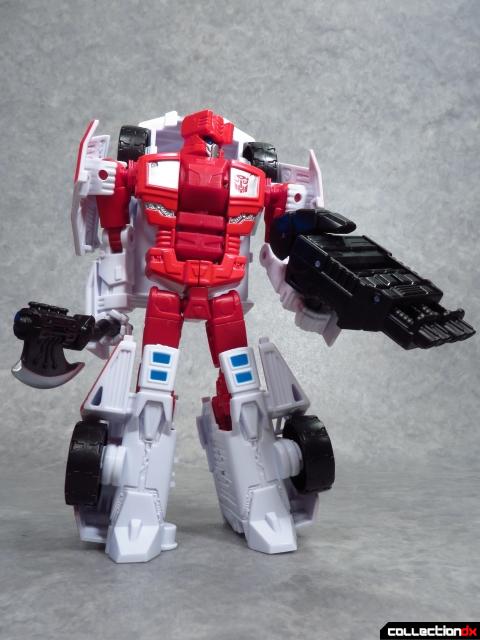 The engine block style combiner accessory gets a slight makeover in shiny black plastic. I suppose it's nondescript enough to pretend that the gun is some kind of generic sci-fi medical thingie. 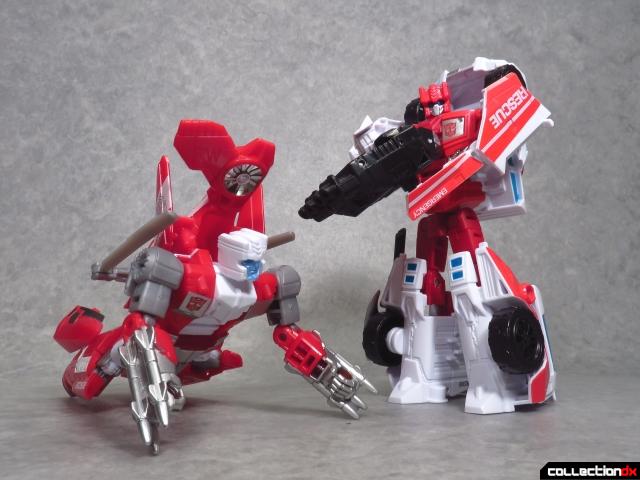 "Hmm... Looks like the multi-scanner says most of your joints are fused. I guess we'll have to amputate." 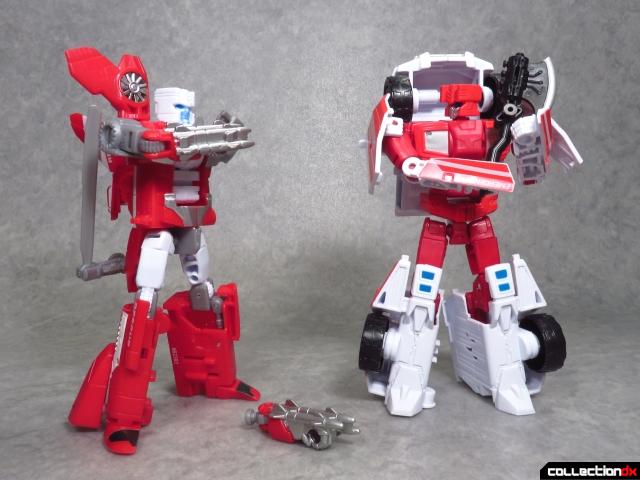 "OW! I'm a robot for Cybertron's sake! You should have just detached it!"

"Trust me. The medical ax is a far more efficient method of initiating a limb replacement."

First Aid is the most well-armed pacifist in the Autobots. 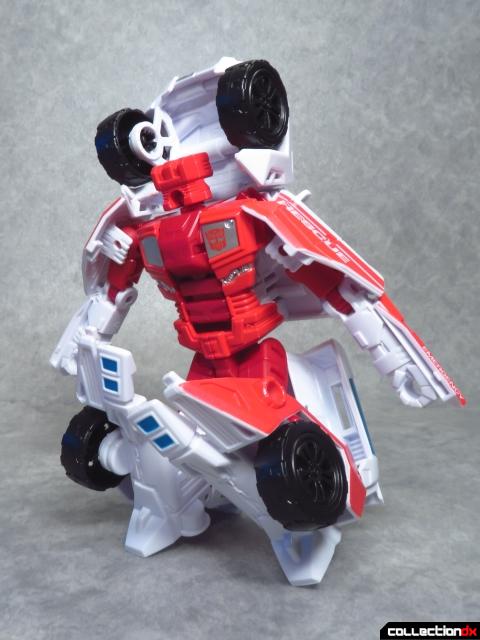 Transformation-wise, First Aid mostly follows Offroad, but has a more specific order of operations. You need to collapse his legs before putting his arms in, because of how First Aid's forearms slot over some tabs near his knee guards. Also, the front of his vehicle mode has large tabs that go into slots on either side of First Aid's head. While nothing feels fragile, you will want to be more mindful when converting this Protectobot to and from vehicle mode. 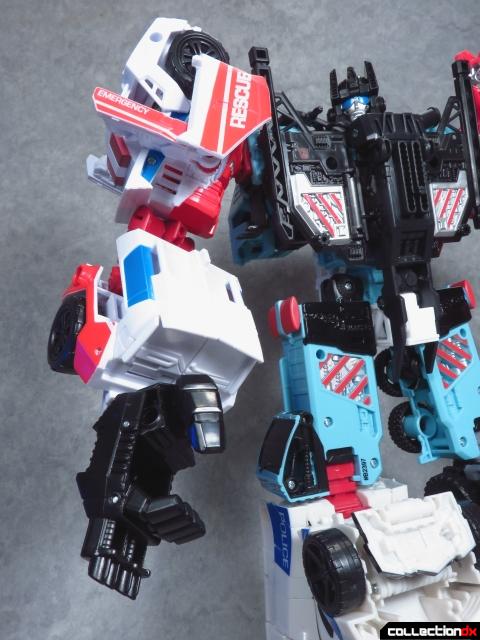 First Aid makes for an especially beefy arm, and actually looks noticeably larger than his limb-mate, Blades. The Autobot manages to improve on some things Offroad did, such as having more functional locking points for his own arms. 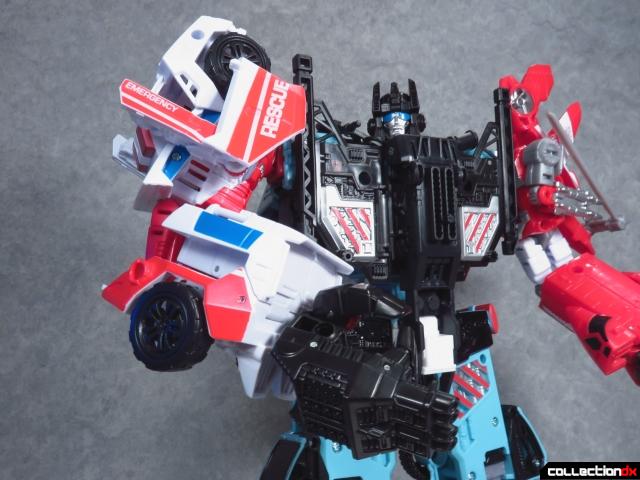 He does a good job at being an arm, but has a more limited elbow due to how bulky his is. Also, First Aid's arm shields can still get hung up on parts of Defensor. 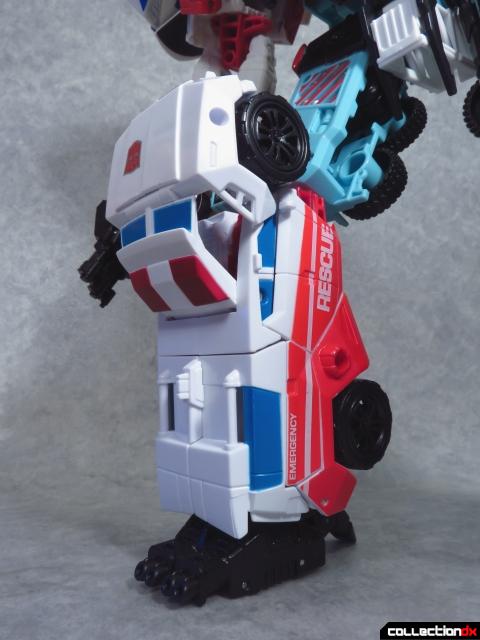 Leg mode is pretty straightforward, and offers Defensor a chance at looking like his old G1 box art. Just mind the truck-front knee guard, as you may have to move it out of the way if you use the mid-leg swivel joint. 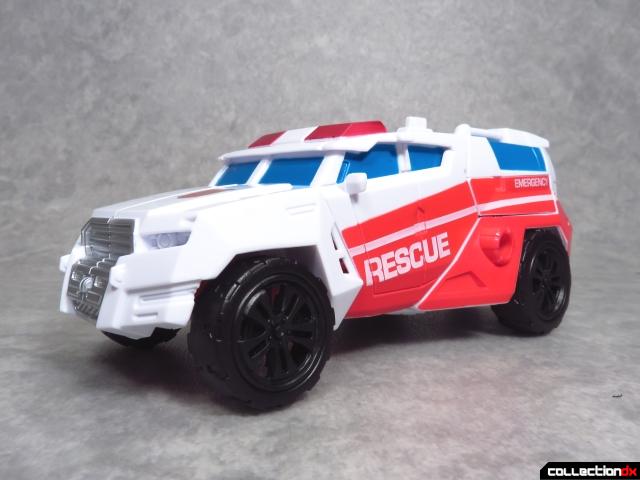 First Aid becomes a tidy little SUV in vehicle mode. No longer a simple van ambulance, he is now a kind of first response type truck geared for ALS rescue. 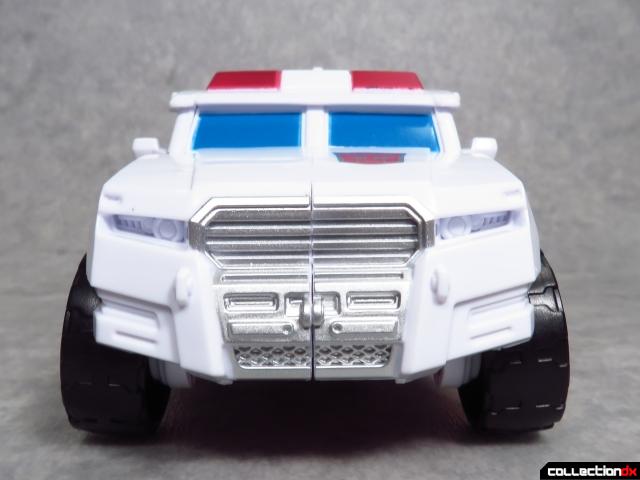 He doesn't appear to be based on any particular truck, but still has all the appropriate details (that are begging for paint). 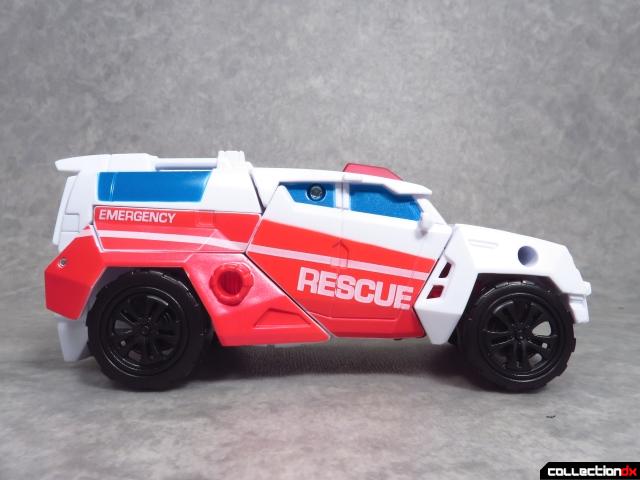 A few tampographed markings round out the Hasbro-approved package. 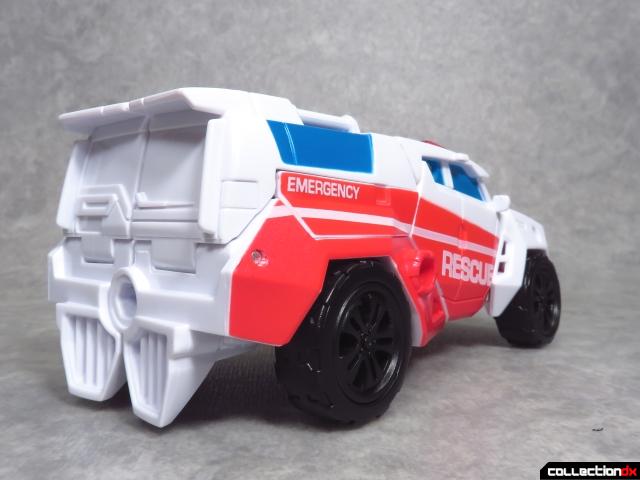 It'll be interesting to see what TakaraTomy does to make First Aid more show-accurate for the Unite Warriors release. 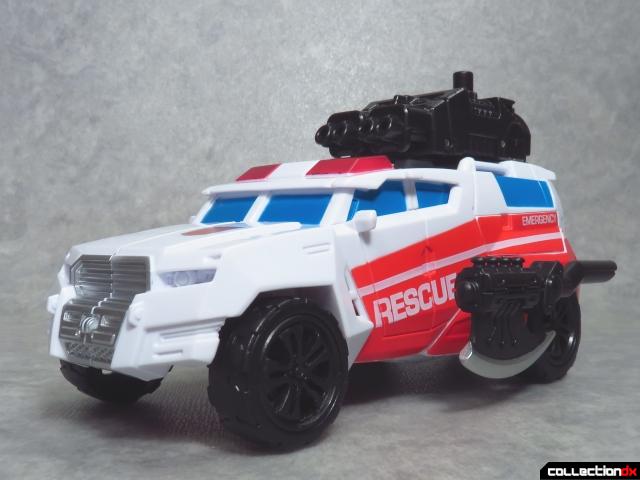 Like Offroad, both of First Aid's accessories can be stored in vehicle mode. The effect isn't quite as cool, what with the combiner gun being top-mounted instead of inset in a truck bed. However, this is fairly evocative of the G1 toy and at least gives you a way to keep everything together. 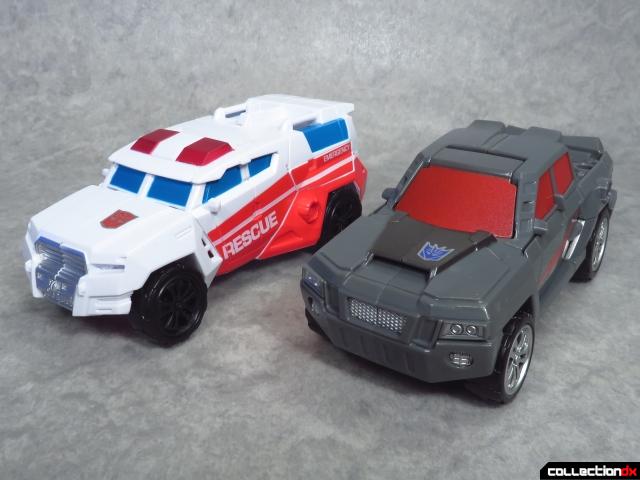 And speaking of Offroad, putting him beside First Aid in their respective truck modes makes the full extent of the changes as clear as day. 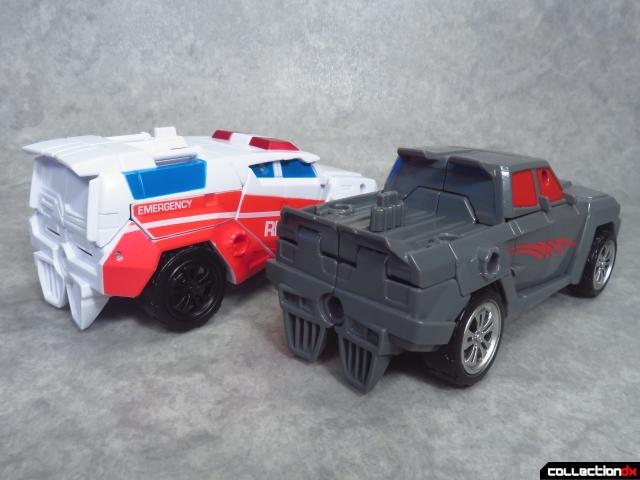 You wouldn't be able to swap parts with these guys and still have them transform. They're that different. 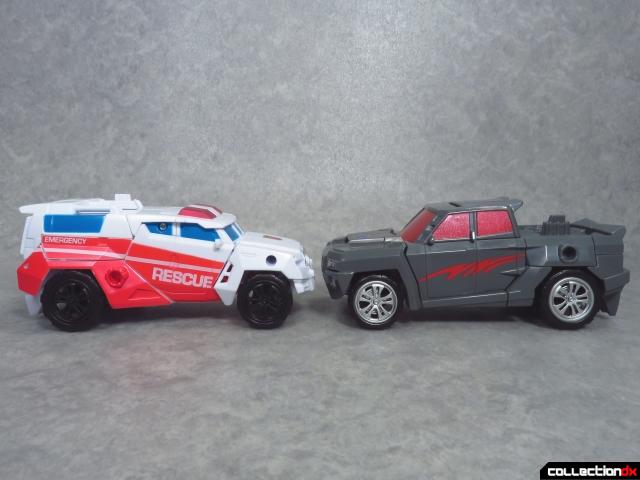 The only visible thing that is shared between both toys are their wheels, and even so, First Aid's lack of colored-in rims (argh) help set him apart.

First Aid is a nice little toy and an necessary part of the Protectobots, but he is, admittedly, the least exciting member of the team. Still, he's quite charming for what he is, and he wields a mean medical ax.

Very cool! Like you pointed out, his accessories are the result of being a retool. But it also fits his character in the IDW comics. He's had some violent experiences over the past several years. He's still a pacifist, but he struggles now.

Q: Why can't Defensor punch things with his right arm?

A: Because First-Aid is a paci-fist!