When War For Cybertron was announced a few years ago I was immediately excited at the possibility of having some of my favorite Transformers characters designed in this new style: Shockwave, Jetfire, Perceptor, Onslaught, and Razorclaw. Although we still haven't seen a War For Cybertron or Fall Of Cybertron Predaking, four out of five isn't too bad. Shockwave was one of the preorder exclusive characters available in multiplayer and was later available through DLC as well along with several other neat characters. He even got a relatively amusing commercial as well from GameStop:

There were a lot of designs from the original War For Cybertron game that were fantastic and screamed to be turned into toys. After the initial run of WFC figures was over, however, it was pretty safe to assume that the possibilities of getting any of those other characters like Jetfire, Air Raid, or Shockwave were little to none.

And yet, two years after the first War For Cybertron game comes the sudden announcement of a sequel to the pretty fantastic Transformers game. Although the news of a new game was exciting, the promise of more toys was even greater. One of the initial toys announced along with the Cybertronian Jazz and Optimus Prime was Shockwave, one of my favorite Transformers characters of all times.

Like most Cybertronian alt modes, Shockwave's is a flying-jet-gun looking thing. It looks sleek, and almost aerodynamic. It's actually pretty reminiscent of G1 Shockwave's gun mode. 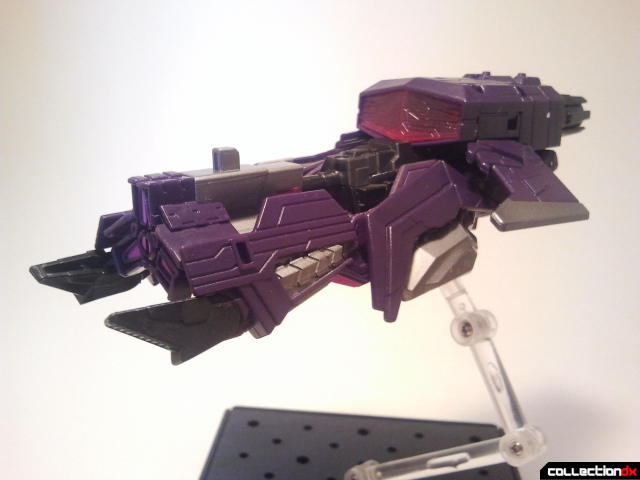 Shockwave does a nice job of integrating his weapon into his alt mode. It forms the middle section of Shockwave's jet and locks in place using a few pegs. 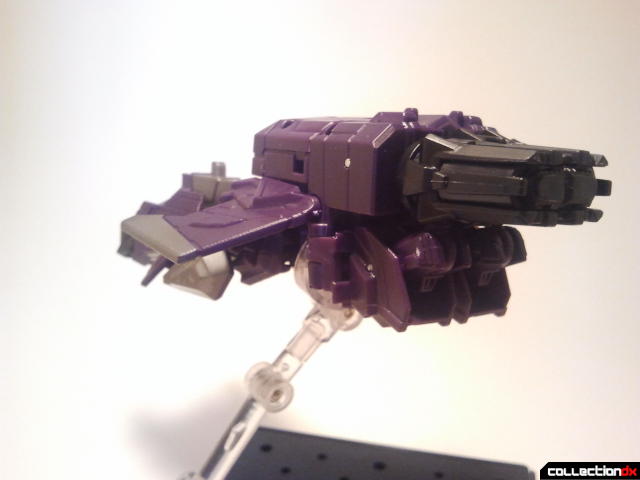 As a nice touch, Shockwave's head is even molded into the top, peaking out as he looks around where he's flying to. 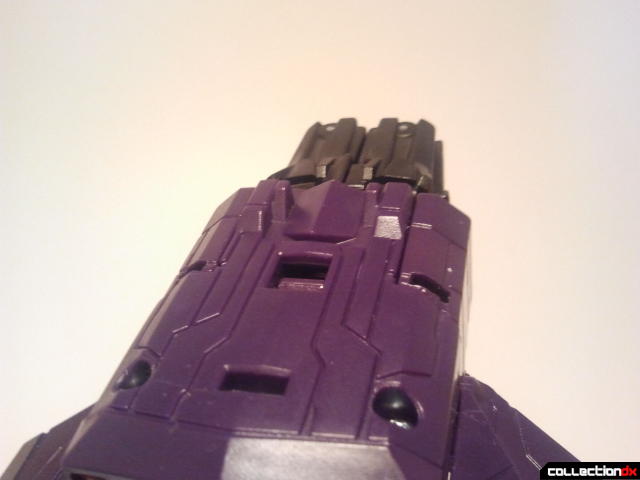 By virtue of the way Shockwave is designed, you can actually reconfigure Shockwave's alt mode into various different ship designs. This is a nice unintended bit of play in Shockwave that will help differentiate between Shockwave's remold coming down the line: Fireflight. 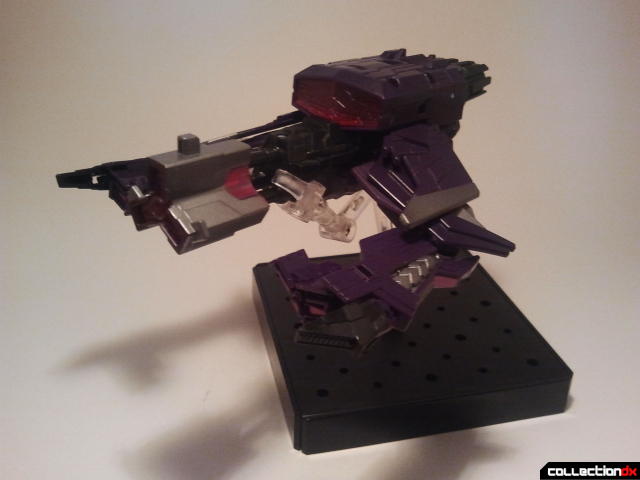 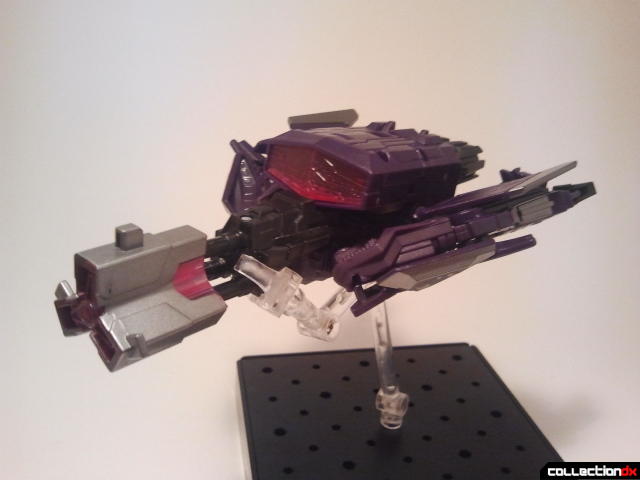 Shockwave's transformation is much more difficult going from robot mode to vehicle mode. The other way around, though, is pretty intuitive and easy. Not a lot is actually happening, aside from unfolding the arms and flipping the chest. The first step is to remove Shockwave's gun and straighten out his legs. You're practically halfway done. 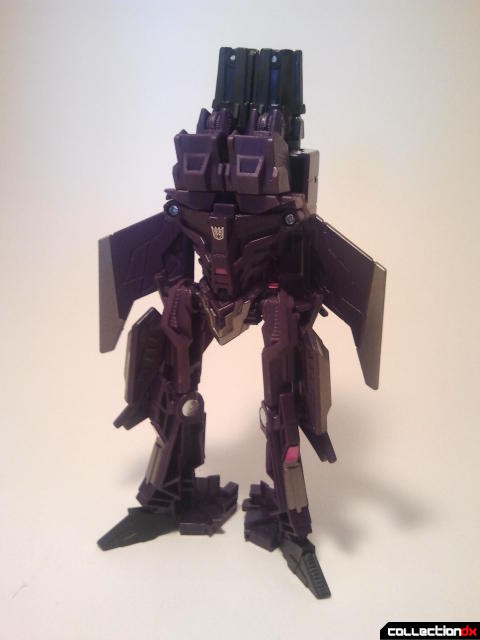 Next is to unpeg the arms from the back of the chest and unfold the arms entirely. 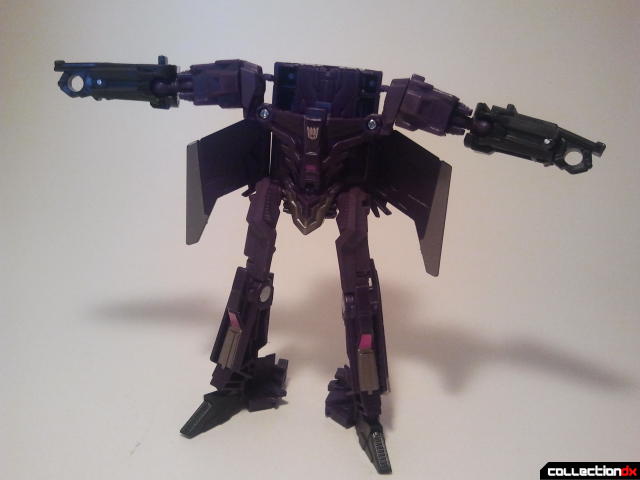 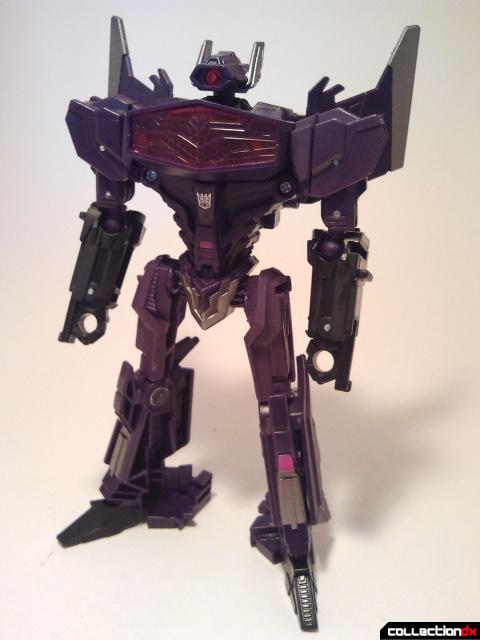 Shockwave in robot mode looks blocky, yet lanky. Like a lot of the various War For Cybertron toys, he is covered in sculpted detail and sharp edges everywhere. I particularly love the sculpted clear plastic detail along with the sculpted spine on his back. 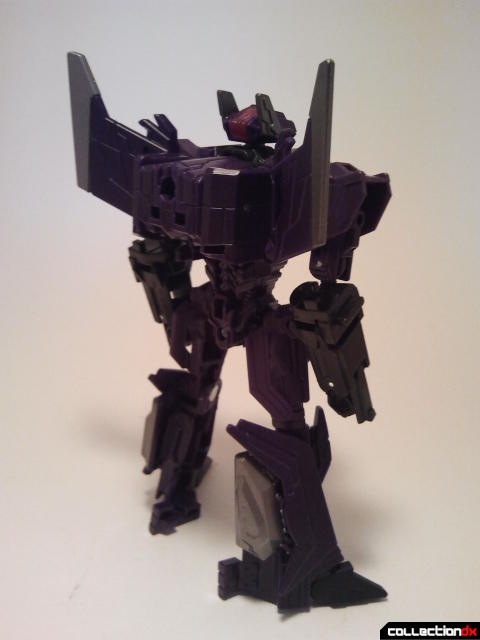 Shockwave has some fantastic light piping that absolutely glows with even the slightest bit of light. In the tradition of all modern Shockwave toys, the Fall Of Cybertron version continues the trend of perfect light piping it seems. 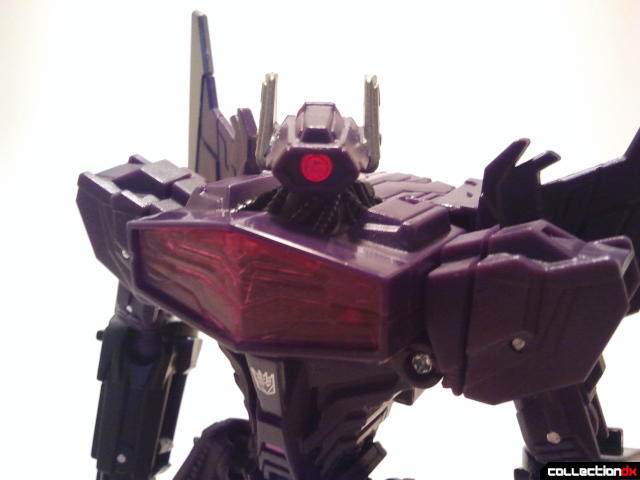 The articulation on Shockwave is pretty basic, but effective. His arms are technically double jointed because of the additional swivel for transformation. He has ball jointed hips and an additional swivel and knee joint as well. Shockwave's head is unfortunately just as swivel, but it still works pretty effectively. 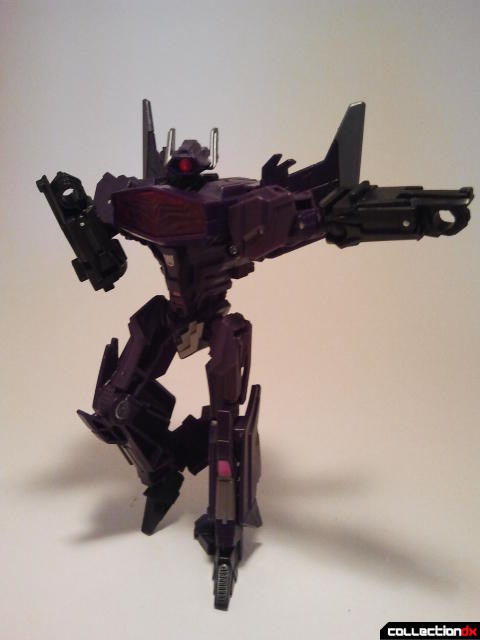 Shockwave's weapon is coincidentally my favorite gun from the first game: the Photon Burst Rifle. The triple barreled gun is well sculpted and part of the barrel is even clear plastic. 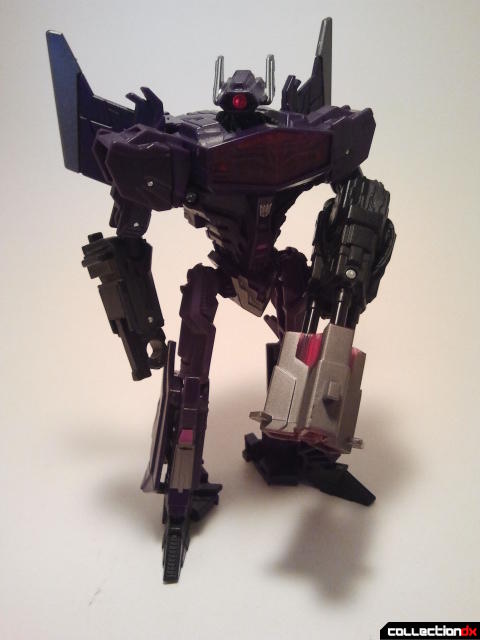 For some reason the bottom of the Photon Burst Rifle is removable. I don't really know why. 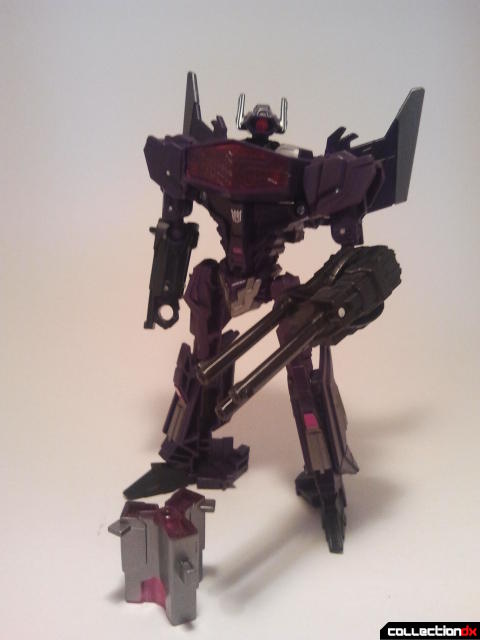 If you want, you can even place the gun on Shockwave's back for storage. 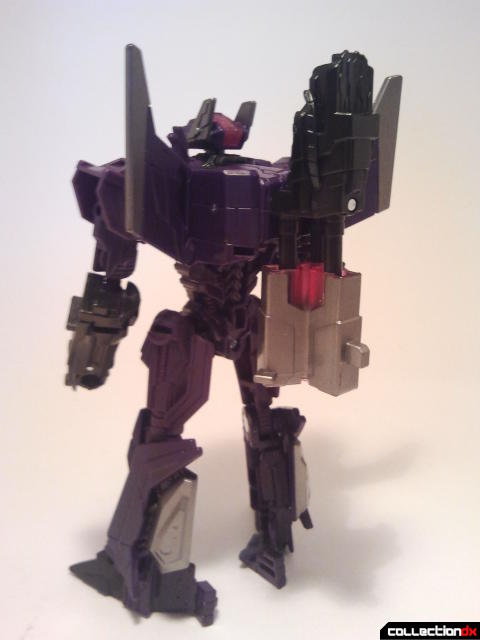 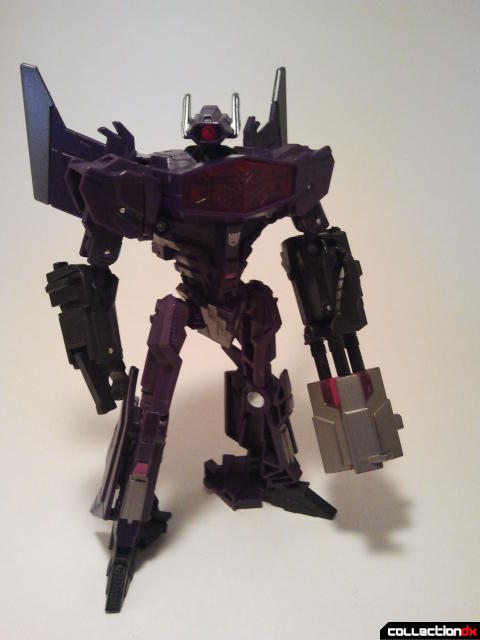 Shockwave looks good just holding his gun up or pointing his weapon dramatically at any targets. 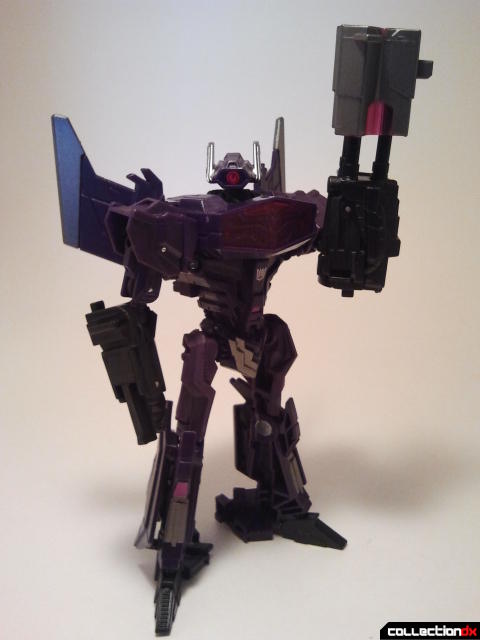 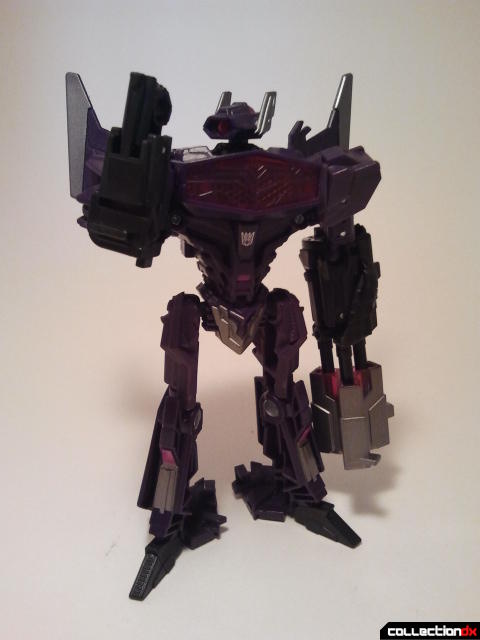 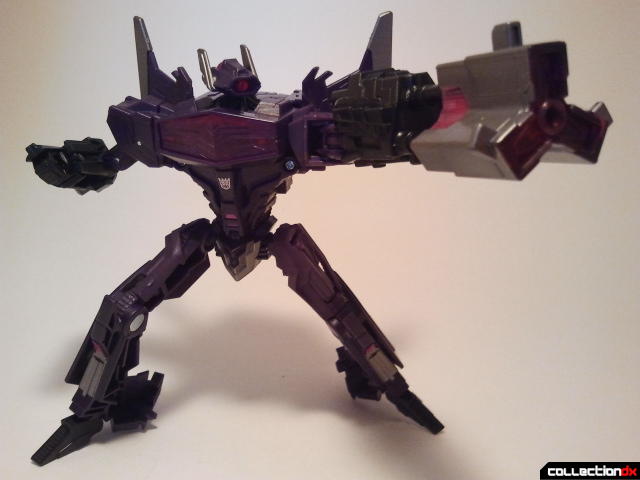 Shockwave is one of those toys that I've been eagerly awaiting for years and thought would never be made. To think that it is now in my hands is almost surreal. As the Generations line returns in 2012, Fall Of Cybertron Shockwave is an excellent first wave toy that promises loads of cool Classics-styled Transformers in the future. If you see him definitely pick him up. It is only logical. 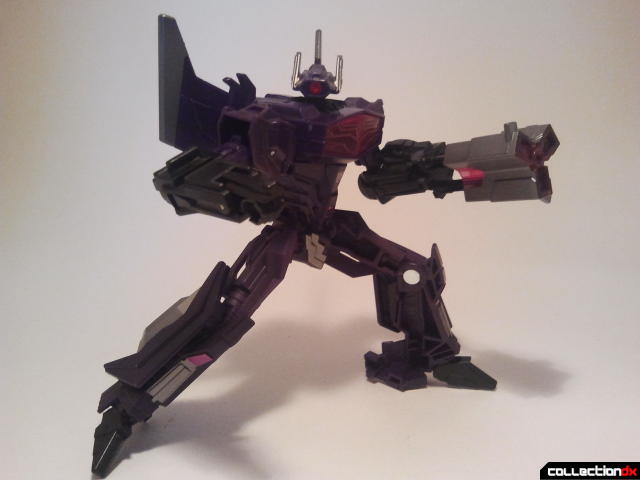 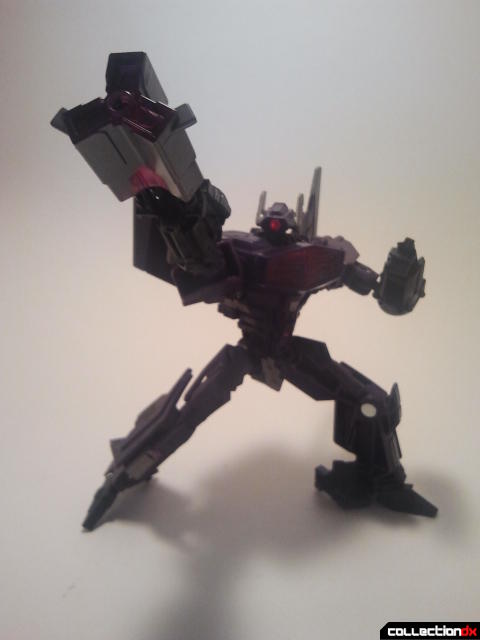 2 comments posted
this is the first Transformer

this is the first Transformer I've wanted in a while. haven't played the game but something about the vehicle mode seems really cool to me.

Hmm...if you're like me, I got a good hunch it's because the vehicle mode captures the spacious, dimensional feel of a space battleship.