One of the first trailers we got for Transformers: Fall of Cybertron was a very short black and white trailer of a hulking robot dragging a giant sword along with him before violently jabbing the sword into the ground and transforming into that ever so familiar dinosaur mode. From then on fans of the first game knew one thing for certain: Grimlock was on the way.

Of course, what fan would be satiated just by playing as their favorite Dinobot character in a video game? They wanted toys too! Hasbro did not miss this opportunity and made a Generations Voyager mold of Fall of Cybertron Grimlock.

Out of the box one of the first things I noticed was that Grimlock was actually surprisingly large. In a day and age where Transformers toys are getting smaller and smaller, Grimlock has managed to retain his size quite well and feels pretty substantial in hand. Compared to his buddy Shockwave, he's quite towering over a smaller Deluxe toy. In the case of Grimlock, I think the smaller toys are a good thing because they actually make Grimlock look even bigger. 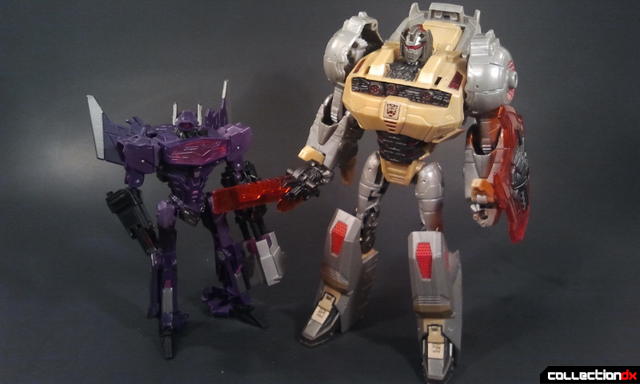 He does a fantastic job of maintaining his traditional design aesthetic while mixing in several new elements like a much broader shoulder and huge chunky arms. 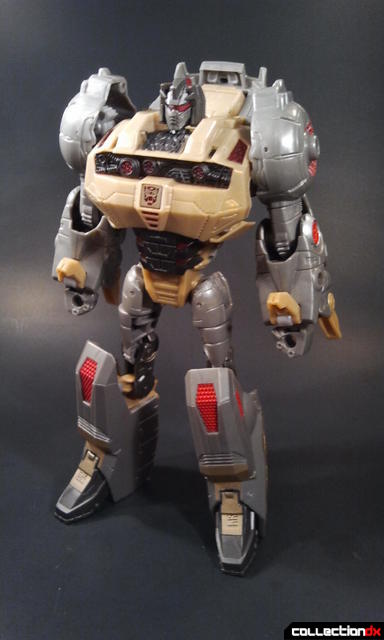 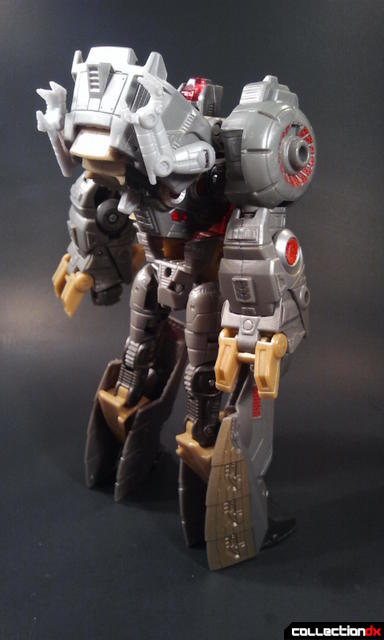 The headsculpt has some fantastic bright red light piping and the angular visor makes him look suitably angry. 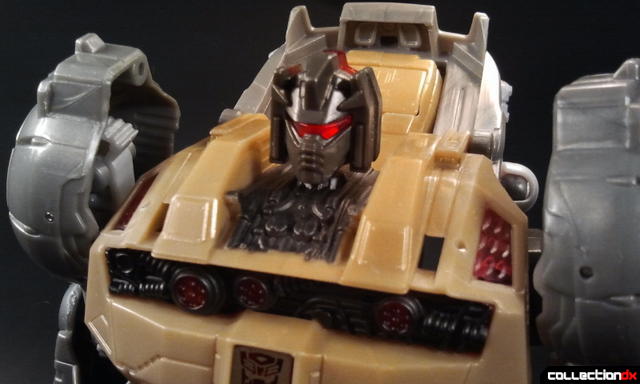 Another nice detail is that on his chest he actually has the Dinobots logo, or Lightning Strike Coalition as they were known. In addition to the sculpted chest detail he looks suitably layered and well sculpted. 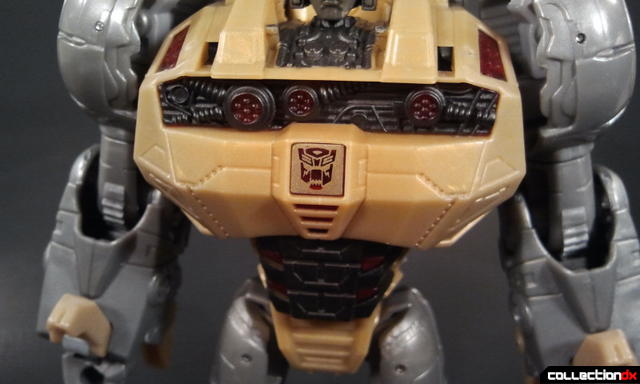 One obvious complaint about Grimlock that a lot of fans have had is that he is quite hollow. Being such a large toy, it's clear that a few cuts were needed in order to fit him into the budget, so his chest is indeed hollow. There's no denying that, but I don't think that it takes away from the overall heft and impressiveness of the toy. If it does bother you that much though, I find that it helps fill the void a bit more if you jam the T-Rex head into the cavity at the bottom more. 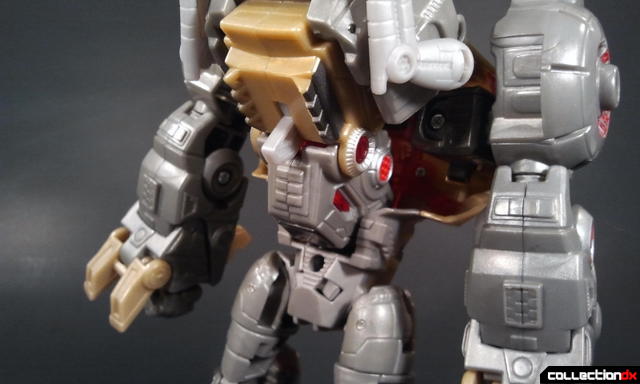 Grimlock's articulation is pretty good, if a little awkward at first. His shoulders are on an extension that allows his arms to swing outwards slightly, which is a little disorienting at first but actually helps him pose better. The arms can rotate freely and can also click upwards. A bicep swivel, clicky elbows, and a wrist joint finish off the arms and make them more than adequate for most poses. The legs are actually technically a v-crotch because of the angle at which they rotate. There is a thigh swivel, however, which makes this no problem at all. Although there is no foot articulation, his footprint is large enough to hold most poses quite stable. A ball jointed head tops off Grimlock's articulation and makes him quite the posable toy. 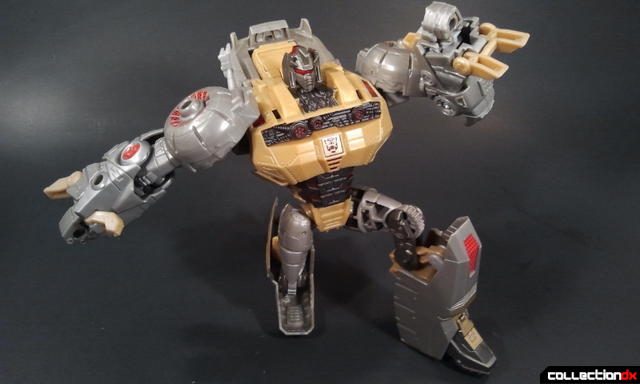 One thing I found particularly interesting is that, due to Grimlock's transformation, there's actually a bit of leeway between how forwards or backwards you want his legs positioned. What this means is that if you prefer your robots with a little bit more crotch thrust, Grimlock is more than able to do that. 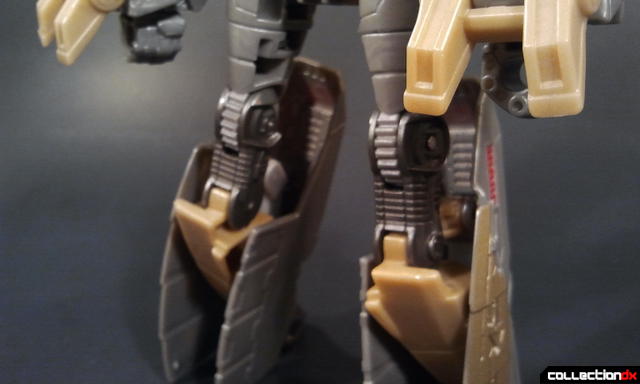 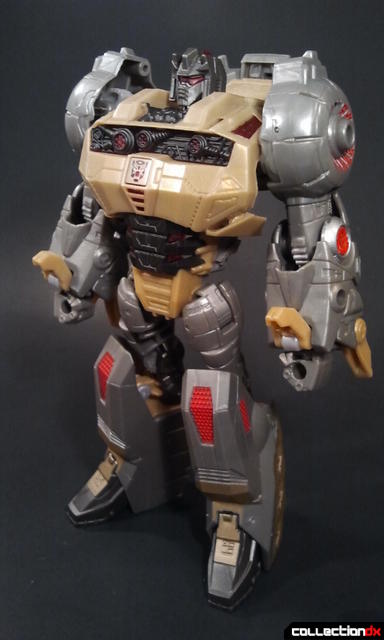 Grimlock comes with two accessories from the video game: his sword and shield. Both are cast in a vibrant clear orange plastic and have a nice matte black paint finish on them. There's lots of sculpted detail on these weapons and I love them. Although the sword is a little bit shorter than the in game version, that doesn't make Grimlock any less intimidating while holding them. 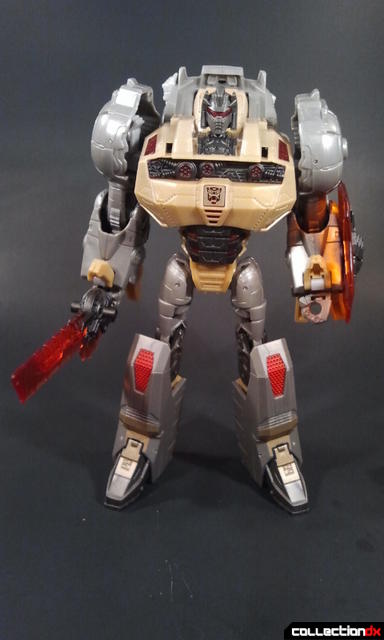 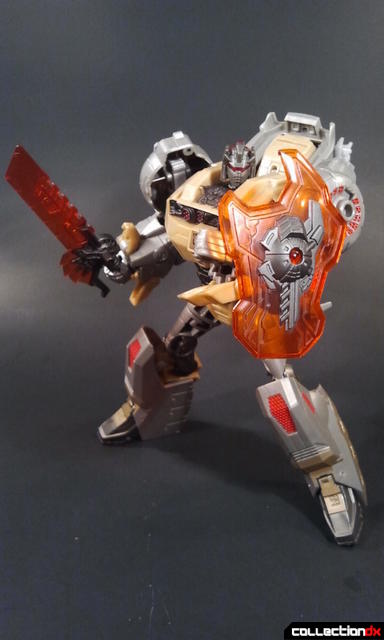 Thanks to how Grimlock transforms, you can actually have him tilt his hand downwards to help make him point his sword at people or drag it along the ground like a bad ass. 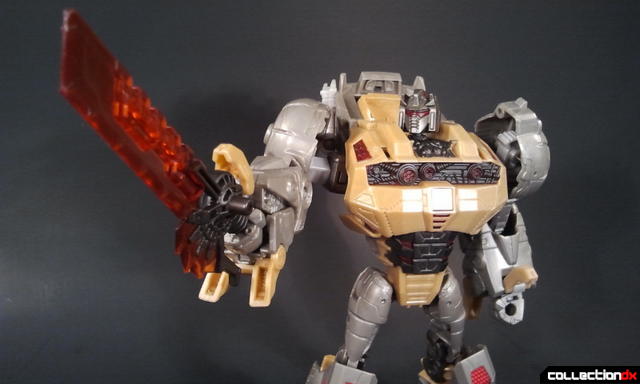 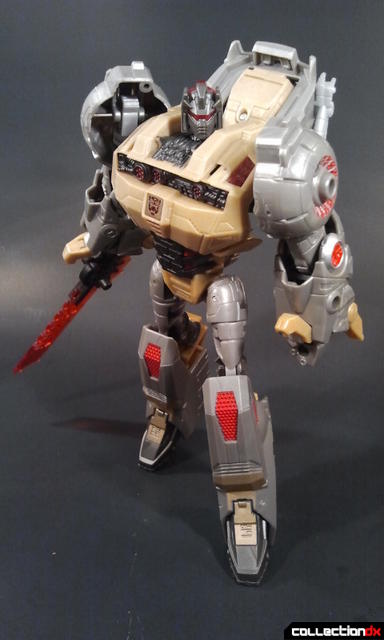 Grimlock's transformation is so simple that it can be done in mere seconds. It's just a matter of hiding the hands, pulling the head up, repositioning the legs, and folding the tail in. Grimlock is one of those characters whose transformation is never particularly messed or fiddled with because of its iconic simplicity and effectiveness, and that's not a bad thing in this case. It's quite refreshing to be able to transform such a large toy with ease. 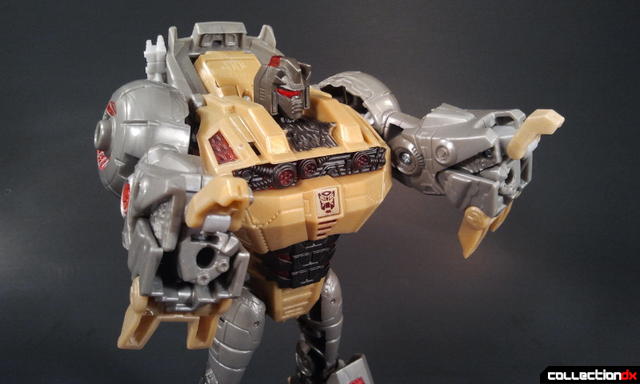 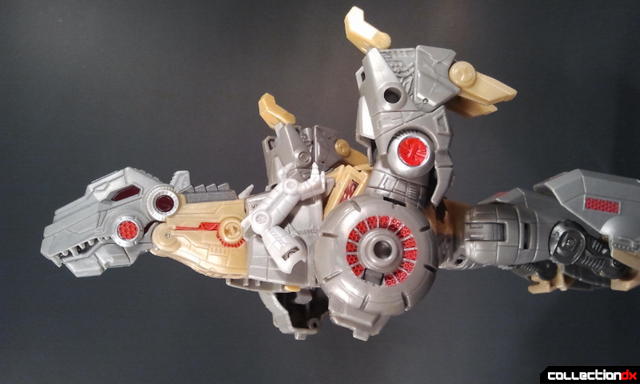 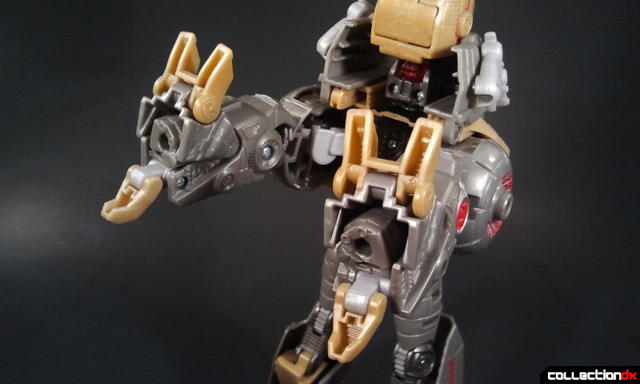 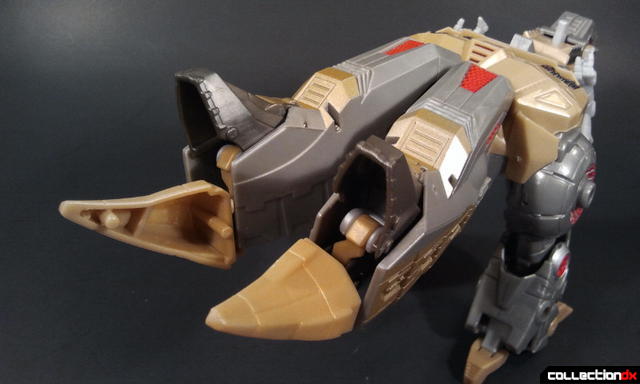 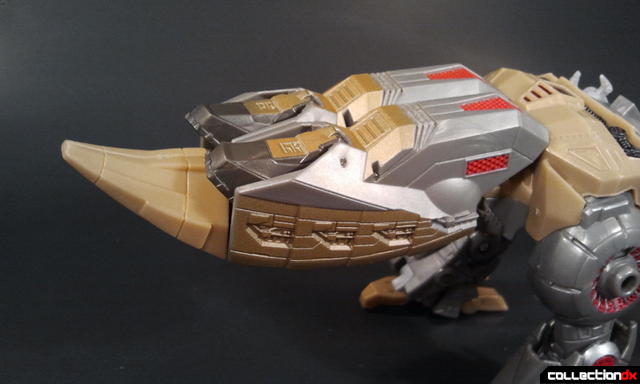 Grimlock's dinosaur mode is effective at accomplishing its job: being a robot dinosaur. The design is pretty accurate to the in game design, although it is not nearly as hulking compared to that version. Considering that mass-shifting is kind of hard to do, however, I think it's understandable. 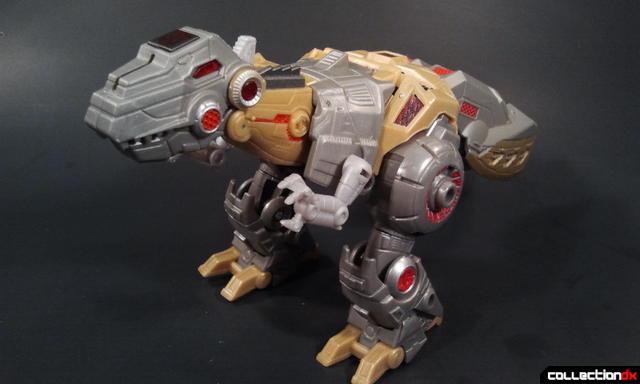 I know a lot of people have complained about how large and ugly the tail of the dinosaur mode appears to be, but I think that's mostly due to people taking pictures that do not compliment the tail. It's honestly not that bad. Is it a little big? Maybe, but it's not obtrusively so. 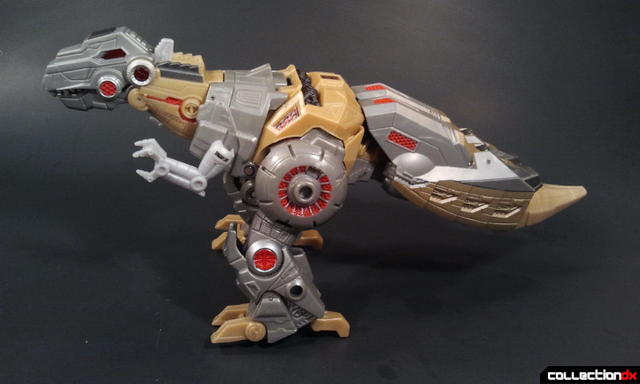 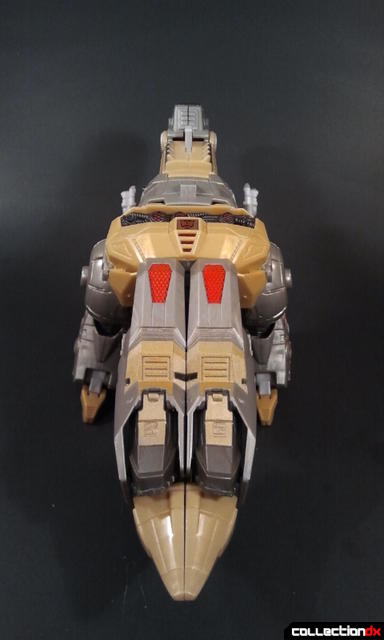 Due to the transformation, the dinosaur mode isn't particularly poseable, but it still does most of what it needs to. The arms are on free ball joints for subtle posing, and the elbows function as knees for the dino-mode that let you have your various T-Rex stances. 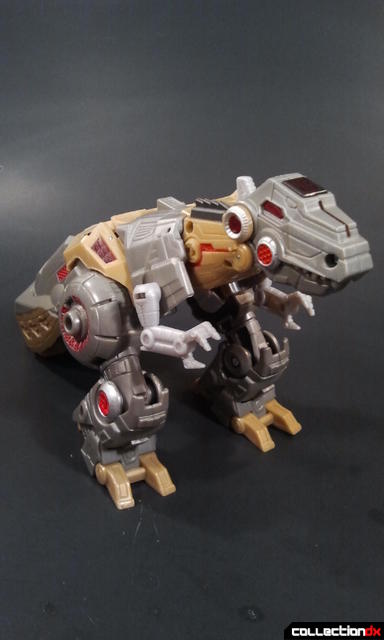 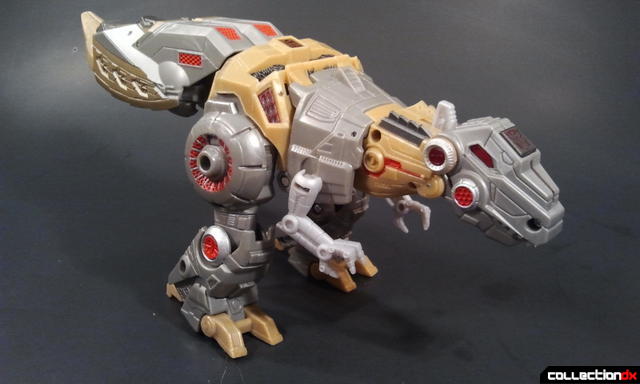 The dinosaur mode does have one major gimmick that is quite nice: a light up feature and a chomping jaw. It's rather unobtrusive and oodles of fun to make Grimlock bite down on imaginary Insecticons. 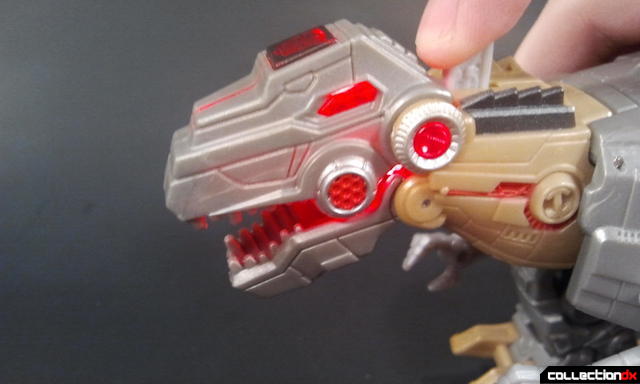 You can also store the weapons on either side of the legs as well in this mode. 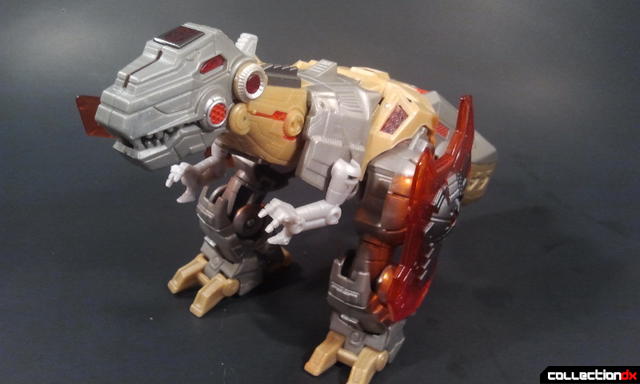 Grimlock is an overall very satisfying Transformer. He's larger, has a big sword, and turns into a freaking dinosaur. I know a lot of people may complain about how the toy is hollow or that the dinosaur mode is a bit lacking, but I think it's well done for what it is. Plus, how to kids tend to play with dinosaur toys? They hold them and stomp them around, and Grimlock is quite perfect for that. Is he a masterpiece of a toy? No, but for $20 I think he's more than alright. 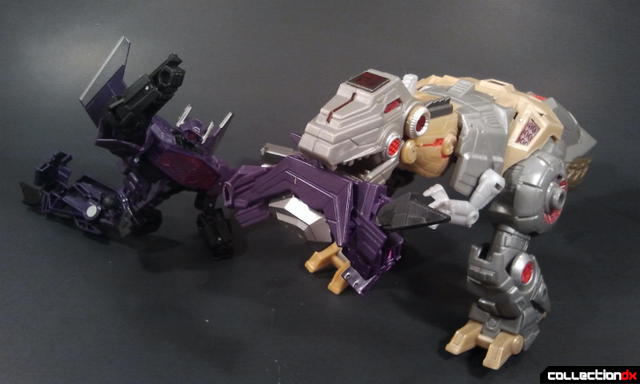 2 comments posted
Me Kurochan want one.

Great review,
I was on the fence at first, but after seeing a better 360 spin around the figure, I'm thinking about picking this one up. If I can't find one at a local store, I'll definitely have to go online for this one.