Hired by Redmond Mann to fight against his poopy brother Blutarch Mann, Dell Conagher—aka The Engineer—makes it a point to have his doodads do the work for him on the battlefront.
And that work is killin’.

With his trusty sentry gun, teleporter, and dispenser, The Engineer denies areas to the opposing Blu Team and gets his comrades to the front line faster. Some say. . . he is credit to team.

With this, NECA gives us The Engineer from Valve’s hit video game Team Fortress 2. As with their previous character incarnation of The Demoman, The Engineer is bad.

Not as bad, but pert near close.

The Toy
Before we get to all the badness, let’s start with the sparse good! 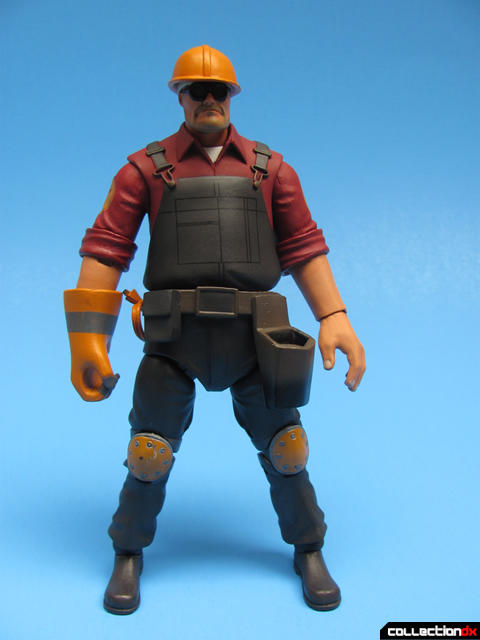 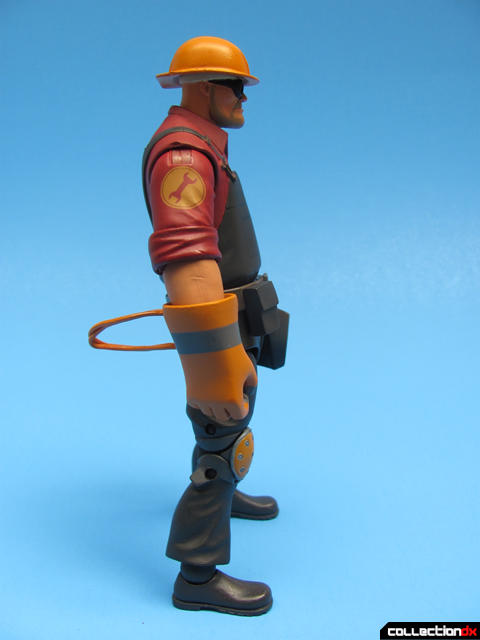 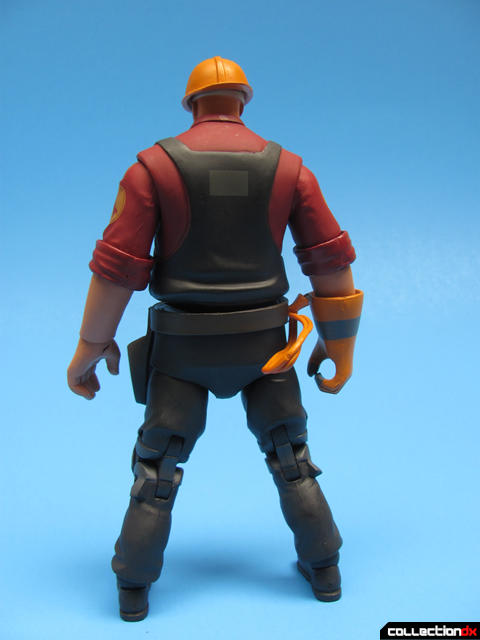 His sculpt is just about right on the money; Dell looks like he pretty much jumped out of the video game and landed on my backdrop. Everything to his kneepads, five o’clock shadow (although rather heavy), to the lines on his overalls are all present and look quite dandy: 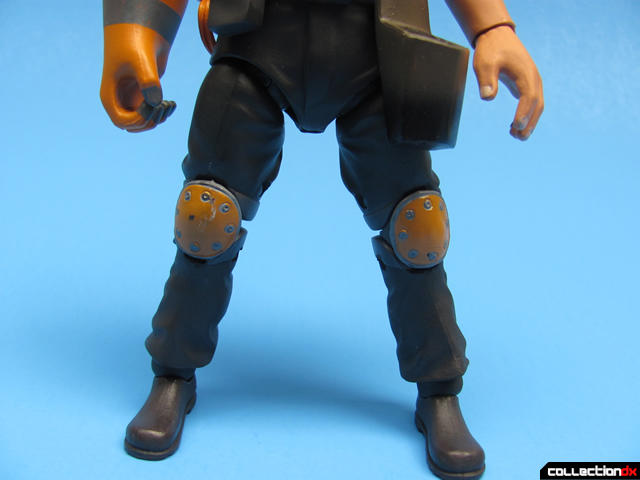 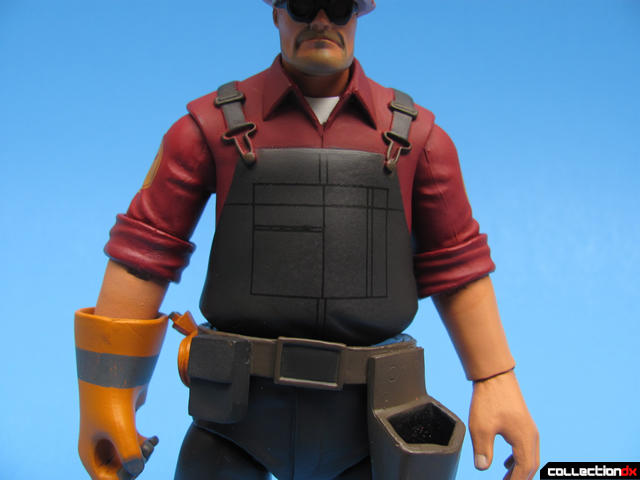 His clothes mold and fold around him and emulate both fabric and his in-game model; if these figures do anything right, it’s looking accurate (and, for the most part, nice).

His face seems to be molded after his beta face, rather his pre-production artwork; there’s something so subtlety off that makes him look just a tad strange. 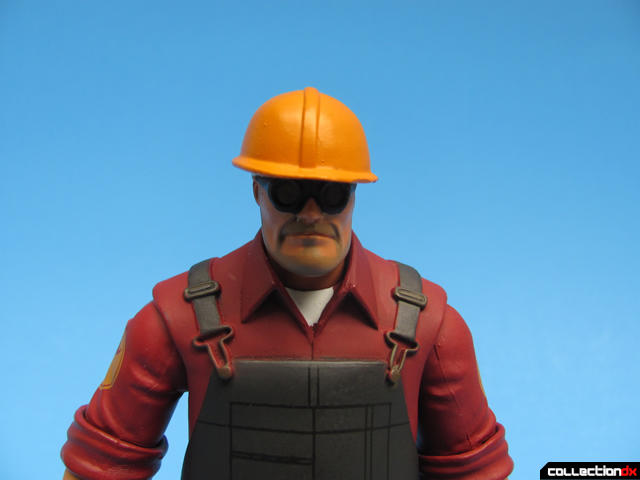 His colors are deep (a little too deep) and matte, a beautiful combination. There is plenty of overspray and some muddled details and pooling, however (such as his MOUNTAIN BEARD); mediocrity in the finest. From far away he looks fine, but when you get close, borders between red and brown are blurred and messy.

Unlike the previous waves of TF2 figures (such as The Demoman), there isn’t any color bleeding on this figure between moving parts; all this paint stays where it needs to stay. 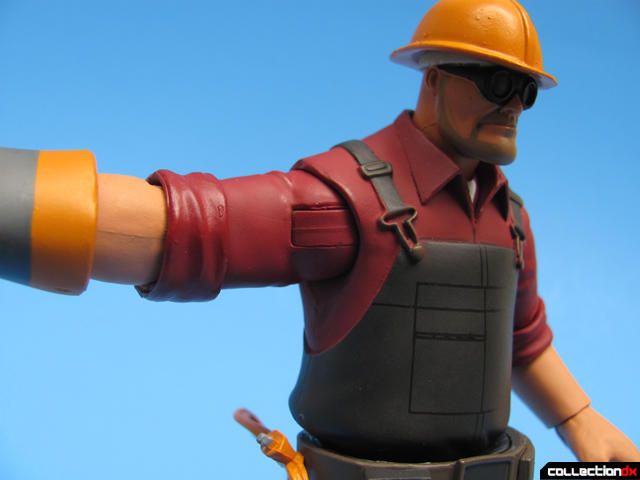 It helps that some of the joints aren’t painted; however, that doesn’t stop the fact that the ones that are still shed their paint. Just as with The Demoman, this is atrocious and unacceptable: 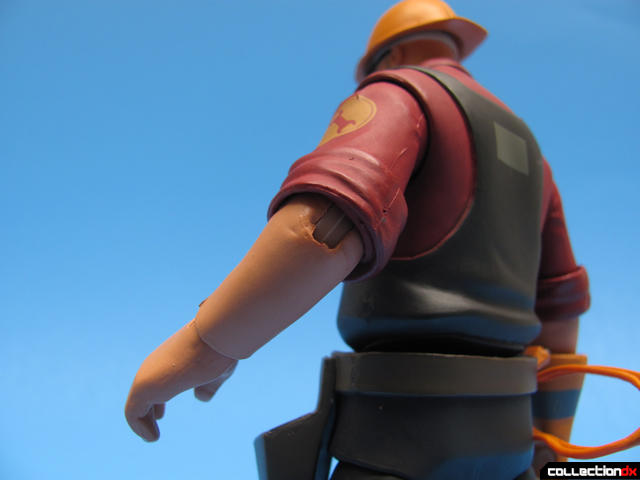 I was taking pictures of this figure and having to continuously blow away chips and fragments of paint lying on my backdrop.

Also like The Demoman, though, the tampos are great: 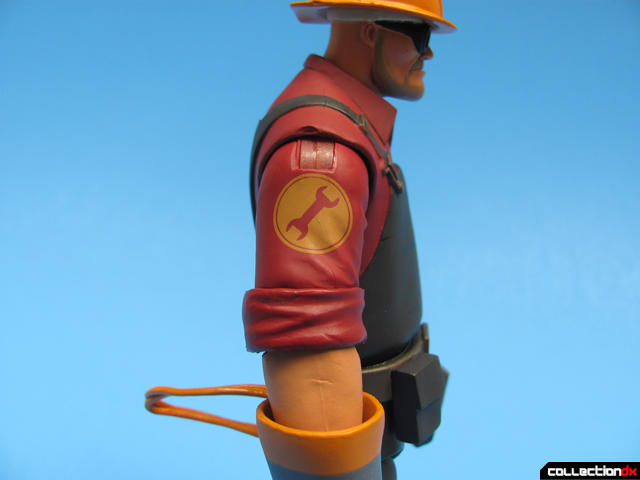 Articulation for The Engineer is improved as of previous waves, but still suffers from some of the same problems. Engie’s sculpt—while nice—severely hampers his elbow articulation; you can get about 30° out of them, and really only of the right arm. 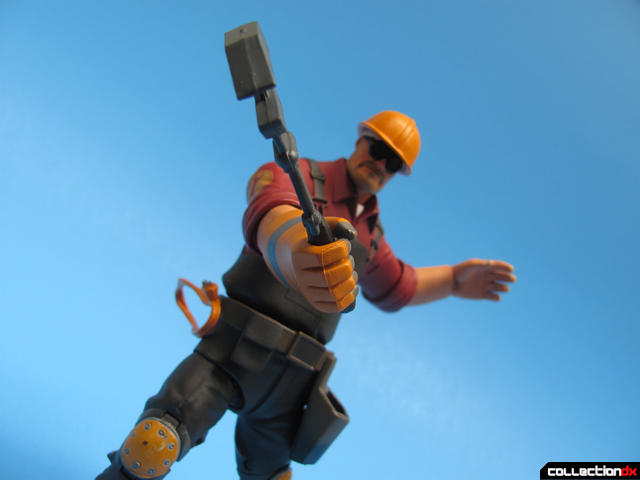 You see, Dell’s right hand is a glove and has a double jointed wrist that’s high up on his forearm. This does not allow the proper grip to move the elbow as one would surely sheer the joint clear off applying any amount of pressure to overcome the terse elbow joint; this renders it rather useless. And man-handling it will just ensure that you break the brittle joints. 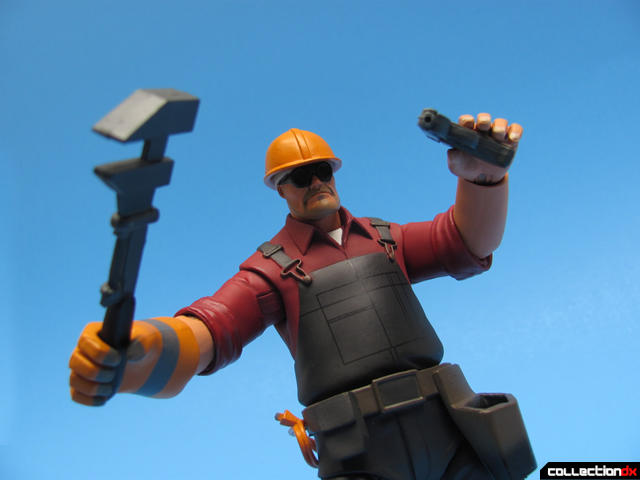 Universal joints in the shoulders are nice, though, on the contrary.

Even more so on the contrary, all of The Engineer’s other joints are actually pretty nice! 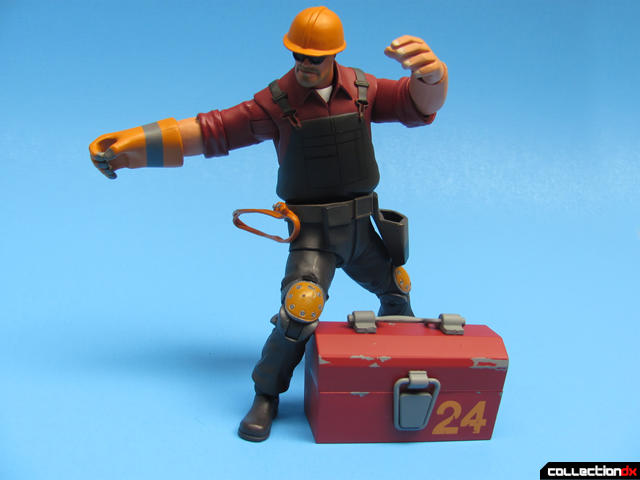 But here’s where things get disgusting, though (and I will say that this MIGHT only be mine). Engie’s hips are different from each other, and one is fused solid this limiting me to this: 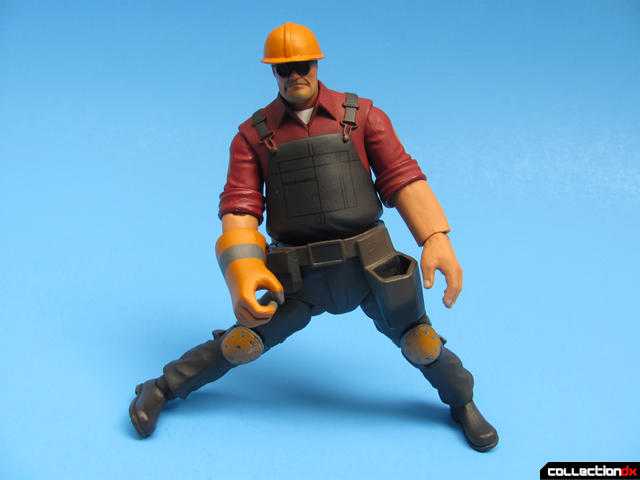 His left hip joint is immobile; besides it moving in a 360, there is no other movement.
Nothing.

Now, if this was an assembly error, I call it trashy QC.

But if for some reason this is on purpose?

I call it trash, plain and simple.

I now have a toy with what feels effectly like a T-crotch on one side. 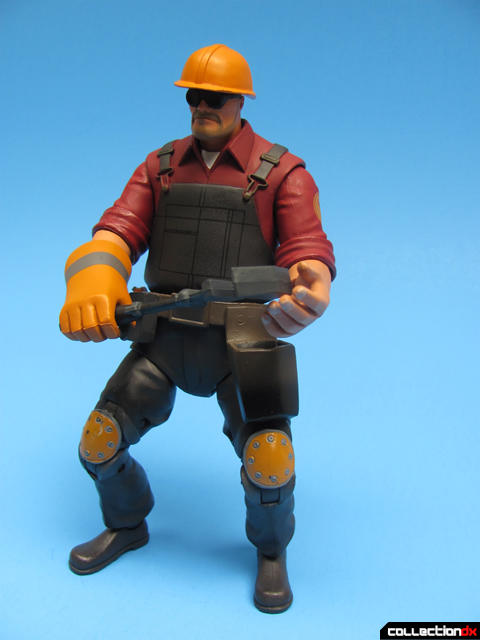 But even then, ever so slightly.

As far as accessories go, Dell comes with the following: 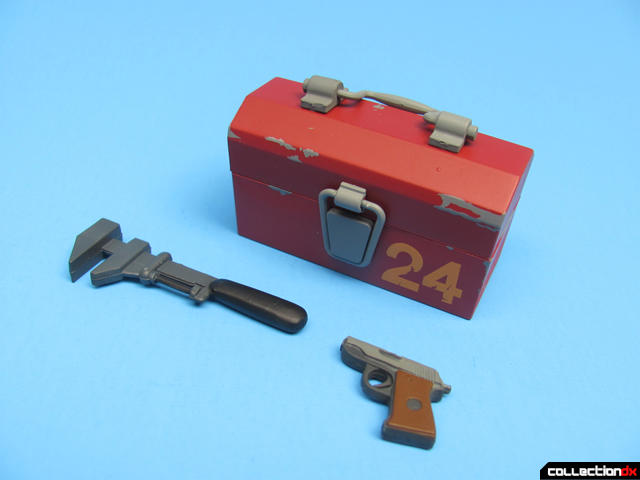 These all look quite nice and feel good; they—as with The Engineer—look like they fell right out of the video game. The toolbox even opens up so it can hold some stuff. 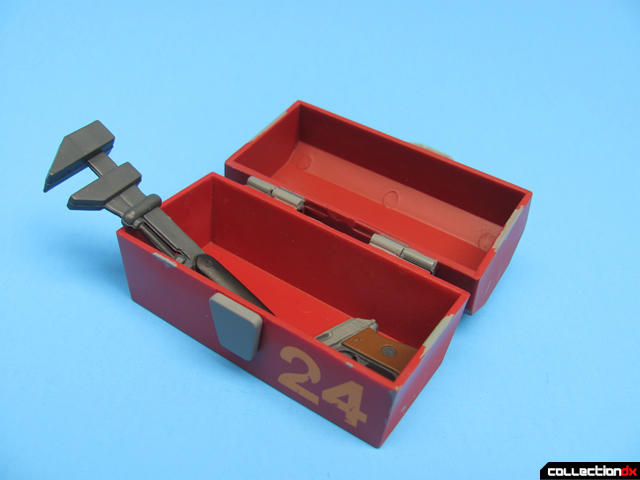 The wrench fits snugly into Engie’s gloved hand and palms nicely into his other; however, his gloved hand is made to only fit the wrench. He can’t even begin to hold his pistol. 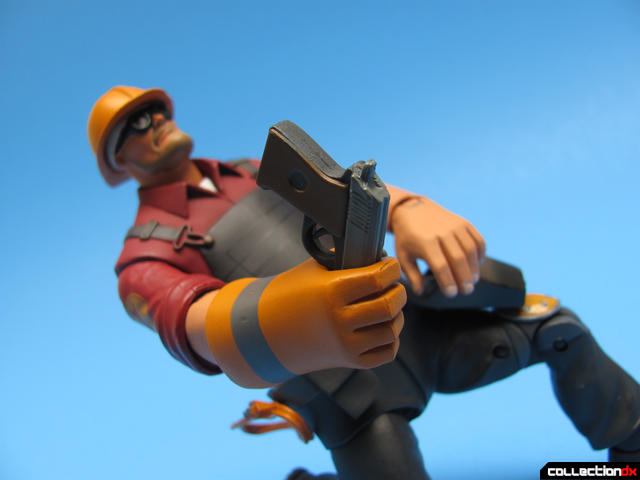 This is truly embarrassing to see.

You make an accessory for a figure that it can’t even use. And I’m afraid to try and make him hold it for the fear that his hand will bust! At least the toolbox on Engie’s shoulder makes for a stunning shot: 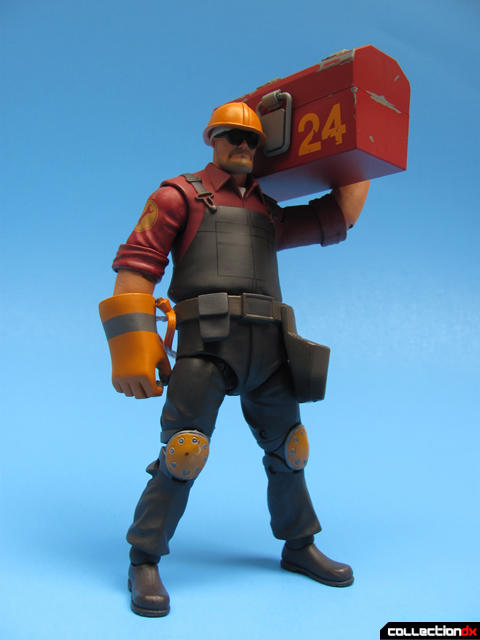 I would have really liked a shotgun and a level 1 sentry, but oh well (not like he could hold the shotgun anyway).

Aside from physical accessories, The Engineer comes with a trading card that unlocks a special in-game item aka A HAT. Just punch in the code and you’ll receive a Genuine Texas Ten Gallon, an $8 dollar value, free! 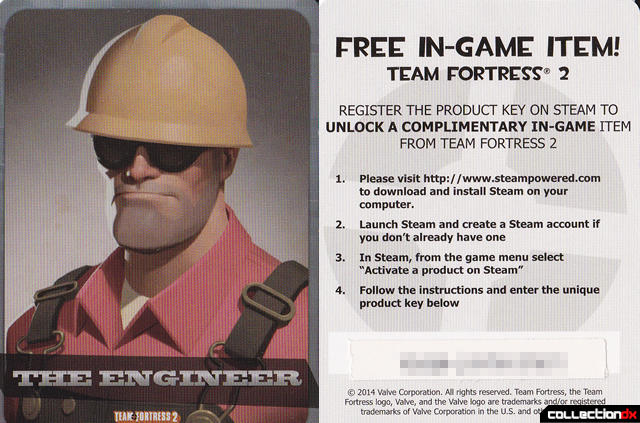 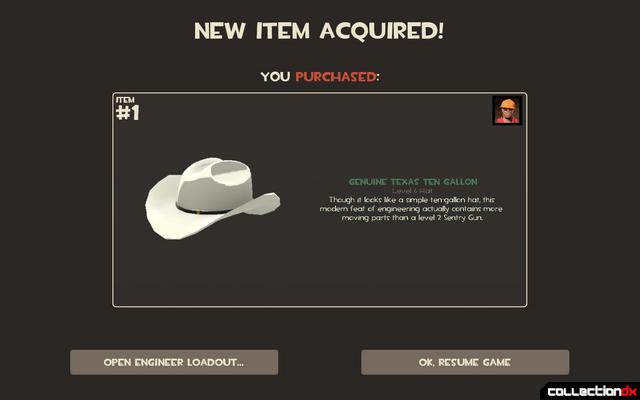 And before I forget, Dell stands at 6 inches tall 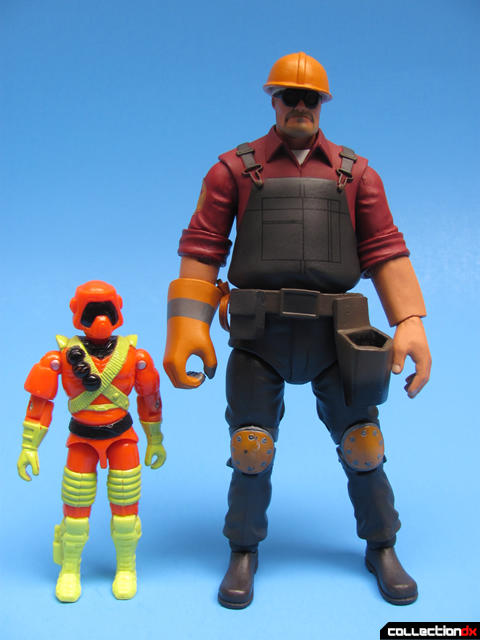 As previously with The Demoman, don’t buy this toy.

Unless The Engineer is you husbando or you’re just wild about hats, then this will only lead to heartbreak. While the sculpt is great and the figure looks good on a shelf, everything else is bad. The paint is sloppy; the articulation is bum; and it sheds and has abominable QC issues. Although it is a marked improvement in some aspects to previous waves, it still sucks. Don’t be like me; save your money. 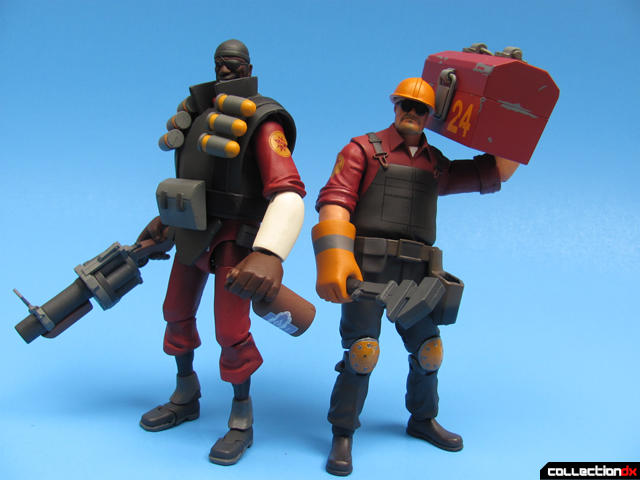