From the reboot of Robocop comes EM-208. This drone is what Omnicorp wants to fill the streets with until they realize they lack human reasoning. When Detroit police officer Aleks Murphy is mortally wounded in an accident, he becomes the first upgrade of the EM-208 platform, merging man and machine to become Robocop!

This is a pre-production sample courtesy of Threezero. The toy depicted here may undergo further changes and refinement by the time it hits retail.

I initially questioned why we needed a Robocop reboot, but when I watched the movie it was actually pretty good. It stayed reasonably close to the source material and had a few cool nods to the 1987 film.

There is no counterpart to EM-208 in the original movie. The two legged ED-209 gets an appearance in both films, but this guy is new for this reboot. 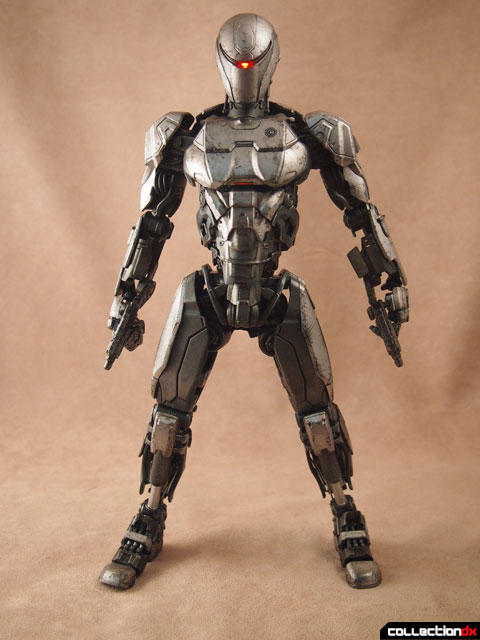 Since this is a pre-production sample, there is no packaging. Instructions are limited to a crudely photocopied sheet. Three watch batteries are included and pre-installed.

EM-208 is 1/6 scale so he stands about 12" tall. He's a menacing looking robot that has hints of both the Terminator and the Cylons. How Omnicorp thought this would be a fitting design for patrolling the streets is beyond me.

The finish is your typical Threezero finish with weathering all over. This is a well-worn EM-208 with scuffs and scrapes to show his time in the streets. I can tell you this is not one of the ones that fights Robocop because, well, he is in one piece. 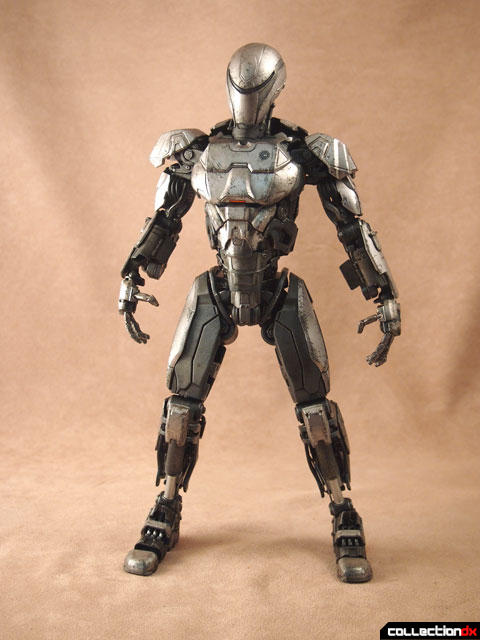 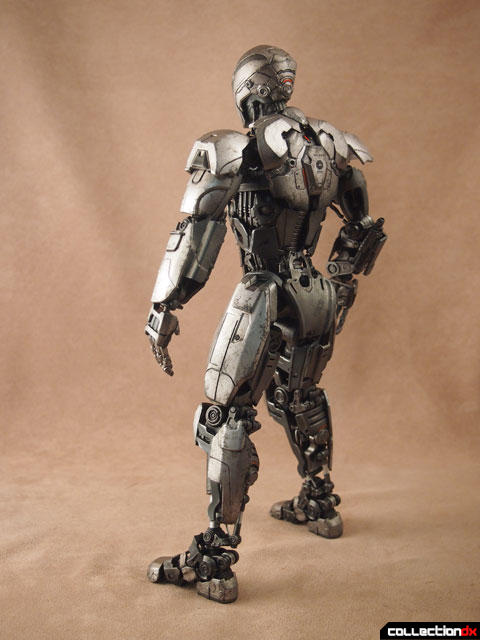 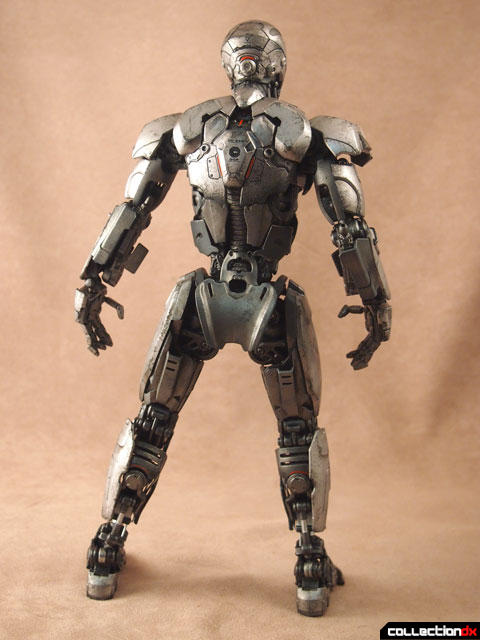 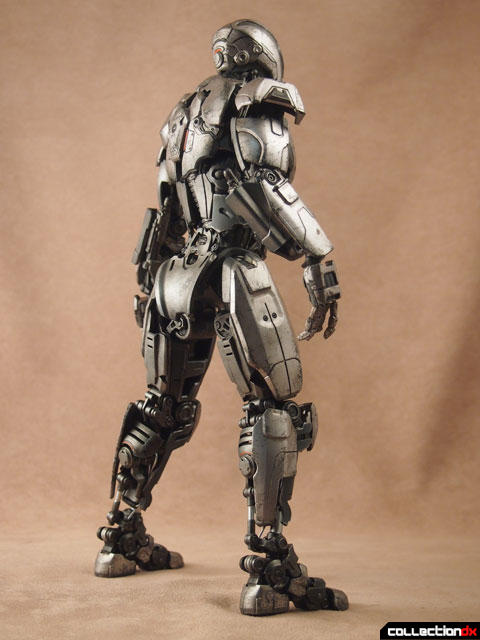 The toy uses a combination of ABS and PVC plastic to give different textures around the figure. Flexible parts like the spine and neck use the softer PVC while the armor plating is harder ABS plastic. The overall quality is great. While not toy-like in design, it can handle repeated posing without issue. 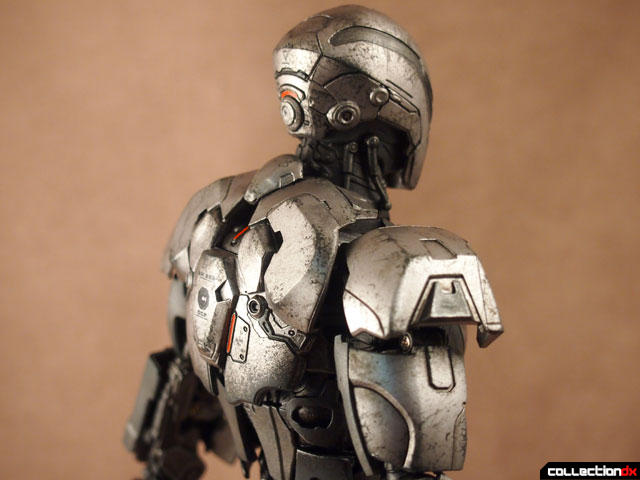 The back plate is held on with magnets. Beneath is a small switch to activate the light up eye. I like the inclusion of the fitted peg to help align the panel. 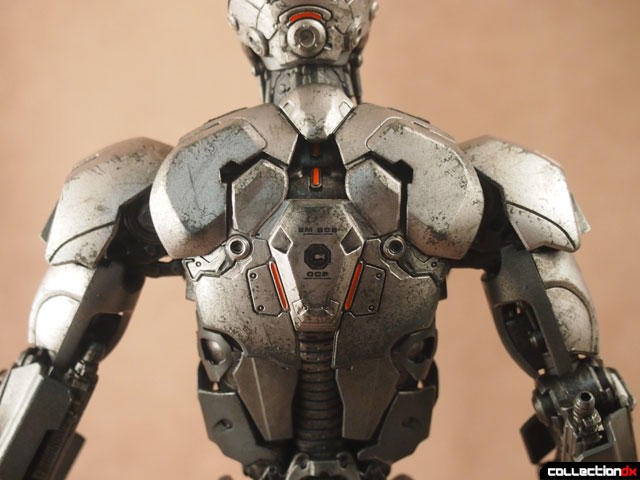 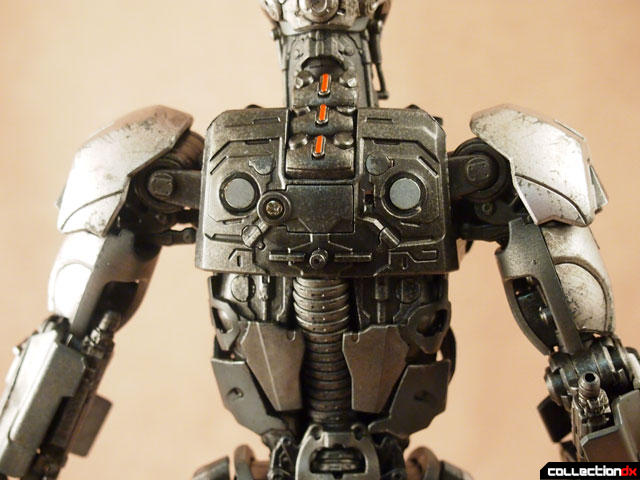 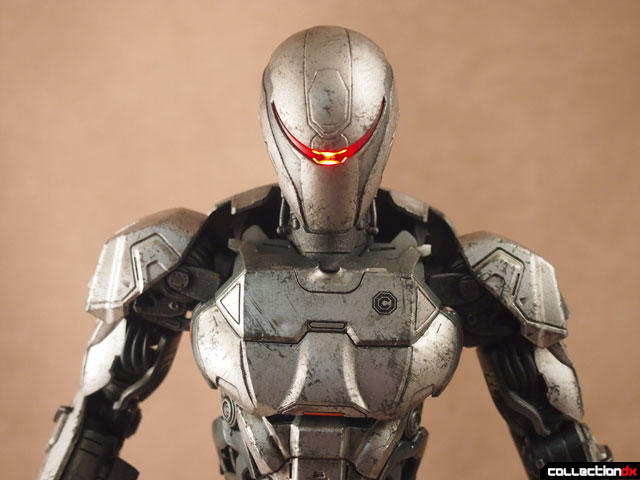 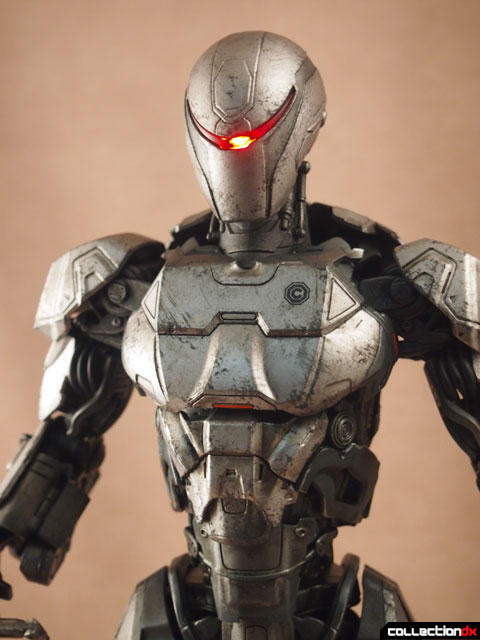 The head has a ball joint at the base of the skull and again at the neck, but the rubber covering and internal electronics make posing options limited. 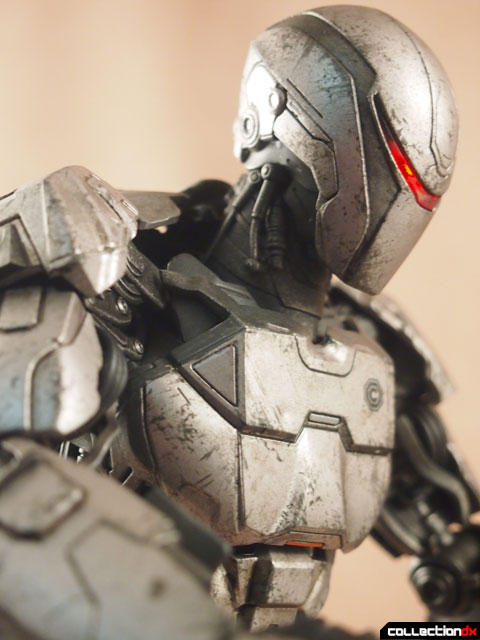 The toy features some spectacular hand articulation with some of the tiniest poseable fingers I've seen. 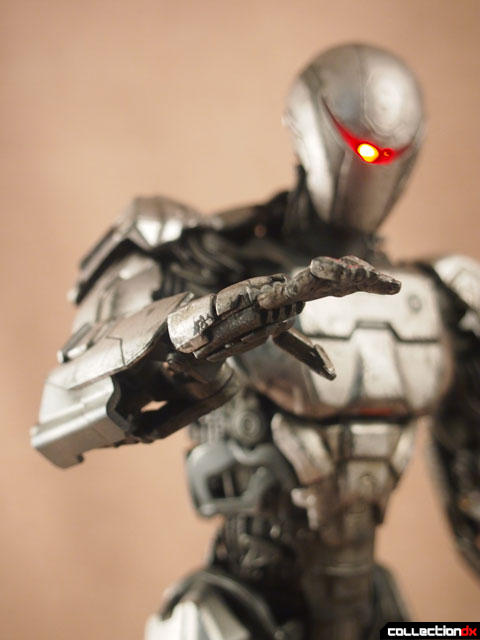 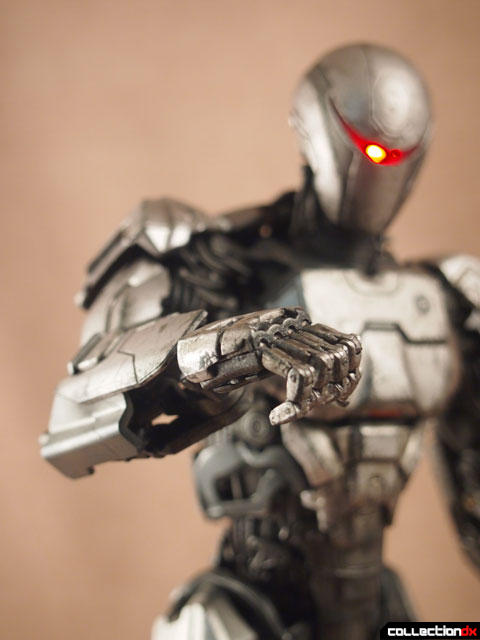 Arm articulation is good, but that's as high as the arm goes due to the shoulder armor. There's a bicep swivel and elbow hinge. 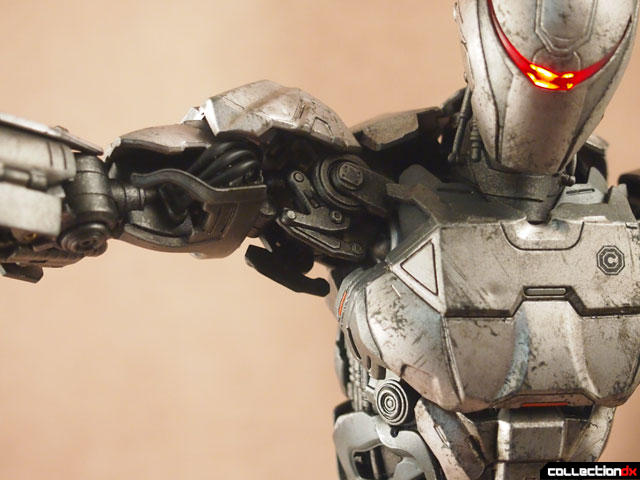 The forearms house hidden spring loaded blasters. On my sample, this action feature was not quite refined I think. The guns had a hair-trigger activation, and when housed in the arms they did not like to push in all the way. I expect this to be fixed for the final version. 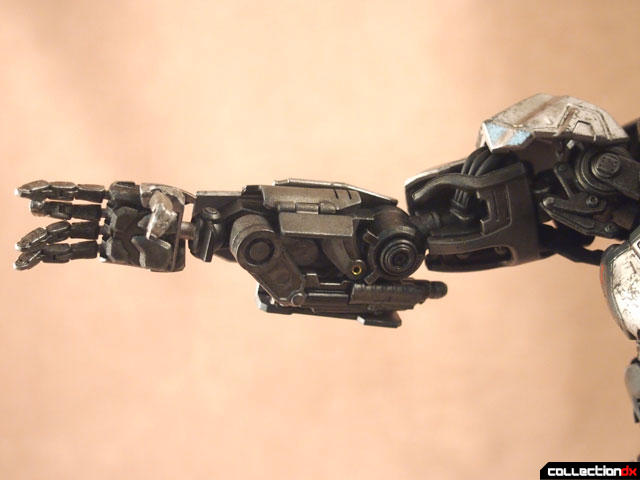 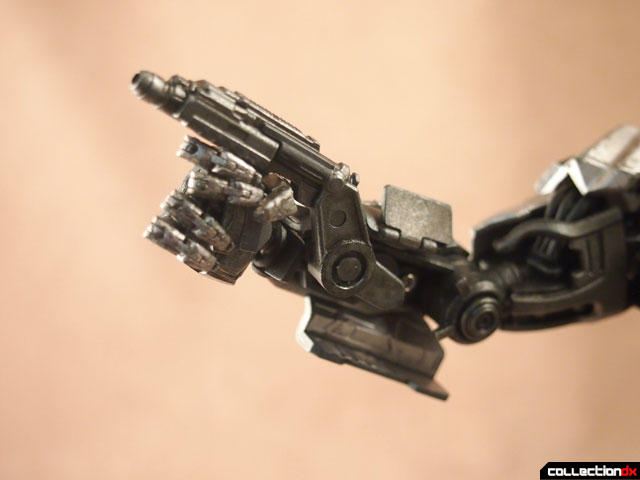 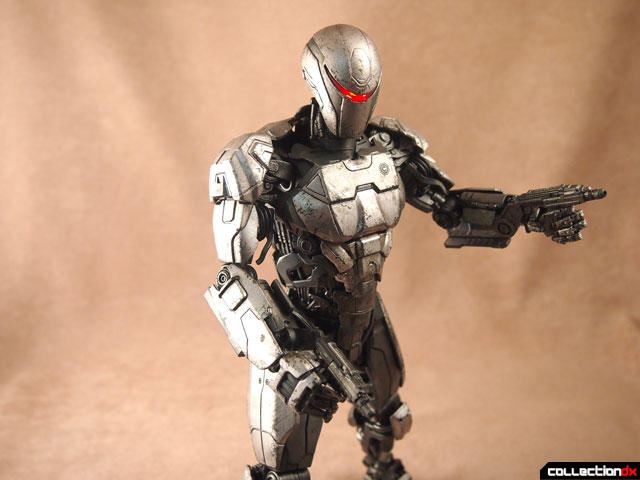 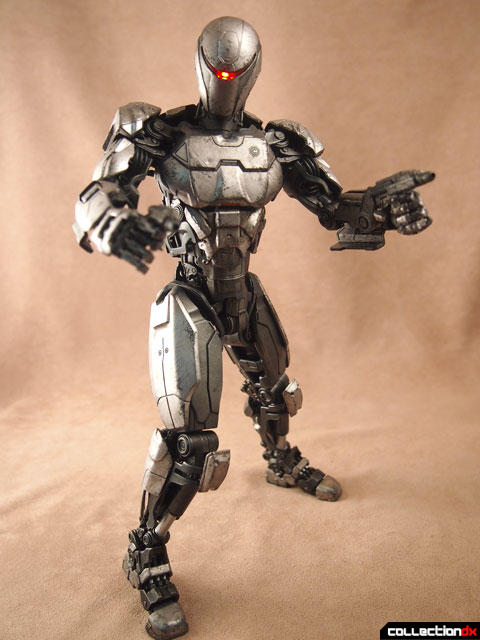 The torso is a series of plates that cover a layered vinyl internal sheath. 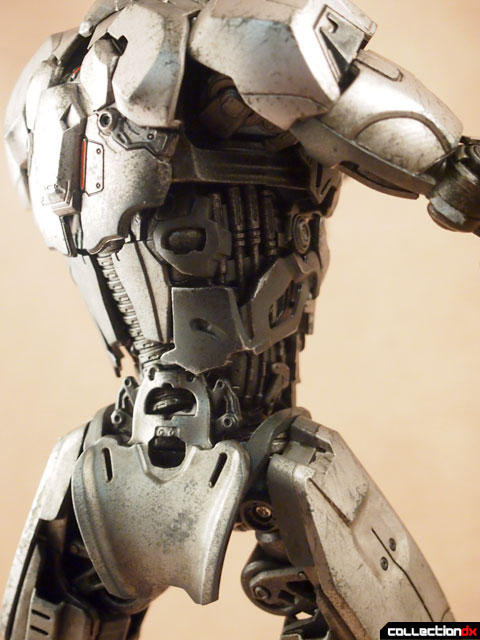 The legs are visually interesting with multiple layers of separate components. I'm a little disappointed at the range of motion in the legs. This is about what you get. 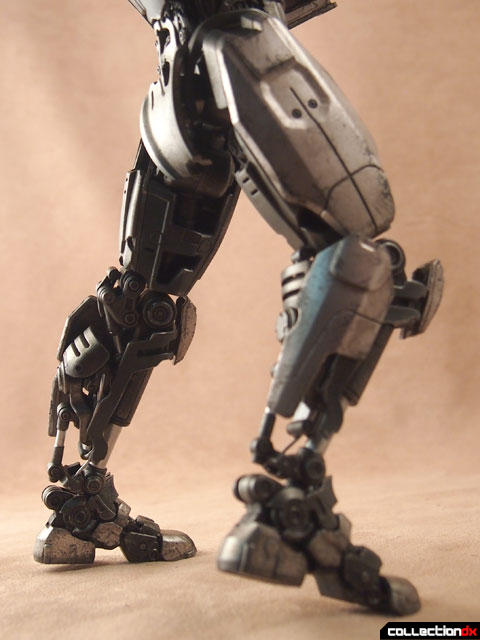 Most of the pistons on the legs are just for show, however there is one working set. The back of the knees features a complicated piston and hinge mechanism that probably is not doing the articulation any favors. When you fully extend the leg, the pistons come out and are a pain to get back in. When bending the knee, it's these pistons plus a spring loaded leg panel that keep the joint from having a decent angle. 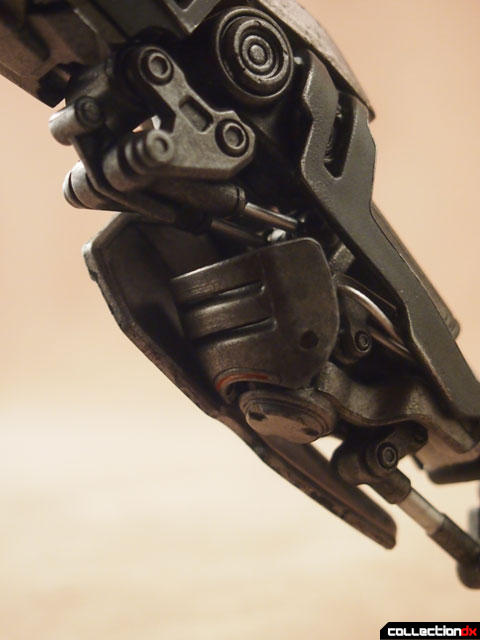 The calfs each feature a jointed panel on the outside which is kept in place by spring tension. I'm not sure if they are supposed to do anything or not. The ankles are simple ball joints that are hidden by faux pistons. The toes bend, and there are movable armor panels on the top of the foot. 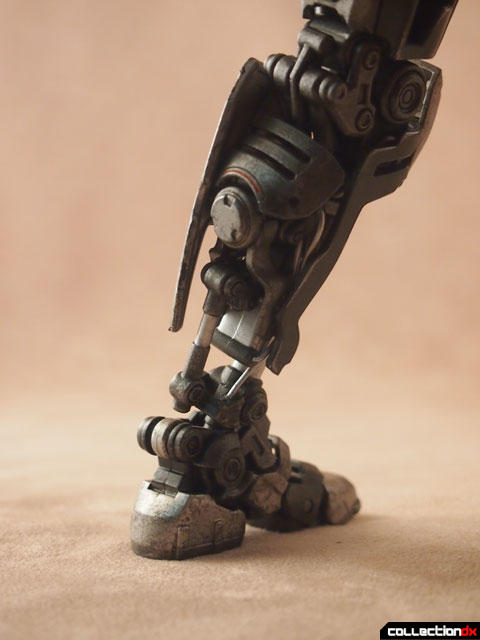 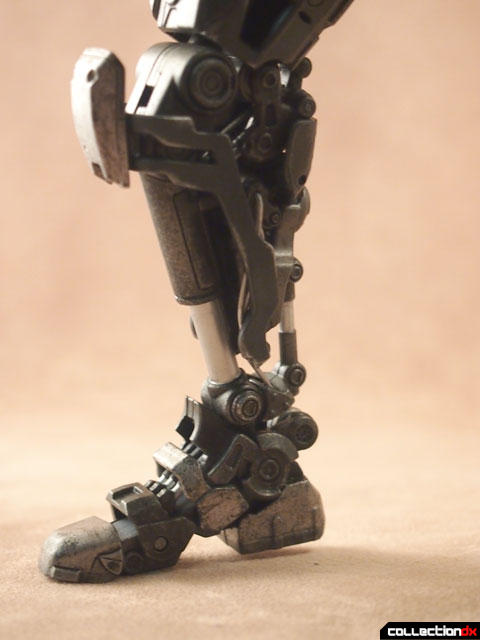 EM-208 looks great, and is on par for quality with other Threezero releases. I'm not sure the demand is out there for this character from the movie, but as a stand alone robot design he's very cool. 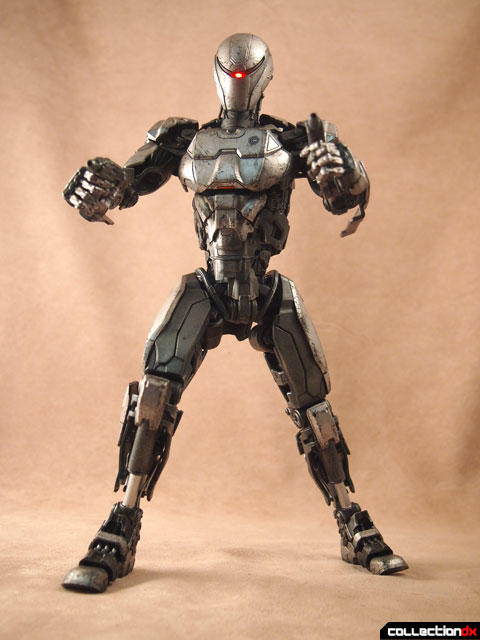 Thanks again to Threezero for the early look. RoboCop 1.0 is available now at http://www.threezerostore.com and they are also working on Robocop 3.0 and ED-209. If you are a fan of Robocop, you won't want to miss these.

I haven't seen the reboot, so maybe this is accurate to the source material, but his legs look awfully short to me. It might in part be an optical illusion created by his long and narrow abdomen, but in some shots I would swear his legs are barely longer than his arms.

I don't mean to knock the figure - the design is gorgeous, the mechanical detail looks amazing, and the weathering appears top notch. It just looks more like Gimli's proportions than Robocop's.

If I wasn't certain that there'll be a Hot Toys Ultron figure (or several) for Avengers 2, this would make a great stand-in. As it is it looks like it still could be one of Ultron's minions.