Dr. Crank has to be one of my favorite Hercules releases so far. I don't know what it is, but I seem to like it more than the others. The others are really good, but something about this design tickles my brain. This is one of six releases that TFC Toys is releasing to form the gigantic non-Devastator robot called Hercules, one of the biggest Third Party releases to date. Six figures with three modes each that combine into a gigantic green and purple robot? Yes please. I don't think I need to mention that collecting all six will be an expensive proposition, as they are $100 each.

Dr. Crank comes in the usual Hercules type window box that actually sports some cool artwork. Unfortunately, I don't have it at the moment. It is the same, however, as all the other releases, which you can check out here on CDX.

The figure follows the same kind of CAD designed blocky look of the others in the line. He is molded in durable bright green and purple plastics. He is shown here outfitted with his weapons and crane backpack. 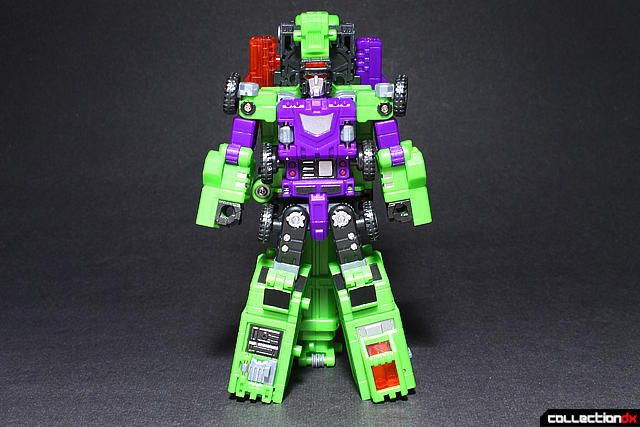 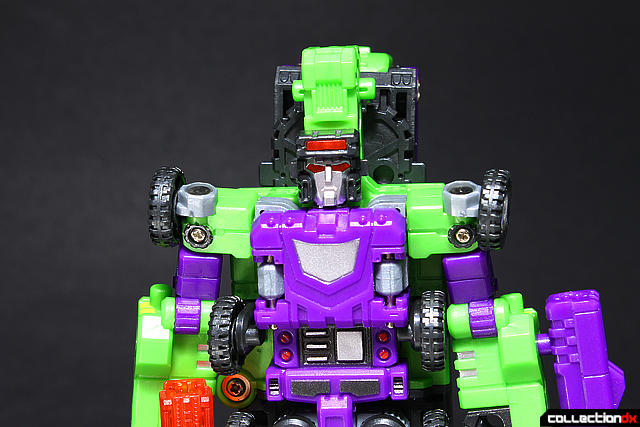 The crane can be shoulder mounted should he need to use it as a weapon. 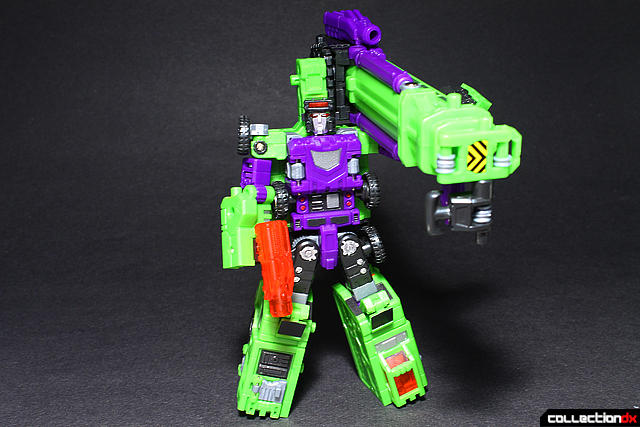 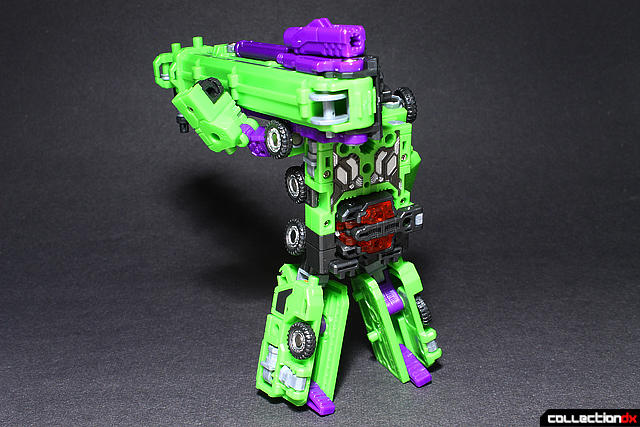 The crane can also be removed if you don't like the backpack look. I think the only nitpick I have with this one is the lack of feet. 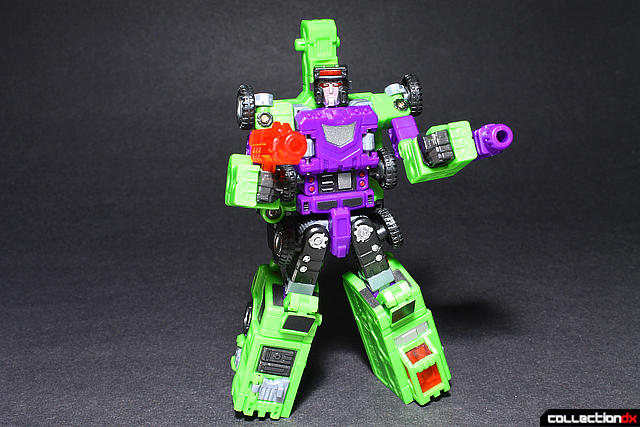 This figure makes good use of its generous light-piping feature. 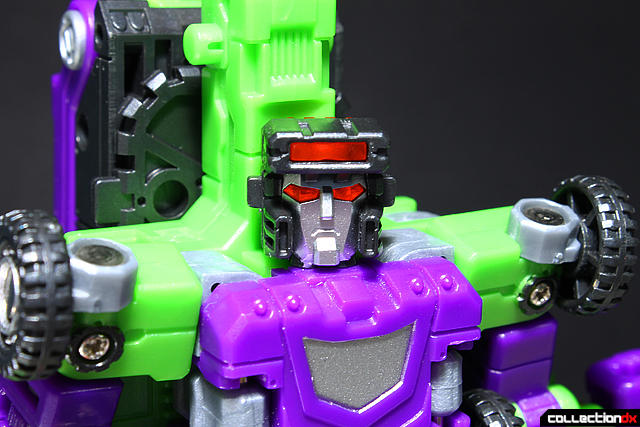 I'm really impressed with alt-mode. While it's a simple design, it just looks darn good. 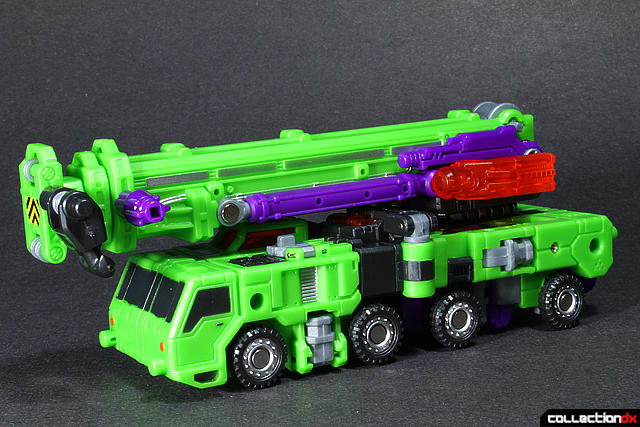 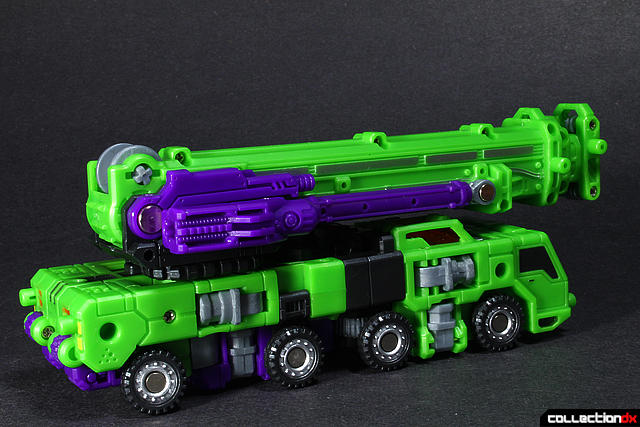 This figure really, and I mean really, puts the the crane feature to good use! It is HUGE! I almost could not take a picture of this. Check out the working pistons. 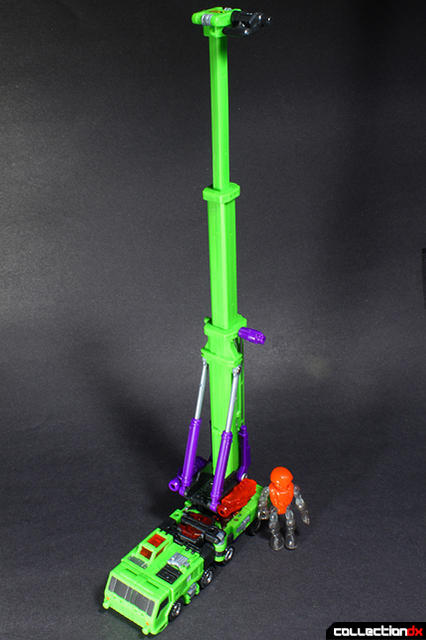 His third mode forms the chest and head of Hercules. This mode really gets me itching to see the final result of all these figures coming together. 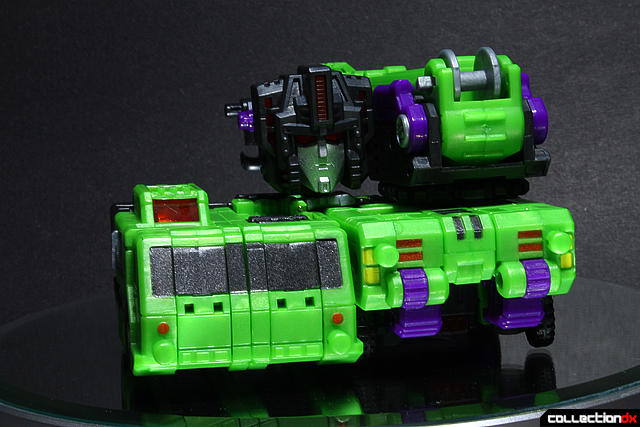 The bad news is that the hook feature doesn't work. The good news is that the cranking feature is built-in. If you visit TFC-Toys' Facebook, they show you how to get your Dr. Crank to deserve his name. Get that string ready!

These third party combiners keep looking better and better but ouch, is that $100 for a six inch figure? I wonder if the fan response to these influenced Hasbro's decision to release Fall of Cybertron Bruticus at all.

I think Bruticus had more to do with Fall of Cybertron and him being central to the trailer.

I'm not I'm feeling Herr Crank. He's not as handsome as my Hook <3

Although I am notoriously critical of Devastators.

also $100 and no string? We need to demand the 1 cent string be installed out of package.

I'm guessing they picked Bruticus because it's more prominent in the story or because of the reception of the trailer but I was talking more about Hasbro actually choosing to produce a combiner in the deluxe scale. People have been asking for years but the response was always that it wasn't viewed as viable at that time. Now that third party companies are selling combiners in the six inch scale for hundreds of dollars Hasbro probably decided it wants to get its piece of the pie.

A piece of the pie?

They eat an entire bakery every day.

Why should they care about what some guys making a few thousand figures (probably with small profit margins) are raking in when they make close to a million of each toy just for the American market? Those knockoff combiners aren't popular with the kids market at those prices. They are not in any competition.

There's been plenty of larger sized combiners. Maybe not ones THE FANS want, but it has happened. Even if the Energon stuff is older, they kept recoloring them for new lines as filler. They even made box sets of them.

So now they have a new game coming out that unlike the first, has an install base since it's the sequel. They've got you by the lugnuts so now it's time to squeeze the monkey wrench.

"I was talking more about Hasbro actually choosing to produce a combiner in the deluxe scale. People have been asking for years but the response was always that it wasn't viewed as viable at that time."

what about Build King