Genndy Tartakovsky's Dexter's Laboratory, like his Powerpuff Girls, Clone Wars, and Samurai Jack, is a manic tribute to the popular cultures of America and Japan. Dexter's Laboratory's 78 episodes aired between 1996-2005, providing a welcome respite from the network's uneven lineup. I've only seen a few episodes myself, but found them engagingly fun, and filled with a fan-boy sensibility. This toy is no different. The Walking Robot (hereafter DWR) is packaged in a vibrantly colored window box. 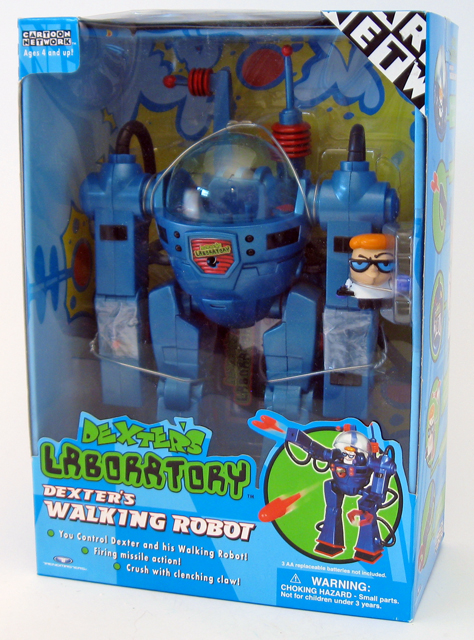 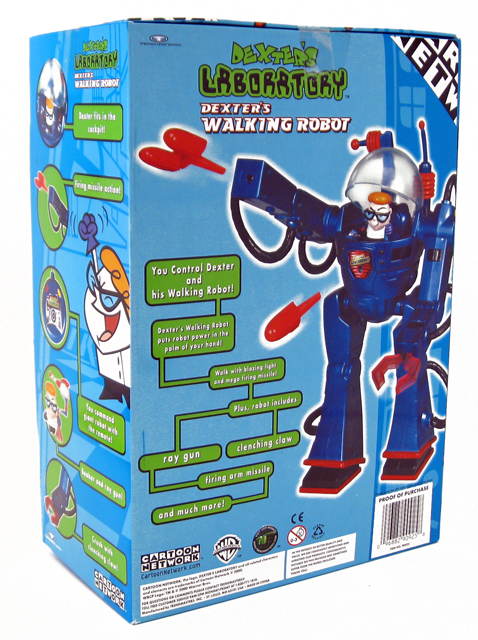 Inside, DWR is held in with those awful wire ties, but they are easily dispatched with a sprue cutter. 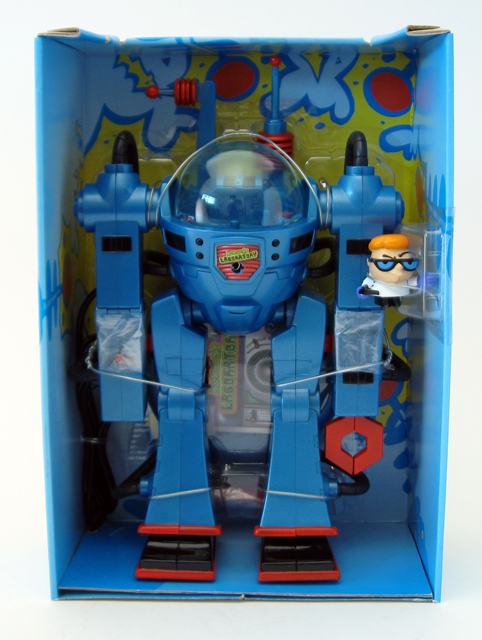 In addition to the mech, DWR comes with a small, static Dexter figure, two missiles (one for the bot's right arm, one for its chest), and a ray gun and beaker for Dexter. 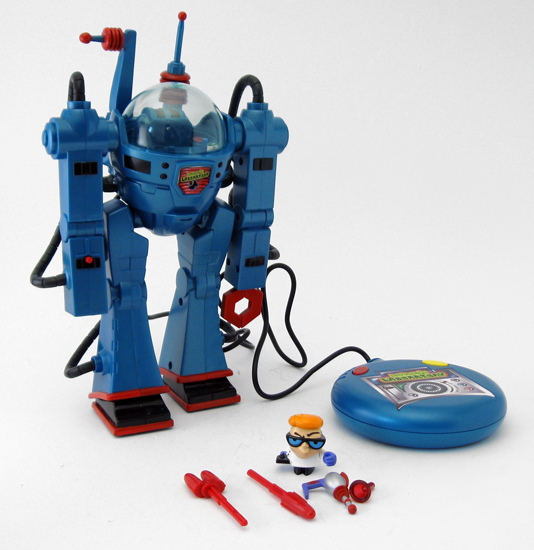 Whether or not it's what Tartakovsky or the toy's designers had in mind, I can't help but think of DWR as a combination of classic tin walkers and Tetsujin T-28. Like the T-28, the bot is a roundish blue behemoth controlled by a precocious child. In this case, the toy is piloted by Dexter (more of a 70's thing) but controlled by the toy's owner via remote. Given the roots of the figure, it nonetheless retains a contemporary feel. 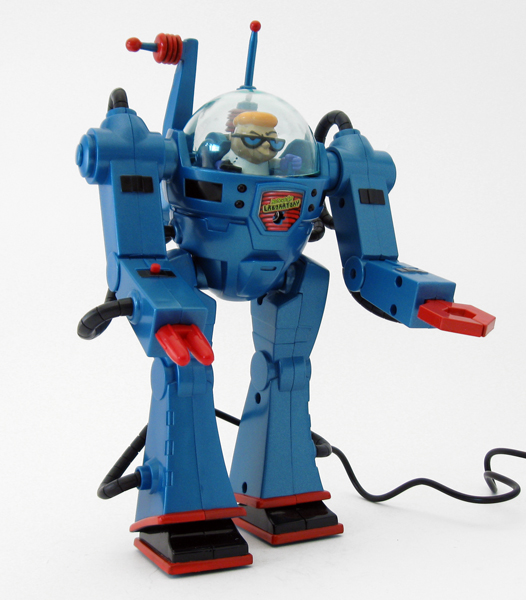 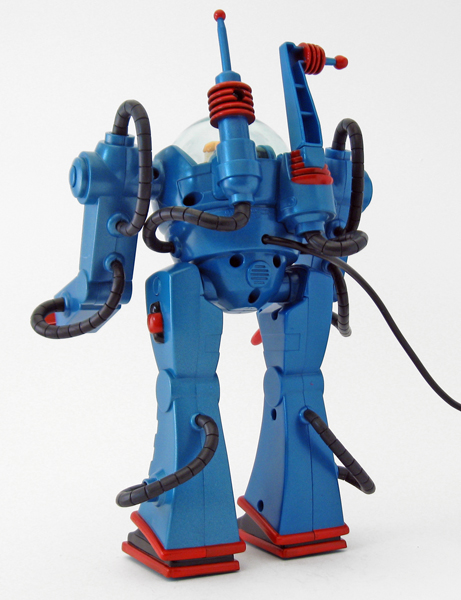 The left hand claw is spring loaded but not actuated by anything. 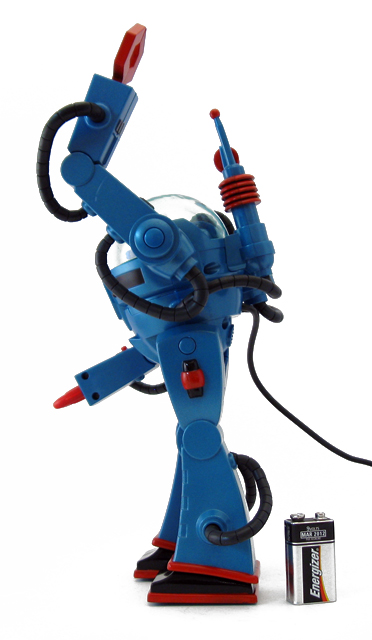 The cockpit is more detailed than you'd think. 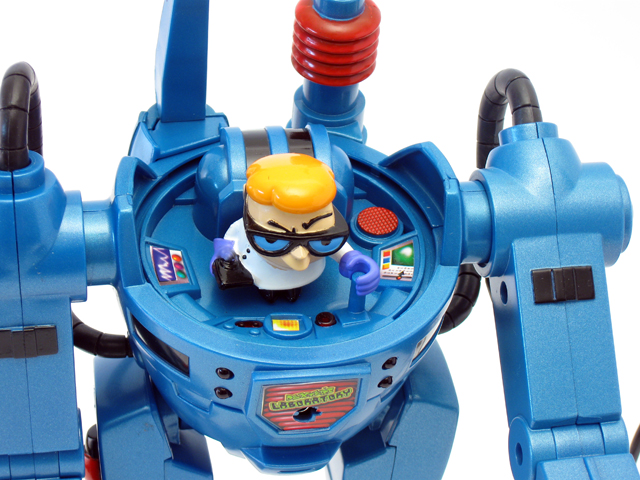 The remote control itself is a shameful piece of design. The less said about it the better. 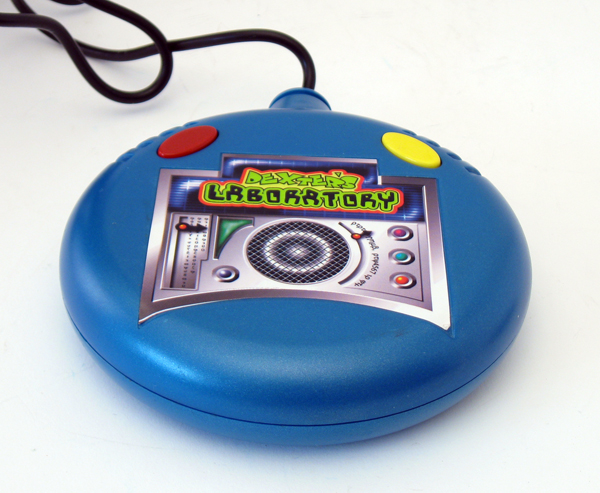 I typically avoid remote control robots. They just don't work for me. DWR somehow does. The walking motion is a predictably halting shuffle. But that second button fires the chest missile, which is terribly cool. Both buttons activate lights on the bot's chest and within the cockpit. 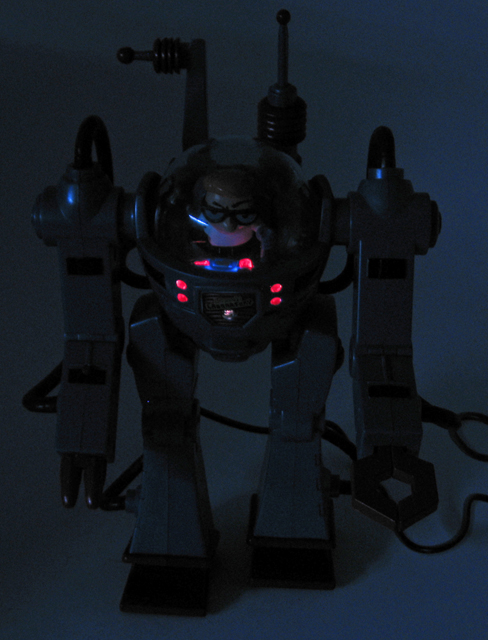 Mostly, I respond to the lovingly derivative design, executed in a spirit of fun. In every respect, the details far exceed what Trendmasters could have gotten away with. 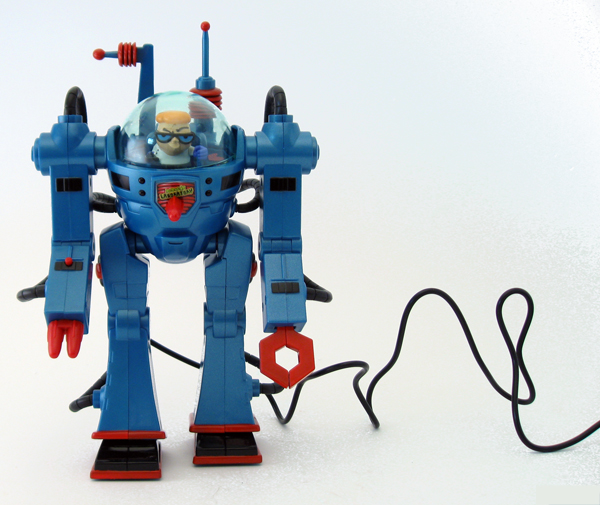 DWR fits in surprisingly well with other, more refined, mecha. 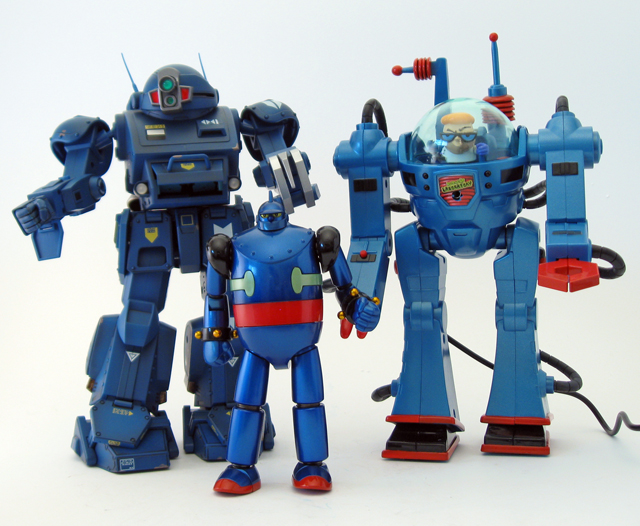 I really need to pick up the series on DVD as it was one great cartoon. Did you see that episode where he went to Japan to show the Japanese kids his robot and they were all unimpressed because it was so American and outdated and the Japanese kids had these sleek chogokin Gundam style robots. The best episode ever!

Great item and it fits right in with the collection! Cheers

btw does anyone remember the speed racer tribute episode or the sentai thing they did with the family?

"btw does anyone remember the speed racer tribute episode or the sentai thing they did with the family?"

I remember the speed racer spoof episode in that show, but I've forgotten the name of the episode.

The sentai robot Dex & family piloted to fight the 50ft. ax-headed monster was in the same episode that Modcineaste brought up. It was an one-hr season finale called "Last But Not Beast" This is my all-time fav ever since it featured The Justice Friends & the superstrong Monkey.

This episode also won me over as a devoted viewer b/c at first I thought it would suck b/c of Dee Dee. I couldn't tolerate another cartoon character who reminds me of Elmyra Duff. Thank God she proved me wrong.

Dexter was an amazing show, especially if you were a fanboy. ^_^ I've got a Dexter figure hanging from my rear view mirror, and one of his smaller (non-electronic) robot suits sitting in the living room. I think I have his whole line of toys in storage. All paid some tribute to various anime shows, none more so than his Gatchaman-inspired eagle fighter/robot. Great stuff!

You guys are piquing my interest. I'll have to dig deeper.

Interestimng toy, but if it's not the famous dodge ball firing Dextransformer, I don't want it :)