Mutant Chaos debuted as the fourth and final hero Mutant in the Mutant Zone I series, and has become the flagship character in the Real x Head line. I am pretty comfortable in believing that more Real x Head figures have come out with a Chaos head on them than any other design… I make the Chaos head distinction for a reason. Mutant Chaos is described as a shapeshifter, and is capable of taking on a variety of forms. In the name of conciseness, and in the spirit of Halloween, I am going to try something different in this review and discuss Chaos in all of his forms that use the original Mutant Zone parts (and one that uses a Mutant Zone II part, but we’ll get to that). I will leave the two more recent all-new Chaos sculpts for separate reviews. So, let’s get started as we look at the direct Chaos ‘family’.

First off we have the figure that started it all, Mutant Chaos. Unlike the first three Mutant Zone figures (Head, Evil, and Bigaro), Chaos was 100% new parts. Mutant Chaos is a shapeshifter, and in his default form he appears to be in something of a permanent flux state. Mutant Chaos still has the characteristic three fingers and toes of the Mutants, but he also has some bits that look like armor, and the prominent weapon hand, as well as the distinctive eye, which is actually a plastic doll eye. Mutant Chaos’s body is a mess of different textures and shapes, but it does not feel random and thoughtless… the mess flows around regular body features, and it looks like Chaos has deliberately morphed smooth legs and feet as well as a hand so he can function alongside the rest of the Mutants. The great Roger Harkavy, a lover of vinyl toys, has always emphasized the tactile experience of hand-sculpted vinyl figures, and Mutant Chaos really brings this idea home for me. There is just so much detail to take in, from the big smooth armored-looking piece on the chest, to the wrinkly and pod segments on the head and the little tail out the back covered in scales. The left arm looks like a weapon, but is described as Chaos’s probe hand, which he uses to sample new forms so he can take those shapes. I like to think it still functions as a weapon of some sort as well. Mutant Chaos is articulated at the regular RXH neck and shoulders, but also features a cut around the ‘elbow’ on the probe arm. The might seem like a mostly useless joint, but it actually enables you to angle the probe different ways and get Mutant Chaos into some cool poses, especially if you like to pretend he can also use the probe as a ray gun or some such. 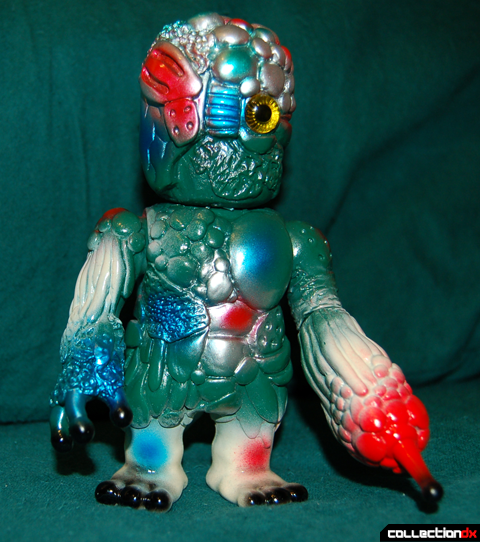 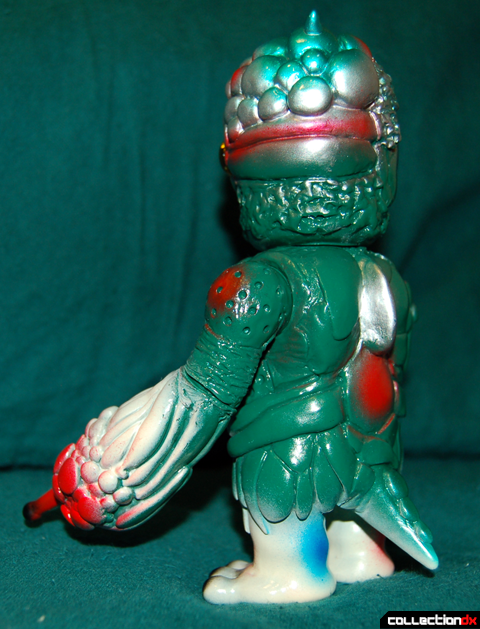 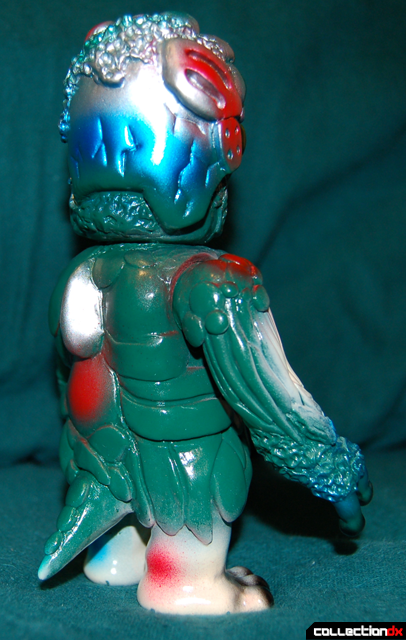 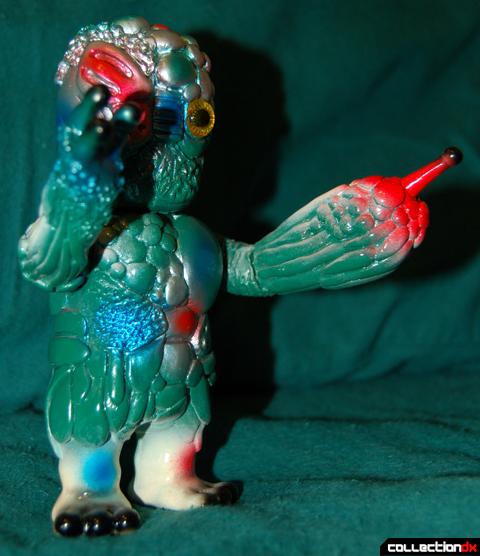 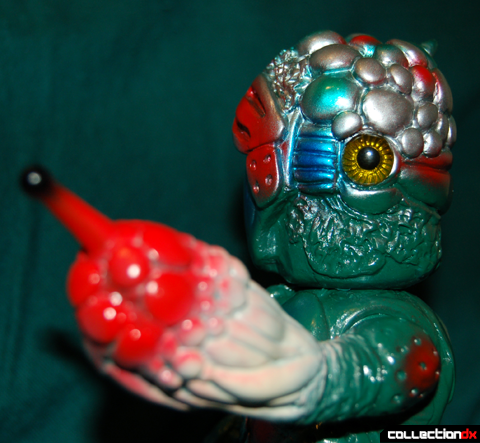 This particular Mutant Chaos is the Frankenruge variant, a tribute scheme to Frankenruge, a villain kaijin (humanoid monster) from the 1972 tokusatsu show Barom-1. Frankenruge is one of the most popular villains from this much scarier show than the usual Ultraman-style tokusatsu fair, and an extremely hard to find vintage kaijin vinyl figure. This was an early Chaos release, and the unsymmetrical paint scheme from Frank translates well onto the Chaos canvas.

Now we get into the Chaos mutations, made possible by the brilliant interchangeability of the Real x Head figure parts. I am going to cover the next two quickly, as we’ve now seen all the parts that make them up previously.

The Fighter Chaos form combines the Mutant Chaos head and arms with the regular Mutant body. The smooth and clean Mutant body contrasts nicely with the complex Chaos head and arms. I think I have more Fighter Chaos than Mutant Chaos in my collection and this is one of my favorites. This guy is molded in black vinyl with an overall metallic tone added and really luscious metallic sprays over top. He is really glossy and full of luster, and I like how the darker colors and tighter sprays bring together the dissimilar body and limbs. 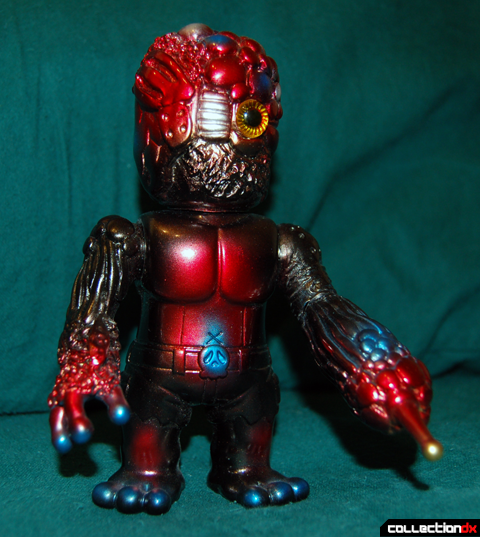 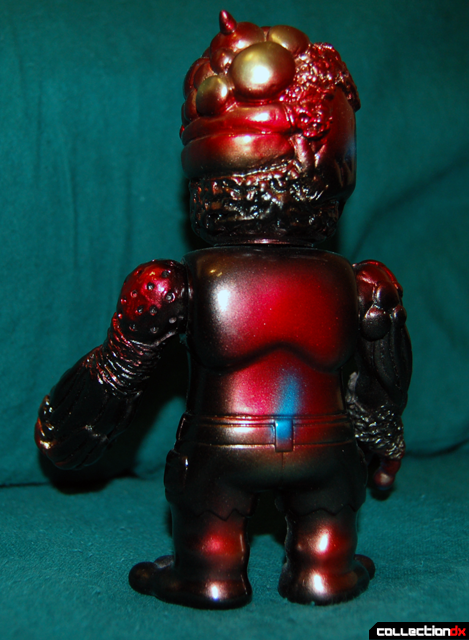 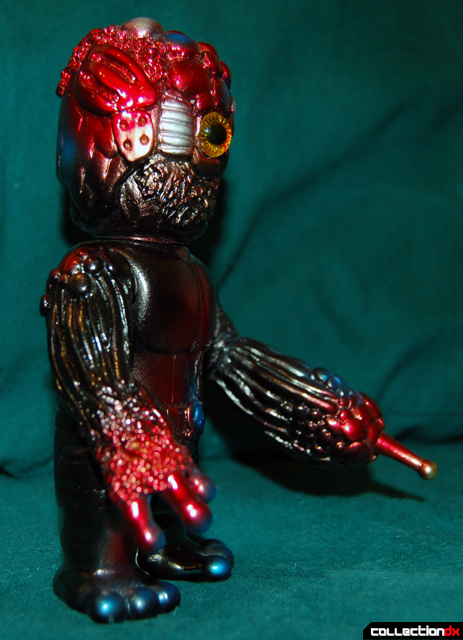 The Chaosman form combines the Mutant Chaos head with the regular Mutant arms and body. The Chaosman combination seems like it functions much better as Chaos’s everyday form working alongside his fellow Mutants. The Chaosman design works really well with either contrasting spray styles on the head and body, or unified with one paint scheme across the whole figure like seen here. This particular Chaosman is from the Junkspot shop in Japan released as a store exclusive from an event a few years back. We also see here the bandanna that has become common (but not definitive) on Real x Head Mutant releases. On the Chasoman design, the bandanna does a great job of hiding the neck joint and bringing the pieces together even better. You can even pull the bandanna up over the face for a ‘bandito’ look to your figure! 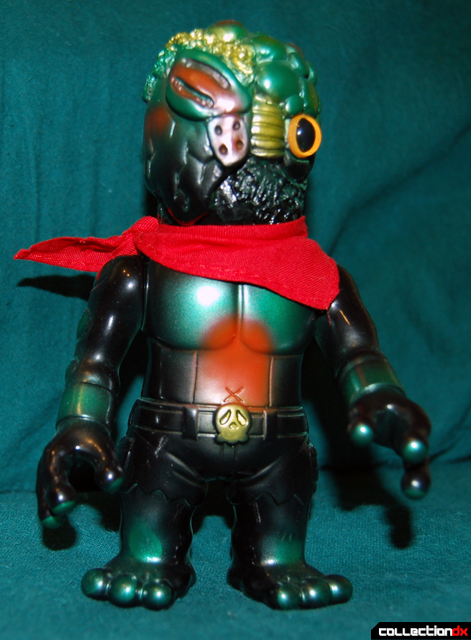 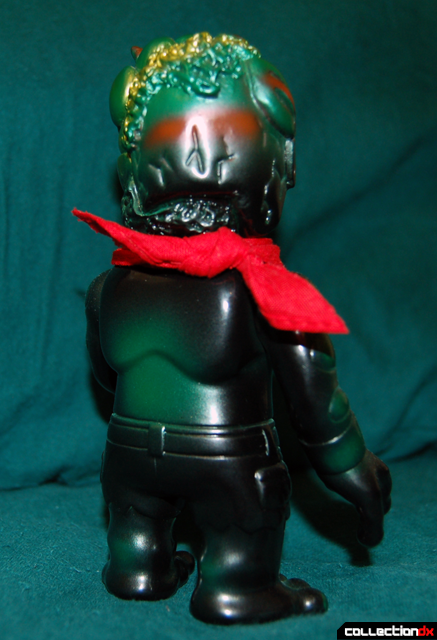 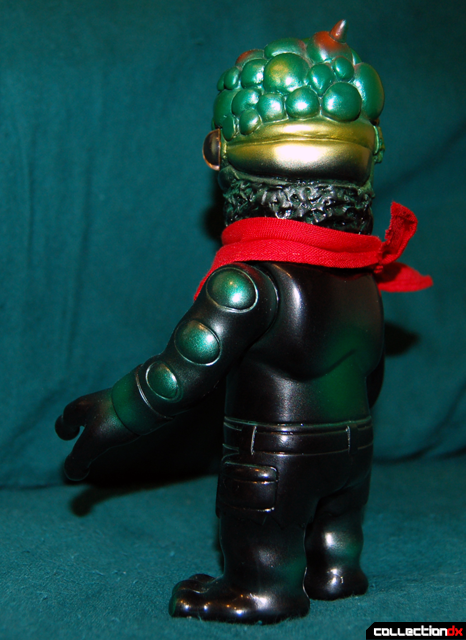 The last figure we’ll cover today is the Armored Chaos, a Chaosman wearing an armored vest featured first on the Mutant Zone II Akro-kaizer, a figure I have not covered yet. The armor is another mix-and-match-able piece, slipping over the regular Mutant body. The armor spreads the arms out a little bit, but does not actually hinder articulation of the arms (the vinyl is soft enough that you can push the arms past the armor to do a ‘YMCA’ pose). The armor DOES actually hinder head movement a little, due to the shape of the Chaos head on the right side, but this is minor. This guy is a tribute to Beetleman, a tokusatsu character that I do not actually know anything about (I believe he is pretty obscure). The Armored Chaos is neat for two reasons: first, the body and arms are molder in orange vinyl, while the head and armor are molded in grey, something unusual for Real x Head releases, and second, this is the only production Armored Chaos release, and surprisingly easy to find even though he is really quite cool. 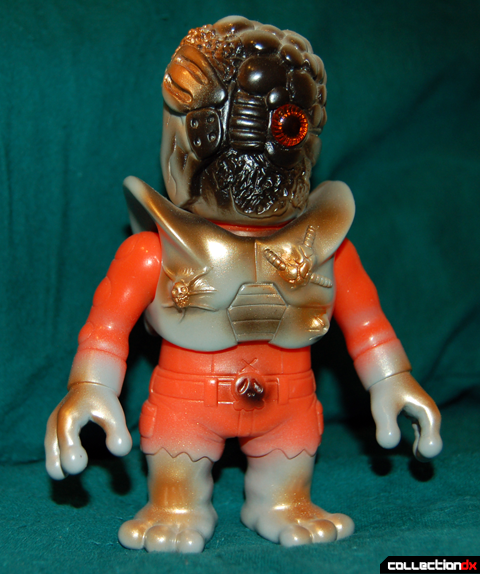 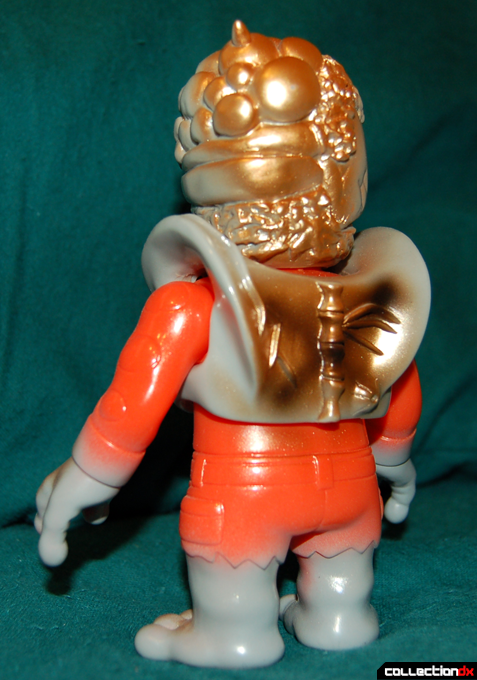 That’s it for the original Mutant Zone I/II Chaos mutations, but not all of the Chaos figures, or all of the figures using Chaos parts. I will continue through the series, covering Mutant Zone II next, and then moving to the new Mutant Zone III releases and Chaos Adult figure, where the story gets really interesting!

Kick ass review, Ben. Mutant Chaos is probably my favorite RxH sculpt. I just love the proportions and the detailing of the sculpt.

Brian Flynn sold me my very first RxH figure in '07 at SDCC. It was the "Bruised" (translucent dark blue) Chaos Fighter. I had ZERO idea what/who it was...in fact, it may just have been one of my first designer vinyls! Ha!

Anyway, something about the sculpt and colors just spoke to me. Since then, I've learned a lot about RxH, and designer vinyls in general...especially fight figures. I traded that Bruised Chaos Fighter to Matt Doughty at Onell for a robot toy, but I still have a few other cool Chaos figures (all glowies, of course!), and he'll always be a favorite of mine.