Autobot Tomahawk is a character making his debut in the Hunt for the Decepticons toyline. No information is available on him except for on the back of his packaging card:

“TOMAHAWK may be slow, but he's made a career out of taking on DECEPTICONS faster than him, and blowing them out of the sky. He uses himself as bait to draw in overconfident DECEPTICON aces, then he fills the sky around them with heat-seeking missiles. JETBLADE and TERRADIVE don't stand a chance.”

Oddly, though released during the Hunt for the Decepticons promotion, Tomahawk does not have either the identifying sticker on the front of his packaging or a Coordinate Code on a slip of paper inside.

Tomahawk’s vehicle mode is a generic ground-attack helicopter. (However, there is unconfirmed speculation among Trans-fans that he may be named after- and some details of his vehicle mode’s look based upon- a large troop transport helicopter made for the G.I. Joe franchise. I dismiss this as coincidence even though Hasbro owns both the G.I. Joe and Transformers trademarks in the United States.)

Only his main rotor and a small targeting sensor under the nose have any movement. (I don't count the tiny tab-like landing gear since they can’t really retract and don’t have independent wheels.) 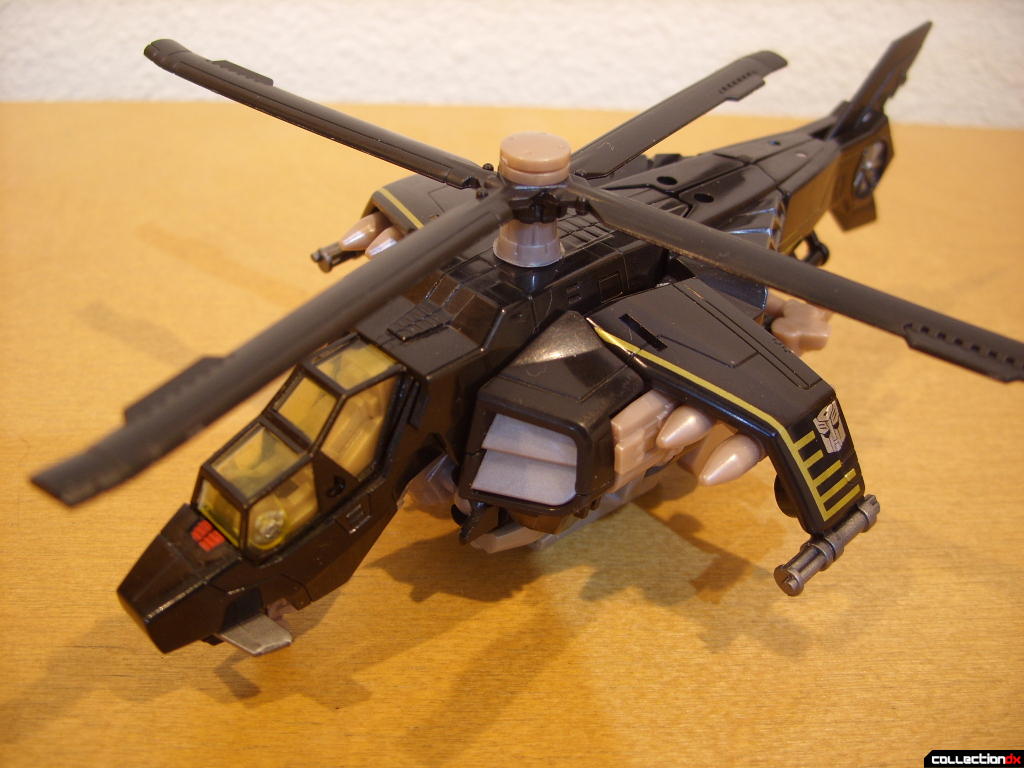 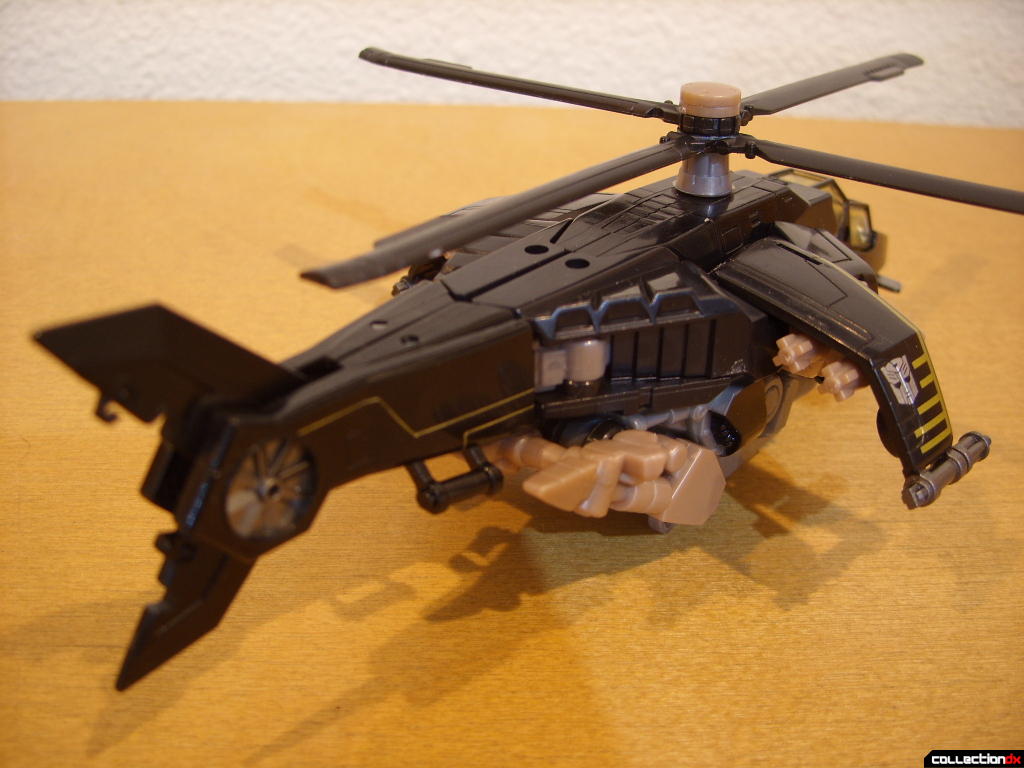 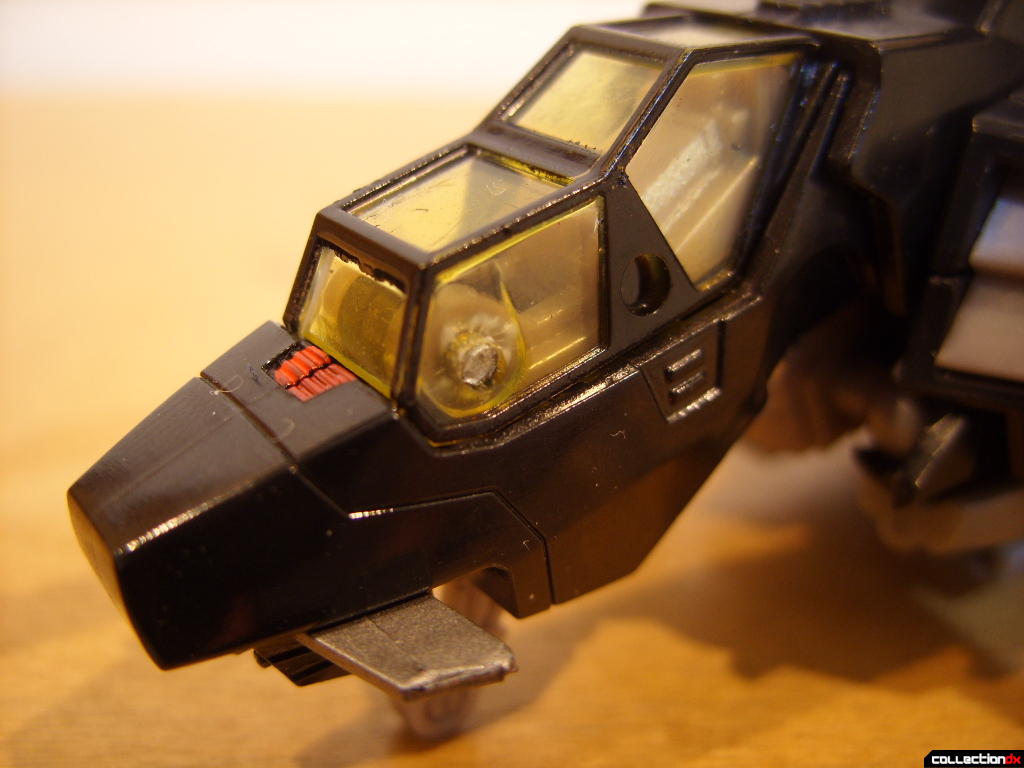 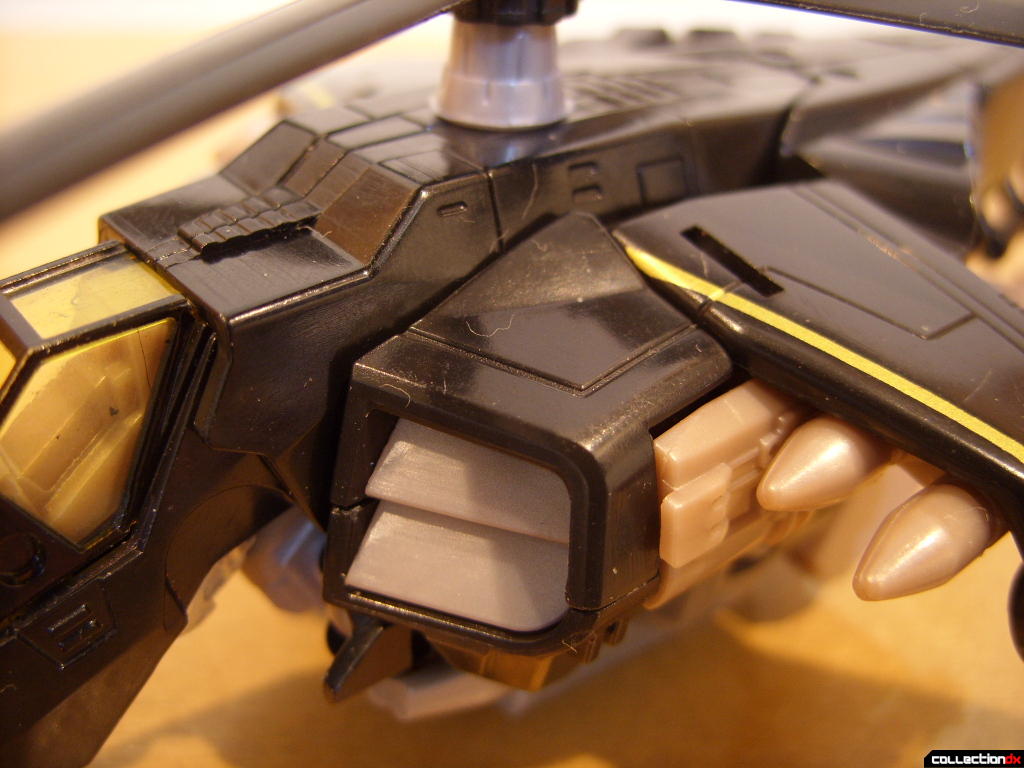 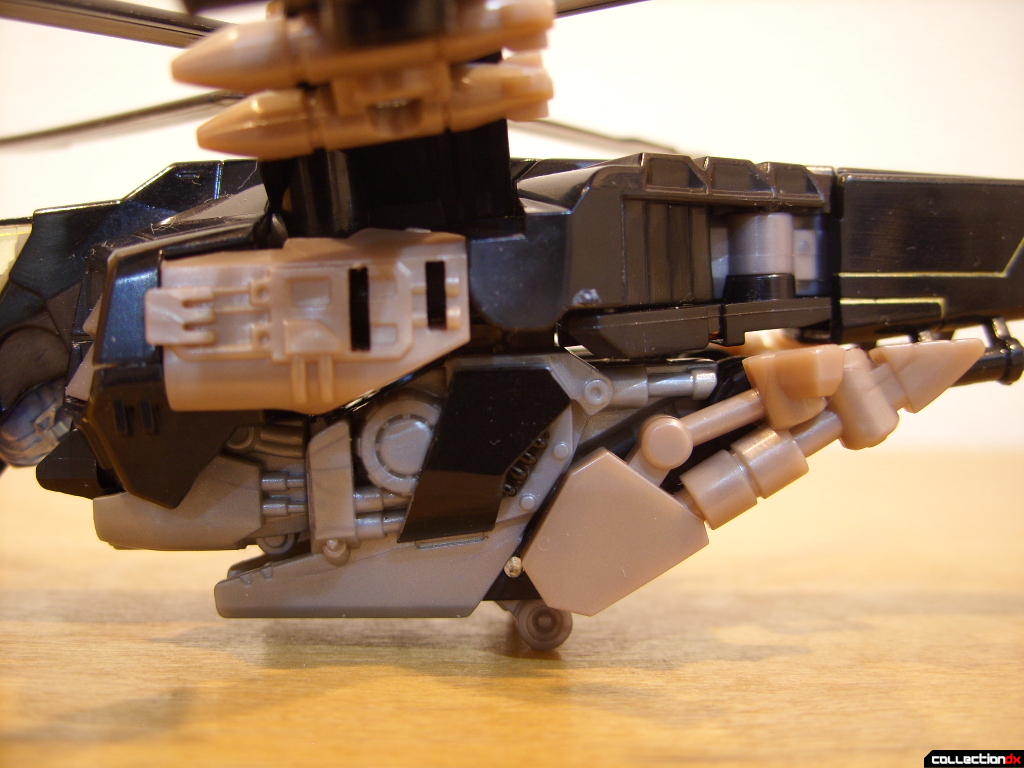 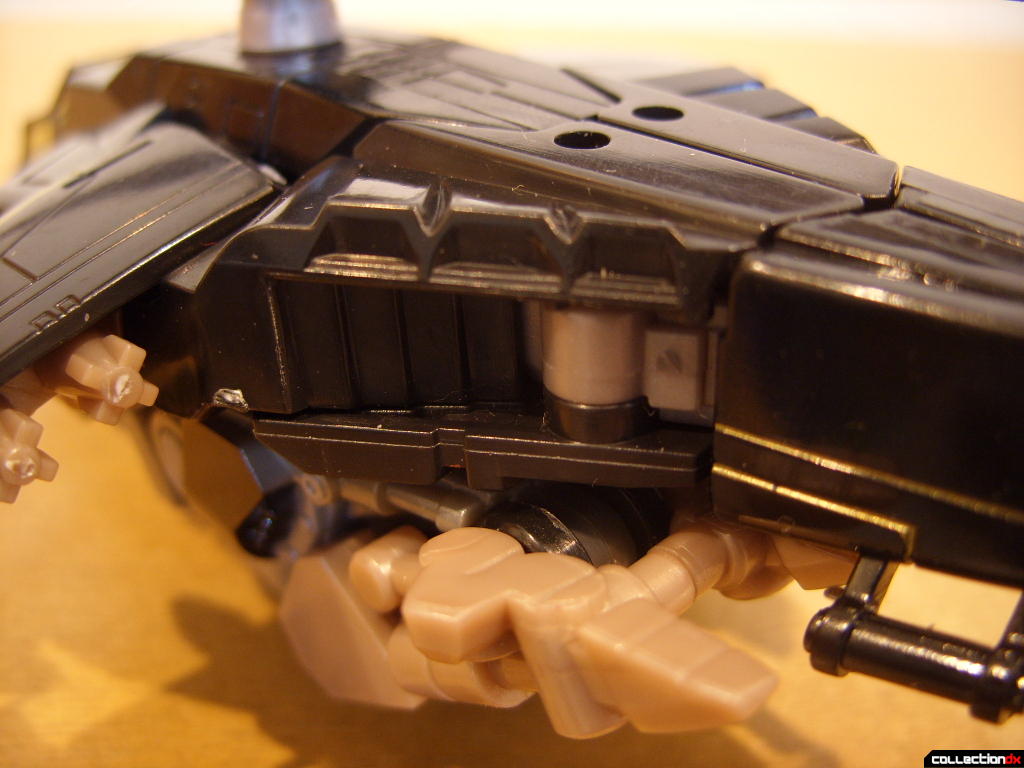 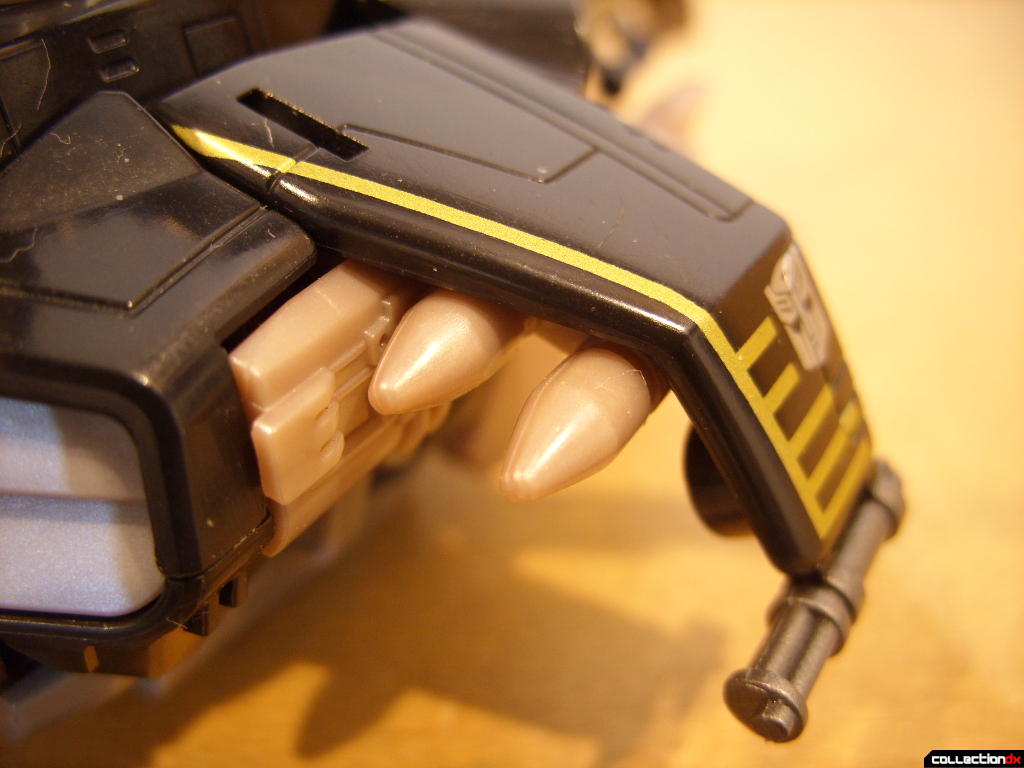 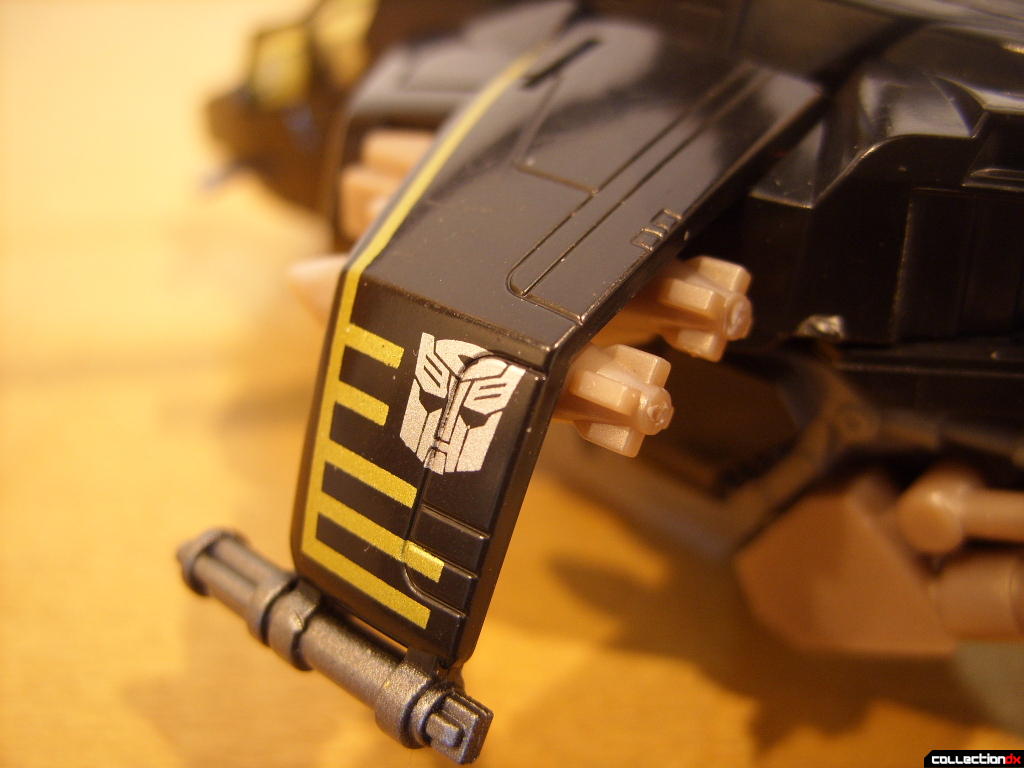 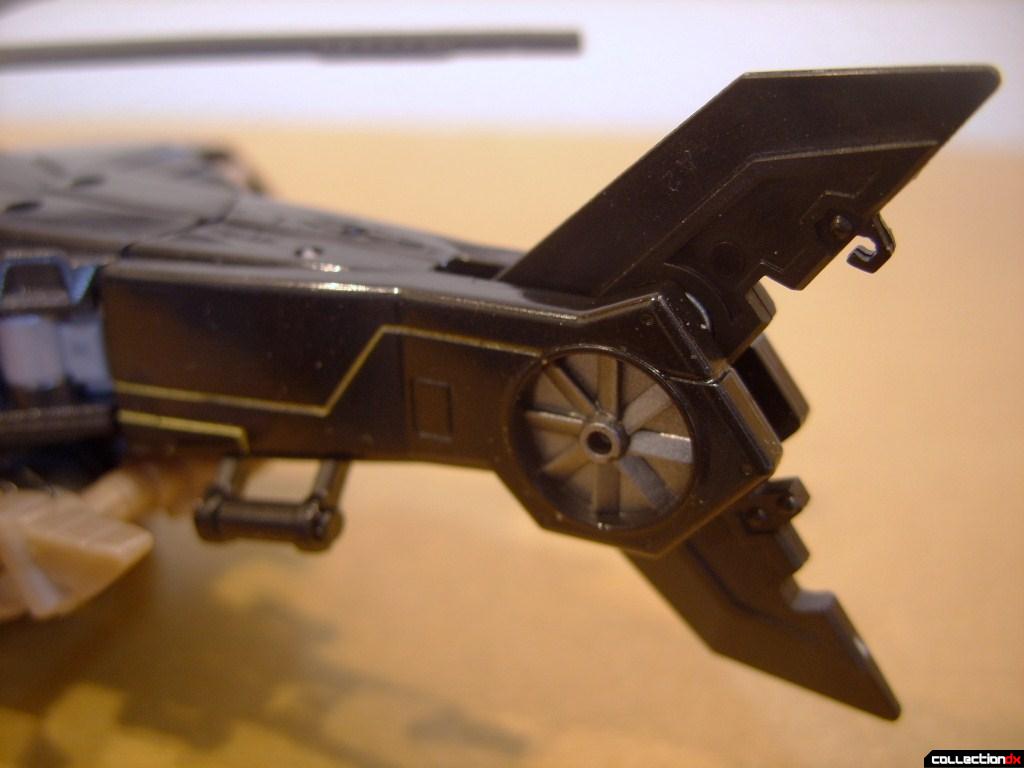 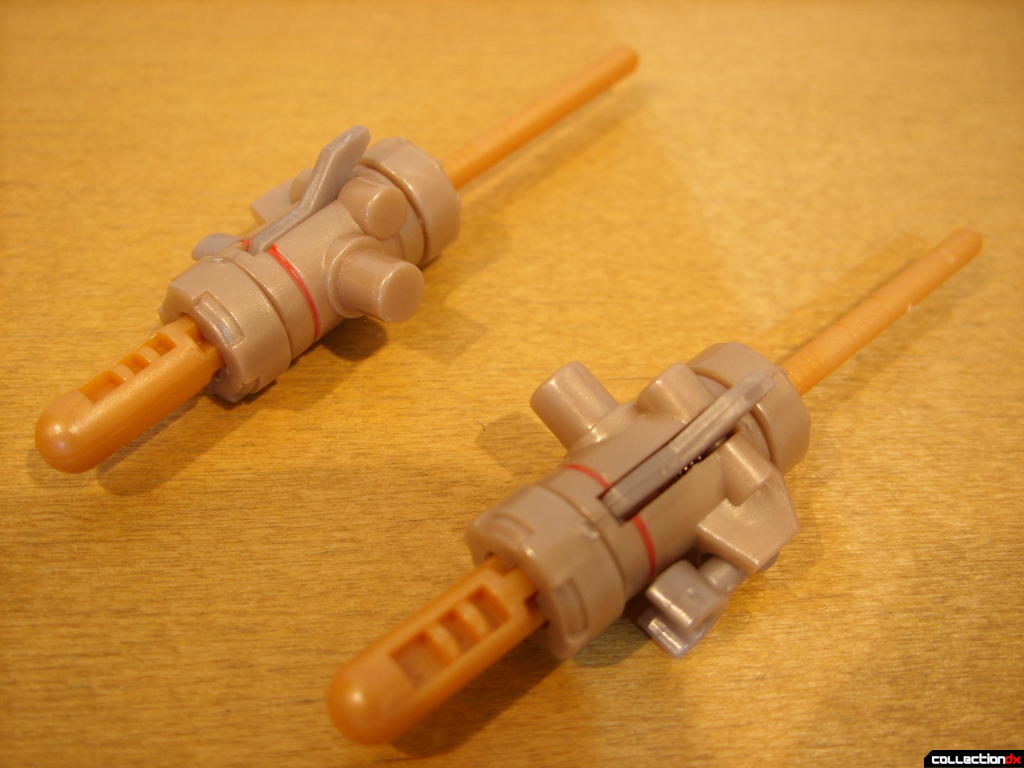 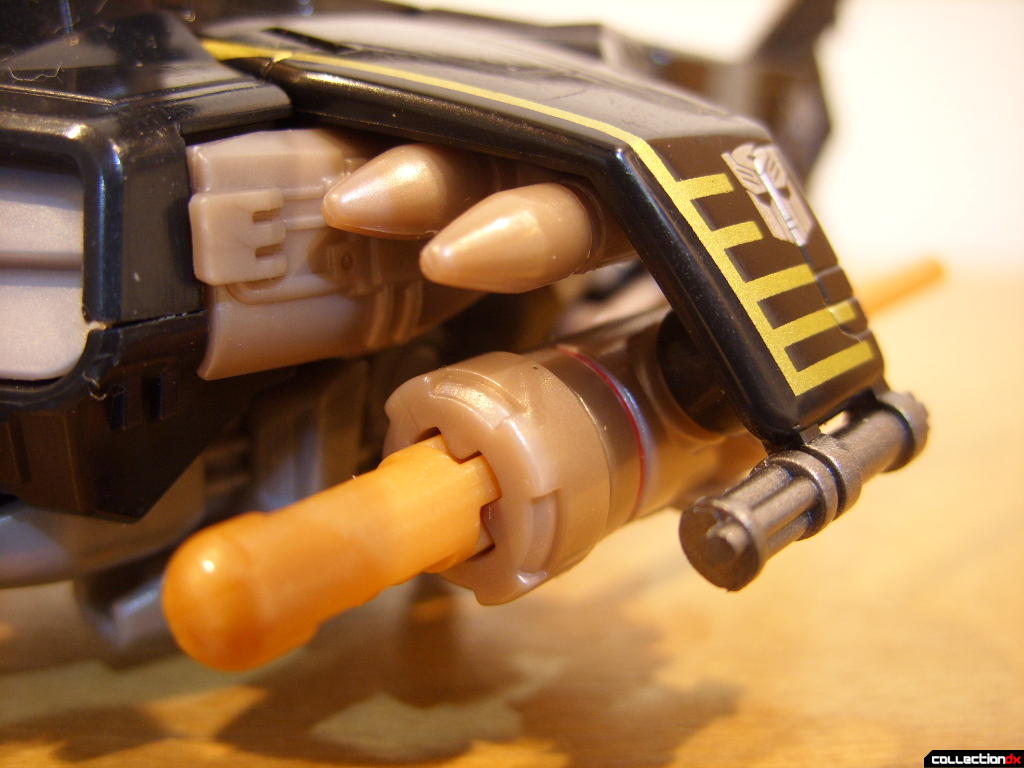 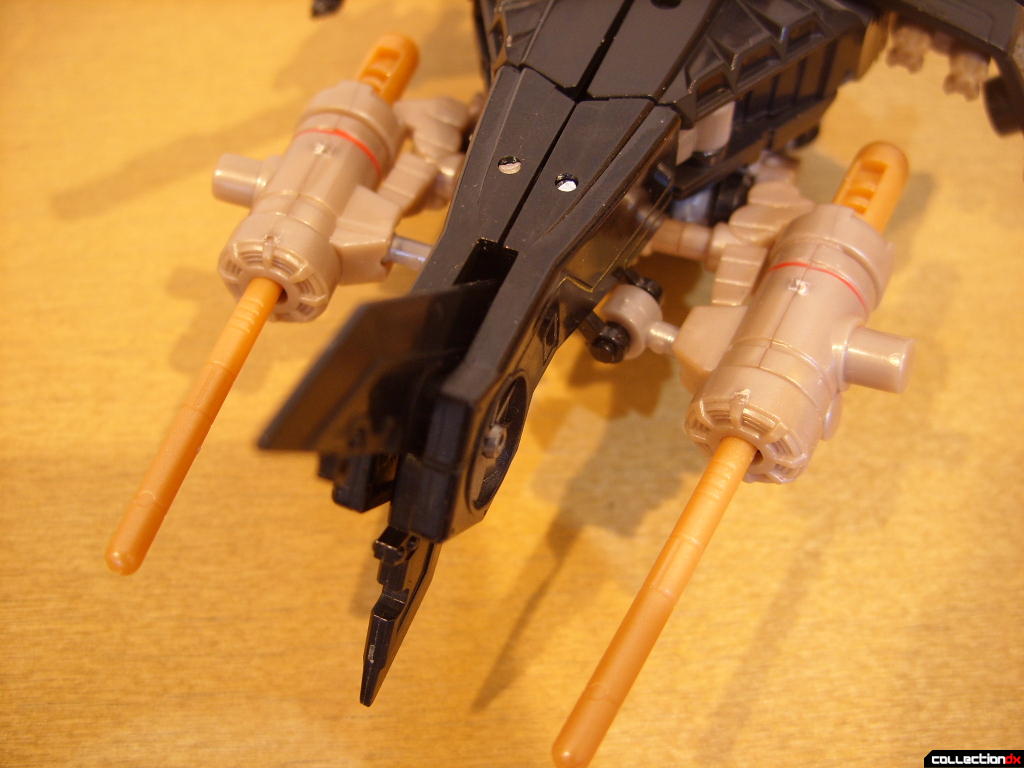 Tomahawk features an impressive range of motion. Honestly, the only thing missing is torso & wrist twisting! 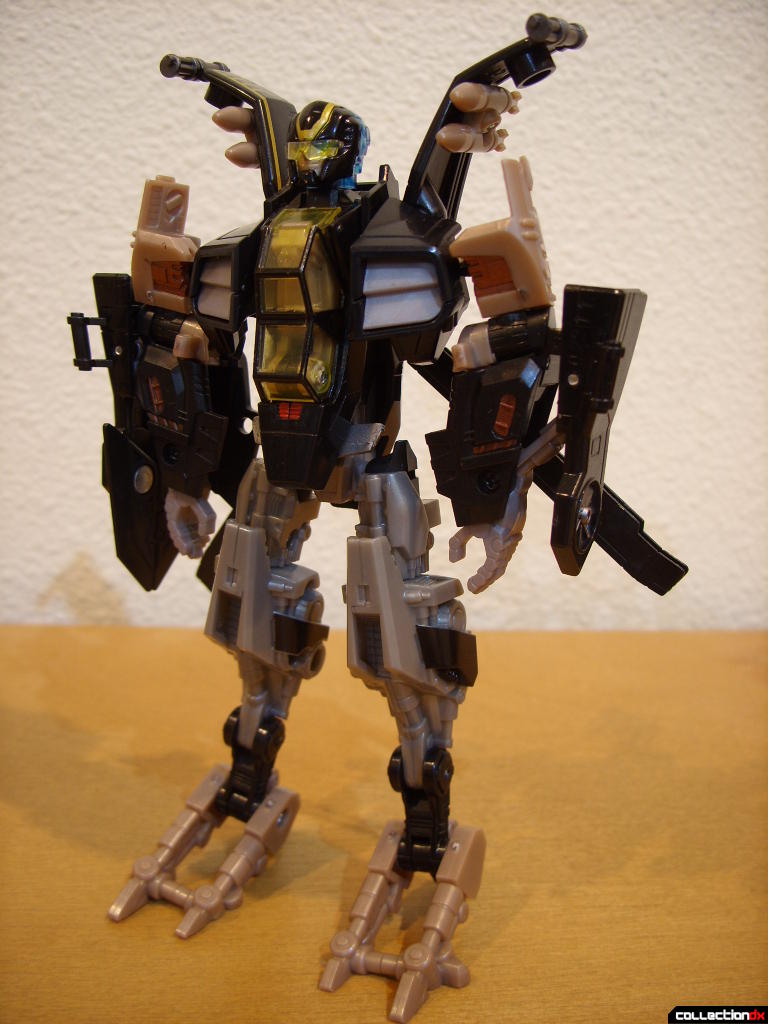 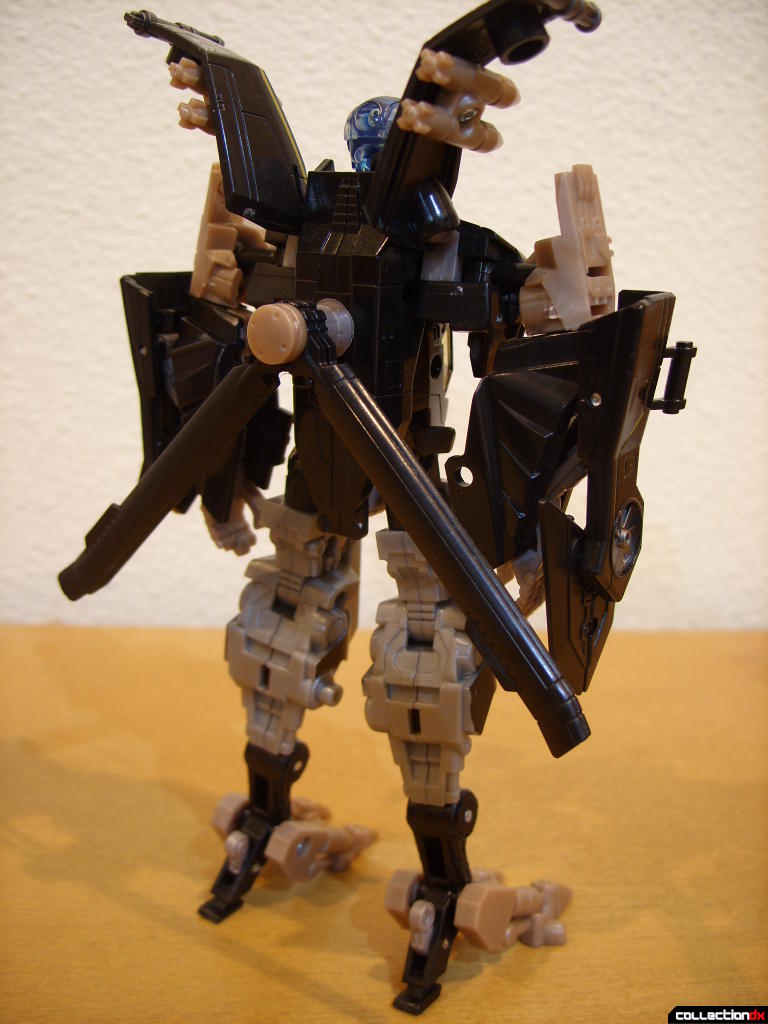 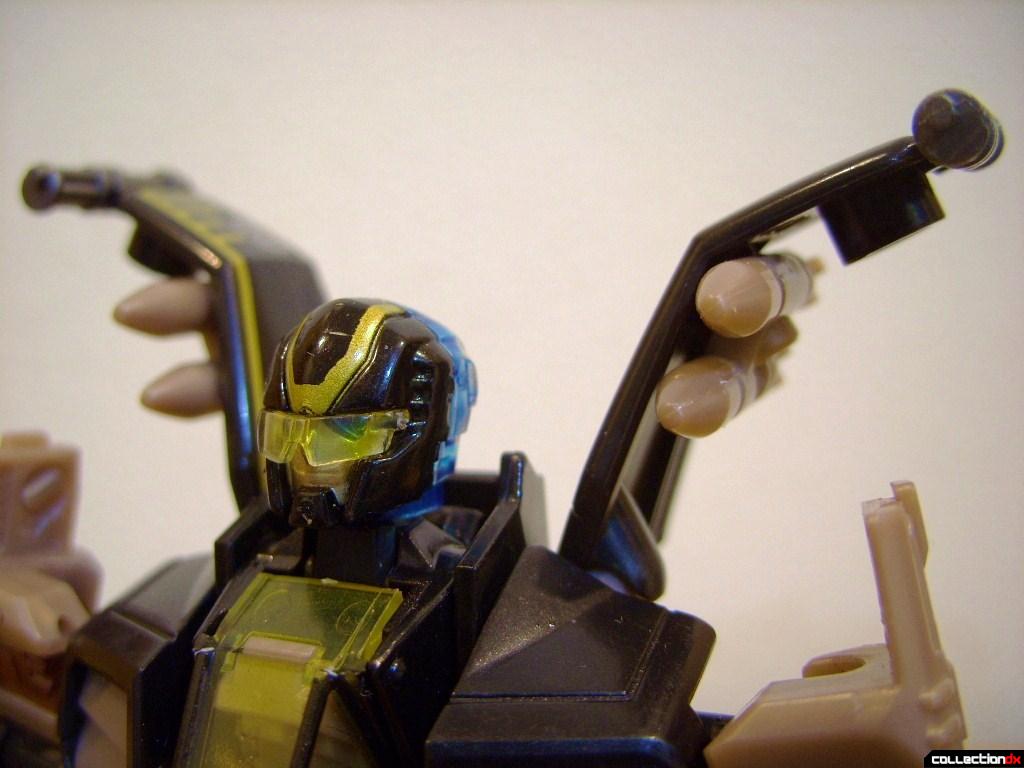 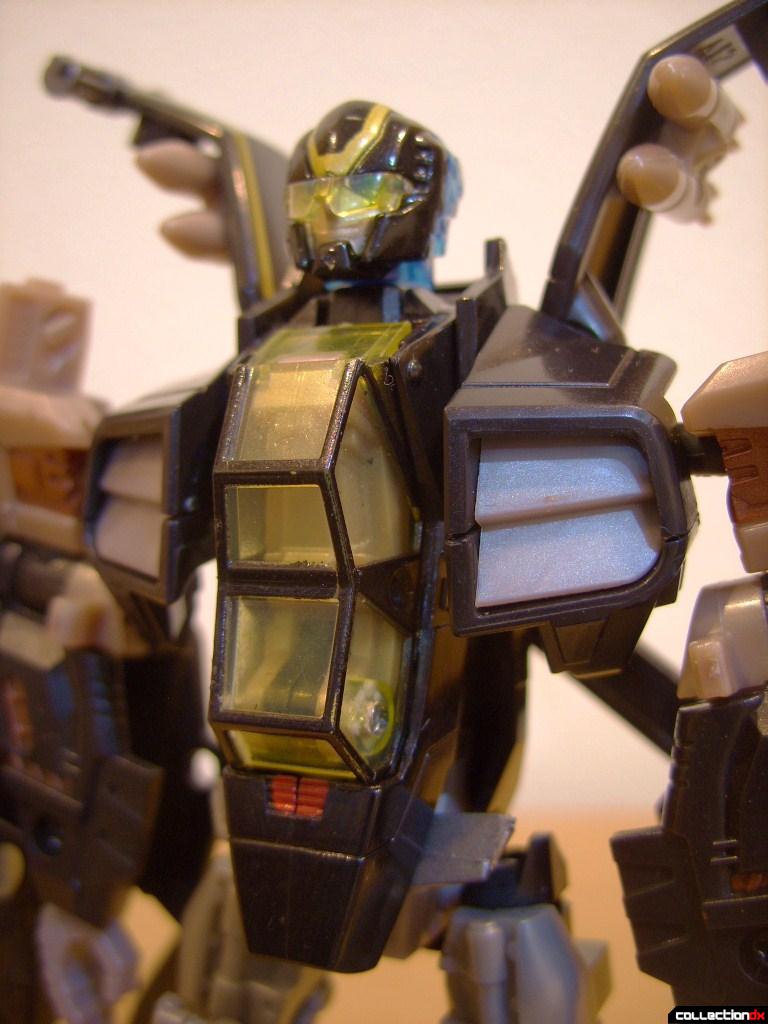 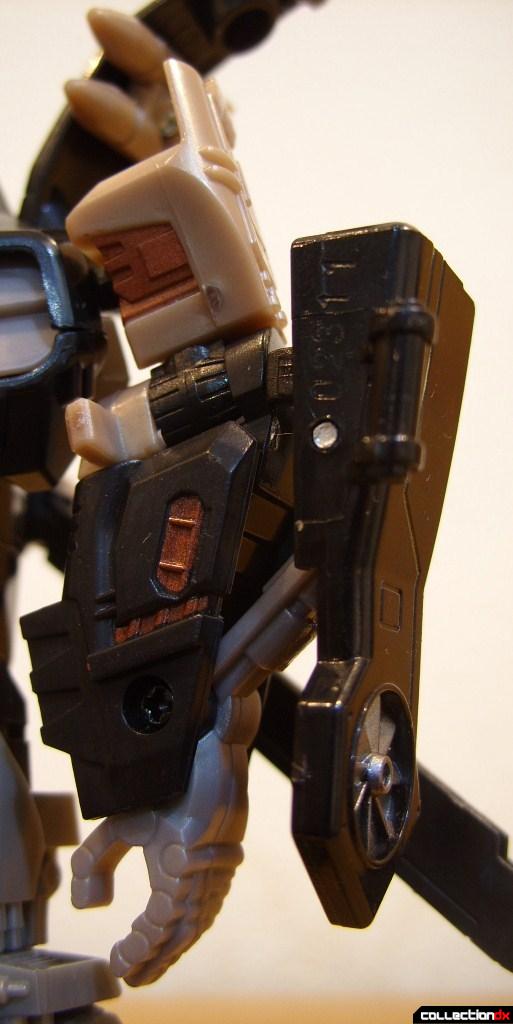 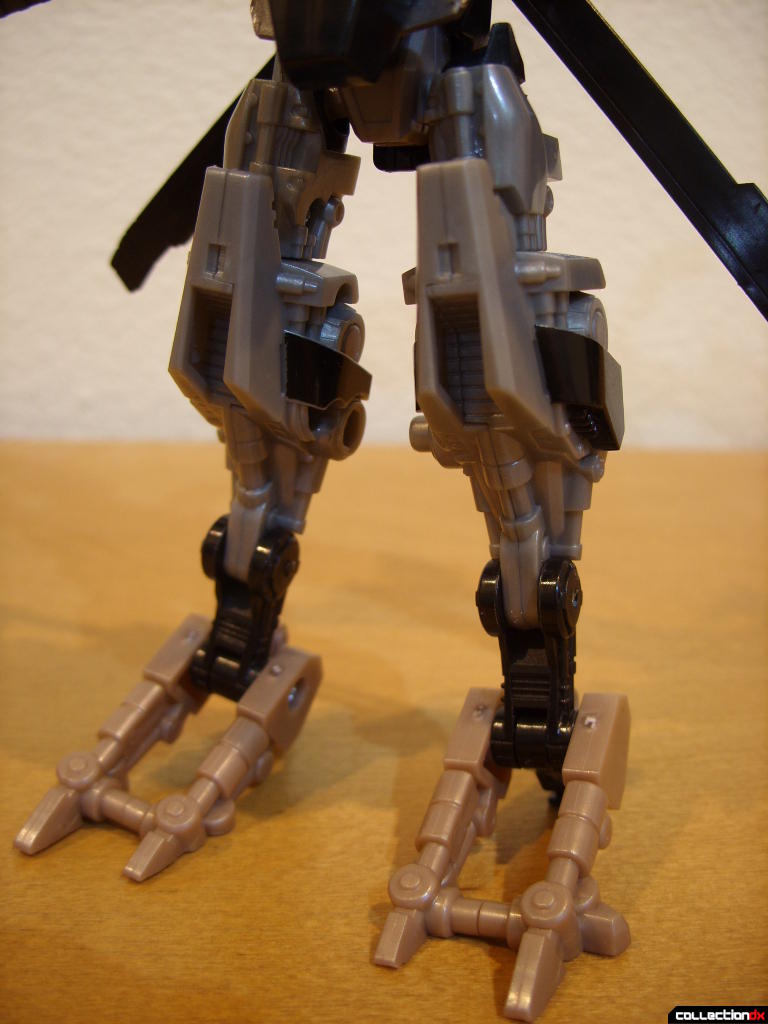 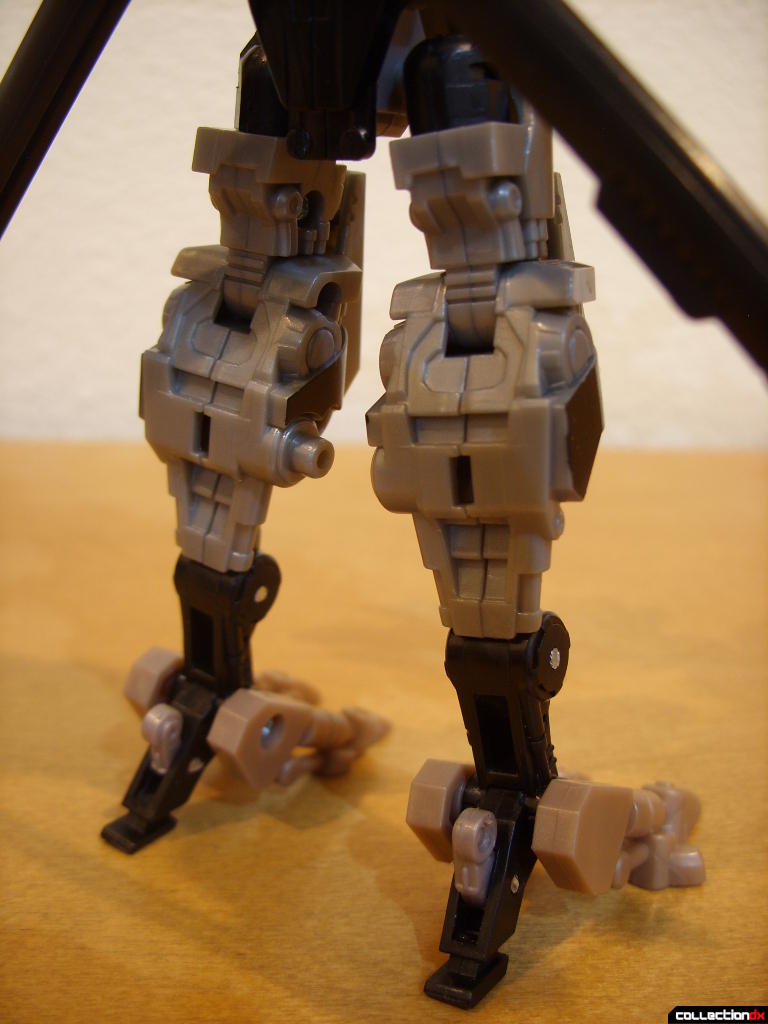 He has a yellow visor over blue eyes that feature light piping. (Huh?) 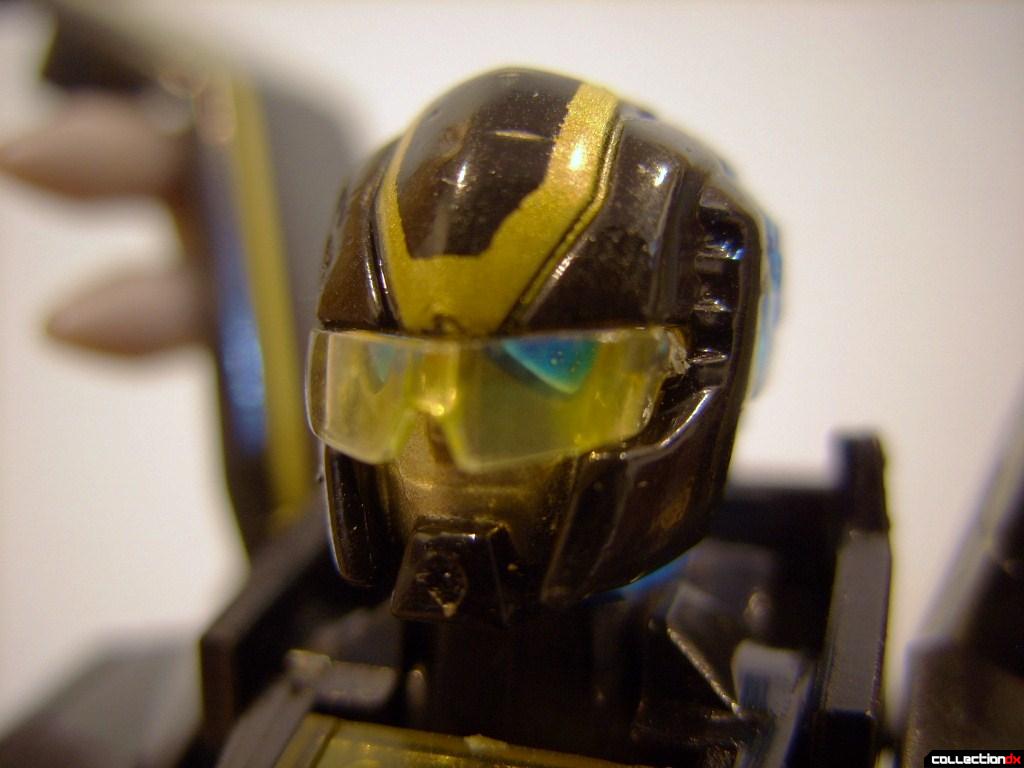 The missile launchers can be placed into his open-palm hands via the same pegs that hold them into the pylons. It is possible to attached them outside the forearms (the split halves of the tail), but they aren’t very secure when you do this. 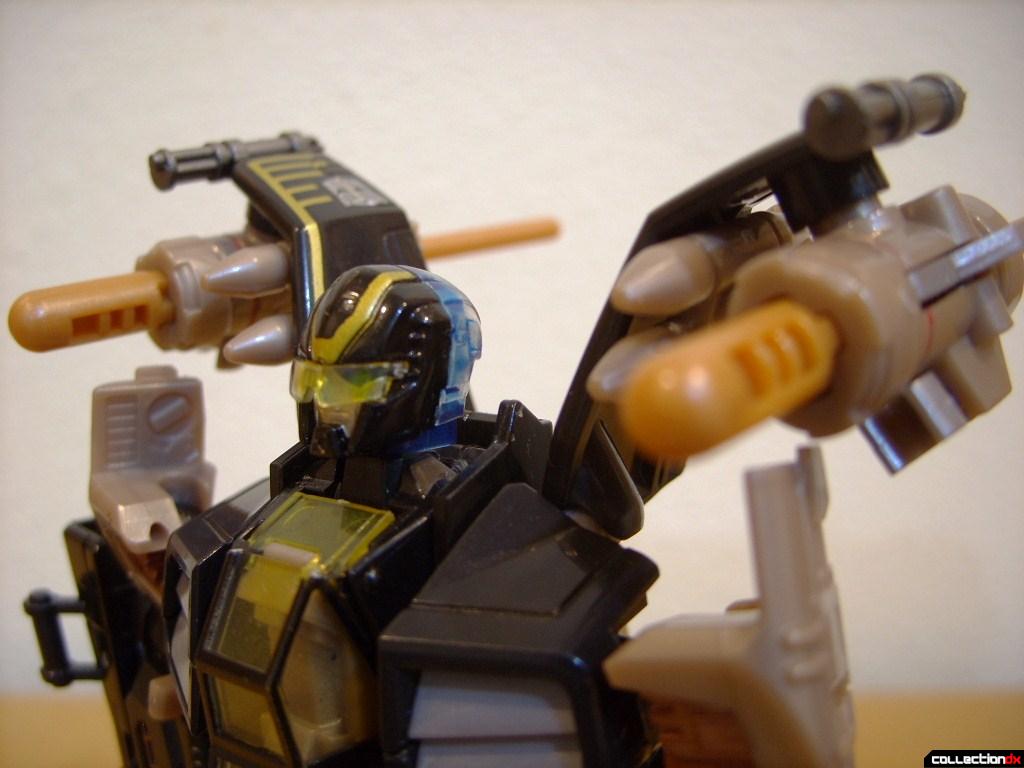 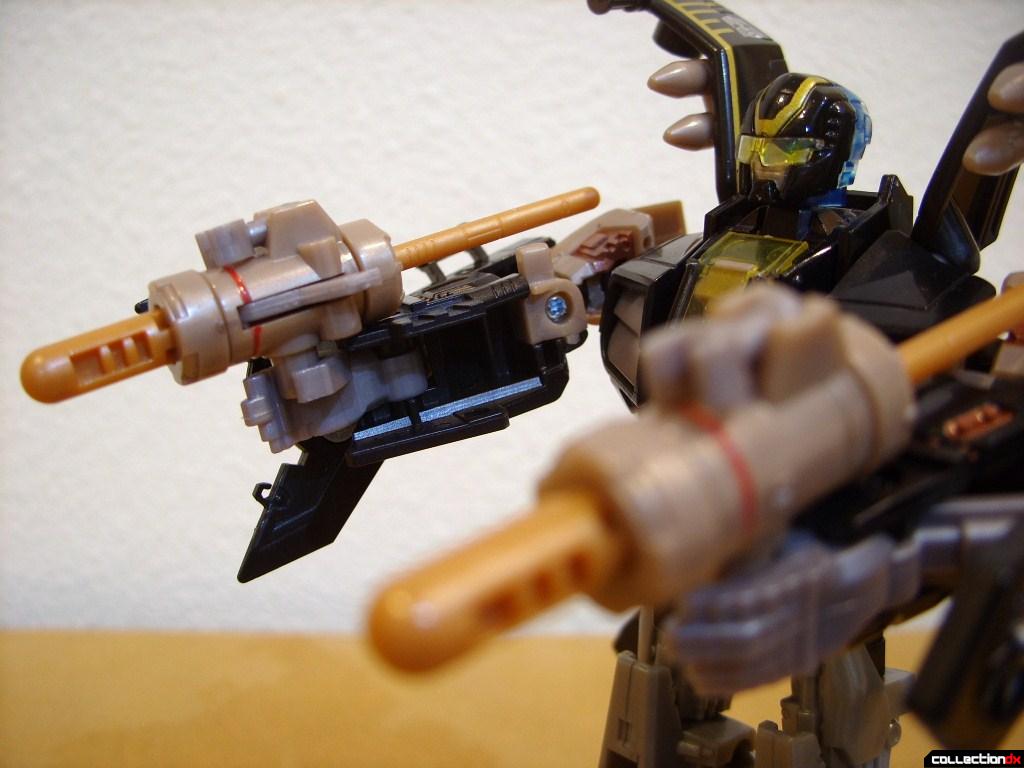 The right forearm also has a scissor claw that can be opened & closed. 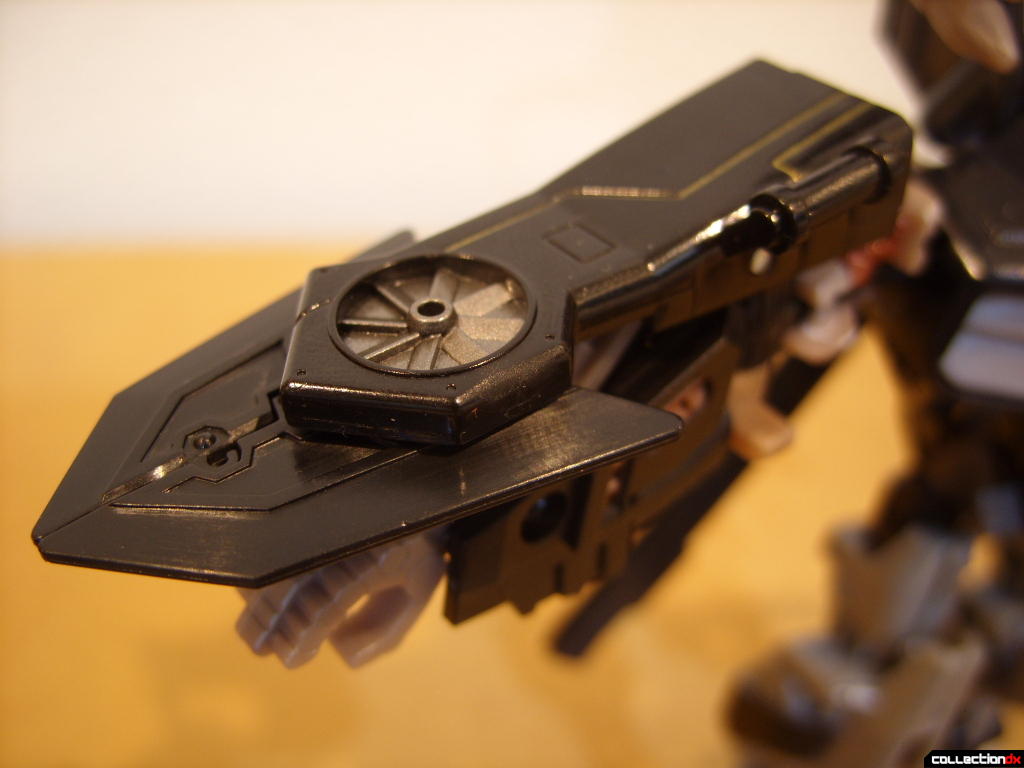 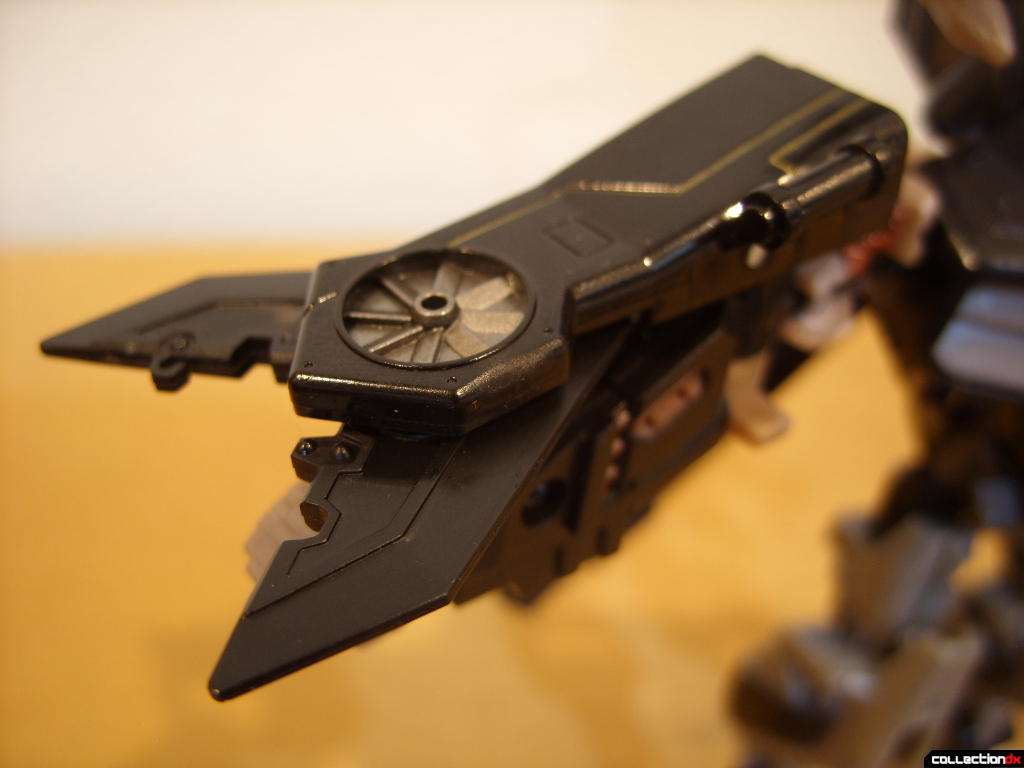 This toy has a very nice attack chopper mode. Gobs of missiles and guns under each pylon, an impeller in the tail, large integrated engines along the sides of the fuselage, and a movable nose sensor? Umm, yes please! The coloring works out very well, with small highlights of gold to break up the jet black coloring. When you get to the undercarriage, though, it gets very busy with robot kibble, but it doesn’t feel out of place despite the smooth and shiny upper surfaces. This feels like a nice, compact Transformer of old, with the weapons upgrade. Some might complain about lack of wheels in vehicle mode, but I’d say be thankful they gave us any landing gear at all!
My only complaints are why they set it up so that the missile launchers could be placed under the tail (that does NOT help the look at all!), and how the main rotor on mine sticks frequently when turning despite being brand new! 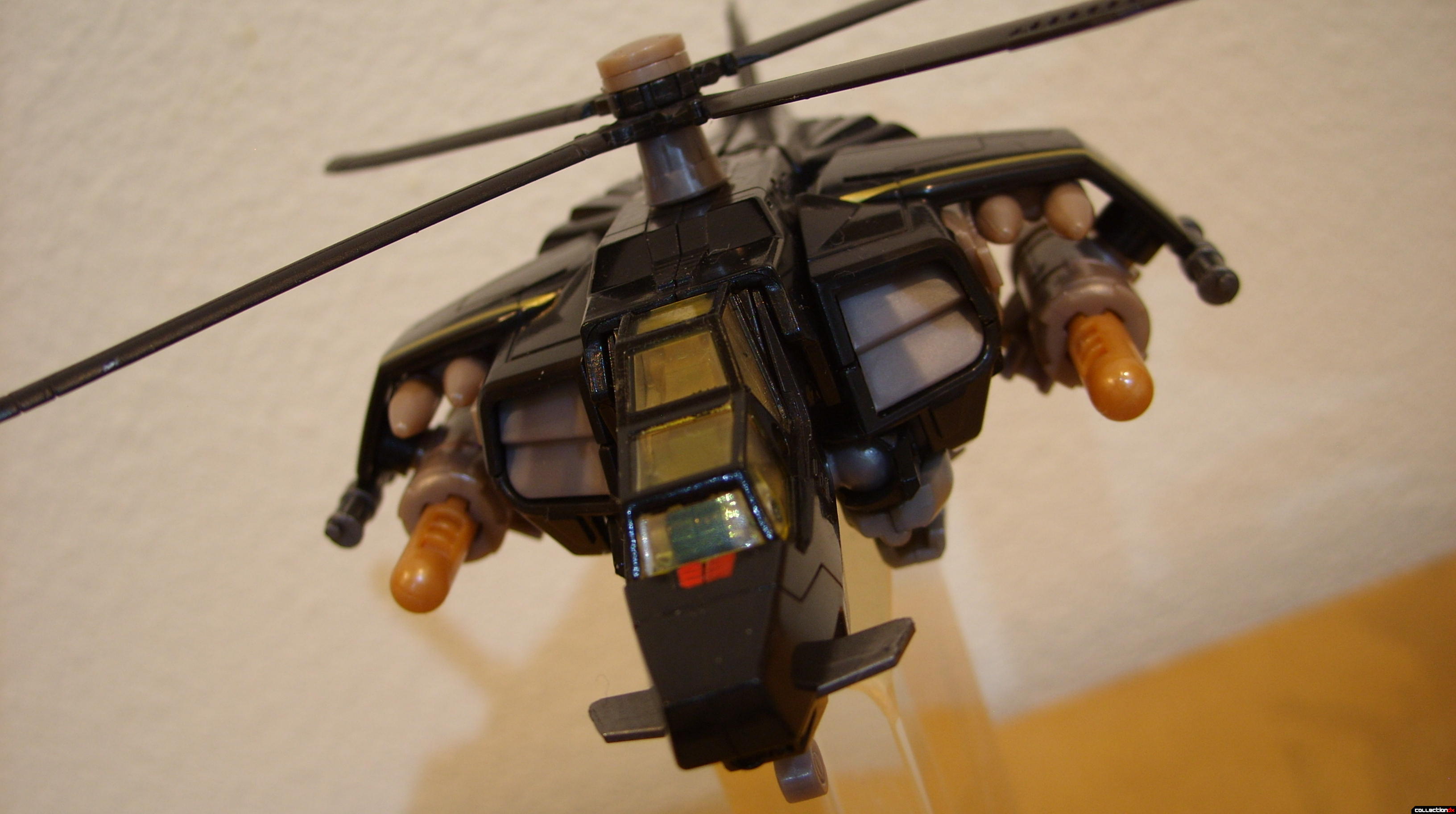 The transformation has some real sticking points, mostly in extending the shoulders away from the body, thus having to lift up on the pylons, and getting them past the retracted main rotor. Speaking of which, the left pylon on mine always pops-off that ball joint every time I transform him. Both pylons are fitted very tightly in there against the torso that I’m surprised that they don’t both pop off more frequently. (They probably knew the fit was tight, that’s why they made them ball joints.) Booooo! I also don’t like how the left tail section doesn’t snap into the left forearm even though the one on the right side does very easily. A rather inconsistent design flaw, I’d say. I was vaguely reminded of Voyager-class Decepticon Blackout (another helicopter-bot) in the way the torso shifts around, even though the 2007 toyline's Automorph Technology is not involved- there’s a lot of seemingly-unnecessary shifting happening, even though it is a bit on the exciting side. Still, makes it hard to hang on to when that much in the center of the toy moves during transformation. For a larger toy, that wouldn’t have been a problem, but here it is. (Oh, wait, it was a problem on the larger toy too. Hrmm...) 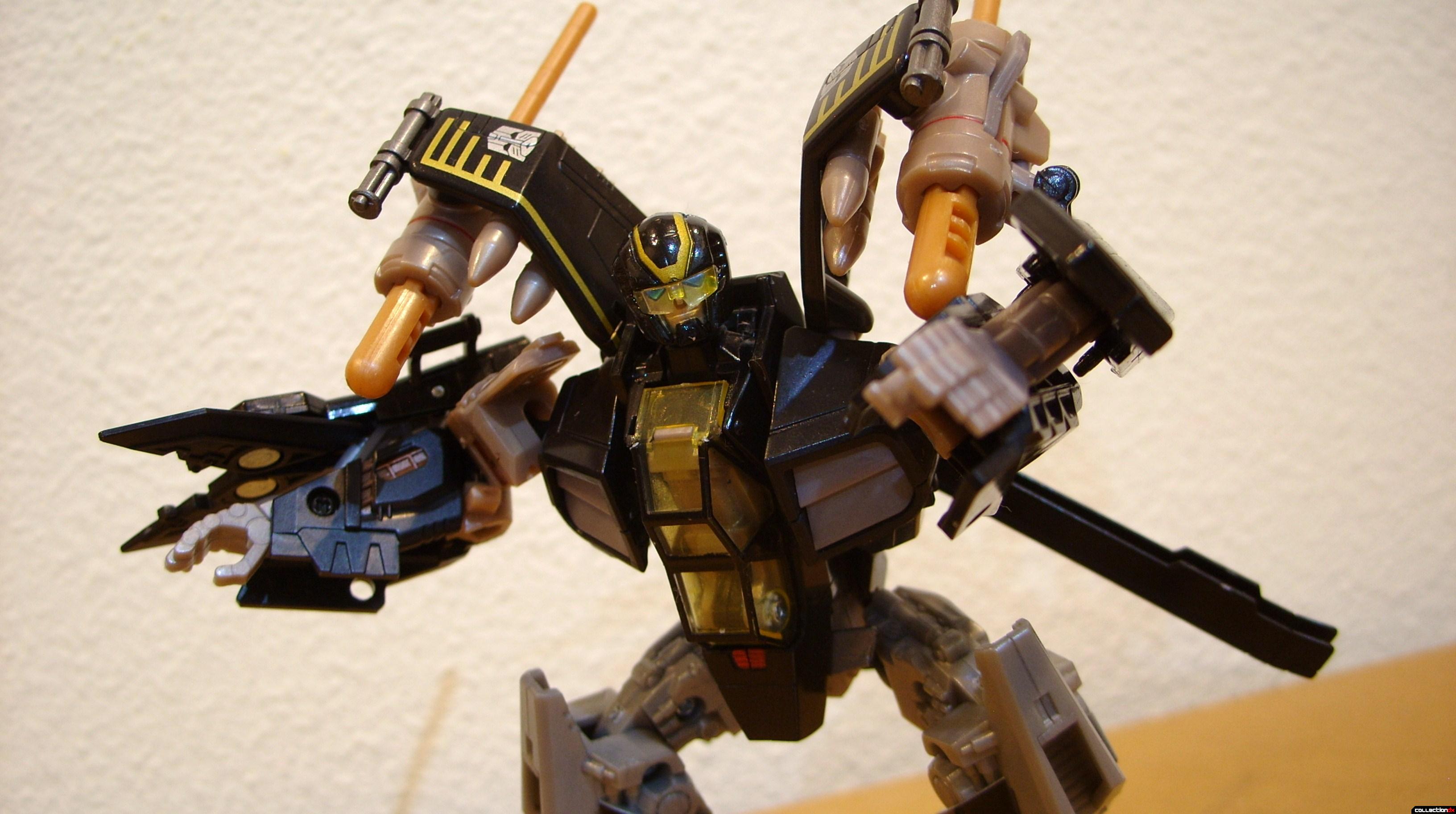 Oh, please- the whole “Snapping Pincers”- gimmick is such a lie! YOU have to move the blades; it’s not automated like the box would have you think. On top of that, the two blades aren’t even tied together with gears or levers. Talk about false advertising! Nice idea, just a real let-down.
I like how the main rotor collapses down, but it’s kind of a pain to have it floating around in back like that. It does interfere with posing once in a while too. (I tried to do the opposite- line the rotor up with the over-the-shoulder pylons- but it didn’t work very well and it was a pain to both set-up and undo.) Here’s one thing I really liked about this guy- all his shooting weapons become over-the-shoulder launcher systems. Not mounted on his forearms or chest or his back, but in a place where he retains full movement and can keep his hands free at all times. Very bad-ass.
Though his feet are over-sized, and his elbows & lower arms are shaped funny, it surprisingly works and he keeps all the articulation of any other modern Transformers figure. The only thing that doesn’t really work out for the better is the light piping, which is dimmed a bit due to contrasting colors. Visor, okay. Light piping, okay. But not when they’re built separately of different colors! 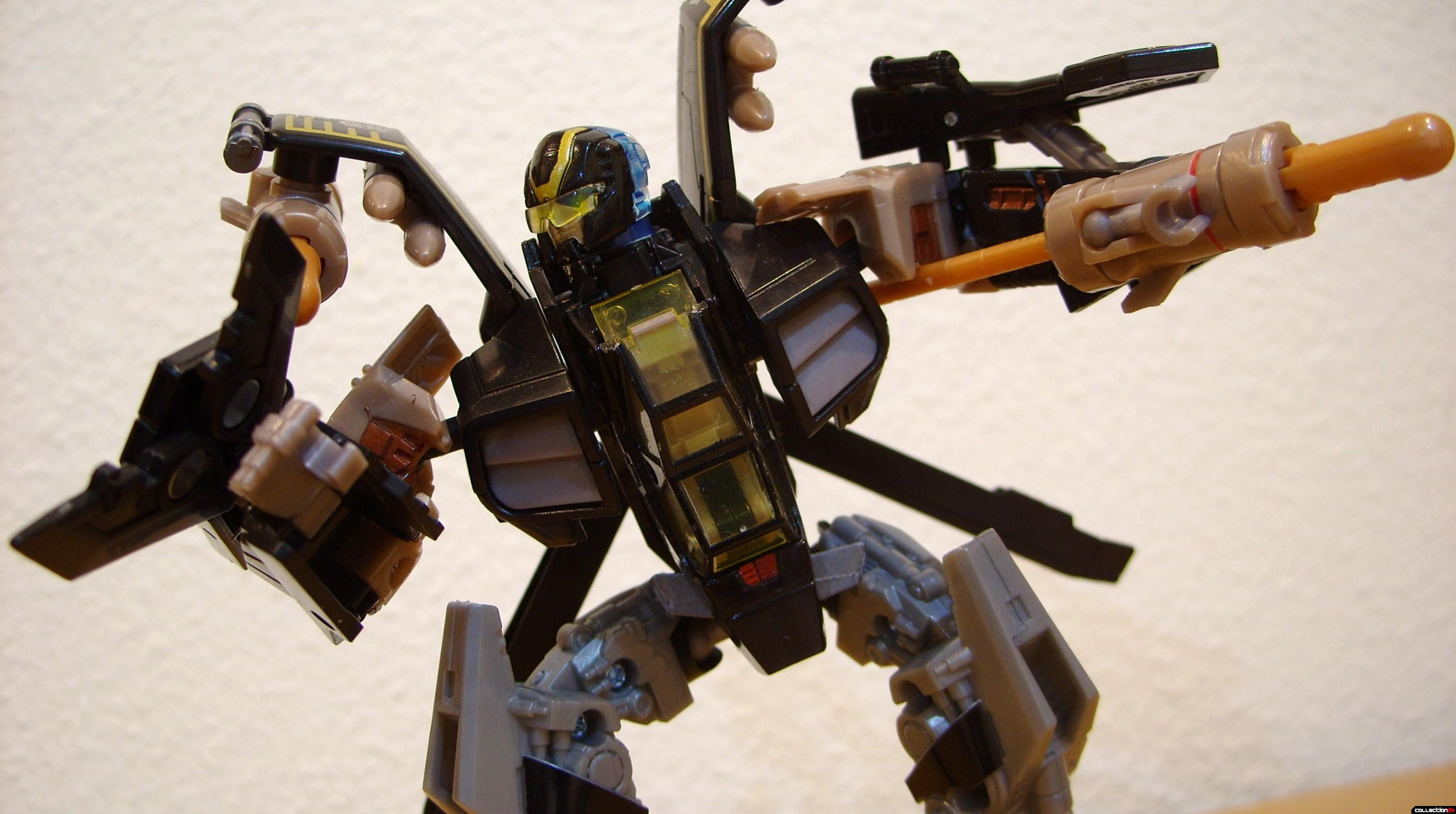 If he wasn’t a motorcycle in another multi-verse, I’d have called this guy Prowl, as he is not a bit thin-build and ninja-like with his arm scissors. And he also almost-perfectly matches in coloring. There are some bumps in his transformation, but Deluxe-class Autobot Tomahawk still puts on a show in his completed modes, and yet retains that old-school Transformers feel. Recommended!

2 comments posted
I love this mold, but I'm

I love this mold, but I'm hoping they're going to repaint or maybe even retool it into a G1 Whirl homage.