Let’s be honest- Ironhide was only thrown into the show as a cameo, and to promote an eventual repaint of Autobot medic Ratchet later on down the line. As such, he isn’t developed much beyond the two episodes he’s in…

Ironhide is one of those bots who always knew what he wanted to be- a warrior. And there are many in the Autobot Elite Guard who would envy him his special ability- a morphing impenetrable shell that can withstand all but the most-intense attacks! This makes him an ideal trooper on the front lines. But behind his brash confidence and lop-sided smirk, Ironhide is also loyal to his friends and smart.

In his native Cybertronian form, Ironhide is a multi-tracked off-road truck. 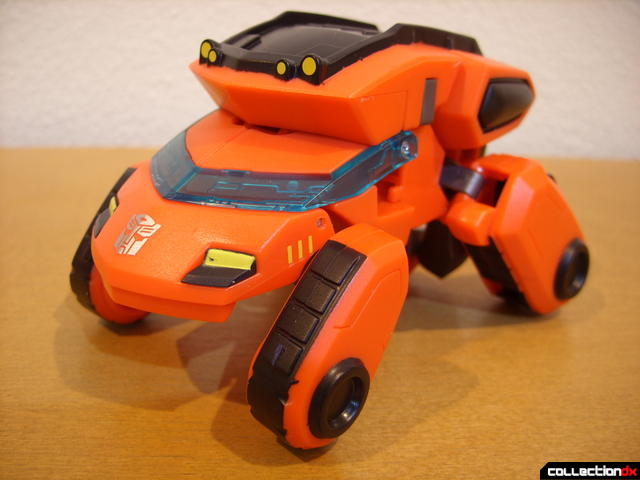 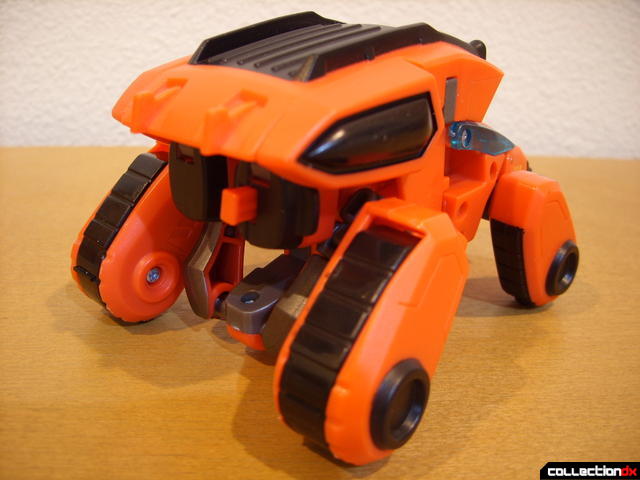 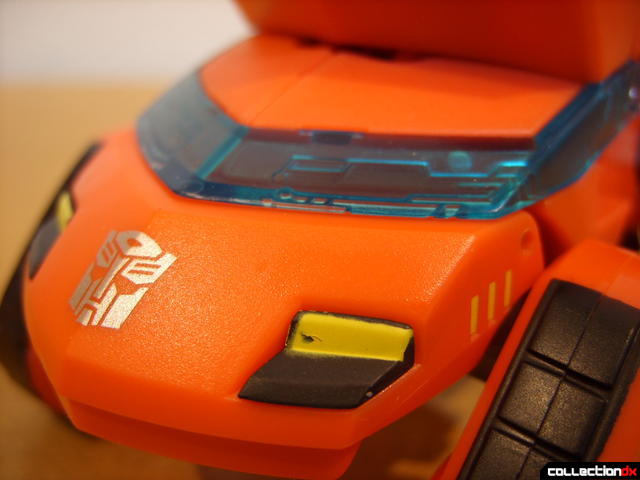 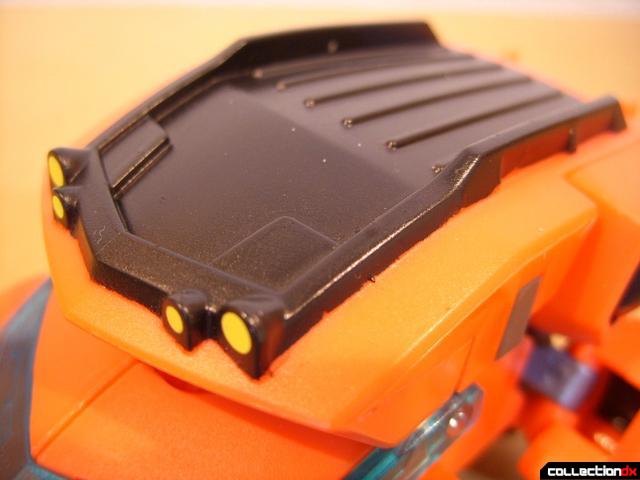 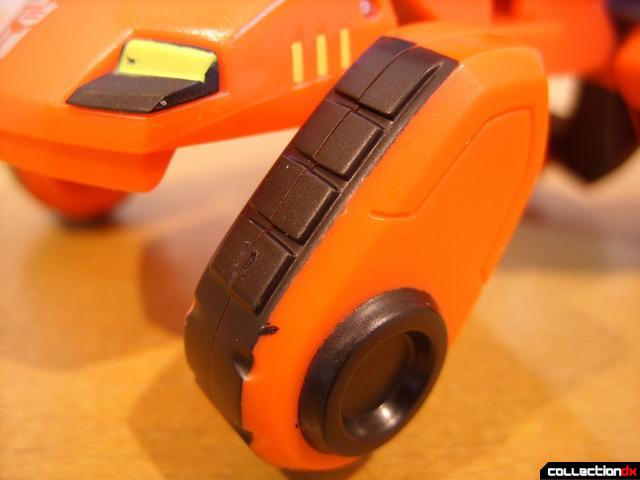 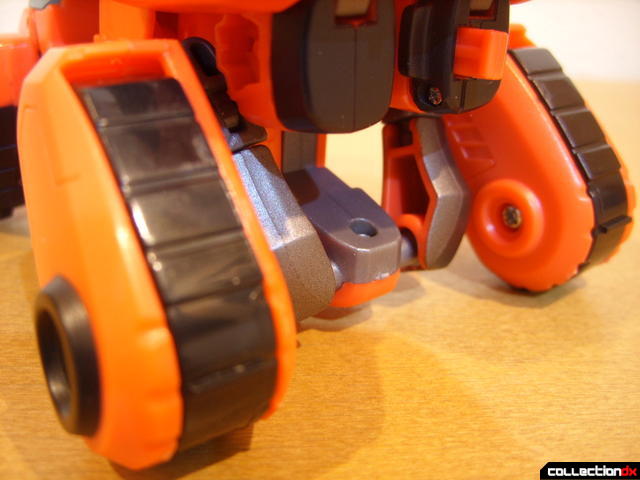 Ironhide’s weapons- a pair of detachable hammer hands- can be clipped onto the back of his vehicle mode since they are useless in this form. 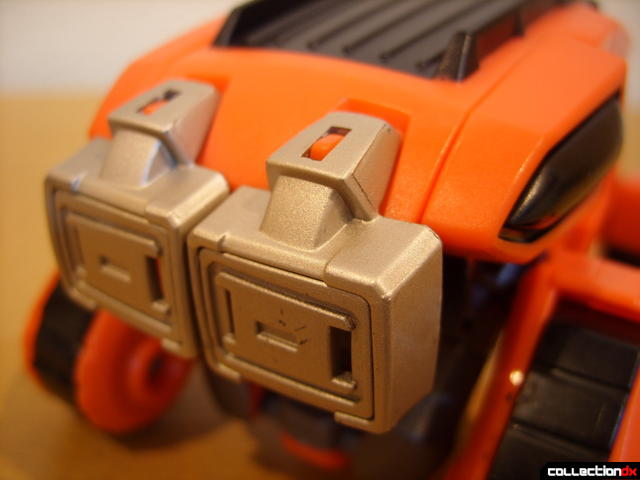 Poseability is all-around excellent. The only joint lacking is in the waist, but that’s okay! 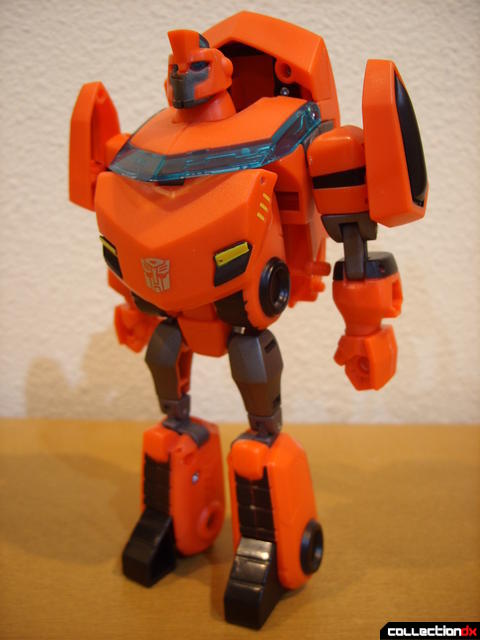 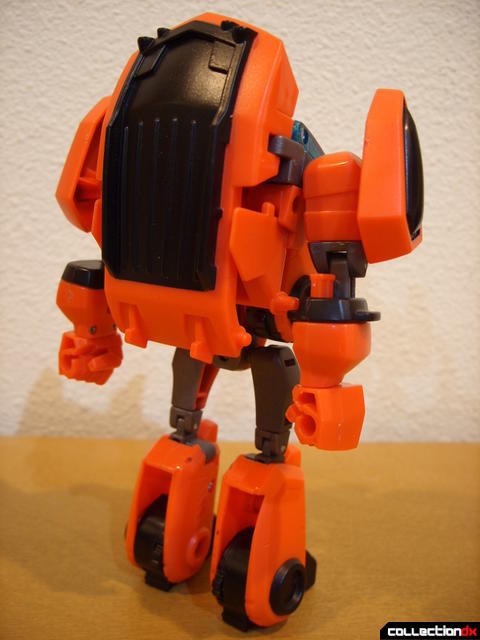 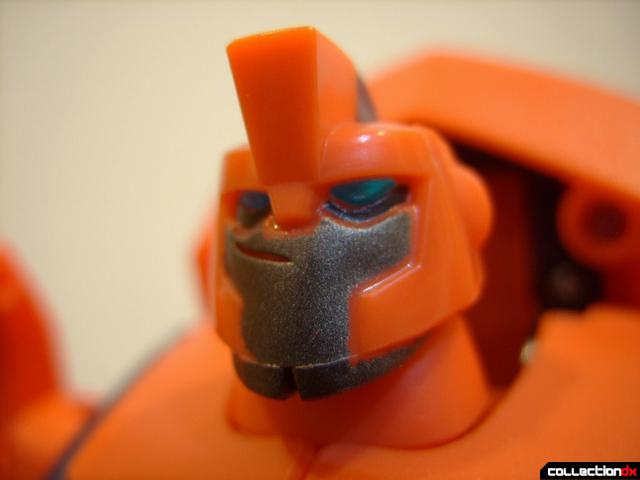 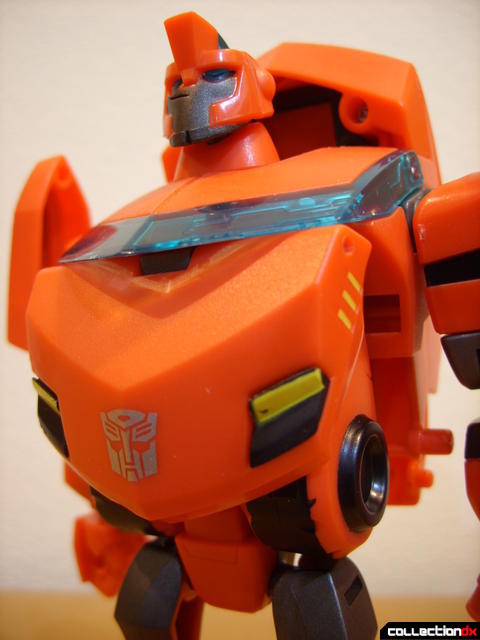 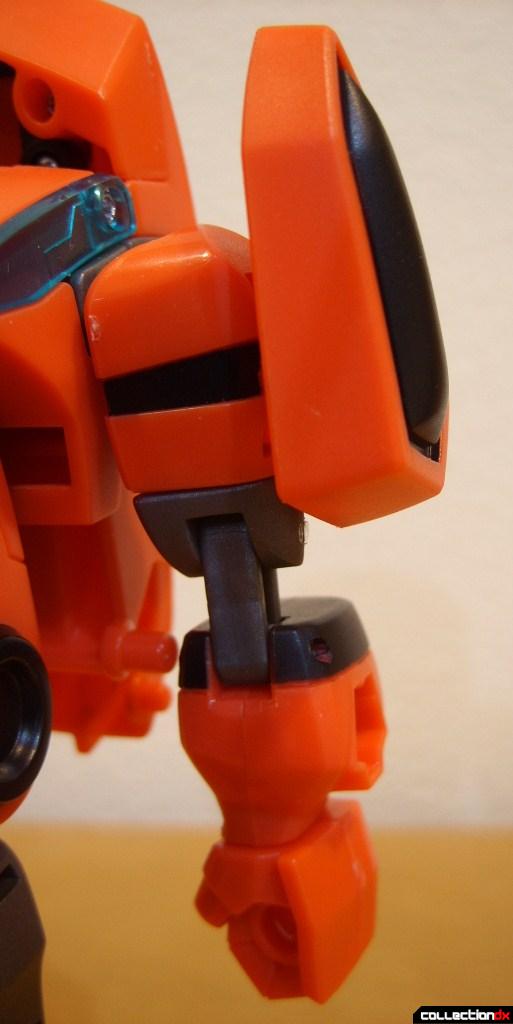 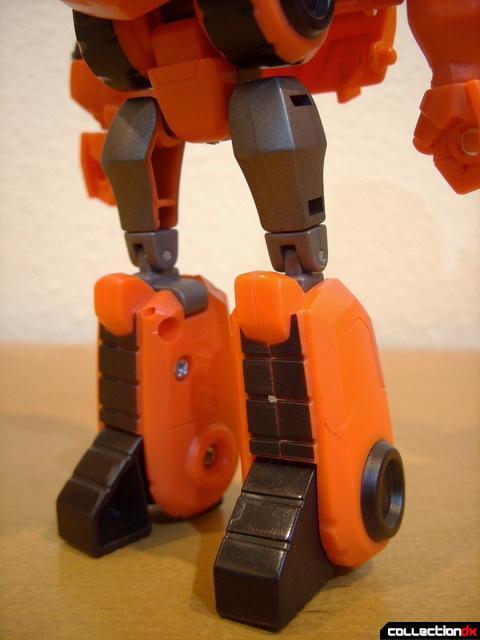 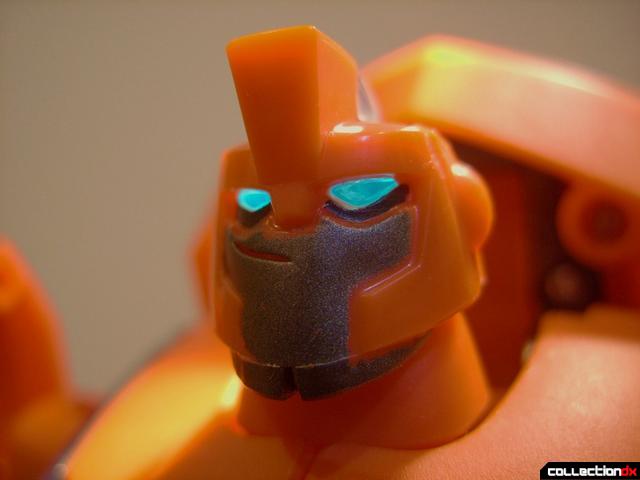 Because his armor-morphing ability would never be possible (only another repaint could accomplish his silver sheen), the only way this toy can represent it is through the hammer hands which clip onto his real fists. 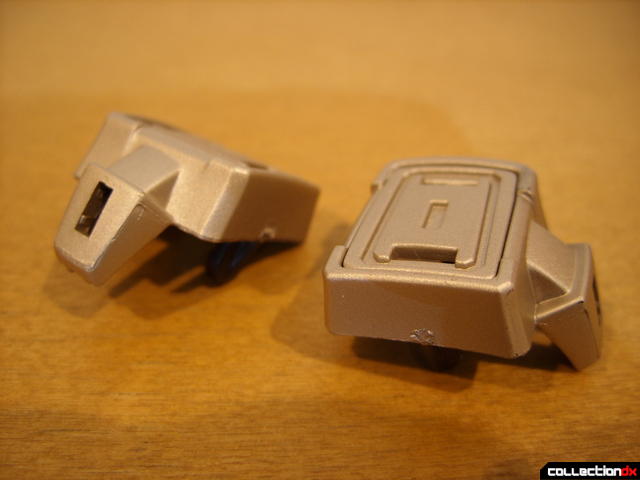 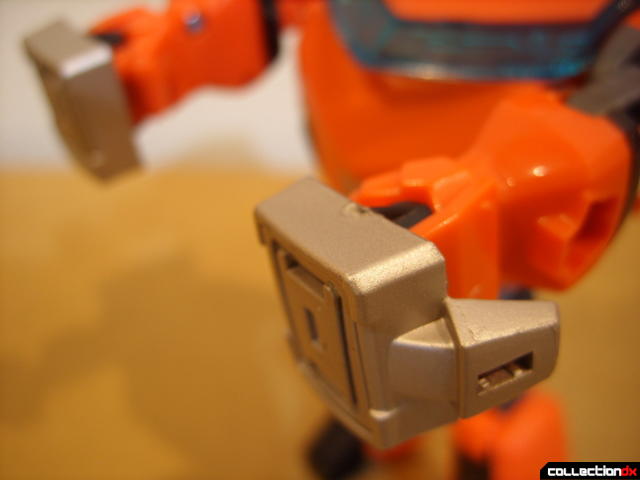 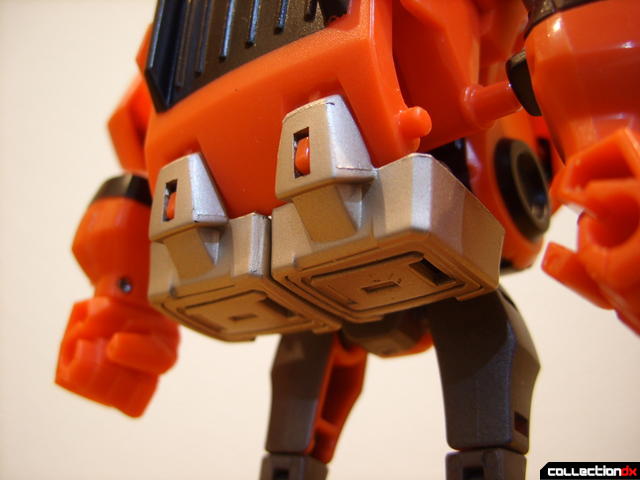 Behind his right elbow is a peg that, when pressed, will activate a punching action with his right fist! 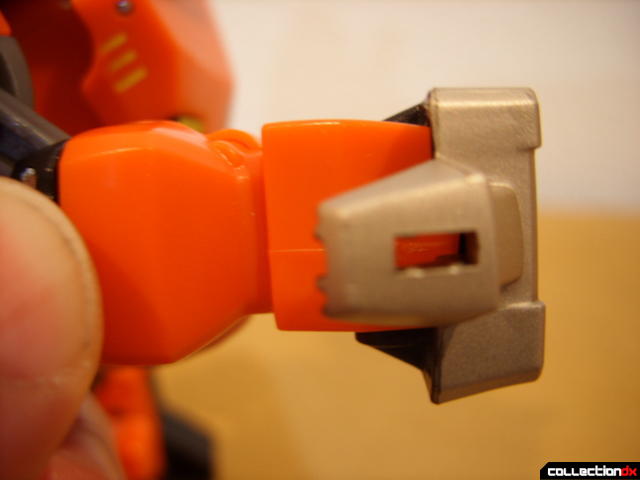 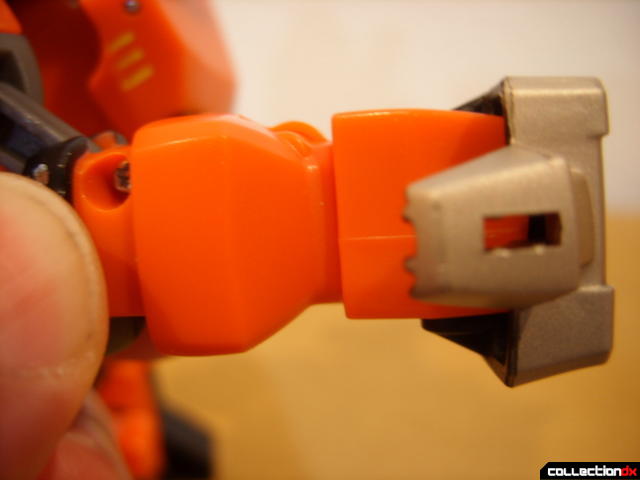 The toys of Ironhide and Ratchet have been intertwined since they made their debut on TV over 25 years ago in “The Transformers” (1984-86). They were both transformed from a generic van into headless robots (literally) with small gun platforms they could stand on. The variations from the different series- and later movies- meant they were no longer repaints of each other. But, for “Transformers Animated”, though the characters never meet face-to-face, it was a deliberate decision to make this toy a repaint of Ratchet’s own Cybertronian form as one of countless tributes & nods to the past that the series made. 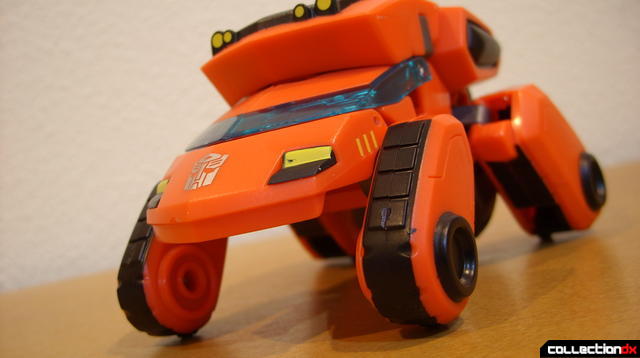 In “Animated”, Ratchet is an old crotchety war horse who has become pained by what he witnessed millions of years in the past but whom Optimus Prime can depend on for his wisdom; whereas Ironhide is a young, fresh Elite Guard recruit with a robotic Mohawk, color-changing armor, and a Han Solo-inspired grin. While animated with the same bodies, Ironhide has a broader torso and stronger legs than Ratchet when he was younger. This change in proportions, however, could not be carried over into the toys, so other than colors and decorations, the only difference between the two is their heads. (Even the torn armor representing Ratchet’s ripped-out EMP medical tool on his left forearm was carried over here, though without explanation.) 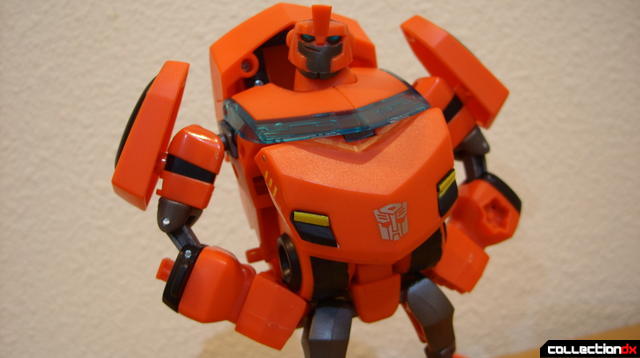 Because this is a repaint of Deluxe-class Autobot Ratchet (Cybertron Mode) who came out first, I don’t feel obligated to share as much here because someone else can do that when they review the former. I will simply say I found it to be a very clean & fun toy, I thought it was a bummer that so much of the robot mode's parts were exposed underneath (the chassis is raised up, so you can't miss it unfortunately), and the only problem I had with it was clipping on those hammer hands (which is a total pain in the ass).
And I say that because when I was in the store, I saw both toys available in good quantity right next to each other, but only had enough for one of them at the time. After about two minutes debate, I replaced Ratchet back on the hook. It wasn’t because I dislike him as a character (on the contrary, he was one of my favorites in the series), but I just… didn’t like the toy. It was personal taste- I wasn’t that rushed, I knew this toy was coming out soon, I had both in my hands at the same time. But when push came to shove, I had to put the other back. And, the next time I see Ratchet, I probably won’t get him. Not because one is enough, but just because that’s how my brain responded. Besides, Deluxe-class Autobot Ironhide (Cybertron Mode) had the better of the two character quotes on his box: “Yee-haw!”. 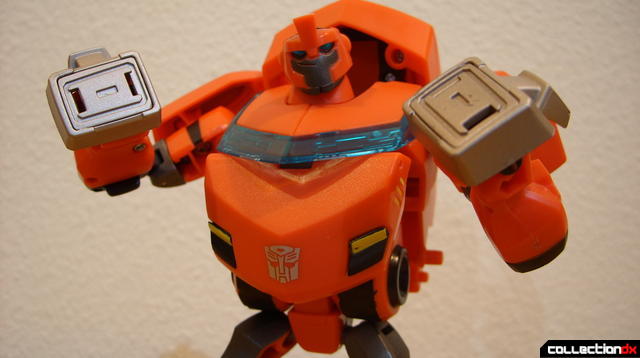 He's the last one in the Animated line, in America at least. I'll miss this series.

I was apprehensive before I purchased this guy because I hate repaints. Repaints are either sloppy or a hot mess. But this one pleasantly proved me wrong.

Ironhide, hands down, is better suited to the Cybertronian mode than Ratchet. The bulk simply suits the demands of the character, even those hand difibrillators which are now brass knuckles. Also loving the amount of articulation the figure has. He's one of the best tv-to-toy translations in the animated line.

I could totally go for an Animated Omega Supreme and Perceptor.