In Episode 18, “Inner Spirit”, the Machine Empire’s Main Drain robot attacks, and the Rangers summon the Zeo Megazord. But when King Mondo falsely surrenders, Main Drain takes advantage of the distraction and heavily damages the Zeo Megazord! With days needed to repair the Zeo Zords, Billy and Zordon inform Tommy (Zeo Ranger 5 - Red) that they anticipated a time when the Megazord might not be immediately available for combat. Using his previous experience in dealing with the Aquitian Rangers and their telepathically-controlled Battle Borgs, Billy incorporated a similar type of mind-control system into an experimental Zord, called the Red Battlezord. While struggling to pilot the new Zord, Tommy suddenly realizes that he needs to treat it not as a thing to be controlled, but as an extension of himself. When he figures this out, the Red Battlezord begins to respond properly and it soon destroys Main Drain with fast punches & rapid firepower. 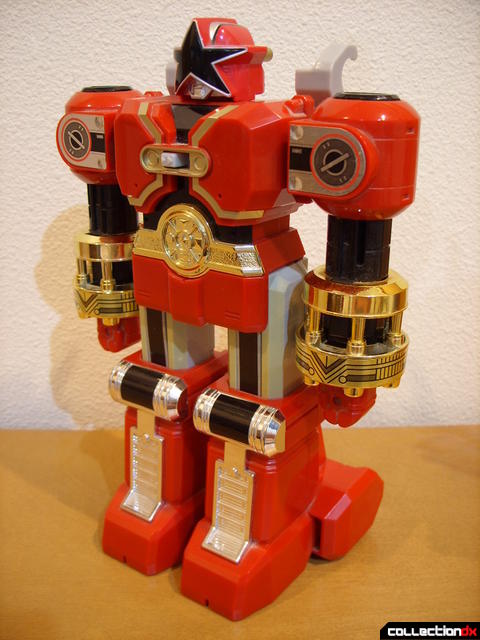 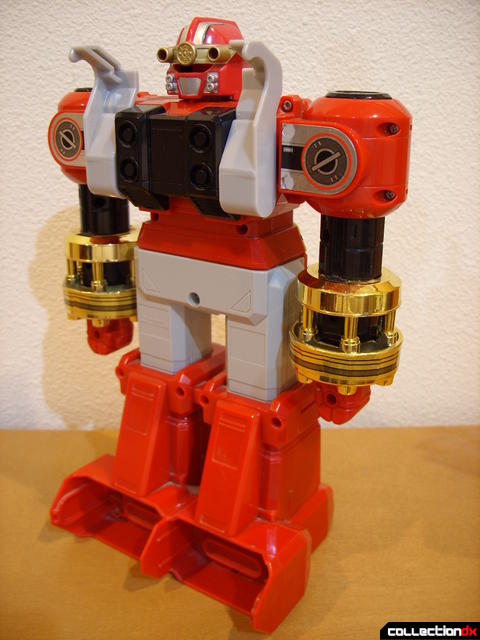 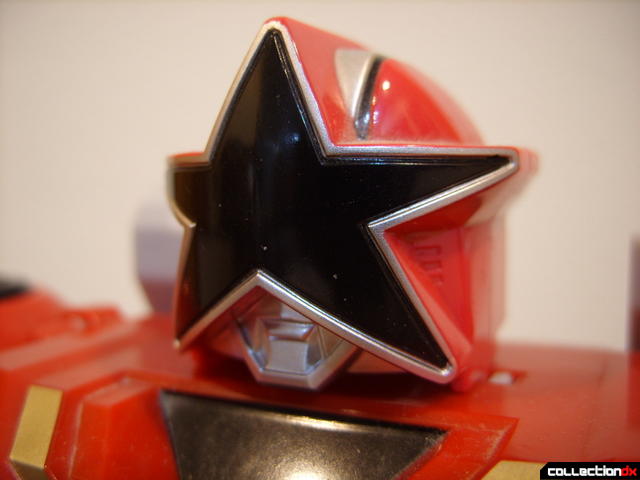 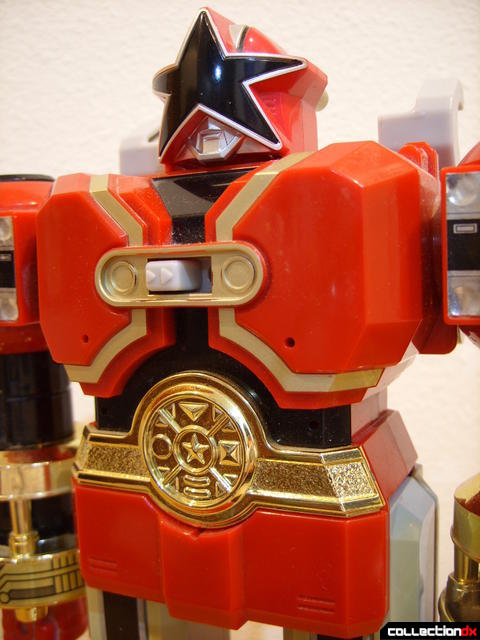 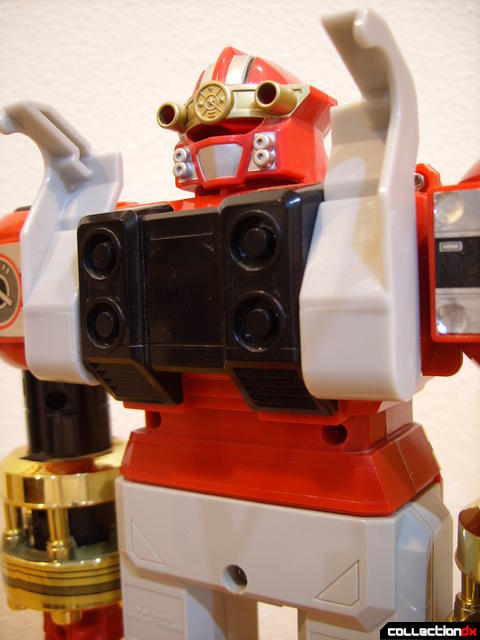 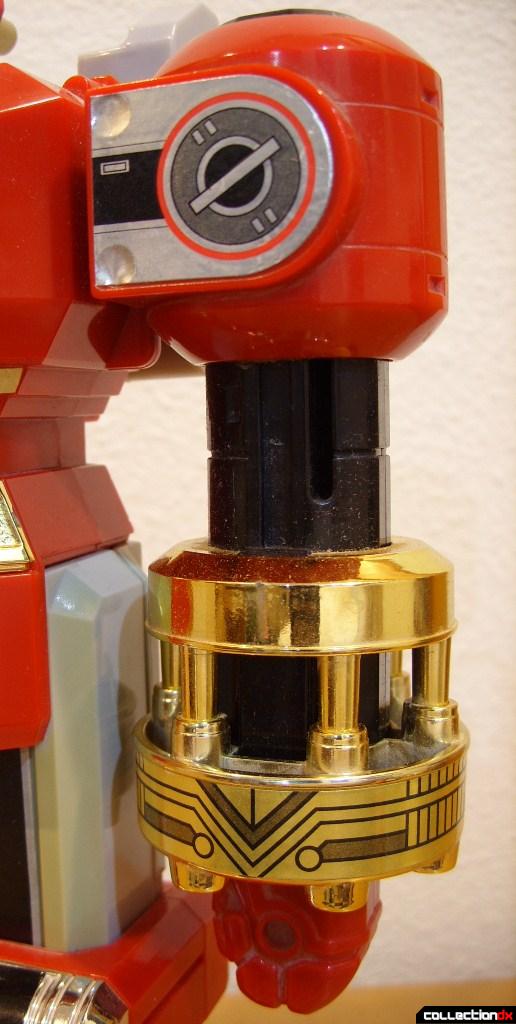 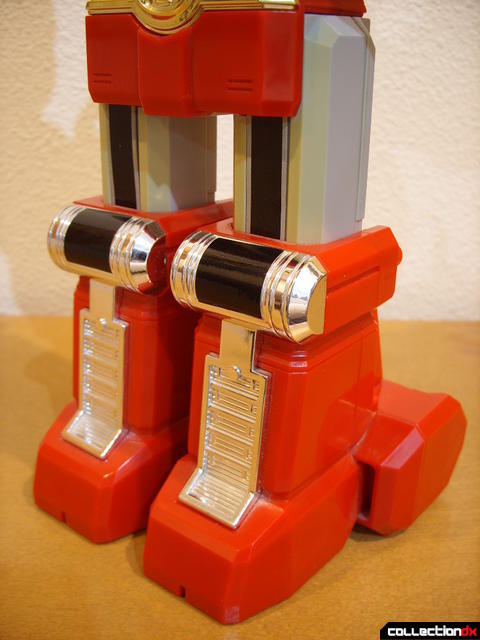 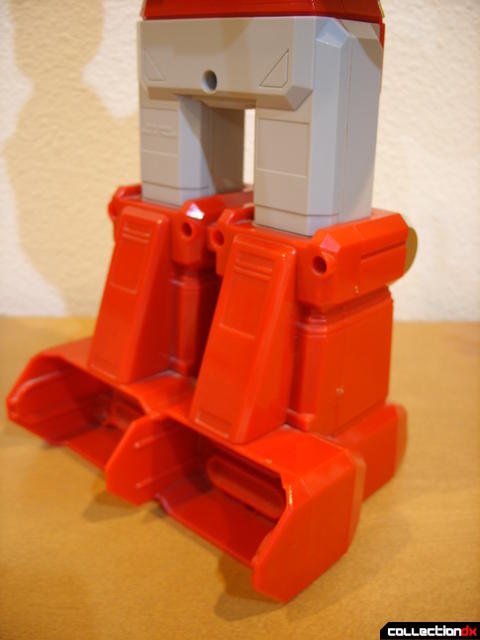 The only movement the toy can make is in the ratcheting shoulders. However, the Red Battlezord has an electronic motorized punching action. The arms will piston back-&-forth at one of two speeds depending on what position the switch on the chest is set to. 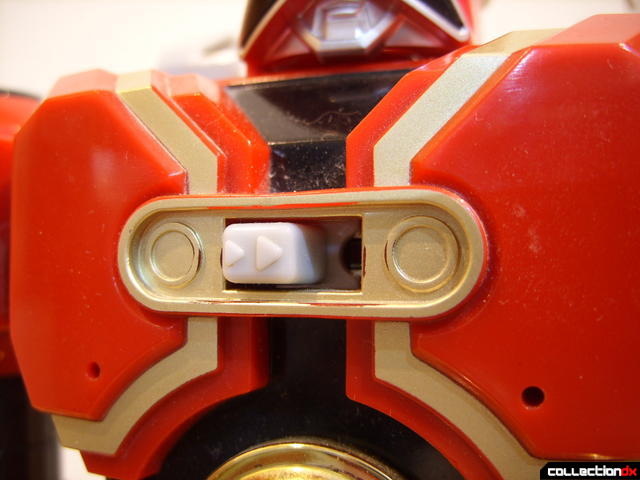 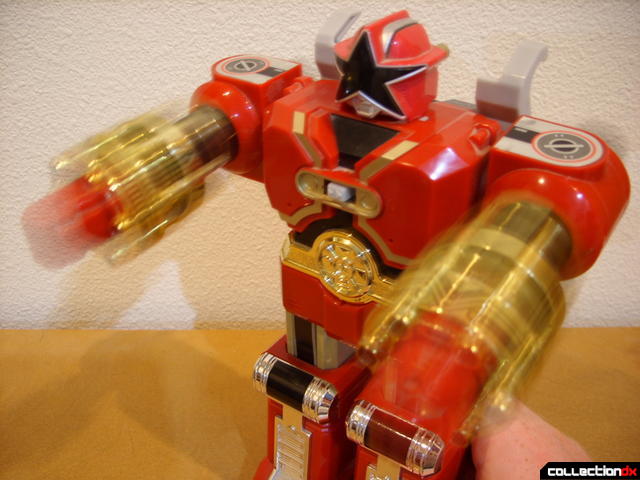 Be aware that, while there is a failsafe to prevent the motor from locking-up in case the arms are blocked from moving, it is not really designed to allow for different punching patterns regardless of which speed it is set to. Therefore, it is a risk of internal damage to forcibly alter the frequency at which the arms punch. (It’s been so long since I got this toy that I can’t remember if they punched together or separately…)

For those of you wondering what the differences are between the Deluxe Red Battlezord from “Power Rangers Zeo” (1996), and its original Japanese counterpart- the DX Red Puncher from “Chouriki Sentai OhRanger” (1995)- the answer is simple: There are no differences. They are exactly the same. (Way to go, Bandai America!)

In Episode 20, “Found and Lost”, after a vision quest in the previous episode, Tommy discovers that he has an estranged brother, David Trueheart (actor Jason David Frank’s real brother, BTW), living with a Native American tribe! The Machine Empire acts quickly on this revelation and kidnaps David, planning to hold him for ransom. With repairs on the Zeo Megazord finally finished, it and the Red Battlezord are summoned to deal with the transforming giant robot Mace Face. When the initial battle goes poorly, Billy and Zordon tell the Rangers that a new combination between the Zeo Megazord and Red Battlezord is possible, but Tommy must be focused in order to accomplish this. So, as he searches for his brother, the other Rangers defend the city from Mace Face. The story concludes in Episode 21, “Brother, Can You Spare An Arrowhead?” Frustrated at the situation, Tommy takes the Red Battlezord to the city, hoping to destroy Mace Face along with the other Rangers. With no other options, the Rangers combine their Zords into the Zeo Mega-Battlezord, and destroy Mace Face with one volley from its pumping shoulder cannons. (The rest of Episode 21 deals with the resolution of recovering Tommy’s brother, and learning the power of the magic arrowhead. The first appearance of the Zeo Mega-Battlezord occurs early on, but it appears again at the end of the same episode to deal with a different monster.) 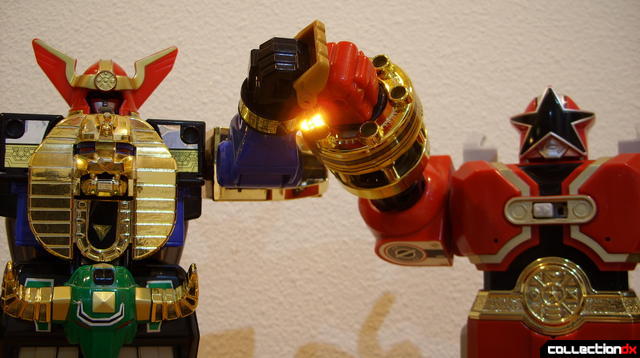 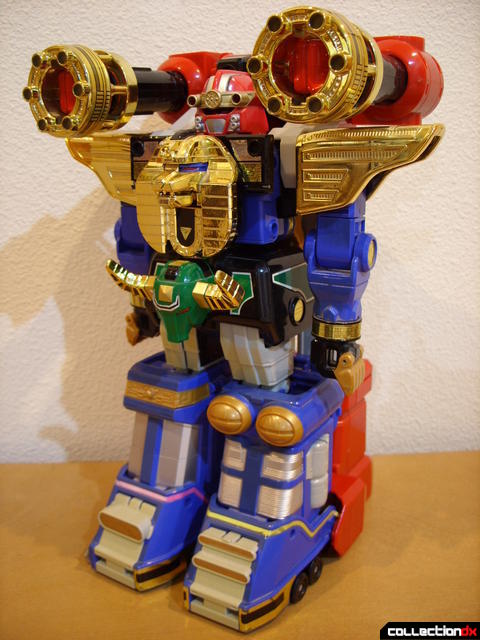 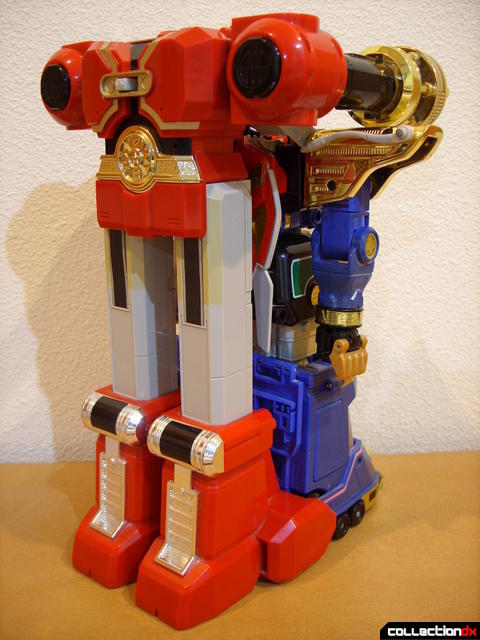 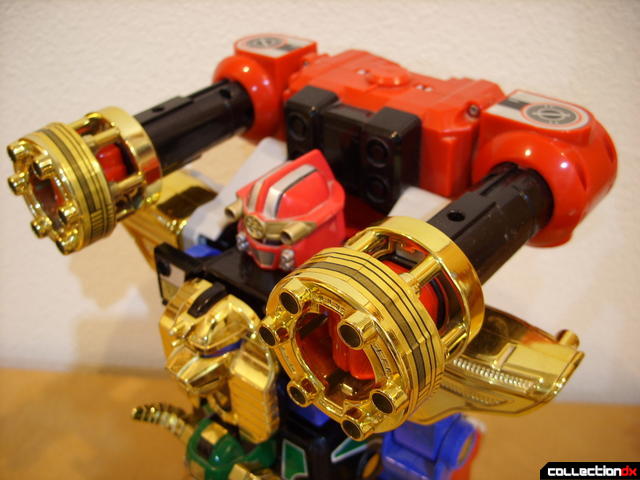 Though not labeled as such, the Red Battlezord’s head rotates around to reveal another Zeo Battle Helmet for the combination. 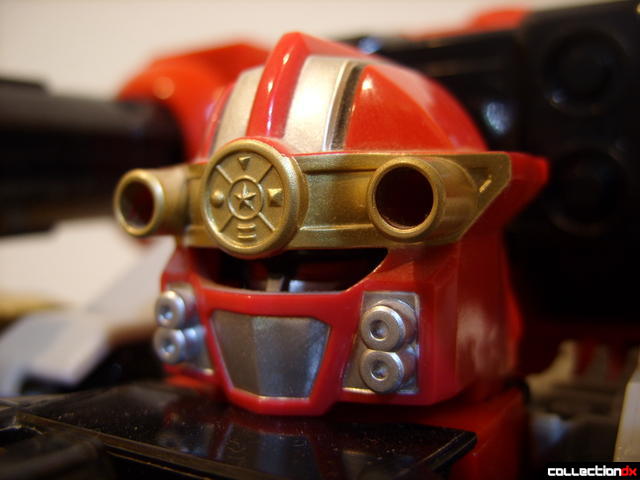 The Red Battlezord’s arms- which now form large over-the-shoulder cannons- can still piston back-&-forth when the motor is activated. The Zeo Megazord’s arms are unaffected by the combination, and retain all of their articulation & range of motion. 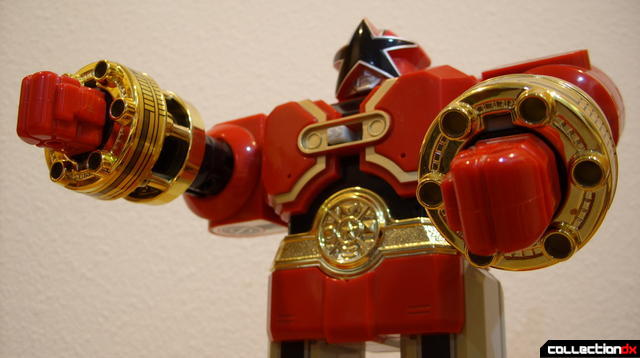 The only thing about this toy I [still] miss is not having poseable legs. While they are designed to telescope in order to make the combo, and the twin “C”-size batteries are stored in the thighs, I always imagined some ratcheting hip, knee, & ankle articulation could have been added, even if they weren’t as flexible as the Zeo Megazord’s arms. This was a nice motorized feature to have after a two-year absence, and made for a nice action feature. But because it wasn’t flexible in allowing you to change the timing of the punches (a limit of toy design during the mid-1990s?), the gears protest quite loudly, and when you turned it off you had to force them in order to get the arms to align with each other again! By itself, the Deluxe Red Battlezord has not much to offer but blocky boxing goodness, and despite not having an alternate mode to transform into on its own, it’s still a solid if simple toy. 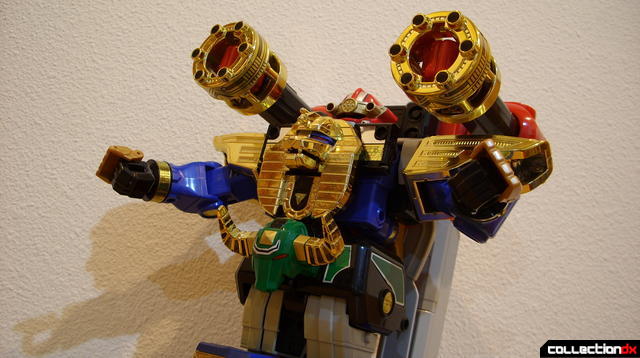 While the Red Battlezord can operate acceptably on its own, the simple stand-alone design means its obligations are focused towards the combo with the Zeo Megazord. It becomes little more than a giant backpack with chunky support legs attached to the Zeo Megazord’s own legs for stability. But, this should not be a problem. I mean, since when were giant cannons over a robot’s shoulders not sexy in some fashion? And it has cannons built into the new helmet! While the use of the Zeo Megazord Saber becomes defeated by said shoulder cannons, the articulation of those arms remains intact for some awesome 'Get ready, ‘cause I’m about to blow some $#!+ up!' poses. Nothing goes wrong with the Zeo Mega-Battlezord, it only gets better.

This combo and MagiRanger are the only two megazords I own, and I love these two guys! Certainly the first toys on the shelf I'll let my son play with when he's old enough. Great review!

I was waiting to see if you'd cover this guy. Power Rangers are a mystery to most older collectors, yet they really are the modern "quality" toy robot. Ah, but for space considerations.... Selling off my Megazords increasingly feels like shooting myself in the foot. Then again, sticking solely with the toys of your youth can be torture sometimes :)

Unlike most collectors who frequent this site, with the exception of jumbos and interactive vehicles [what else did I forget to mention?], Super Sentai mecha just take up a lot more shelf space proportionately. BUT, that's what I like about 'em- they're BIG and you don't have to squint to see most of the details. 12"-average height is just right for a kid-sized robot toy. It's the collectors who get it up the ass when they go for the same physical size for iconic robos like Gundam, Macross, etc. (EX: a Yamato ver-2 1/60 Super Valkyrie stands under 11" and costs over $130 because it specifically targets collectors and is most-definitely NOT a toy.)

that thing is just awesome. by the time i get around to ohranger with my sentai collection, it's probably going to be real hard to find red puncher.
i will be displaying it separately. i think it looks good enough on it's own

Truthfully, though getting the original Japanese version(s) would make my collection shift more towards Super Sentai releases and make it more 'valid', I'm not going to pursue them because the PR versions are so close/identical. Only in the spirit of having the originals would I pursue them.

To be fair, though, there are several of my PR Zords I would eventually like to replace with their Super Sentai counterparts, such as the Shogun Megazord (the Muteki Shougun is the Holy Grail for PR collectors), Ninja Falconzord, Serpentera, and Red Dragon Thunderzord.
------------------------------
CollectionDX Staff