Transformers Animated continues to be a fantastic toy line with great designs, too bad the show is being supposedly canceled. 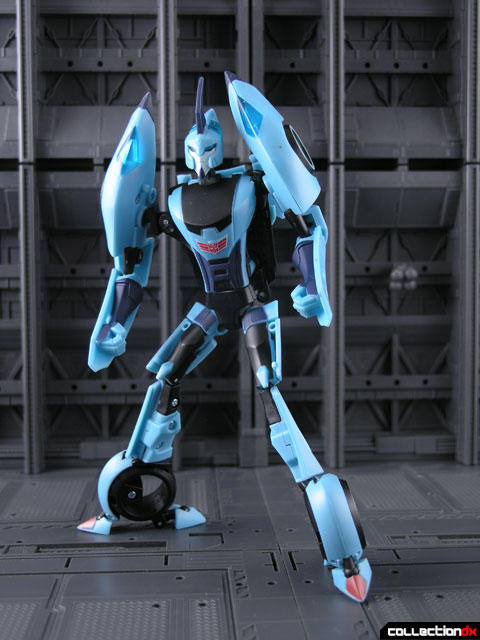 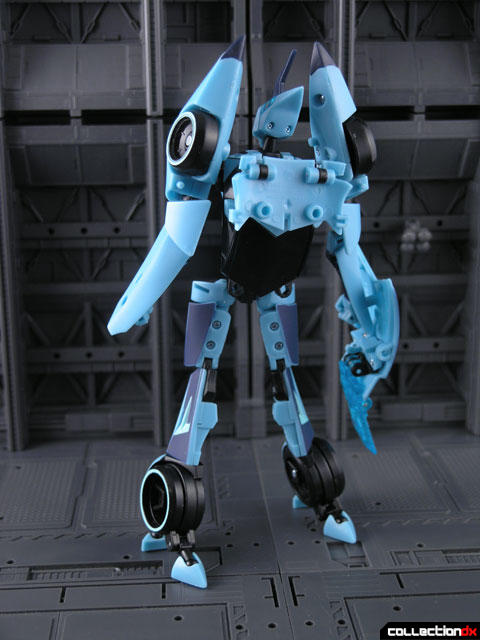 I didn't care for the show at all, but usually if there's no show, there's no toy line. But with Hasbro, who knows. 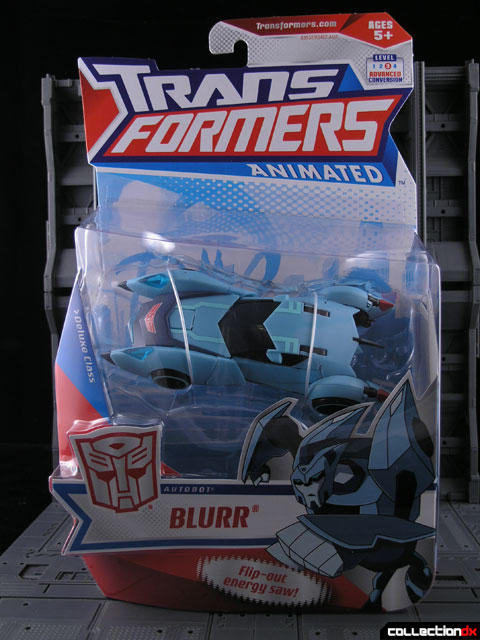 The original G1 Blurr first appeared in the original transformers movie. He's been represented in several different toy lines since then, but next to the original, this is my favorite. All it needs is metal. 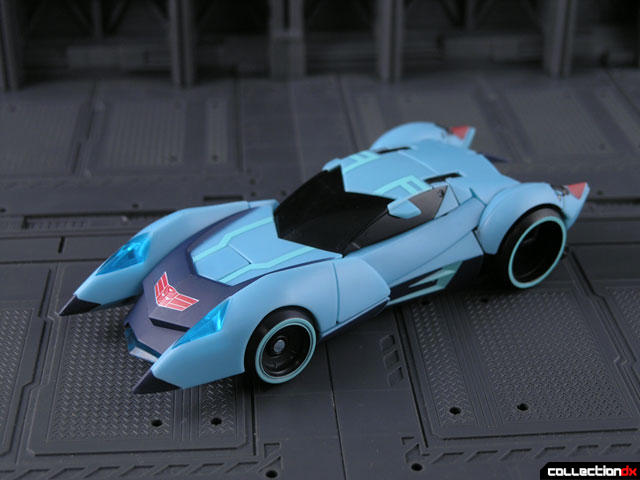 In car mode, Blurr is a futuristic race car. His lines are sleek, reminiscent of the Mach 5 from Speed Racer. 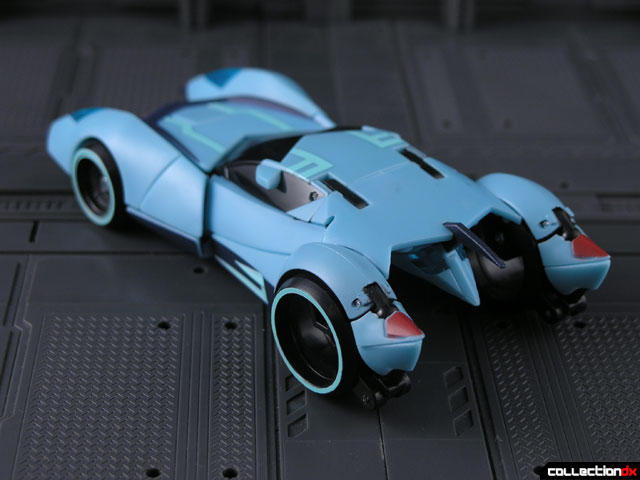 The color scheme evokes a very Tron like aesthetic, which I am a sucker for. 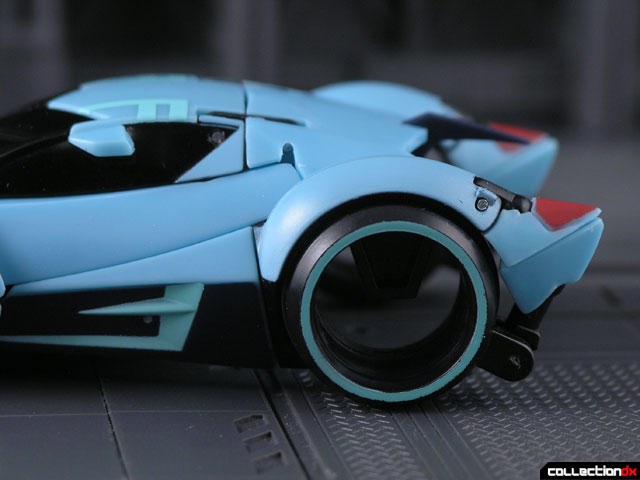 The vehicle rolls freely and the only gimmick is an Energon saw that pops out from under the front of the vehicle. 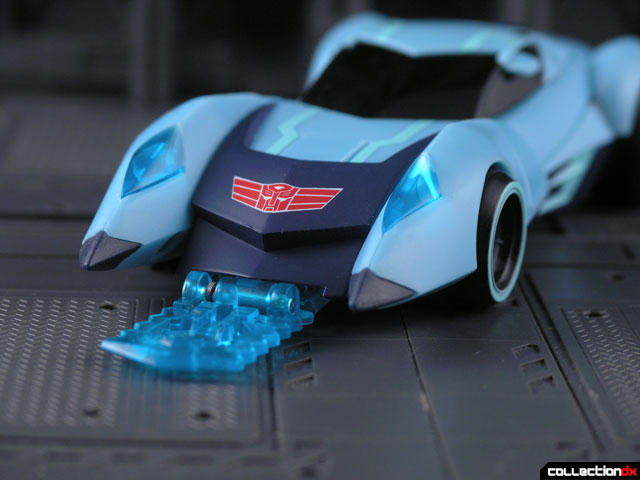 The tips on the front of the vehicle are rubber, a nice choice, likely for safety reasons. 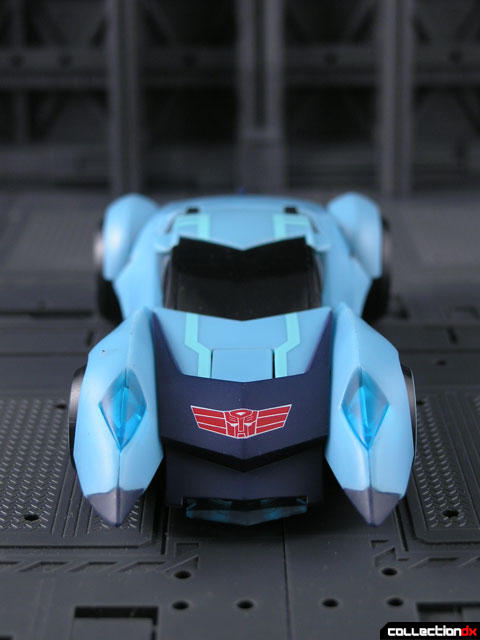 Transformation to vehicle mode is pretty straightforward and what you get when you are done is a fantastic looking, super articulated robot form. The Transformers design team have really found their groove with these Animated figures. 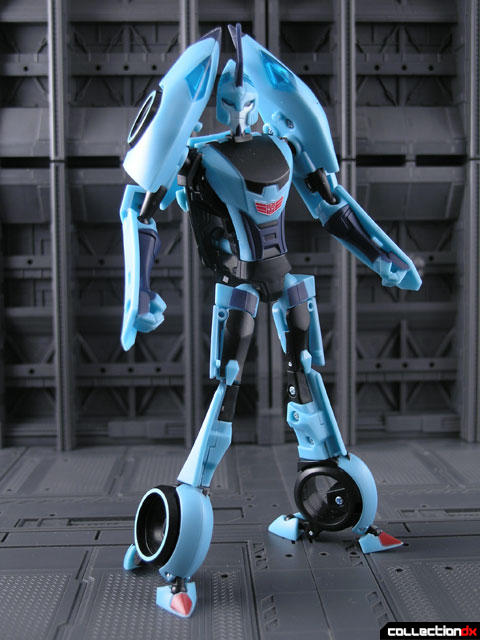 Blurr stands over 7 inches all and is pretty well articulated, especially below the waist. The large pointy shoulders hinder some of the movement of the arms, but it's not too bad. Despite the spindly appearance, Blurr has tight joints that makes posing a breeze. 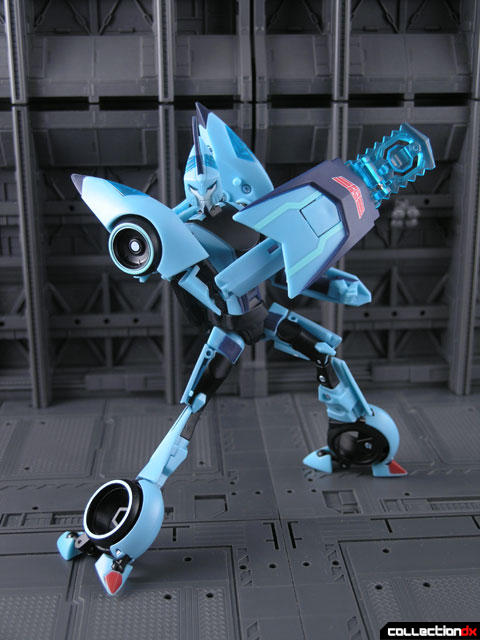 The Energon saw that was stashed under the hood is now a shield in robot mode - affixed by a peg to the arm. 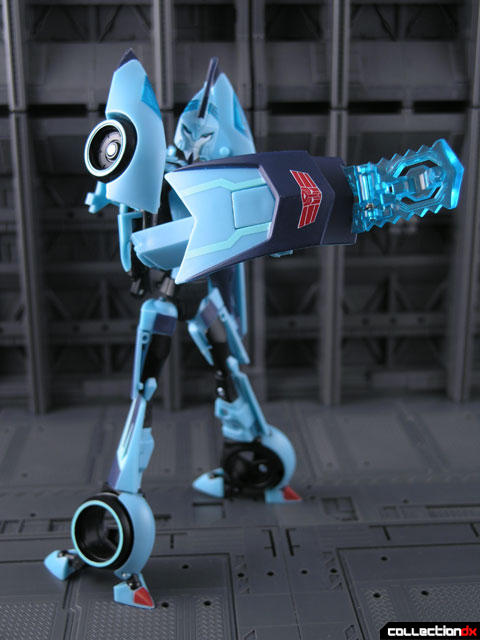 The head has a gladiator-style look to it, and features the standard light-pipe effect. 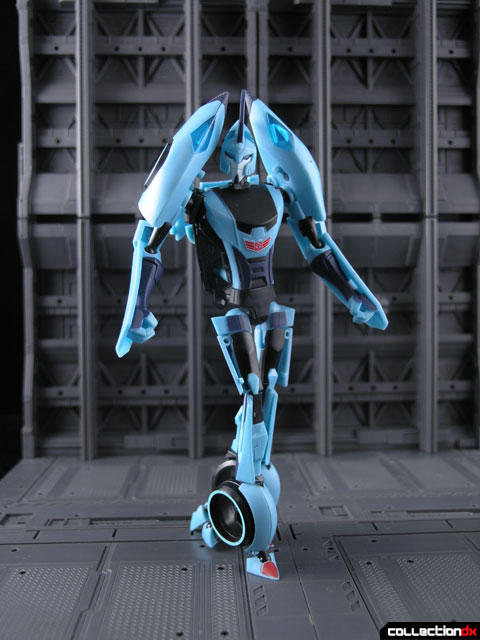 This guy is really fantastic, even if you are not a fan of the show. Grab one while you can. 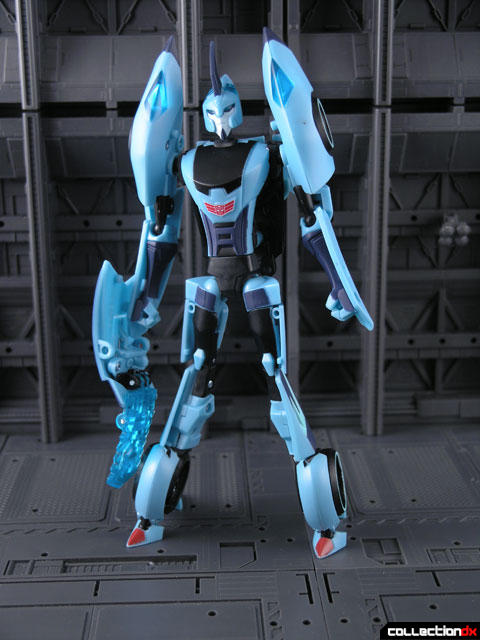 I somehow can't make myself buy Animated recently, switching more to G1 and Universe 2.0. While this guy has very interesting transformation sequence, there's something bothering me in his robot mode proportions...I guess Cybertron Mode Prime is still my weakest spot in the Animated line.

Great review, I envy you the black background combined with Action Base, really great effect :)

I don't own any of animated either too many toys already in the collection especially Encore & G1 reissues. The animated are nice but metal would make them ideal. Do they even add diecast metal to any Transformer toys anymore?
About Transformer Animated they usually only run most American cartoon series for roughly 3yrs... have no idea why this is?

The comment about "TRON" is dead-on; this is a very "eighties Syd Mead sci-fi" look.

That's really a cool looking car design! I would just buy it for just the car alone.

Cool toy. Looks great in both modes and seems to have some charisma to it. I haven't seen the show, but I can imagine that thing walking right off the screen. And the big Gunbuster style shoulders work pretty well here.

I really like the overall design of Blurr, giving it a new spin yet still paying respect to its G1 roots. Really tempted to pick this one up but I don't want to deviate from my Voltes V and Superman collection ;)

"I really like the overall design of Blurr, giving it a new spin yet still paying respect to its G1 roots. Really tempted to pick this one up but I don't want to deviate from my Voltes V and Superman collection ;)"

I don't think picking up Blurr won't taint your collection that much. Besides, the asethetic toy design look to Blurr qualifies as a superhero robot if you think about it.

This is the best toy line from Hasbro in ages! The figures are very show actuate, but scale wise they're all over the place. Then again that's always been the way with TFs. As for the show, I grew up watching the G1 cartoon and the Animated show has lots of fan nodes back to the original, it's certainly not the worst thing on TV.

This and the Universe Classics lines are awesome (just take a look at Cyclonus). Personally I don't like the Live Action Movie figures, couldn't say what it is, but they just don't work for me. And from what I've read, don't know how true, but Animated + Universe Classics toys are being stopped for the Live Action Movie after the success of the original movie toy line.

When I first saw the alt mode to this thing, I've been tempted to take one and re-paint it so that it resembles the Mach 5.

people have been using these for a few months as custom Batmobiles and other custom toys.

I've got two of these, they're great. even though I didn't like the show, or many of the other designs, there are a lot of good figures in this line.

Those customs are amazing-there's a few where they use Lockdown too.

great review! i love this toy, its the absolute best in the animated line in my opinion. just one minor quibble, you've got the feet backwards!