This is my favorite toy right now. I sit here and stare at it and it just seems so surreal that this exists. But here it is, real, and in my hands.

I first heard about the possibility of this a few years ago as Toynami had announced the smaller vinyl voltron. George (head of Toynami) had teased in an email to me that something BIG was in store for Toy Fair.

Sure enough, at the 2010 Toy Fair, Toynami unveiled prototypes of their Jumbo Voltron toys. They were amazing looking, but I did not want to get too excited. These things have a habit of not happening, especially something this huge.

But they did happen, and here they are. And they are here under the SHOGUN WARRIORS line. 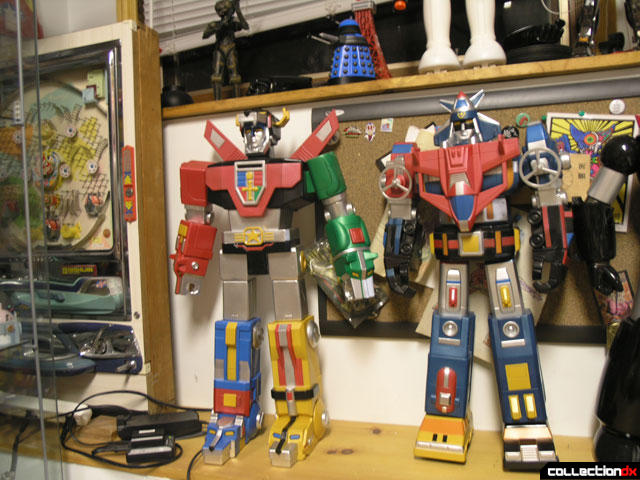 It's real. It exists. Shogun Warriors in 2011, with one of my favorite Characters – Dairugger XV. Most will know him as Voltron 1 (aka Vehicle Voltron), but since Mattel now has the rights to Voltron, this has to be marketed under its original name. 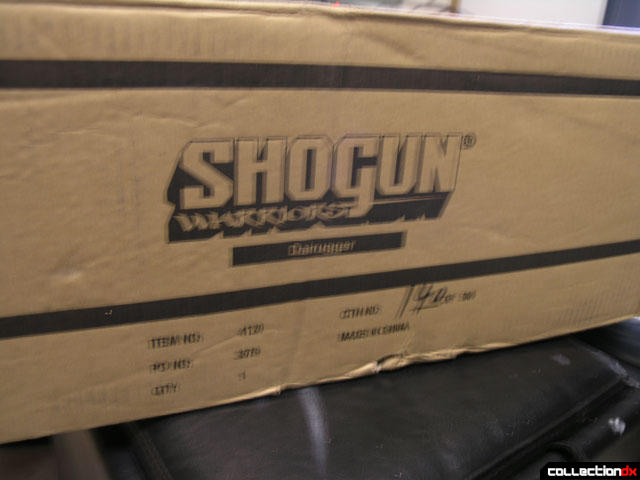 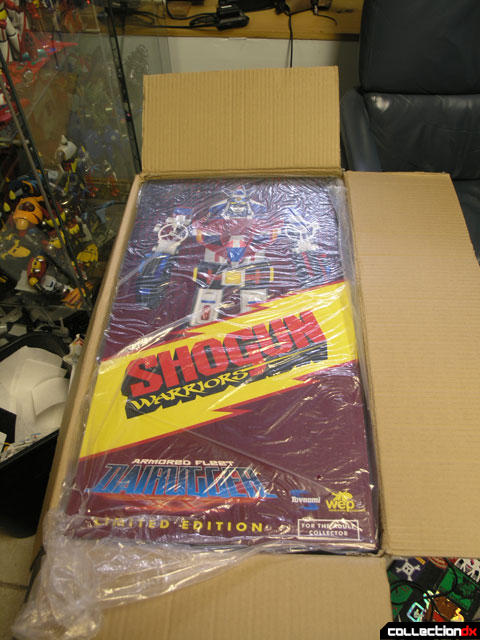 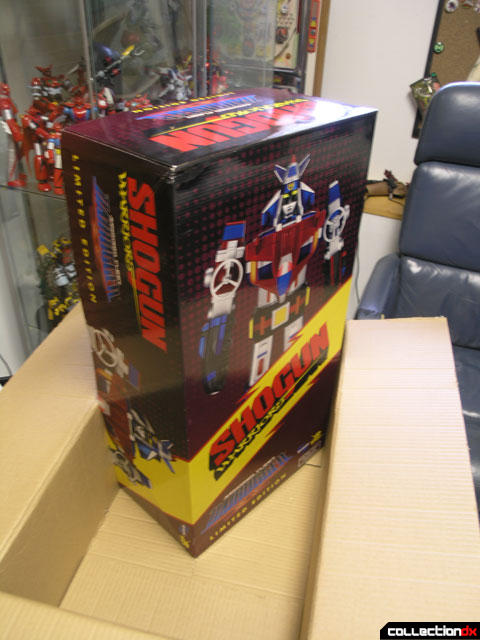 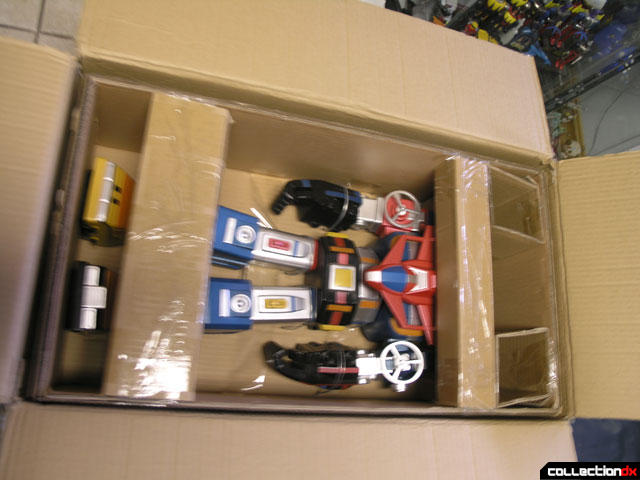 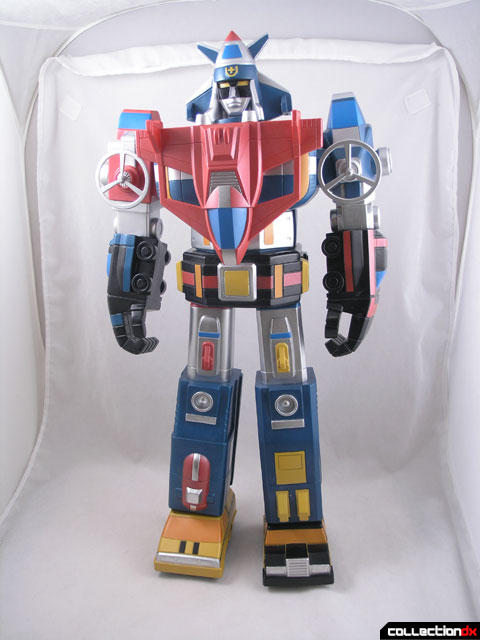 The toy is mostly made out of hard, thick vinyl. The fists do not fire. There are no “roller skate” wheels. But it is 24” inches tall and has a reasonably neutral pose, comes in a shogun warrior box, and is marketed as a Jumbo. If you collect Jumbo Machinders, you've bought things that resemble jumbos less than this. 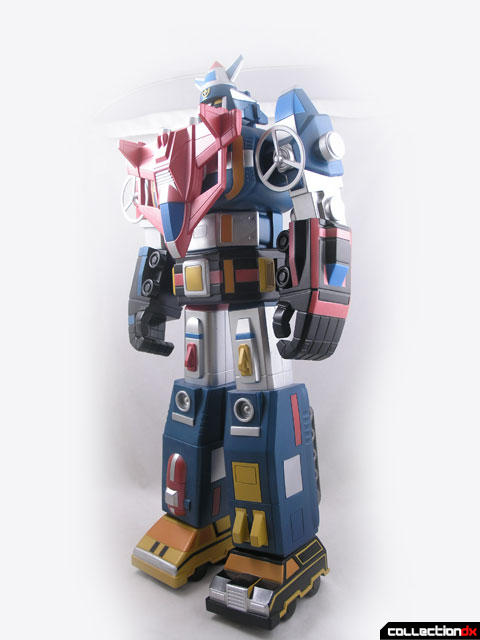 The vinyl head is solid with a few of the finer details obviously glued on. The head can rotate stiffly. 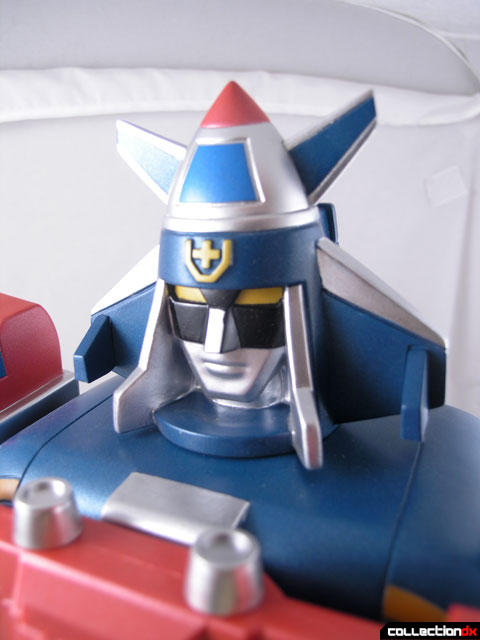 Each shoulder rotates and the propeller blades are made out of hard ABS and do not turn. There is a swivel joint at the elbows, and each hand features an open fist. The box shows the fists as solid, but they were carved out for the final piece. The hands have a wonderful bulk and firmness to them – it does not feel like vinyl even though I know it is. 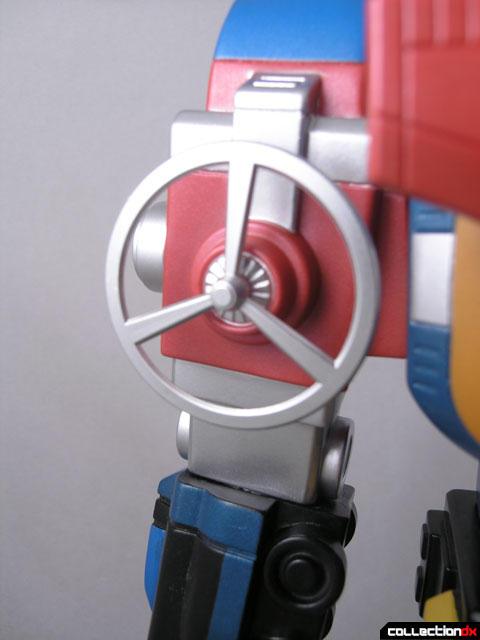 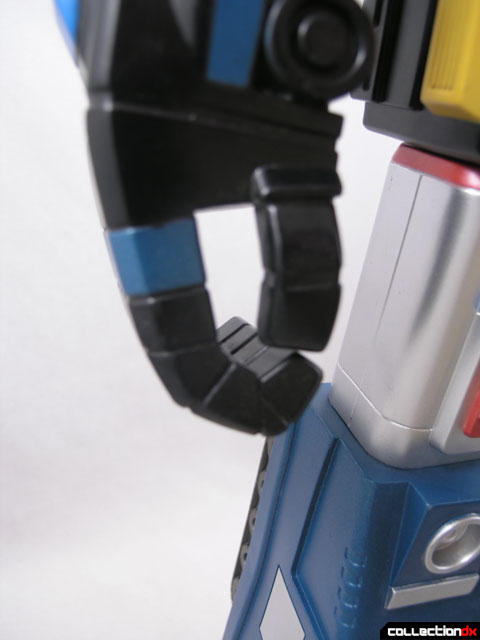 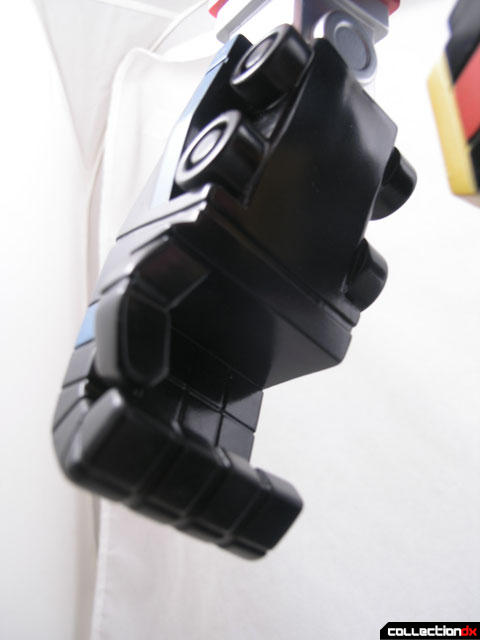 The chest ship is also made out of hard hollow ABS and is not removable. 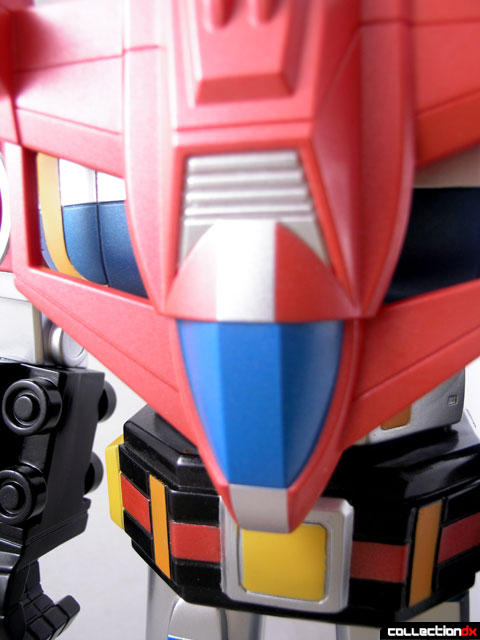 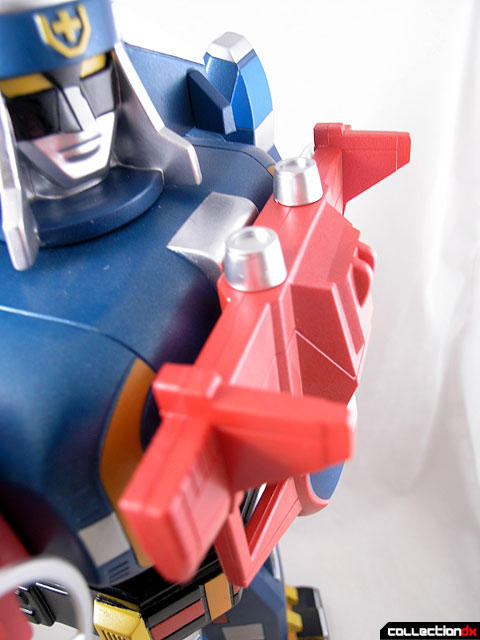 There's a waist joint between the second and third ships. 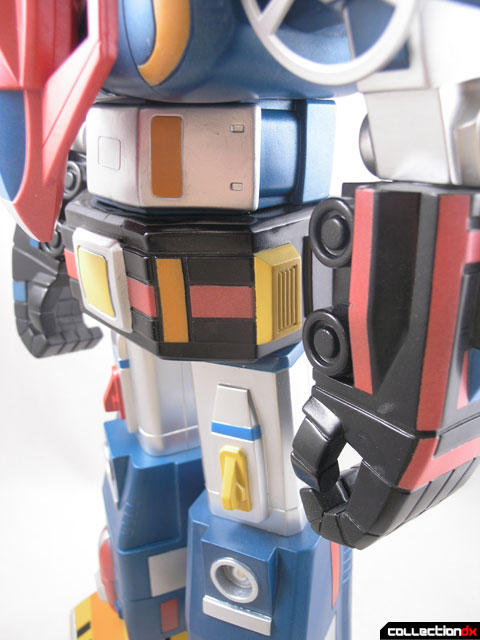 The legs swivel at the hips, then again at the feet. The wheels on the feet are solid and molded on – a missed opportunity to give this a real jumbo feel. 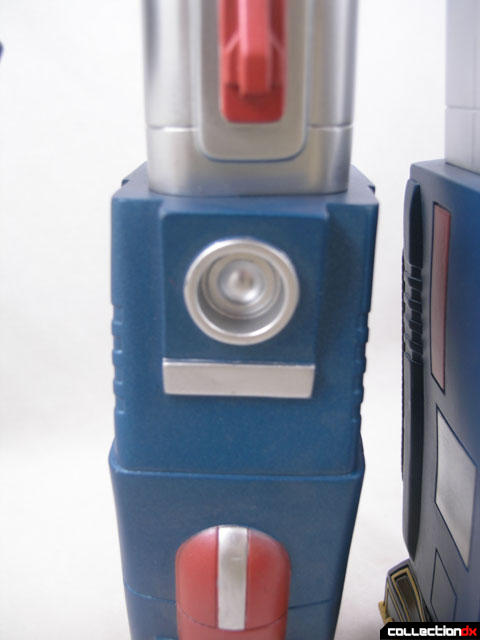 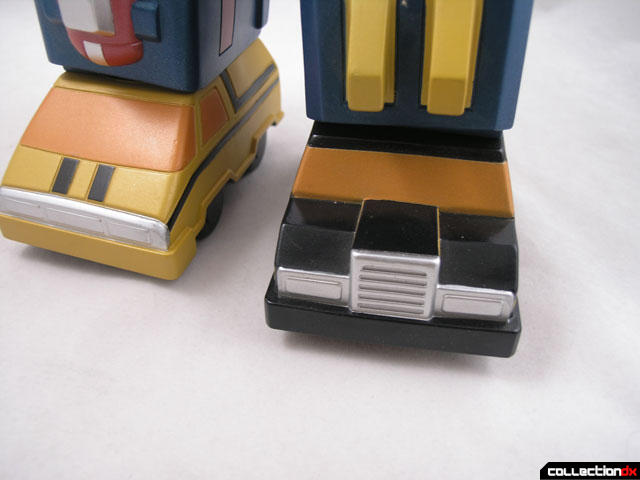 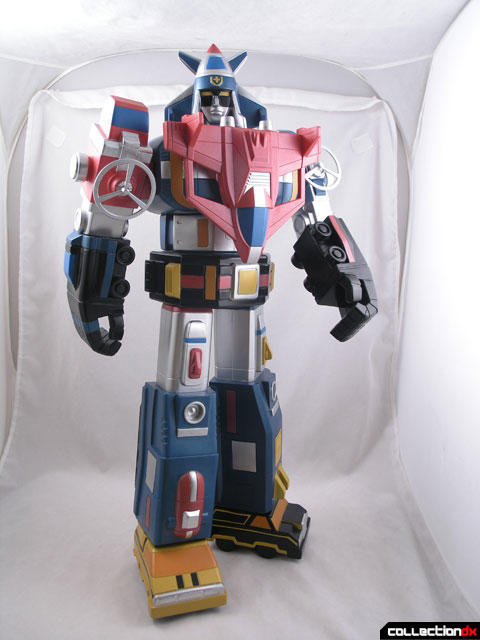 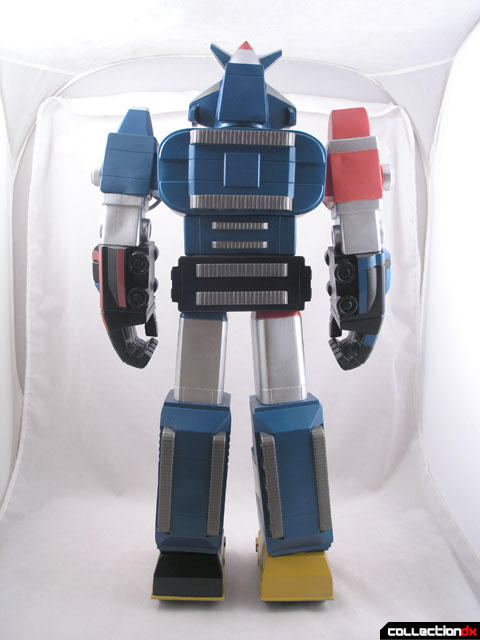 The toy is not overly detailed which also keeps with the Jumbo aesthetic. You have the essential detail, like tank treads on the back of the legs, but all of the mecha-minutae is left out. At first I thought this was just a scaled up version of the smaller vinyl, but compared to this one the small one's details seem gummy and soft. The head is better proportioned on this one and the hands are entirely different. 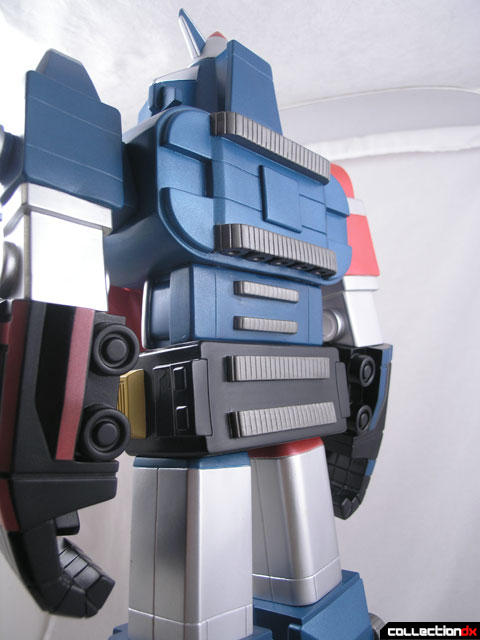 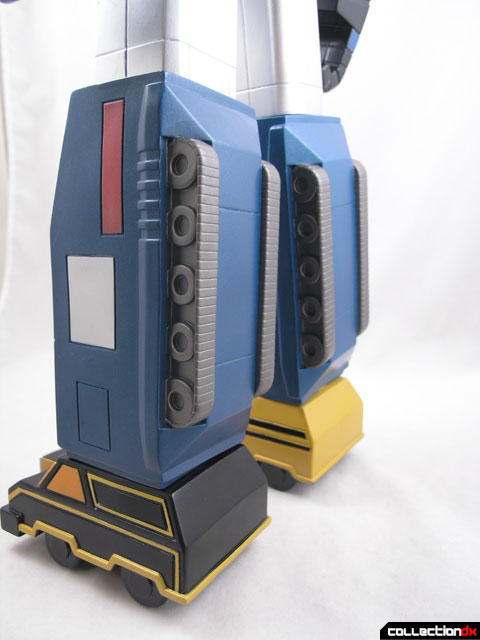 Another cool thing that I like – and maybe it's coincidence – but the toy is made out of 15 separate parts. So the Dairugger XV actually is made out of all the separate individual components. 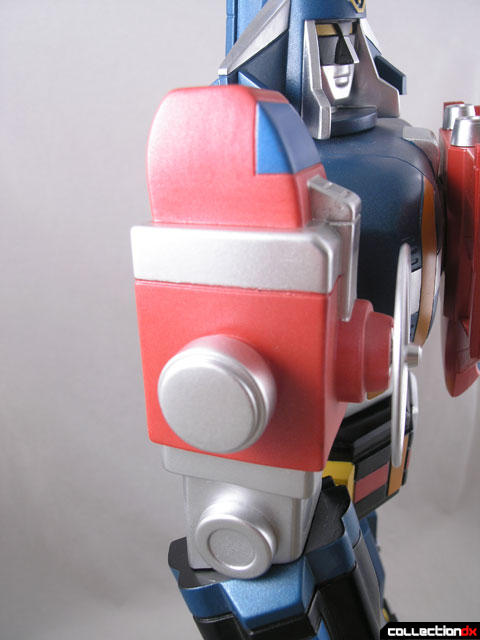 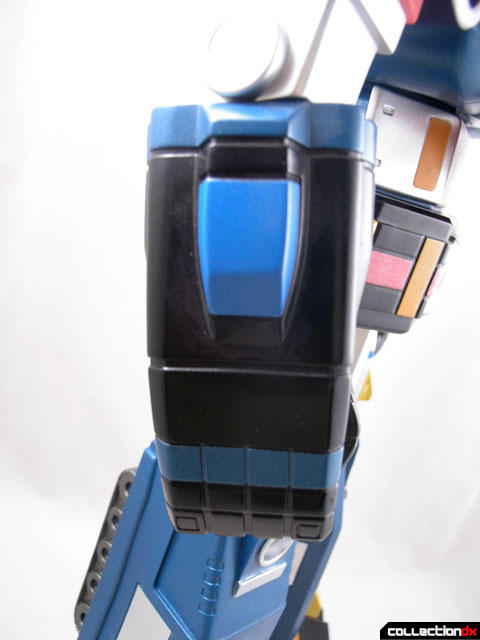 The toy is not without its flaws, but I can forgive them considering the nature of the toy. The paint is good, but not great as you can see places where it was touched up at the factory. The toy has a few imperfections in the molds and paint detail but I can overlook it considering the scale and scope of the toy. In fact the only thing I can really complain about with this is the lack of a sword. 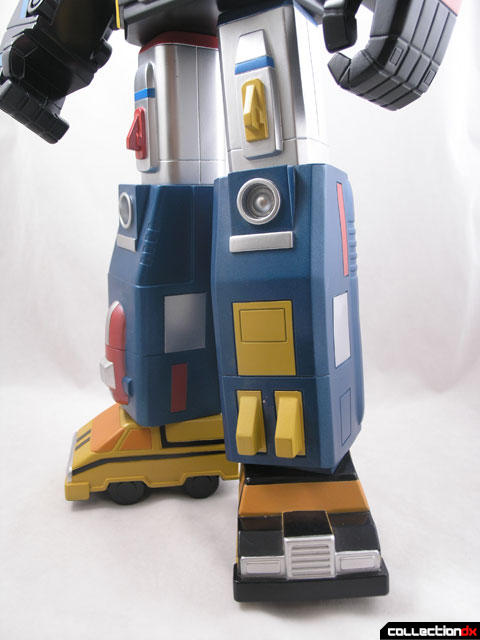 I really have to give props to Toynami for making this. Making a Lion Voltron is a given, but doing a Vehicle Voltron takes balls. This shows true passion and dedication. For me this is a collision of worlds – Voltron meets Shogun Warriors meets Jumbos, and it's here, real, in the flesh, in my house. It's a little overwhelming if you think about it too much. 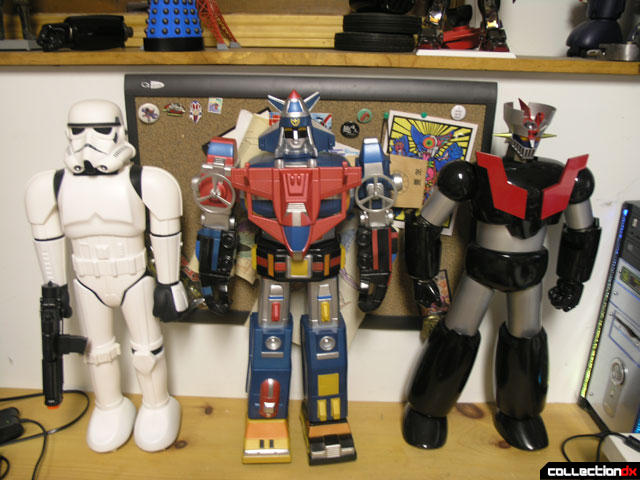 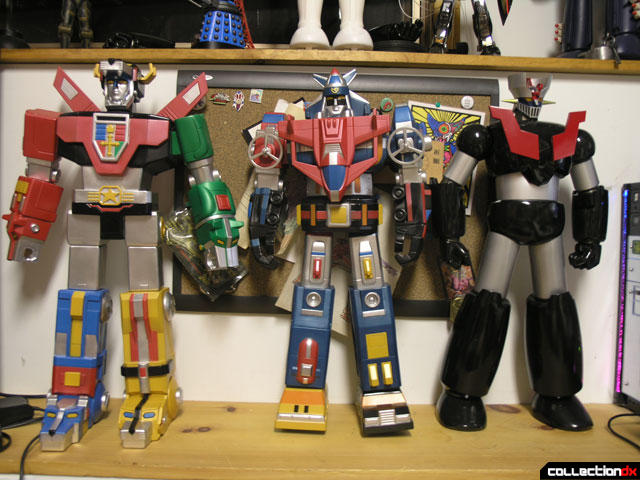 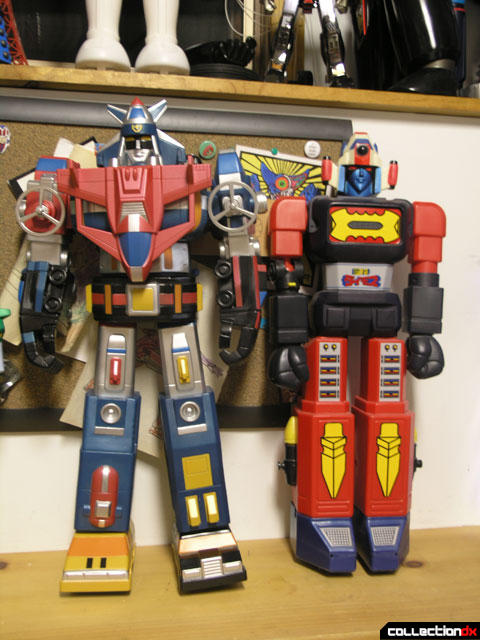 I'm glad that you finally have your dream dairugger, but I just can't get into these, despite being a Jumbo obsessive. I prefer the stylistic primitivism of the originals.

Screw the haters, this is gorgeous. Can't wait to meet it, even though I know that will leave me wanting one. I really hope these do sell well. If you were going to update the Jumbo concept, I think this is the way to go. The details and finish on this guy make it loads more interesting than, say, the Stormtrooper ;)

Nothing more than a big vinyl statue. Overpriced at that.
The box sure is alluring, but if you grew up with the playability of a REAL Shogun Warrior, then this would be a massive disappointment had I gotten one of these under the tree in '79.

Nice! I have the Golion and I am totally happy with it. The price is justified because its a low run release. I think the figure is great. I have the Shogun Stormtrooper and I can't really say one is better than the other, but if given the choice of keeping only one, I would have to say I would keep the Toynami. Mostly because Voltron is my absolute MOST favorite robot EVER. Worlds above even Daitarn 3. Unfortunately my Dairugger is sitting in a Pile of Loot waiting for my wallet to have enough to bring it home.