It's hard to believe that it's been two years since this toy was first shown at the 2008 New York Toy Fair, but the Creature is finally upon us! This toy just arrived from our good friends at Amok Time.

I'll start with the packaging. This massive toy comes in a huge box measuring 23.25" tall,13.75" wide and 8.5" deep. The front has large closeup of the Creature's face with the toys name above it, with full body pics on the side and back. 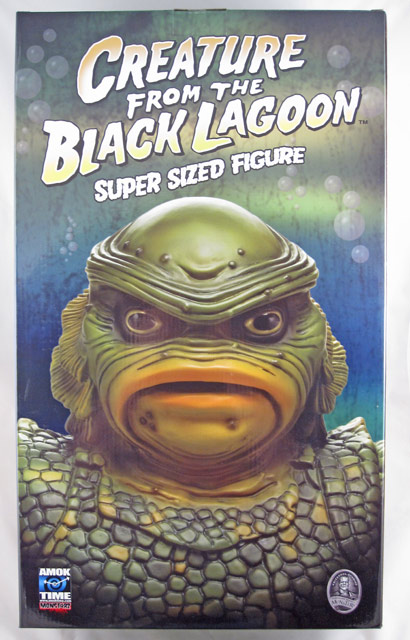 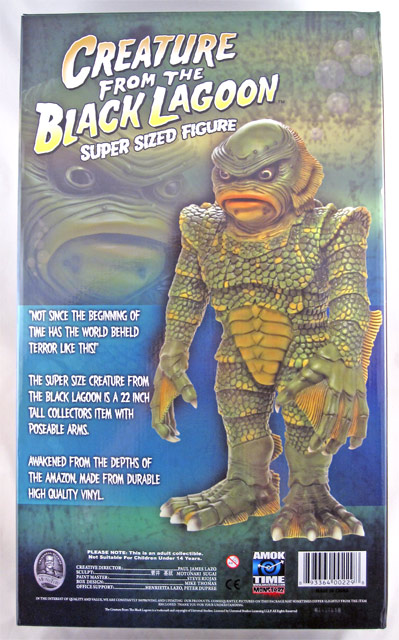 Upon opening the box, you are greeted with a large white inner box, with opening flaps to allow you to get the toy out. The toy comes in a large plastic bag and secured with twisty ties to hold it in place. You need to remove a separate piece of cardboard on the back to access these ties. It sounds more daunting than it is, but I was able to free it from the packaging in no time flat, which was good because this arrived about 10 minutes before I needed to go to work and I didn't want to wait to open it! 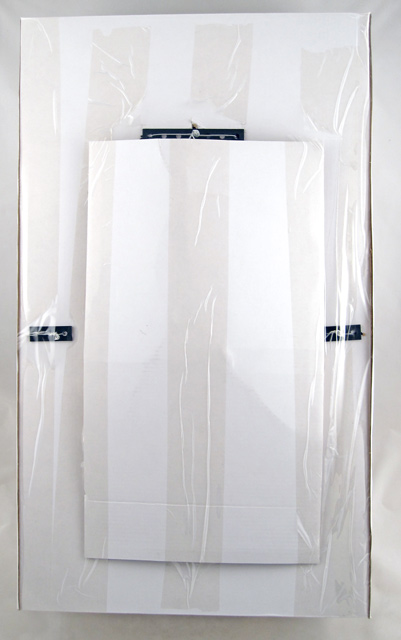 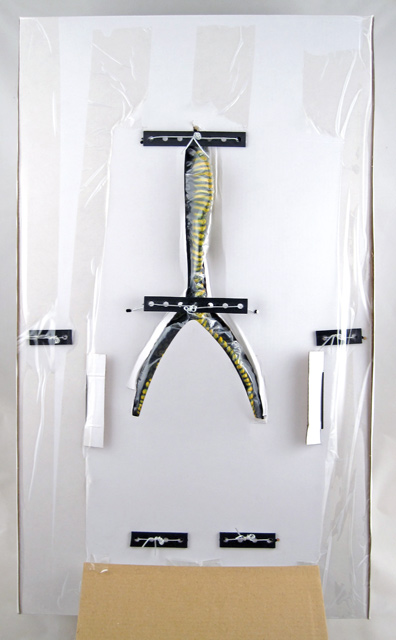 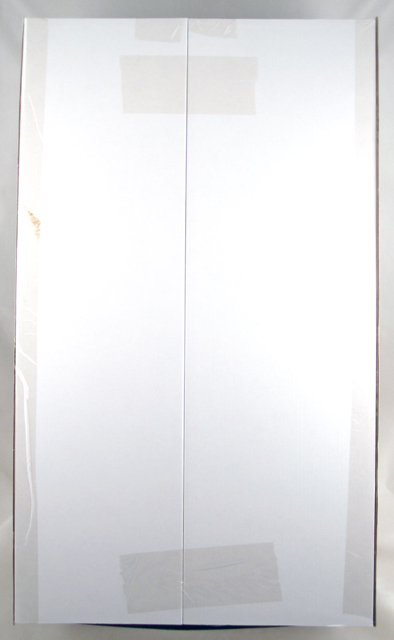 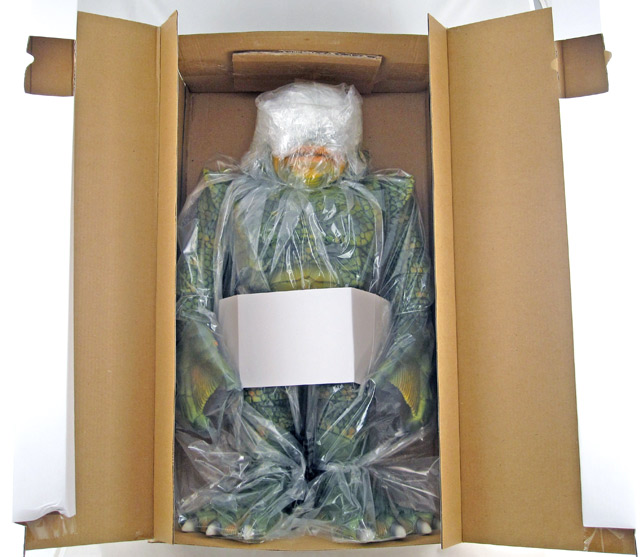 This is one of those toys that makes an immediate impression as soon as you pick it up. The reason for this is simple. It's heavy! Outside of the 32" Fewture Gigabyte vinyls, I don't think I've ever held a heavier vinyl toy than this one. 5.5lbs of vinyl are packed into it's 22" tall, 13" wide frame. If size and weight are important to you, then you won't be disappointed. This thing is really a big, solid brick of a toy. 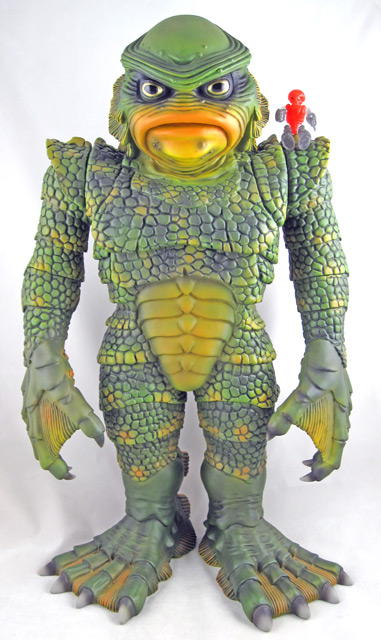 Like most vinyls, it has limited articulation. In fact, only the arms are movable. So although we tend to refer to these things as toys, it's best to remember that this is more of a collectible display piece and not get so hung up on the idea that it doesn't "do anything". It's simply meant to look good and impressive. 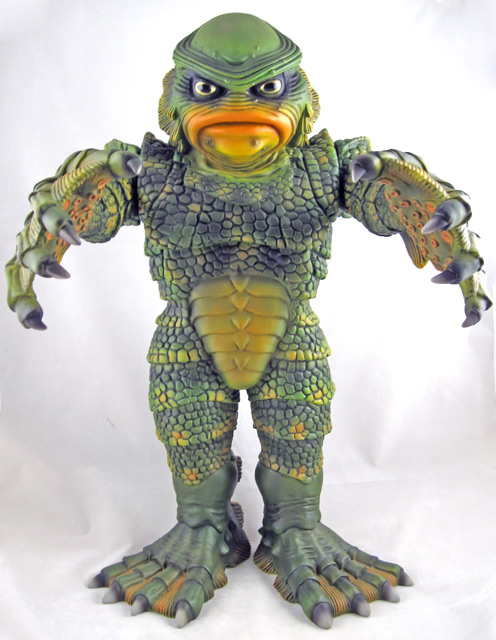 It's certainly impressive by virtue of it's size, but does it look good? Well, I can't answer that for you as that's a matter of personal taste, but it's certainly a unique take on the character. It's definitely stylized but I think it doesn't go as far as being too cartoony or super deformed looking. I like it, but I also wonder if I'd feel the same if the figure were only 6" tall? I tend to be an easy sell when it comes to larger toys. Still, it's not 6" tall, it's 22" and as such, I'm very happy with it. 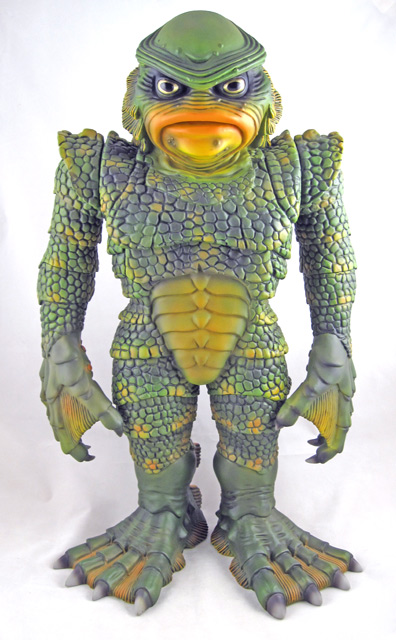 Regardless of how you feel about the design, I can assure you that the execution is excellent. This is a well sculpted piece with solid paint applications throughout. I'd never quite noticed but the "whites" of the eyes are actually gold. Of course, the lips are not red like they should be, but that's at the insistence of Universal Studios (and a major point of contention among collectors.) I'm sure you can paint it if you so desired. 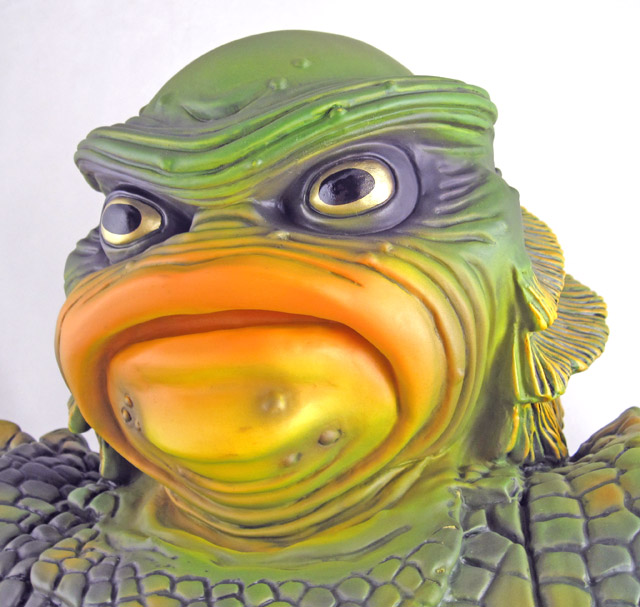 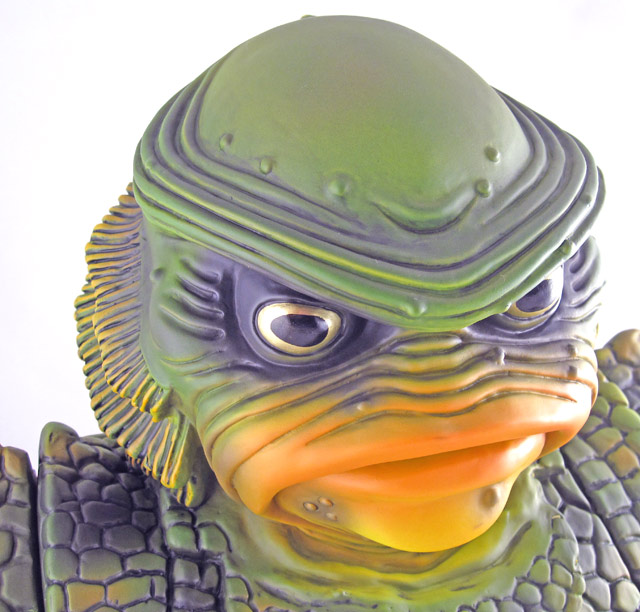 Despite what I said earlier about this not being a "toy" per se, as soon as I got it out of the box, I knew where it was destined to go....outside! 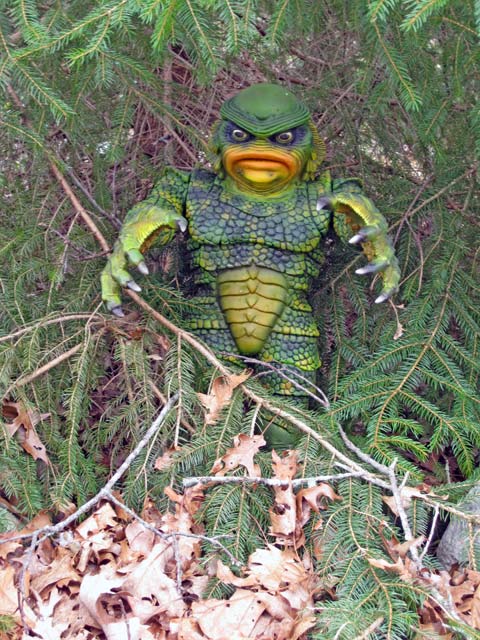 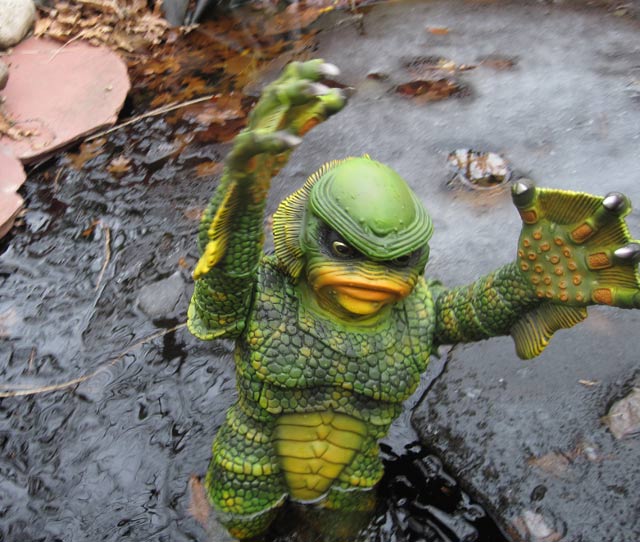 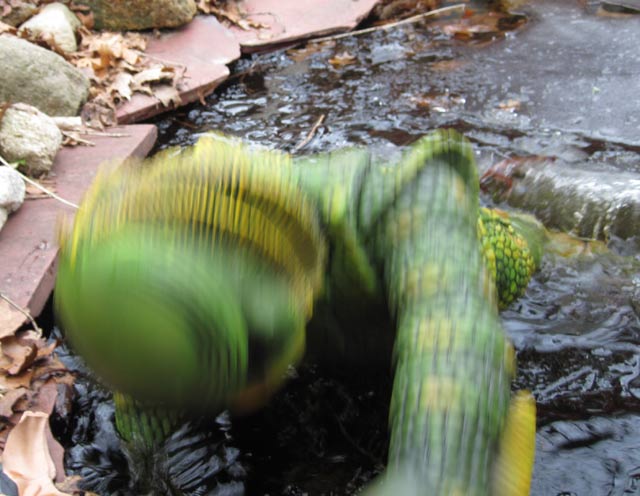 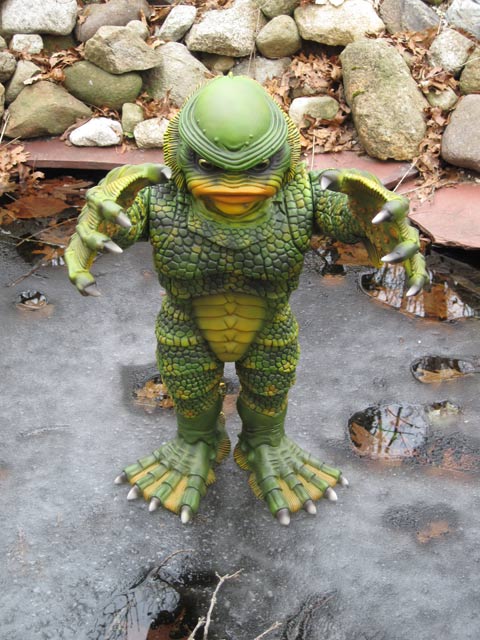 (No, Universal. Creature Ice Capades is NOT a good idea. Don't even!)

Naturally, as a fan of jumbos, vinyls and monsters, I would heartily recommend this one. It's presence on the shelf is undeniable and there were no unpleasant surprises in terms of quality. But chances are, if you're a big Creature fan you've known this was coming and may have already had your mind made up about it one way or the other. But if it's new to you, or you're been waffling and have now decided it's time to get on board, they are now in stock and ready to ship from Amok Time.com. 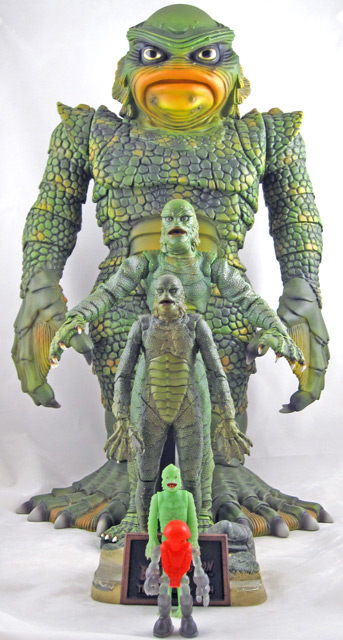 9 comments posted
Even though I'm not a fan of

Even though I'm not a fan of the actual film, this is a great piece. Love the photos also!

It looks gorgeous! I love the photo with Pheydon sitting on his (it's?) shoulder.

I love the detailing on the scales, and I really like the face sculpt. I kept looking at it and then it clicked. He's a Kappa!

Ha! You know, I never really thought about, but yeah, he sort of does remind me of a Kappa! It looks like the sculptor is Japanese too, so maybe that's no accident.

Not a fan of vinyls, the piece, or the creature BUT your review was interesting, concise, enjoyable, and incredible picture taking...really looked like your creature was coming out of a black lagoon.
Bravo

Thanks very much! It's always a challenge to make reviews of these types of toys interesting, so I'm glad it came out ok. Unfortunately, even at five and a half pounds, the Creature is still buoyant so the shots in the water had to be taken in a split second before he rose up and fell over. Those were the two best I could get. Not perfect, but not bad. lol

Nice job Dave! Nice colorful toy.
So that explains it. The bobbing figure gave you those motion blurs in the water shots, but it worked out perfect, as it looks like the figure is animated, and lunging right out of that koi pond, or whatever it is. heh heh.

Exactly! Normally, I'd ditch a picture like that but since it accidentally lunged right toward the camera, I liked it.

I would suggest that the lack of articulation or action features is exactly what qualifies this as a toy. If that's not enough, you photographed the thing in a Koi pond, which is exactly the kind of situation a toy might find itself in. In fact, the only reason we can say it's NOT a toy is the hefty price tag, yet I'm sure that even in this economy there is a lucky little kid somewhere beating the crap out of one of these right now.