Col. Miles Quaritch is a character in the upcoming movie "Avatar" by legendary director James Cameron. I'm not sure of his role in the film, but judging by his scars I'd say he is the bad guy of the film. 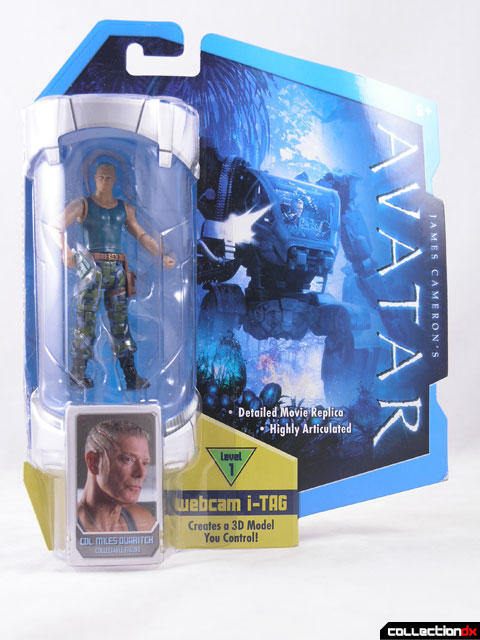 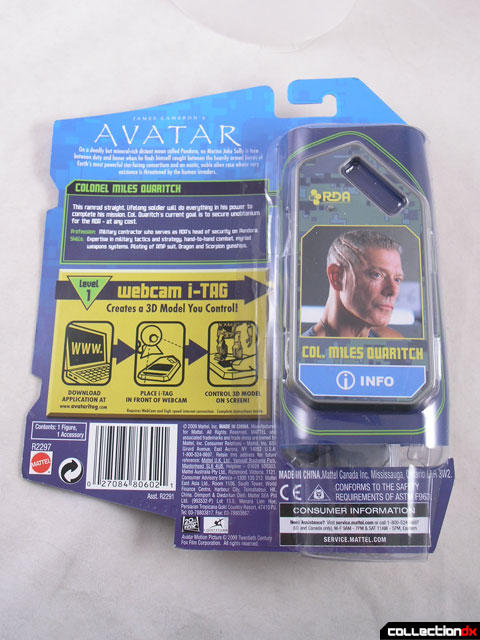 The toy is in 3 3/4 scale, making him compatible with Star Wars, GI Joe and other like action figures. 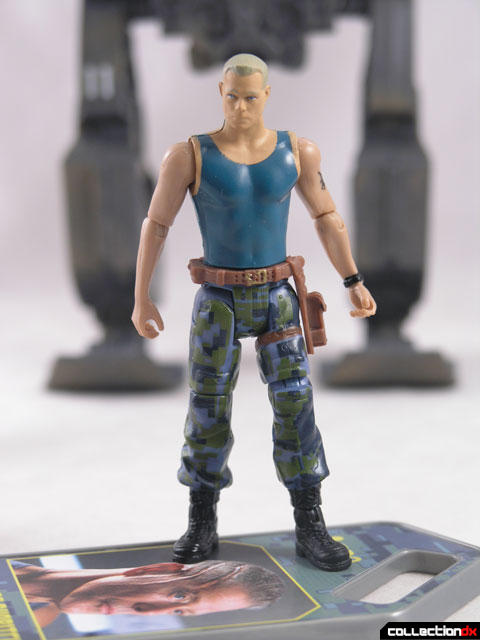 The main gimmick here is that the figure comes with a stand that doubles as a chip for the "Augemented Reality" feature. Load the software from the website and place the iTag in front of your webcam and a 3d model is projected. While the AMP suit projected a model of a suit, the Quaritch tag projects the image of a hover vehicle. It's a neat effect, and honestly, the figure is secondary to this gimmick.

But the figure is not bad, just average. 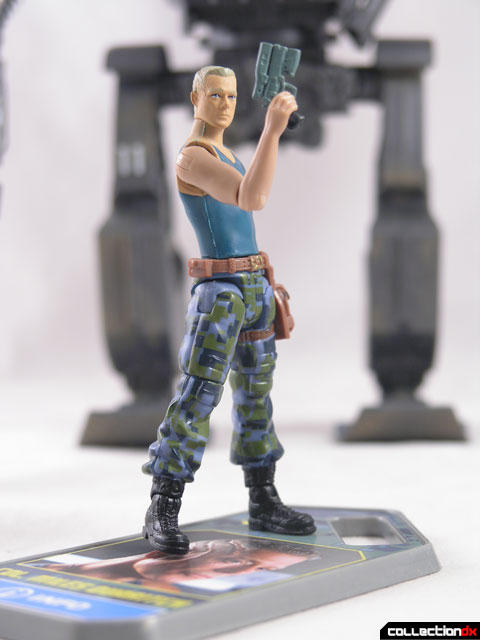 Articulation is good, but not stellar. The figure has a swivel neck, swivel waist, ball jointed shoulders, bend and swivel elbows, Legs that move both forward and out, swivel and bend knees and ankles. It's pretty good, but lacks some crucial articulation that competing figures have. For one, why no ball joint in the neck? The simple swivel really limits movement. Also, the figure could benefit from a torso joint, a feature that is now the rule, not the exception for figures in this price range. 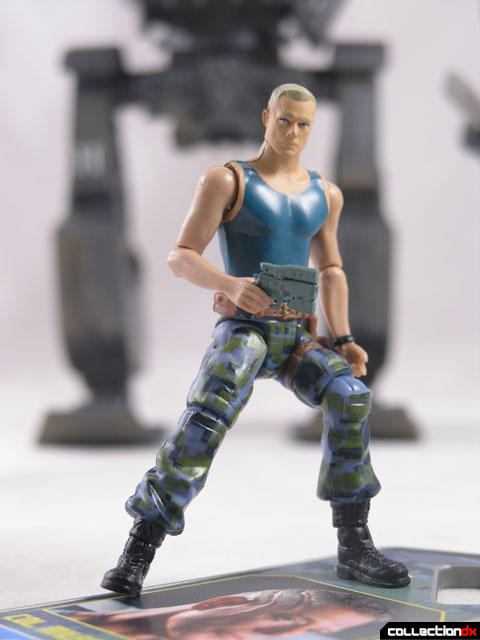 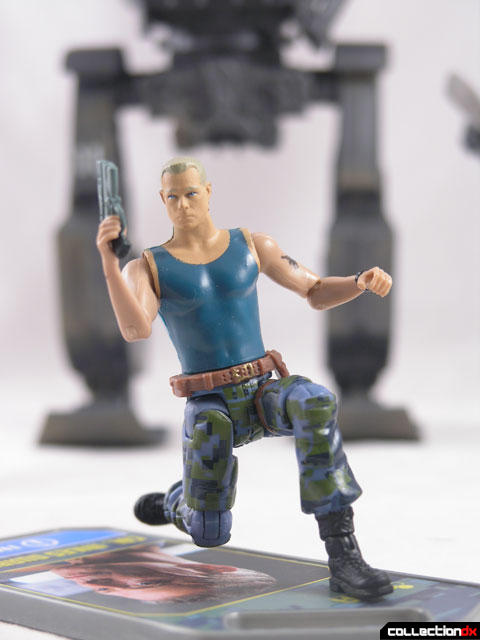 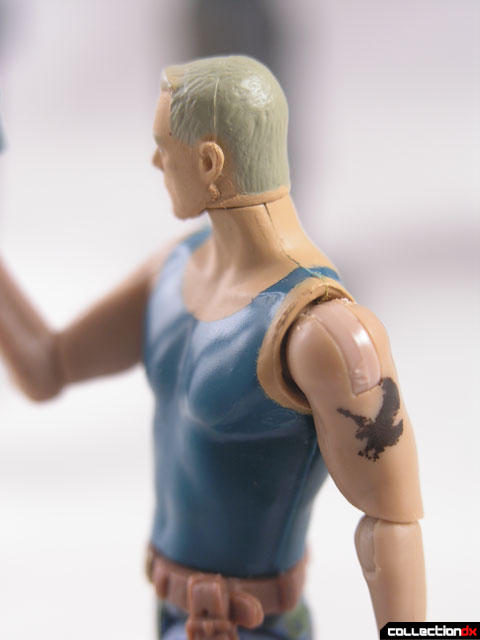 Col. Miles Quaritch's only accessory is his gun, made of soft pliable rubber. he can hold the gun in either hand, but the gun cannot store in the holster, which is a solid molded piece. 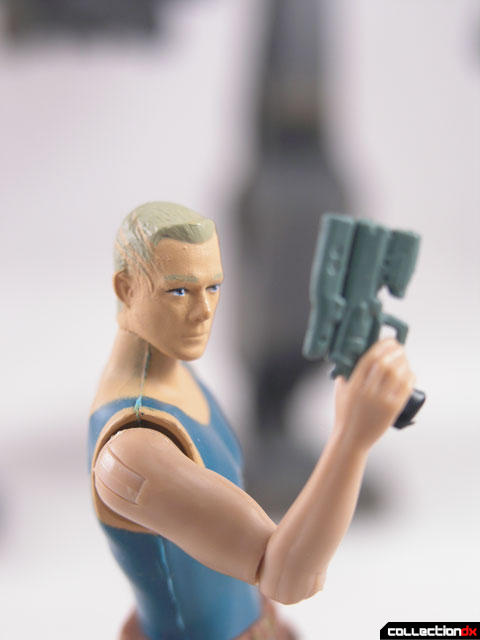 The only reason to get this figure is to sit him in the AMP suit, which he pilots. As a toy, the figure is boring. The iTag feature is fun, and people will likely get him just to have the tag to complete their collection. But for kids - unless this character is STELLAR in the movie, they will likely be disappointed.

It's like getting Lobot or an Imperial Officer when you wanted Boba Fett.

The close-up shots truly reveal the very poor deco detail and boring sculpt!
I agree with the analogy of the cam gimmick attraction, however, this hunk-O-crap should come WITH the AMP suit!!!
Mattel misses the mark here for what looks to be a good movie.
Grandzinga....

wow, I never realized how out of touch I am with todays action figures, this little figure (which by the way is my first in MANY years) seemed really cool to me, this coming from someone whos last figures were the original Star Wars from my youth. I bought him to go into the AMP suit but he now resides inside of my DMZ-02 Takara Strikedog in which he fits perfectly.

Imagine my surprise when Josh says he is average and Grandzinga calls him hunk-o-crap haha, I am really missing out on whats out there! Well, no big surprise since I dont collects toys, Im really only into robots. Im used to figures with swivel shoulders and legs, maybe head (oh and flimsy old GI Joes)..this one had so much more than I ever saw in my limited experience. I like figures in this scale, can anyone recommend a really articulated figure of this size so I can check em out? Maybe Microman? My DMZ-02 has one but I dont want to mutilate the box to get it out. I want to modify one to look like me but I cant seem to find one thats handsome enough and has huge muscles :P

I hear you. I'm WAY outta the loop when it comes to action figures. I used to get GI Joe's back in the 80's, but every time I see a new one (or a new Star Wars figure) in a toy store, I shudder. They're SO over-priced...AND they usually look terrible. When did action figures get so damn anorexic!?

Yeah.. I noticed that anorexia took hold with the release of the star wars_clone wars figures. Just compare them to the older S.W, figs('90-'05) and you can just imagine the overall amount of plastic $aved by the manufacturers. Figure prices continue to rise as well.

When I get into these tiny scale figures- I stick with G.I. Joe and Microman for sure.

(Look at this guys horrible chest sculpt and the arms to sholder transition. Fuhhhgly!)
$9.99? No way- ever.

Is it anorexia,or were the older figures just out of proportion?
I mean,if we're using Star Wars as an example,I seem to remember 90's Luke Skywalker looking like Brock Lesnar.

I do miss the old Joe articulation,but that's nolstalgia,I don't think the figures looked objectively better with oversized pelvises and big brass fasteners in their shoulders.

I agree the 3 3/4 inch figures are WAY too overpriced in general,but aside from the price I think the modern G.I. Joes,Star Wars,and Marvel Super Heroes kick the crap out of what we had as kids.
Target recently knocked down the price of the Joes to 5 bucks,and a 2 pack of Marvel characters is like 12,so there are prices out there that are somewhat reasonable.

Chachi,if you think this AMP suit guy is cool,then I would say the next time you're out at Target,Walmart,KMart,etc. you should definately grab a G.I. Joe or a Marvel Universe (the Joe sized ones) just to see how awesome they are.

Well, okay--cost aside, are modern 3-3/4" figures better than the "gold standard" of the 80's: GI Joes? Well, with CAD and rapid prototyping, it's great that modern figures actually have different anatomies. Modern Snake Eyes is skinny and short...while Gung Ho is diesel! Back in the day, they were basically identical...just with different molded details. It's like they had the same blank body that they just sculpted different details onto for each figure. So...Lady Jaye was essentially no different from Flint with boobs! :P

But all that said, I just don't like most of the newer figures. The rubbery feel of the soft PVC just feels like junk compared to the hard ABS plastic of the old-school figures. Sure, old GI Joe's often developed loose joints after they're played with a lot, but I've had modern PVC figs with loose joints out of the package. And, of course, we have the questionable proportions we discussed before: anorexic soldiers? No thanks!

On similar bent, I noticed all the GI Joe figures...even the anniversary editions...are skinnier and look like this figure...i miss the more robust figures of the late 70's and 80's...