CLU is the villain in TRON Legacy, the long awaited sequel to the original 1981 TRON.

CLU was introduced in the first Tron movie as Kevin Flynn’s avatar in the virtual world. He goes hunting around for evidence that his former employer, Encom, stole his Space Paranoids video game. However, CLU meets his end when SARK catches him, tortures him for information, and De-Rezz’s him.

So how is he back? Well, you will have to see the movie to see I guess. CLU is a program, and you can make copies of programs, can’t you?

This figure of CLU depicts him with the visor down, masking his identity. They probably sold him like this in the hope that the villain identity would remain secret, but now his face is all over the movie trailers, the secret is out. That, or the fact that all the facial sculpts in this line have been crap.

(In reality, selling the figures with masks on bypasses having to have the "talent" approve the facial sculpts, thus getting them to market sooner)

First - the card. The cards for these figures are really phenomenal. Nice, bright colorful graphics with a die-cut shape. They look great on the racks, and practically beg you to buy them. The bubble on each figure has a hole in it with a tab that you can pull out to activate the try me feature. 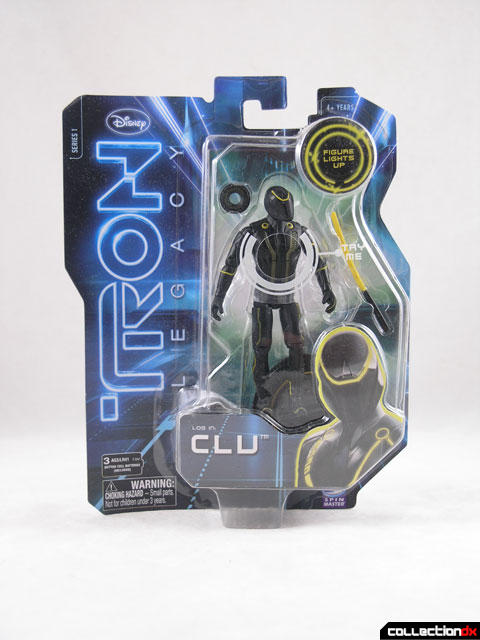 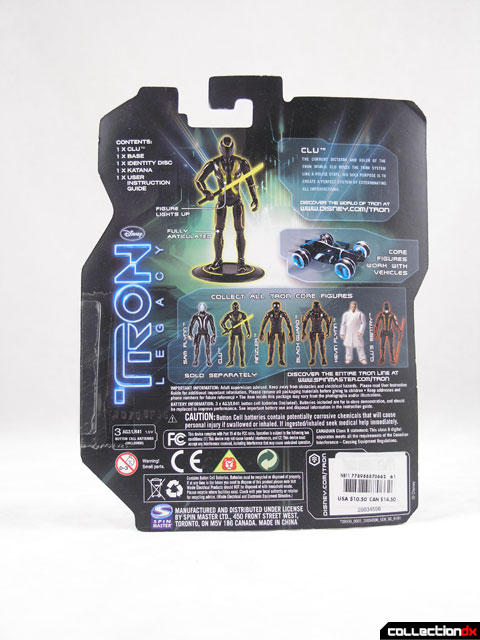 Once you get the figure out, well, that's when it all goes to hell. 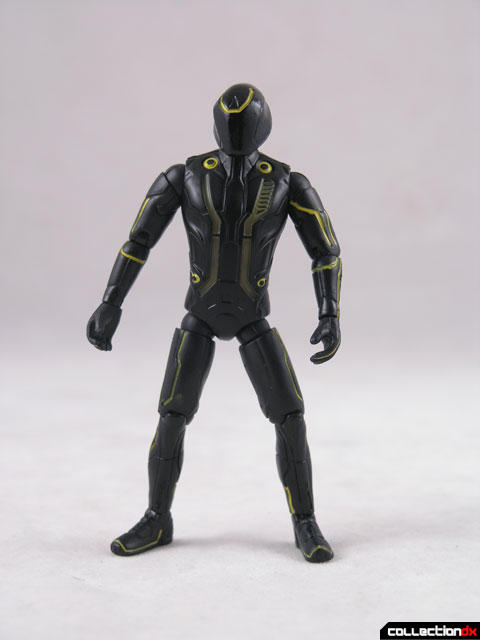 On the surface, it looks like a good figure. Good articulation, good paint, good surface detail, and a neat light up feature. But once you start to play with it, and the limbs basically fall right off, you know you have a problem. 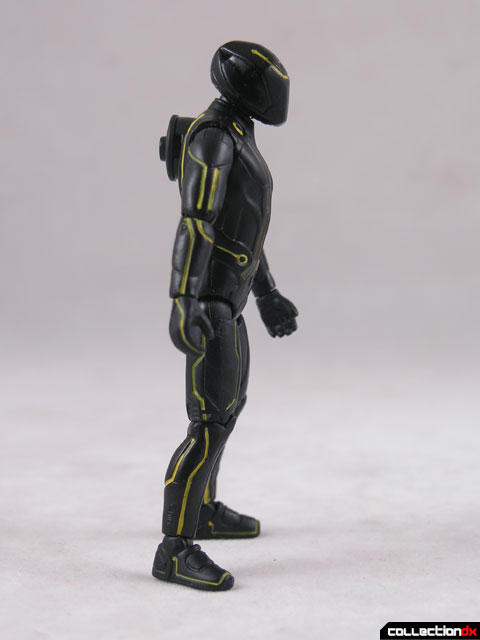 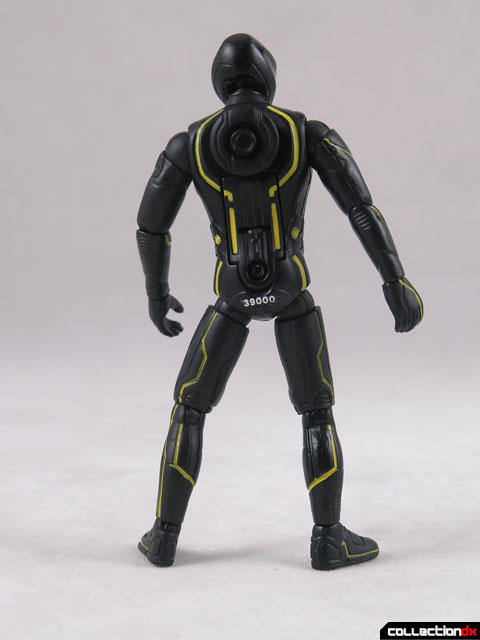 Much like the Rinzler figure, Clu is nicely articulated. Everything moves the right way, but some joints are just not that thought out. For example, the hips have great movement in the joints, but the body section restricts any extreme poses. 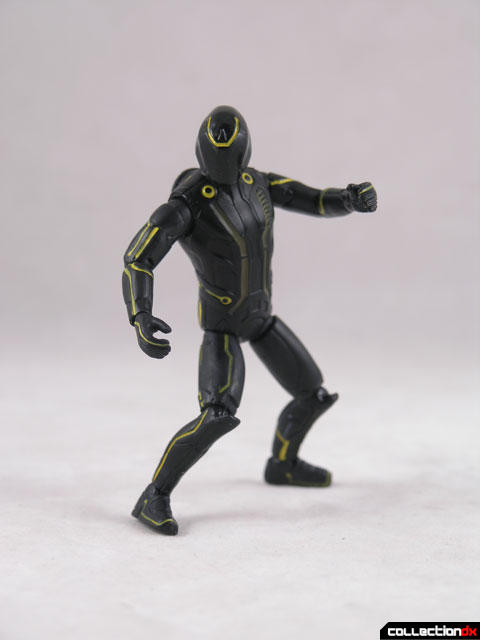 The joints are like modified Revoltech joints - swiveling ball joints that plug into limbs. the thing is, these don't fit tightly, and result in really loose, or even worse, detachable limbs. It's just a huge letdown.

CLU comes with an identity disc that cannot store on his back (this should be a given), a light-katana which you never see in the movie, and a stand. 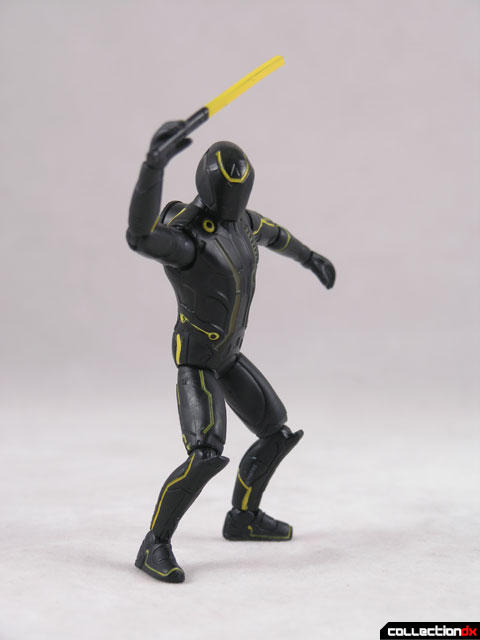 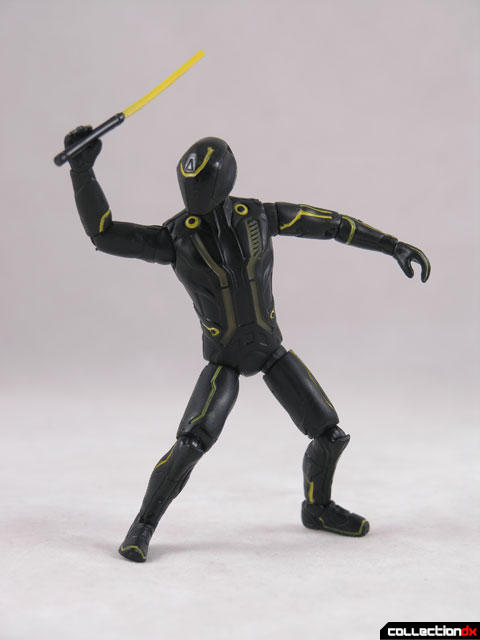 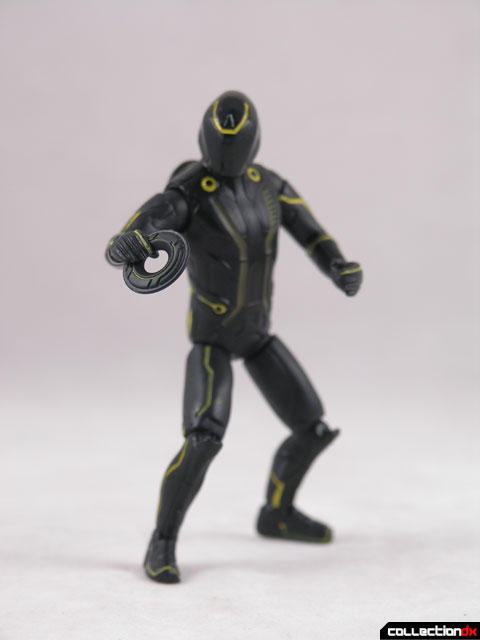 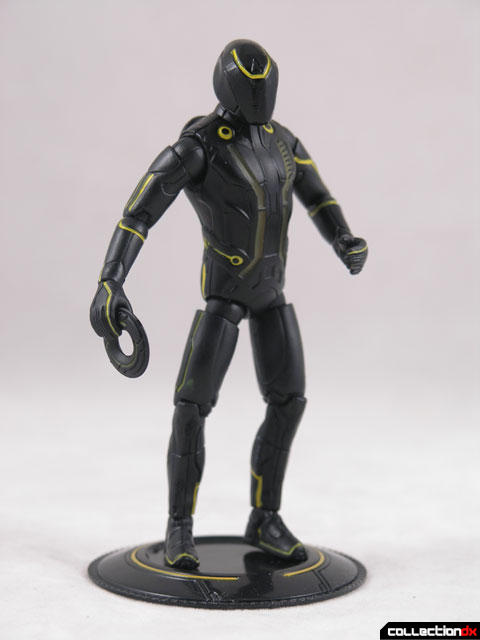 The light-up feature is cool, and works well. Activate the lights by pressing a button on the back. You lose proper proportions and articulation in exchange for the lights - whether or not its worth it is your call. CLU looks too barrel-chested for my tastes. 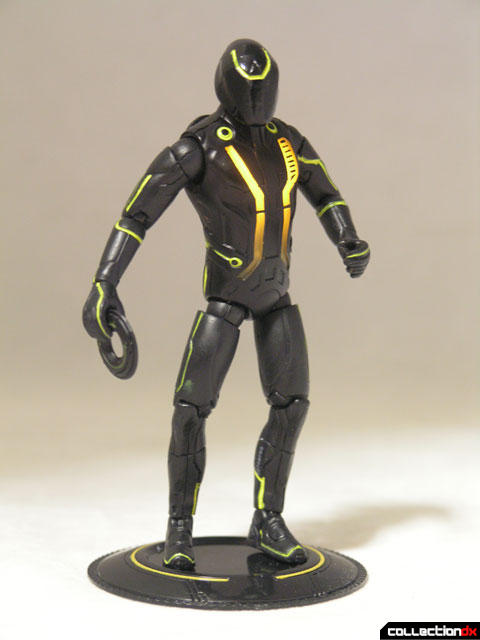 I'll be honest - I thought these figures weren't that good before I saw the movie, and now that I've seen the movie, I'm a bit angry. The movie was so awesome that I immediately wanted to go out and buy them all, but the fact that they were such piss-poor figures really turned me off. Now I am in an awkward position because I am compelled to buy them all, even though they are terrible. 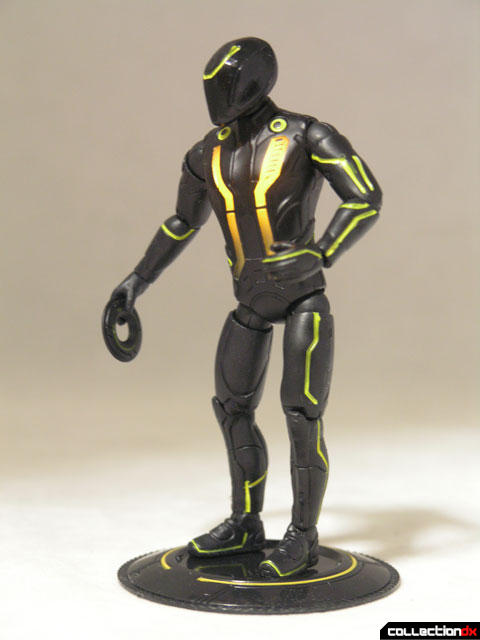 What kills me even more is that Spin Master has greatness in them. The vehicles for this line are really great, especially the new Light Jet. What happened? Here's what I think:

- Lack of action figure experience. Spin master should have outsourced these to someone who knew what they were doing, with a factory trained in making action figures.

- Lack of pre-planning. These figures were mapped out well before they had seen the actual film. They were probably given very basic character models to go by, with inaccurate weapons. When you first meet CLU in the movie, he's got this awesome cloak on - why not do THAT CLU? Quorra with a HELMET? Rinzler with NUNCHUKS?

- Lack of coordination between teams doing figures and teams doing vehicles. The vehicles are great, but the figures barely work with them. Was there no communication? When you make a cool gimmick that involves the figures interacting with the vehicles, how about making it work consistently with all figures. Creative play is not limited to the roles the characters played in the movie.

- Lack of quality control. Once again - the vehicles are great, but there's no way these figures should have made it to market. Reports of duplicate, broken, or loose limbs abound. Visible flash remains on the figures. Spelling errors on the packaging.

Buyer beware. I'm getting them only because I liked the movie so much, and in hopes that they will improve the line if sales continue.

Loved the movie, compelled to buy these crappy figures just because I can go to the store and buy TRON figures! Dead on review of the toy. The vehicles are nice, the figures a let-down. At least the larger ones give you the ironic entertainment of the face-projection gimmick.

I liked the movie as well but it doesn't compel me to buy the figures. I think it would've been an awesome toyline if it were made by Mattel toys. I also think the movie would've been more awesome if someone like Shuki Levy got on board to compose some awesome 80s buttrock techno-music.

There is a number of companies I would have liked to tackle the license before Spin Master. Even though I personally have not had any quality control issues with my figures, I think Zizzle would have done a better job with the line. And they also had enough experience in electronics to implement some sort of light-up action feature, if they wanted to.

It would have been too much to ask for Hasbro to take over the license, but I for one I'm glad it didn't go to Mattel, since their distribution is simply horrible.

Edit: Oh, and yes, I did buy all of the figures and the vehicles well before seeing the movie, and I'm glad I did because it has proven to be nigh impossible to find the things a week after the movie premiered.

Interestingly, the number on mine is printed at the inner left calf, not the butt.