So, if you’ve followed me on Twitter for any length of time, you know that Tatsunoko is pretty much one of the most important things to me; it’s basically everything I love about anime in one convenient and highly identifiable package. And of Tatsunoko’s shows, Shinzou Ningen Casshan is consistently my favorite (I go back-and-forth between it and Hurricane Polymar, but Casshan usually tops out). 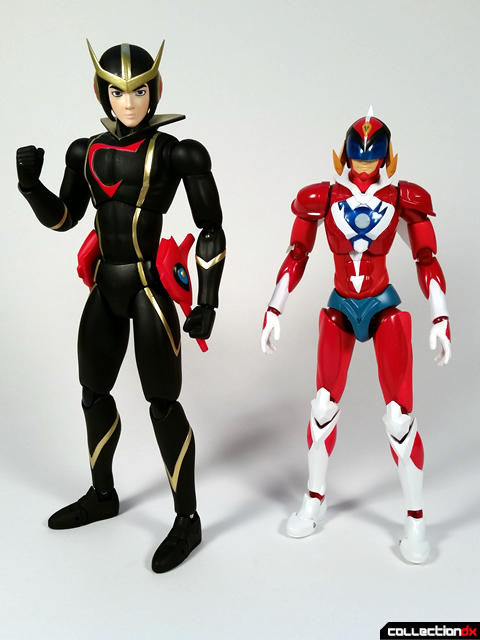 Today we’re looking at the A.I.M. (Action In Metal) Casshan and Friender Black version action figure set. This is exactly the same as the previously reviewed figure set… but this one is black. And before anyone asks, no, Casshan never had a black suit in any Casshan anime; this is simply a callback to how toys in the 60s used to have black versions of a regularly colored figure.

Moving on, we can see right off the bat that this figure is black--of course--but also rather solid with a well proportioned and clean sculpt: 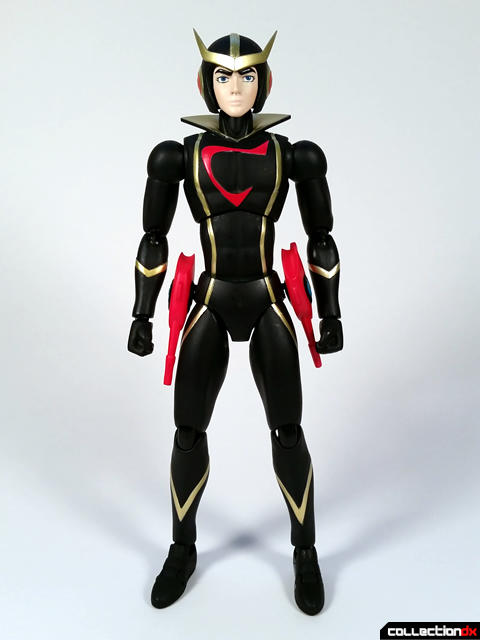 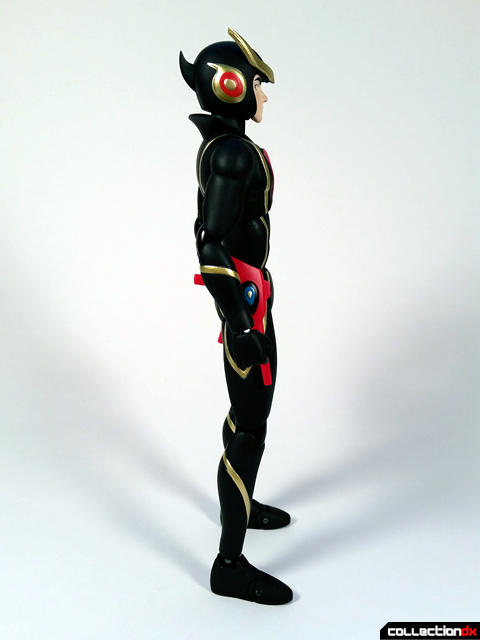 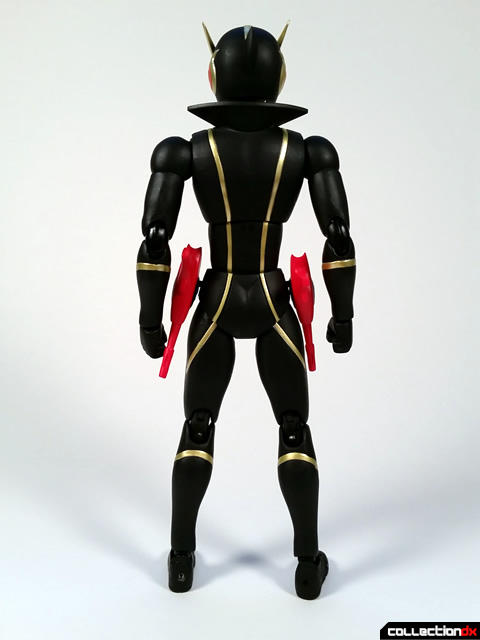 Casshan’s joints meld right into his body and hide particularly well with few destroying gaps. Methinks this is as true as it is because the figure is entirely black which tends to hide obtrusive shadows, but the fullness here is evident with any base color.

The sculpt includes muscular structures and a fair bit of detailing for such a flat suit as far as the anime is concerned: there are bevels, troughs cut in around the gold accents, and the entire “C” is raised on Casshan’s chest, something that easily could have only been painted on. 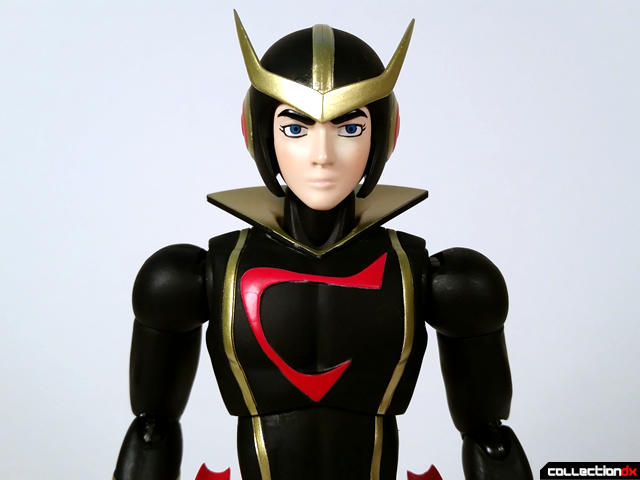 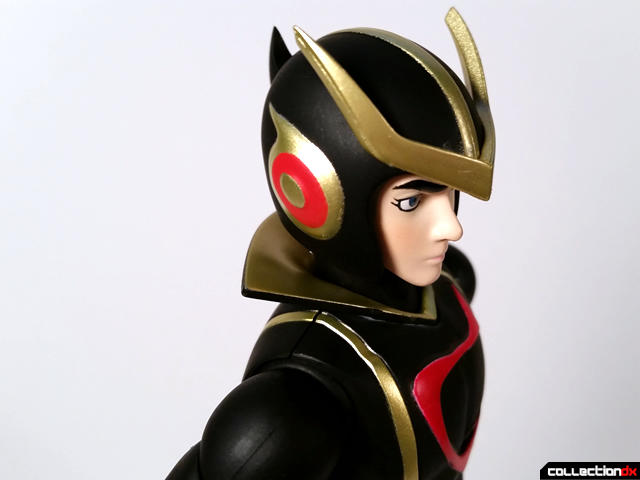 Speaking of paint, the paint isn’t SUPER tight, but for how much needed to be painted on and how skinny all of the painted detail is, I can kinda forgive the rough edges; that being said, the effort here is noted and effective: 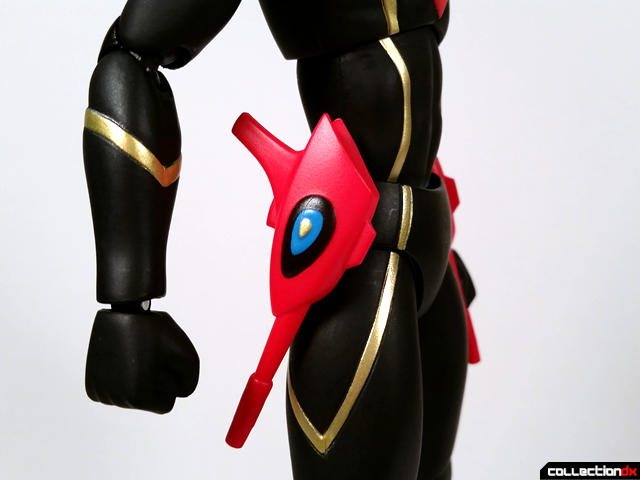 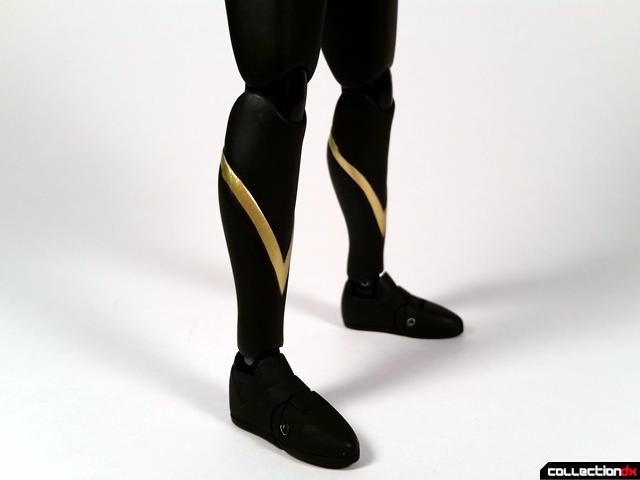 Articulation on the A.I.M. Casshan is a mixed bag. His joints are tight and he possesses all of the major joint types that traditionally allow for wide, emotive posing--but things start to fall apart from the waist down. Like, shoulders are ball-and-socket with bicep swivels, double-jointed elbows, and ball-jointed wrists connected to a truck with a ball-jointed chest and waist, and this is all great and provides a commendable range of poses. 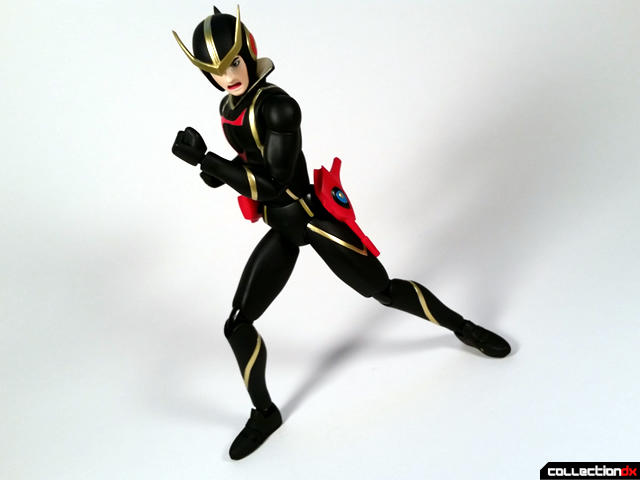 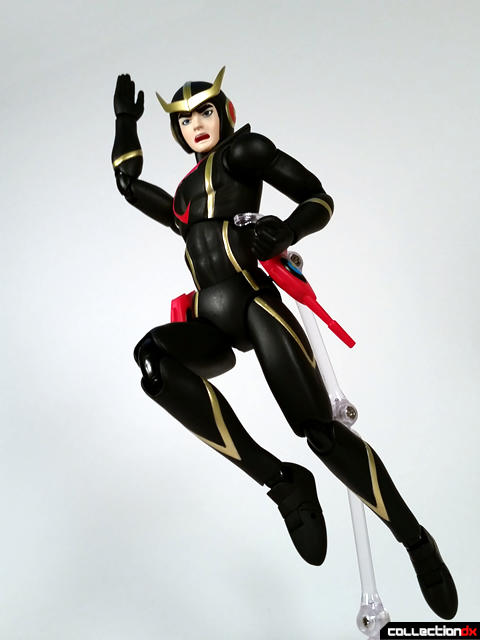 The legs, despite having double jointed knees, universal hips, ankle rockers, and toe hinges, are restricted by the sculpt and don’t allow the involved joints to maximize their range, especially the knees, hips, and ankles (you know, where the majority of balancing comes from). This is a shame as I couldn’t really get Casshan to do a lot, namely some of his classic poses and attacks. 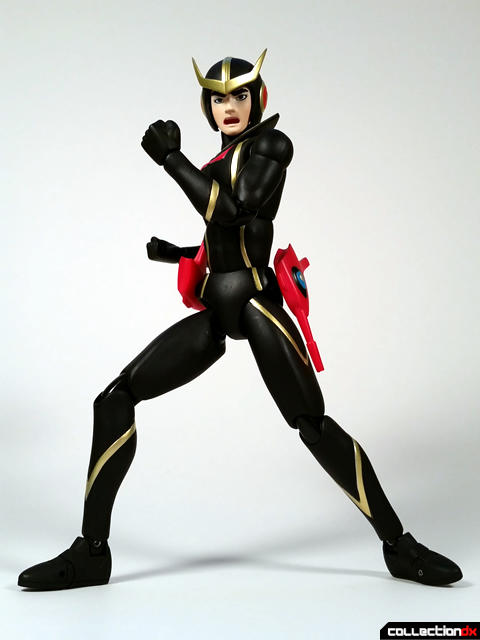 But he CAN do his take off pose, so there’s that: 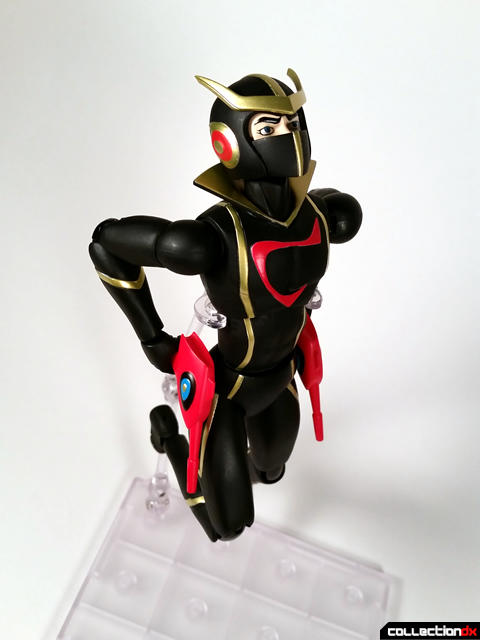 The Neo-Cyborg stands at approximately 8 inches, so he might have a hard time fitting in with your other toys; that being said, he’s a HECK of a shelf presence: 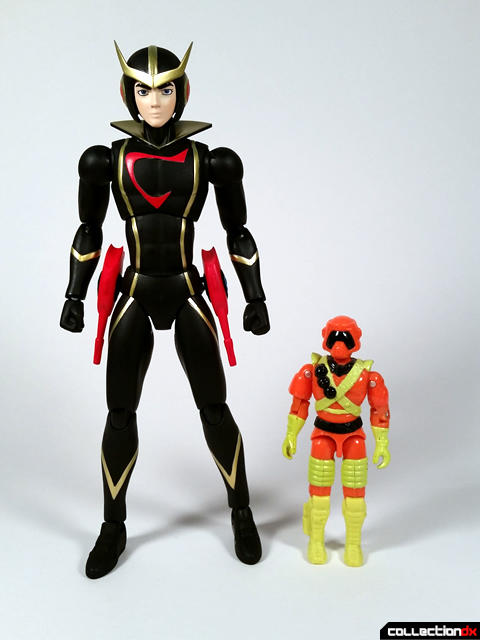 Casshan’s build includes some diecast metal, and Icarus made sure that the figure can hold it and not be thrown off balance because of it; this is great to see from a collector’s point of view and because the FightinGear figured screwed this up: 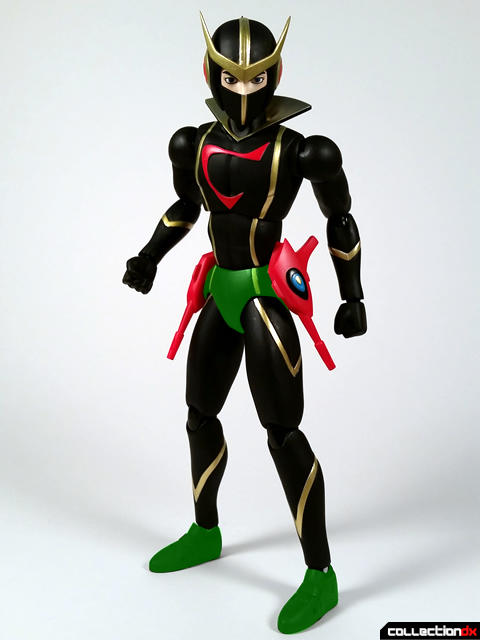 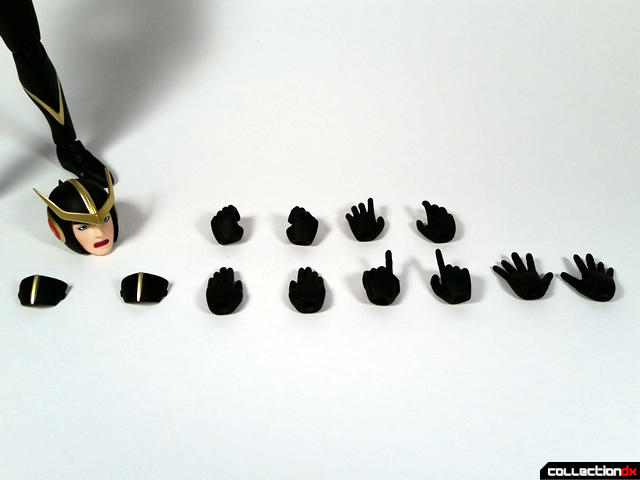 These accessories make me happy because they were exactly what the FightinGear figures were missing: swappable, emotive faces and character appropriate hands. This figure can do Denkou Punch, Boulder Chop, Flying Drill, and Super Destruction Beam--and look like a badass while doing it with the optional “AHHHHHH” face! 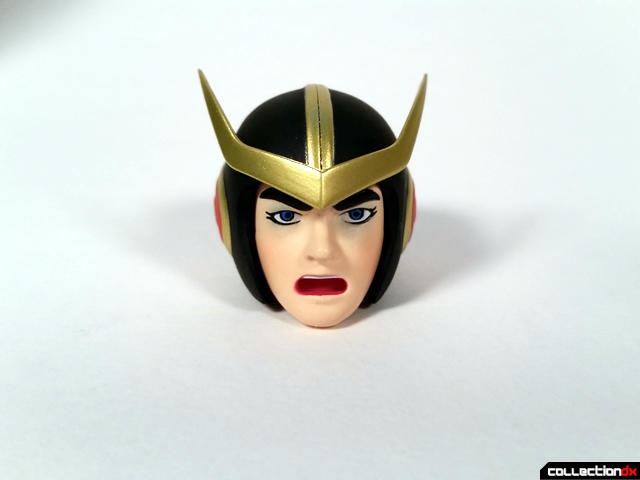 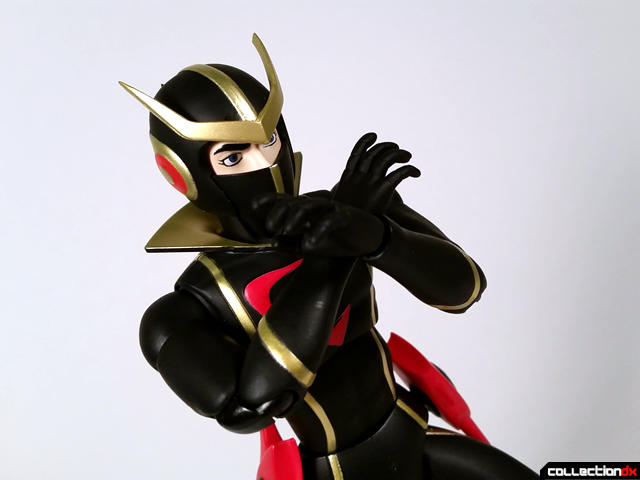 The faceplates attach to each head via tabs that snap behind the helmet: 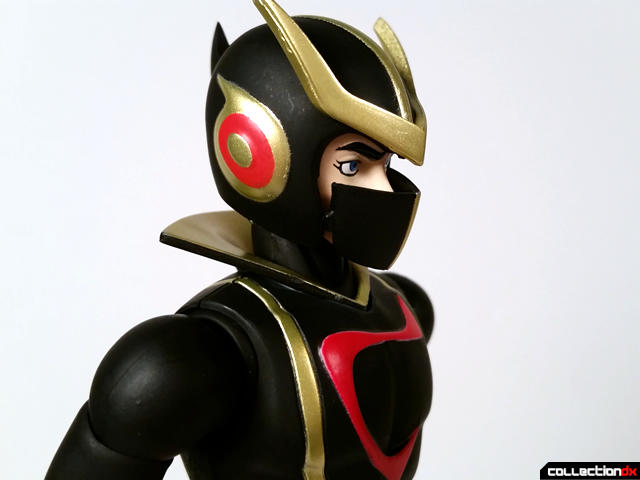 A couple of notes about the accessories:
- the stand sucks

It’s a claw-type stand, and a shallow one at that, so it can’t even hold onto Casshan, so don’t even bother 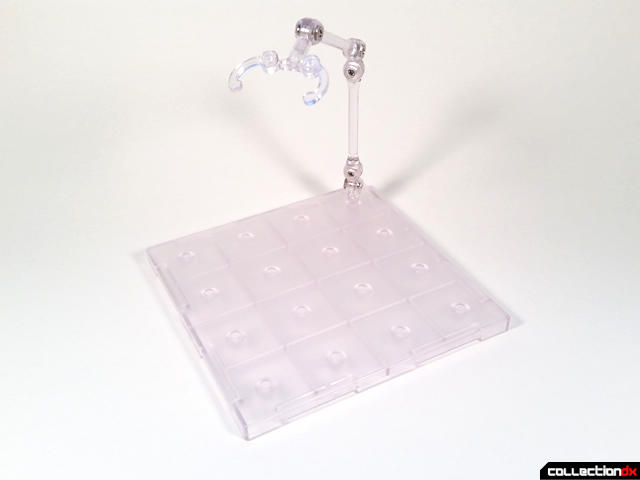 - the hand and neck joints are impossibly tight

I got "glyos thumb" from changing the hands on this figure; heck, I had to break out the pliers to get them on and off the pegs! They’re simply not fun to manipulate, which is a shame seeing how much playability the accessories give. Oh, and my neck joint BROKE because of how tight it was: 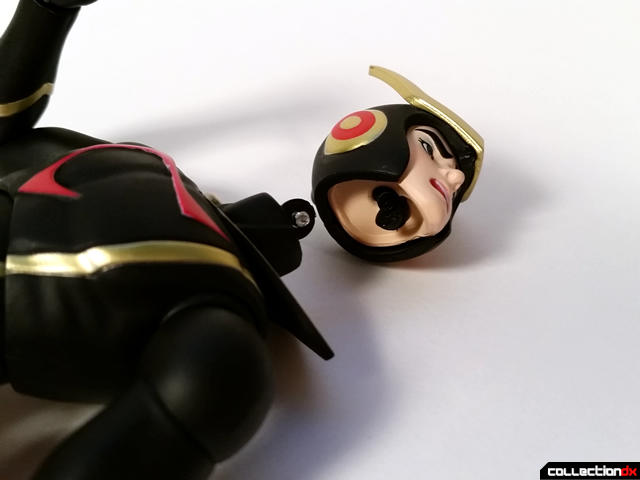 This figure is sturdy, but kid gloves are NOT optional; you may even want to consider keying out the holes on the hands and heads a bit to be on the safe side.

Included in this set as well is Casshan’s robot dog Friender, and he’s honestly a treat. 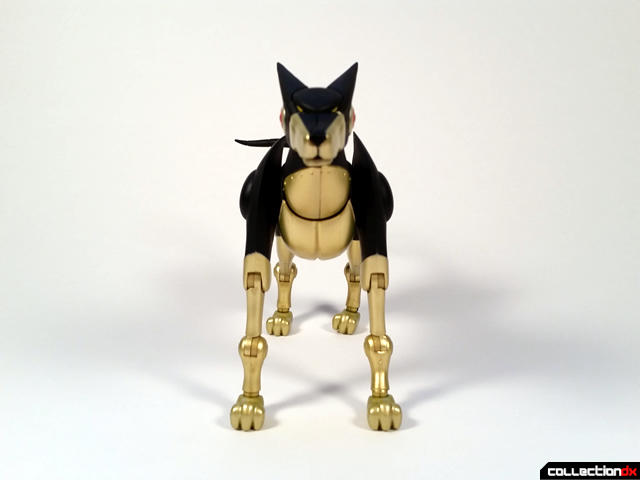 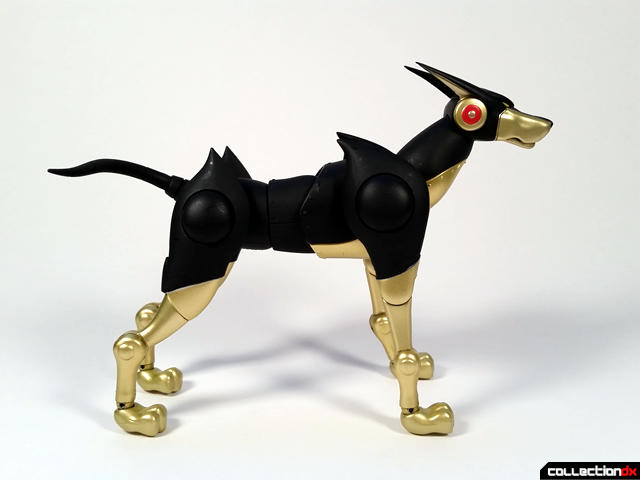 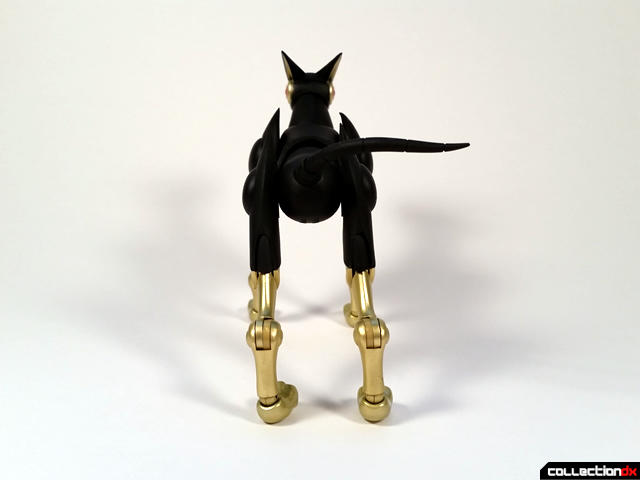 Sporting the same color scheme as our hero, Friender sports ratcheting hip joints and no less than FOUR hinges per leg, a waist joint, neck and head ball joint, and a mouth than can be opened! 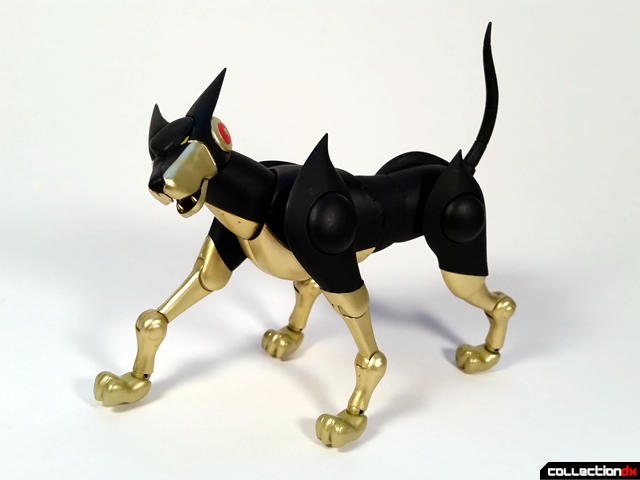 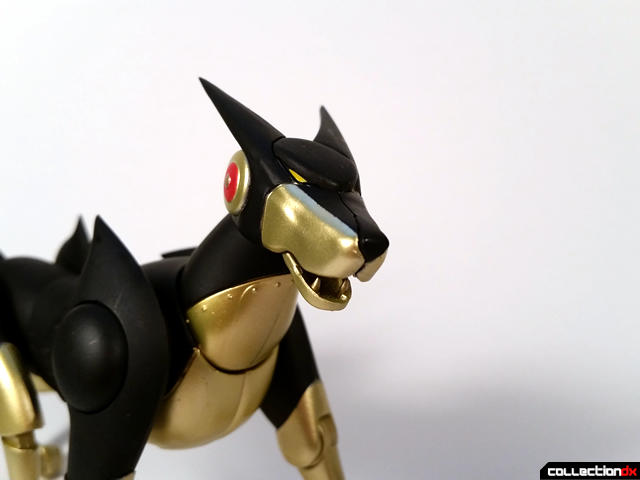 Friender is equally well painted as Casshan and sports and equally accurate and detailed sculpt, perhaps even more anime accurate than Casshan. And although Friender has a good bit of joints, those joints only move in one directional plane, so he can’t really do a LOT. 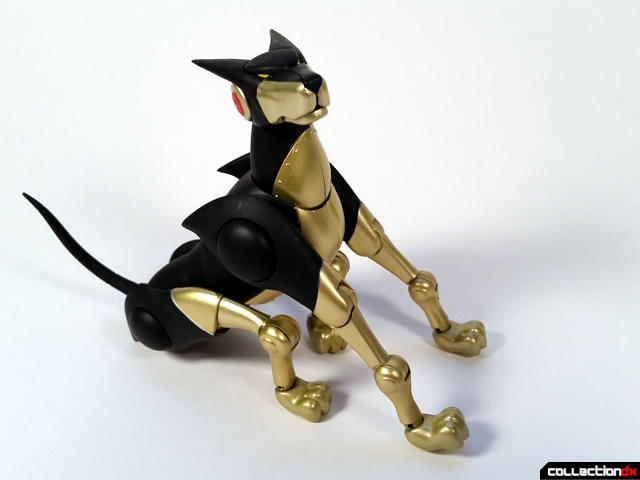 Friender comes with his own set of accessories:
- Four (4) claw paws 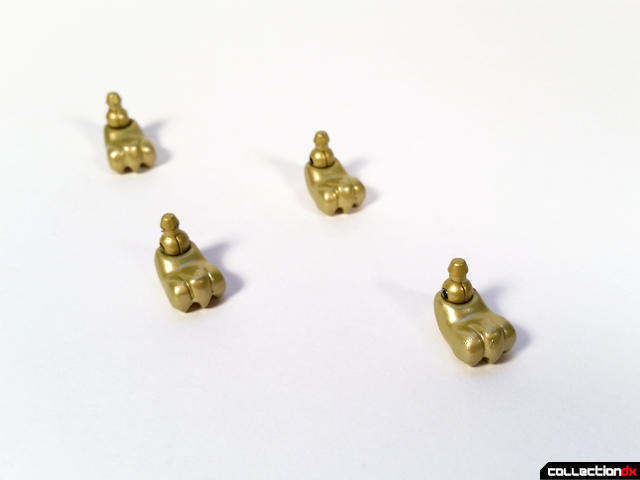 These can be switched out with relative ease to make Friender kill things better. A shame, however, that Friender didn’t come with a flame effect part to emulate his defining fire breath attack. 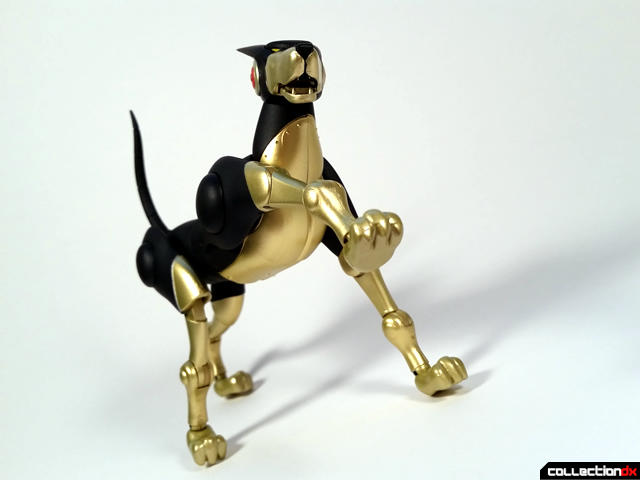 Overall, this is a pretty good set even with the shortcomings.
For $138, I feel like your money isn’t being wasted content wise. You get an 8”, hefty figure sporting diecast and a nice array of appropriate accessories, and Friender. Like, the whole robo-dog. Including them together is a great idea, and I appreciate it (especially since the FightinGear sold them separately). There are some problems--namely the tolerances, leg posability, and worthless stand--that I feel like shouldn't be problems with such a pricey figure, so it's hard to recommend; that being said, if you remember your kid gloves and treat this toy carefully, you should be fine.