Burning Godzilla is brought to us by Big Bad Toy Store

AJProDie-Cast: Hello folks on CDX, today we will be reviewing the S.H. Monsterarts rendition of Burning Godzilla with none other than Godzilla himself giving his take on this commemoration of one his many "death" scenes.

AJProDie-Cast: How nice of you to say, and I do appreciate your refraining from mashing me in-between your toes. 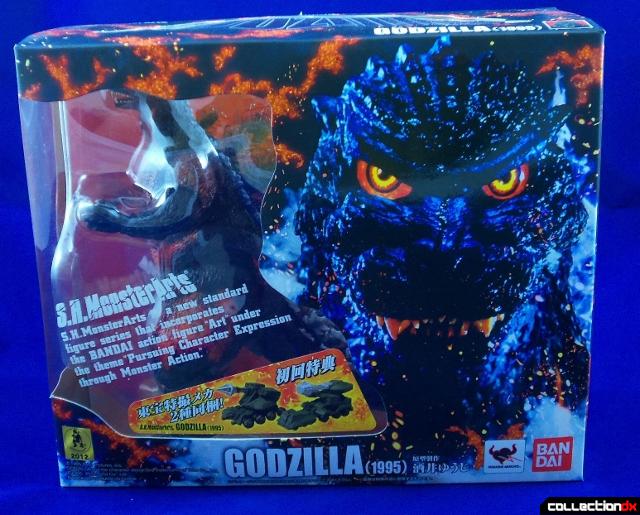 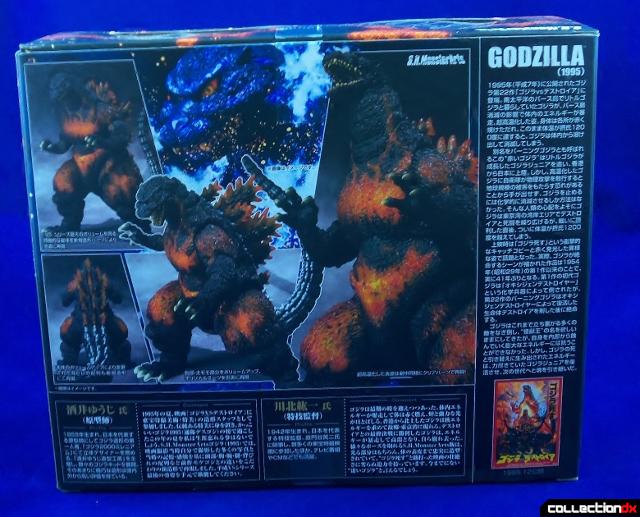 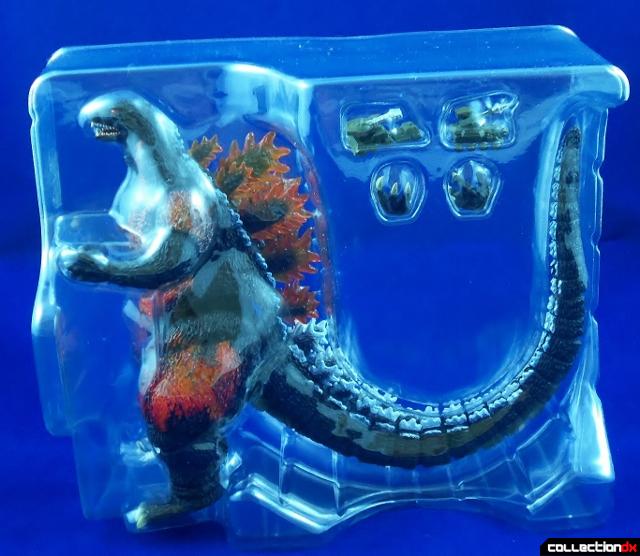 AJProDie-Cast: I agree it is absurd that a plastic tray and cardboard graphic laden box could even contain this eight inch representation of you, but it is a toy, give Bandai some slack.

AJProDie-Cast: I say! We at CDX gave you all the subway cars you could eat at the T and you get upset at a box... [shifts in seat restlessly]...okay, sorry can we move on.

AJProDie-Cast: You are the lord in manners and forgiveness, in addition to king of monsters. 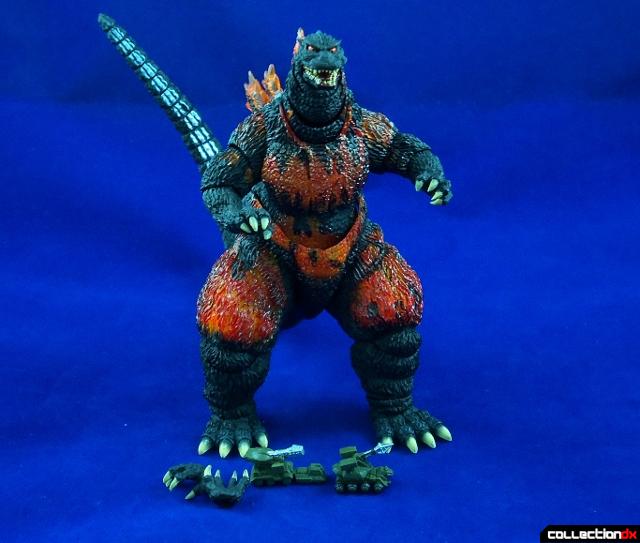 AJProDie-Cast: Yes, the extra claws are nice as are the two maser cannons, or "snacks" as you just called them. 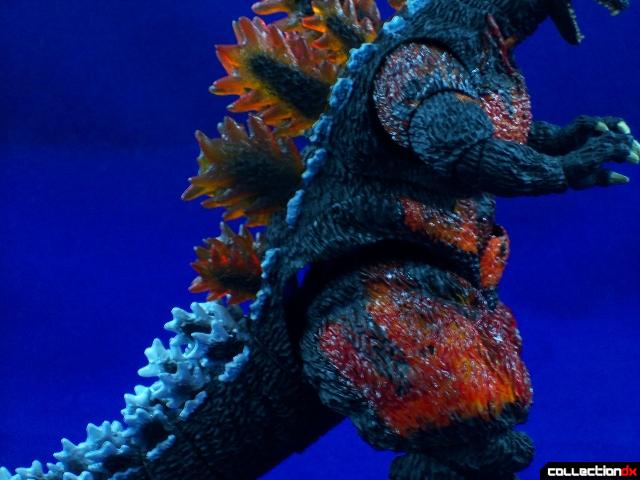 AJProDie-Cast: You are right, the red clear plastic on your back spikes show wonderful craftsmanship over simple paint. 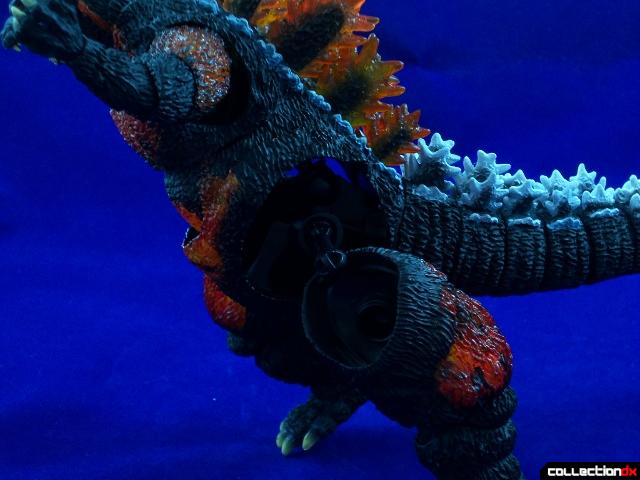 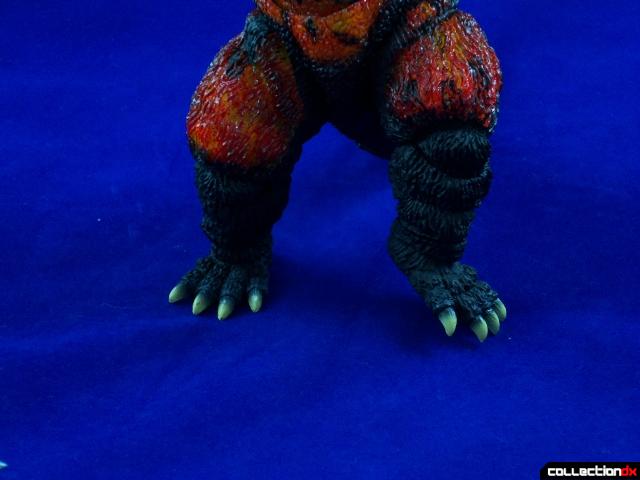 AJProDie-Cast: I will have to disagree with you [pauses], the awkward space in the hip area, and that a leg popped off easily, are easy to ignore because of how simply it snapped back in and that the spacing is necessary for posability. 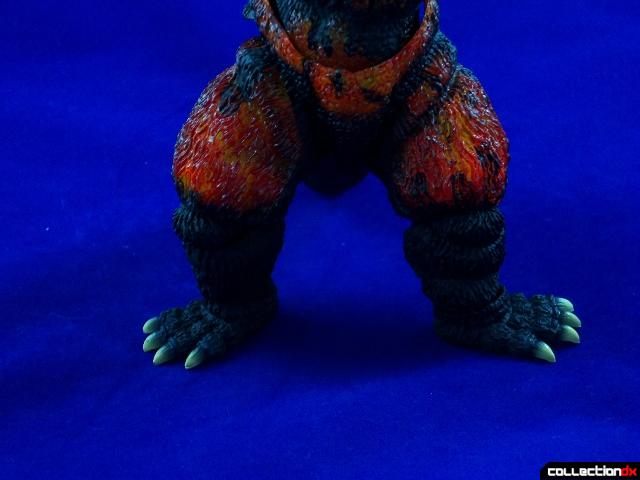 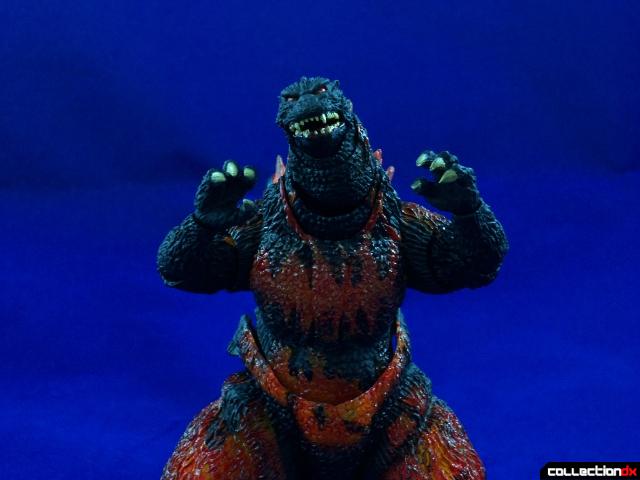 AJProDie-Cast: Yes, your feet are more fearsome in person and your arms have a better range of motion, [clears throat awkwardly] but for a toy they have a nice range of movement and the arms seem pretty accurate to me. Umm Godzilla, not to be rude sir, but you have someone in your teeth...

AJProDie-Cast: [yelling] Yes! I am edible...why I never! Let's just get back to the review... not edible, smells like robots and Tab... Indeed, sir! 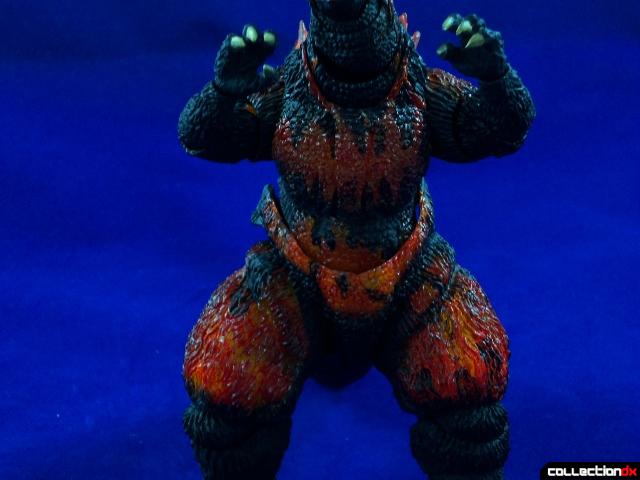 AJProDie-Cast: I agree that Bandai's refusal to use paint even on the body and to again have clear red plastic interwoven is going the extra mile, and I do agree your death scene in Godzilla vs. Destoroyah should have gotten you an Oscar. 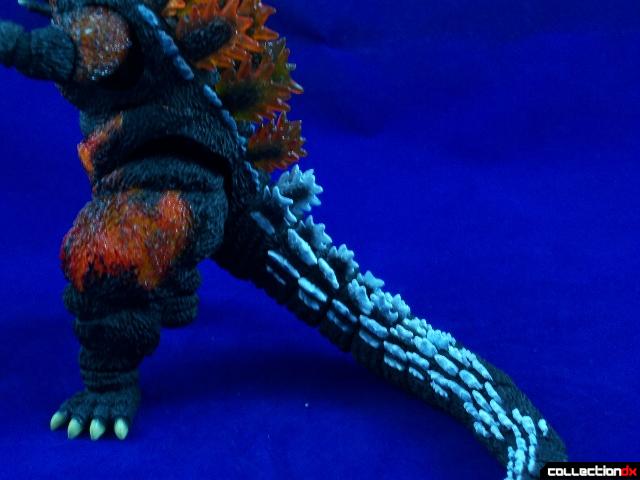 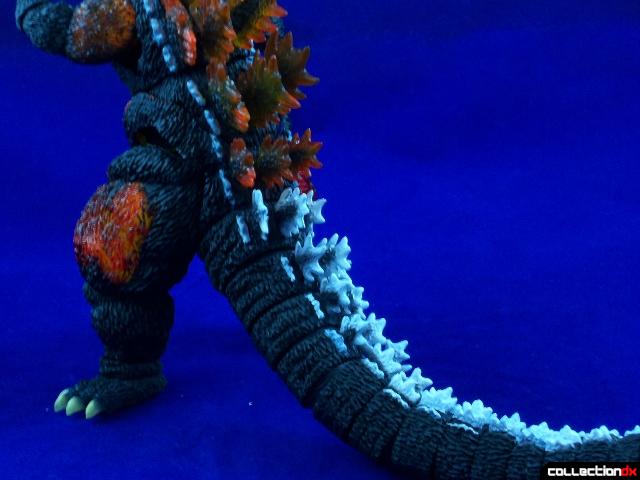 AJProDie-Cast: Again we will have to disagree, yes I can see your point that the tail is kind of awkward, but having all the pieces being able to spin and bend is the cause of the look and is needed for movement. 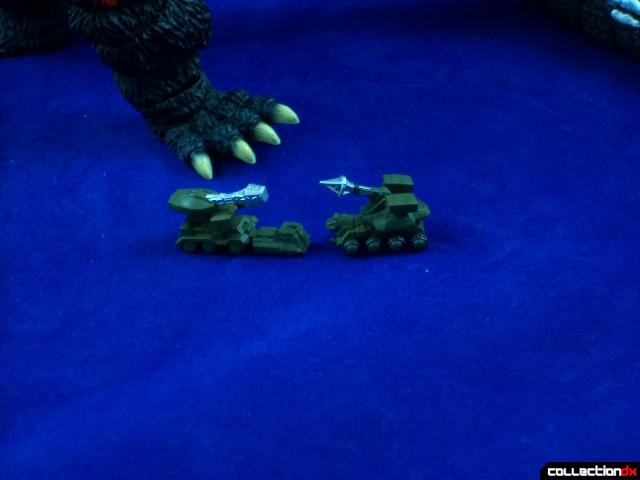 AJProDie-Cast: [laughs] Heh, I agree they are a joke but still a nice touch, and the turrets do move. 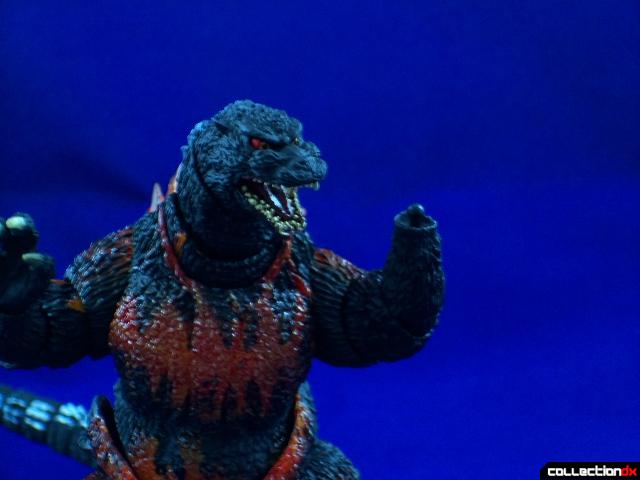 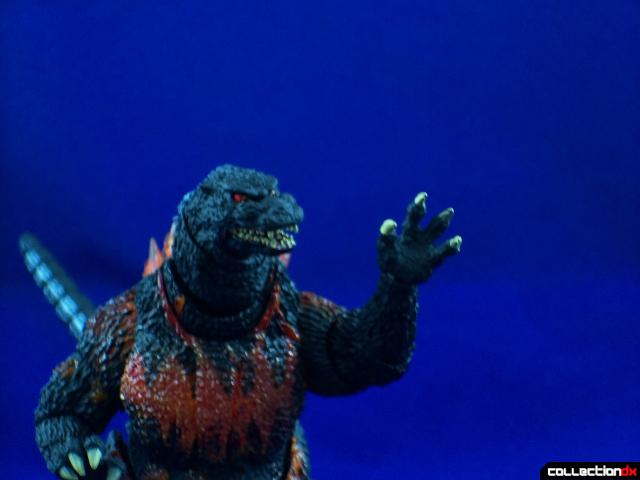 AJProDie-Cast: [nervously] Calm down sir, it is just a plastic hand being taken off... Mechagodzilla...please, sir, it is okay... even on the figure it goes back on. It always grows back on you.

AJProDie-Cast: It's okay, sir, it was just a movie stunt gone wrong. It's okay... back to the review?

AJProDie-Cast: Churchill would applaud those words. Let's get back to the figure. 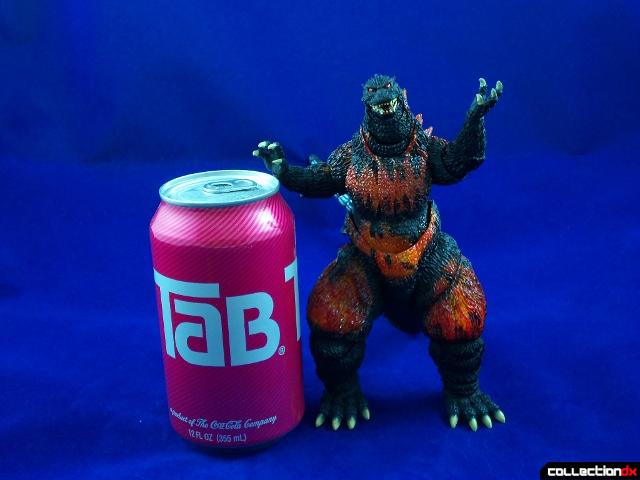 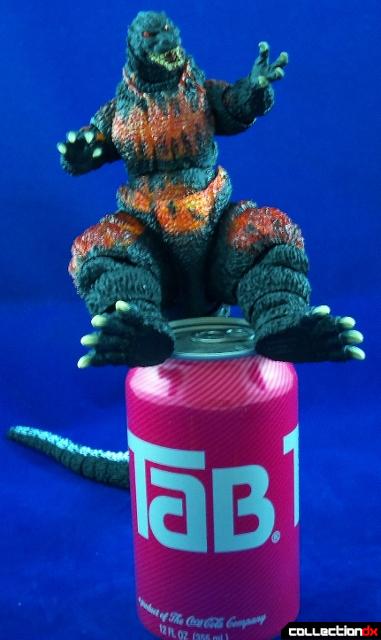 AJProDie-Cast: [quizzically] Yes the Tab is a nice size gauge. Wow, you used to love trucks of Pepsi Light in the 70's. Even the trucks were powder blue with the little lemon wedge... I miss that stuff too. 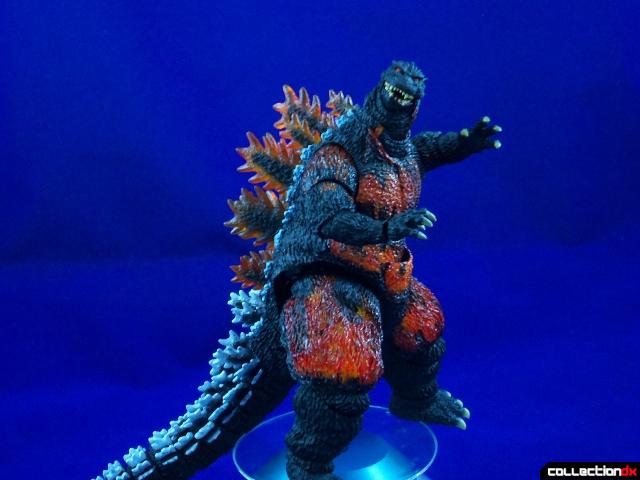 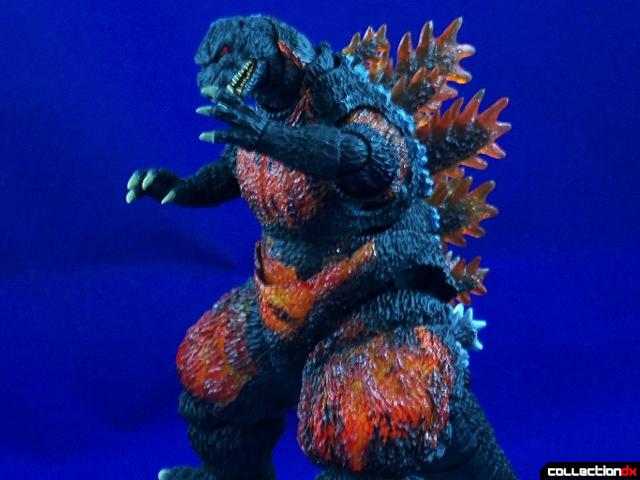 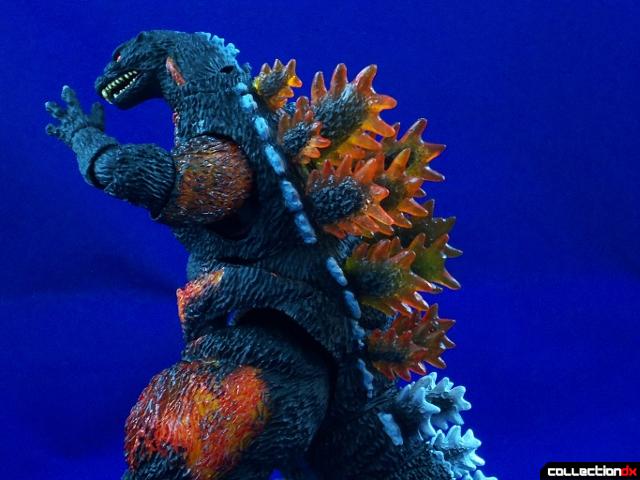 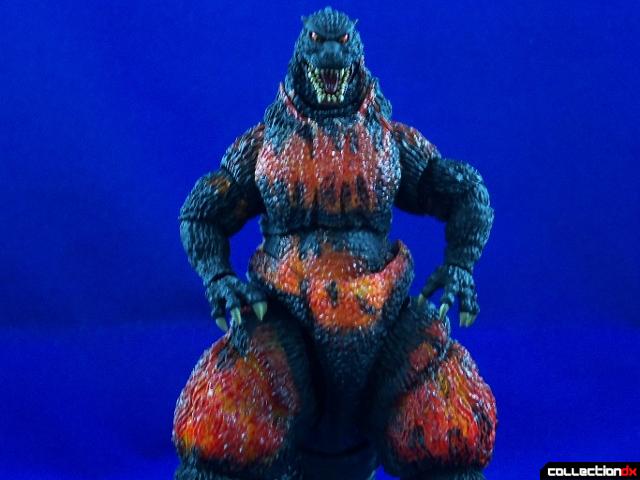 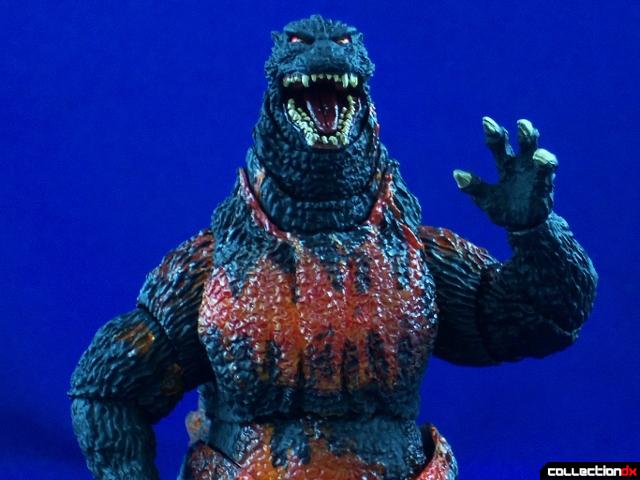 AJProDie-Cast: Total agreement, a nice figure for around ninety dollars at BIgBadToyStore. Yes, from the posable body to the twisting tail and the jaws that open and close, Bandai did a great job.

AJProDie-Cast: Anything you would like to say to your fans before you return to Monster island?

AJProDie-Cast: [laughing] Yes, America should be brought to its knees and sunk into the ocean if it ever has Matthew Broderick fight you as a female reptile laying eggs again. The pleasure was all mine, sir. God speed and may all your adventures be happy ones.

How did you manage to sneak an interview despite G's hectic schedule?

he is a true class act, and fit me in between shootings or should I say smashing....