When I was a kid, one of my friends own a rather peculiar Transformer. He looked like Bumblebee but was a different toy altogether. We'd often referred to it as "Bumblejumper" or "Cliffbee" and for the longest time I had no idea what was up with this odd little Autobot. It turns out he was another of the Microchange vehicles that inexplicably ended up being sold in Cliffjumper packaging in American stores. Meanwhile in Brazil, the same figure was being sold by an official Transformers licensee named Estrela in variety of colors as "Sedan" and even had its own unique box art. This gave some credence to the theory that the Mini CAR Robo Familia 1500XG was going to be integrated into the toy line in the same manner Microchange toys were re-purposed as Bumblebee, Huffer, etc. In the years since then, the character was given the official name of "Bumper" as he appeared in a few of IDW's comics. I've sometimes mulled over owning a real G1 Bumper but as you would expect his odd release made him quite a rare and desirable piece among collectors. While I do have some fondness for that weird toy my friend had, the real deal always seemed out of my price range for something so tiny.

Recently a "third party" company called Impossible Toys created whole line of figures inspired by the Transformers Minicars. They made a whole slew of variants end even went above and beyond to include lil' old Bumper in the mix. Out of all the third party groups, Impossible Toys seemed to be the one few people really got behind as their catalog of products were not especially glamorous or particularly ambitious. What they lacked in vision they made up for in passion and a drive to go through with some rather quirky ideas. 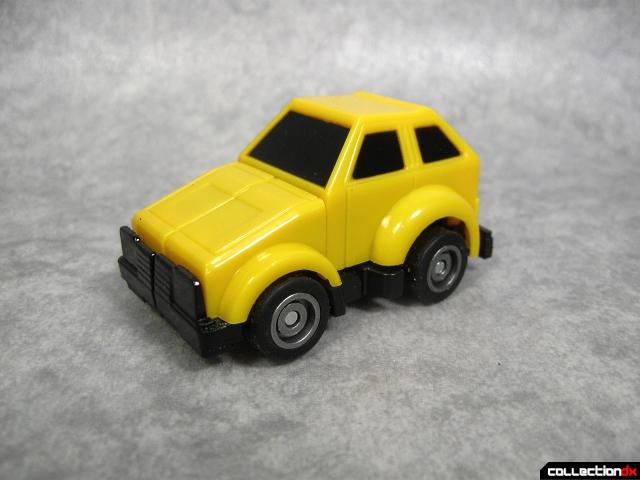 So this is Bump, the unofficial version of Generation One Bumper. In car mode he is about two and a half inches long. He has a full set of rubber tires and aside from the screws, is all plastic.

Like the official toy, Bump is a cute Penny Racer (Choro-Q) style version of a Mazda Familia 1500XG. Whereas Bumblebee was the iconic VW Bug and Cliffjumper was a rocking Porsche (in theory), Bumper was a completely mundane sedan. 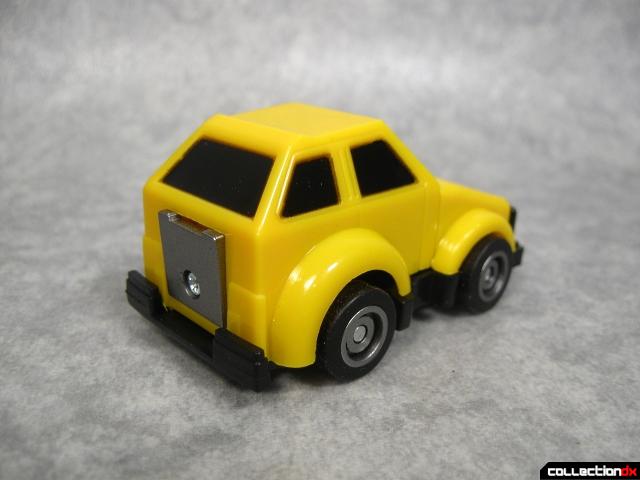 Bump's plastic quality is quite good and he feels at least up to part with an 80's Transformer. He is pretty glossy all over with the yellow parts having a bit of waxy finish. Normally a Minicar would have a sticker to cover up the unsightly screw on the back of the vehicle but Bump did not come with any decals. 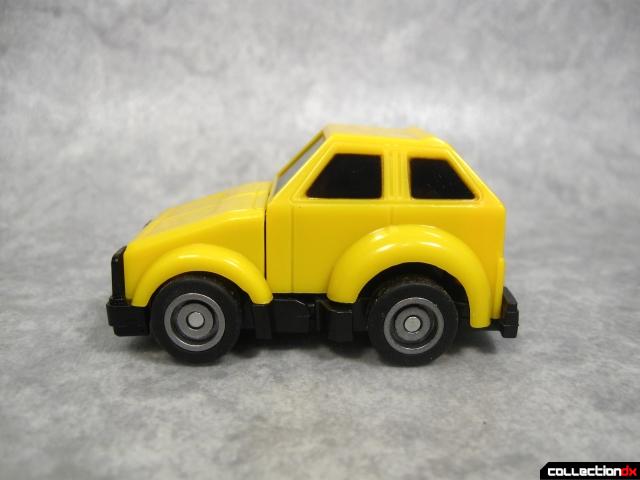 Those familiar with the G1 Minicars may have noticed Bump's proportions are slightly off from the genuine article. He's a little more elongated from the traditional SD car but still emphasizes the boxy lines of a mid-range 80's automobile. 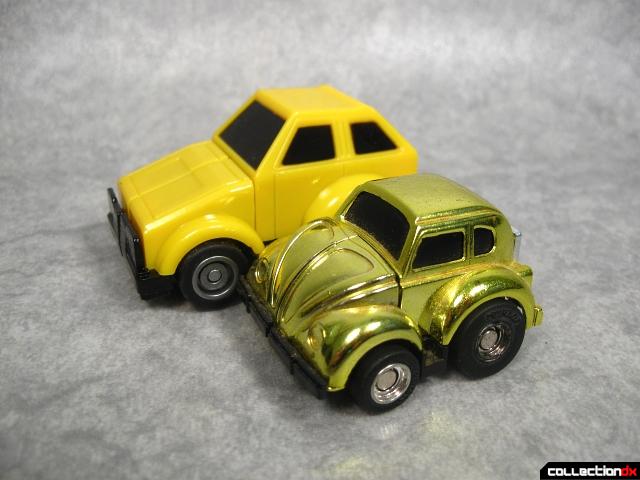 Here is Bump with Generation 2 Bumblebee. As you can see, Impossible Toys made their Minicars a bit bigger than the original Takara figure. This size increased combined with the retouched proportions are a sign there is more going on with this toy than meets the eye. 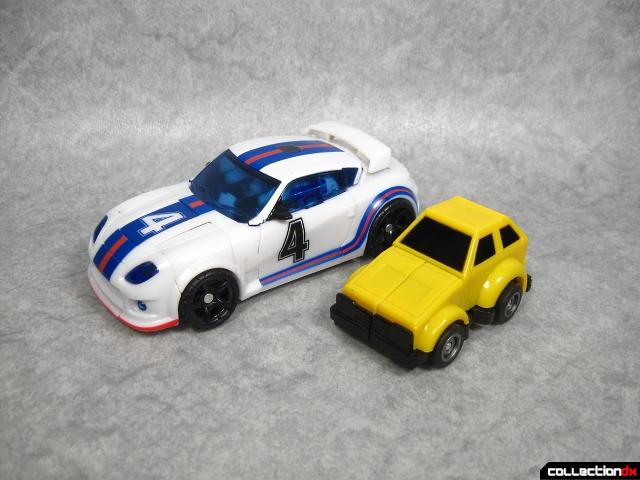 Bump looks alright next to more modern Transformers like Reveal the Shield Jazz, but the emphasis on retro styling makes him look a bit outdated by comparison. 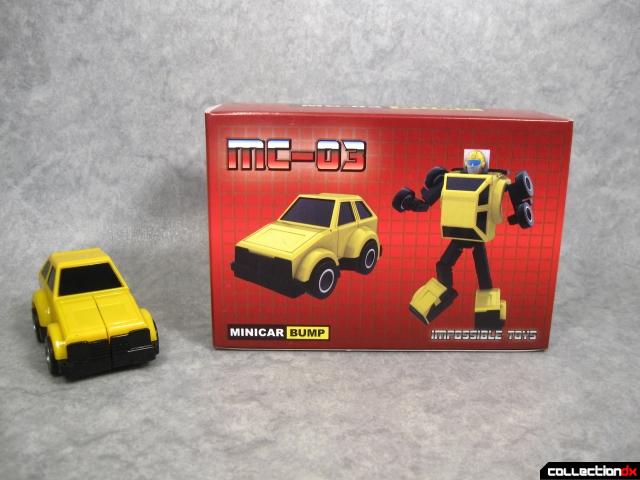 All of the Impossible Toys Minicars come packed in in a small plastic tray inside an equally small box. The art design for the packaging is aping the style of official Transformers boxes with the familiar grid pattern and even a Japanese style number of MC-03. For the record, Bumper was MC-04 when he was part of Microchange. 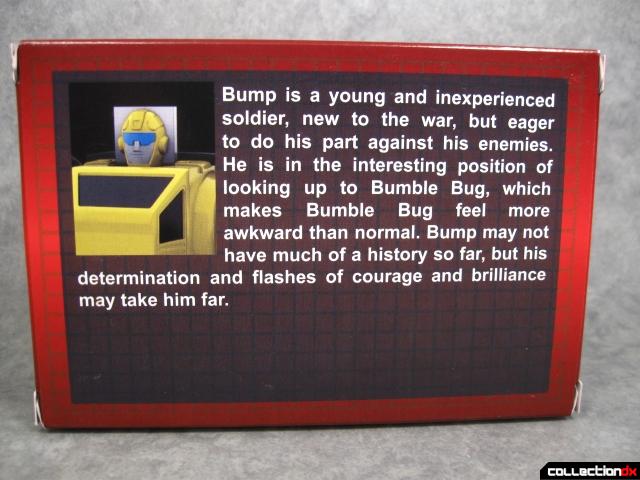 The back of the box has short bio for Bump. While many third party toys come with Tech Specs, some of them can be a bit "Engrish-y." Impossible Toys decided to up their game and make sure this text was well written by literally copying Bumper's entry on the TFWiki but replacing all the official names with their own. Oh that Bumble Bug, he's a wise one. 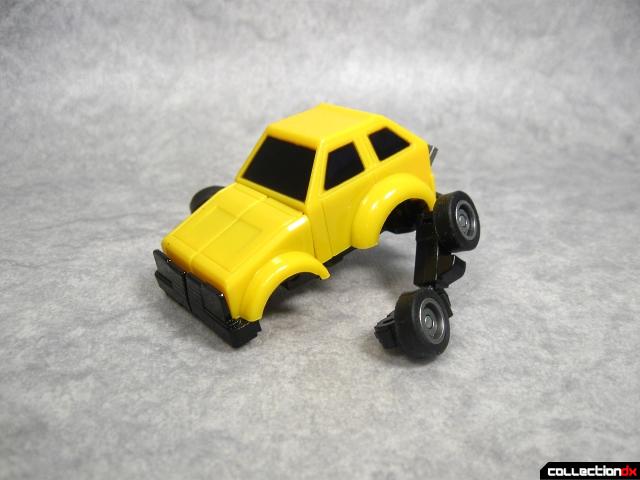 Bump's transformation is basically the same as the official one. You start by un-pegging his arms from his feet and swinging them out to the side and already you can see that Bump has a lot more articulation in his little pencil thin appendages. 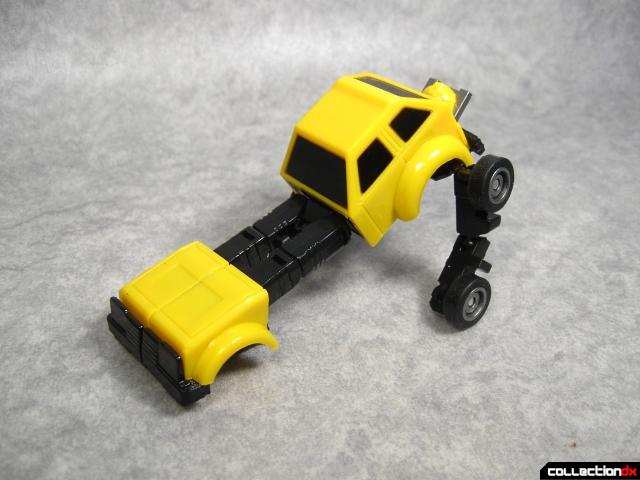 His feet and legs are then pulled out until his tiny waist clicks into place just below Bump's car belly. The head flips up from the rear of the vehicle and actually slides forward a bit to rest more towards the middle of his upper body. 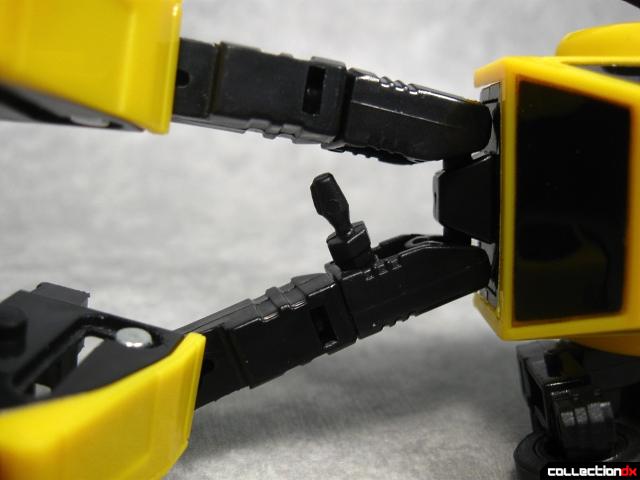 Along the way you can take his absolutely tiny laser pistol out from the hollow cavity in Bump's thighs. It took me a while to even figure out this is where the gun stores as none of these figures come with instructions. Instead, Impossible Toys would rather you squint at the low quality videos on their Youtube page as a guide.

The only tricky part to Bump's transformation is making sure his ankles travel all the way to the top of the small L-shaped track they move on. They should wedge into place and give the figure a stable pair of shoes to stand with. 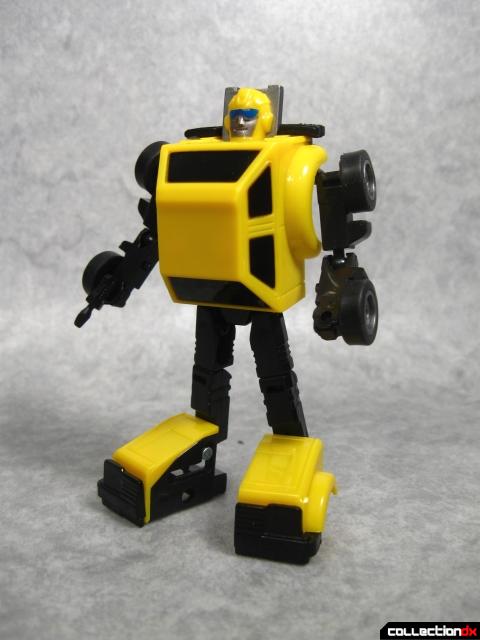 So this is Bump in robot mode. He's a little over four inches tall and is essentially a Generation One Minicar with more articulation. His bulky torso is mostly hollow so he stands up quite easily. 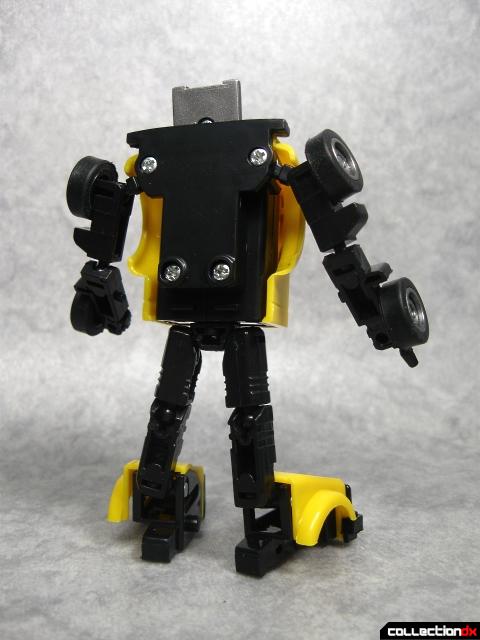 What you see is what you get with Bump. He lacks any kind of manufacturers mark or even a date stamp. 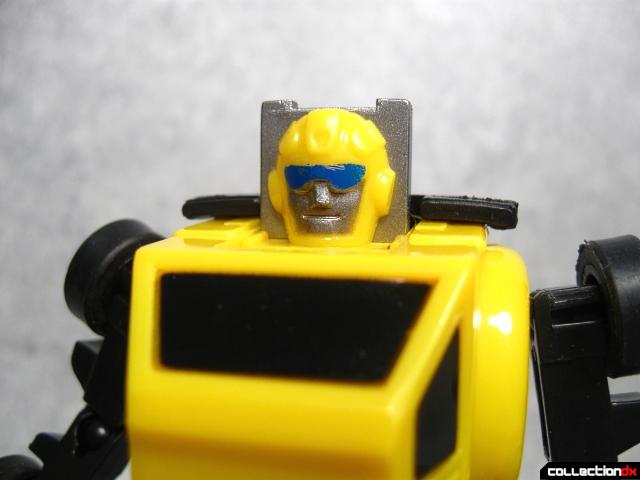 True to the source material, Bump is rocking a wicked panel head. The sculpt on his face is alright but unfortunately mine has some messy blue paint for his visor. Mild irritation aside, it's nothing that a steady hand and a little modeling skills couldn't fix. Due to how Bump's head slides forward a bit, there is enough clearance on the transformation joint to allow him to look upwards. 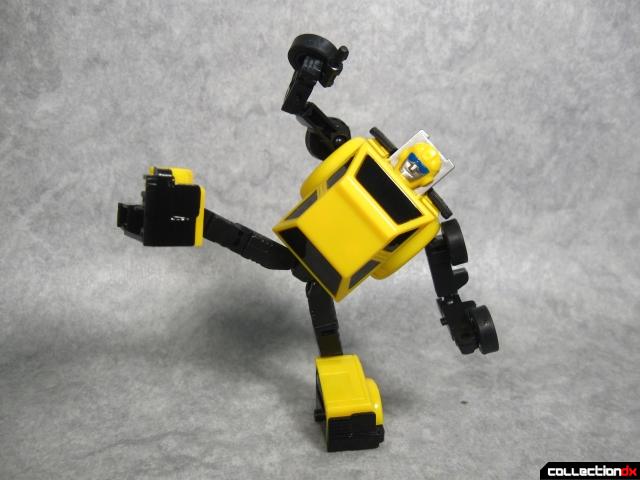 Bump is a pretty flexible little guy thanks to his numerous joints. Everything feels nice and tight making him a joy to pose. 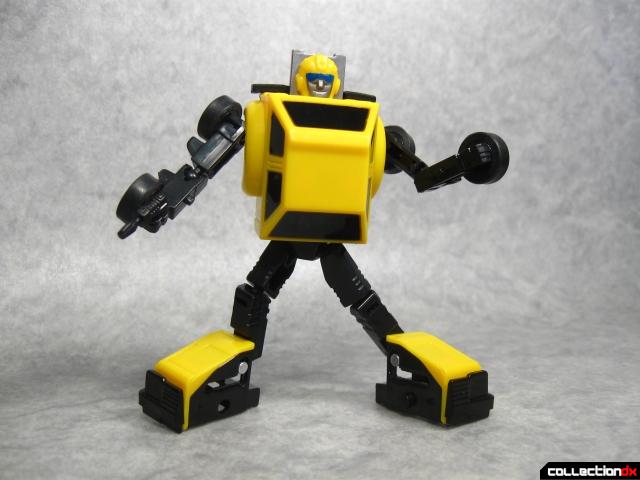 His arms and legs have ball-joints everywhere which gives this boxy guy a good range of motion. I especially like how far you can tilt Bump's ankles for wide legged poses and casual stances. 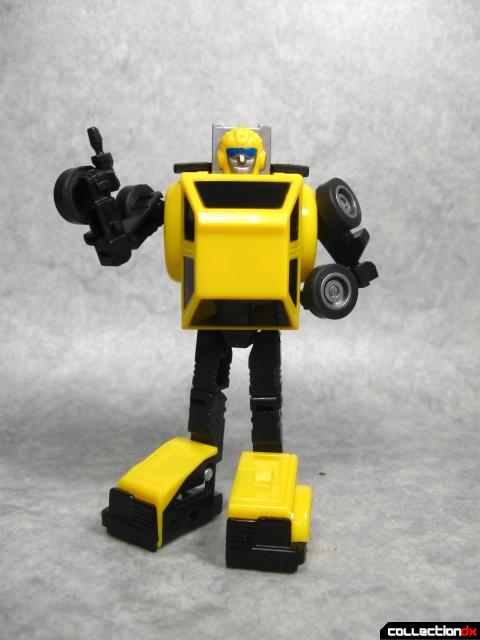 While he lacks a way of turning his head, the inclusion of a fully functional waist swivel means Bump can still act all sassy like a little robot car man should. 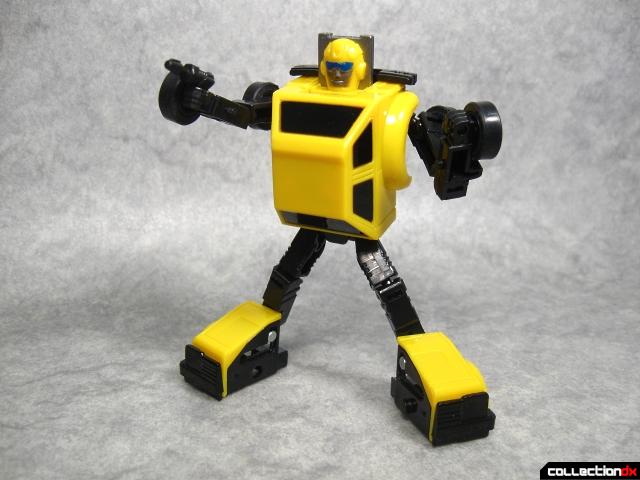 The itty bitty pistol gives Bump an appropriate level of coolness. It fits in either hand and is smaller than a piece of gum. 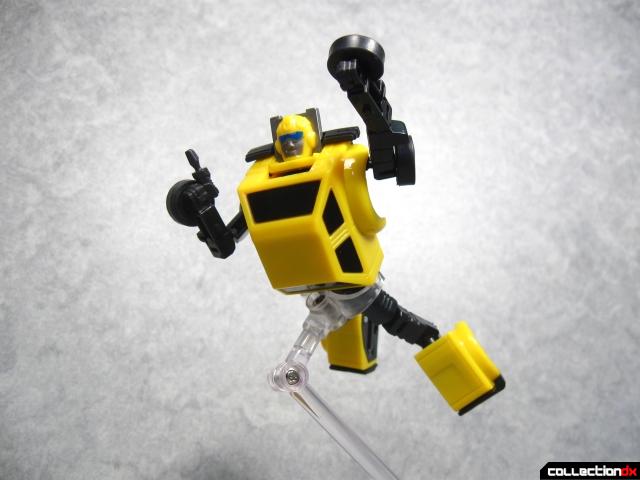 Bump can even pull off a "back of the box art" style flying pose. 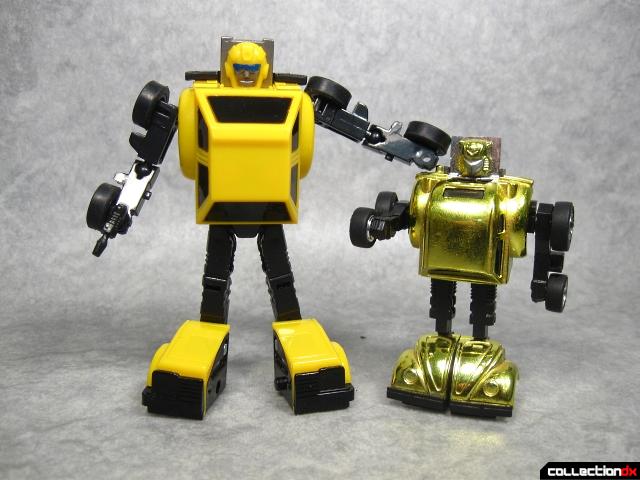 And here is Bump with G2 Bumblebee. Despite being essentially a copy of an official toy, Bump manages to one up geewun thanks to his ability to do more than wiggle his arms up and down. 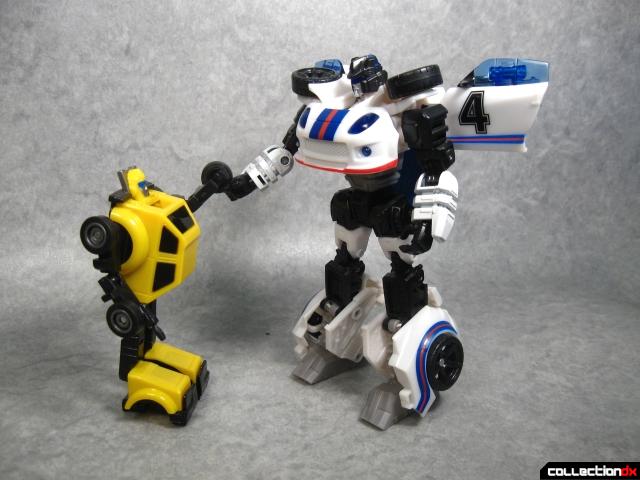 "You did good out there, kid. We'll see about making you an Autobot. Sadly we're fresh out of stickers so be patient for now. " 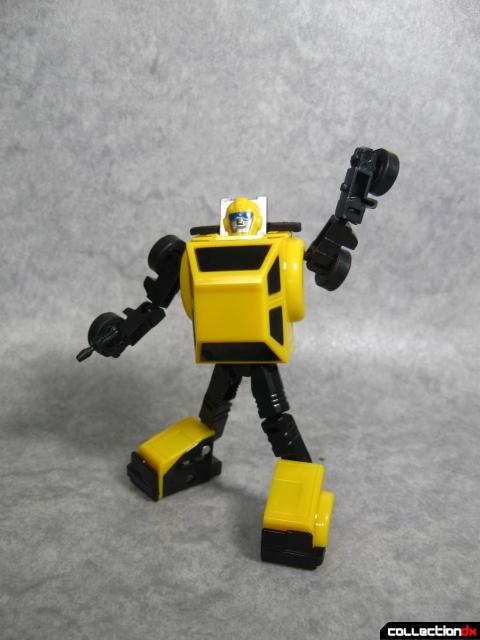 "Wahooo! Maybe one day I'll get a Reprolabel!"

The idea of "G1 but with more articulation" is a common thread when discussing just how to update classic Transformers. Many customizers have taken a hacksaw to old toys (genuine or bootleg) in an attempt to give poor bricks such as Protectobot Groove unheard luxuries like knees and ankles to varying degrees of success. In a world where third party companies are attempting to fill Transformer niches even I've never heard of, the idea of actually making a Generation One toy with more articulation was almost too strange for most fans. As I said before, Impossible Toys are nothing if not passionate for weird projects and this is one that produced good results. Sadly these Minicars with their slavish G1 styling and straightforward engineering did not impress customers enough to justify their $29.99 MSRP. Admittedly I was also turned off at that price but was willing to wait it out until they went on sale. A lot of sellers are getting ride of these guys for much less than their asking price. If you're someone like me who thinks this is kind of a neat take on Transformers then I would definitely recommend at least one of Impossible Toy's Minicars. Bump here is a lot of fun and charming even if he doesn't aspire to being anything other than an 80's toy with more points of articulation.

You have to STOP DOING THAT.