So let’s start with my biggest gripe right off the top. Paint Application and Paint Quality. I have only transformed the toy about a dozen times and if you look carefully at the picture below you can see the black paint is already come off, particularly wherever you have to “handle” it during transformation. Combine that with the generally shabby paint application to begin with and you have a pretty sloppy toy. 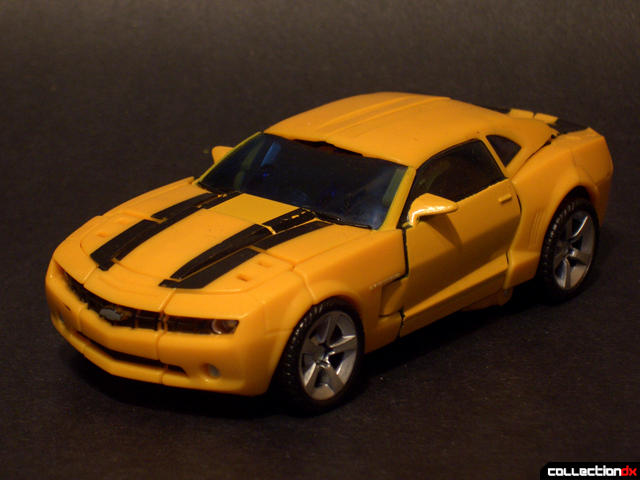 As a transformer it’s decent. Transformation is fairly intuitive and straightforward and looks good in both robot and car mode. 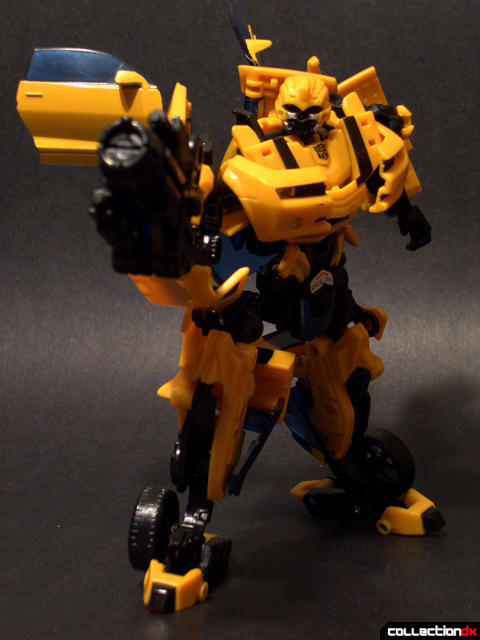 Unlike other Transformers from the movie I have gotten this year, there are a lot of parts and pieces that can easily pop off which I think really kills this as a “toy”. His lower half pops off easily and the yellow pieces of detail on his shoulders fall of during Transformation. In general, it’s a mass of fiddle bits. 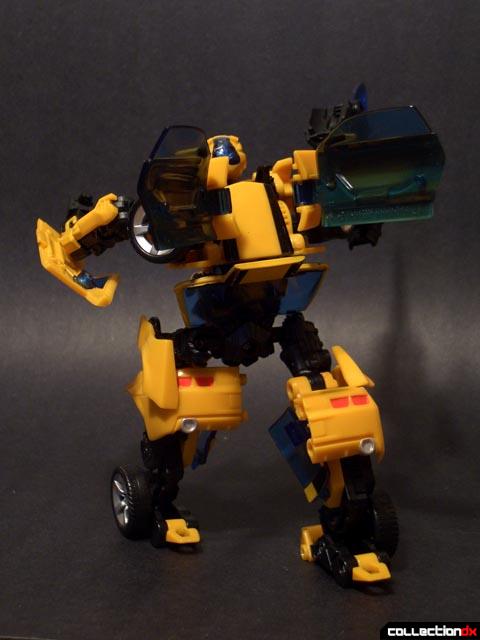 Like I said he looks good in both modes, poses well and comes with a gun that “looks” much like his morphed cannon arm from the movies. The gun can be stored in the underside of Bumblebee and can be converted to a blade. A nice touch. 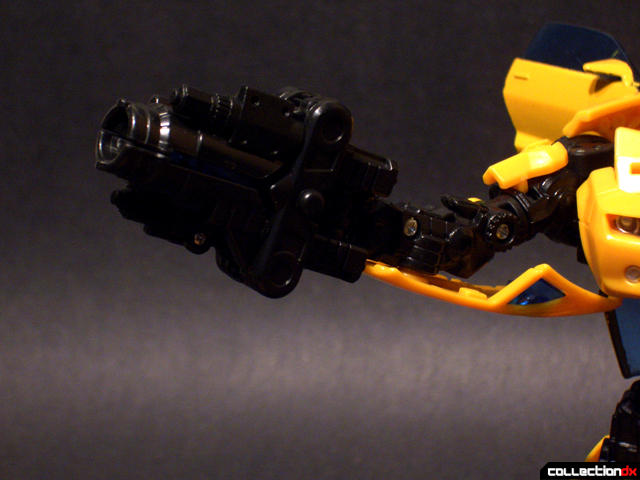 So as you can see it’s a real mixed bag. If you can get it for retail on the shelves it’s worth looking at (just check the paint detail), but DO NOT pay the outrageous aftermarket prices for it, it is so not worth it. 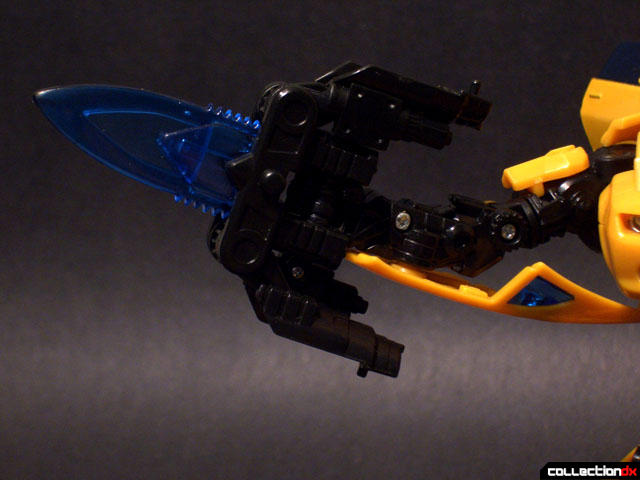 I did shoot video but it came out a bit blurry. Being as unimpressed with this as I was I am too uninspired to re-shoot it; I’ve included it so you can see the fiddly bits. 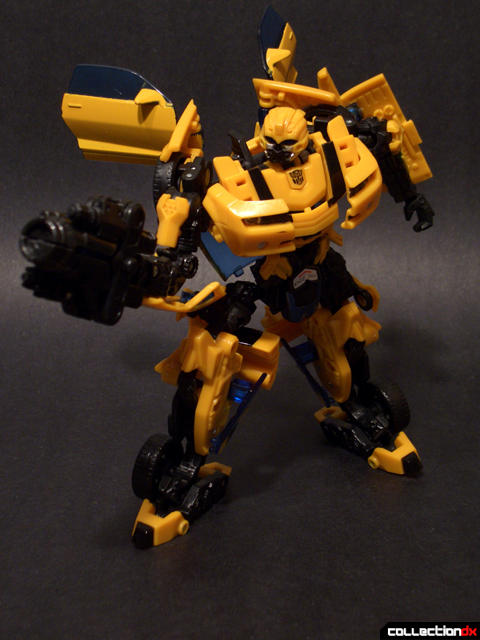 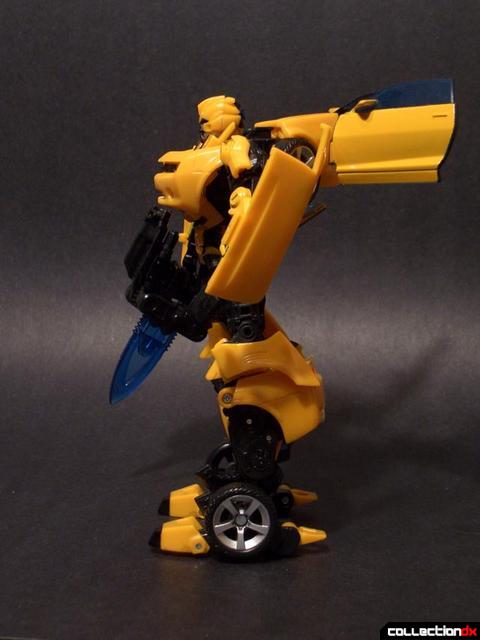 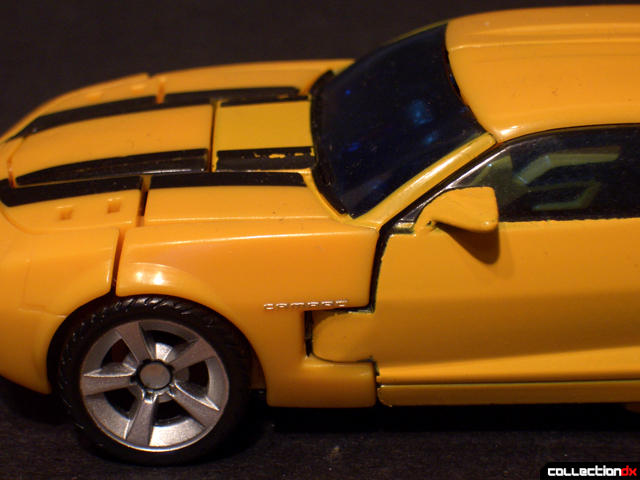 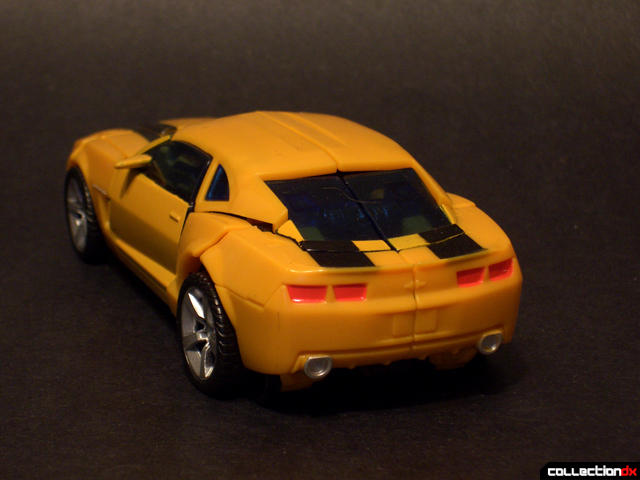 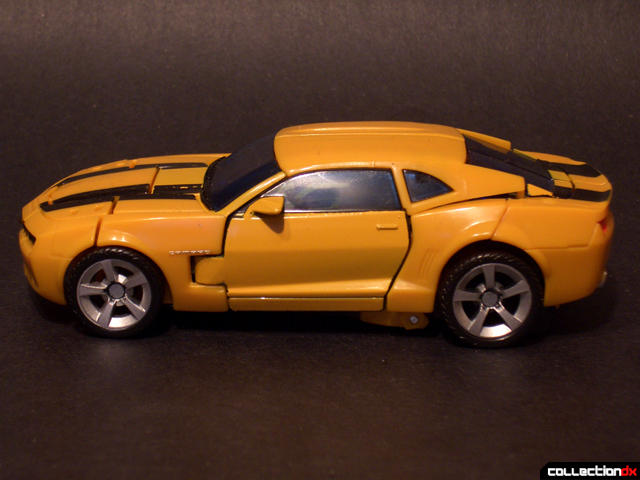 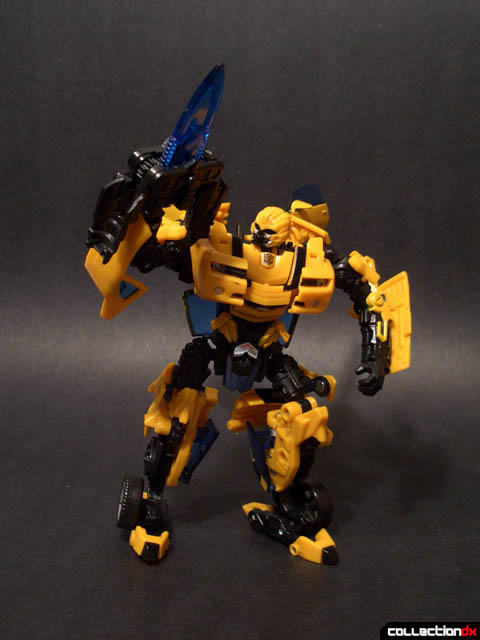 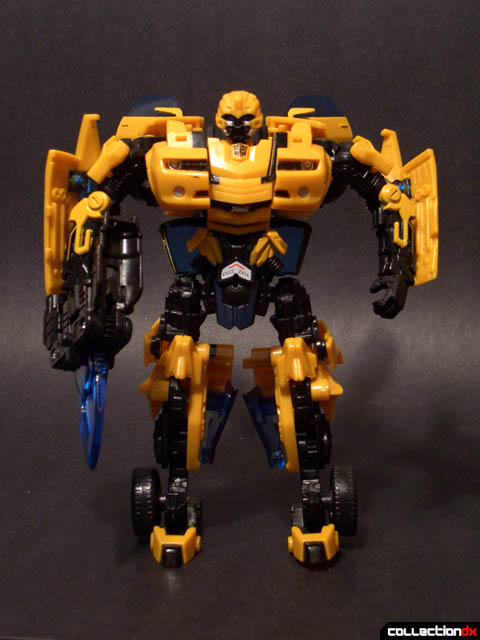 ...even after his little upgrade in the movie. ;D

I'm hoping that when the Battle Scenes-series Capture of Bumblebee set comes out, these few flaws will have been sorted out. I'm gonna wait for that one to come out because he has more film-accurate colors- mainly silver/gray plastic instead of black for the robot parts. (And- hopefully- I'll be the one to review it on CDX for y'all, too!)

One thing I noticed about your review, Atom, was that you mention how his waist comes apart. This may actually be a gimmick, though not as you'd imagine. In the film, as we all know, BB's legs get crushed beneath a building after Starscream shoots at him and Ironhide in the opening moves of the Mission City battle. While the Concept Camaro ver. here might not be able to have his legs taken off below the knees, perhaps Hasbro decided to just have his entire lower torso taken off instead.

I mention this because in the upcoming Final Stand set (which I'm also waiting to get), Autobot Longarm is paired-up with Concept BB here, but again in his gray/silver ABS coloring. This set was made because in the film, after BB has his legs crushed, Mikaela Banes runs over to a tow truck and hot wires it so that she and Sam Witwicky can 'drag' BB out of the battle zone. Now, in case you haven't noticed, the toy of Longarm looks exactly like that tow trick, even down to the "Mike's Towing" logo on the sides! So with this Final Battle set, you can have [Longarm] tow a halved Concept BB, just like in the movie!

I mentioned earlier that the Concept BB's waist connection might be because it was used in a special two-pack set. Seems I was wrong about that part. BigBadToyStore.com is selling all four of the Screen Battle sets: