When the first figures for Transformers: The Last Knight were revealed, I have to admit I was skeptical. The $5 price increase made deluxes a little too much, and the paint certainly isn't there to justify it. Despite that, I got two of these deluxes to satisfy my curiosity.

Wave one's Bumblebee is just a repainted of the Age of Extinction deluxe, and while I was a big fan of that figure, I'd be hard pressed to say that this new version is any "better" than the previous one.

Vehicle mode is, to me, hands down superior to the AoE one. The yellow plastic is all the same shade this time, and the yellow paint is a lot closer. The Vehicle itself is actually painted very well, with its black trim completely intact, and the tail lights actually painted red this time. The transformation still means that this mode is hard to line up perfectly, but that's only a slight issue in what is otherwise a really good alt mode. 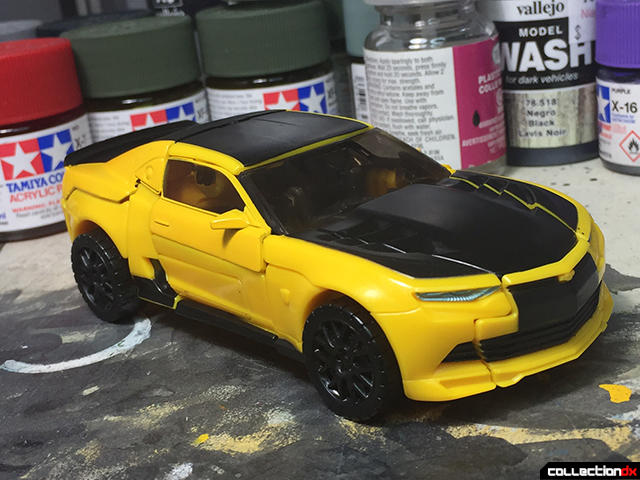 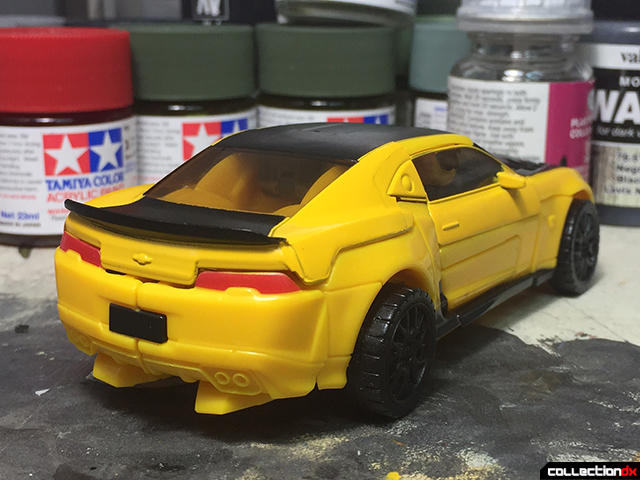 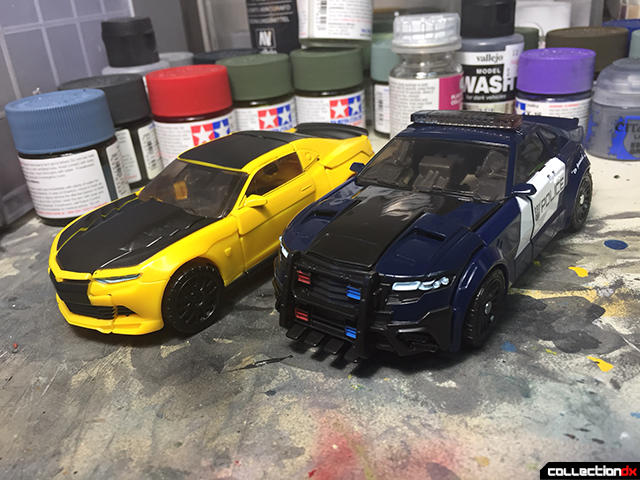 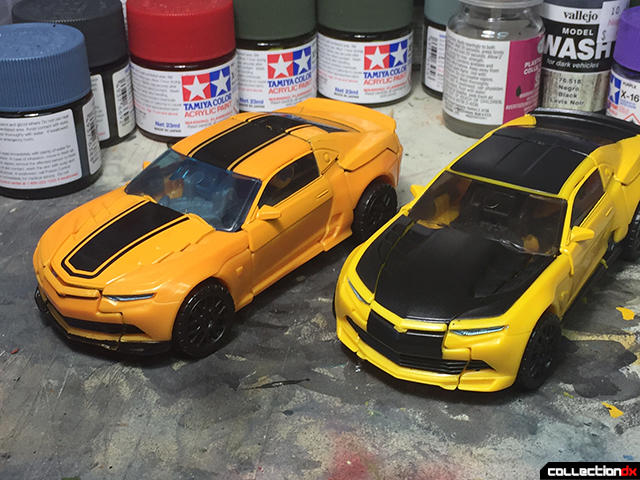 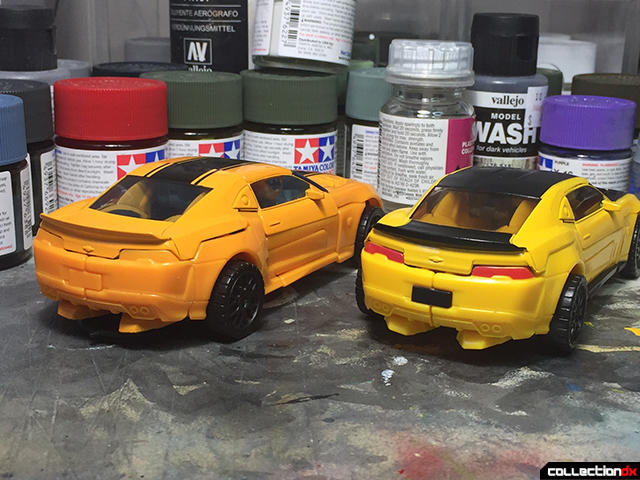 The Transformation is really unlike most movie Bumblebee figures, as it ditches the common hood chest and door wing design of previous molds. The top entire top of the vehicle mode compresses into an impressive backpack, and the legs just unfold from the back of the alt mode, and visually clean themselves up. The arms are a similar story, as they basically just fold out and make some minor cosmetic changes for their conversion. Finally, is the body, done with the concise but very well thought out action of just opening the robot chest, and tightly folding in the front of the vehicle.

Bumblebee's robot mode looks lean and dynamic even from an idle pose, but is really lacking paint in a pretty obvious way. The arms and legs are basically left yellow and gray aside from the paint they receive for the vehicle mode, making it looks a little cheap and boring. Especially when you compare it to the original figure as, although the paint on my figure scratched off very easily, at least it never looks cheap. The color layout this Bumblebee does have still looks cool, but it's just a little boring and lacking. Articulation is pretty average for a deluxe, with some extra ankle articulation left over from the transformation being the only new addition. It being the same definitely doesn't make it bad however, as you can still pull off some cool poses. 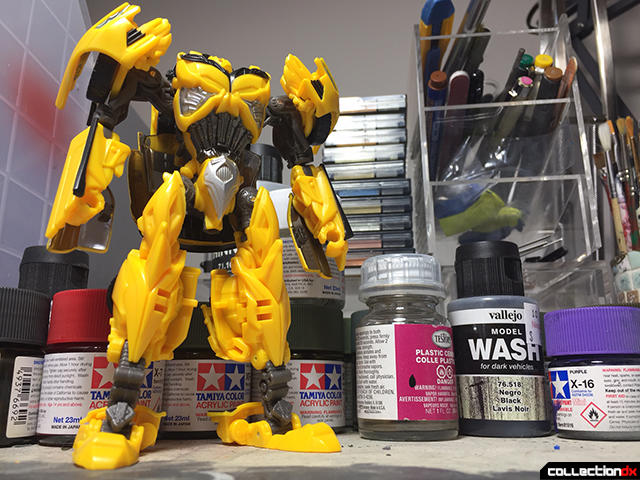 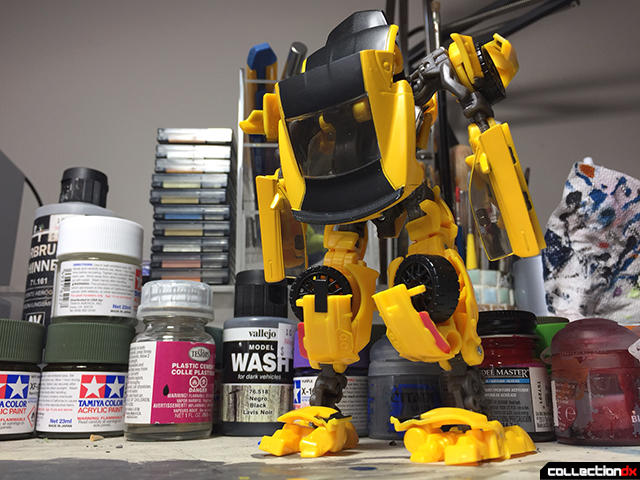 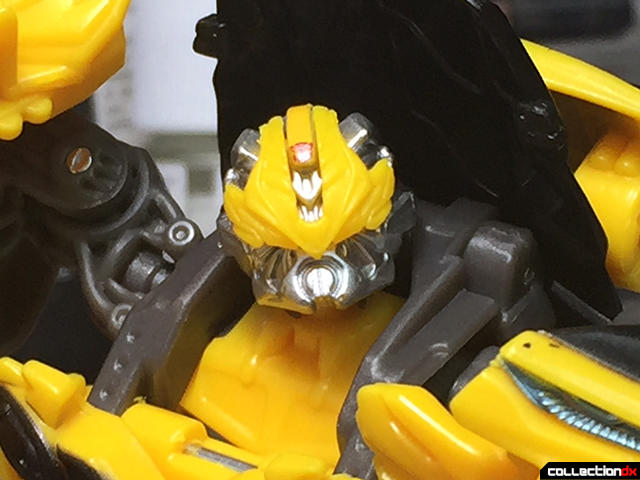 Speaking of poses, Bumblebee comes with two saw blade like weapons that look cool and menacing in his hands, but I don't really know how he would use them. They can store on the backpack pretty well and unobtrusively though, which is good. The main and possibly the best feature, is Bumblebee's arm cannon. It can fold out of his right hand, and looks great! It's a very well done unobtrusive gimmick that looks good in the process. 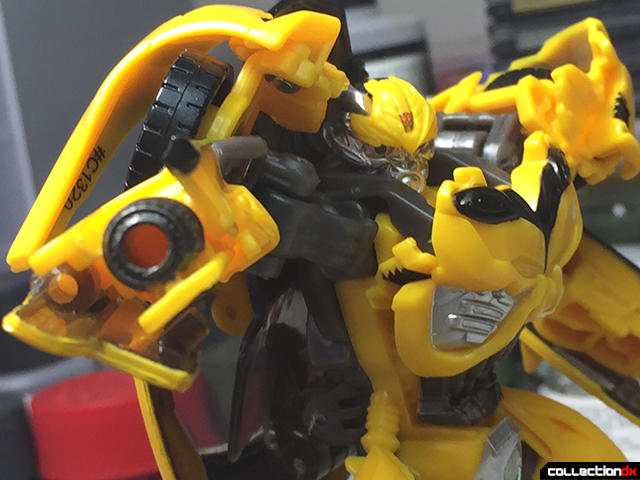 Size is interesting for Bumblebee when compared with his rival barricade as, the former is actually quite a bit taller than his Decepticon rival. 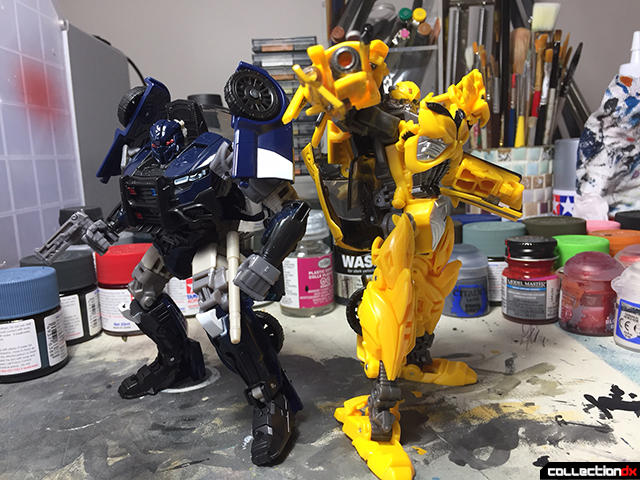 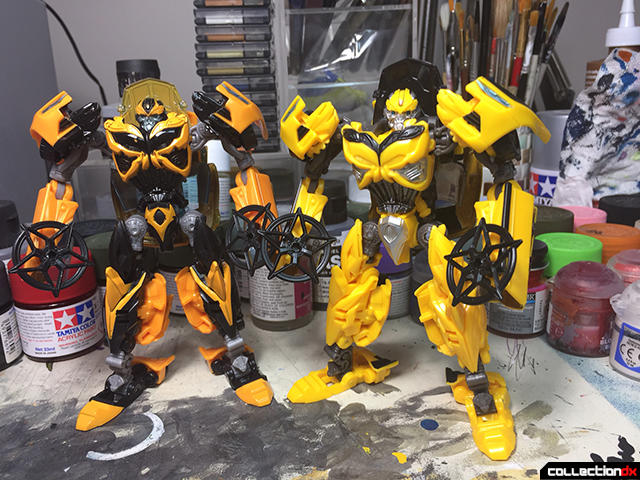 In conclusion, Transformers: the Last Knight Bumblebee is a figure that no one really needed, but because its here, you could find yourself in possession of it for it's matching shade of yellow this time, awesome vehicle mode, or if you just missed out on the original. It really looks great and terrible at the same time, but if you like what you see, and that arm cannon gimmick speaks to you, Bumblebee is really a harmless purchase.

Wow. So the movie's already come and gone, but what they release first is a "Premiere" repaint of his AOE figure instead of the all-new one. Like you said, he does look good from certain angles. But from others, all the solid yellow screams monotony.

For what it's worth, I give the nod to Barricade. At least he's a new toy.

I can't believe they have the balls to charge 20 bucks for these things.

I know! I can't believe that something that looks so hit or miss as this Bumblebee is almost as much as a voyager class figure. I thought about that recently, that instead of getting this, I could've gotten Octane or Blitzwing or last knight megatron or something!

Oh I just read the review, and I made a mistake!!! I forgot to say "this figure is a harmless purchase if you can find it on sale!" Sorry about that!