Transformers Cybertron is one of these series where the gimmick decides the destiny, and as a result the toys released in this line are either great and interesting or bad and illogical from a fan's point of view. The gimmick of the year, the Cyber Key Power that fuels Cybertron, is more often a misued concept than a nice expansion of the toy's functionality. Though I have a feeling Breakdown has more to worry about than just a mis-designed selling point. 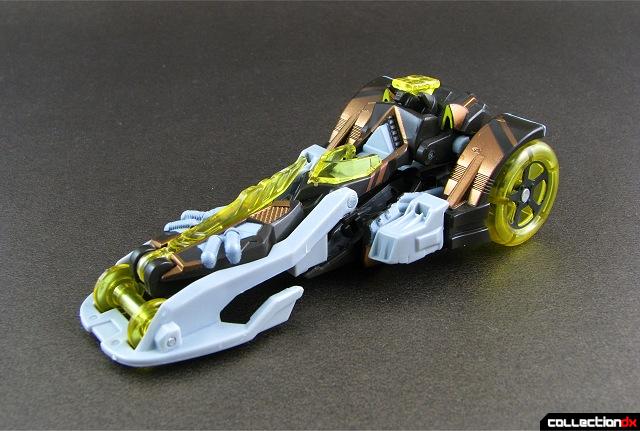 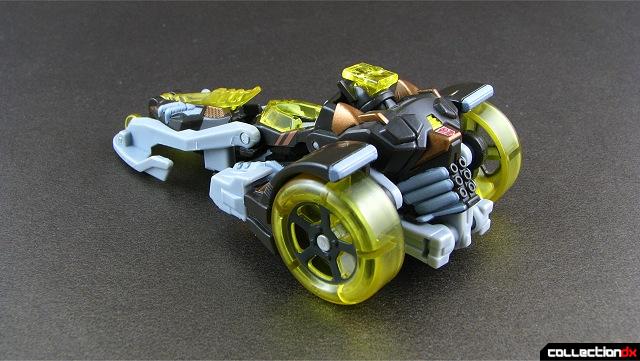 Behold his vehicle form which is... is... um, that's actually a good point to ask about. Ok, From the beginning, then.

Breakdown is a resident of the Speed Planet in-story, which means his vehicle must be some sort of a fast ride optimised for endless races and highway cruises. And you can easily tell he belongs to his bunch because he has translucent (and yellow at that) wheels that are the trademark of this planet. Though beyond that... it kind of looks like an ancient Rome chariot that had its horses replaced with an engine block and massive spin tracks by Xzibit and West Coast Customs. This kind of makes sense if you actually watched the show and learned that Breakdown is the oldest citizen of his state.

Still, if you are a parent / person uninvolved in Transformers or toys in general, chances are the first mental connection will involve a Tron ripoff at best. And as you get away from the toy, identification gets harder and harder... so yes, not the best of the alt modes out there in terms of instant visual recognition. And in hiding the robot legs on the back. The top half of the thighs is really noticeable, and distracting us with this nice exhaust six-pack does not help one bit. 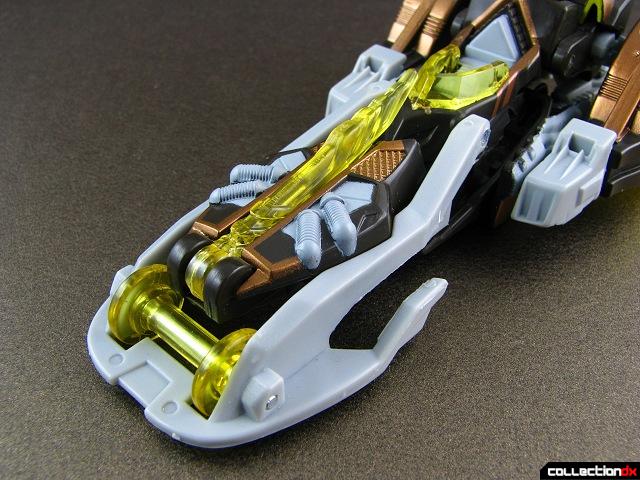 Let's take a closer look at the front. It kind of looks like some sort of bottle cap opener that was fused with a engine-like thingie and a string drum from a sewing kit. It's hard to tell whether this was made to look retro-futuristic or not.

I will admit though, two things I like about this vehicle: translucent yellow which looks fabulous and the paint application which is both subtle and effective at making this look more interesting than it might have been otherwise. 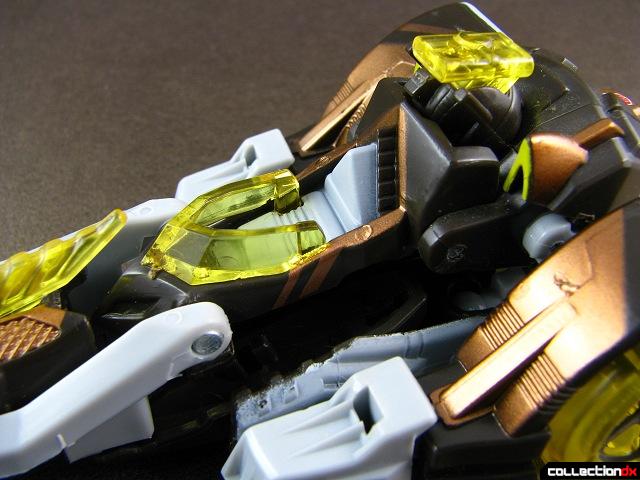 This I will never ever understand. Speed Planet is inhabited by sport-vehicle based robots. And only them, no other species on the planet whatsoever. And yet every single Transformer from this planet has a cockpit. Why? I have no idea. It's like they assume they will eventually meet aliens that will be small enough to fit in their alt modes and in need of a ride. I know this is still some 5 years before War For Cybertron fixes that, but it shows that either the designers did not dwell on this planet's robots too long, or that I'm too conservative to understand their vision.

Well, that or kids simply have see a cockpit on their toy to tell it's sports car-based. I need to check how's Fall Of Cybertron Jazz selling these days... 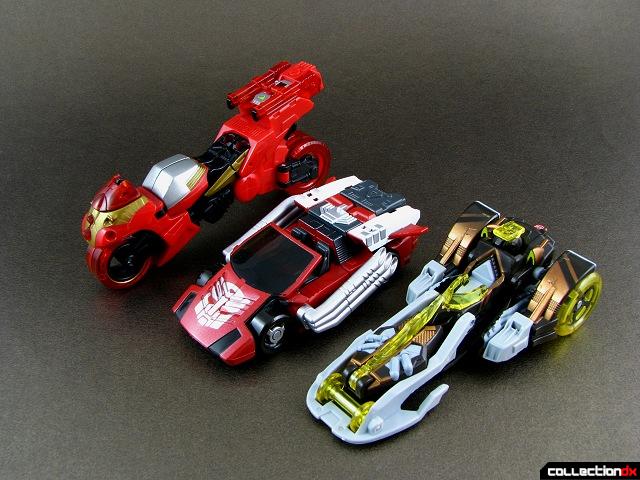 But enough of that, let's compare Breakdown with other Speed Planet dwellers. Here we have Ransack and Swerve. 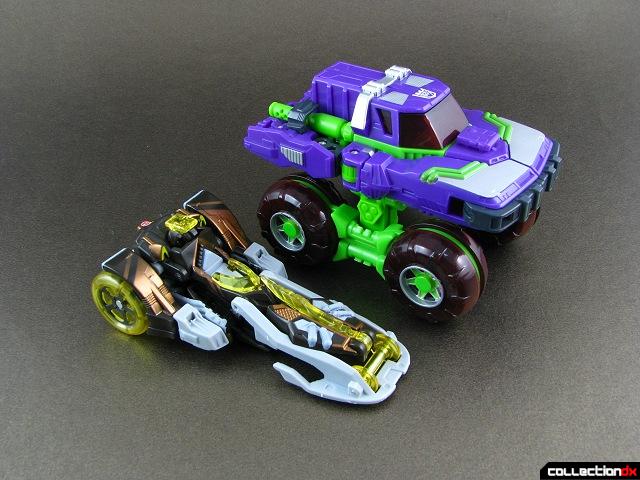 And just for the sake of Deluxe comparison, here is Dirt Boss.

With that, we can now depart for the robot mode. 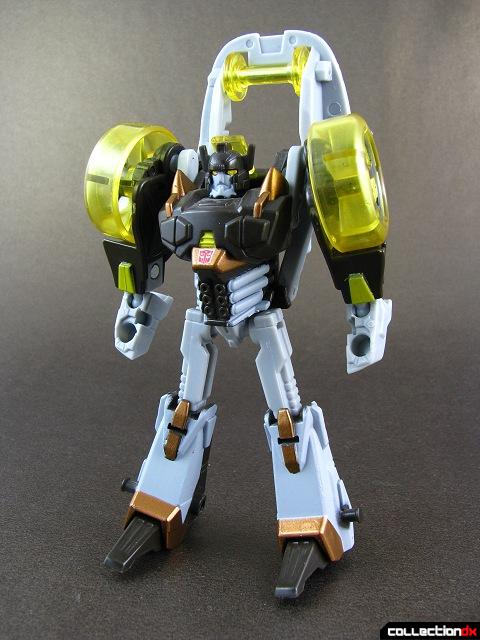 And the robot mode looks... quite nice actually. I really like the overall design of this. The shapes are all(most) nice and the colour scheme works. If there are two things I'd change, I'd remove the bottle opener from the back and make the forearms longer... these are forearms, right? 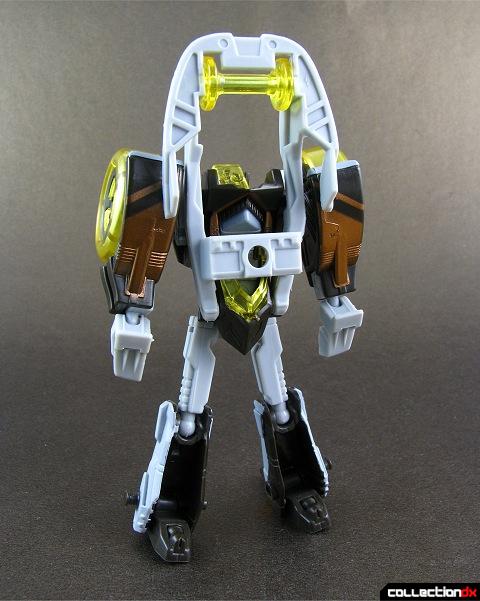 The back is like in the case of most Transformers... not designed to be looked at for longer periods of time. Especially the hollow legs. One thing of note though is how the toy is able to stand straight with such a big piece kibble on it's back. And that's the issue. Most of the time its not able at all. Making Breakdown stand and not fall over in the next second is very, very hard. It took me several minutes to find a weight centre that would allow him to remain vertical every time I needed it. The loose foot hinges that rotate back for the transformation add to this even more. This might be the single biggest value-killer of this toy. 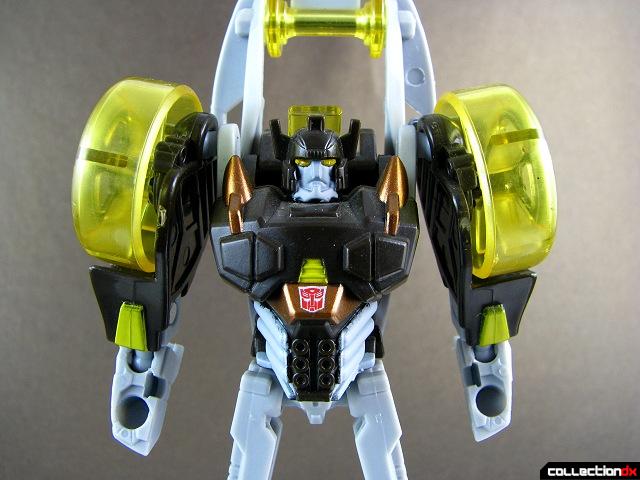 The torso and arm sections look nice for the most part. The main body is well-decorated by the belly made of the exhaust pipes, and the paint apps to do their part decently as well. The huge wheels on the arms are something fresh and eye-catching as well, though I will admit the presence of the wheel spin axle forced the designers to move the shoulder joint ridiculously high and it's visible even from here. Though that's not as bad as the factual lack of a forearm. Seriously, Hot Shot was close, but this just nails the problem all too well. There is the elbow, and immediately the hand rolls in. While this is somewhat dictated by the transformation, it looks very bad and out of place, making it the main aesthetic issue I have with the robot mode. 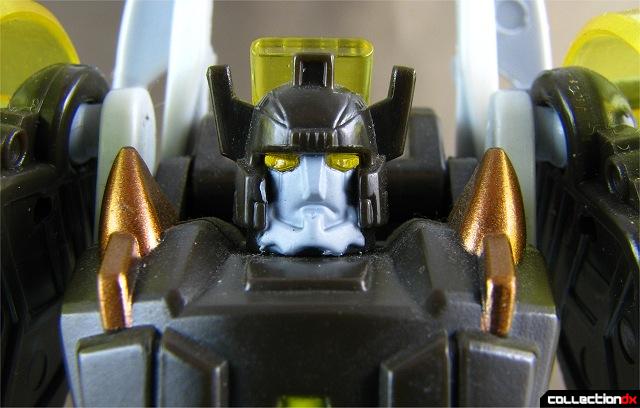 The head is a mixed bag. I can see they tried to make Breakdown look old by stylising his head casing after a sort of Roman centurion helmet (complete with a comb made from translucent yellow that does nothing to light up his eyes, which are merely painted yellow) and even giving him a beard. But the face breaks up the illusion, even with the vertical lines crossing the cheeks, he still looks quite young, a mechanical equivalent of mid thirties at best, and without the beard it would have had even less of an effect. 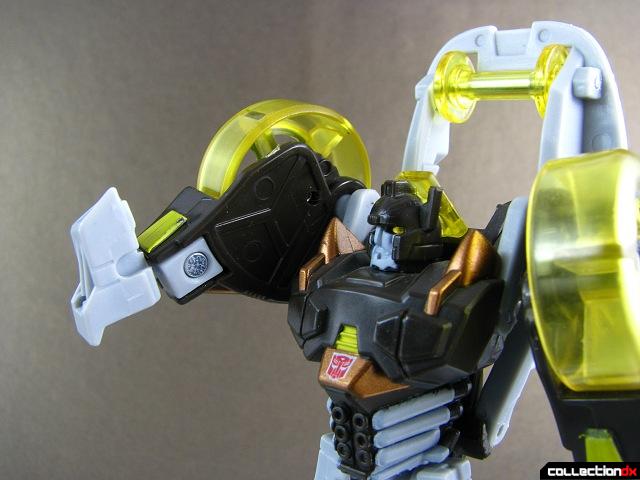 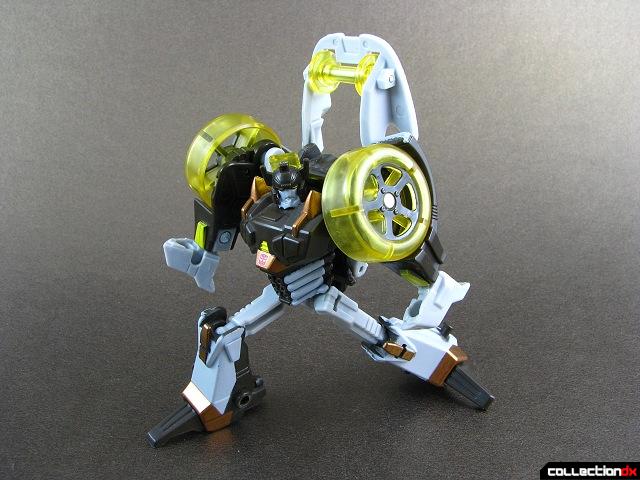 Time for the posing test... and it's not that good. The way his shoulder joints are built prevents the limbs from anything put poor side movement, and the length of his virtually non-existent forearms takes away most of Breakdown's upper body expressiveness. The stability issues on the other hand make it hard to use the ball joints on his legs... by the way, forget about full splits, the hips joints are made the same way as the shoulders, superfluously restraining our posing options. And no, it may look like he has a wait joint, but he does not. The back-mounted cockpit sits too close to his buttocks to allow even a shadow of horizontal rotation. 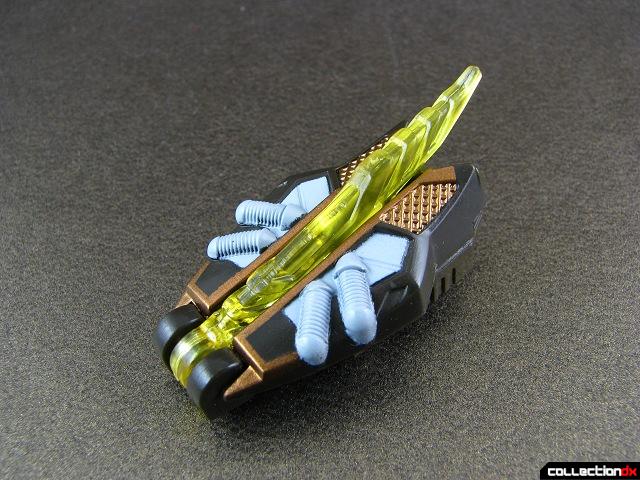 As you probably noticed, in robot mode, the engine block detaches from the bottle opener assembly and does nothing aside from looking nice for something with no clear purpose at the moment. However, we are about to change that. 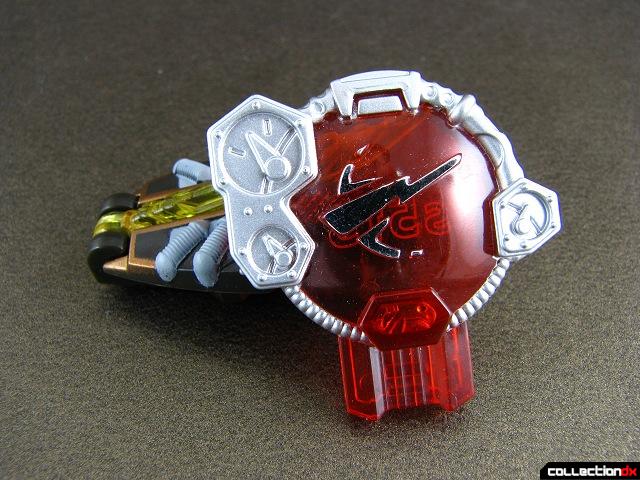 The agent of this change is the Speed Planet Cyber Key, which is a neat piece of translucent red plastic painted in silver and utilising a pinch of chrome coating. I admit, this is my favourite Key of them all, as it looks like someone draped it with a car's stolen dashboard, and the Planet emblem is nice without being too obvious for its setting. This might be a thunder, or part of a car speedometer. I like. 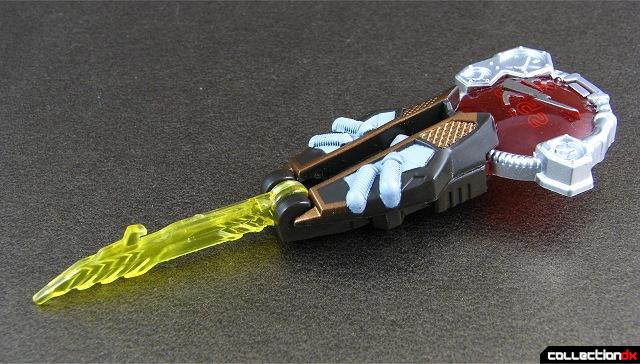 And when we plug it into the slot on the engine block, it turns into a sword, I think. And while I can appreciate the material used for the blade, as soon as the weapon is deployed I realize it's Breakdown's ONLY weapon. This is one of my main problems with the Cyber Key gimmick. For some toys, especially Scouts, their only armament can be accessed through the key, leaving the robot using it defenceless should he have no conditions to summon the key (this is small enough for a kid to lose without even trying). Supposing Breakdown meets an opponent who is not so reliant on the key to have functional weaponry, he's so doomed. Yes, this is silly both on plot- and toy-level... 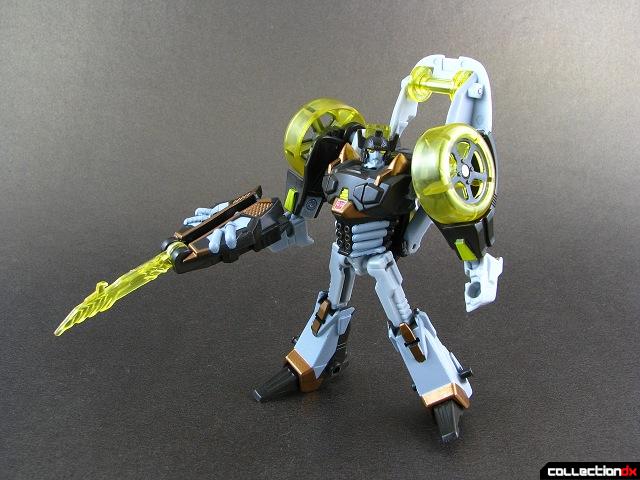 And while adding the sword to his arsenal does make posing slightly more interesting, this adds up to my another meta doubt- giving a weapon that requires almost point-blank distance from the target to effectively strike to a supposedly old and less agile character whose chances of survival would much higher with a indirect projectile weapon... just say already you want him to pass away with some dignity, designers... 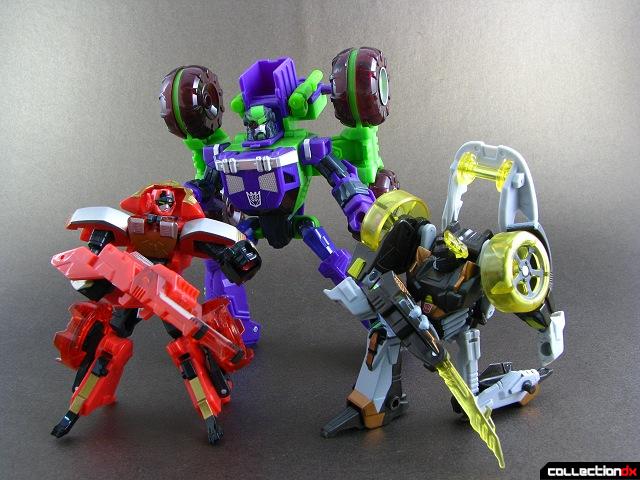 Hmm, no, scratch that, his enemies are Ransack and Dirt Boss, both reliant on Cyber Keys to deploy their only weapons... and even when Ransack managed to pull it off, he's not competent enough to be anything else but Decepticon cannon fodder like he was in the show. Maybe there is still hope for our old timer after all. 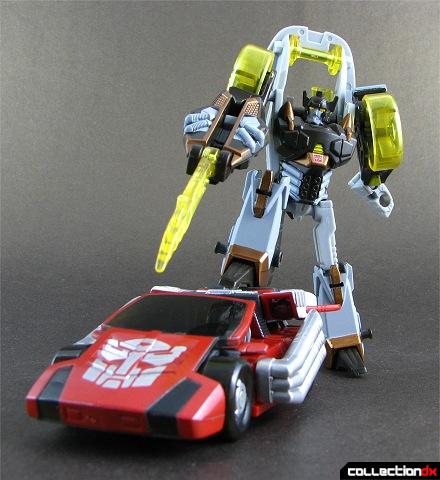 Bottom line, I tried to like this toy for its attempt at making something aesthetically different of itself, but the good things are outweighed so much by the bad (especially hard to understand vehicle mode, poor robot mode poseability, failed aged stylisation and silly Cyber Key gimmick) that I would not buy this toy at all. In fact, I didn't buy it. It was a free gift added to my purchase of Cybertron Armorhide and Energon Shockblast. And that's the only reason I have him in the first place.

This is only for people with a completist streak. There are many other less flawed, or even actually good Scout-class Transformers out there for you to choose from.

1 comment posted
Ah I have this guy. It's a

Ah I have this guy. It's a decent figure. Cybertron was an average line IMO. Nothing really distinctive other than the toy of Primus which was the high point for the line. I did like the concept of Transformers inhabiting different planets though.