A few years back I bought a lot of junior machinders from a friend of mine, including Dangard Ace, Jeeg and Gundam. As a gift, he also threw in a loose, incomplete Daikengo knock-off called "Robot From Outer Space".

I'd seen it for sale a number of times in the past and just never pulled the trigger on it for one reason or another. So it was nice to have this as a cheap placeholder. But eventually I would have to upgrade and that time came a couple months back when I saw one on Ebay with a 30 euro "buy it now". 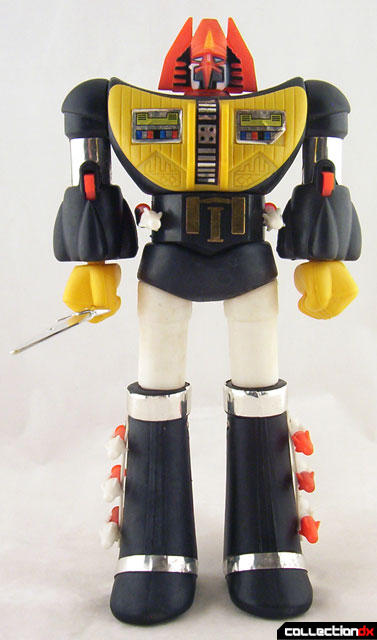 I usually associate a bootleg toy with the robot whose head it borrows so that's why I consider this a Daikengo toy. But as usual, it also features the limbs from Robo Kress. The toy is 15" tall and articulated at the neck, shoulders and hips. The arms are hard plastic and the head is vinyl, with the rest of the toy made of polyethylene. 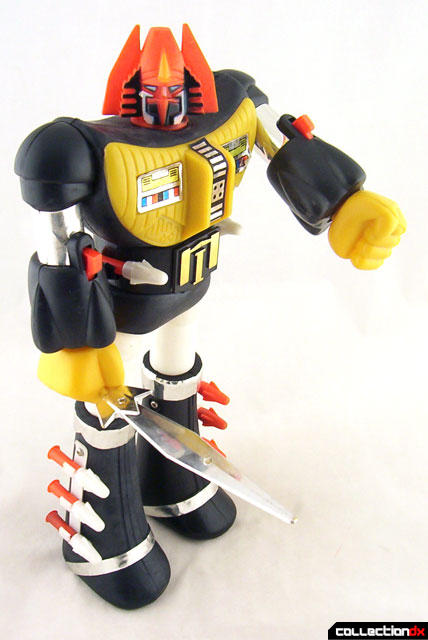 For weapons, both fists shoot and there is a single missile launcher hidden beneath the removable belt. Eight missiles can be stored at the waist and on the sides of the legs. The right hand can hold a chrome sword. 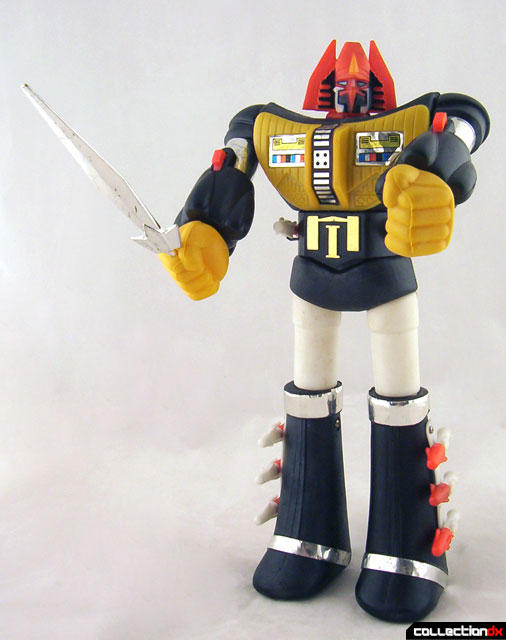 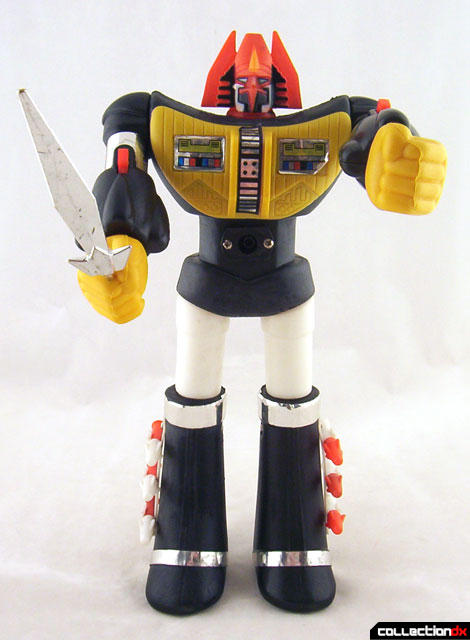 The box measures approximately 16"x9"x3.5" and is interesting for a couple of reasons. First off, it shows the toy with a different belt than the one that came with mine. This isn't much of a surprise since these toys often have variations (more on that in a minute). Secondly, even though the toy was made in Hong Kong and distributed in Italy, all the directions are in English! The only thing in Italian is the warnings on the sides and on the sticker placed on the front of the box. 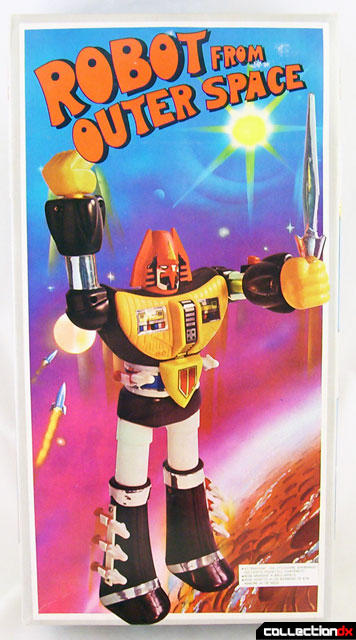 I'm not sure what it means by the belt being used as an "arm ring". It doesn't attach to the arm or anything like that.

Ok, back to the variations and the toy I originally had. When I compared the two, it was obvious they weren't quite the same. 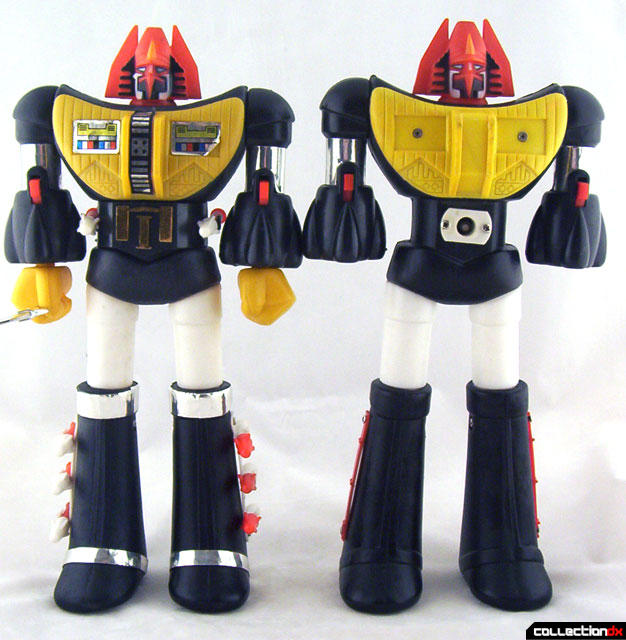 Disregarding the missing parts and stuff, the first thing you can see is that the arms on the new one are lower than on the old. Furthermore, the plastic missile holders on the legs and the launchers in the waist are different colors, too. 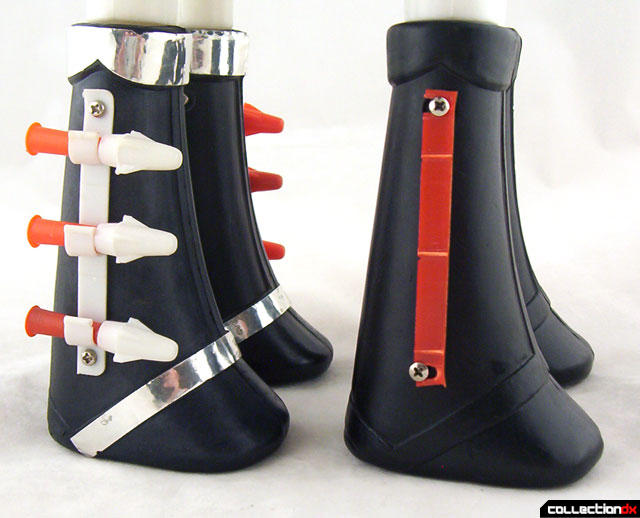 It's hard to see in photos, but even the heads are slightly different with the vinyl on the old one being smoother. It looks ever so slightly bigger too, but it's really difficult to tell for sure.

There seems to have been quite a few of these popping up mint in box lately and these differences made me wonder if this toy might have been re-cast and/or re-released recently? Or perhaps these variations have always existed and there's just been some old stock discovered? I can't say that I really care a heck of a lot either way. I'm just glad to finally have a complete one that doesn't need to be hidden behind other toys on my shelf.

5 comments posted
Mine does have the belt

Mine does have the belt shown on the box, but I think that is the only difference. Kind of odd that you got the other belt (which I have on other juniors), given that belt seems to fit only with this kind of junior body.

turk
---
The time you enjoy wasting is not wasted time.--Bertrand Russell

Does your box have the sticker or other writing with the safety warnings? I was looking at a picture you posted and I couldn't see it, but the toy was in the way. I'm wondering if it's missing on yours, if it might indicate mine is a recent version that needed to legally have it on there? Also, my box is in great, like-new condition, the best I've ever seen for a junior machinder. If what I got is a new release, I think that's great news. I'd love it if they were still cranking this stuff out!

Also, the seller I got this from had at least two others and they were all the same, belt and all.

Nope, mine has no warning sticker, and the box is in fairly worn shape. That'd be great if they were actually still manufacturing these things.

Who was the vendor you said had more of them? I'd like to get one of that variant.

He had an auction up with a quantity of 3 but they're all sold. I tried to talk Jerilock into getting one, but didn't bother sending it to you since I didn't think they were any different and I knew you had one.

I just got an email from a friend of mine in Rome who said that a dealer in southern Italy found a bunch of these in a warehouse recently and that's why there have been so many on Ebay lately. So, unfortunately, they're not making new ones stilll... :(