Nothing truly surprises me anymore in the field of strange bootlegs, but I was not expecting to hear about this 12" Gordian Junior Machinder. A friend in Venezuela discovered it and knowing how much I love this sort of thing, offered it to me. I bought 2 color-ways initially and he sent me the last later on as a gift included with another purchase. (And I'm glad he did, too, since it helped take the sting off one of the worst shipping experiences I've ever had.) 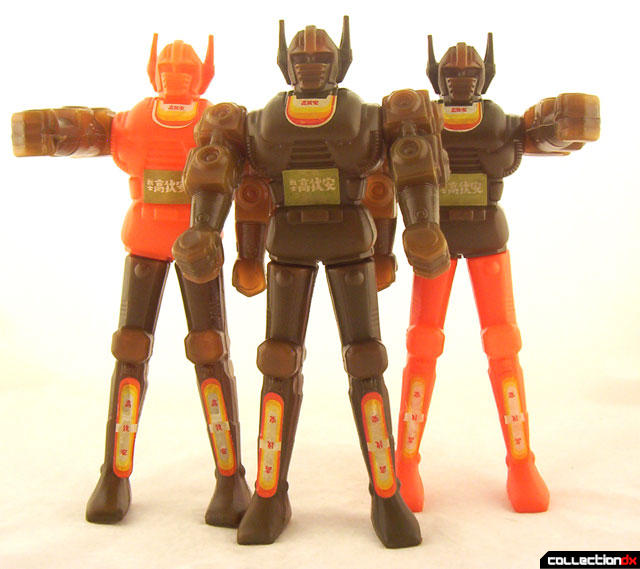 As you can see, the toy is so far known to exist in 3 versions. Each is the same outside of the color change. They are all 12" tall and articulated at the hips and shoulders.

Although these specimens came from Venezuela, you can tell by the sticker on the stomach that they originate in China.

I don't know enough about Gordian to say from where the mold is copied. I thought initially it might have even been the Godaikin, but I think someone mentioned the Popy Pura-Dera might have been the source. If you know, please leave a comment. The detail on the fists are pretty terrible, which leads me to think the rest of the toy definitely was NOT an original design.

I don't know why, but unlike most of the other cheap poly bootlegs I have, I find myself wishing this had more anime accurate coloring. This toy was sold in a clear plastic bag that was simply stapled shut with NO header card.

One thing that makes DX so great is its Bootleg section and this is just another fine example, I'm keeping my eyes opne for you for these kind of items but all I ever see is knock off Super Sentai figures. One of my favorite websites ever that has since disappeared was bootlegactionfigures.com. We would get on the site and laugh our arse off of what people did to our beloved characters! A site well missed!

About your bad shipping experience, that has got to be the worst dim witted postal experience with somebody that can not think anything through. Dreadful!

As you know I collect rare 6T's soul and psych 45rpm records and I make runs for a label meaning I try to get every record using the catalog number. It took me 10 freakin years to locate a record I was looking for. Well the postman couldn't fit the record in th emailbox so they folded the record package neatly in half and stuffed it into the box ! Neadless to say a record is very much worthless when it's in 5 peices. Needless to say it took another 5 years to locate the record again. People just don't understand how rare the things we collect are and we simply can't replace them on a whim.

Wow, I knew you liked that music scene but I had no idea you were so hardcore in collecting the records! Do you ever find yourself compelled to buy records from artists you hate just to have a complete run?

Anyway, thanks for saying that about the boots, but I don't think I'll ever shake the feeling that you guys are just humoring me when you say it. Most of the ones I've done this year I never would have bothered with, thinking there'd be ZERO interest, but Josh wanted me to keep contributing and since that's what's in my collection, that's what I gotta do.. ;)

You know it! If you find a really good label usually everything is great But i was collecting kama Sutra records for its great soul and Soft Pop records and it forced me to buy every Loving Spoonful record...I like the group but not that much!

As you know the same thing happens in toy collecting, usually the most expensive or rarest item isn't the most popular but the one that nobody wanted so they didn't produce many. I can not stand many of these forced collectables (as you stated before in one of your comments) "tomorrow's collectable are the toys that came and went that nobody cared about".

In the end you end up chasing down things you really don't care for just to get a complete set. To me that's the sanity check! Do I get the last Yutaka Spiral zone figure I need but can't stand or get the Mazinger Angel Busts that totally kick ass!?!