Some years back, Marmit released a series of jumbo-sized vinyls based on the robots from the original 1967-68 "Giant Robo" (aka "Johnny Sokko And His Flying Robot") tv show. Giant Robo, Calamity and GR2 were all made. Now, to be truthful, I never paid too much attention to the whole line. I do know that I've seen some released in a bag with a header card and some released in a box. Some have arms pointing straight down and others with the arms raised above the head. The toy we are looking at now is a bootleg based on the Giant Robo version with arms at its side. It came with no packaging.

For a bootleg, the quality on this is remarkable. I think most people would be hard pressed to differentiate it from the original without a close inspection. Other than that the copyright information has been removed from the bottom of the feet, I'm not sure if there are even any differences at all. This it the reason I don't know all the details of the original Marmit releases. This one is so well done, I never had the desire to get any of the Giant Robo originals. 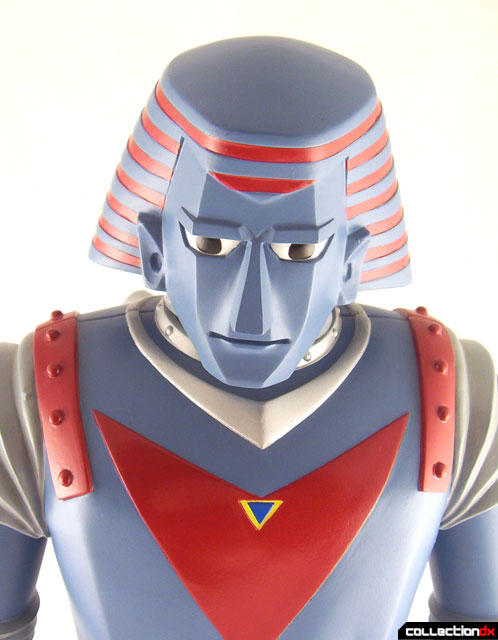 This guy stands 21" tall and although it does have several points of articulation (neck, shoulders, wrists, waist, hips and ankles), it really isn't very poseable at all. In all likelihood, the only places you'd adjust the limbs might be at the ankles, and only then to make sure the toy has a firm grip on whatever surfacing it's standing on. It has a tendency to lean forward so you'll want to make sure it doesn't topple over. I sometimes even place a few old hockey cards beneath the front of its feet to straighten it up a bit.

Giant Robo is cast in blue vinyl with painted highlights. As I said before, the paint job is surprisingly good for a bootleg. There is a small blue jewel sort of thing embedded in the waist and he has rockets on his back. You can wiggle the bottom of these rockets, but like most of the rest of the toy, just because it can move, doesn't mean it's worth the effort to do it. Consider this just a display piece. Also, be careful with those rockets. One of mine has broken off a couple of times and I've had to glue it back in place. 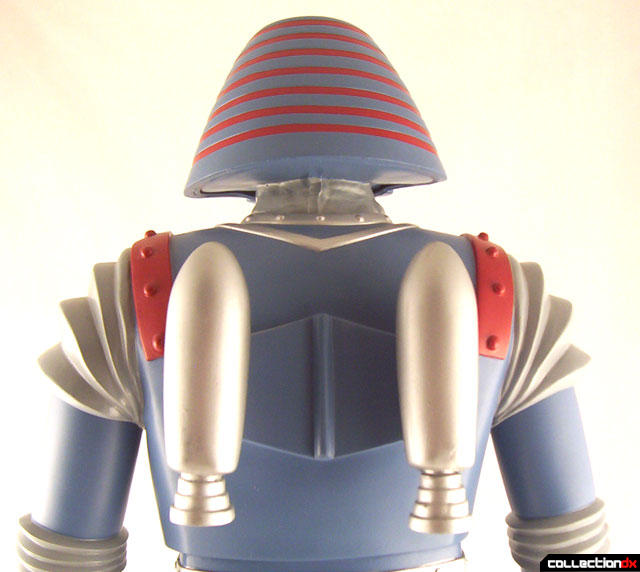 When I first started collecting, these things were all over eBay, and while you can still find them, they seem a little less common now. In fact, the official Marmit seems to be just as prevalent and the price about the same in general. Recently, a bootleg of Calamity has shown up, but GR2 has only the original release, which I'll review next. 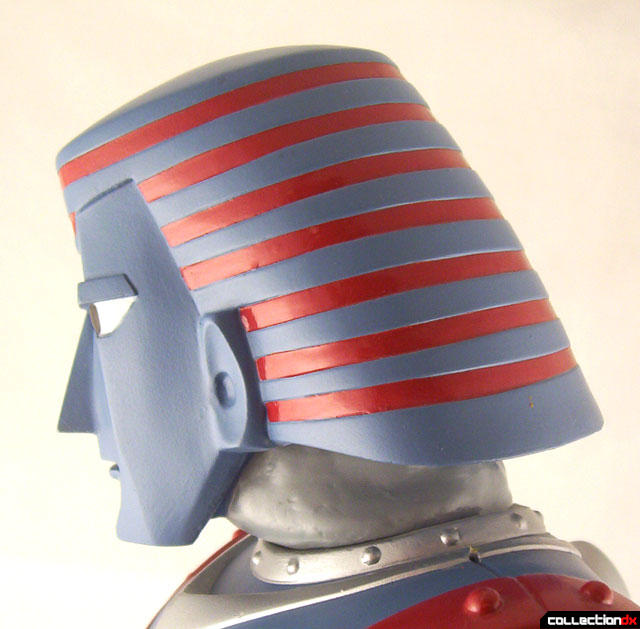 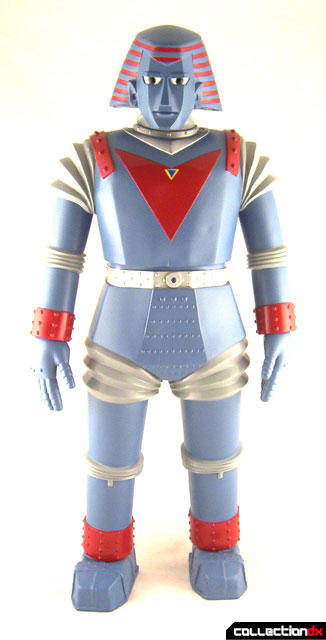 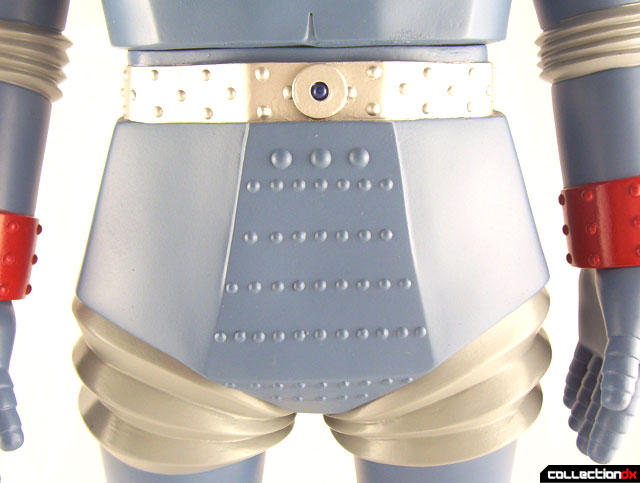 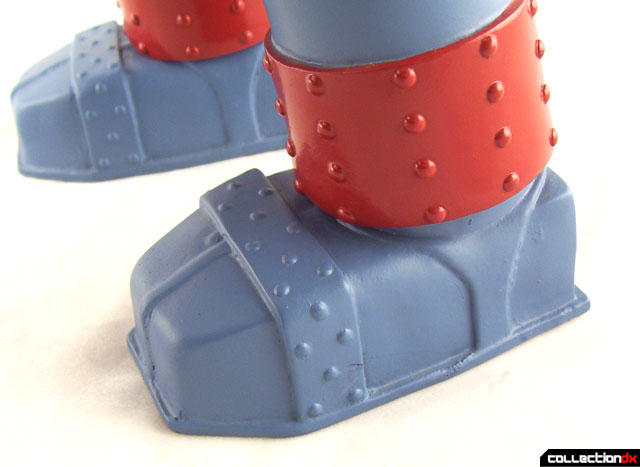 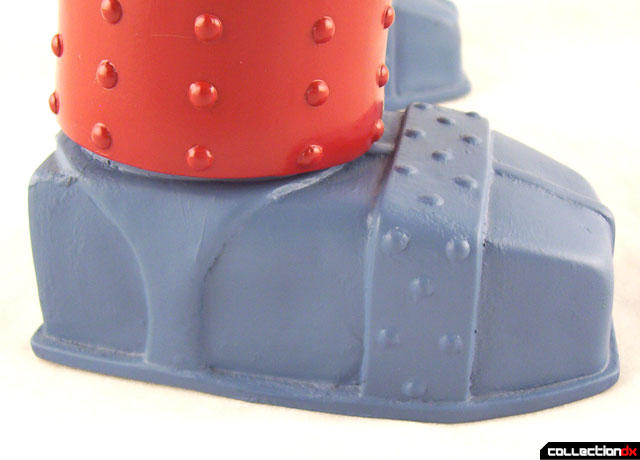 Not sure why I'm resisting these, but for some reason, I have trouble getting behind them. I've seen 'em a million times before, and it's great to get the skinny on them...but at that scale, I somehow desire more traditional distorted JM proportions.

I mean, Giant Robo already has pretty silly proportions, but this figure is too "realistic" for me. For some strange reason, I feel that such realism belongs at a smaller scale. (Yes, I realize that I still need to get on those Soft Garage reviews! :P).

Weren't these known for having really bad leaning issues? I mean moreso than a couple of hockey cards could fix.

That was a great review. Really made me wish I never sold mine.
-Dan

Yeah, Sanjeev, I didn't feel like waiting for you to get off your butt and do those reviews.;) I agree that more traditional JM style is always better, but I've always wanted these since seeing them in King Rory's lineup.

Thanks, Dan! I feel your pain. I spent the whole weekend wishing I had my old Castle Greyskull back! lol

Yours is articulated at the shoulders? The arms on mine don't move at all. It only moves at the feet, waist and neck. And mine has no trouble at all standing without help.

It's actually looks cool, y'know, for a knockoff :)

One word left to say: MESH!