Destro-Bot is a near jumbo sized monstrosity that was made in Thailand, sold in France and extrapolates from the Japanese Bio-Commodore toy/game made by Bandai. For years people had suggested that someone make a custom Biorobo jumbo out of this toy so it was a huge surprise to find out that not only had that happened, but the result was mass produced. 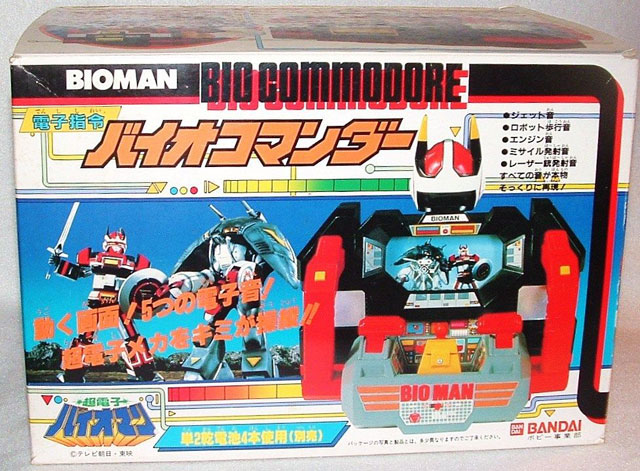 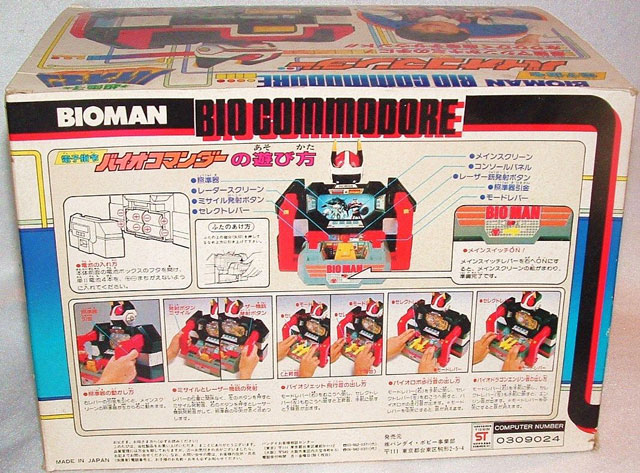 There's a lot to unpack here so I'll start at the beginning and talk about the box. The top lid features an image of the toy in full robot mode, with all it's other various modes depicted along the left side. I'll touch on those as we move along. I love the shiny gold lettering in the name, but the grid on the floor and shooting stars are a nice touch also. The whole presentation just reeks of the '80s. 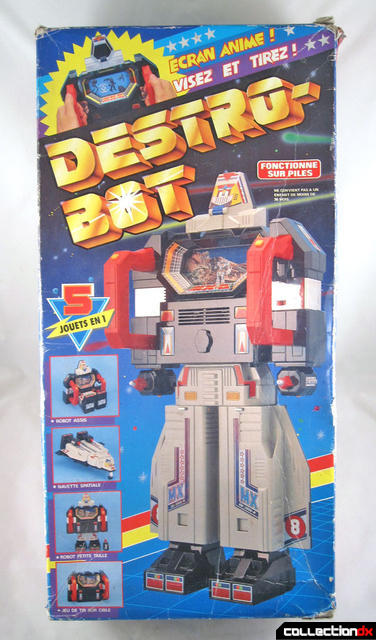 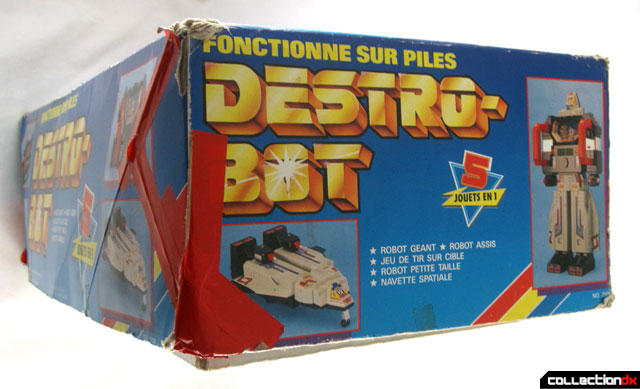 Inside the box, the toy rests in a cardboard cutout to help stabilize the toy in transit. I actually like this much more than the flimsy inserts that you normally find in jumbo boxes. It's not quite a styrofoam tray of a chogokin, but it's an improvement. 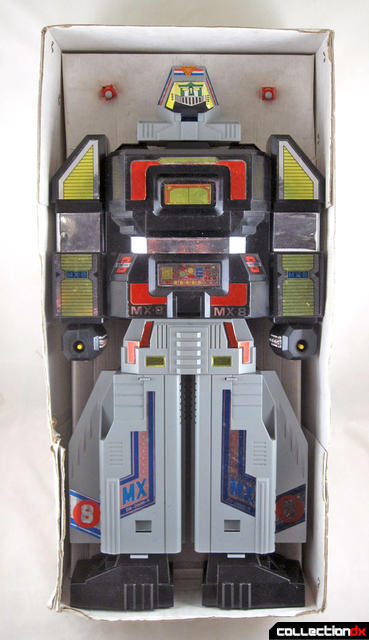 Once you remove the toy from the box and inspect the robot, you'll see how disappointing it is. 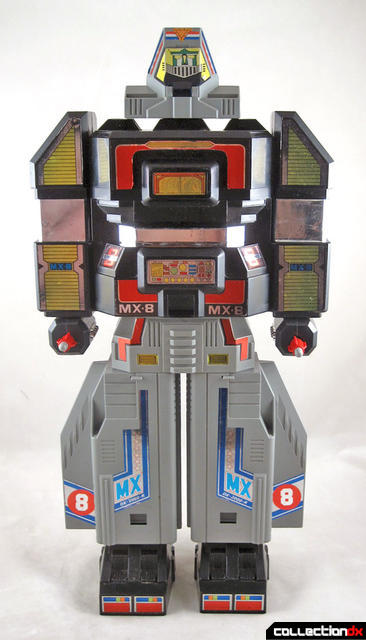 Starting at the top, check out the head. It's the very definition of "fugly". The mouth grill makes me think that they are trying to make it look like Mazinger Z, but check out the blonde "hair"! It's hilariously bad. That said, I'm always a sucker for any toy with a face depicted by a sticker. 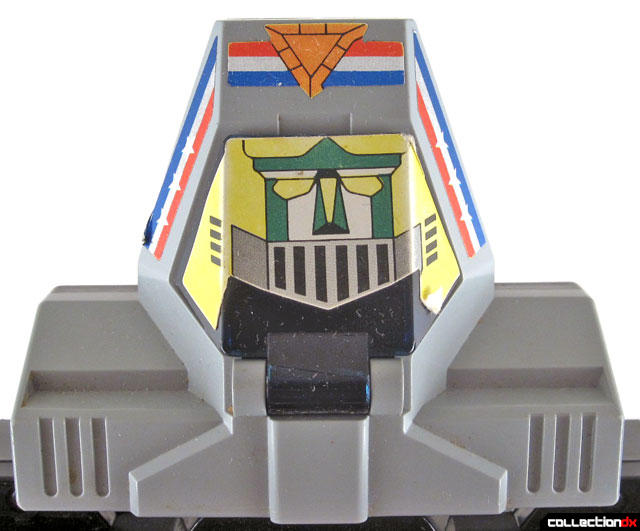 Since the body is taken from an immobile game, there is no articulation in the arms. The entire torso is one brick. It's adorned with various mostly nonsensical stickers and some shiny foil stickers that are less than ideal for photography. 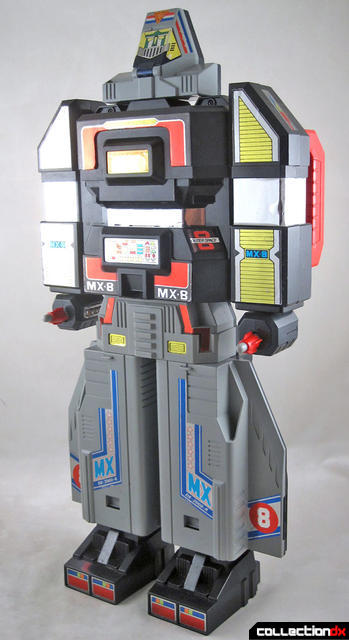 The hands on the robot do not shoot but a missile launching mechanism has been incorporated into each fist. But since the arms do not move, they shoot at an awkward angle. 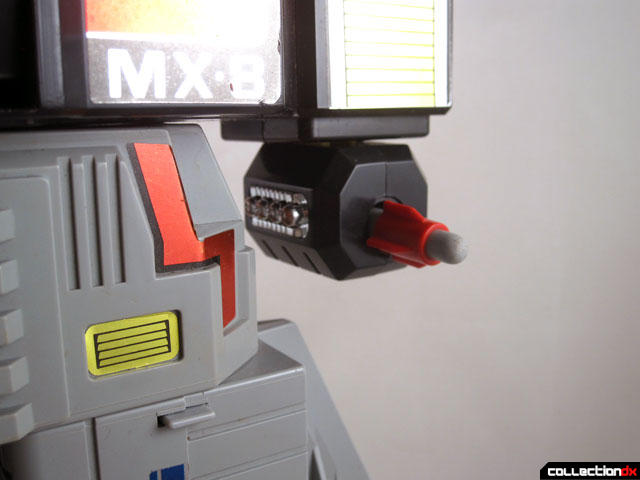 And yes, those are basically exactly the same as traditional jumbo missiles, except that they are cast in gray. I think this is the only toy out there with gray jumbo missiles so that's actually kind of cool. 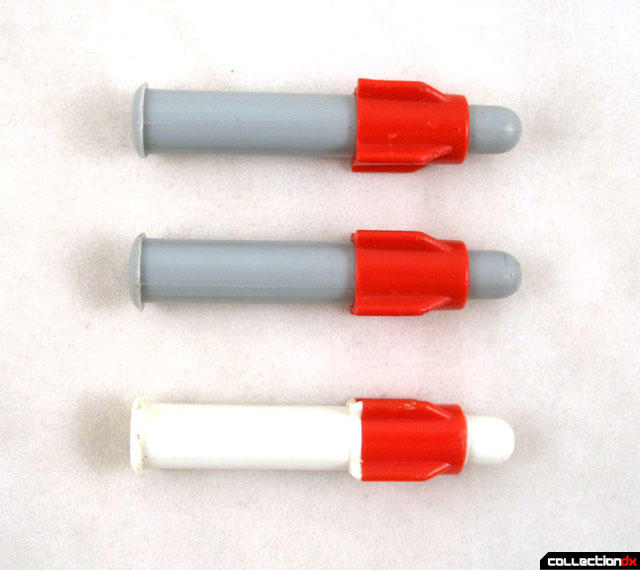 On the back of the robot, the old game aspect of the original toy remains, but it's been changed. It's essentially a target game. There is a scrolling roll of artwork which features characters from Dunbine and Macross and you are supposed to shoot at them using the triggers embedded in the handles. One moves the scope while the other fires. You need to unscrew the lid to insert the batteries. 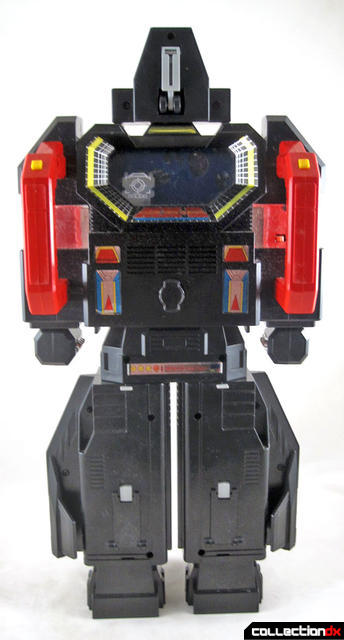 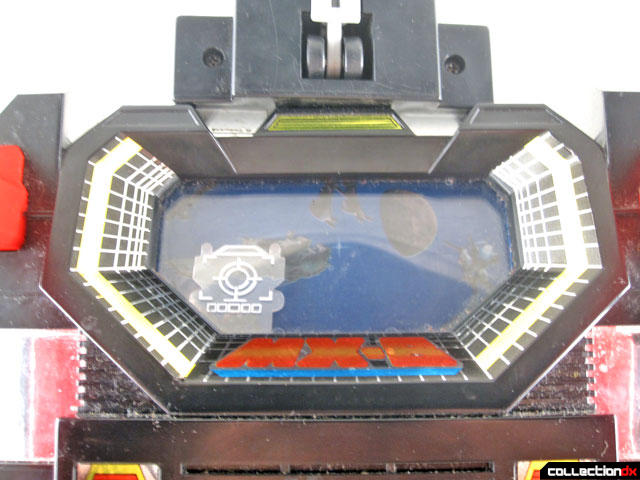 Besides being a big robot and a game, the toy can also be broken down into it's individual parts and re-assembled into other forms. 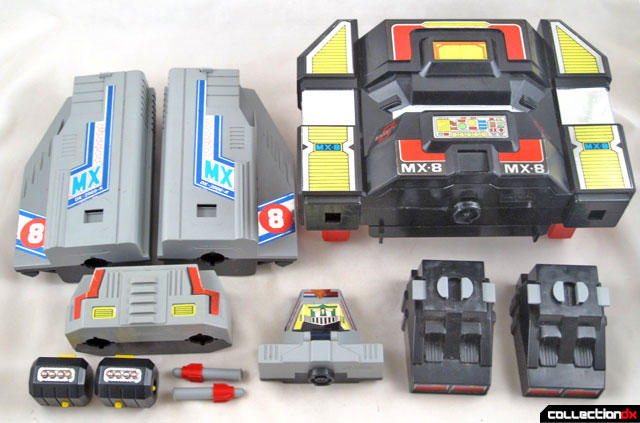 The first alternate mode is basically just the robot turned around and with it's feet extended. Why? Who knows? 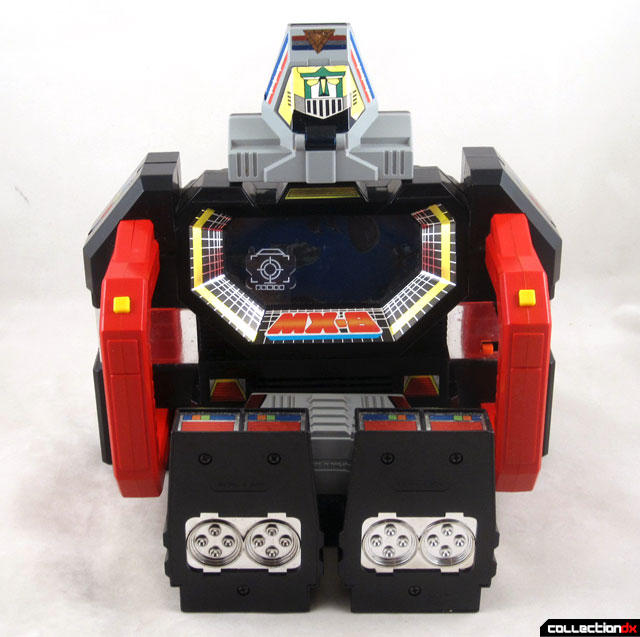 The second alternate mode is basically the same thing but standing up. Why? Who knows? 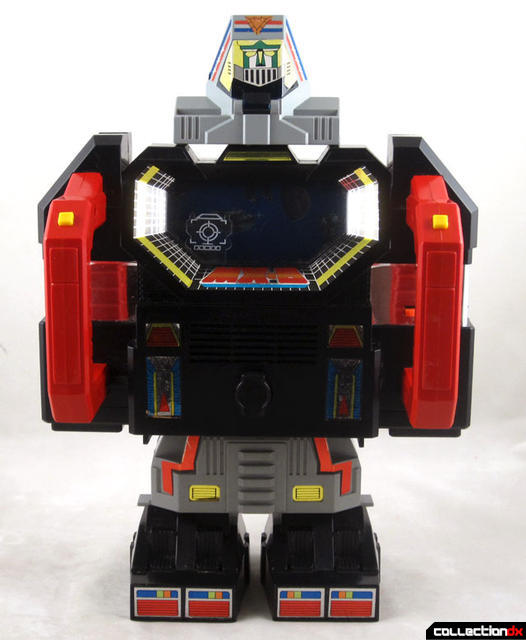 The third alternate mode is basically just the game aspect completely removed from everything else. Why? Probably to make game play easier. This actually makes a bit of sense. 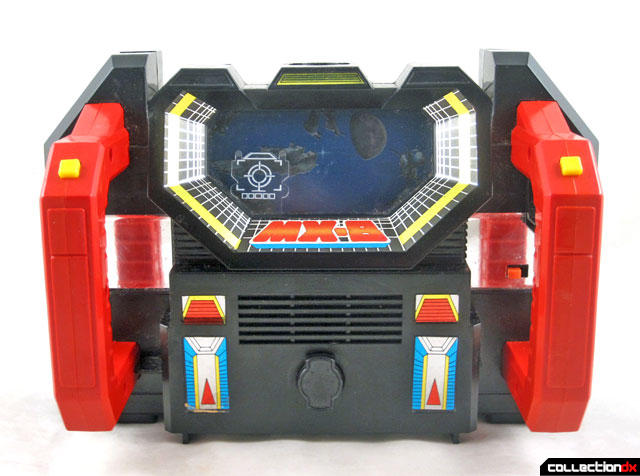 The fourth and final alternate mode uses the remaining pieces to form a copy of the Bio Jet 2 from Bioman. I actually like this mode a bit. The legs form the main body of the ship and the head forms the cockpit. You can place the hands, with the missile launchers, on top to add weaponry. Wings fold out, the cockpit can be opened and landing gear folds down. The final result might actually be the most visually appealing part of the whole toy. I'm aware that I might be damning with feint praise here. 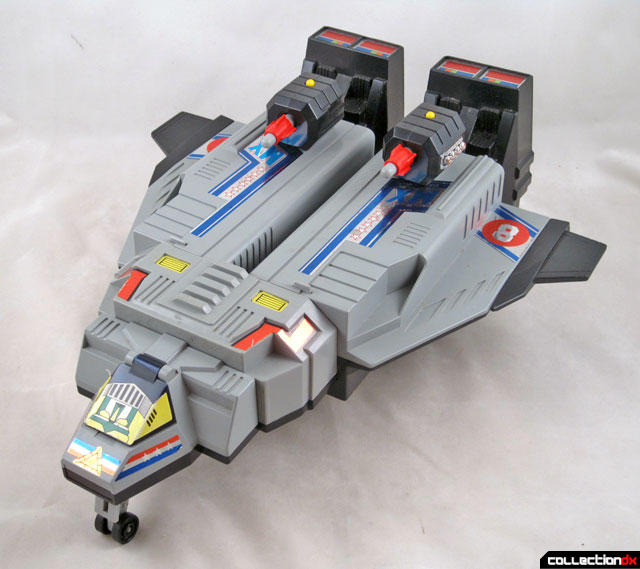 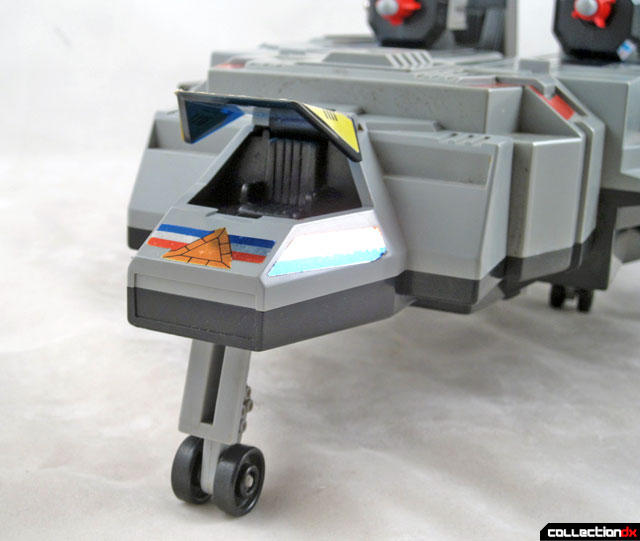 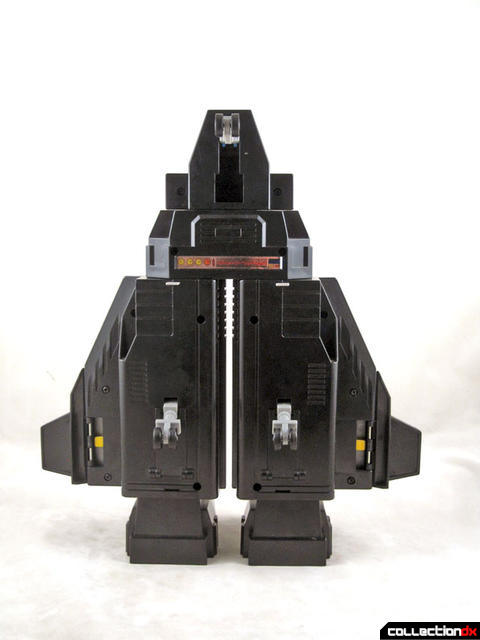 I've only seen this toy for sale a handful of times, even though I actively searched for it for several years, so it seems to be somewhat rare. But it's a really ugly, really bizarre toy and even the most rabid jumbo fan probably doesn't have any great desire to own it. Just because it's big, doesn't mean it displays well. Here it is with an actual jumbo to prove the point. 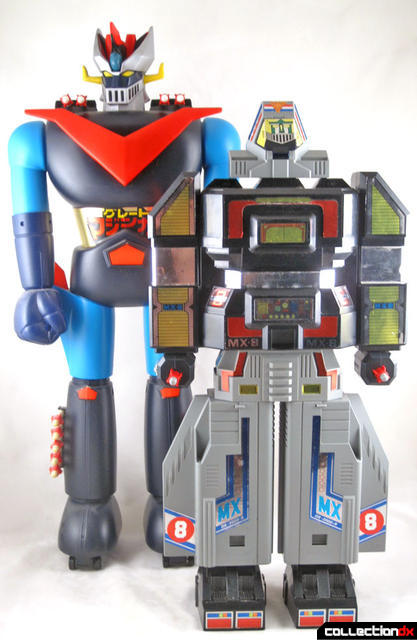 That said, I love it. But that fact probably says more about me than the toy itself.