Would you believe Matty Collector's quality control actually got worse since the last release? Up until now I have seen noticeable improvements in QC in each release since February. The Blue lion is noticeably worse off in assembly and paint detail than the previous three lions combined. 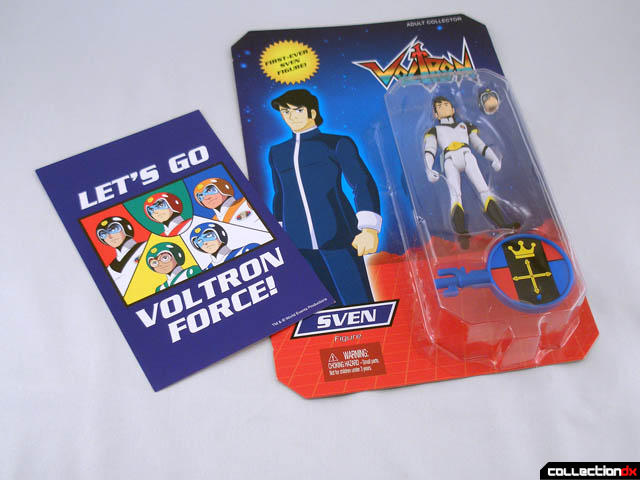 In the summer of 2011 Mattel offered a “subscription” to this Voltron Classics line, and as an incentive for doing so offered a club exclusive figure. The figure for this line is Sven, the first Blue Lion pilot before getting mortally wounded (in the original Japanese show he dies.) Included in this shipment was my club exclusive Sven... and that’s about all the excitement I can drudge up about that... I never cared about Sven and i'm not going to start now. 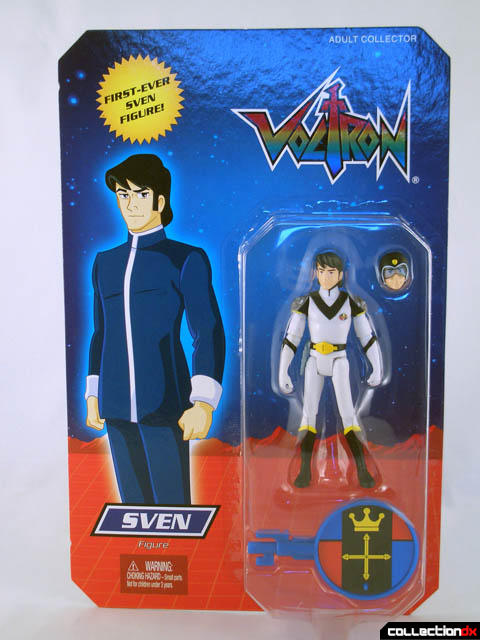 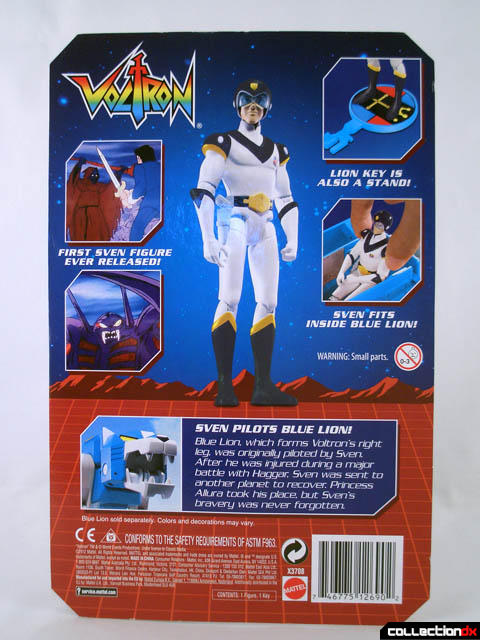 Look at the back of the card for the figure... see anything wrong? Apparently, the PR people shot the wrong lion for Sven and corrected it by photoshopping the color of it. In the photos they are using are of the Red Lion. It’s stuff like this that proves the folks behind Matty Collector do not give a shit about paying attention to the details. 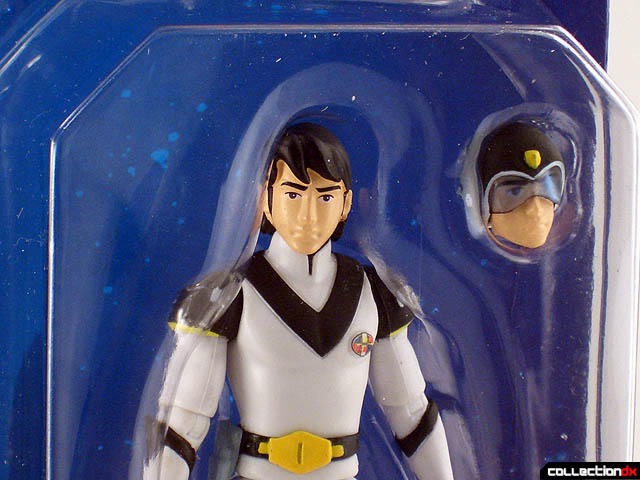 The package for the Blue Lion is identical to previous releases. A big giant window box with the Lion on display running. 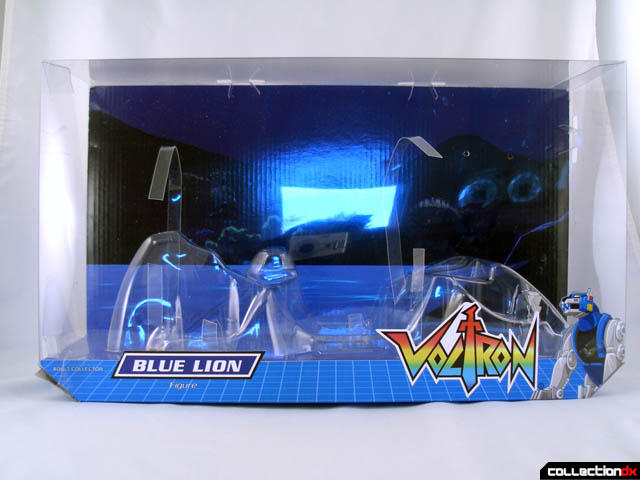 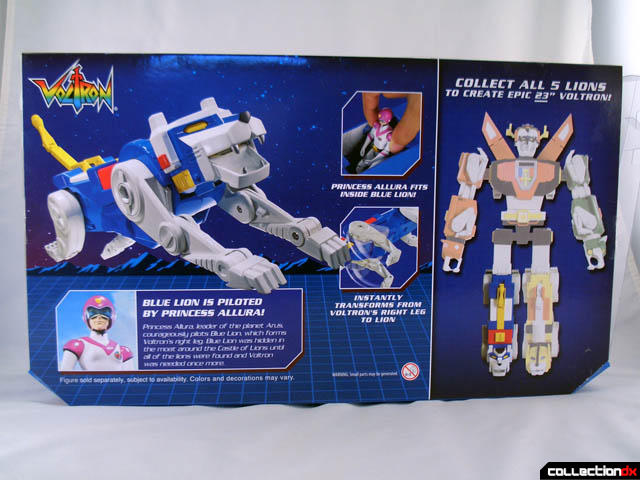 The Blue Lion was piloted by Princess Allura, who is included with this release. Figures are packed separately in a cheap-looking box that includes the figure, accessories, and another piece of the NOT-LIGHT-UP-Connect-And-Collect Blazing Sword. 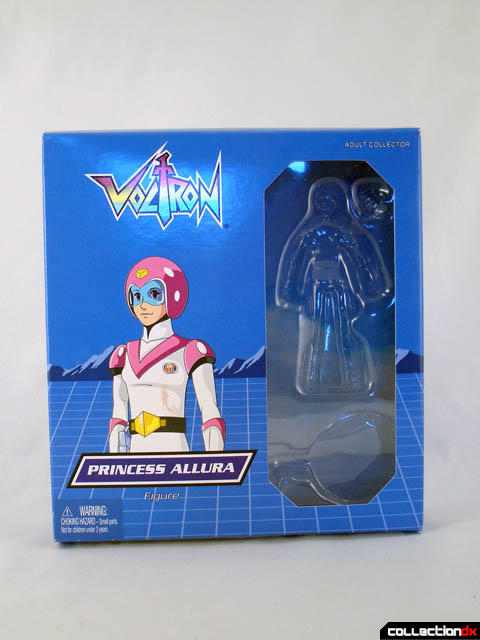 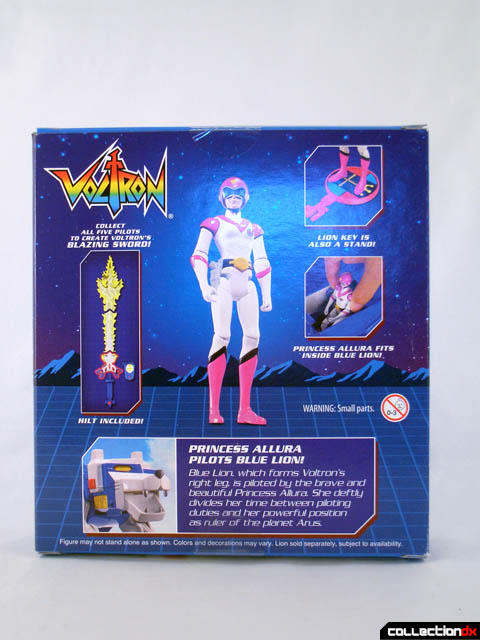 In case you are too stupid to figure out how to put Tab A into Slot B Matty Collector included instructions on how to assemble the Sword. 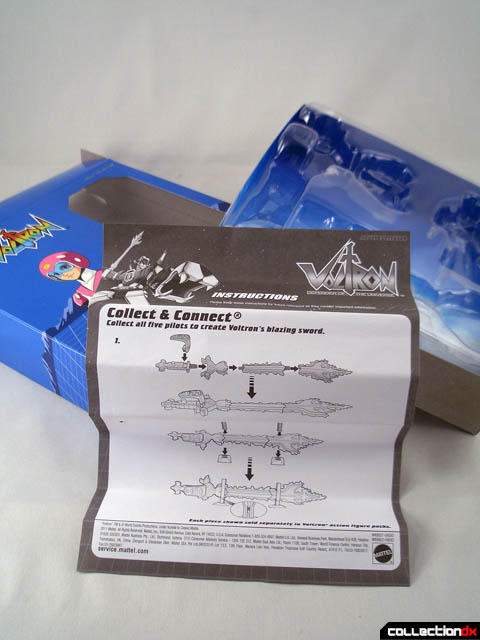 The Blue Lion is the fourth release in the line and upon initial inspection it seemed fine. If you are the type that just puts their stuff on the shelf and looks at things from afar then the Blue Lion is a perfect release and you are exactly the kind of customer Matty Collector is looking for. 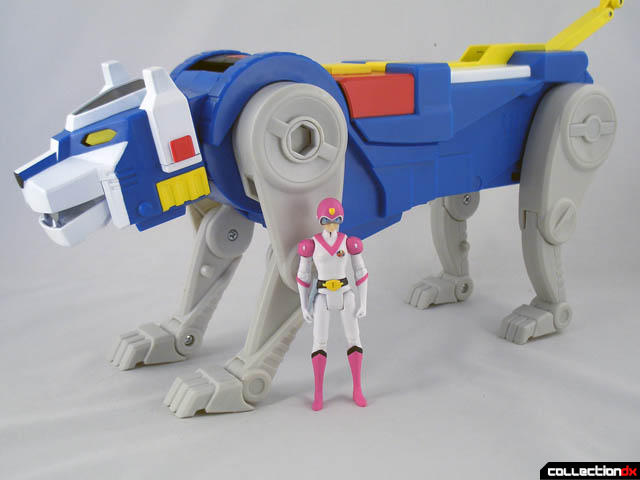 Once I started fiddling with it I quickly realized this release had more than a number of issues. 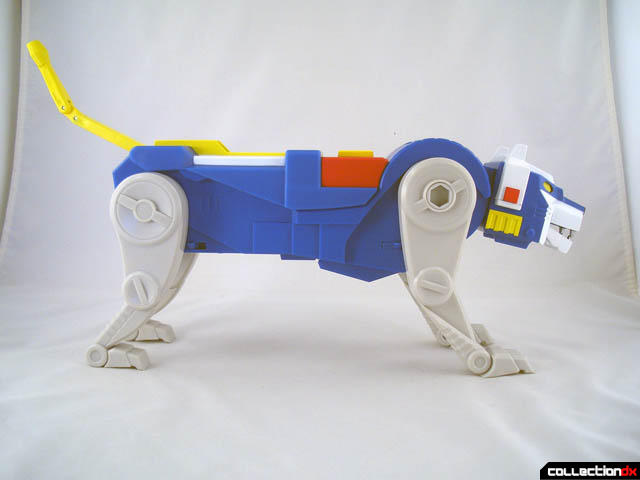 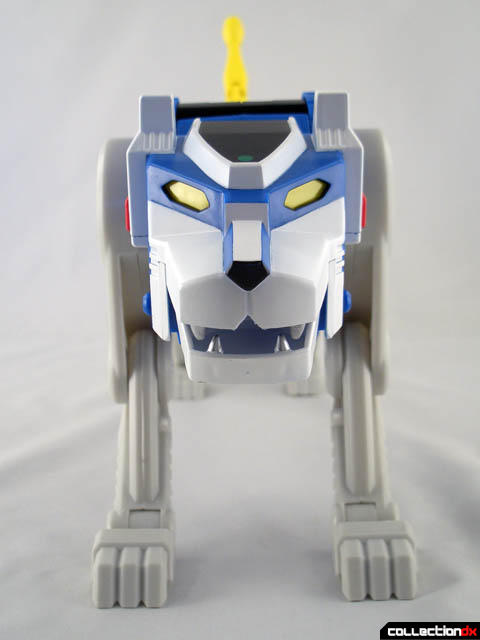 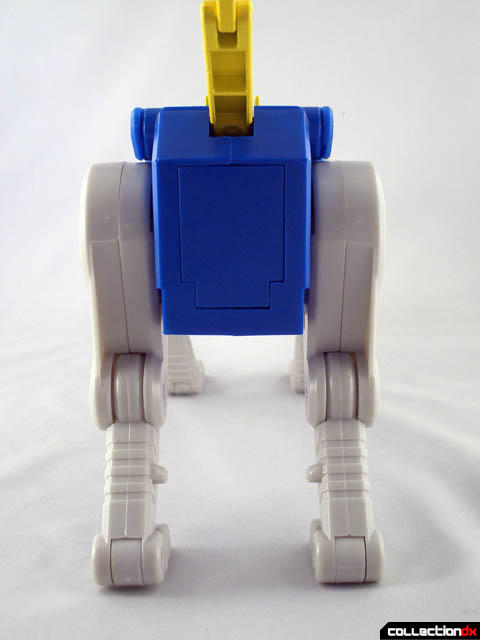 First is the leg assembly. It’s hard to show in the photos, but the front legs have too much slack in them between the leg and main body as if something is not properly screwed down inside or is missing an o-ring. It still holds the legs in when in the leg form but barely. Racheting in these hip joints is noticeably “looser” as well. 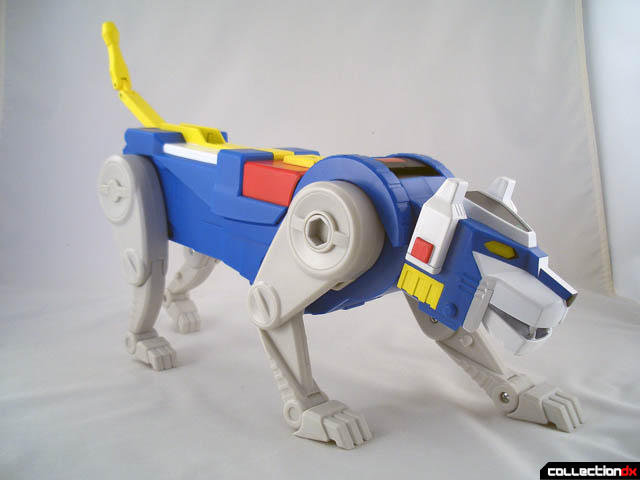 Next is the rachet joint in the neck. On the Yellow Lion it is tight and snappy. On the Blue Lion it is almost nonexistent. Again, like the legs it “feels” as if something isn't assembled correctly inside. 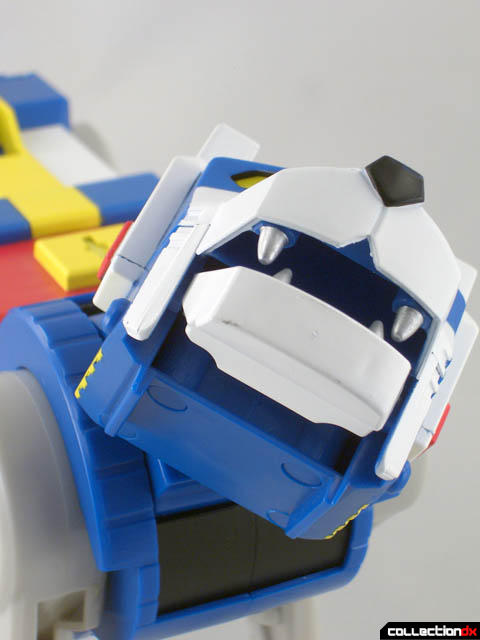 The tail is not molded in color, but is painted in yellow. With the lack of quality in their paint choices I suspect this will show signs of wear even with just casual handling. 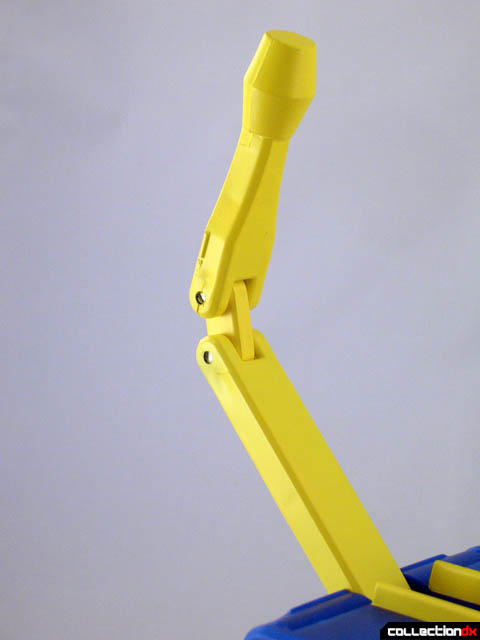 When trying to access the cockpit, the lid is almost always going to fall off. It doesn't clear the back of the lion so when you get there it causes the cheap plastic to bow and knock the lid off. 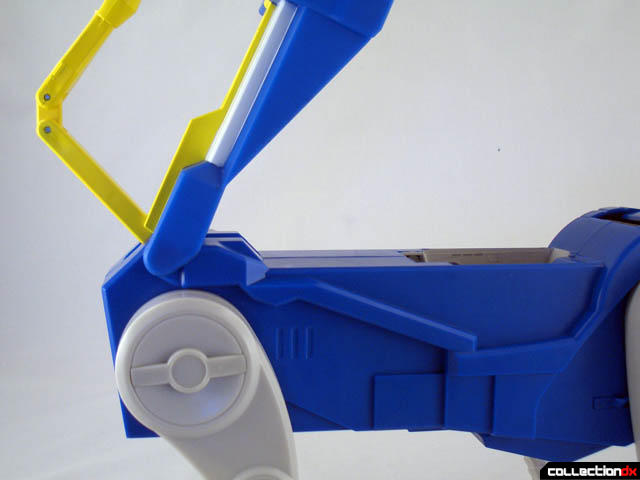 I’ve spoken with a number of collectors privately and they confirm these are ALL issues they have with their specimens as well. This isn't a case of me just getting a “bum” one. 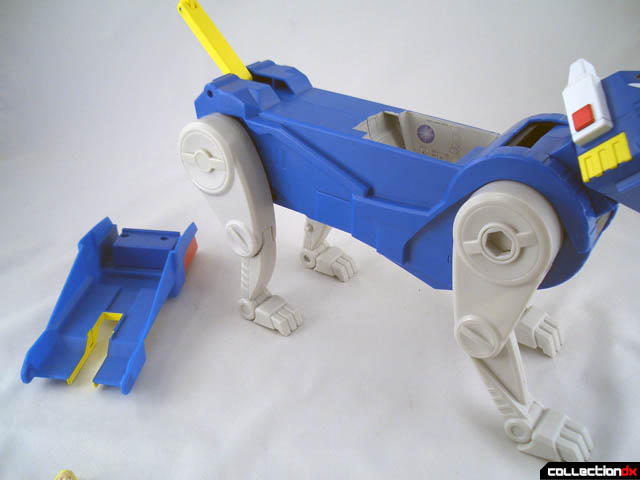 The fit and finish of the cockpit floor is hideous with the glaring, gaping visible seam. 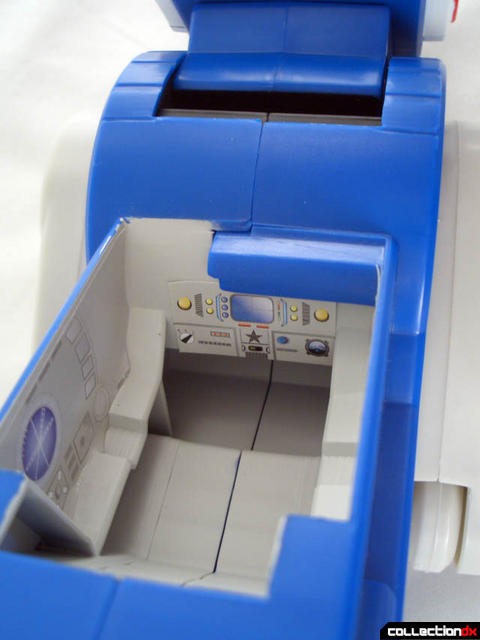 The paint job around where the cockpit meets the top of the lion is very sloppy, as is the general thickness and application of the paint overall. 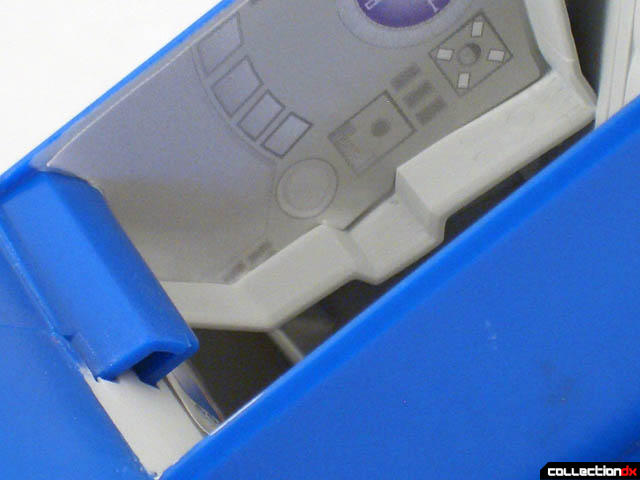 Please note the “care” with which my stickers are slapped in there this time.... 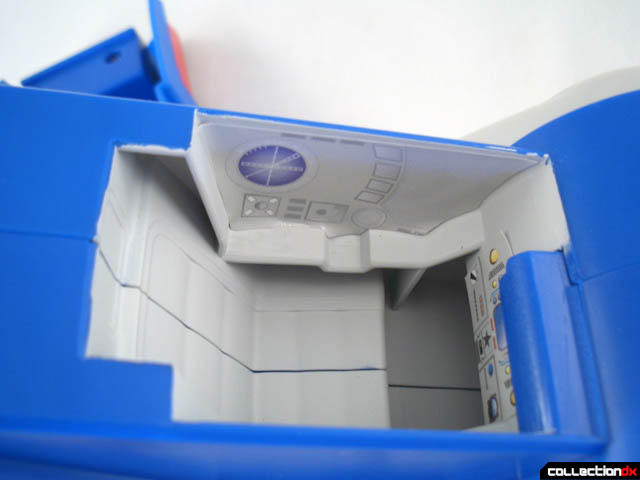 At least the Princess Allura figure isn't as asstastic as my last three figures. 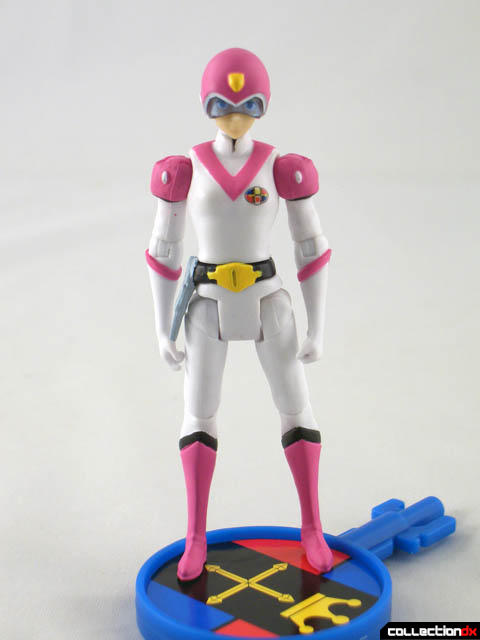 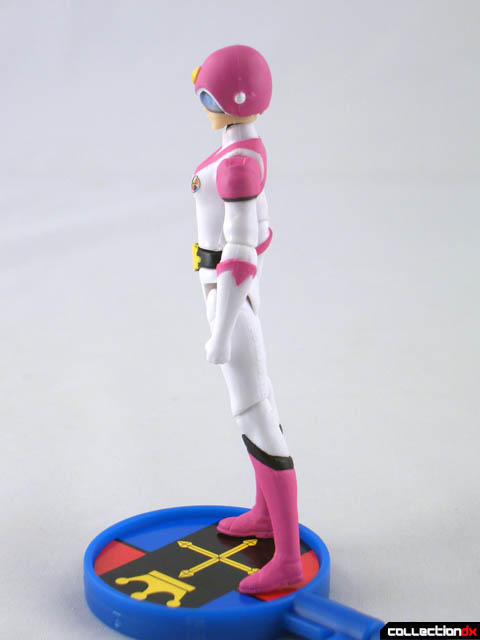 While there are no obvious flaws, she still suffers from sloppy paint application (note the pink spills on the white) and is just an all around soulless looking sculpt. 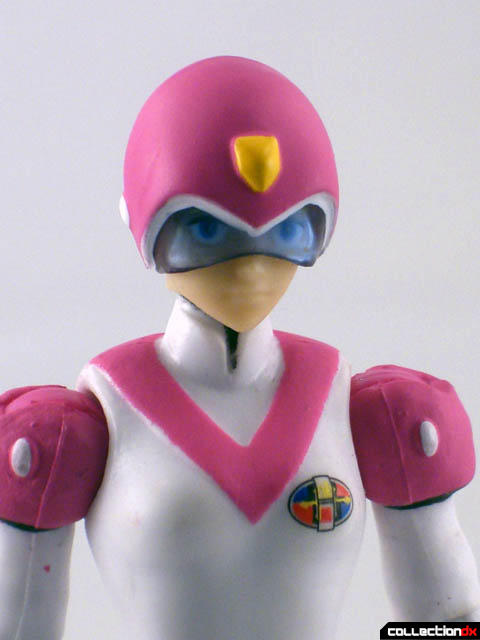 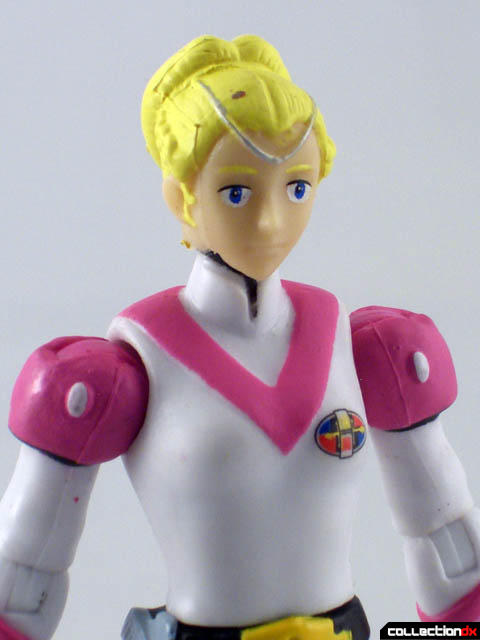 The unhelmeted head fares a bit worse in the sloppy paint department with large noticeable globs all over her hair. 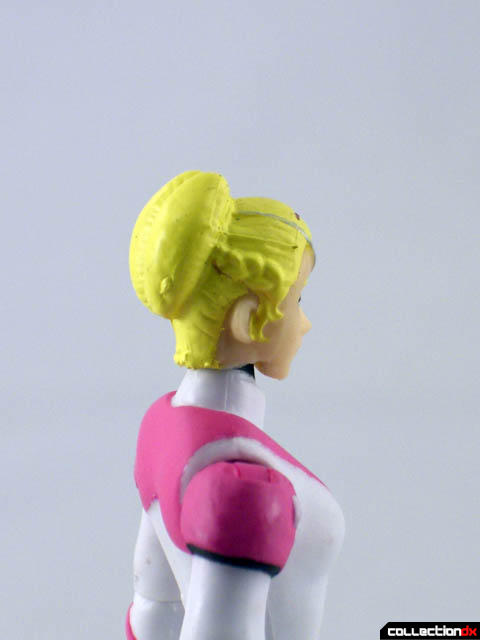 Accessories include the mouth blade featured in the show which stays snug in the mouth. Happily, the “Made In China” stamp is not facing out visible this time. 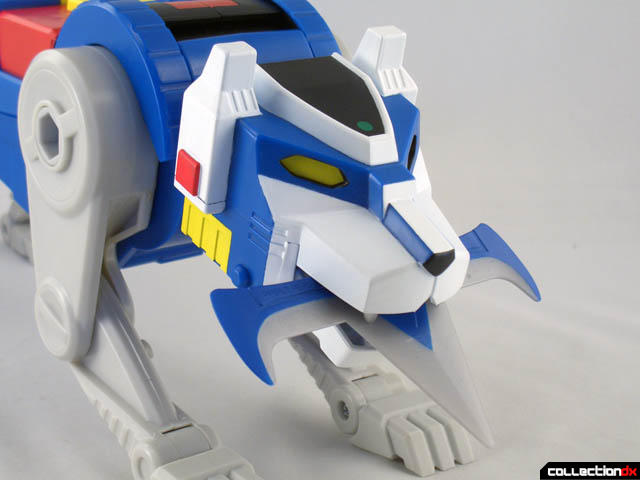 And of course the next piece of the sword. 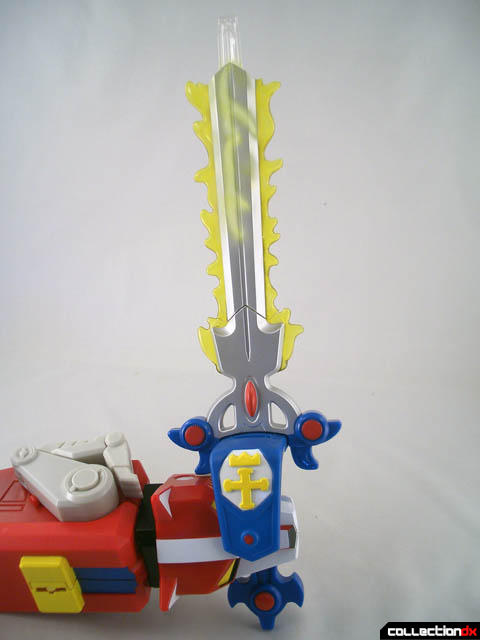 Also included is one of two stands to hold the sword up on display. They appear to want you to disassemble the stand every time you take the sword out, but the plastic is so brittle I am confident it will break the first time you try to do just that. Use with caution. 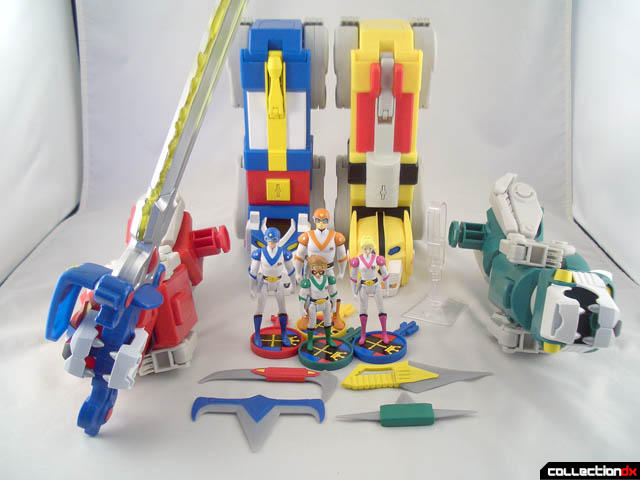 I would rather deal with long delays if it meant my overpriced toys looked immaculate instead of getting them when scheduled and looking like crap. Whoever looks this stuff over at Mattel and says this is good enough needs to be fired. It is very clear that no-one involved with the design, production, quality control, or fulfillment of this line gives a damn, whatsoever. As far as I'm concerned Matty Collector/Mattel is just flat out stealing fans' and collectors' money.

12 comments posted
This is only a suggestion but

This is only a suggestion but once you get the Black Lion and review it, you should immediately sell the lions and track down the18in COMBINING Voltron that Trendmasters did in the late 90's.

Really? It has chromed parts, firing weapons, light up eyes (all five lions) and a Blazing sword that's can almost double as a child sized roleplay toy.

The biggest error is the price. As glaring as the QC problems are, I think they could be overlooked if it just wasn't $55.

Does the yellow lion also have such a noticeable seem in the cockpit?

The whole line is lame on an aesthetic level anyway. People will be dumping these within the year.

Wow. Just... wow. I know Hasbro has a certain lack for QC, but this takes the Lion's share of the cake.
I remember my last TFCC figure's paint job was a little lacking, but I could at least fix it with some Testors, but this is a job for a complete overhaul for the mold.

Wow! Prince Allura's head looks so soft, almost as if Mattel sculpted it out of Play-doh.

I would maybe settle for one of these things. Point is, I don't own a Voltron and I'd like to :s

These lions are not THAT bad, yet. I don't HATE them.
I've been super lucky with paint apps and sturdy construction. I will hate them if the Black lion comes, is plugged into the rest of the lions and falls apart...

Looking at the gravity-based rectal recepticle "engineering" of the yellow and blue lions, I may have an interesting video to post come early November. I live in a condo with a balcony...