Like it or not, this character is now a part of the kaiju family. If you didn't accept him after the initial movie, you almost have to after he appeared in Final Wars. And since he's now officially a Toho kaiju, I guess you need a toy of him. And for me, there's no better way to get one than to get a cheap, blow molded knockoff. 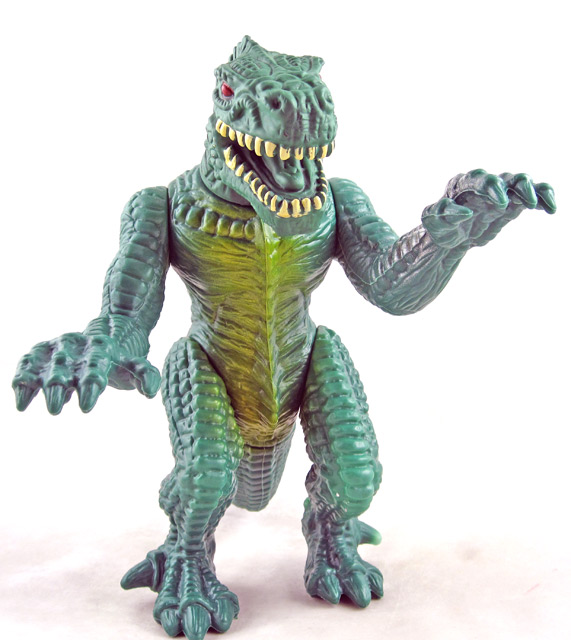 I saw this guy up on Ebay a couple months ago and decided it was worth it to grab him. It wasn't a lot of money and besides being blow molded, the toy is interesting because it's origins seem to be unclear. At 9" tall, it's standard vinyl size and it's sculpt is more vintage looking than you would expect from a toy of this guy.. yet there appears to be no pre-existing toy that it is knocked off from. Where the hell did this come from? 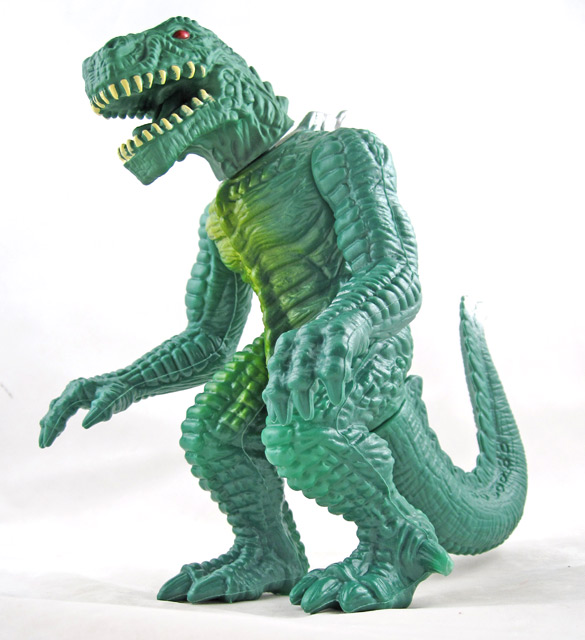 The head, tail, arms and legs are all articulated, but the head is made out of rubber, unlike the rest of the body. This tempts me to think it was made in Argentina since I have a Dracula toy from there that is blow molded with rubber arms and the old Supersol Ultraman kaiju were blow molded with rubber heads, but that is 100% pure guesswork. There is some somewhat sloppy paintwork on the teeth, but overall it serves it's purpose. There is also some silver spray on the fins, tail and the left arm. None on the right arm, oddly. There is also yellow spray on the stomach, but moreso on the right side than the left. Clearly, symmetry was not on the minds of whoever made this thing. 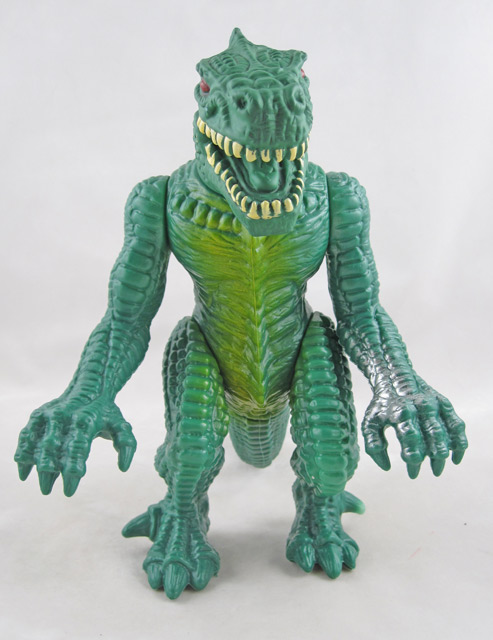 Despite that, I think it actually displays nicely. Right now, I've got him next to that ugly blow molded Mexican King Kong that I got awhile ago and the two compliment each other surprisingly well. It always amuses me when you buy two toys that have nothing to do with each other and you're not thinking of them as a pair when you get them, but they somehow mesh.

Of course, you could see from the preview pic that this guy comes not only in green, but in black. On the black version, the spray on the chest is greener and much more evenly applied, yet the silver is missing entirely. Note also that the head does not match the body quite as well as it does on the green version. 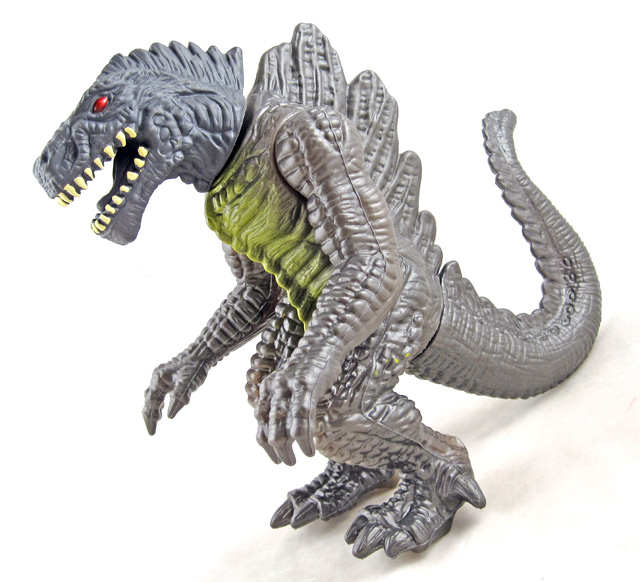 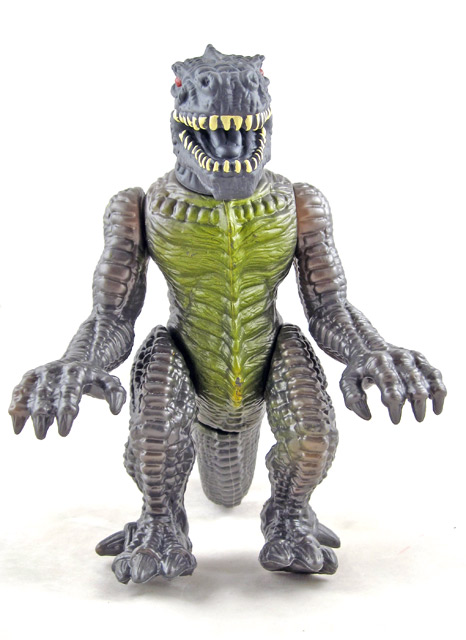 In fact, the guy that I bought these from told me that he also used to have a brown one. As cool as they are, I doubt that I will spent much time actively searching for this last variation, but I wouldn't be averse to having it if one fell into my lap for a cheap price.

I actually dig this a lot. I've gained a lot of newfound respect for this design through my kids. They want toys of all of the kaiju in final wars, and to them, Zilla is just another kaiju. They don't care about the crappy movie, why should I?

The movie wasn't as bad as people say. The little 'zillas were awful, and the female lead couldn't act her way out of a paper bag, but there were some genuinely cool moments. We rewatched it recently, and it held up fairly well for such old CGI. I really like Godzilla's design in the movie, too. I regret selling my toy of him in a garage sale years ago.

The movie's effects do hold up well. I still have my original electronic Zilla next to all the other real action Godzilla mods. Trendmasters I think.

Oh, quite true: the movie wasn't as bad as people say. It was about a thousand times worse!

Are you serious? It was three hours of crime-against-humanity.

I'd rather watch Godzilla's Revenge a hundred times in a row.

I actually own Godzilla's Revenge on DVD,yet not this. Need I say more?

Never saw the Hollywood Godzilla film. Life is too short to waste on bad-bad movies. When it came out I got a VHS copy of CARNOSAUR instead ("It's better than Jurassic Park!") and still do not regret that choice.

Yeah, I tried to like the US Godzilla, but just couldn't. I've never seen Carnosaur, although I do hear it has quite the cult following. Should watch it one of these days.

This is by far the coolest thing that is in any way related to that bucket of feces of a movie. Especially the green one -- it has a cool Bullmark look to it.

Now all we need is for you guys to accept how awesome the Cloverfield monster is. :D

I have no problem with the Cloverfield monster and even less with the movie, which I thought was great. I just don't think the monster would look good in my collection, so I never bought the toy.