When jumbos from Venezuela were first introduced to the jumbo collecting community, it was a true revelation. No one had heard of jumbos from that country before and among the ones that were discovered was this completely bizarre Frankenstein-type toy. 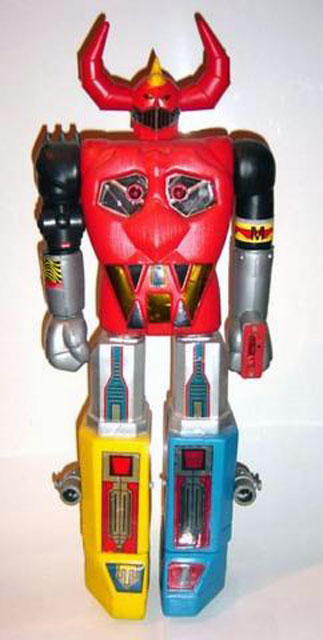 What we're looking at here is a toy that pieces together parts from different characters from the Shogun Warriors line. It features the head, body and right arm of Gaiking, the left arm of Dragun and the legs of Daimos. Each part has been recolored. The red body and head of Gaiking in particular look really cool, giving the toy a certain demonic charm. 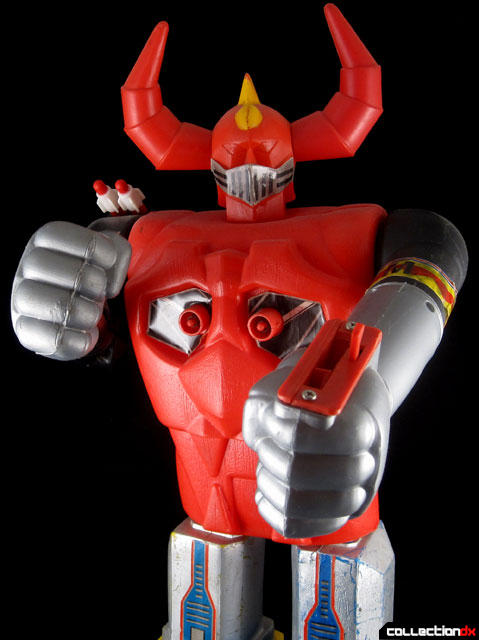 You may also have noticed that the colors on the legs look familiar. Although it was not a part of the Shogun line (at that time, at least), the legs are colored after Voltron, although the colors have been reversed. Actually, the fact that these colors were used make me think that this toy was likely released a few years after the Shogun line since Voltron hit it's peak in popularity around 1984 or so. 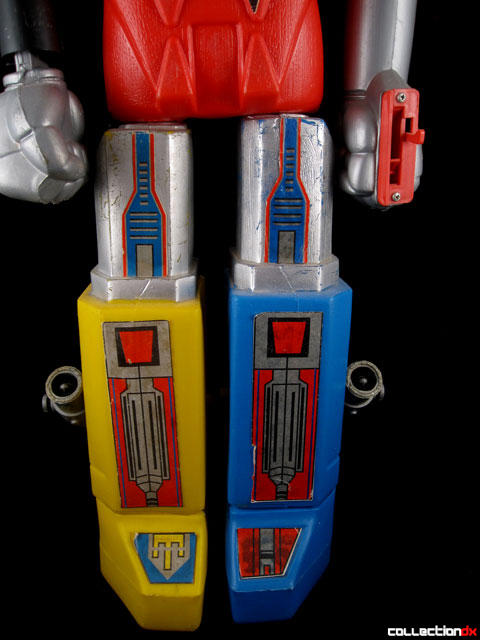 Each leg is molded in yellow or blue and then the hips were painted silver. You can see plenty of paint chipping in this area, since we all know how difficult it is to get paint to stick to polyethylene. 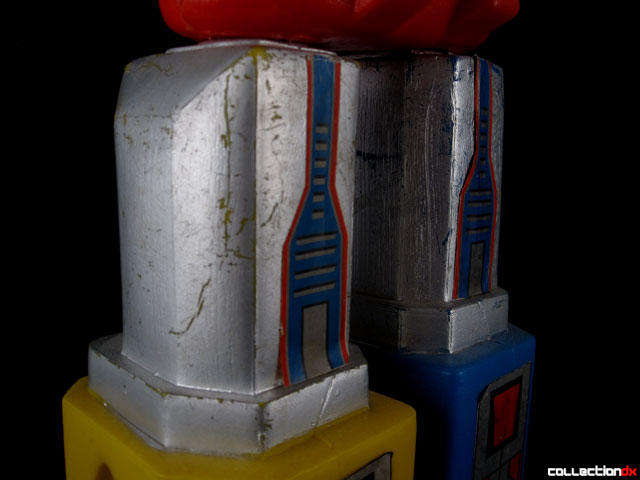 Since this toy cobbles together many pieces of other toys, each part retains the originals weaponry, resulting in a robot that is armed to the teeth! The right fist shoots, the left one throws axes, the chest shoots missiles and the legs shoot bigger missiles. Talk about an armory! And let's not forget the wheels on the feet.

Initially, many of us were actually somewhat skeptical that this was even a legitimate toy and not some strange custom being passed off as the real thing. But although it's very rare, over time more specimens would appear and it's authenticity would no longer be in doubt. 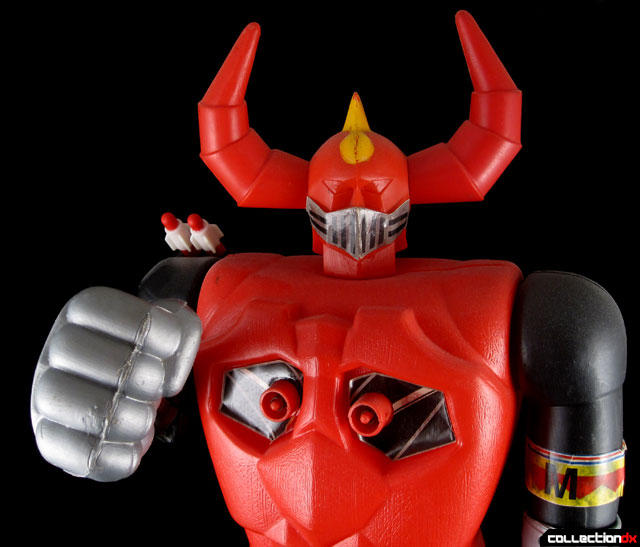 I was lucky enough to acquire my specimen from my friend Juan Carlos of Figuras de Accion (who also owns the first specimen seen, pictured in this review). Unfortunately, it was missing several stickers and the cuff for the right fist. Although I have a file for the stickers and could probably replace the cuff with a re-painted one from a Shogun version, I just can't bring myself to do it since I am adamantly opposed to reproductions parts.

I've never seen any packaging for this toy so I don't really know exactly what it's name is supposed to be. Some call it the hybrid Gaiking, or red Gaiking. Furthermore, I've been told this was released by Famosa, even if we haven't seen that packaging. It would seem likely to be true since this is the only other jumbo from Venezuela besides the ones from Famosa that I've seen that was made with such thick, rigid plastic. All the others I've seen have a much thinner, more flexible plastic. So unless information comes to light to dispute that, that's what I'm going with. 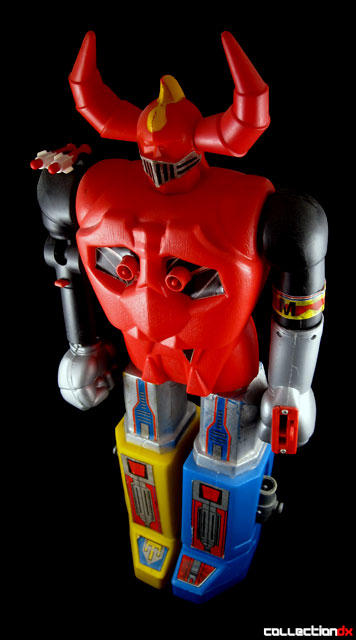 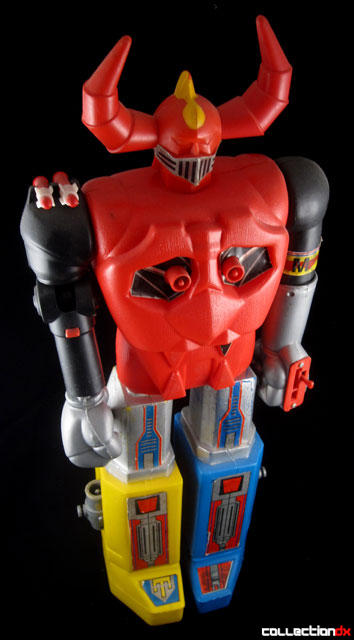 Nice review, I really dig the red/black color scheme too bad they didn't apply it to the legs.

It's interesting, you say Voltron, I think Megazord. Still, it's like the first bootleg built from leftover bootlegs I've ever seen!

Oh crazy, I thought voltron at first too but it's looking more and more megazord. In that case maybe it came about around the time of zyuranger?

I suppose anything is possible, but frankly I'd be shocked if this was made in the '90s. They just weren't making jumbos in that decade as a rule and all the other jumbos from Venezuela are known to have been released in the early '80s.

It was made to correspond with the Venezuelan Spanish dubbed airing of Zyuranger (circa 1992), Not Power Rangers from the mid 90s. Bootleggers reused the earlier Jumbo mold (Or recasted their own molds from official production figures) for this one-off release in the early 90s. Originally came bagged with a header card that features Zyuranger artwork.

This is also one of only a handful that are known to exist. Very rare!