Blitzwing: belligerent, icy, and crazy.
These three personalities do not make him the best warrior, but they do make him the most unpredictable. Blitzwing is a powerhouse on the battle field and a most interesting combatant with his ability to change into one of three forms, not the simple choice of two that his fellow compatriots have. To each battle he adapts, and each battle he rules.

With this, Hasbro gives us the 30th anniversary Blitzwing from the animated television show The Transformers. Part of the generations line, Blitzwing is a massively updated version of his G1 counterpart. With a few flaws and awesome sculpting, Blitzwing should please any and all fans.

Packaging:
Blitzwing comes in an open-faced cardboard box with some really nice art on the front. Blitzwing peeks out from inside as if he were frozen in stasis. 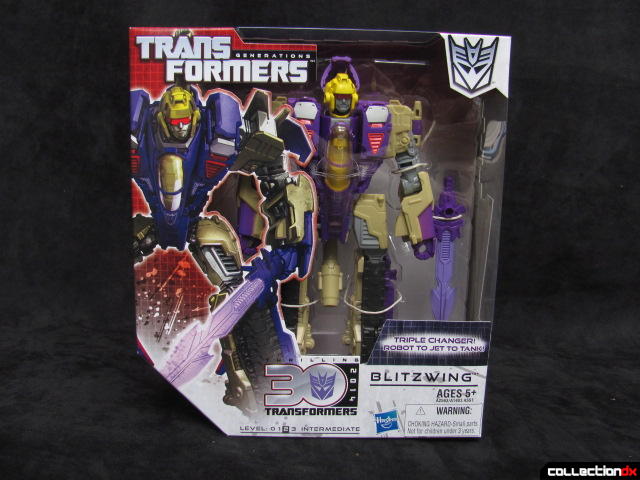 The back covers the stats, bio, and AKSHUN FECHURS of the figure. 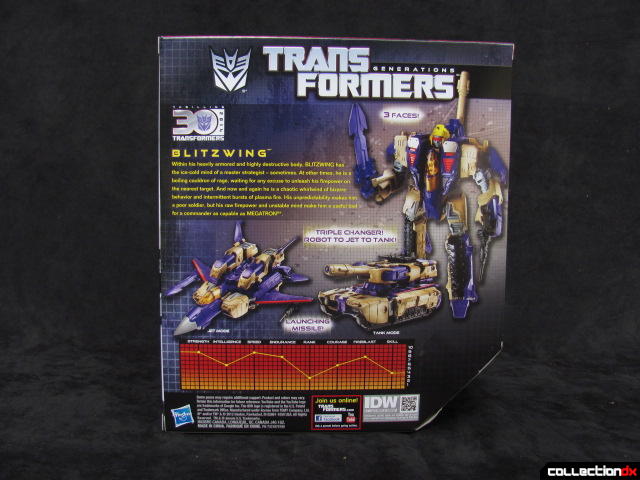 Aesthetics:
Blitzwing is a stunning toy. The colors are bleedingly awesome. The purples work so well to offset the army tan and give the whole toy a presence all its own. The yellow helmet stands out like flag on the peak of a mountain, a purple and tan mountain. The red and silver splashes add a nice interrupt to the otherwise all encompassing purple and tan. 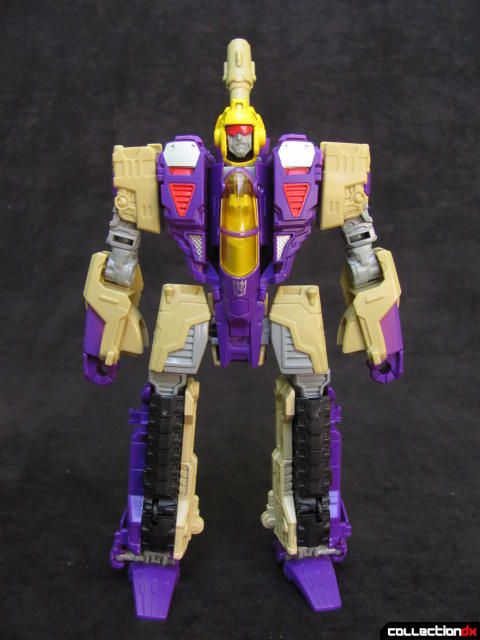 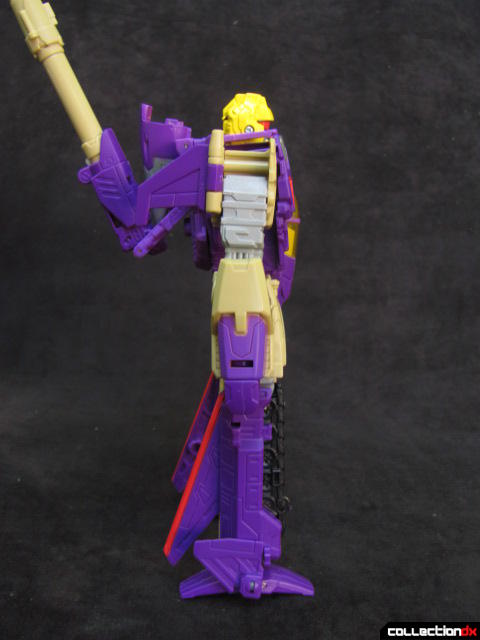 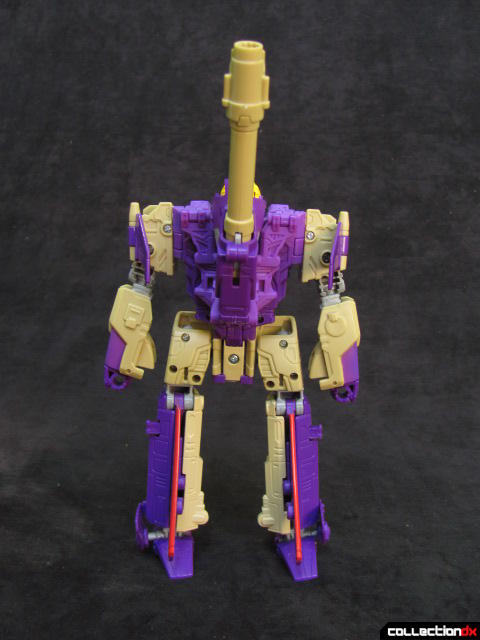 There are a lot of sculpted details on Blitzwing. From treads to air ducts, bolts and grooves, he is quite the sculpted display; he is utterly covered in subtle and overt grooves and channels, and it gives him a lot of depth and presence. 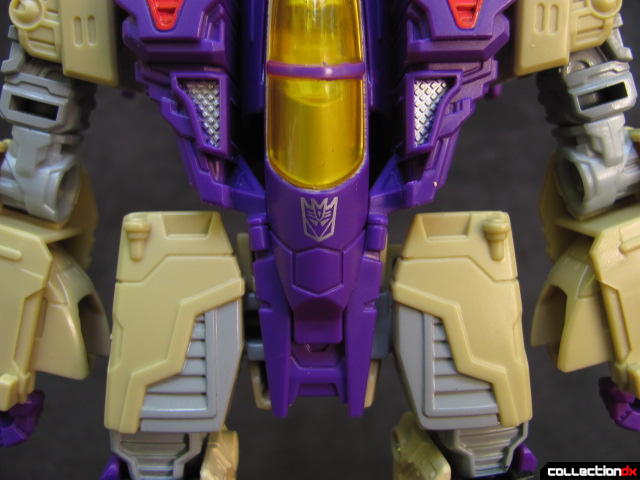 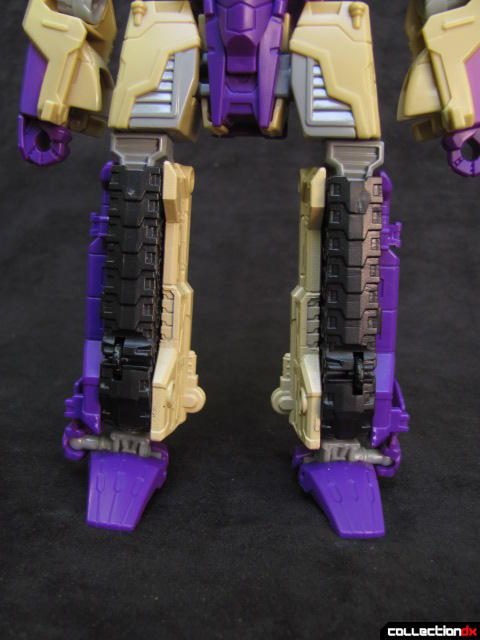 The robot mode is very clean with only a nose-cone and tank turret on his back; everything else is tucked away and serves a purpose. Blitzwing’s robot mode also promotes both of his alt modes quite well. The same can be said about his other modes, as well.

Firstly, the Tank.
A stumpy and rather unappealing mode, the tank is a squat little thing. It looks good and, well… tankinsh, for lack of a better word, and is very compact. This mode shares all of the aforementioned detail and colors. This mode is a little gappy; depending on where you look at it there can be plenty of open spots in the mode, most notably the turret. 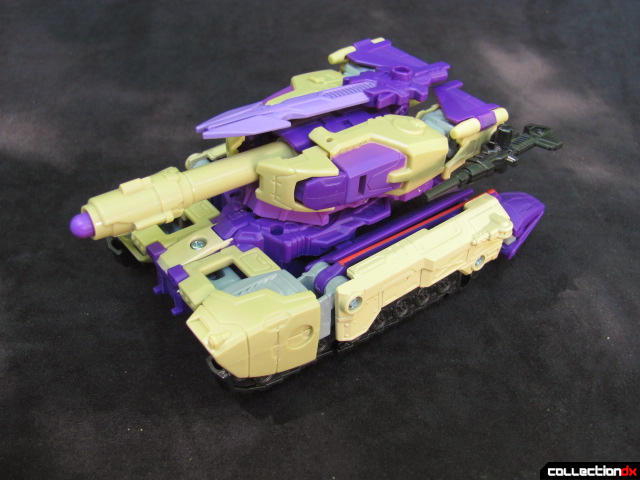 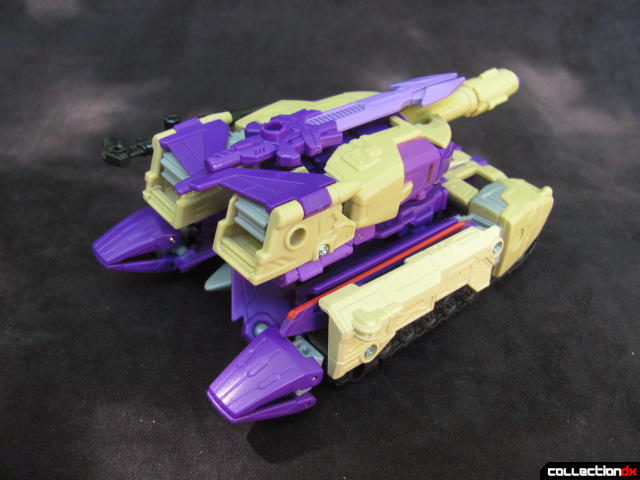 This mode stretches about 5.5 inches long. 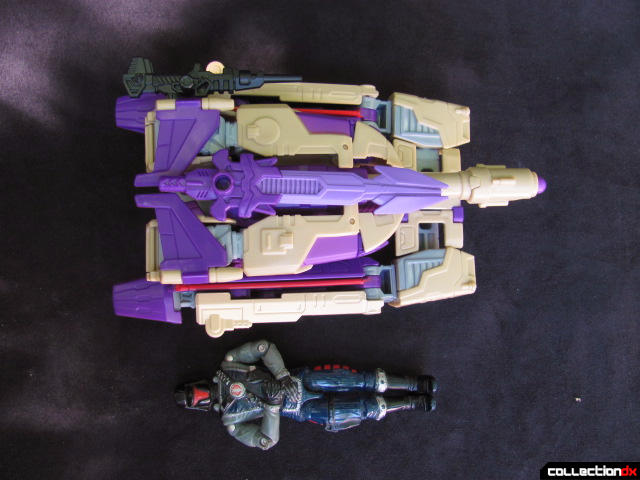 Next, the Jet mode.
This mode is a little more expressive than the tank with its shiny cockpit, but it also suffers from the same problems i.e. the gappiness. Still a rather fun and believable alt mode, however. 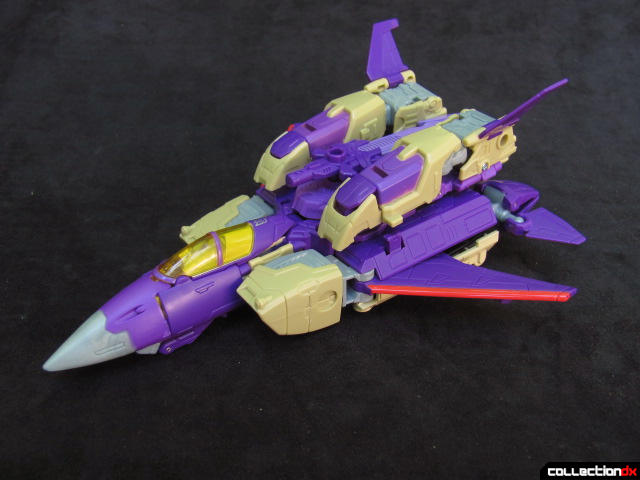 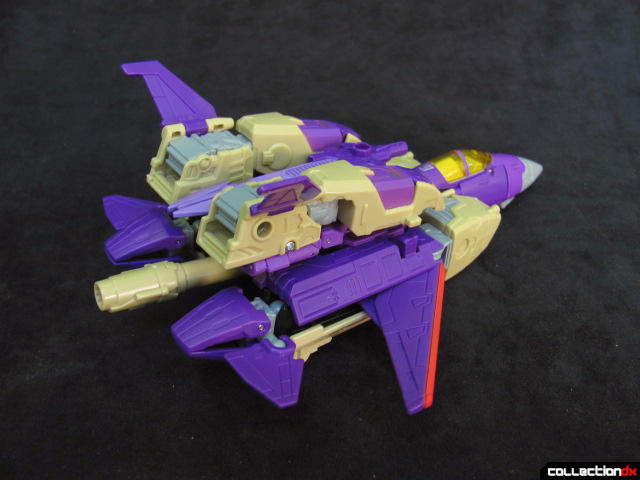 This mode is about 6.5 inches long. 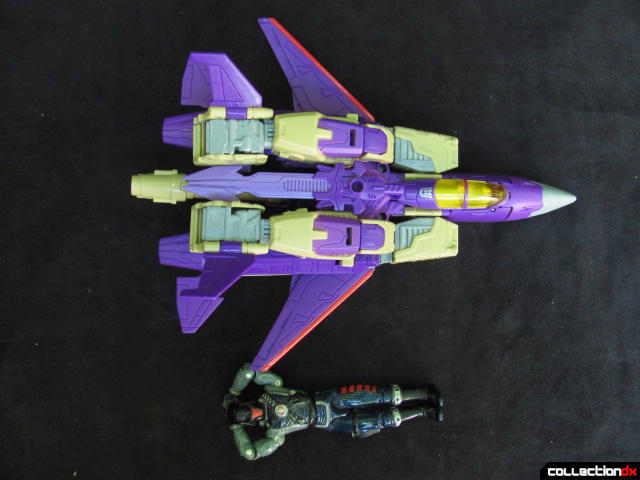 Overall, all three modes look quite good. The problems I have mentioned really only come from the fact that Blitzwing is a triple changer. There are going to be problems indicative with this adventurous design; however, though that may be true, each mode looks great and separate from one another (both alt modes do not indicate the other) and Blitzwing’s robot mode encapsulates both aesthetics.

Articulation:
Blitzwing moves very well for a stocky brick of a guy. He has universal hips, knee joint and swivel, slight ankle tilts, neck swivel, universal shoulder, elbow, and wrist swivels. He does not sport a waist, but for his design, this is forgivable. 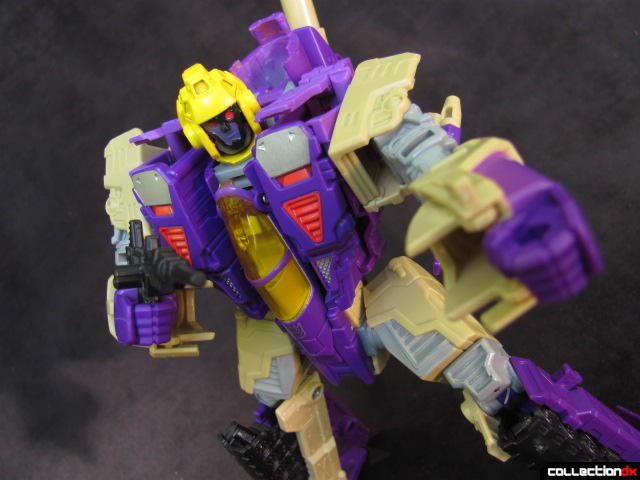 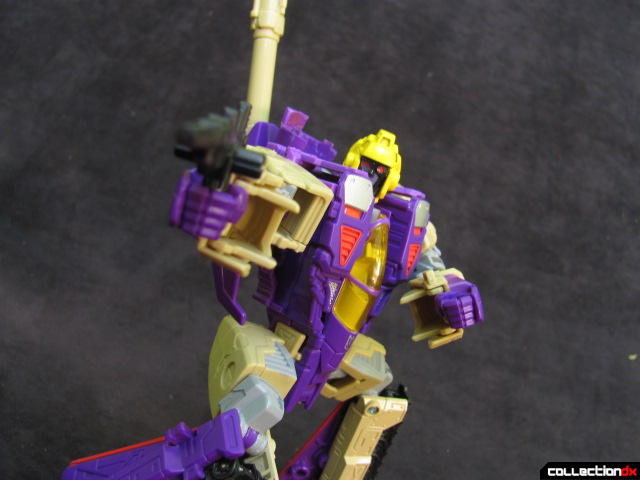 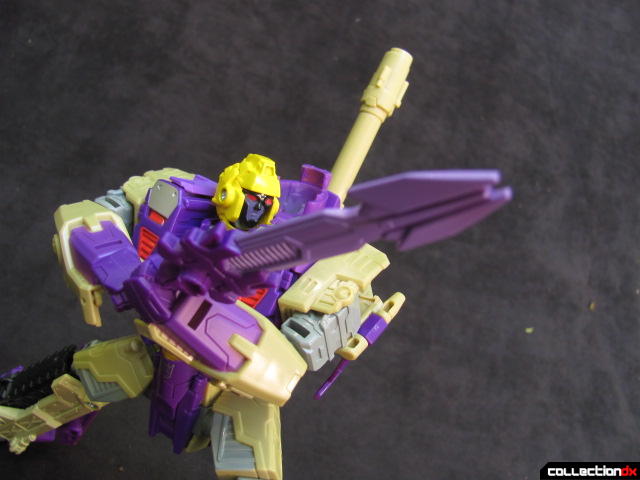 Blitzwing can be posed quite expressively.

This is a very important point for all you tank aficionados out there:
Yes, Blitzwing’s tank turret does turn, and a whole 360, too!

Blitzwing stands at about 7.5 inches tall (turret not included). 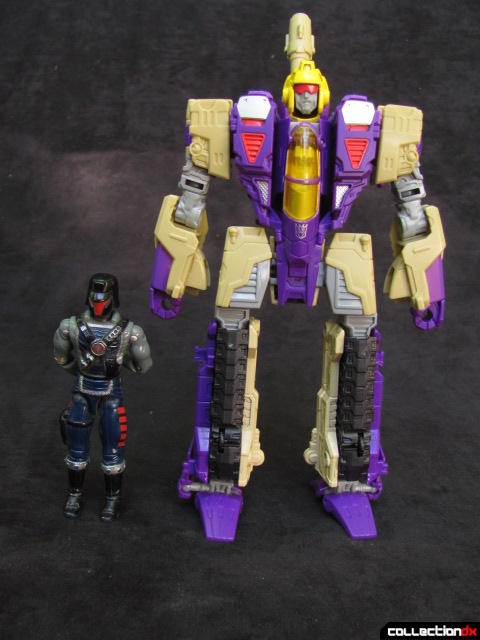 Speaking of the turret, I wish it could have gone someplace else, like over his shoulder, for instance. We’re left with either pointing it straight up like an antenna or pointing it down like a willy. 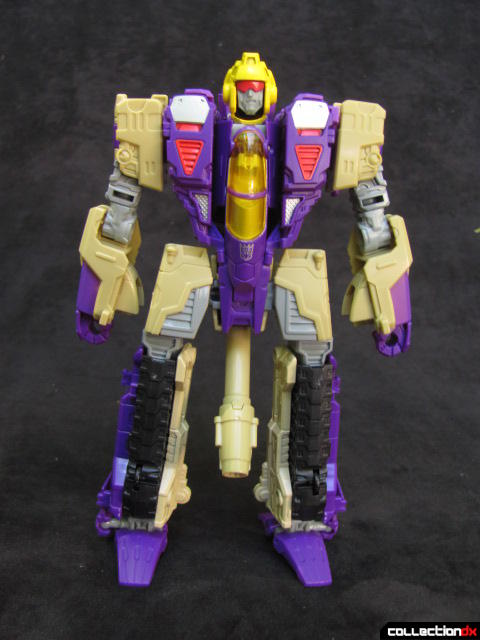 It’s not too obtrusive, so I can’t really fault it for that.

Accessories:
Blitzwing comes with three things:
- A gun
- A sword
- A missile 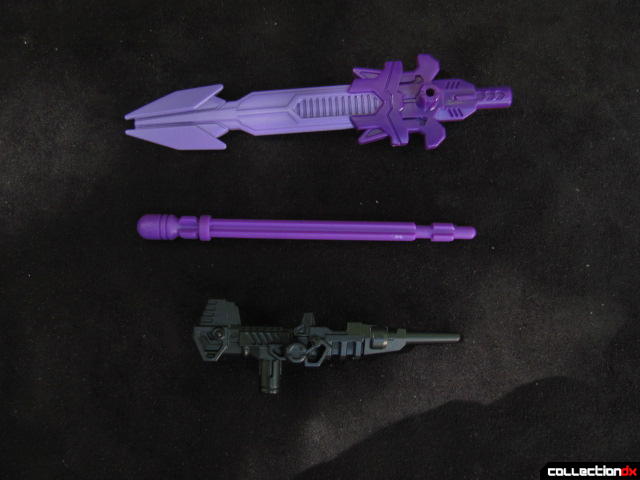 Each are held in hand quite well and look great as well.
I especially like the shade of lilac his sword is in; so silly.

Gimmicks:
As a transformer, Blitzwing can *gasp* transform!
This transformation is interesting and very tab-centric. It works well and is pretty fun when you know what you’re doing. The first time was a little confusing, but afterwards it’s intricate and well engineered.

There are a few flaws in his engineering, though. The tabs that connect his treads to his hull do not tab in correctly; the grip of the slots is not high enough for the torque presented by his legs; however, another tab on this connection keeps the legs secure.

His nose cone is also a point of contention. It’s made out of rubber; though this wouldn’t normally be a problem, it doesn’t close well nor sit well. It’s a pain to close as it grabs onto the paint that covers Blitzwing’s head and doesn’t peg well with the canopy. Blitzwing’s head also receives paint transfer upon every transformation. 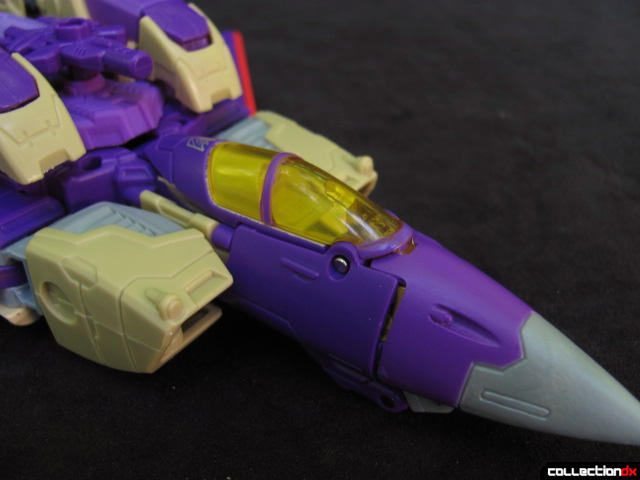 Also, his shoulders do not peg in very well. This is due to his chest being too deep and his locking mechanism not being long enough to catch correctly. Now, this is not a problem with every Blitzwing; some people have secure shoulders (my right should is snug). But please be aware of this problem (though it’s not really a deal breaker).

Another gimmick of Blitzwing is his ability to change faces: 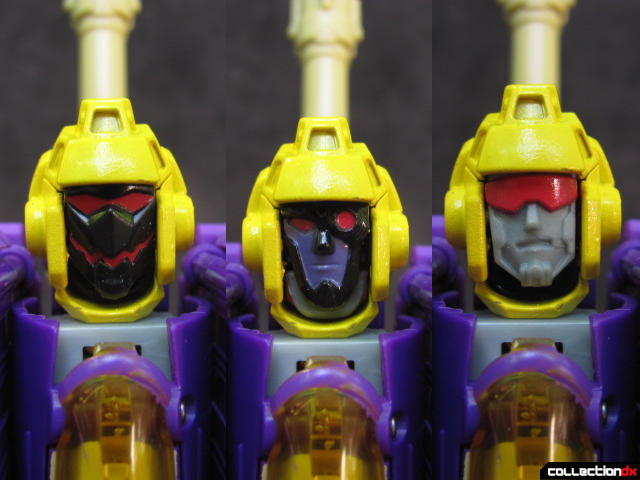 This is achieved by flipping the combo-face up into the helmet to reveal the next one. It works well but is a little taut at first. All three look great but are a little flat in sculpted depth and a tad sloppy in paint.

Closing Remarks:
Blitzwing is a stunning toy. From his weighty presence to his garish paint, from his interesting transformation to his equally interesting gimmicks, he is a well thought out and well done figure. He's big, solid, and pleasing to look at. Though he suffers from a few transformation foul-ups, he does not suffer in the playability and awesome department. This is the Blitzwing we’ve all been waiting for, and it was worth the wait. I recommend this toy.

This is one figure that has put me on the fence.

I love Blitzwing, always dreamed of this toy. However the nosecone and somewhat loose shoulders always turns me off when I hear it.

Considering my budget is enough to get only one voyager for the meantime. I'm torn between the BH Prime, BH Shockwave or this, simply out of pure love for Bltiz.

I'm pretty sure that was on purpose, as you are right, it looks just like it.

I never thought I'd see the day! QUICK! SOMEONE TELL ARAMAKI!

Looks pretty good! I'm a little disappointed with the chunkiness of the plane fuselage, and the massive amounts of visible purple breaking up the tank - it would be nice if at least the turret was solid tan - but I suspect I won't care so much when it's in my hands, as it seems to have a lot of play value.

One question: Is the sword necessary to hold those two "boosters" on the back of the jet together, or is that just optional storage?

That's somewhat optional storage.
You see, the sword is attached there to cover up the biggest gap you can imagine.
So, you don't have to put it there, but you should.

Great review. It makes him seem more worth it now. What have you tried to do to fix the shoulder problem?

Thanks, mate!
And Blitzwing is totally worth it; I mean, does having to exert an extra 1/2 Newton of force to pose his arms really detract from the fact that this is still an awesome toy? I think not :)
And as far as fixing said shoulders goes, I haven't tried anything personally yet, but I'm sure there are multitudes of threads about that topic out there; I may even try some myself.

I am the world's biggest Blitzwing fan and I wanted to love this thing so hard, but I can't. I'm more excited for Springer than this thing.

I've heard so much about the annoying shoulders, but DANGIT I love this thing! I don't think the problem with the shoulds will be able to keep me away. Hopefully they don't bother me.

Now on a side note: You gotta show me the rest of the picture from whence your avatar came! No one ever pays attention to the Ice Cream Soldier.

The loose shoulders aren't really that bothersome. I mean, yeah, the pop up when you move the arms sometimes, but Blitzwing is still a great toy. There are also many, many threads and videos upon how to fix them if you so desire.

Also, my avatar was drawn up by Josh Bernard himself as part of the Indiegogo campaign that I helped fund a portion of. This was part of my award; I just colored it in fireworks upon receiving it.:
http://i.imgur.com/d99J4r1.jpg

Sounds good! Honestly this figure is right up my alley so I knew nothing was gona stop be from buying it. I saw some of the fix ideas, but I dunno if I like some of the risks. BUT...might as well wait until I have it in-hand.

Anyway: That pic is awesome! I'm honestly surprised that Ice Cream Soldier hasn't had more attention. I've got to fix that.

There's actually a "fix" to the shoulders by just adjusting the transformation without having to do any modification. Take a look at Peaugh's review here @ 12:04