Season 2 of Mighty Morphin Power Rangers brought a lot of changes to the show. There were new characters, Zords, vehicles, villains, etc. Right now, one of the changes I will talk about is the addition of the shark cycles. Also, in the show the Black Ranger for season 2 was named "Adam" so I will refer to him by that name since this set was released around the time season 2 of the show was aired. (Of course, all of us die-hard fans know that Zach is will always be the original Black Ranger) 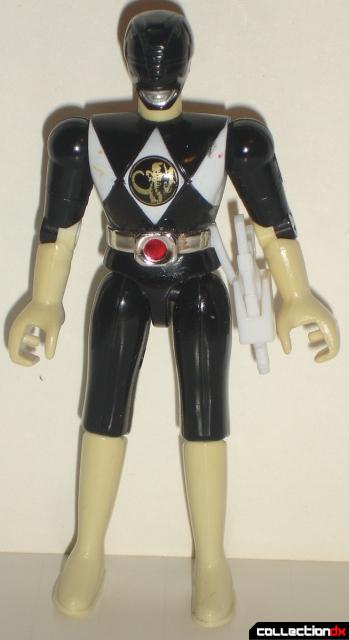 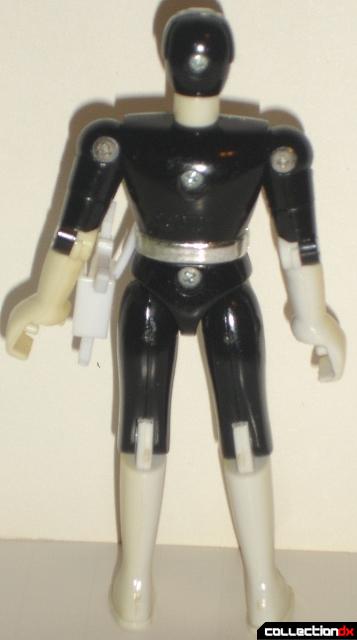 The first thing I want to say about this figure is that on the back the copyright year is '93 but on the shark cycle the year is '95. How can this be possible for a brand new figure fresh out the box? It's simple, the Ranger included is the same exact mold that came with the original battle bike set that was released 2 years prior. A small detail like that is not something you'll easily find unless someone told you about it. Unfortunately I couldn't get a clear enough picture of the copyright year, but it is there. 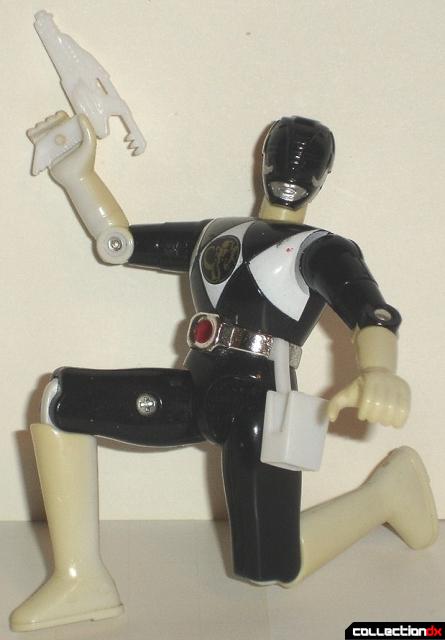 Adam comes with only one accessory: a blade blaster cast in white. Both of his hands has pegs that insert into the hole on either gun or the holes on the shark cycle's handle bars. Adam has 7 points of articulation, which I assume is standard for a 90's action figure. Not nearly as much articulation as the figurarts version, but you can still put him in some interesting poses. 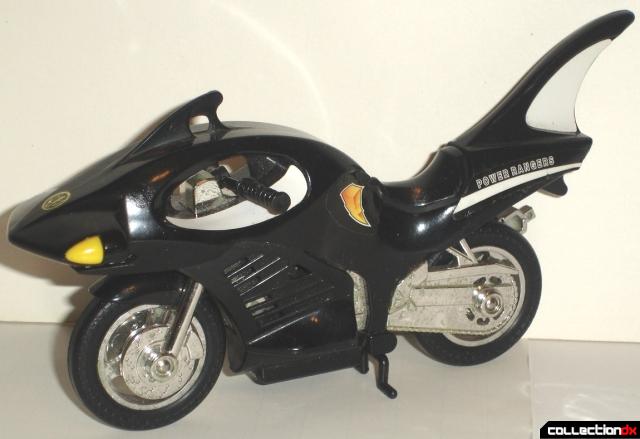 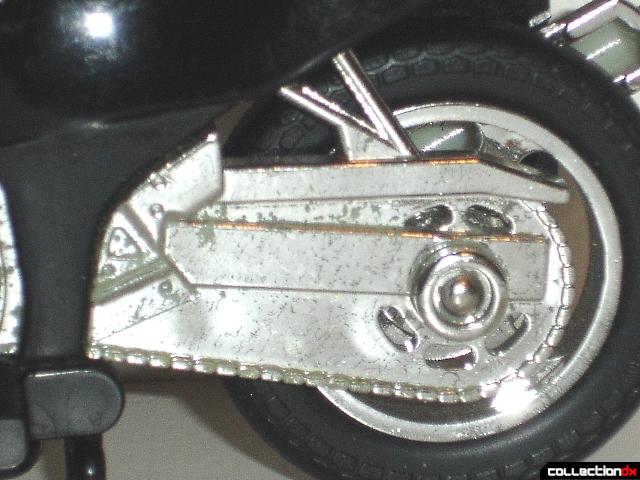 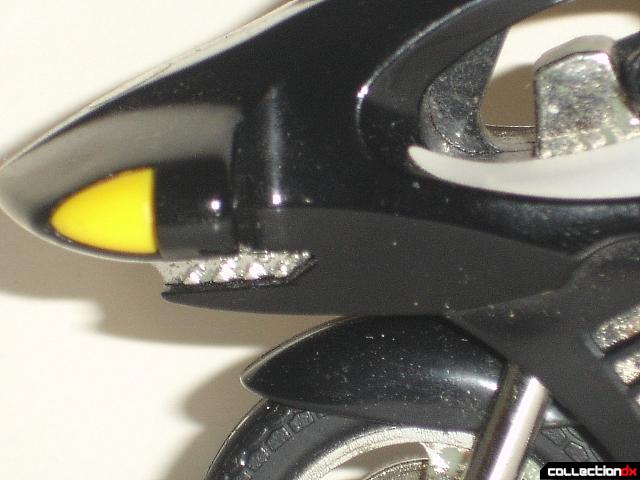 The shark cycle is very beautifully detailed. Even though the colors are black, white, and silver with a little bit of yellow for the lights/eyes, I think the simplicity works very well in it's favor. Both of the wheels spin freely and there's a kick-stand to hold the bike upright. 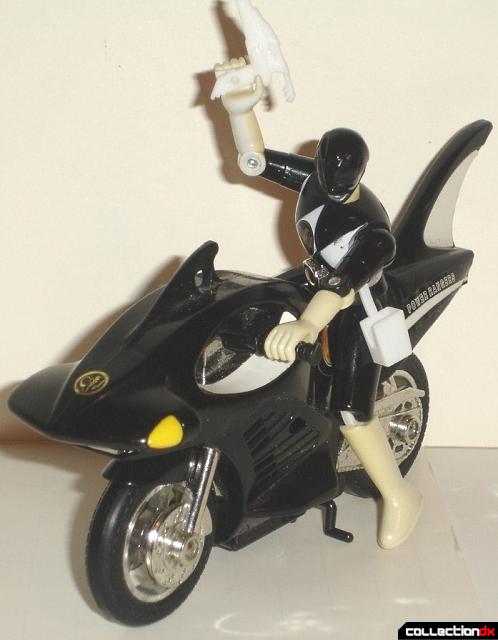 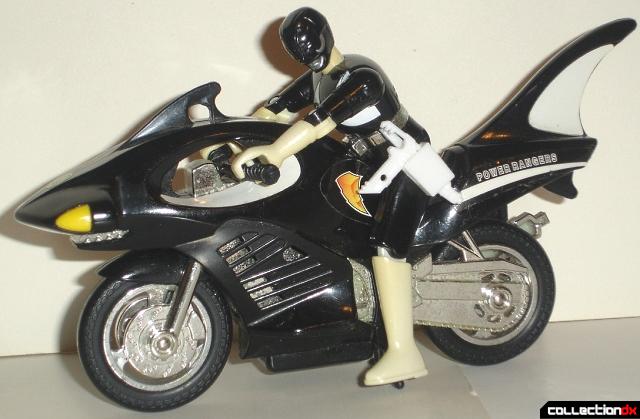 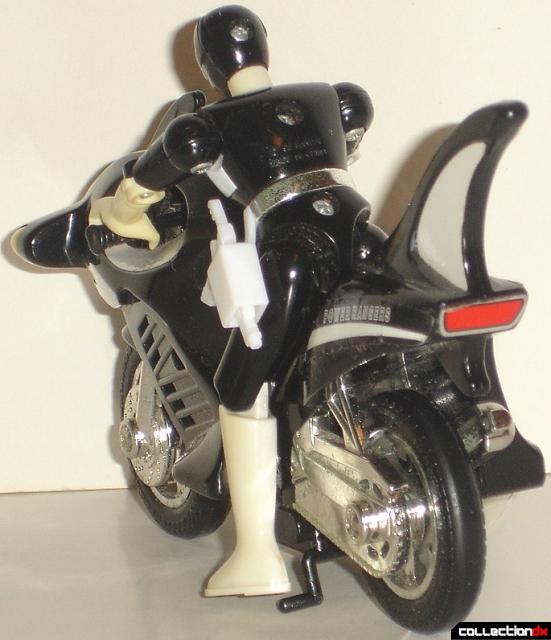 And there's a little secret about the shark cycles that many of you may not know about. In the Japanese show Ninja Sentai Kakuranger, the protagonists used shark cycles, but there were only three. When the shark cycles were used in the MMPR toyline, some were repainted. There was no black shark cycle in Kakuranger and I like hammerheads so giving the black ranger this particular shark cycle was a win-win situation. I assume that all of the weapons/accessories are compatible with this version since it's only a palette swap.

If you love and grew up with Power Rangers like I did and want something a little different other than Zords, pick this nifty little set up if you can find it for a good price!

4 comments posted
This is a blast from the

This is a blast from the past!!!!!!!
I have this only toy from MMPR...
I saw it and it was like a struck of nostalgia...
It was a very cool action figure from the 90's having way more articulation than most of the figures of that era, and a cycle with very nice details, that you only could find in scale models...

Glad I could bring back some good memories for you, bud! I have a few other Power Rangers reviews on my page that you may be interested in so feel free to check them out! :-)

Ahhh maaan, I wanted one of these bikes SO bad, when I was a kid! Mostly for the non-headflip figure that comes with the bike. I liked the proportions on these guys better. Still: That's one sweet bike! It's too bad I never managed to get one.

They should be cheap and easy to find online nowadays. If you're just looking for the figure itself sans the motorcycle, I'll bet a dollar to a dime that you can find one in a random Power Rangers lot on ebay.