"He who becomes Dominus of Big Fau becomes ruler of the world."
Big Fau is the Megadeus of the Sea, a practical Leviathan if you please. Piloted by Alex Rosewater, Big Fau - being what he calls "the most powerful Megadeus" - is an instrument of rule, terror, and prestige, a way to make the city of Paradigm his and his alone. With this sacred chariot of mankind, Alex becomes the archetypal "God" of Paradigm.

With this, Max Factory has released - along with Big Duo - a giant soft vinyl of Big Fau, the third Megadeus is the Bandai/Sunrise show The Big O. Max Factory really did a good job representing the character in great accurate detail and scale.

The box that Big Fau comes in is a sight in itself. The front includes a giant shot of Fau with giant text shouting his name. 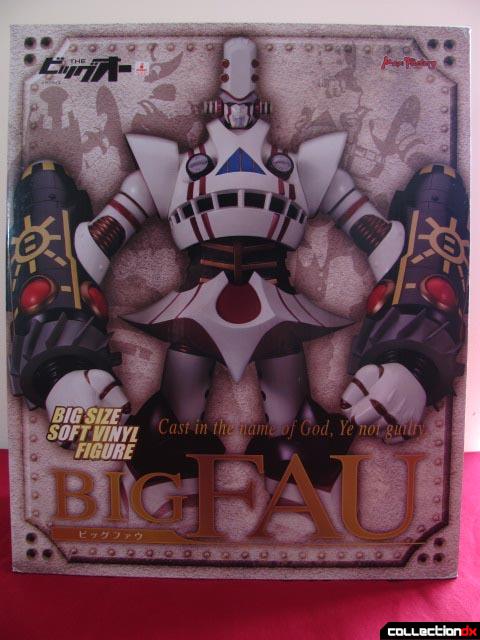 The side: armor detail and a nice silhouette. 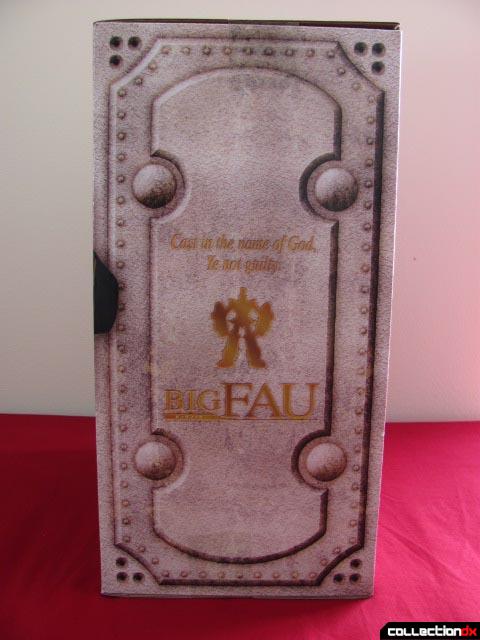 The back includes great pictures of the figure's details with a very nice splash of the show's tagline. The packaging looks great with lots of rustic detail and involved pictures. 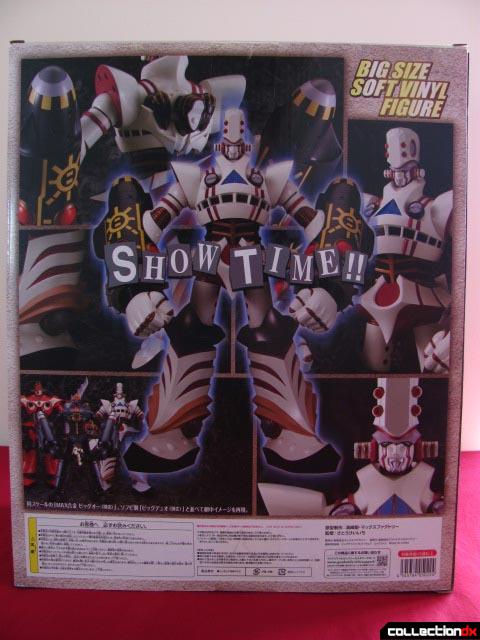 This toy is beautiful. I almost don't feel like I need to say anything else.

All the colors are beautifully rendered on this figure, and the paint-apps are, for the most part, clean and applied well. Fau's tribal tattoos on his arms are faithfully represented, and the slight maroon is a perfect "season two" shade. The white is also a nice, soft color that plays well with the rest of the colors. 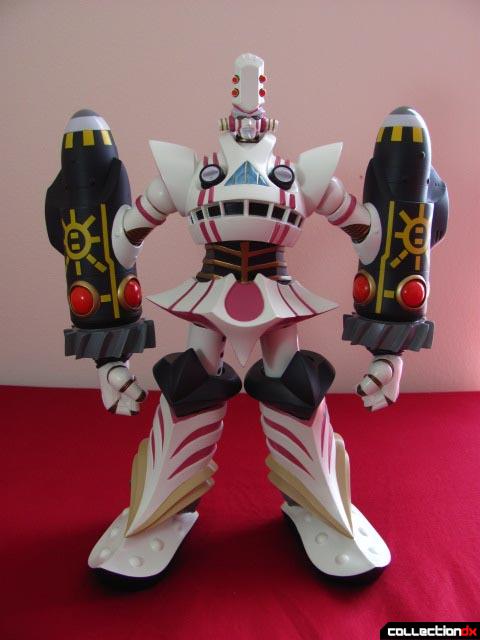 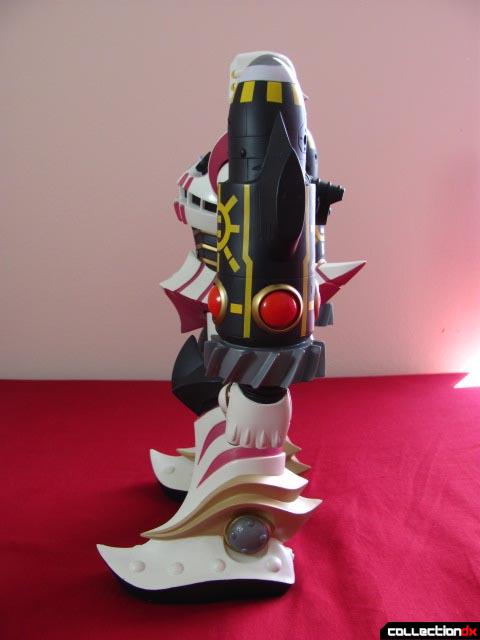 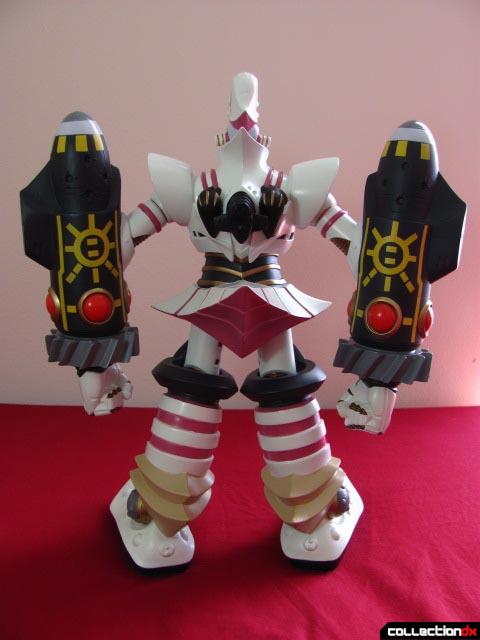 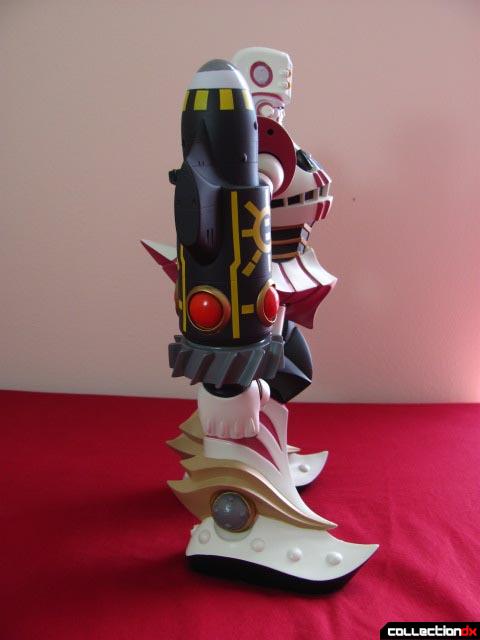 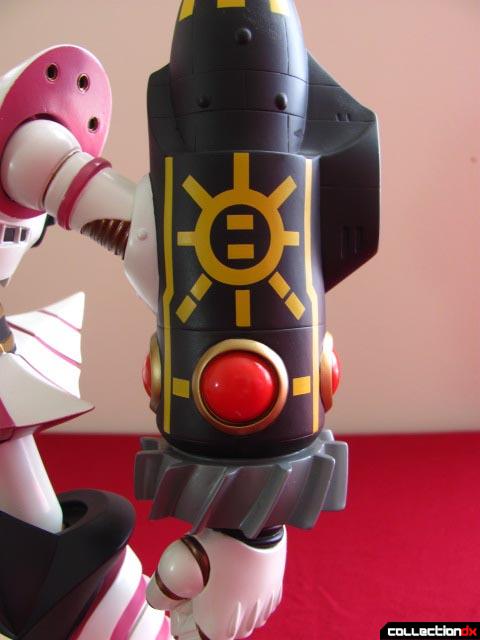 My Fau, unfortunately, suffers from two somewhat minor errors, both in the paint department: the face is smudged and the top of its head has a few small paint dents. This is a little aggravating, especially considering the price of the figure, but it's almost to be expected: vinyl doesn't always play well with paint. Though this is not a rampant problem with these figures, be aware that there may be a slight possibility of some rough paint apps on your figure should you chose to buy one. 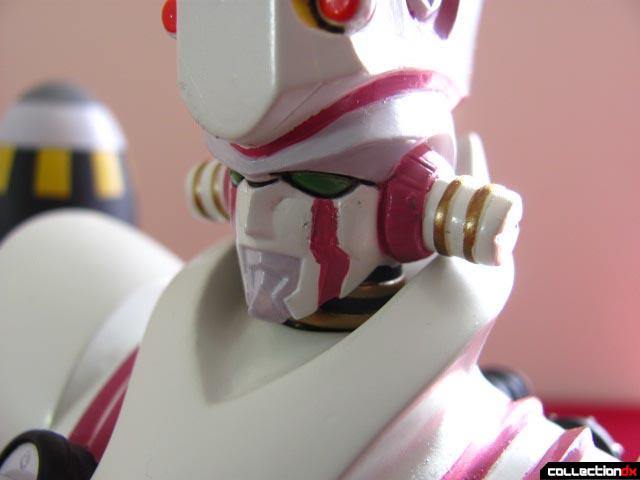 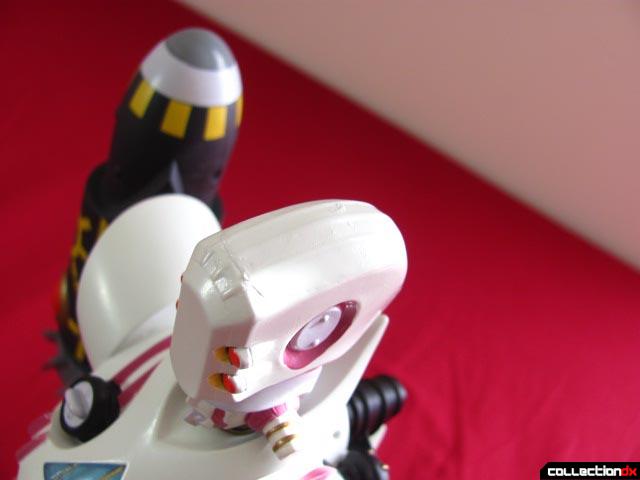 The Megadeus's sculpt is well defined with a multitude of great detail, all of which is sculpted. The gasket joints, razor cuffs, and beveled lines are all there and well constructed. 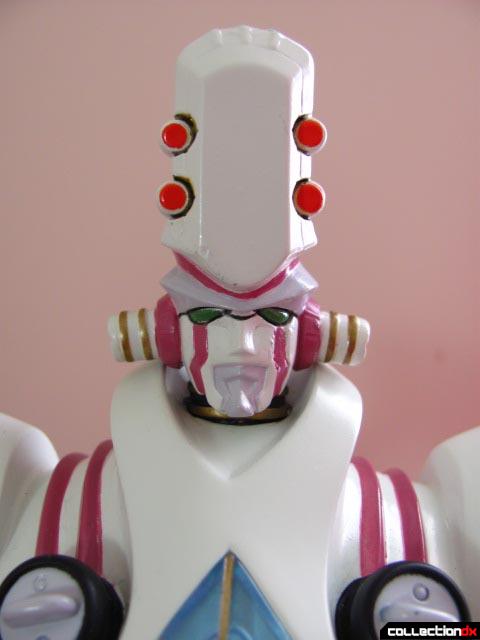 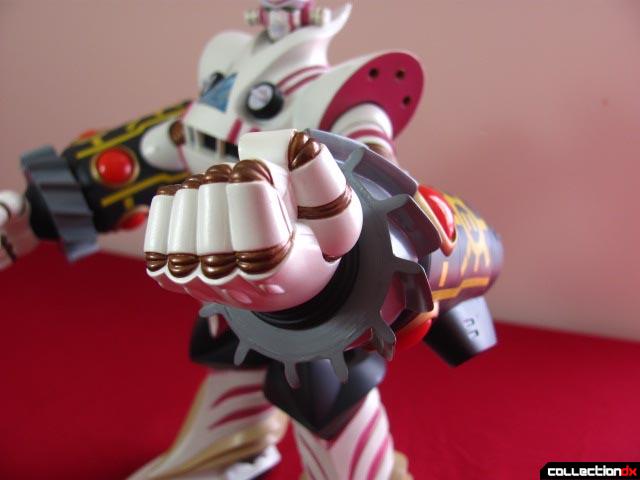 They even included the submarine tower on his back, something I had actually never noticed before when watching the show. 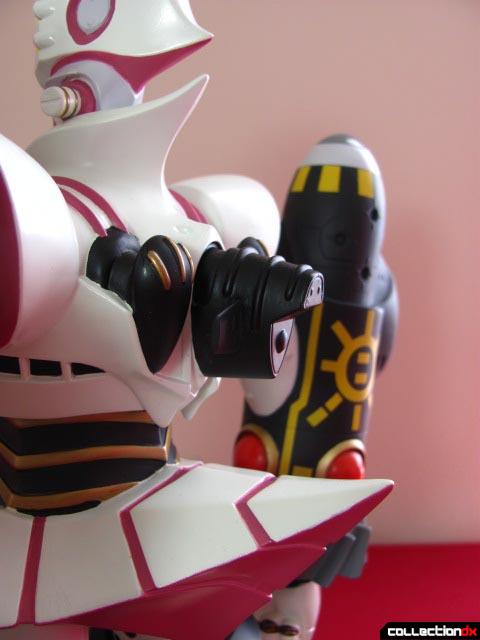 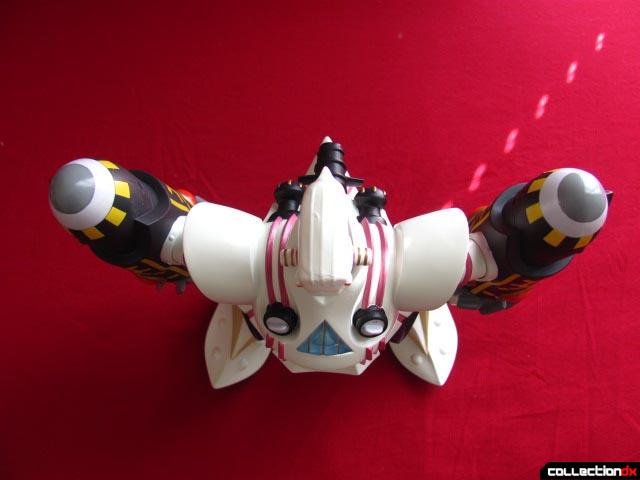 Being a soft vinyl, Big Fau really doesn't move a whole lot. It sports a swivel at the head, shoulders, elbows, wrists, thighs, and knees. When provoked, however, some pretty decent poses can be achieved. 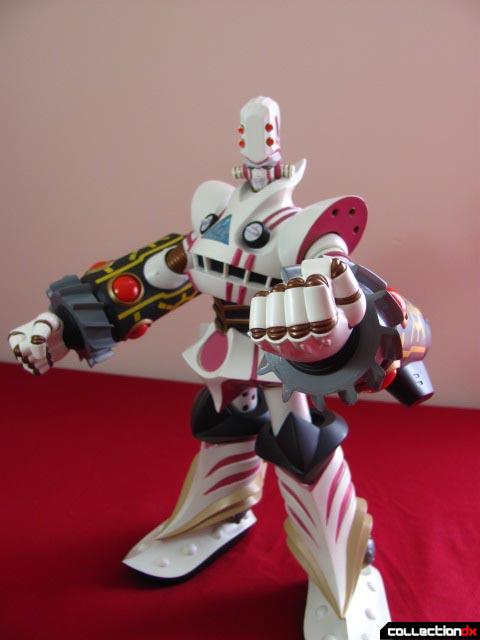 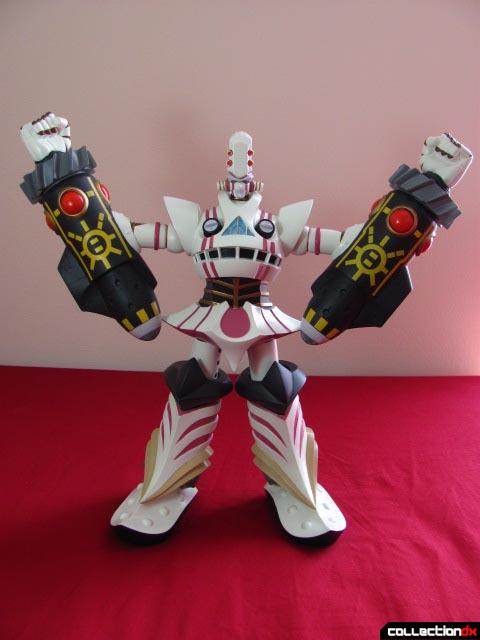 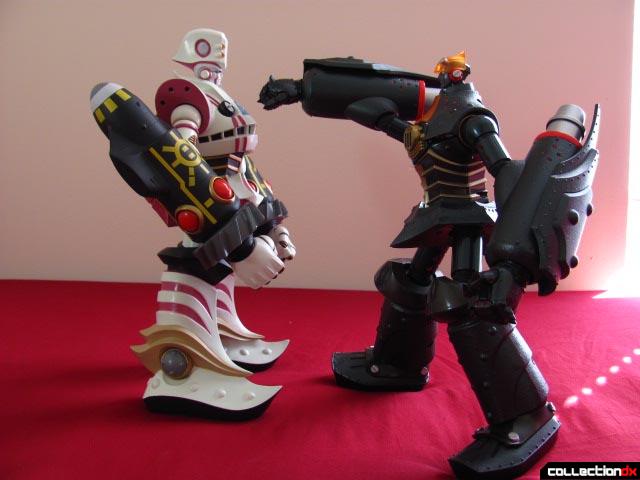 Hey! It's an iconic scene, and Big Fau's pose is right from it! 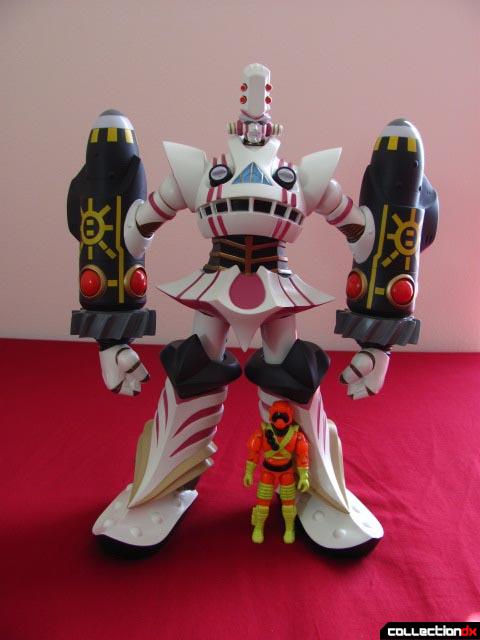 None. The only thing in the box is Fau.

This toy's gimmick is that it's huge. That's about it. Other than that, it's just a really awesome vinyl that sits there and looks good.

Max Factory's Big Fau is a very welcome addition to its line of Big O merchandise, especially since this is the first figure to my knowledge of Big Fau to ever be sold; we can now have all three Megadeī! The paint is average fare on a vinyl, as well as the articulation, and the toy looks fantastic. I cannot recommend this figure, however, to anyone who is anything less than adamant about his or her love for The Big O. The figure being a stark 12,800 yen can be a deal breaker to most, and it just being a vinyl may or may not warrant that kind of price. This figure is definitely not for everybody. If you love Big Fau and want this behemo... wait, Leviathan of a robot in your collection, then go for it. 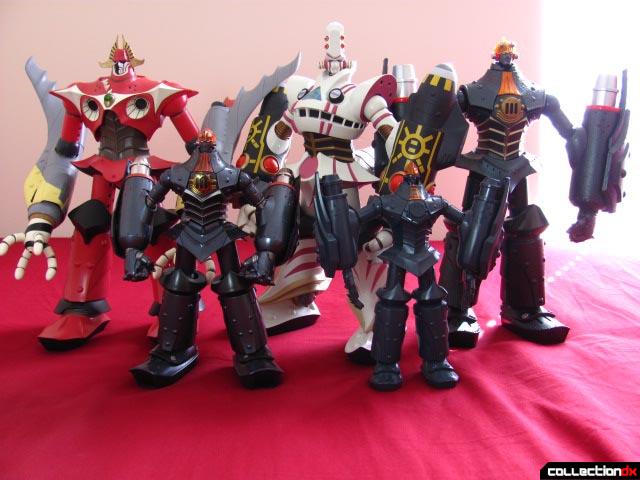 These pictures really make this toy look fantastic; I wish I could justify the purchase right now because I know the aftermarket is going to be crazy but seeing this thing released is like a dream come true. Maybe some day we'll get Dorothy 2 or Beck the Great RX-3.

I'm actually surprised by the poseability in the upper body you mention it has some in the legs but do they bend at all or is it all swivel?

On another note, does anyone know why this Megadeus wasn't called "Big Trio?"

Wait... we already have a Dorothy 2; Dororthy 1 is the megadeus.
But, man! I would love to have that in a soft vinyl. Osrail, too, especially since we never got to see him un-destroyed.

And the legs are all swivels. No high-class joints here, my friend!

As for the reason why Big Fau is not Big Trio? Uh... 'cuz that sounds lame? Ha! But seriously, I have no idea why it's not Big Trio. However, in kanji for Big Fau -- ビッグファウ -- translates to Big Fouling. A fouling is "an encrusted deposit, especially on a submerged object, as the hull of a ship." It may have something to do with the nautical aspect of Fau and that "Fau" sounds like the first syllable of fouling.

Can you paste or link to the kanji spelling? I didn't realize that the Megadeus names were also spelled in kanji.

Well, Goodsmile has the Kanji as びっぐふぁう, which translates as Biggu Fau.
Wikipedia -- don't spear me -- has it as ビッグファウ, which Google Translate also suggests instead of びっぐふぁう.

Kanji is generally refereed to Japanese characters with a Chinese origin.

Kana is the overall word for Kanji, Hiragana and Katakana.

To clarify on Leo's point, Kana is broken into three different types.

Katakana is used for foreign words, so BIG and FAU, not being Japanese words, would be ビッグファウ.

I don't know enough about Japanese to know why they spelled it using Hirangana, but they must be interchangeable in some circumstances.

Ah! I see.
There's still so much for me to learn in this world...

Thanks for pointing that out!

I've seen it go both ways concerning Hiragana and Katakana, in fact certain Japanese words are sometimes only spelled as Katakana but generally speaking the statement that Josh said is correct.

I was in class most of today, so I couldn't follow the thread until now. I was thinking that perhaps you meant that Sunrise had used kanji characters to represent the phonetic spelling, i.e., what Konami does with Contra and Salamander (not that there's been any recent Salamander games). Sometimes, you'll see kanji used to simply represent a concept, while an invented, "correct" reading of it is included above or alongside it.
But yeah, the fouling idea is a nifty one, but it doesn't look like there's anything to it, as "fau-" in Japanese doesn't mean anything.

Yes, I've seen people use Kanji as phonetic representations as well, but it's odd to even for the Japanese and rarely used.

Recently on my Japanese Group Sounds thread on FB, somebody posted a video with Ed Sullivan's name spelled with Kanji used phonetically. My Japanese friends all got a laugh out of it as normally is would have been spelled with Katakana. Yes it happens but not regularly.

Generally those smaller Kana on top of or besides the Kanji is for young people who haven't learned all their Kanji yet and need reminders so they know how to pronounce the word in case they don't know the specific Kanji/Chinese Character.

I have a feeling I will be podcasting on "Japanese Language" soon!

It's probably a little more common than you might have experienced. It happens quite a bit in video games, anime and manga, especially when dealing with SF or fantasy settings.

Edit: Specifically the use of furigana to provide unique readings of kanji, that literally happens all the time in manga.

Edit+1: This stuff only really applies to creative writing. If anyone out there is trying to learn Japanese, don't do this.

I made a ShowaPop! Blog last night on how to convert your computer to type Japanese, it has some useful info.

ENEMY HAS ANOTHER BIG!?

i honestly never realized that the Bigs each represented air land and sea until you pointed out the submarine tower on Faus back!

relating back to the language discussion, does the O in Big O mean King in a Hiragana Katakana switch-up wordplay thing?

Yes, each Big is land, air, and sea. They are also representative of the three legendary beasts: Behemoth, Ziz, and Leviathan.

And as for the Hiragana/Katakana thing, I can't say. I always thought, however, that The Big O stood for the big O from Big O notation. I think this because the letter "O" is the solving factor of a "paradigm" equation.

everyone knows about leviathan and behemoth, but i had to look up Ziz.

I had no idea what the name for the robot came from, i thought it was just some japanese gibberish. its probably common info for math types (i went the artist route), but for a show so focused on big dumb action i never expected I'd be surfing Wikipedias math articles regarding mathematical notations!

now that i stop and think about it, Japan is kind of just like that though lol