This is the 1/6 scale Batmobile by Hot Toys. Yeah... you read that right... 1/6 scale... which means it measures over 3 feet long and perfectly compliments their 1/6 scale figures. 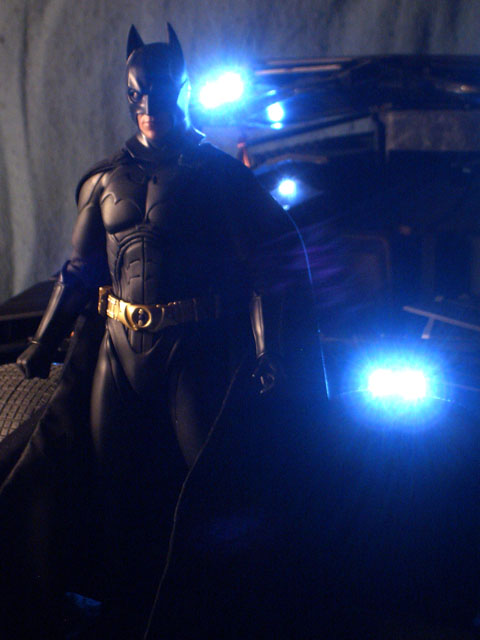 [NOTE: The 1/6 Batman pictured in this review is from Medicom's Real Action Hero line. I missed previous Hot Toys releases of Batman but do intend to review the upcoming MMS DX release coming from Hot Toys when it comes out in the 1st quarter of 2010.] Hot Toys has quietly taken the collectors marketplace by storm with their outstanding 1:6 scale pose-able figures and accessories. Usually licensed from well known international film, TV and Anime properties; Hot Toys makes some of the most intricately detailed collectibles in the 1:6 scale market today. 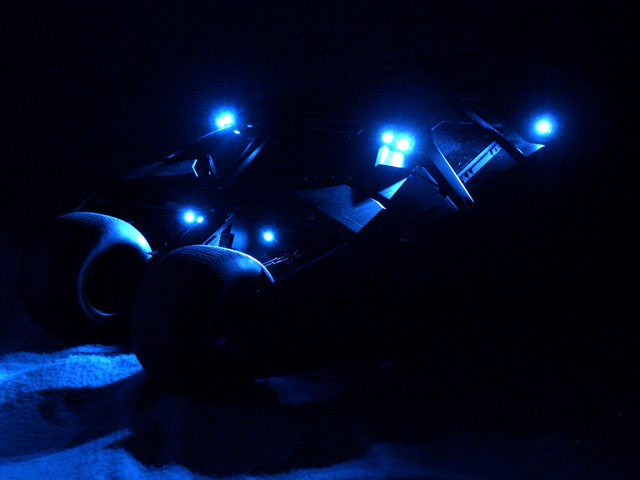 Many of the products end up being distributed here in the states by companies like Sideshow Collectibles or DC Direct. Which generally means your getting it months after it's original Asian release not to mention most of it never gets to us stateside here at all. (Don't even get me started about trying to “pre-order” ANYTHING using the Diamond Comics retail system...) However you can often get these types of pieces directly from the Asian market and our advertiser has recently started carrying more of the Hot Toys lines and sent over a surprise. So color me floor when this arrived on my doorstep... 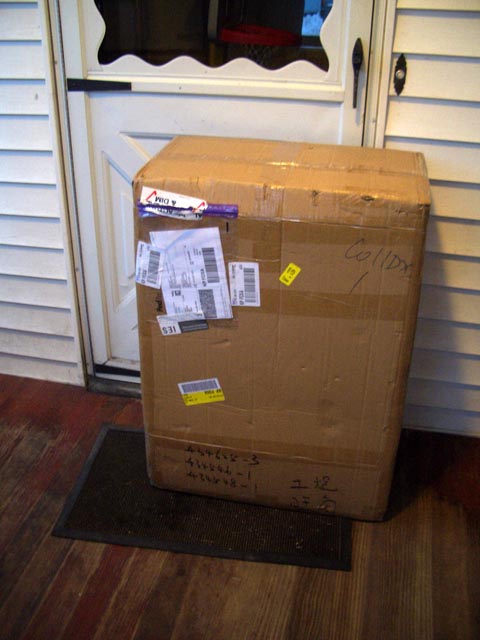 So as you can see, the box is HUGE! With a piece this big, the package it comes in, is designed to get the toy there in one piece not to encourage impulse buys by showing off the shiny. 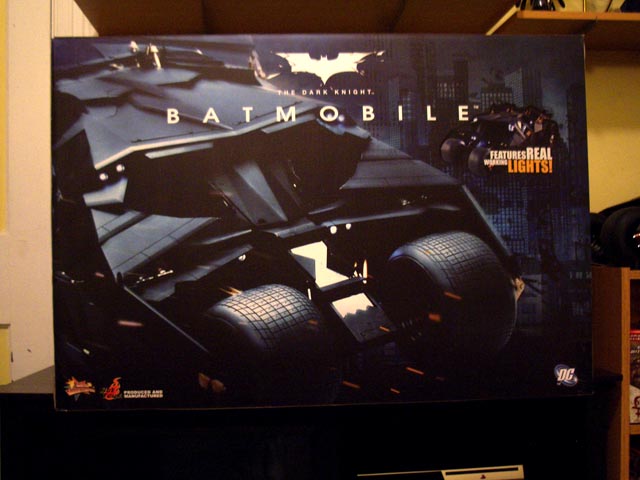 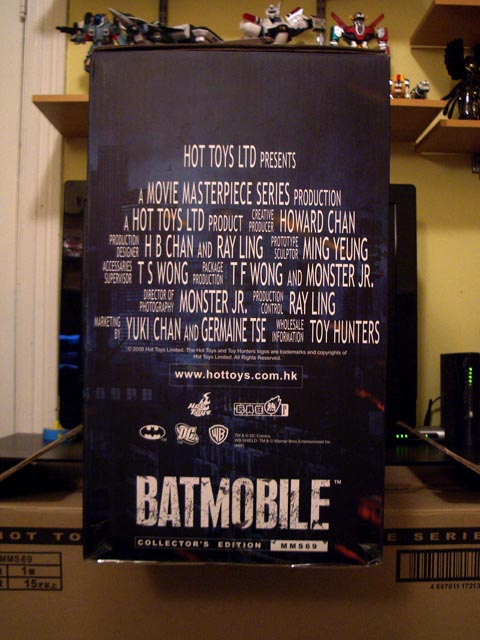 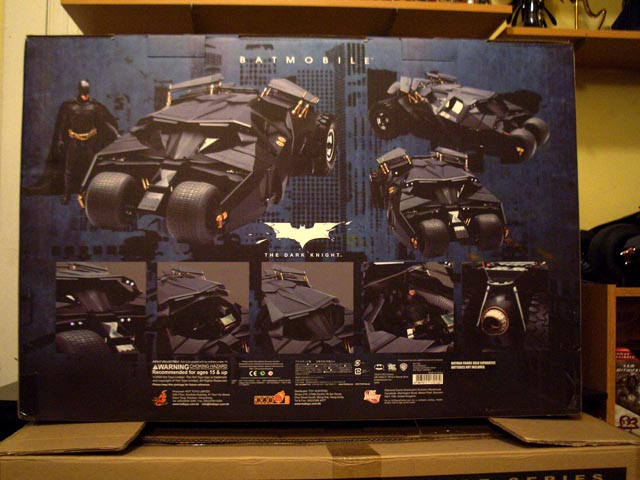 It measured 34 x 24 x 16 inches all around and weighs close to 32 pounds. Shipping it from Hong Kong cost a small fortune. Inside is a sturdy, dense Styrofoam coffin protecting the Dark Knights ride. 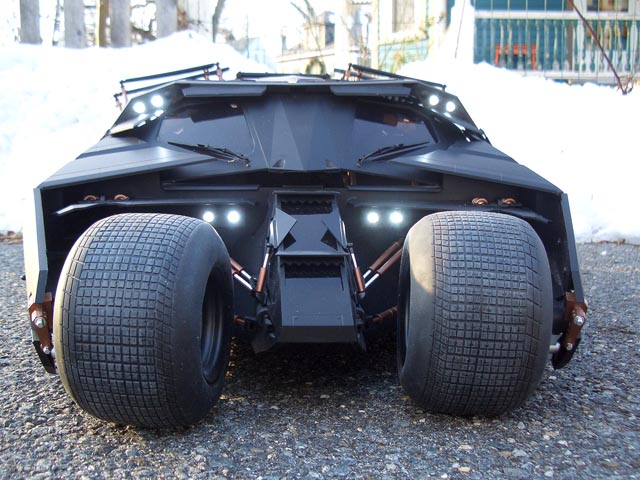 (Adhesive film is applied to all the windows to protect them from scratching. I suggest removing these with care as the wiper blades rest over the plastic and could easily be broken off while removing the plastic film.) 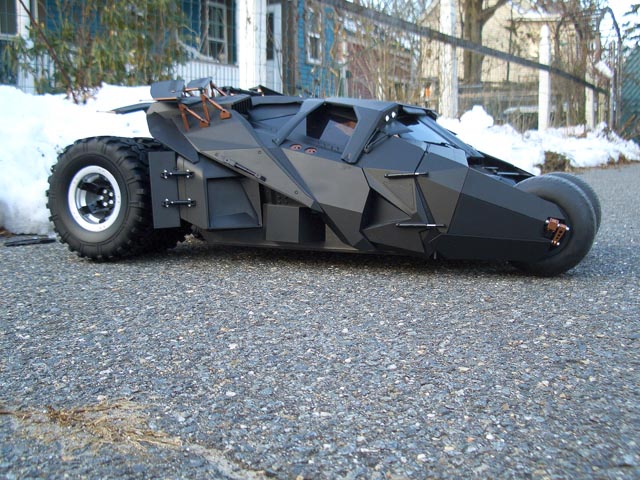 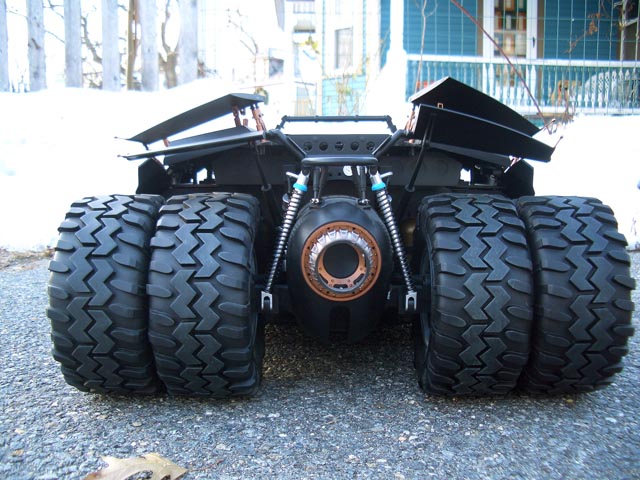 Some assembly is required. The air-breaks need to be attached to the vehicle and what I like is directions that include English! Assembly is easy and takes less than 2 minutes. 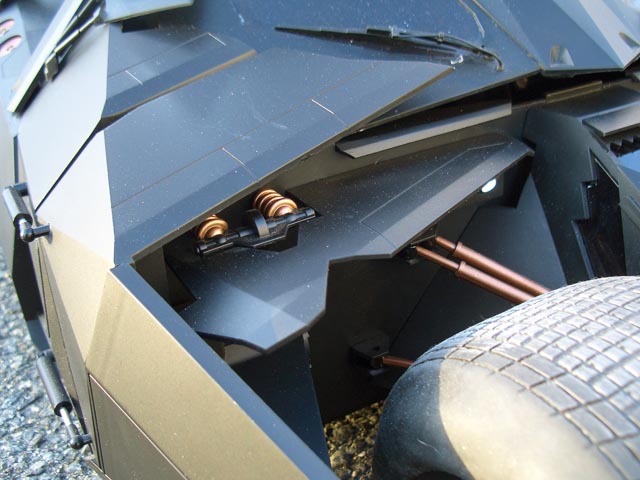 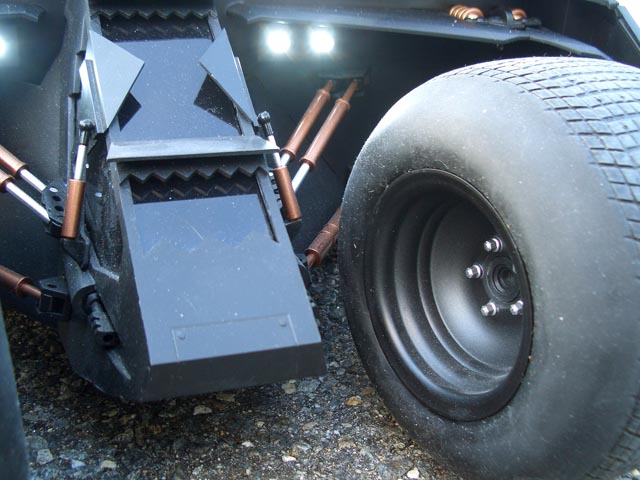 Safety pins are placed in all the wheel hubs preventing them from freely rolling and need to be removed. Once all that's done your good to go. 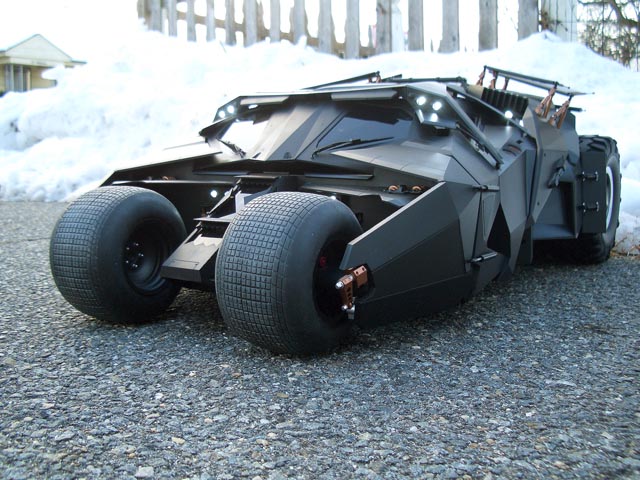 The Batmobile (also referred to as the Tumbler before Bruce Wayne re-purposes it for his uses) was designed from the ground up by the film's director, Christopher Nolan and Production Designer, Nathan Crowley before scripting had begun. It was the filmmakers hope to show Warner Brothers the tone and feel of the film with their design of the Caped Crusader's ride. The vehicle itself was built from the ground up to work in every way and even exceeded speeds normally used for filming car chassis (A normal car chase will be shot at around 30 or 40 miles an hour.. The Batmobile was hitting speeds in excess of 80 miles an hour.) 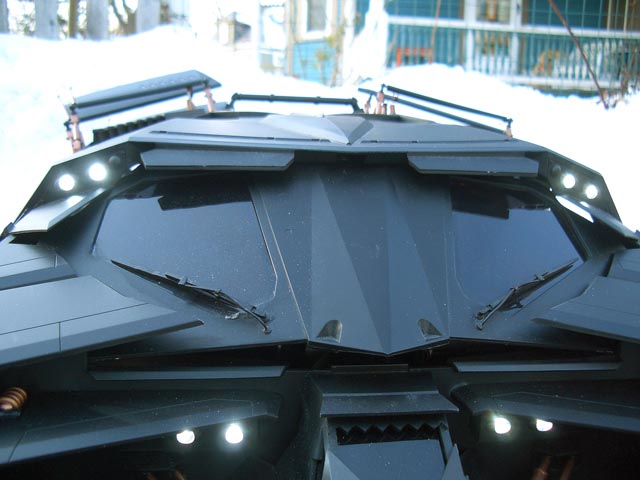 I've always been a Batman fan but never went deep dive on it. Well, Christopher Nolan really tapped into something because I just absolutely LOVE the tone and timbre of these new films. So I've been wanting a great representation of the Batmobile for a while and boy has Hot Toys nailed it. 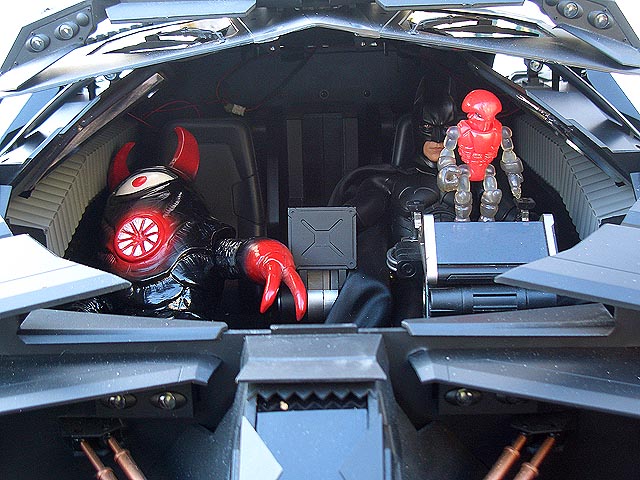 The cockpit opens and closes exactly like the film. You first lift the top part of the roof. Slide the front part back under the raised roof. Then you finish putting the lifted roof back. A magnet holds the front part of the cockpit in place. The mechanism is smooth and fluid yet holds together snugly when closed or open. Inside detail is painted on and is well done and has room for two 1:6 scale figures. 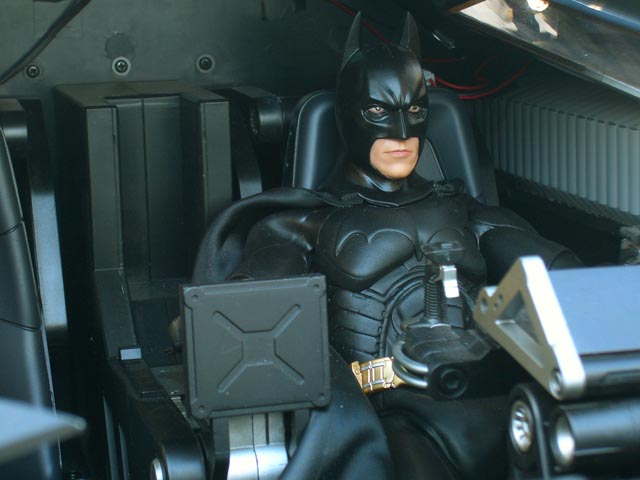 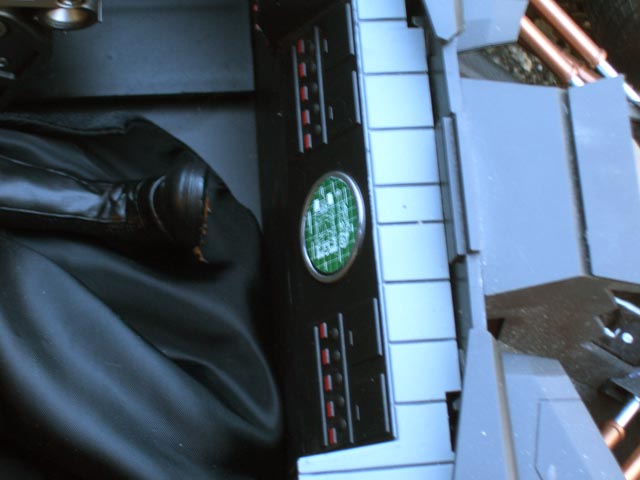 The throttle and LCD Screen move. Steering column raises and lowers and slides forward and back to accommodate your 1/6 scale figures. The seats sadly do not raise or lower like in the film. 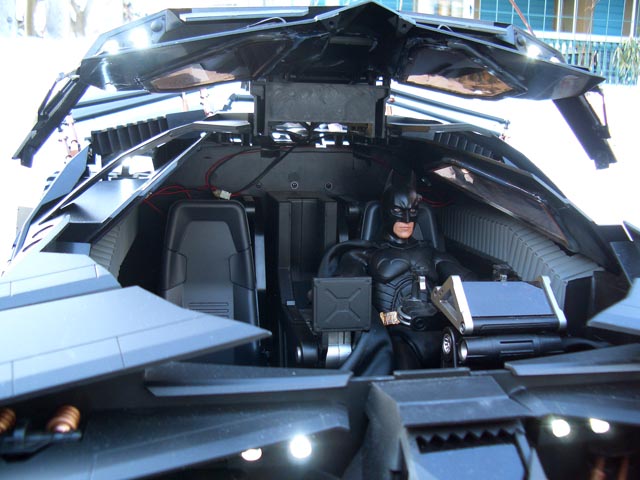 8 LED running lights are built into the Batmobile and can be turned on and off with an easy to access switch on the side of it. Luckily these are powered by three standard AAA batteries. Three AAA batteries which are not included. Seriously Hot Toys? $500 and I don't get batteries with it. That's a bit lame. 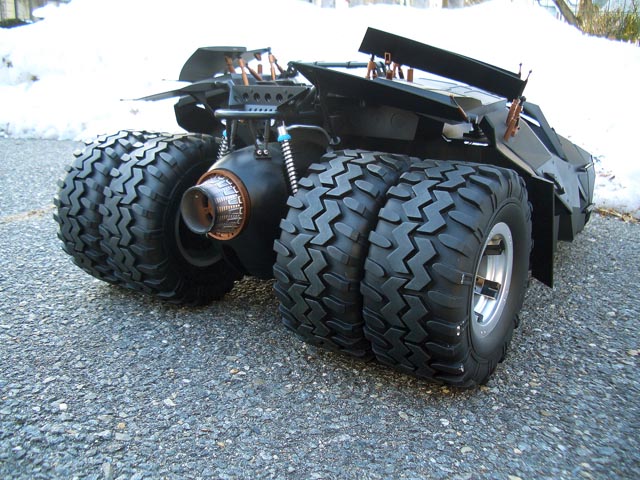 As you can see it is simply, stunning. The exterior detail gives the all-plastic piece the appearance of being made of metal.... strike that.... it gives the appearance of looking REAL. But looking stunning on the outside. The only metal on this piece are the shock absorbers on the rear wheels with the rest being all plastic with rubber tires. The front wheels do turn but are not connected to the steering column in any way. 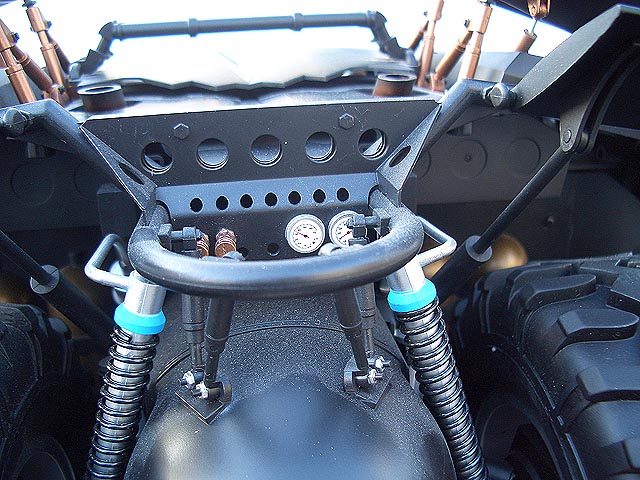 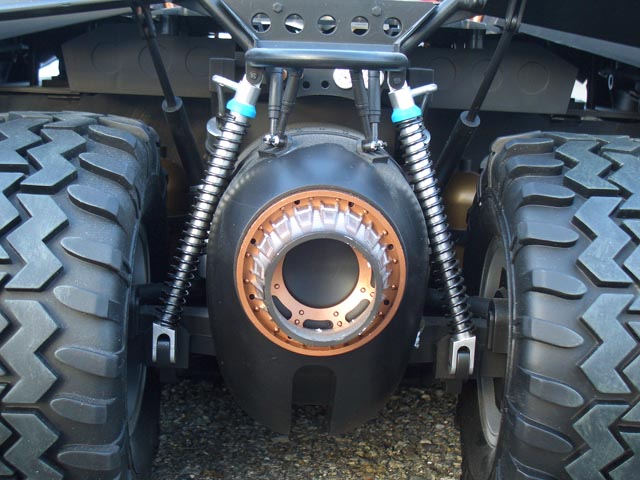 I've always been a Batman fan but never went deep dive on the mythology. Well, Christopher Nolan really tapped into something because I just absolutely LOVE the new films. So I've been wanting a great representation of the Batmobile for a while and boy has Hot Toys nailed it. 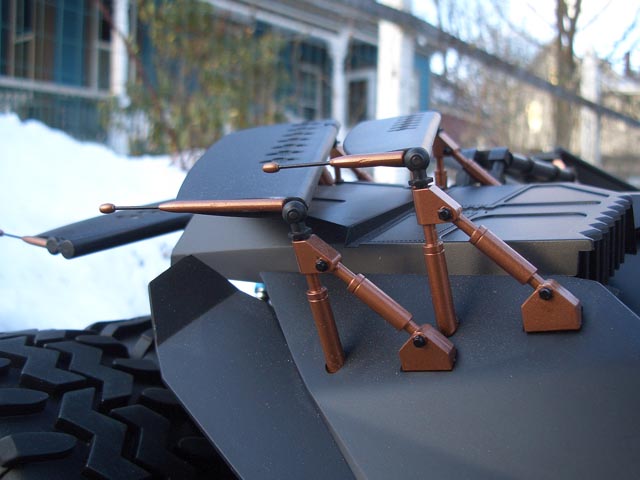 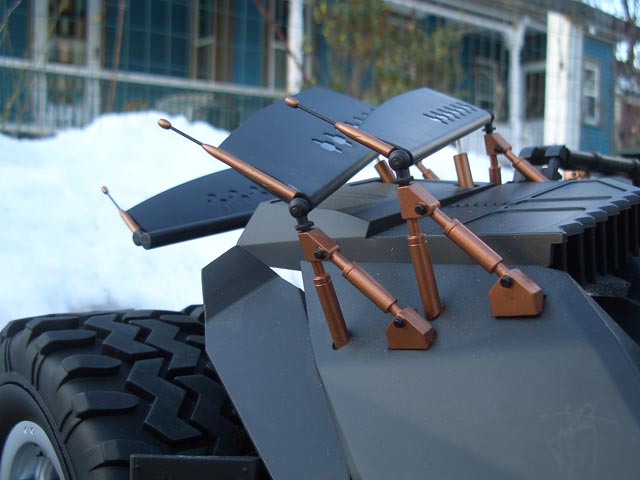 I love it but I'm a bit disappointed at the same time. For the price-point could they not have added working dashboard lights? Now I'm not talking anything crazy like blinking or moving displays. Just illuminated displays in there. Again, it's $500. Sound effects would have been nice as well... 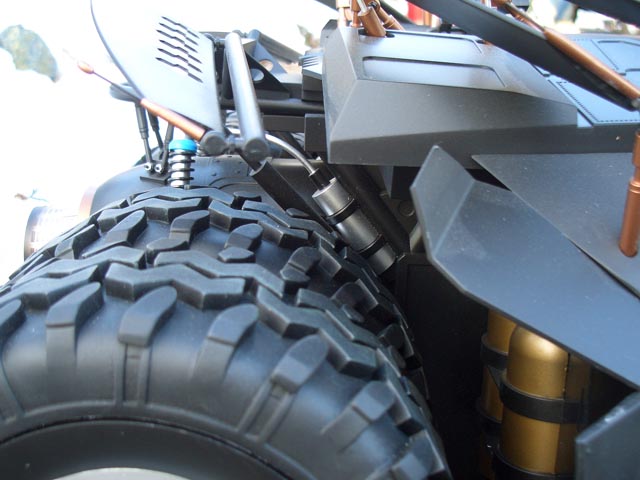 The reality is, with a price tag this high and the sheer size of the thing I doubt many interested collectors will pick one up. However, the casual collector is not the intended market. Hot Toys makes some damn fine collectibles and they have made the ultimate Batmobile for the ultimate Batman fan. If the Tumbler is your dream vehicle, you have the room (and the cash) you probably already have one. For the rest of you, enjoy living vicariously thru the photos and the video... 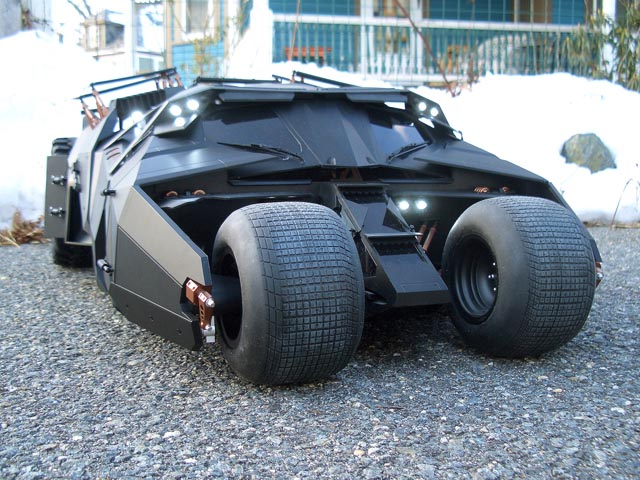 me too...actually the words I'd like to use are not allowed

Breathless. I want one!

you, sir, are the Caligula of CDX. This toy belongs in its own category. Thanks for sharing something I will never lay hands upon!

Just incredible. Seeing Sky Deviler sitting so comfortably in there really hits it home about how big this thing really is. Just amazing!

I manage a small (sorta) toy store in Chicago. I've had two of these tumblers come in and have sold each of them within days of their arrival! The pictures don't do it justice this thing is really amazing! A fan touching this is like a religious scholar touching the Shroud of Turin. It sends a shear spark of electricity through you! You should see how peoples faces light up when they run their hands across it! Beautiful!

Man, with the perspective and the snow, this thing looks lifesize in some of those pictures. But I agree, that gotta toss you a couple batteries for that money! lol