In an ironic twist of fate, the only collectibles I took away from the big Morphy's auction was material related to the auction itself, not any actual toys. But the event was still a pleasure to attend and it set me off on the hunt for toys I saw there. One such example of this were the Ninja Arashi vinyls that Sanjeev won. I got to handle them a bit and was pretty well blow away by how cool they were. I had to have some.

Fortunately, not long after a giant sized version of the coolest villain in the set, Majin Sai, appeared on Yahoo Japan. It wasn't in the best shape ever, with lots of paint loss, but it's rather grimy appearance really appealed to me as a monster fan. It reminded me very much, in style if not actual appearance, of the dessicated, blind zombies of Armando D'Ossorio's classic Spanish "Blind Dead" movies. 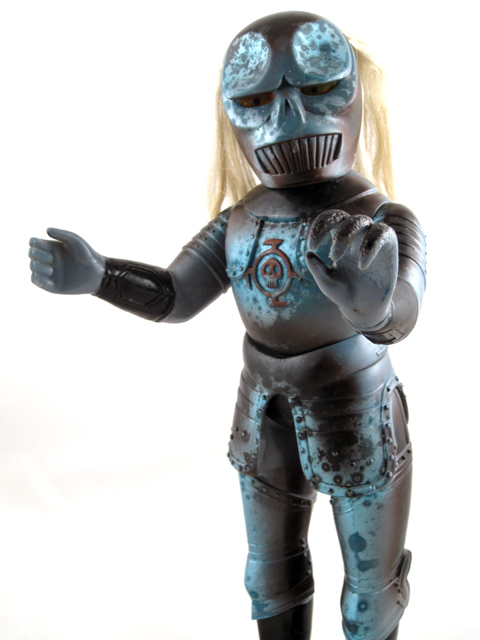 Futhermore, at a significant 13" tall, I thought it would look cool on a shelf with my Jumbo Machinder villains. The only problem was that this is one of the very first vintage vinyl toys I've purchased (excluding my Nitto Yokai) so I fear this has set me down yet another wonderful path of financial destruction. 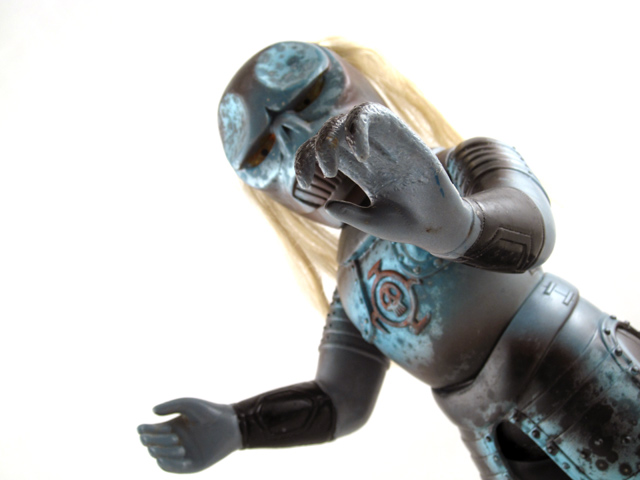 Majin Sai has the standard vinyl articulation (hips, shoulders and neck) and the armored skirt around the waist is a separately molded piece. Perhaps the neatest thing about it though is of course the hair. As someone new to vintage vinyl, this is still something new to me and the novelty of it is very eye catching, particularly on such an otherwise grotesque looking character. The white of it contrasts very well with the darker blues and black of the rest of his suit. 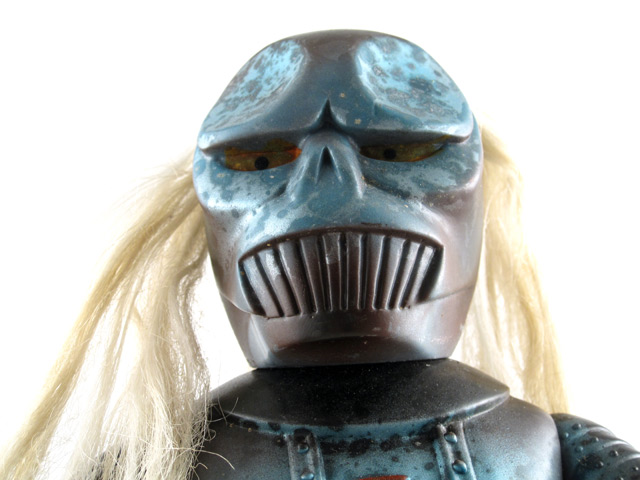 The red emblem on the chest also stands out, not only for it's red color, but also it's simplistic, ancient looking skull design. 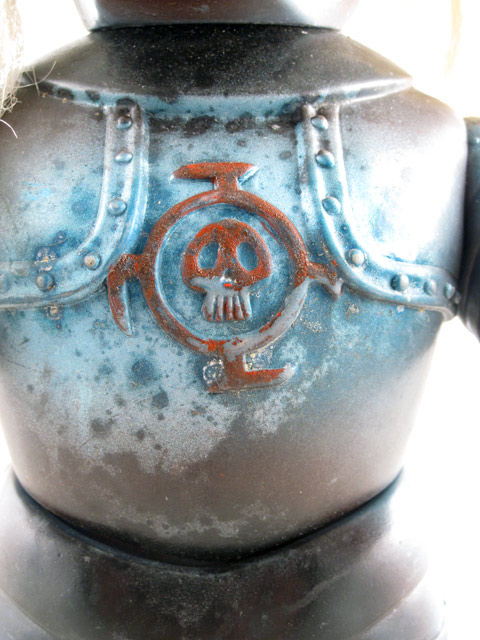 When I bought this, esteemed vintage vinyl collector Jim Maitland congratulated me on the buy, saying that it took him much longer to find his and then another one showed up after, in better shape for less money. Well, wouldn't you know, the exact same thing then happened to me! A much cleaner specimen of this toy appeared mere weeks after I bought mine and sold for less. But oh well. I sort of like the worn out, aged look of mine and have no regrets on getting him. I only regret that now I need more!

4 comments posted
This thing is awesome in

This thing is awesome in person. The whole set of them together.. how can you resist? Must fight the urge...

It would be really really hard to not buy that if I saw it up on ebay. It's just amazing looking. LOVE the hair.

This is one awesome looking toy. The face coupled with the hair reminds me of the old Shinto Kagura masks, and even Noh masks, which would use horse hair. I am going to have to look into this show and toy line. Very cool. Thanks Dave!

Creepy, creepy! This goes right along with either your Japanese, or Monster collections Dave. Nice "patina" (can I use that word?) I love the finish on this guy. I missed the eyes the first time scanning the pics.

I was under the mistaken impression that Dave had a ton of vintage vinyl stuff. Well, stuff like this certainly shows eclectic taste. I love it!