Transformers: Generations continues its trend of taking established gimmicks and applying them on a line-wide scale. Last time, it was combiners, and now, an army of little men (or robot men) in armor have been unleashed on the Autobot / Decepticon war to help everyone get a head. Titans Return has brought back not only traditional Headmaster characters like Chromedome and Skullcruncher, but has also taken fan-favorites like Scourge and Blurr and re-imagines them as toys with transformable noggins. Racing in from the outskirts of the third wave of Titans Return comes the brash young Autobot cavalier, Hot Rod! 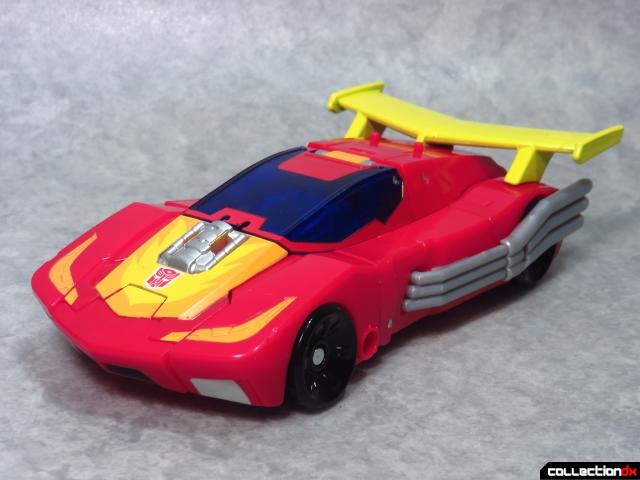 The recently renamed "Autobot Hot Rod" (for trademark reasons), starts off familiarly enough as a sleek, tuned-up sports car from the far off year of 2005. 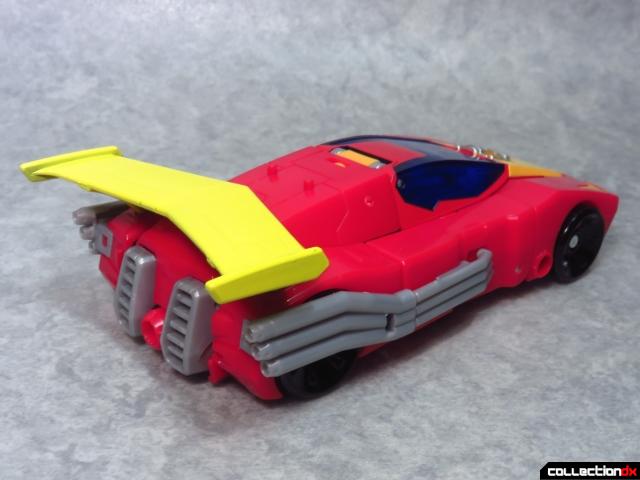 He cuts a mean silhouette with the traditional side-mounted exhaust pipes and yellow spoiler grabbing your attention at every viewing angle. 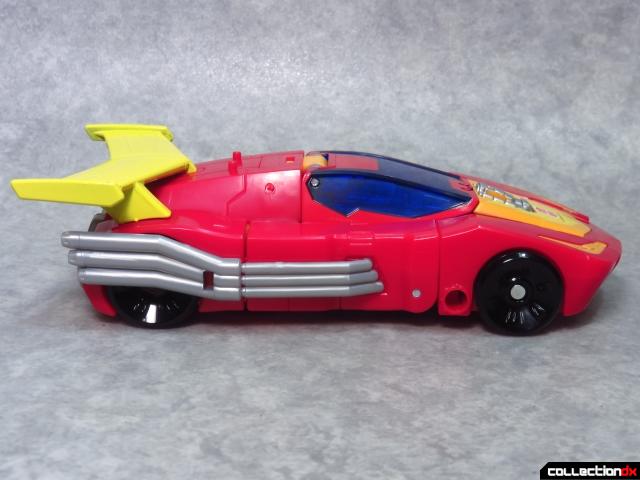 Hot Rod is about five inches long in vehicle mode. 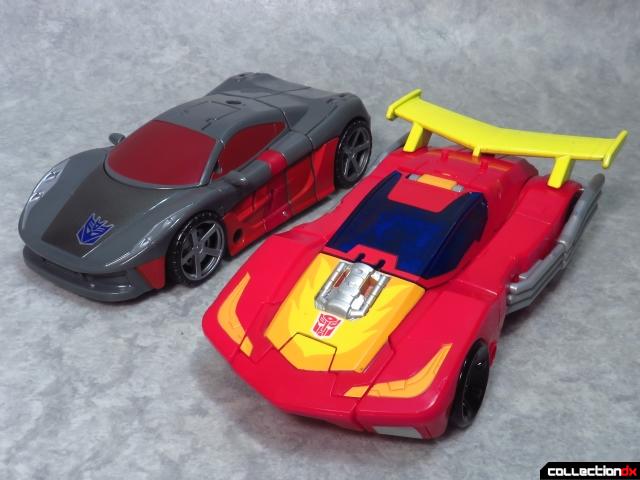 As such, he fits in with most other Deluxe-class Transformers cars. Shown here is Hot Rod next to Combiner Wars Breakneck. Weirdly, the addition of a clear windshield piece gives the Titans Return figure a lot more presence in a way that tricks my brain into seeing it as a larger toy. 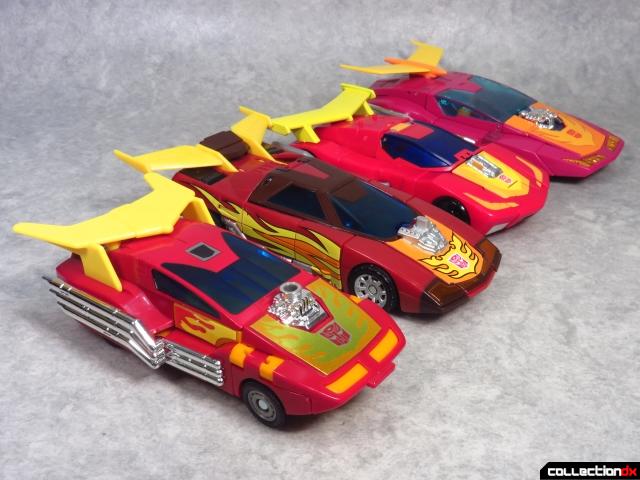 All in all, this new Hot Rod is a fine representation of the 2005 super car and goes well with his fellow cavaliers. Shown here is the TR turbo-revving young punk along with the Generation One, Classics (in United colors), and Masterpiece toys. 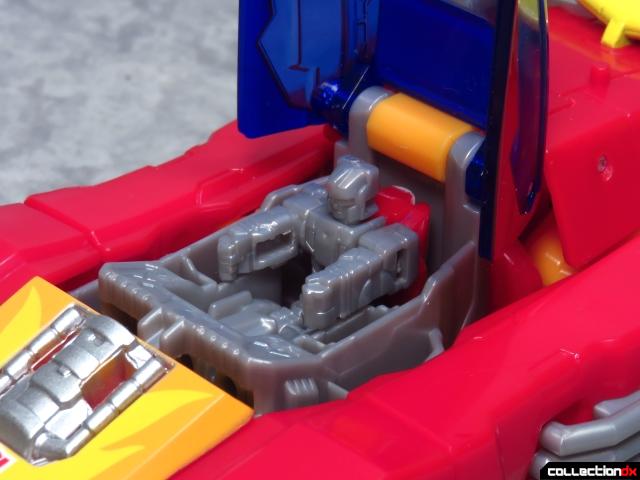 Flipping up the clear blue windshield reveals Titan Master, Firedrive, at the controls. 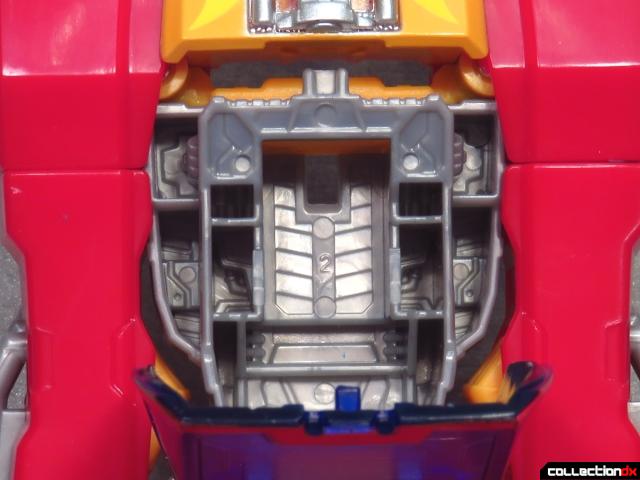 Once removed, you can see some cool tech detailing inside Hot Rod's cabin. Sadly, there is no tiny steering wheel for Firedrive to grab. There is a little slot for the tab on the underside of any Titan Master's legs so the little drivers will stay securely in the seat. 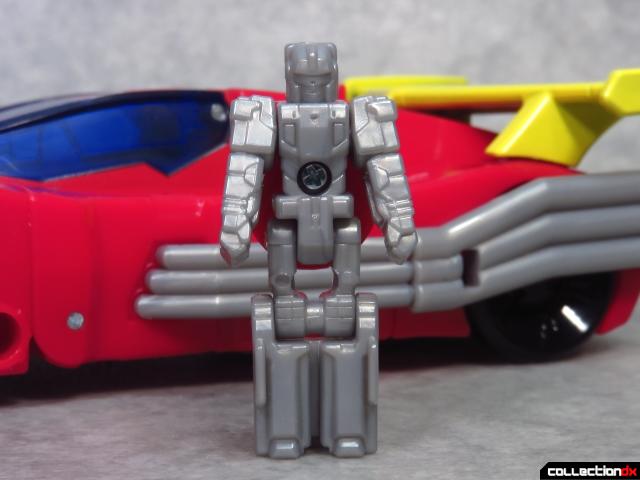 Firedrive bears a strong resemblance to G1 Hot Rod's original Targermaster partner. Sadly, he cannot be named "Firebolt" because Mattel has all the Harry Potter related trademarks, including the wizard boy's special broom. One neat thing about Titan Masters like Firedrive, is they all have a decent amount of articulation despite being about an inch and a quarter tall. In addition to curling up for head mode, they can all sit, move their arms up and down, and turn their tiny heads from side to side. 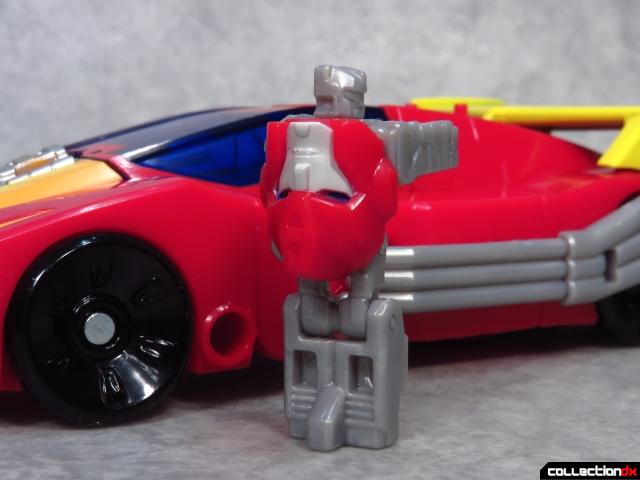 Now as you may have noticed, Firedrive is a bit plain in terms of colors. Hasbro's notoriously tight paint budget is most likely the reason Hot Rod's Titan Master is almost entirely bare silver plastic, save for the red face plate. The Autobot visage Firedrive wears as a backpack receives all the attention with white for the face a dark blue for the eyes. 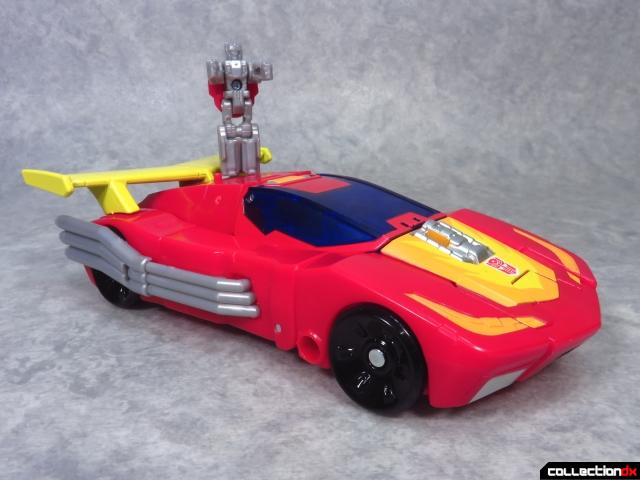 An interesting aspect to all the Titans Return figures is how each toy is its own "play set" for use with multiple Titan Masters. Unfortunately, certain vehicle types limit what can be done for added interactivity. As a simple automobile, all Hot Rod can muster is a pair of trunk pegs for Firedrive and his ilk to plug onto. Honestly, this doesn't look particularly cool, rather, it looks like the Autobot's little partner just doesn't know how to properly ride in car. 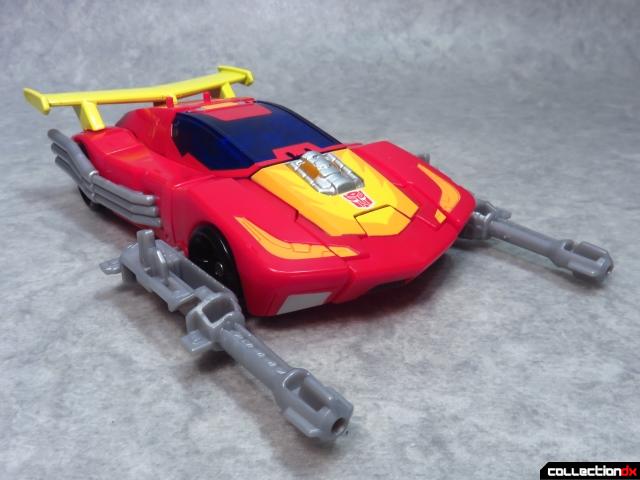 Hot Rod's weaponry consists of a pair of blasters meant to invoke the G1 toy's twin Photon Lasers. These can be plugged into 5 mm ports on either side of the car. 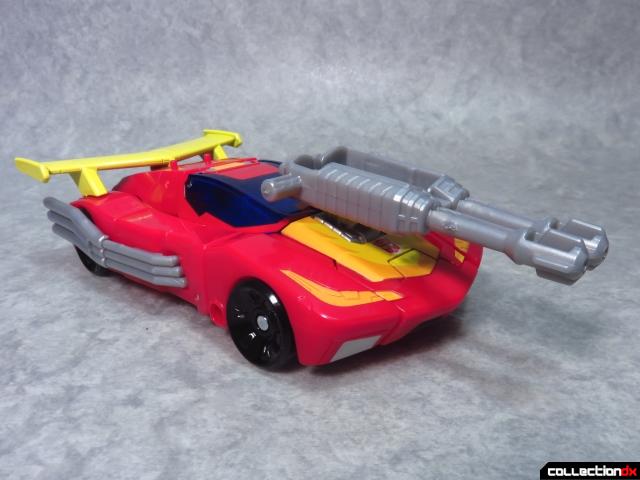 They can also be combined into a double-barreled gun that resembles G1 Firebolt's gun mode. In this form the blaster uses a pair of tabs to slot directly into Hot Rod's exposed engine block. 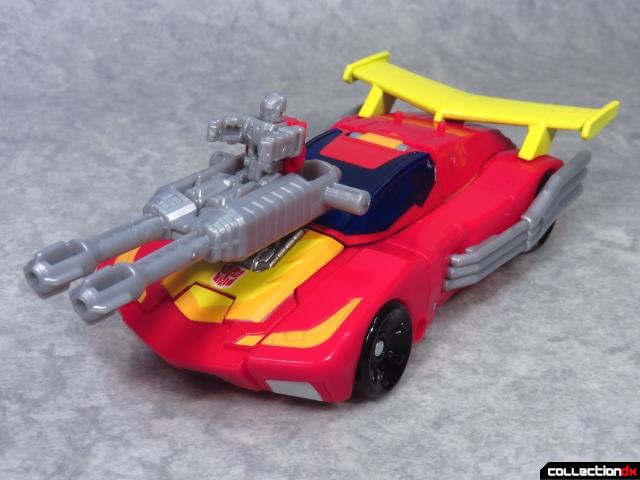 Firedrive (or any other Titan Master) can sit in the combined weapon to be the world's most precariously positioned Death Race gunner. 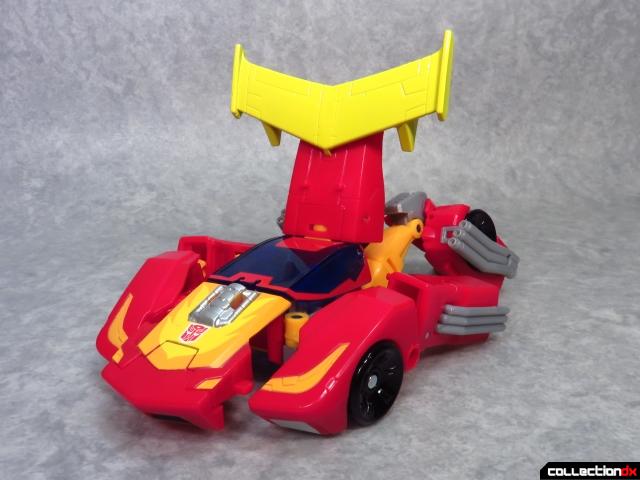 Longtime Rodimus fanatics will find transforming the Titans Return figure a pleasingly familiar affair. One new twist on the formula is how a simple twist of the waist converts the silver vents on the rear of the car into the Autobot's knee pads. 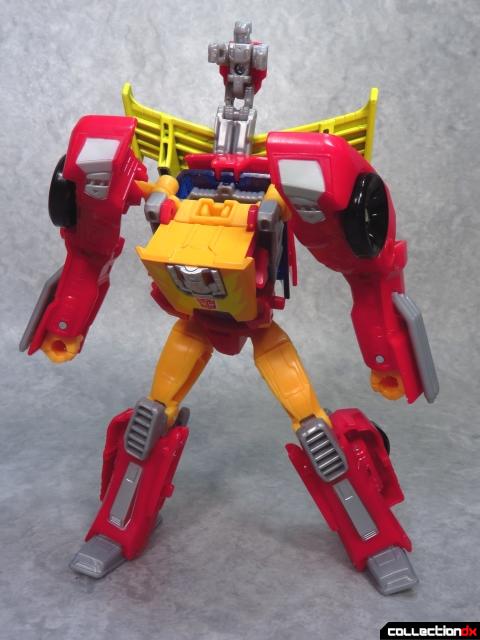 And one thing I really enjoy about the conversion process is how Firedrive can easily "leap" from within the vehicle cabin and form the robot's head in one smooth motion. It's almost as if the toy wasn't a Headmaster at all. 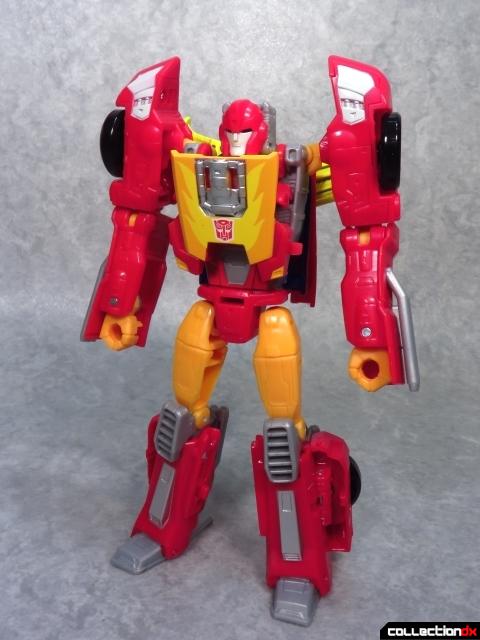 Hot Rod stands about six inches tall in robot mode. Design-wise, the TR figure is a pretty straight update of the character's original design. Like with most Hasbro versions, this Hot Rod is colored like the vintage G1 toy with a red body and orange hands. 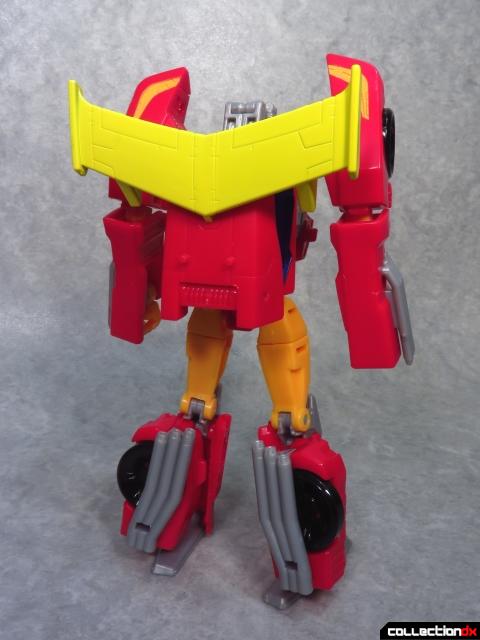 From front to back, Titans Return Hot Rod is an incredibly clean robot figure. It's been a while since the last Deluxe-class G1-style toy of ol' Roddy, so it's good to see the first new mass-retail version of the character really nail it in terms of looks and engineering. There's even touches of previous figures, such as how the backs of TR Hot Rod's lower legs has parts of his exhaust pipes like how Masterpiece MP-09 Rodimus does. 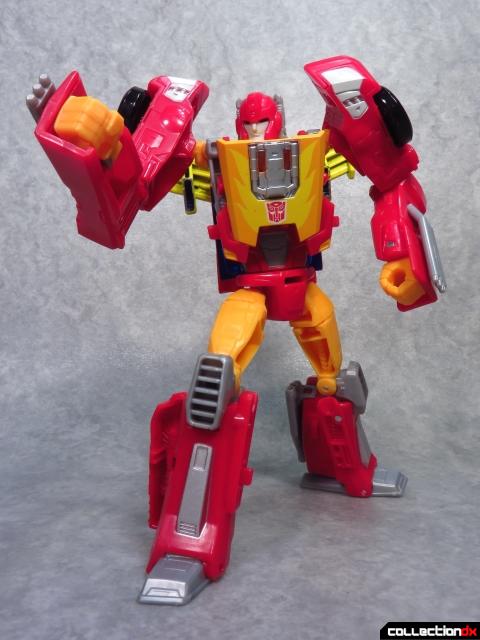 In terms of articulation, I am happy to report that the Titans Return Hot Rod is a solid Transformer figure. Pretty much every joint you expect a modern Deluxe to have is all present on the Autobot Cavalier. Even the tiny Titan Master's own neck joint allows full robot a good amount of head movement. 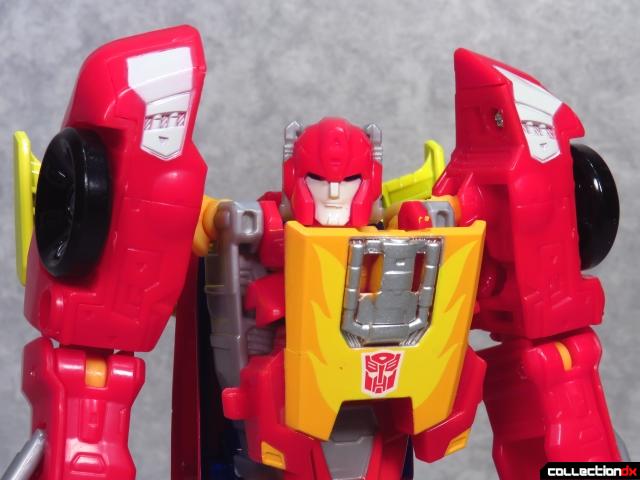 To be honest though, I kinda dislike the fact the arrival of a new Deluxe Hot Rod coincided with Hasbro's current practice of doing line-wide gimmicks. I mean, the Titan Masters are a terrific update on the classic Headmaster idea, with Firedrive solidly plugging in and out of Hot Rod's neck port with no issues. Even making traditionally non-Headmaster characters into one doesn't bother me. However... 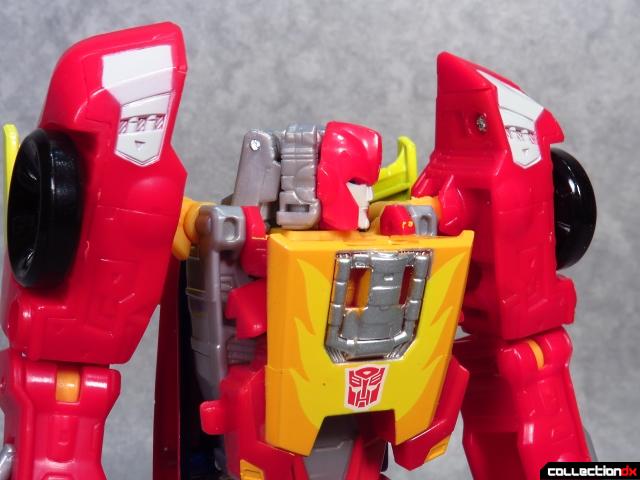 In practice, Firedrive's head mode demonstrates the rather awkward way Hasbro has adapted some classic characters into being Headmasters. And by that I mean, they didn't really adapt them at all, just stuck the bot's face onto the back of a Titan Master and called it a day. And while TR Hot Rod does have an very handsome visage, there's no getting around you have half a rounded helmet stuck on a big gray block. Sure, the G1 toy was also kind of like this with the back of Hot Rod's head being his vehicle mode engine, but here it just looks weird. I would have much preferred seeing Roddy's cranial design re-imagined as a Headmaster, instead of what we got. I will say, Transformers who always had squared off heads look pretty good as TR figures (such as Blurr or Optimus), but Hot Rod's familiar Mega Man style helmet just screwed to a box isn't doing it for me. 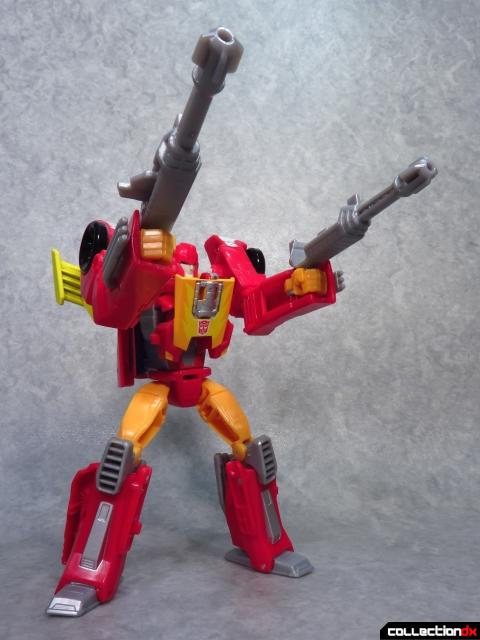 Aesthetic gripes aside, TR Hot Rod is still a terrific Transformer who makes for a great desktop buddy. He is suitably heroic looking and nails the attitude of a brash warrior, especially when brandishing his twin blasters. 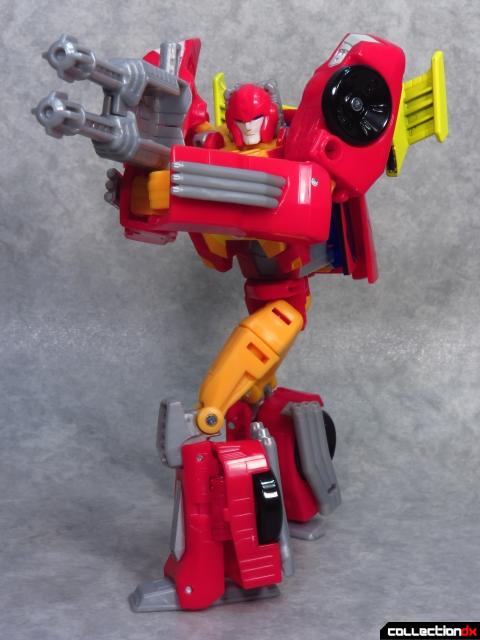 Although, from some angles the big chunk cut out of the guns for the Titan Master can make his accessories look a little "incomplete." 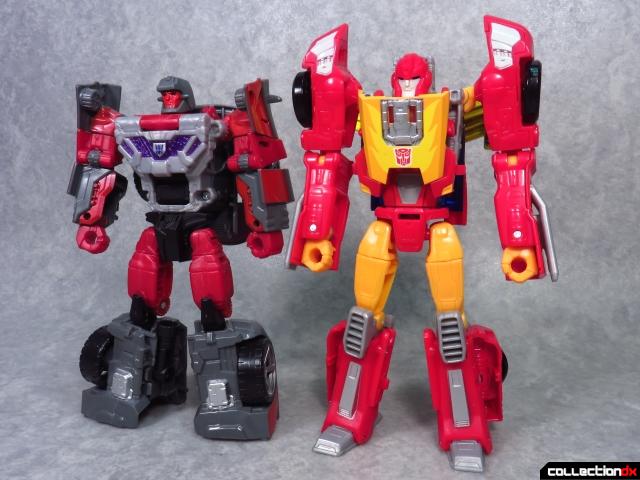 Like in vehicle mode, Hot Rod looks just a little bit larger next to other Deluxe-class car guys like Breakneck. Even if the two are nearly identical in terms of raw plastic, Hot Rod has a hollow spot in his torso for a Titan Master, which allows his mass to be spread out a touch more. 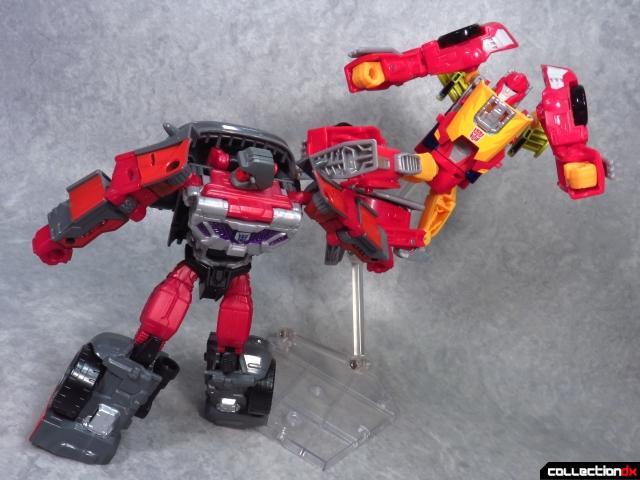 And like a lot of recent Transformers figure, Hot Rod has a hole for attaching any number of common action figure display stands. Shown here is a Tamashii Stage letting the young Autobot deliver a jump kick to the jerk who once robbed him of the Matrix of Leadership. 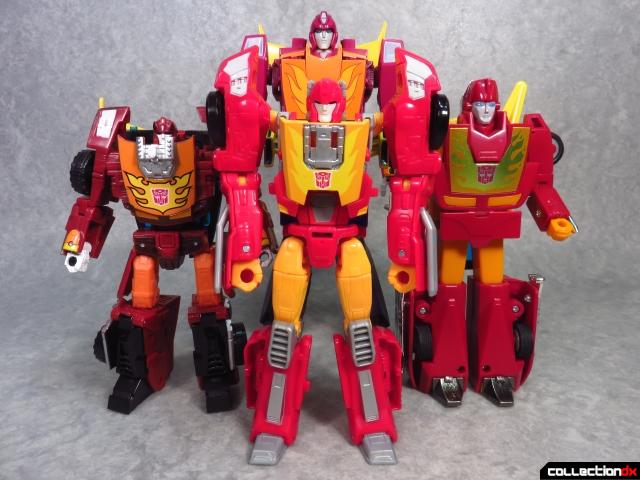 Here is the the Titans Return figure its aforementioned G1, Classics, and Masterpiece brethren. He fits well in the Deluxe size class and definitely has the potential for more repaints, such as a G1 cartoon color scheme or even "Black Rodimus." 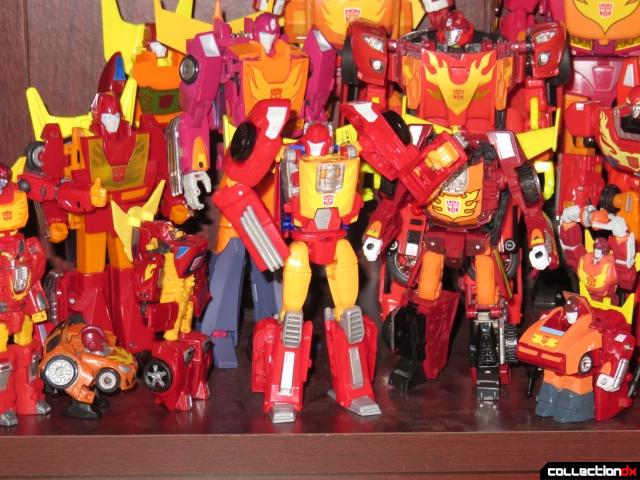 Any day I get to expand the Rodimus Shrine is a good day indeed.

Overall, the Titans Return Hot Rod is one of the highlights of the current line. Aside from my own gripes about the head sculpt, there is no reason not to get one. In fact, I would have done this review sooner but Hasbro's typical spotty distribution made finding one at a local store rather difficult.

Until next time, fellow Rodimus fans, remember to let nothing stand in your way.

Not even the lack of a head.

2 comments posted
Are the hips on your hot rod

Are the hips on your hot rod loose? Mine kind've are

Just a tad. Nothing a spot of polish won't fix.