I’m going to use this opportunity to both wax nostalgic about and mock the classic television action series The A-Team in a faux literary style. I dearly loved watching this show as a child, and now savor its presence on my Netflix "instant watch" queue. If you just want to read the review of this uninspired and uninspiring figure, I encourage you to skip the wall of text awaiting you below. People criticize the formulaic nature of prime-time television. Brother, you have no concept of formulaic until you’ve watched an eighties Mr. T vehicle. Every single episode of The A-Team was identical. Each unfolded thusly:

1.A tragically put-upon young lady is pressured by a local group of thugs to relinquish her land, charitable organization, small business enterprise, or in certain instances, her very maidenhead.

2.Said lady is rebuffed by the local law enforcement agencies, as these have been themselves corrupted by the very thugs who threaten her life.

3.Who could possibly assist such a person in her hour of need? Why not a renegade group of industrious Vietnam vets who wisely evade capture by keeping a low profile and traveling, when necessary, in anonymous vehicles within various American cities? Or, alternatively, a similar gang of mercenaries who drive around Los Angeles in a flashy custom van? Either way, she puts in the call through her sources in the underground.

4.Luckily she is able to meet with a handsome stranger in a little restaurant to discuss the prospect of hiring the mercenaries. Unhappily, the handsome man informs her that the team has declined her invitation to risk life and limb, presumably pro bono, to alleviate her distress.

5.That elderly ethnic waiter has different ideas though! In a flash he is replaced by a grandfatherly gentleman who really looks like that guy from Breakfast at Tiffany’s. “Congratulations,” he growls. “You have just hired the A-Team!”

7.In short order, the fellas are on the scene. After some…complications with air travel, a groggy B.A. Baracus awakens en route to the inner city, or sometimes rural, milieu for tonight’s tale.

8.There is an initial gesture of intimidation by the team, wherein they proceed to shoot the ever living hell out of the gang’s local haunt, careful not to spill a single drop of blood. All of those bottles of liquor behind the bar are fair game, though.

9.Huzzah, end of episode. Except…

10.Those miscreants are not so easily defeated. They will instead regroup, turn the tables on our heroes, and eventually imprison them, usually after a car chase. In this chase, a thug’s jeep overturns after being driven off the road. Fret not, dear reader, for the driver is unscathed!

11.Our heroes appear to be stuck. While the gang has allowed them to live -for now- they are confined within a shed, garage, basement, or sometimes a cave. But lo! The criminals have foolishly imprisoned the A-Team near a seemingly benign collection of useless junk. There are yards of electrical tape, a few rusty cans of gasoline, a poorly maintained combustion engine, plate steel, and a lonely old acetylene torch and welding mask.

12.But our boys have not survived the hell of Vietnam and its aftermath without a certain ballsy resourcefulness in the face of impossible odds. Cue the montage!

13.The hooting lowlifes soon return to take their bloody revenge. They need only open the door to the strangely quiet barn, warehouse, or walk-in freezer…

14.BOOM GOES THE DYNAMITE. Or Gatling gun. Or grenade launcher. Or potato gun. Or catapult. You get the idea.

15.You could say that the team’s “plan” comes “together” in a flurry of improvised mechanical destruction. In the heat of battle, B.A. Baracus actually picks a man up by his belt and collar and throws him over a vehicle very slowly.

18.(This sequence is by no mean exhaustive. I have omitted, for the sake of brevity, both Face’s customary extraction of “Howlin’ Mad” Murdoch from his VA mental hospital, and the series’ larger story arc, wherein Hannibal’s crew is relentlessly pursued by the malevolent Colonel Deckard.) You could say I’ve internalized the beautiful structure of an A-Team episode. So I love the show and have looked forward to the big-screen adaptation.

The review of the toy in question

And big-screen adaptations beget – toys: usually soulless mass-market toys. Is this here Faceman any different? I’m sure there will be A-Team figures released at many price points. This figure is squarely in the Bare Bones category. The package is nice enough, but it’s a very basic blister card. 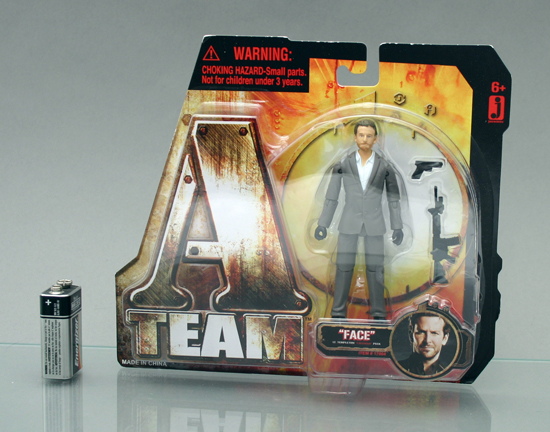 There aren’t even any pictures of the other toys on the back, just the boilerplate A-Team narrative. 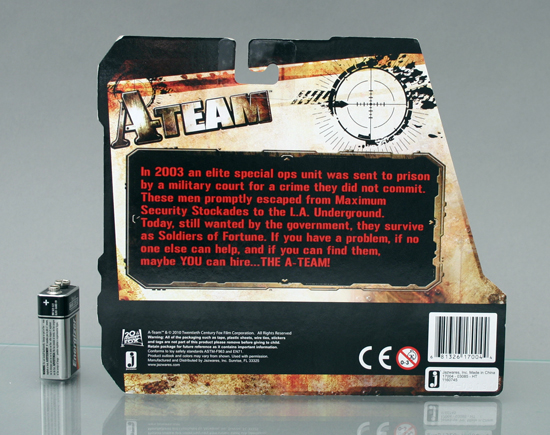 Face is packaged with a handgun and a machine gun. While I like that there is no forced gimmickry to the set, the accessories are stingy. And made of soft rubber. 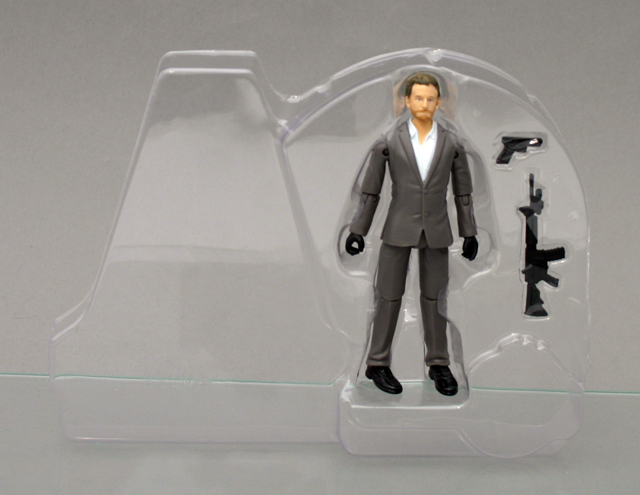 I don’t expect much of a Face action figure. Face isn’t a superhero, he’s just a smooth guy in a suit who can kick ass when called upon to do so. In that sense, the figure is exactly what I expected: a guy in a suit. 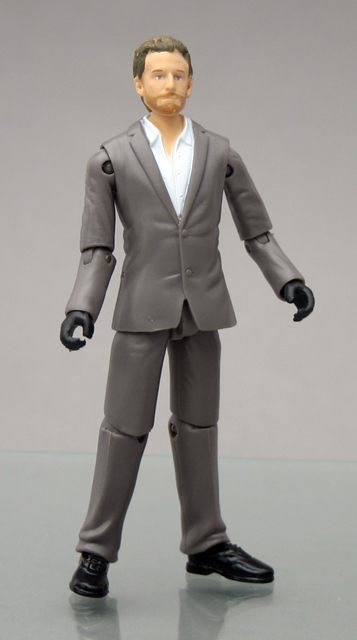 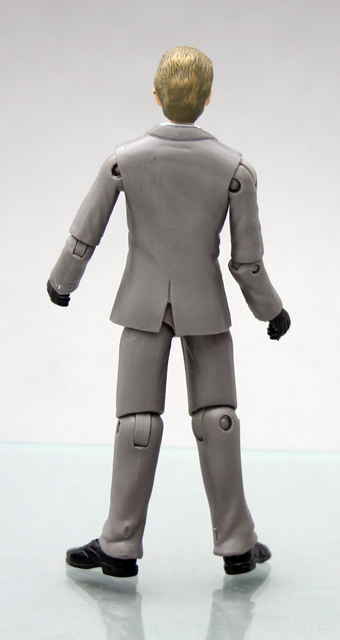 The sculpt and paint apps are par, but only par. I do like the likeness to Bradley Cooper. The five o’clock shadow is a nice touch. 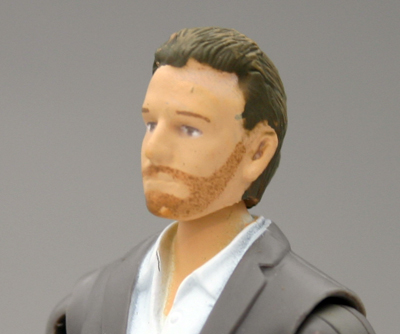 Articulation is woeful. The rubber jacket limits the legs, and moving anything even slightly causes him to topple over. 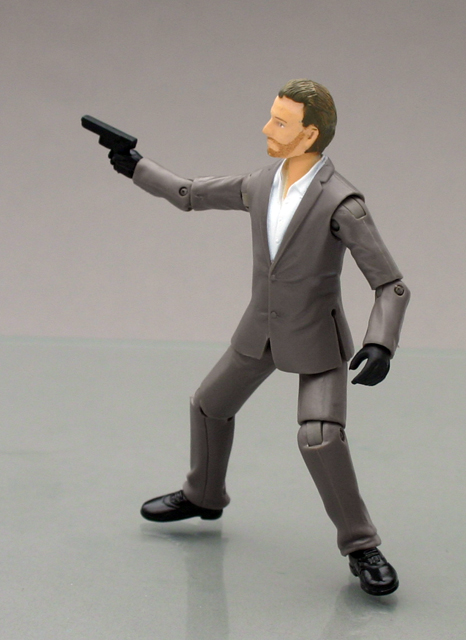 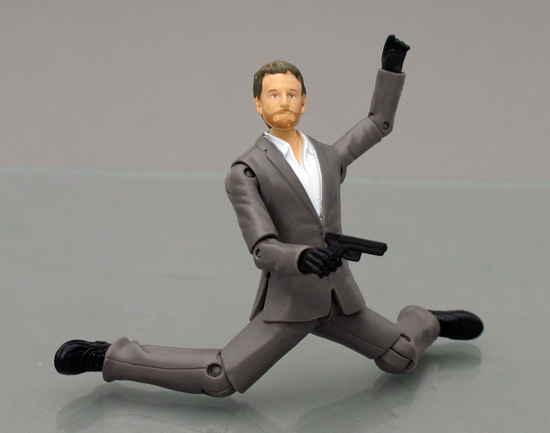 Ultimately, this toy is not fun at all. Just an anonymous figure destined for the bargain bin. I’m not familiar with Jazwares, but this is not an auspicious introduction. So not overwhelming. But it’s a Templeton Peck action figure, so I can’t help but like him a little. And if I ever want to recreate scenes from The Hangover or All About Steve, I’m set. 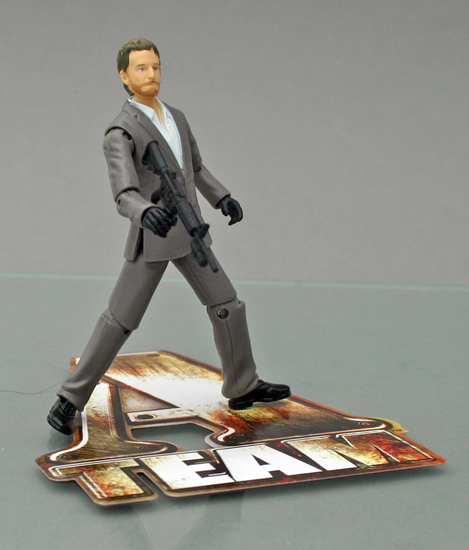 To be fair, the A-Team toys were never going to be anything special. It’s just not a story that is big enough or fantastical enough to really need toys (except for the iconic van, of course). I can make believe I’m a guy in a suit, or a guy in a bomber jacket, pretty easily, no matter how cool or fun the character may be (though the pantomime of a giant black man with a Mohawk and excessive jewelry is more of a stretch).

4 comments posted
Well it was certainly a long

Well it was certainly a long review but funny?...dont give up your day job

At least I was right about the "long" part.

Hey, he did work in "Boom Goes the Dynamite" nicely. Ya gotta concede that!