The Assemble Borg series was designed by famed Trigun manga author Yasuhiro Nightow and they are a new style of toy from Kaiyodo. When I jumped into this review, I had no experience with Assemble Borgs. Something about the design tickled my 80's fancy even though these are modern toys. I couldn't quite put my finger on it, I don't know if it reminded me of Microman figures, Dunbine or any of the other toys I would come to love as a kid. When I learned that this line was designed for creativity and expansion, I was hooked. Upon receiving the toy, it was a another matter entirely. While the figure allows some creativity, I could not take full advantage of what is offered without having the other figures in the line. Some great stuff can be done. Mixing and matching galore, designing your own crazy scientist type figures, creating vehicle or even better, big robots.

Ghost Gunner comes in a neat Revoltech box that displays the contents. This box appears to be the same box used for the other two figures because the set number is a sticker. 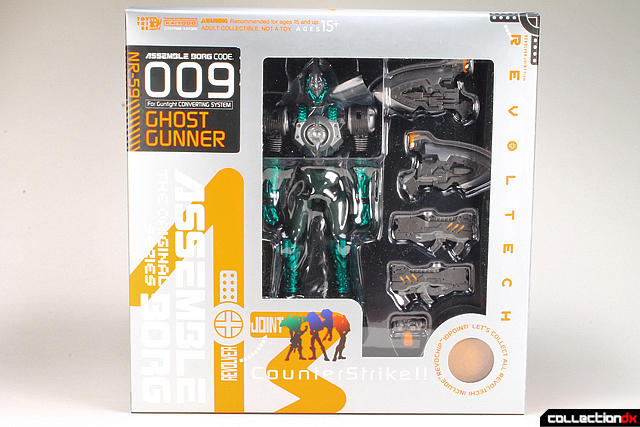 The figure comes in your standard plastic clamshell tray. 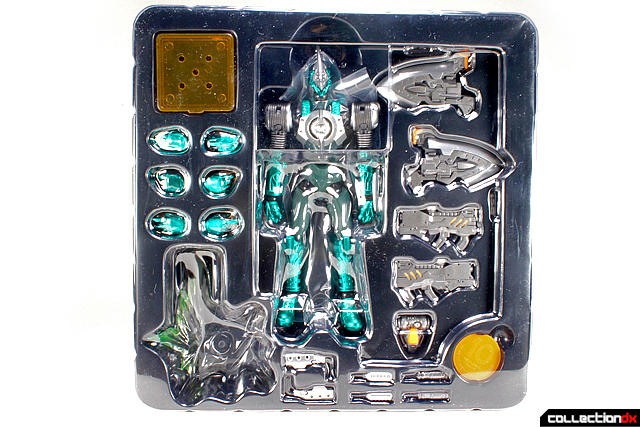 Once you take the figure out of the box you will need to assemble his shoulder mounted weapons and attach them to his shoulders. When new, the pieces will be near impossible to put together, especially when your humble narrator's thumb is fractured. Upon doing this, you will notice you have destroyed most of his chances of standing on his own. Say hello to the photos that ate away pieces of my life. 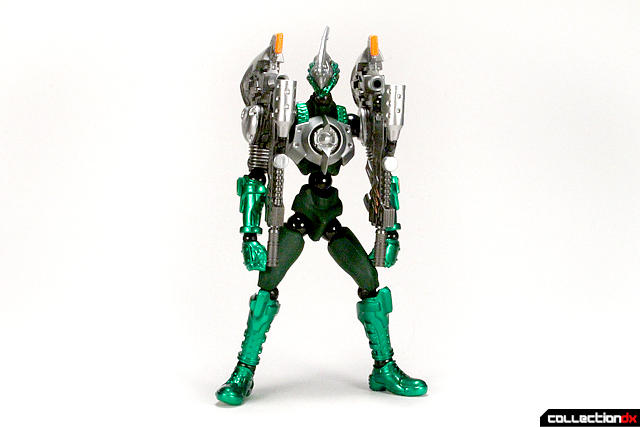 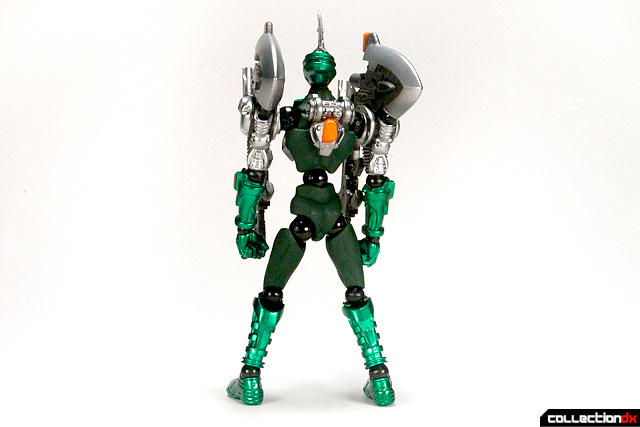 The figure has a decent sculpt although it has no discernible facial features. 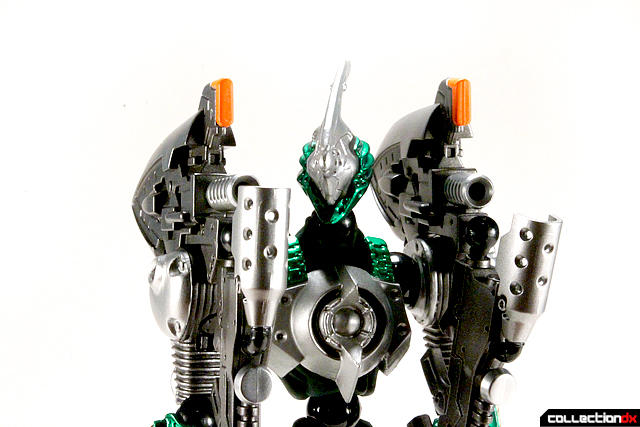 One of the things that really got my attention was this incredible green metallic paint used on the figure. It's really nicely done. I think I almost captured what it looks like in person. 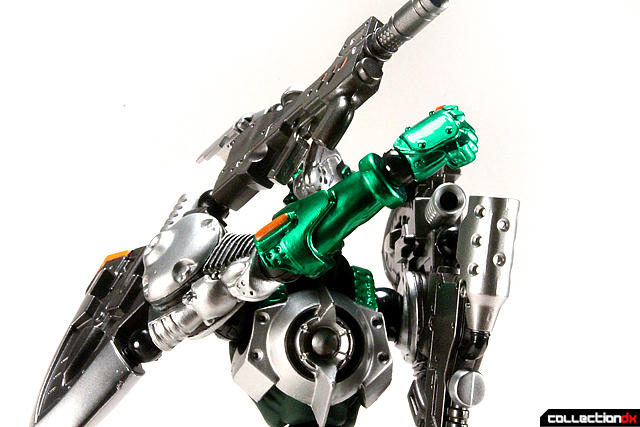 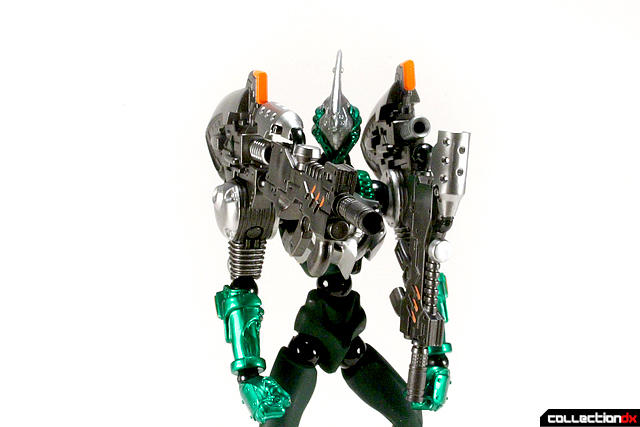 The shoulder mounted weapons can be swung up when you are ready for battle. 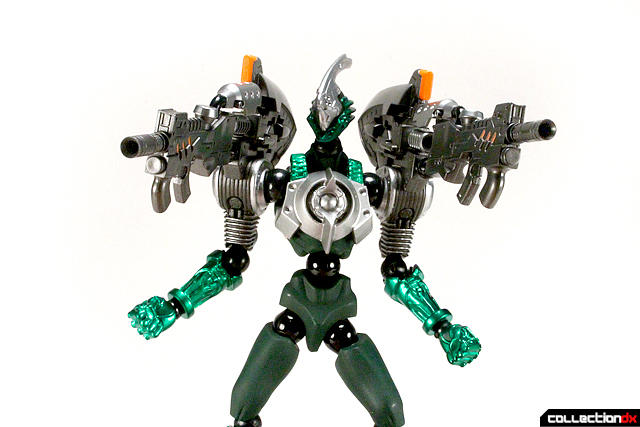 Articulation? How much do you want? It's a friggin' Revoltech. It has tons. 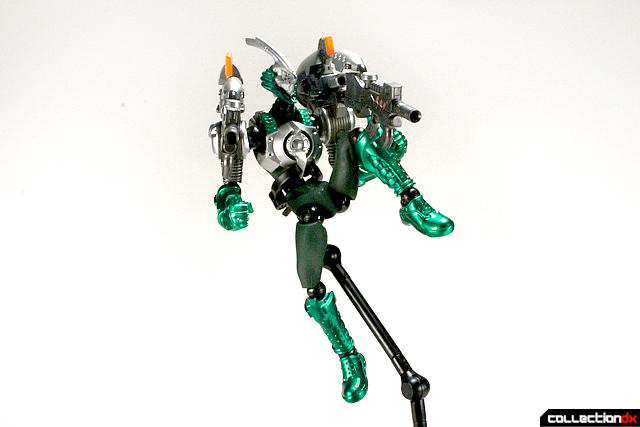 Kneeling poses are cake. He doesn't even break a sweat. 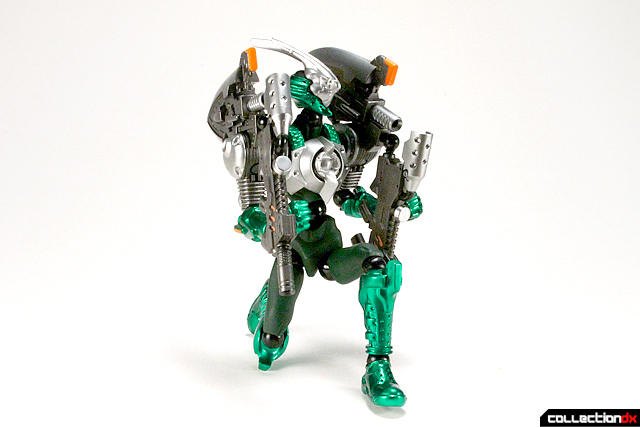 The gun section of his weapons can separate from his shoulders for hand use. 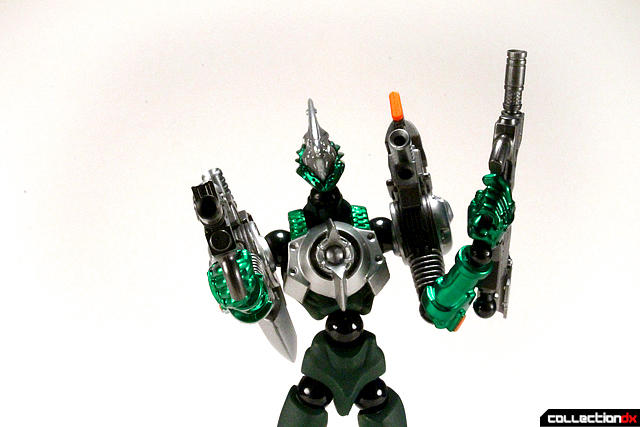 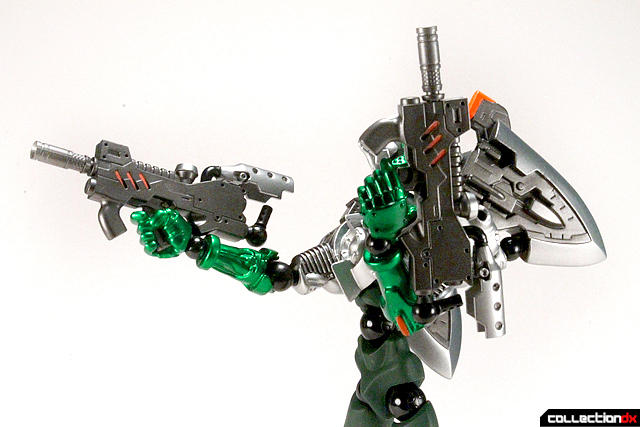 His shoulder pieces can be removed and placed on his backpack like so to make some high-tech wings. This is just me having fun. You can experiment with it as you like. It's up to your imagination. 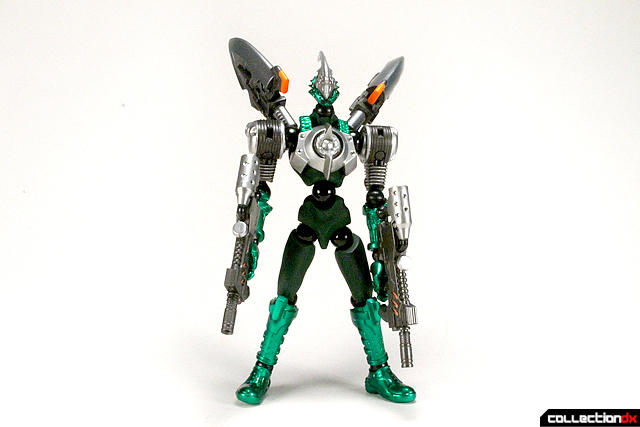 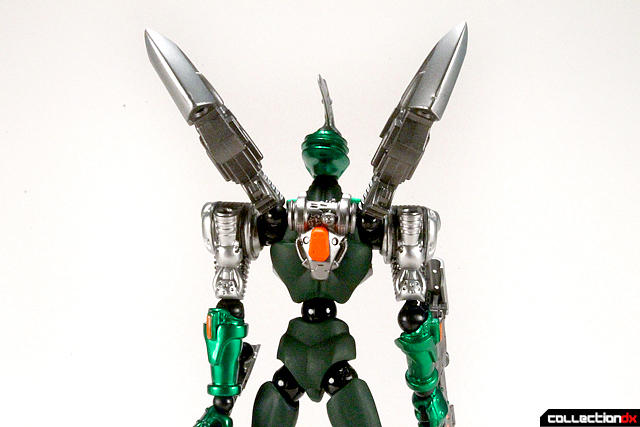 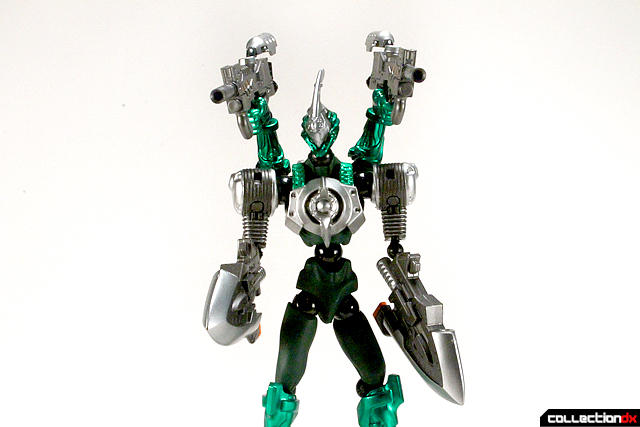 This is my impression of Rose McGowan in Grindhouse. Except not as sexy. 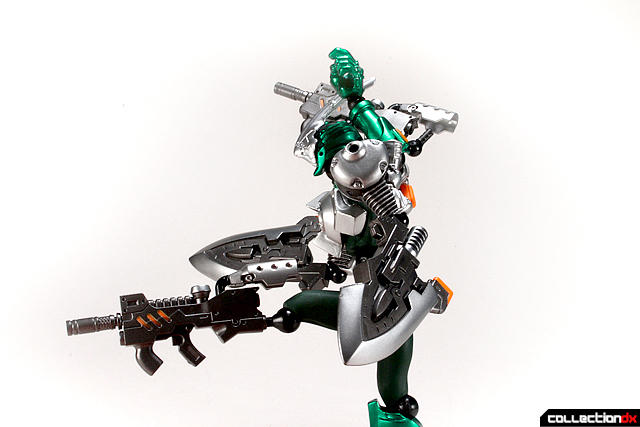 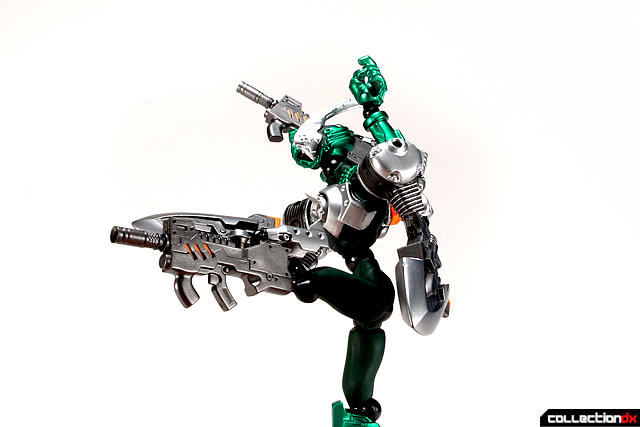 I like this set-up although it requires a stand. The figure comes with an included stand but for review purposes I used my own. The included stand is your typical Revoltech stand in clear with orange print. 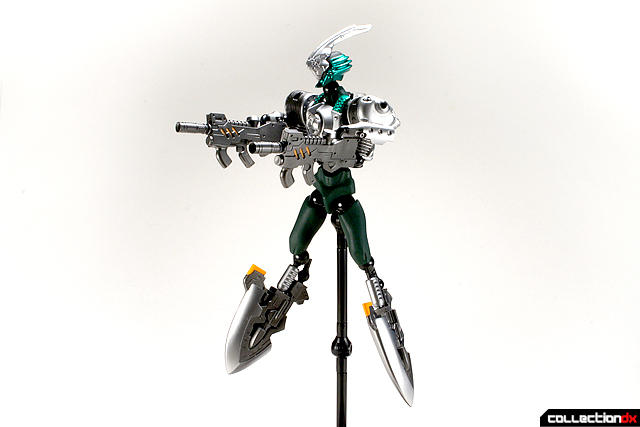 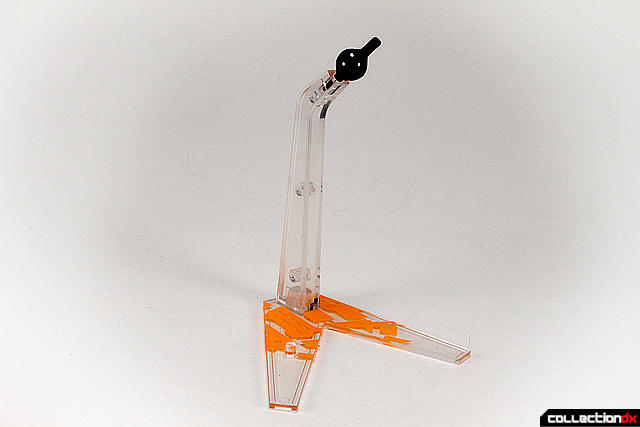 There is a little foot effect piece which is making it's way into a lot of Revoltech toys as of late. As a matter of fact, other toy lines too. To me it just looks like he splashed into a puddle of goo. 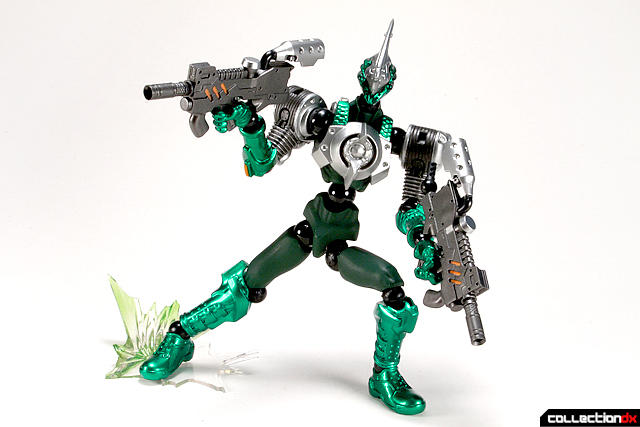 I personally find many Revoltech figures fidgety and frustrating at times and this was no exception. I have no time for precisely adjusting little tiny joints. I'm old. However the idea of being able to just go nuts on these with a couple of other Assemble Borg figures, or other Revoltechs for that matter, really draws me in. What I have just shown you in this review is but a small immeasurable fraction of what can be done when using multiple sets.

It's stuff like this that makes me feel like a kid; I'm totally gona ask mom for assemble borg for christmas!

Seriously though, I dunno what it is about these. They really feel like old fashioned mix 'n match fun. I wish they made more stuff like this, but it never seems to last, like Xevoz. I gotta get into these!

Actually these have been running a couple years now, and have more on the way with no end in sight any time soon, they just come out in small waves. It's kind of a pet project for Toy Tribe (of which Nightow is one of the three designers behind, though he pretty much spearheaded this project, describing it as his "revenge against Takara" for not making the cyborg toys he felt they had promised long ago). Interestingly, I hear lately they have the former Takara Hobby "Cyborg Lab" head of product development Abiko-san (Henshin Cyborg '99, Microman replica series, Microman 2003-2007) under their pay now (although all the product released so far is stuff they've shown on their drawing board since day one...but then they've gone through pretty much all of that now, so who knows what is next...).

I love the concept, and I own a couple, but am entirely disatisfied with how they handle. Almost no matter how I pose them, they come crashing down in the next few days. The joints are difficult to swap, don't hold poses well at their connection pivots (while the locking ratchets don't allow finer posing). They really should be more fun to "assemble". Plus they tend to be a bit pricey for what you get. Personally, I find Figma and even Busou Shinki figures much more satisfying both in value and posing.

Wow this seems to be a really interesting toy! I had seen some toys of these line before, but didn't know they had "lego" habilities, nice touch. Also, the weapons are nicely sculpted. I like this figure.

I just wonder why they didn't show up in some stores... The only place where I have seen these figrues is ToyFreaks.

Well, not this specific one. But Kaiyodo has several Assemble Borg figures at Amazon for about $30 each, which is pretty reasonable (certainly less than you'd pay for the figure at an import store.)