On CDX there have been two other reviews of Aoshima's Captain Harlock's Arcadia, they have been different versions of the pointed flared version of the Arcadia (one by Jerilock, and one by Yours Truly)

Aoshima/Miracle House also released the green, skull-nosed one that has appeared in many other Harlock stories (they are considered the same ship).
Aoshima released around three versions of the blunt nosed Arcadia and two come with a huge blade that mounts on the front ( I owned one, but sold it). This review has a renewal label on the box and is sans blade. 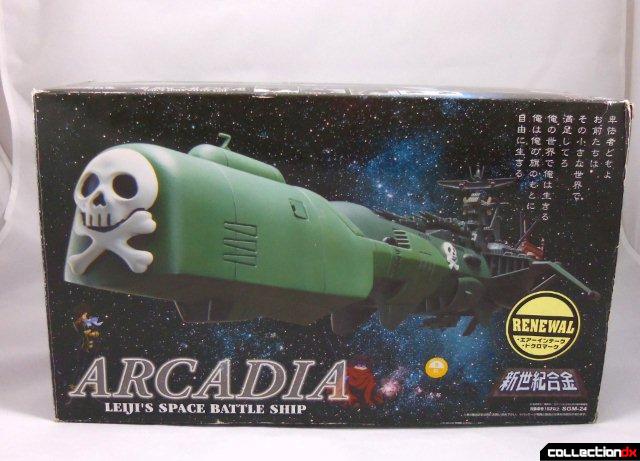 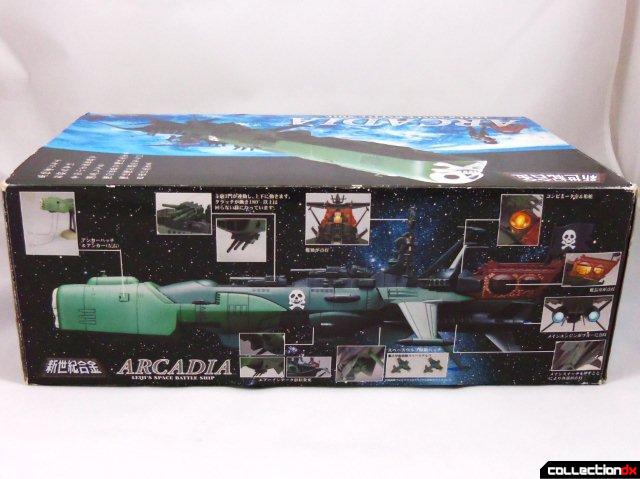 I bought this used for like 50 bucks plus shipping, The price was low because it had some flaws and the listing was poorly done. It was nice to have the Arcadia back in my collection for under 75 bucks. I love both versions of Arcadia (I actually miss the black and weathering versions that I sold... sniff). The blue version picture is from Jerilock's review for comparison (click on link above for full review). 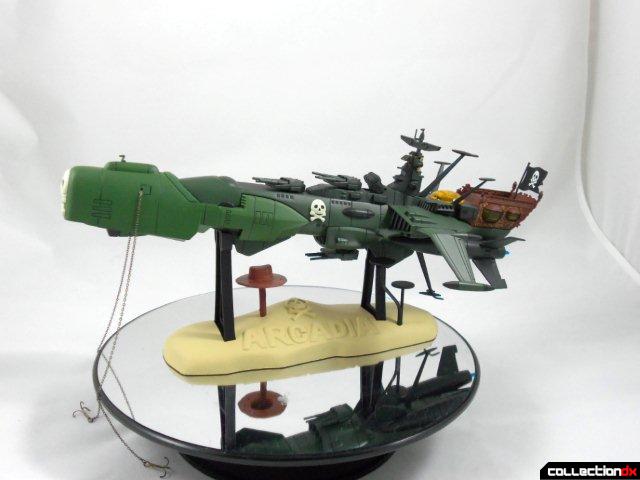 As with all releases, they come with some Spacewolfs (Space fighter aircraft SW1900) and/or Cosmowings, this release only comes with two SW1900. 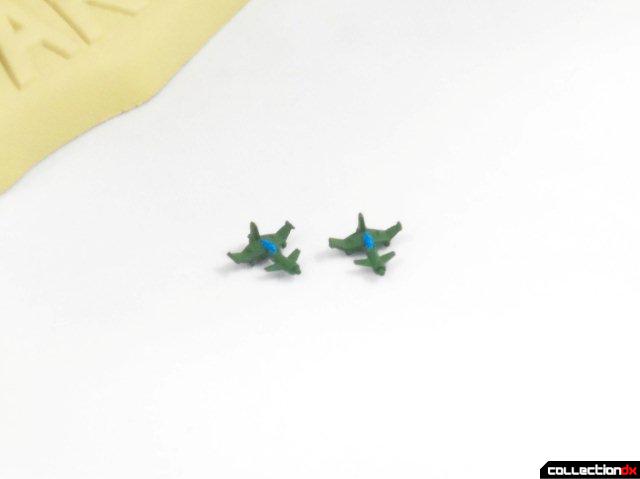 Also this version has the stand that has a hat on it, which shows it had an earlier sale date. 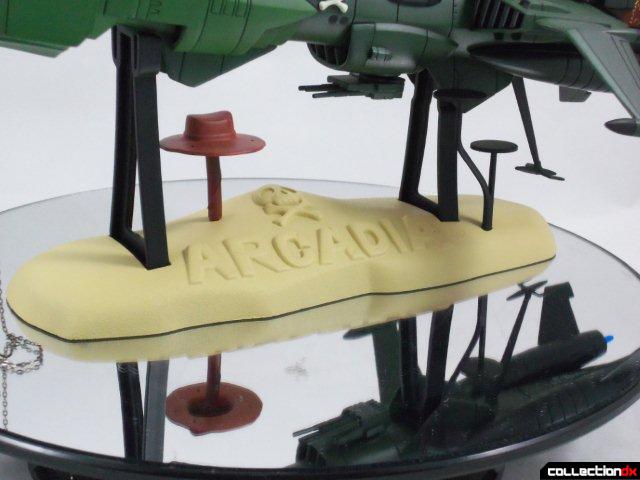 The turrets seem inferior to the SOC Yamato and Andromeda. They swivel in unison, and while swiveling the turrets, all the barrels rise or fall together. Front position equating down and side pose equating raised. I find it a nice idea, but like the freedom of the SOC ship cannons much better. 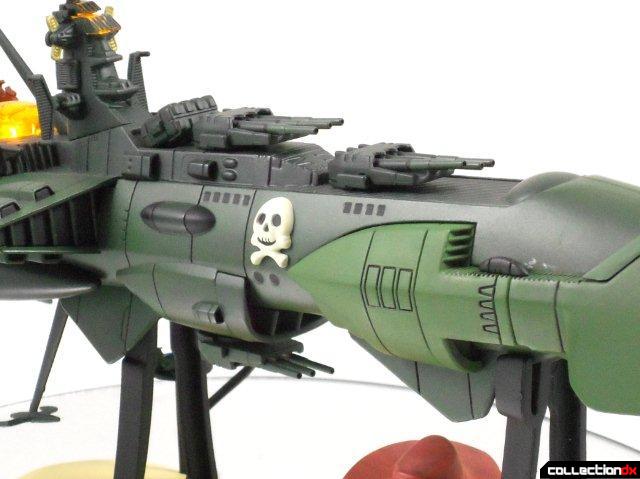 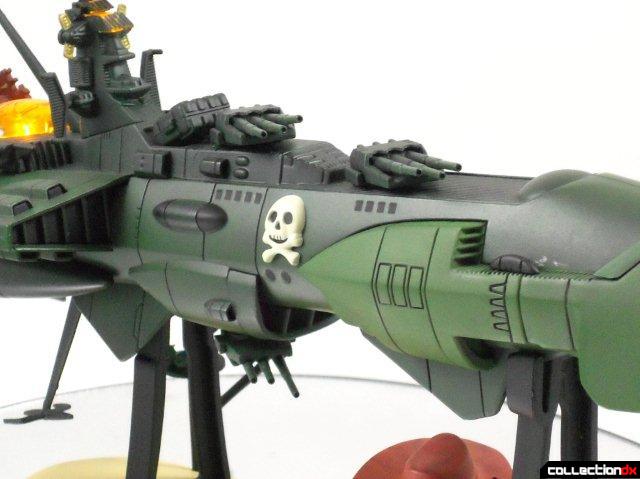 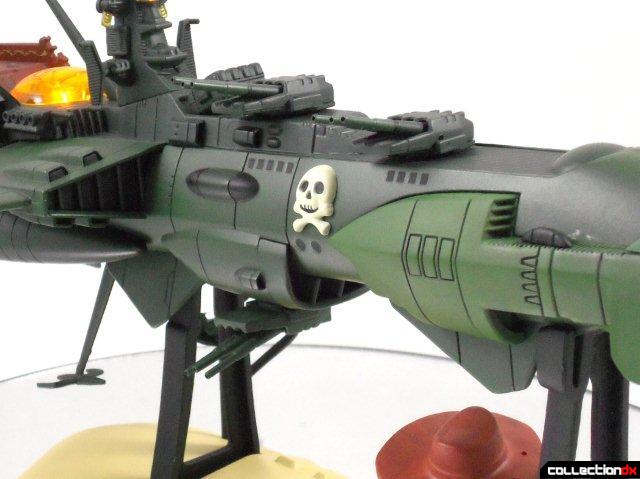 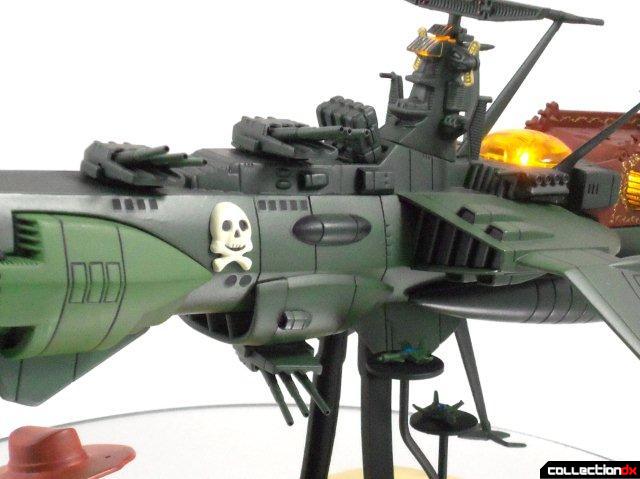 It lights up in the normal places (dome, bridge, engines), but has no sound effects. 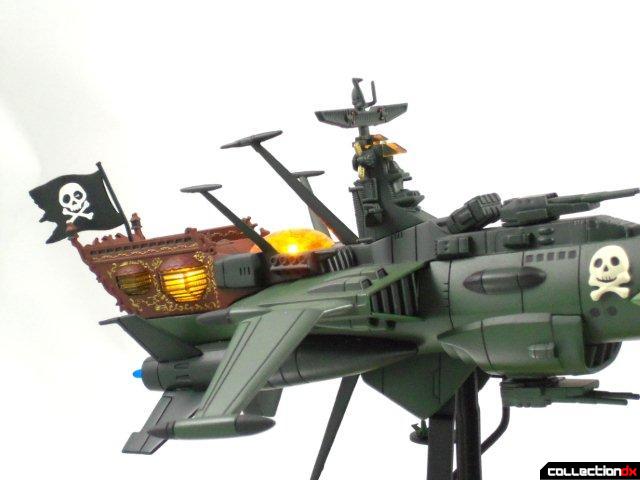 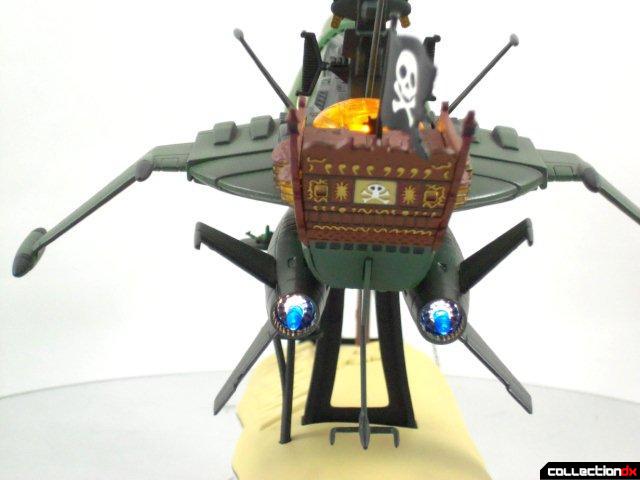 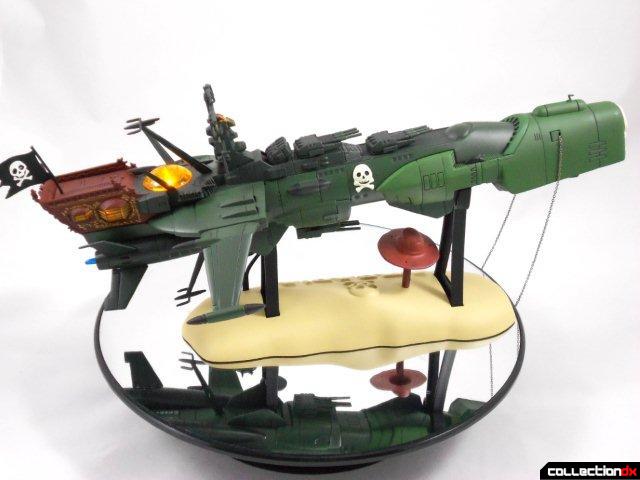 The bridge has mediocre detailing and the rear deck is nice with its pirate flag. 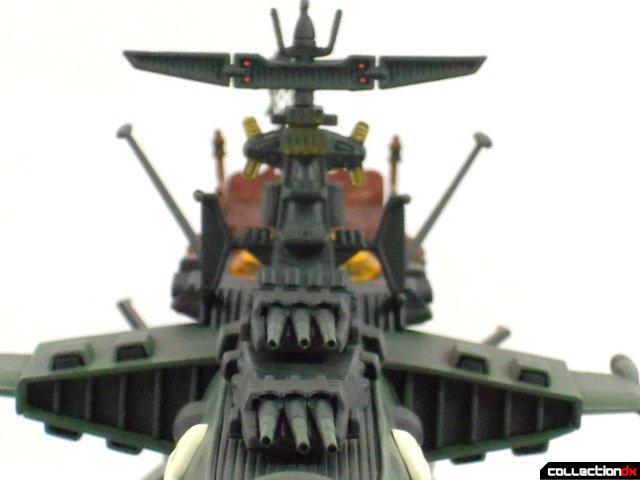 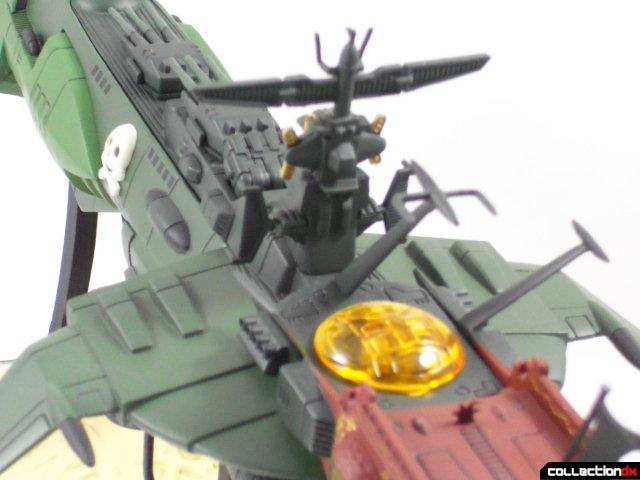 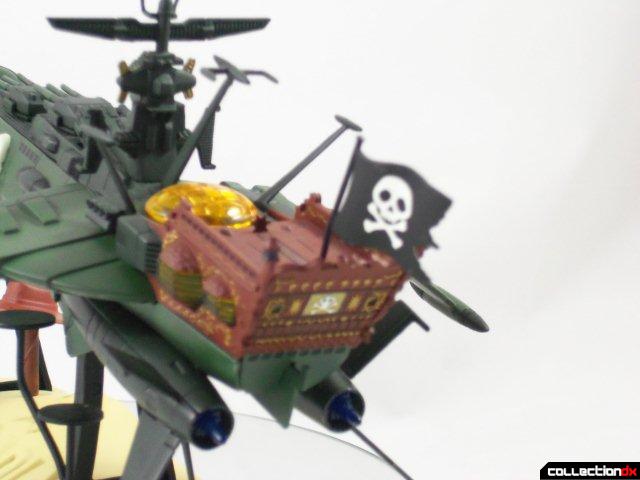 The flaws that saved me around 70-100 bucks were broken anchors (they are triple pronged grey plastic), a broken flag, and they had one dark picture with no box and Arcadia on their messy desk for the listing.
The flag bottom slid back in hole after the nub was removed from the brown base, and for the broken anchors I substituted filed fish hooks (same exact prong shape, and these are metal!) 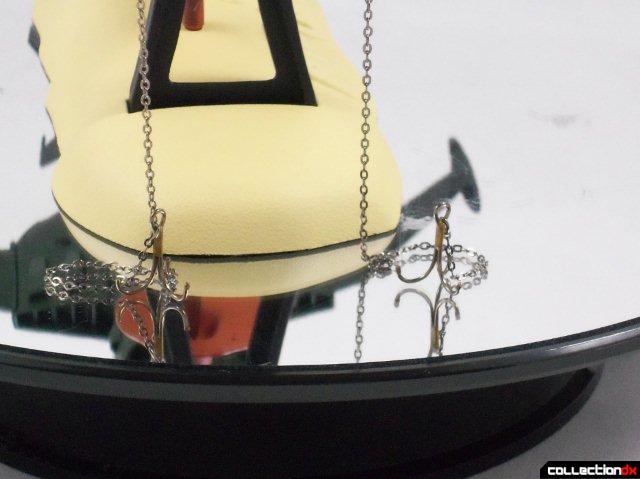 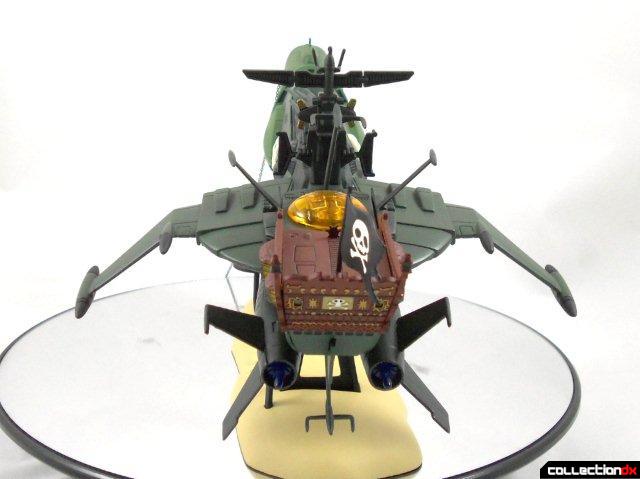 It lacks the quality and detailing of SOC or Marmit ships and is smaller. 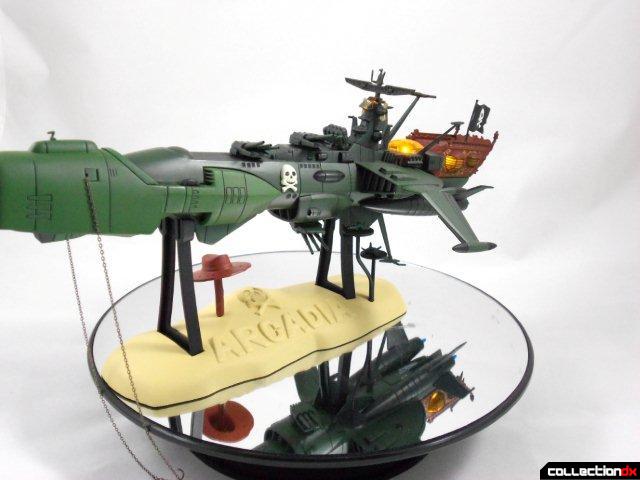 Nevertheless, it has a great look and is from the Harlock Universe, a franchise that rivals Spaceship Yamato. 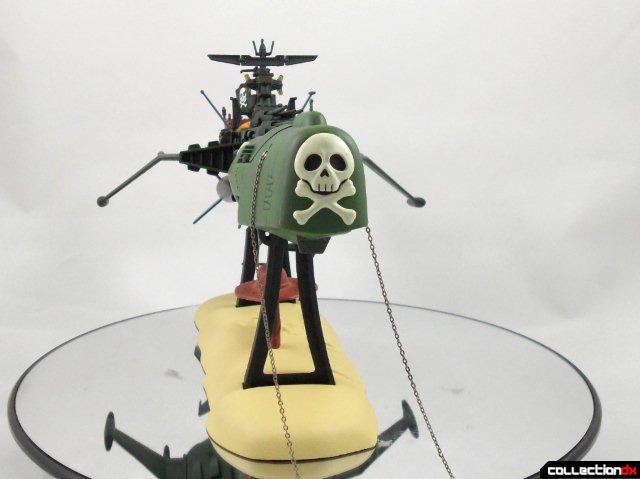 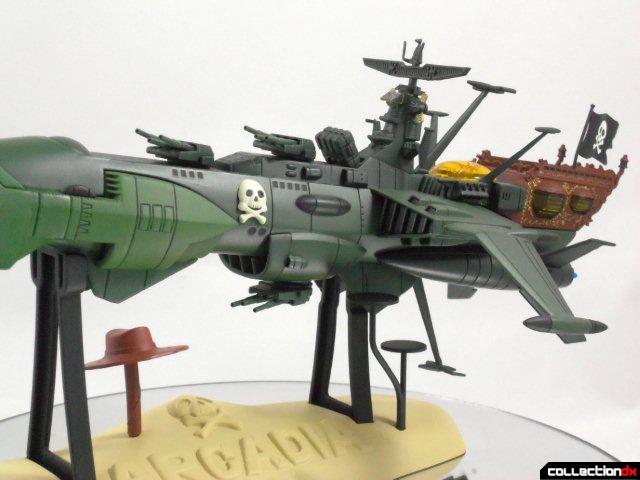 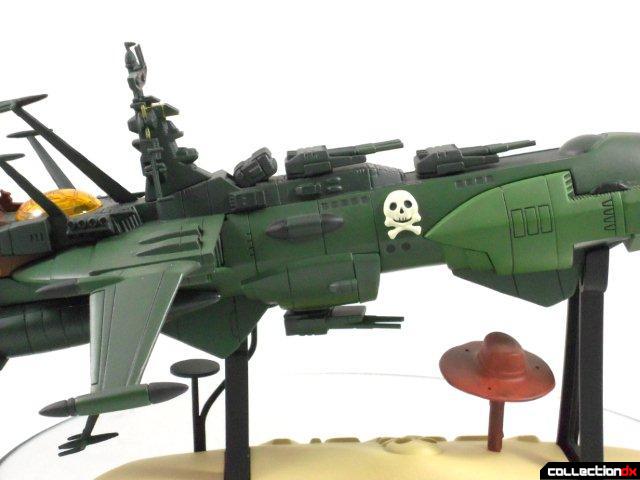 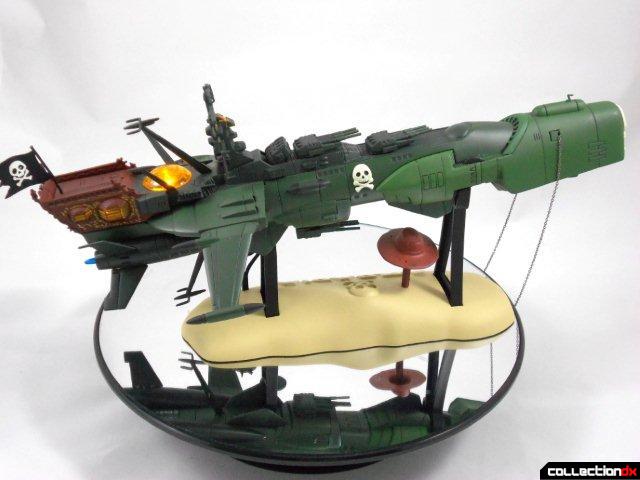 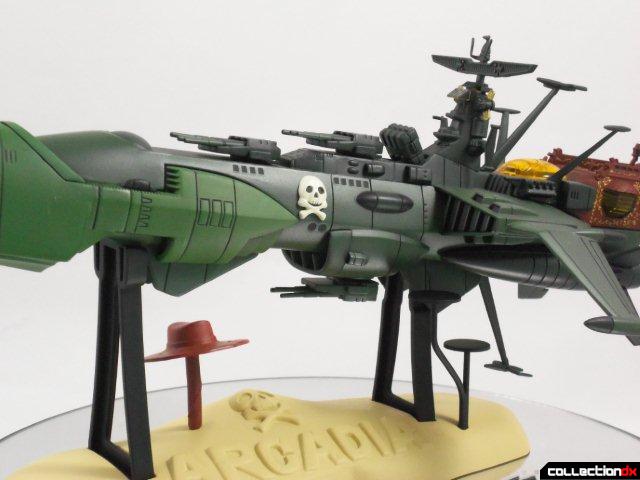 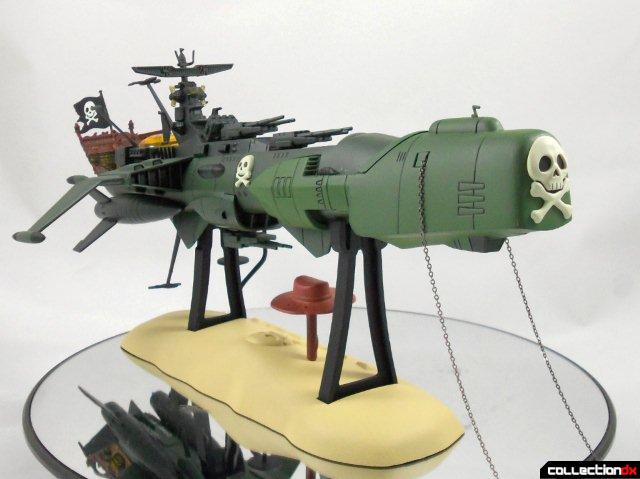 Tab and Harlock... perfect together.

Glad you got a deal on this AJ... In 2009 these things for some reason were going for insane money in Europe. I saw one at my local comic shop in Spain in the glass case for $500euro. At the time you could get three or four of them with that money in US$. When I went back a week later someone bought it, so when I got home to the US I put my green Arcadia up for sale but in Spanish language, the auction ended in three hours and cleared $425.

Now they aren't nearly worth as much by any stretch, getting blown out on eBay and HLJ for $100 or less. Which is great for Matsumoto fans, who are continually fleeced in the vintage and modern toy market.

Thanks for putting this up. I miss this guy :(