Anakin's starfighter was destroyed during the battle of Coruscant when he and Obi-Wan rescued Chancellor Palpatine from the separatists. After Anakin has fallen to the dark side and become a Sith apprentice he is sent by Palpatine to the planet Mustafar to eliminate the Separatist Council. With his own fighter gone, Anakin borrows another starfighter to make the journey to Mustafar where he will carry out his Master’s deadly orders.

Anakin's starfighter comes in the nicely illustrated 30th anniversary box as shown below. I actually really like this packaging. The reason I like this box is because of the designers choice to use a dynamic action illustration of the craft coupled with the pilots face in the right corner. In my opinion this combination seems to complement one another. 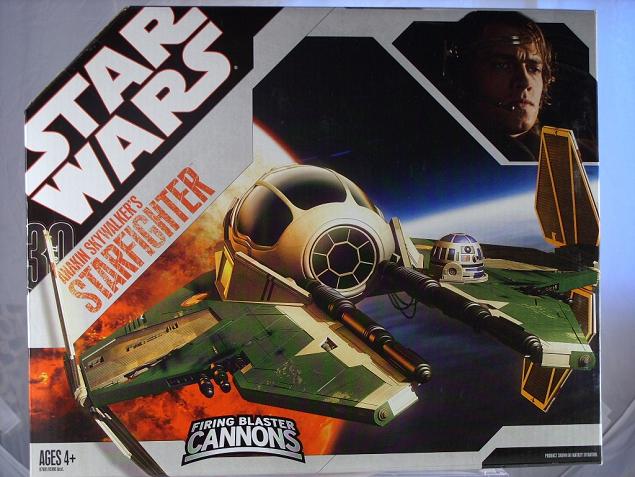 The ship right out of the box requires no assembly and is made from nice quality plastic. Anakin's Starfighter differs from others in this line because it has no stickers to apply. All details are already applied by the manufacturer. This is a great relief considering that Obi Wan Kenobi's Starfigher had a ton of small difficult to apply stickers and Aayla Secura's Starfighter had none. Where is the consistency Hasbro?

The next 6 photos show you a quick walk around of the ship. Some of the highlights I would like to point out are the retractable landing gear, removable R2 unit, firing missiles with release button located on the rear portion of wing. Also, note the great weathering detail and how the front of the cockpit bears a very strong resemblance to a TIE fighter. 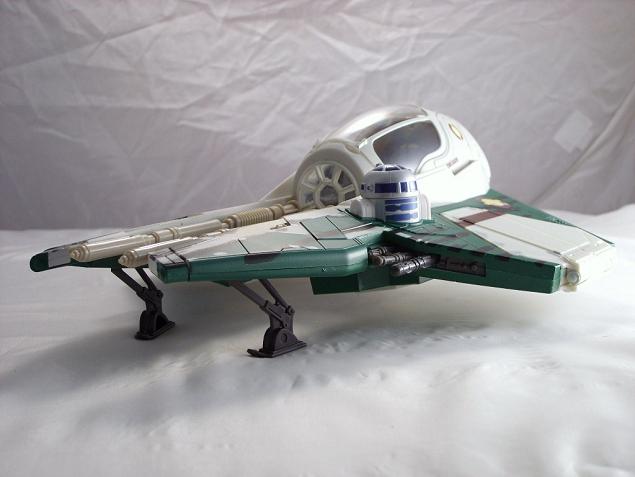 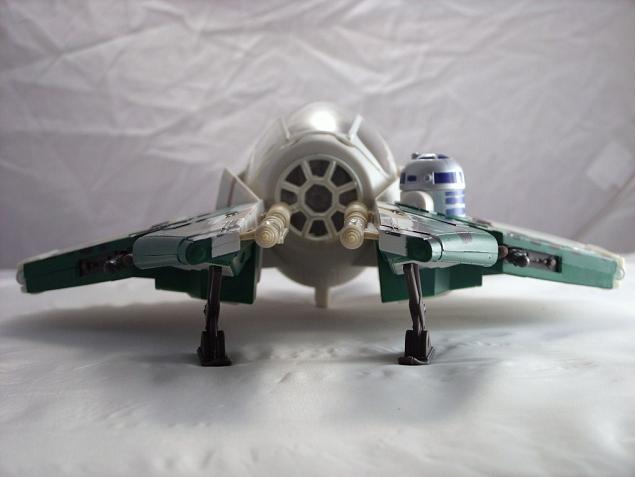 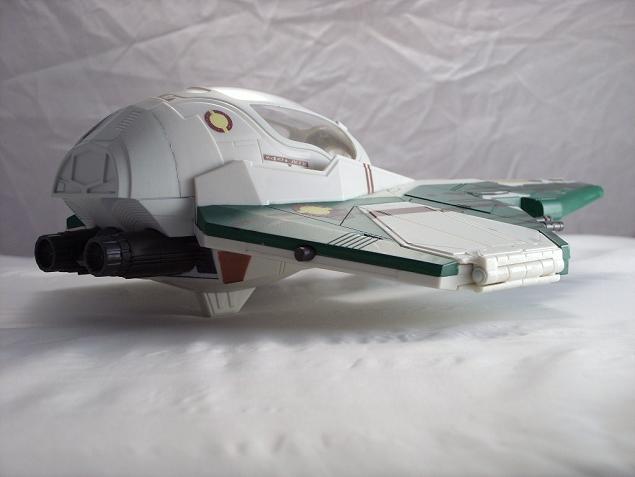 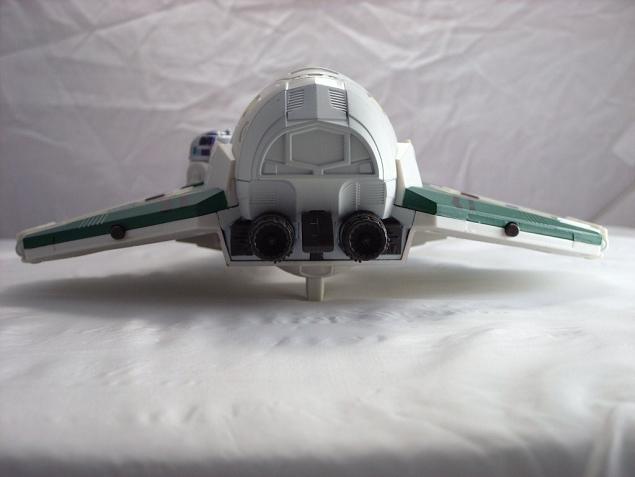 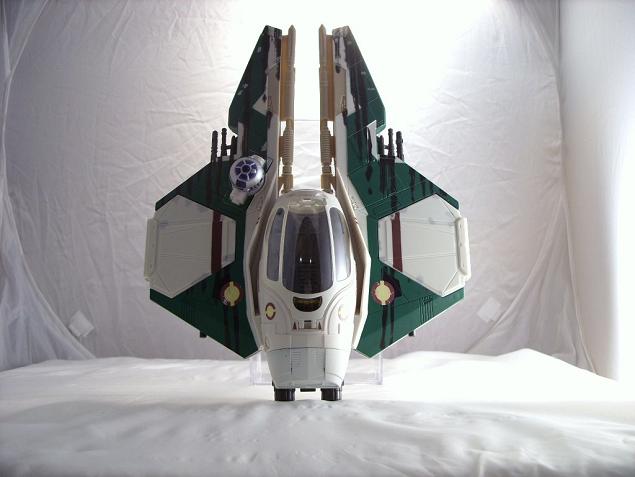 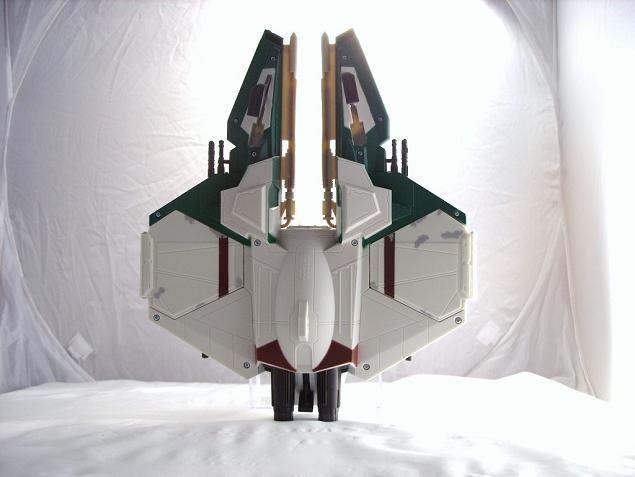 The next 2 photos show the Starfighter with the wings open. The wings are spring loaded are are actuated with a lever located at the rear underside of the cockpit. With the wings open you can really see this ships obvious relation to the TIE fighter. 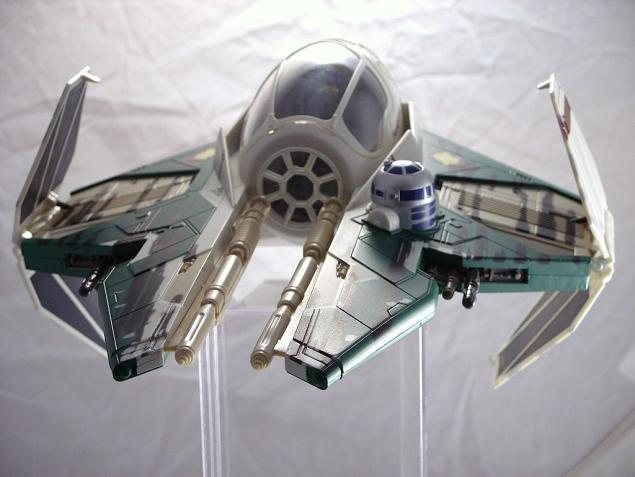 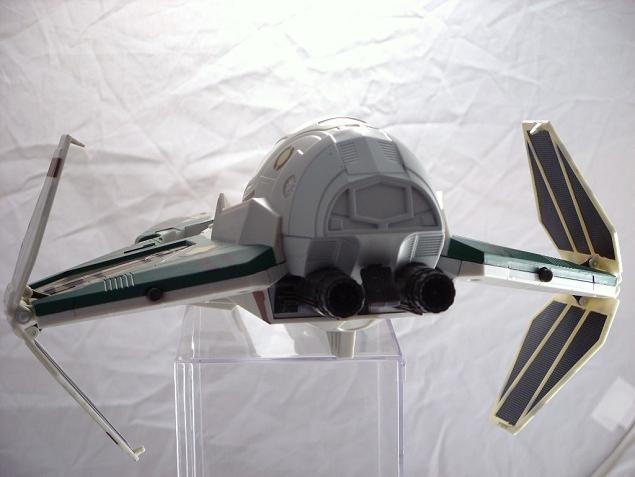 The next 2 photos give you a close up the R2 unit. Do you recognize that familiar little droid? R2-D2 appears on Star Wars ships more times than I can think of. He has got to be one of the most popular characters in the Star Wars universe. You can remove the R2 unit, leaving a void. I thought that maybe the void would accept a full size astromech figure. Unfortunately it doesn't. Its still a nice touch to add to the ship. 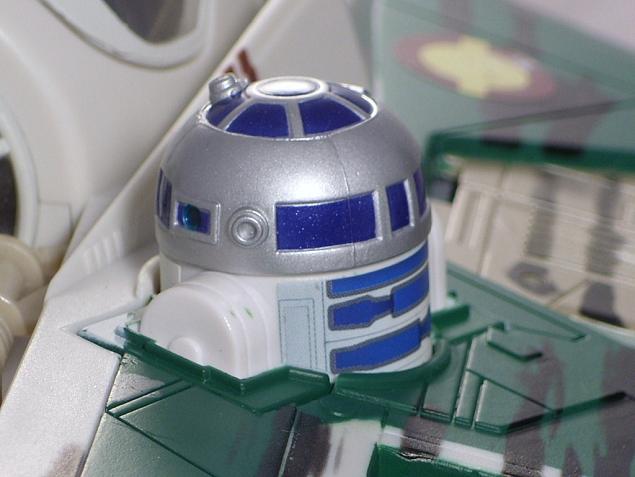 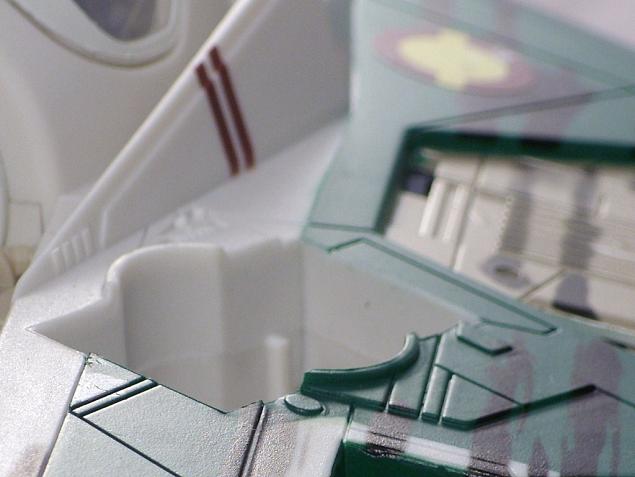 The last photo shows you the canopy open, allowing view of the nicely appointed cockpit of this small starfighter. All the details are factory applied stickers and paint. 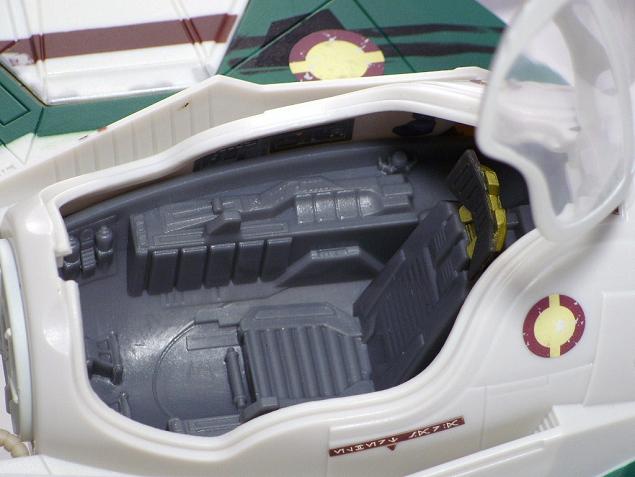 After all the above being said I must say that I like this ship. I think its a very cool design that lends to the history of the TIE fighters lineage. The only thing that I feel is bad about this ship is that Hasbro has made a repaint for almost every Knight in the Jedi order. The "bad" part about this is that each ship has virtually no difference from another. You can see this in the review of Obi Wan's and Aayla Secura's Jedi Starfighters. My advice is just buy one. To make your choice easier, pick one that is piloted by your favorite character or is your favorite color scheme, unless your a completest or have tons of disposable income.