Airwolf was an American television series that ran from 1984 until 1987. The program was centered around a high-tech military helicopter, code named Airwolf, and its crew as they undertook various missions, many involving espionage, with a Cold War theme. 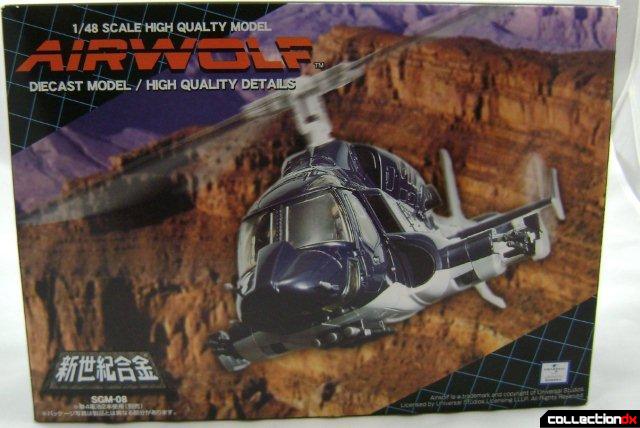 This chogokin is a 1/48 scale toy released in 2006. There were four versions: normal (this one navy/grey), weathering, black/white, black/white weathering, and flat black. I had all version at one time or another but settled on the original like the TV show. 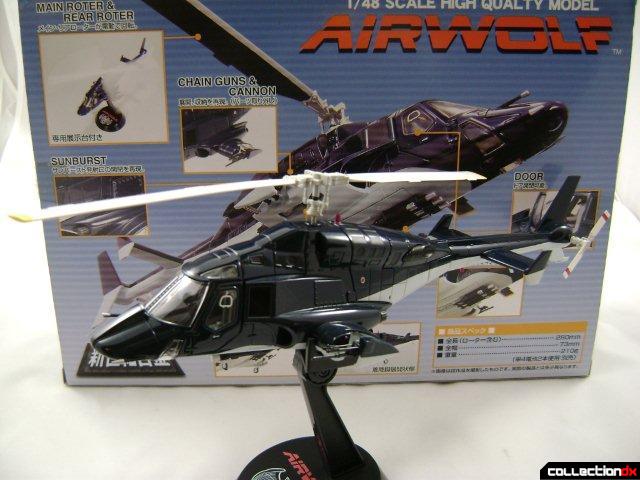 On the back of the box it lists all its accessories. 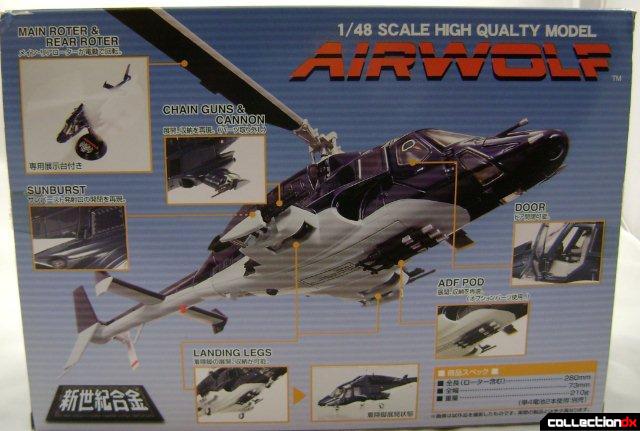 The Copter has great lines and looks great in any collection. 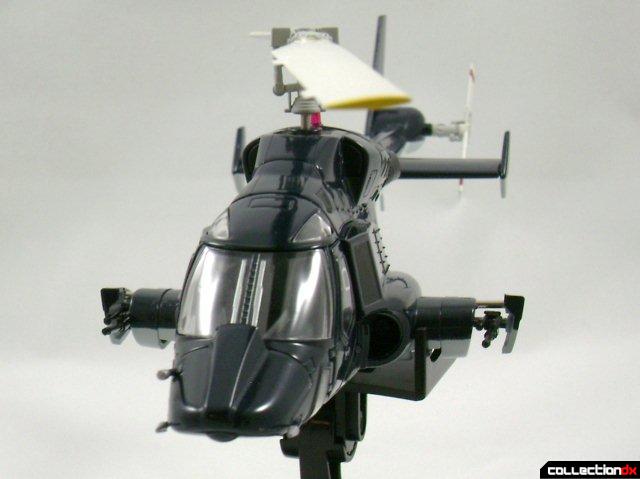 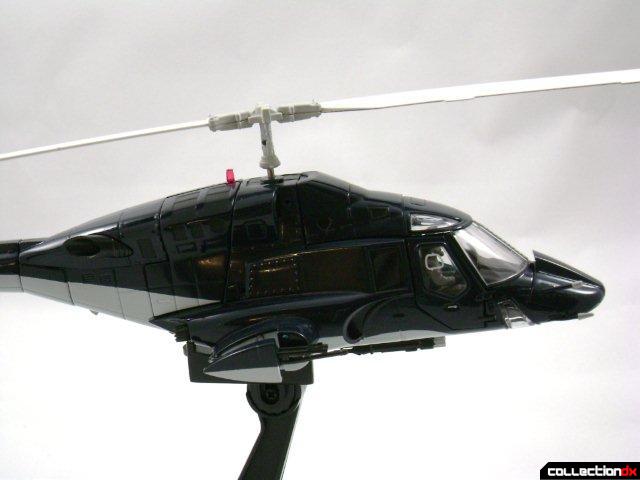 The helicopter takes 2 AAA batteries and both front and back blades rotate. 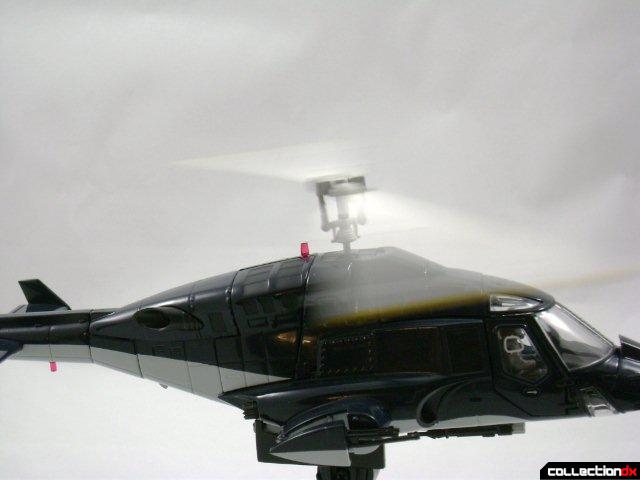 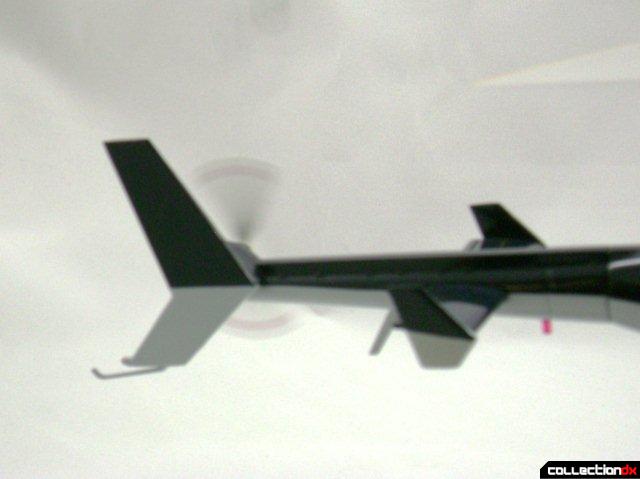 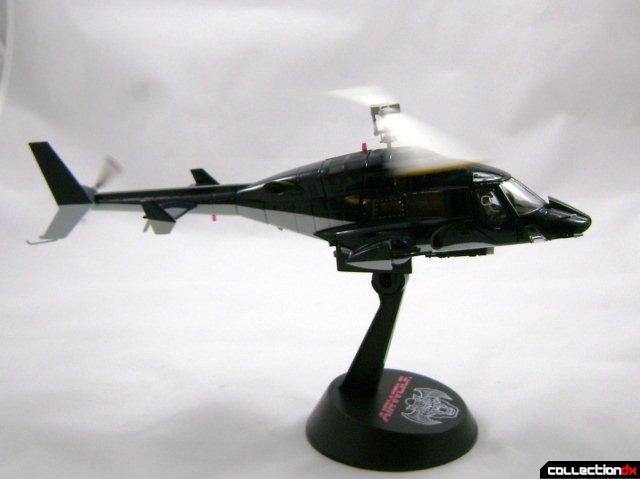 It also has retractable landing gears that work with a sliding (in back) hook system. 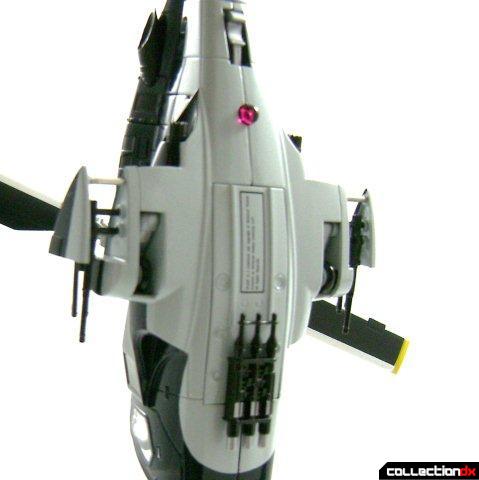 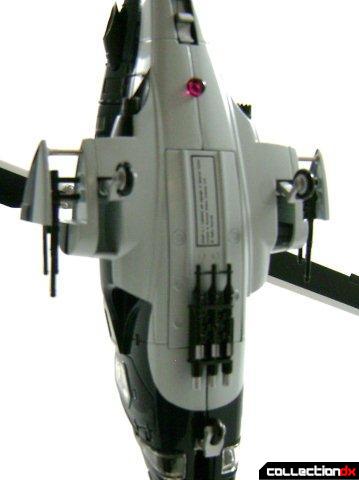 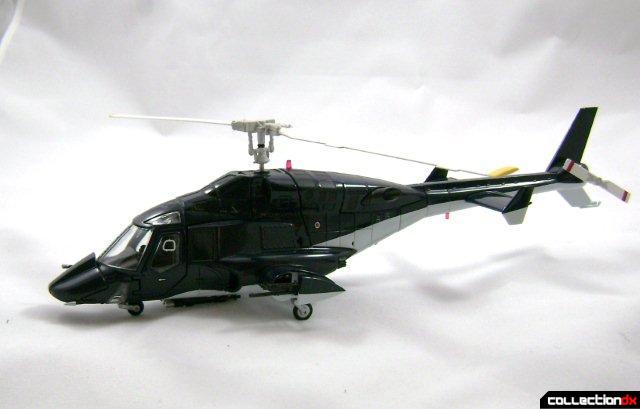 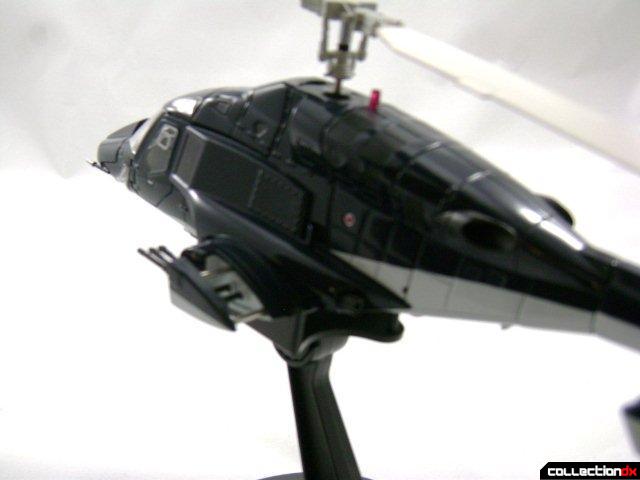 Both doors open and there is even a cute little figure in the pilot seat. 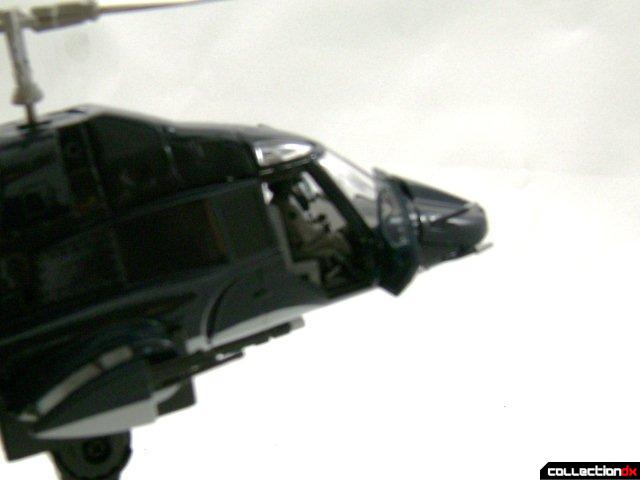 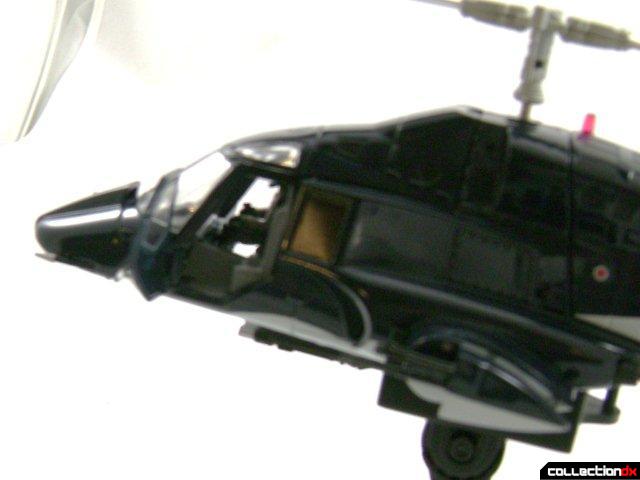 Finally, a stand with an Airwolf insignia that tilts into various flight angles. 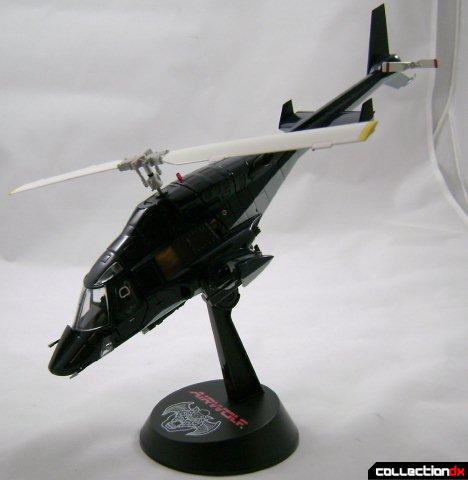 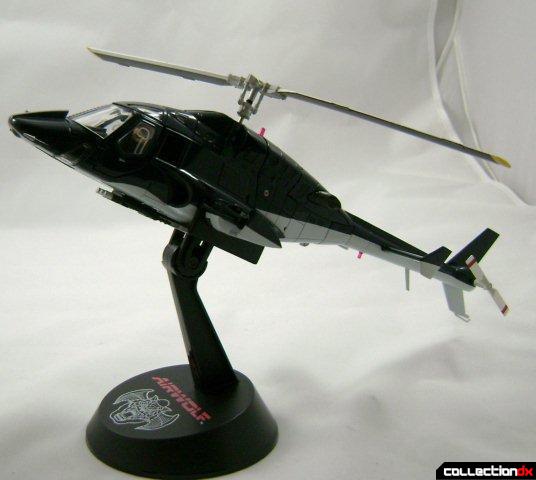 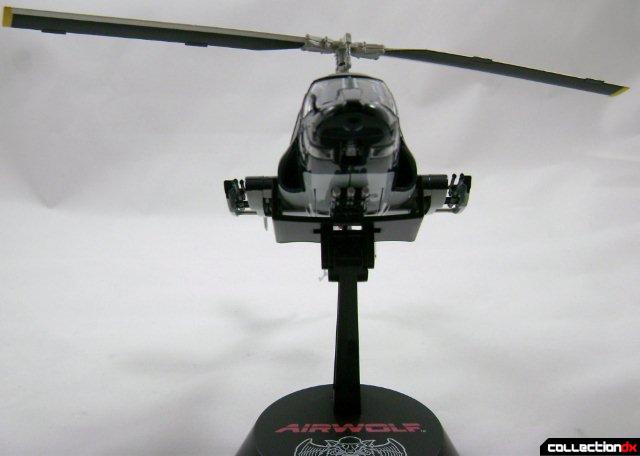 If you can track it down, grab it. I bought mine for around $85 three years ago and as this post occurs I had long sold off all other versions and regret it...they are going for like $200 plus dollars right now and of course I miss them. 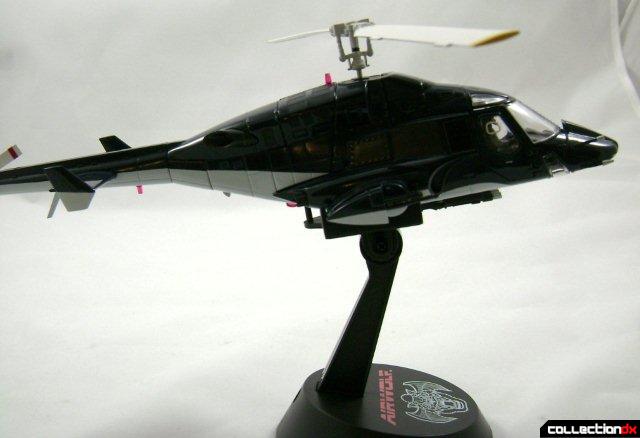 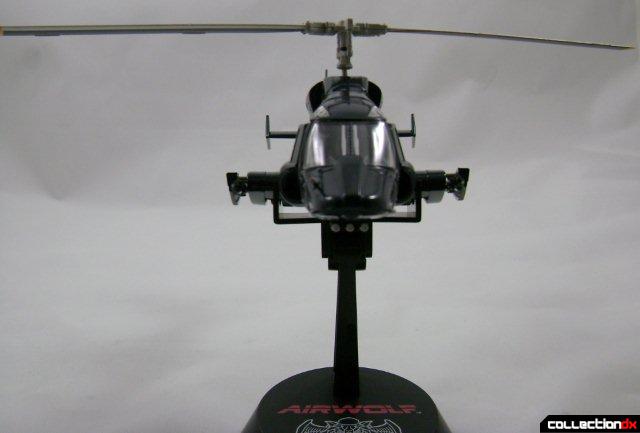 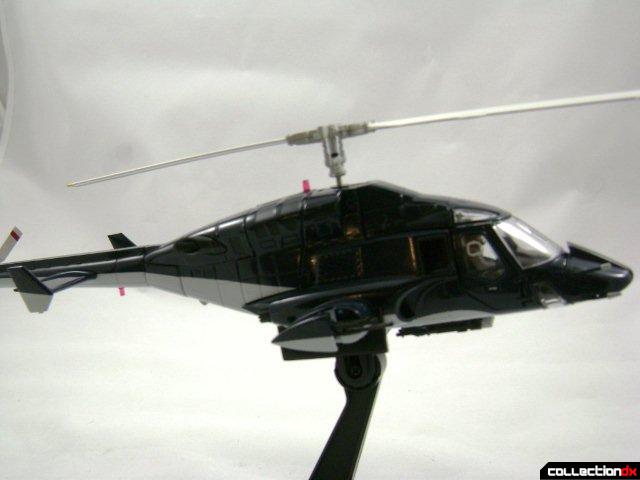 I never watched "Airwolf" (I was too young at the time), but this looks like a great set that I'd like to have!

Say, how long and wide is it?

should use a context piece like atom does...
sorry
around 9 inches long but like 3 inches around long, but "skinny"

Airwolf. Because real men weep gently into the setting sun, whilst playing the cello.

It has the coolest names in TV History:
Stringfellow Hawke
Archangel
Dominic Santini

btw Eva too you to watch the show? man, I'm old :D

Well, I was two years old when it came out, and I was five when it ended. My parents wouldn't let me watch it either. They did, however, let me watch "Knight Rider", which was one of my shows favorite when I was young.

(We have a classic-TV channel now that plays "Knight Rider", so I can re-watch it... and understand what my parents put up with and why they rolled their eyes so much at it.)

EDITED by ADMIN: Keep discussions of sexual dysfunctions OFF our site.

Agreed on the regret, as I kept putting this model off for years, and now, ...ugh.

This diecast is typical Aoshima vehicle. Got some metal, details, and several cool gimmicks.

Guys who come over, will take a look at robots, but will stampede over each other to get to an Airwolf toy!

So much nostalgia. The "super vehicle" shows of the time.
Airwolf, and BlueThunder: helicopters.
Knight Rider, A-Team, Dukes o' Hazard: cars
Street Hawk: motorcycle (does anyone even remember Street Hawk? One of my favorites as a kid.)

What I really want is... The truck from "The Highwayman" and "The Dead reckoning" from the day of the dead...

I was in my 20's when the show came. Jan Michael Vincent was at the top of his game then. Before he turned into a drunk and had a piece of face ripped off by a rottweiller. Ernest Borgnine was the side kick! If I remember right the big thing about the copter was it could a loop to loop 360, which was supposed to impossible for helicopter to do. Which do you think is badder, Air Wolf or Blue Thunder?

...which *isn't* impossible for helicopters, by the way, as long as they roll off the top I believe. Air Wolfs trick, aside from being more heavily armed than the average air force, was that it could travel at supersonic speeds by "disengaging" the rotors (which I also think was actually studied, although using a much thicker rotor to act as a conventional aerofoil at high speed).

And "The Lady" would have Blue Thunder for breakfast. :-)

Both helicopter models would be great on one shelf. Too much coolness for one room.
Blue Thunder had more spying/stealth options, and worked great for downtown, tight quarters.
Though Airwolf did indeed dock down inside an old hollowed out, mined, mountain.

I forgot there was this newsclip of the B.T. toy released that Josh put up back in 2008