My first major foray into the world of robot toy collecting began with many trips to flea markets all around Massachusetts. I used to find lots of old Transformers, Gobots, Gundam toys, and countless bootlegs.

This is one of those bootlegs.

Beginning its life as one of Takatoku's Macross Henkei Type toys, this particular design is notable for being one of the smallest fully transformable VF-1 toys. This toy has been bootlegged many times by companies like Select and many more anonymous firms across Asia. I wish I still had the card this guy came packaged on. It had the worst drawing of a Valkyrie you could ever imagine. It was like someone had seen the infamous SPACE GANDAM V movie and was trying to draw parts of it from memory. Anyways, onto the toy itself. 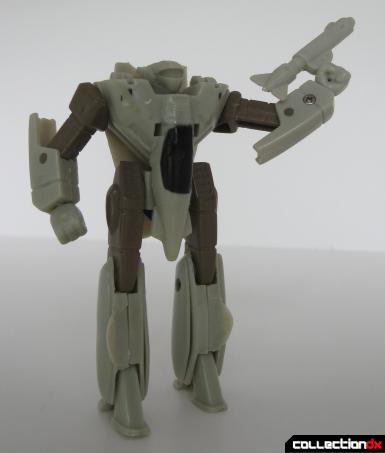 Cast in two very distinctly colored plastics, this guy stands tall at around four inches high. Style wise, this guy is based heavily on the old lineart for the VF-1's Battroid mode. The combination of textured brown plastic with shiny yellow-beige makes this guy look like he'd be blend right in at some 70's house. Its singular accessory is a gunpod that can pegged into either hand. The whole thing is quite sturdy. More so than most examples of this toy I have encountered. I have no idea how old this guy is but his joints have been loose since the day I bought it. 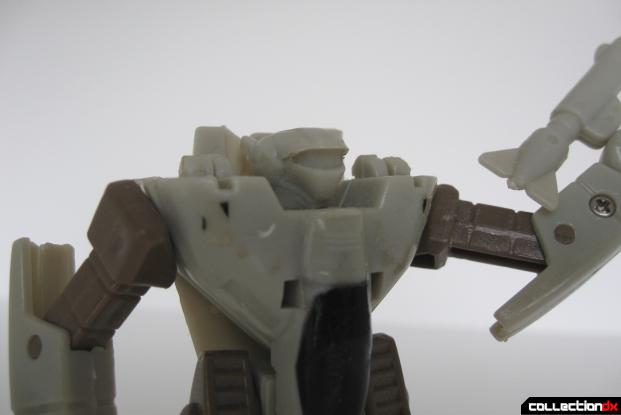 Up close we can see the remnants of stickers that once adorned the chest and cockpit. It had the standard black and yellow crest and a skull symbol. These things were falling off right off the card and baking in the midday sun probably didn't help. The head only has two head lasers as opposed the VF-1S's usual four. As you can see, the arms are attached in the most awkward way possible. 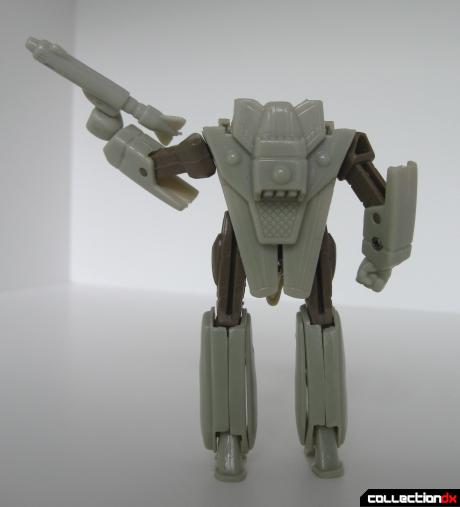 From the rear we can see its hollow limbs and the awful molding of the parts. The air-conditioner sized backpack and wobbly knees complete the image of robust cheapness. 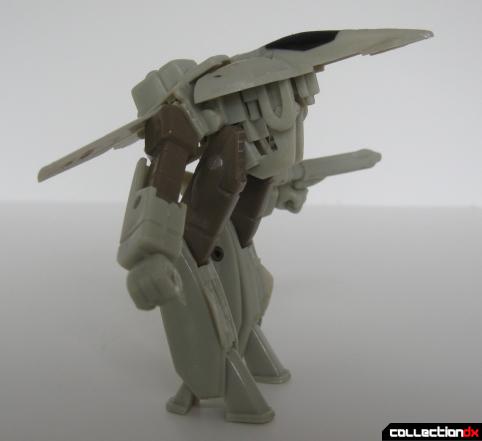 In GERWALK mode it all starts to go downhill. This toy's transformation has always been terrible, but the poorly molded parts make it even worse. The undercarriage is thick and unsightly. 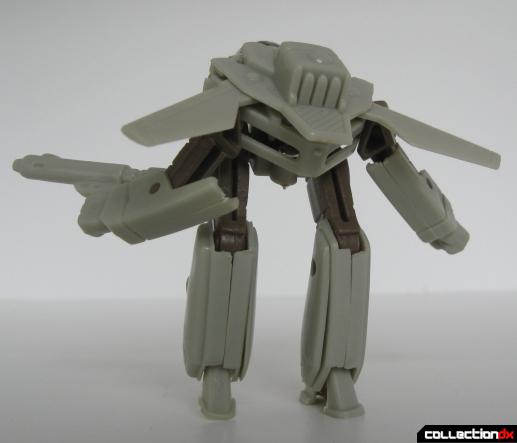 This ugly duck is going spreads its stubby wings and fly I tell ya. 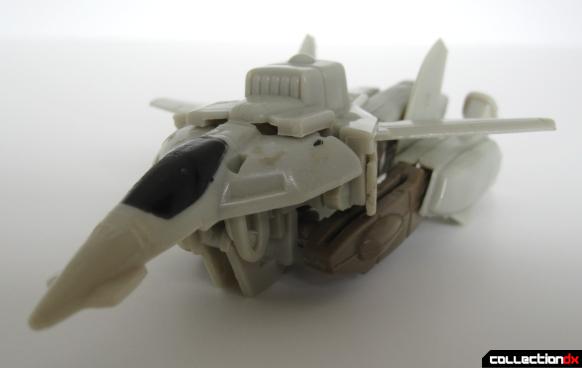 Fighter mode is where it all comes crashing down. Lacking a working backpack, the tailfins of this mode are made out of rotating panels from the shins. The arms slide backwards along the sides of the body and rest loosely between the legs. You actually have to pull the legs out a bit for this mode and the tiny metal plate that keeps them attached constantly rubs against the hip joints. The half formed nosecone juts out like a tiny beak.

Look at that sleekness. 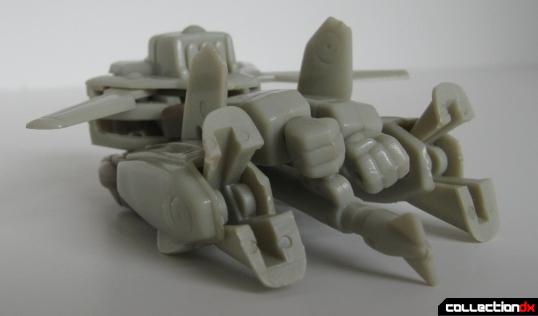 The feet do not collapse, nor do the fists retract. I left the gunpod plugged in to give it some semblance of dignity.

Overall this guy has always given me a sense of morbid fascination. The combination of being some unknown generations removed from its original release and the sepia tones of the plastic make this guy seem like a relic from some bygone era. Maybe one of these days I'll get to handle an actual Takatoku Henkei Type but I've got this guy for now and forever.

11 comments posted
I totally forgot about these!!

Oh man brings back some great memories!! I must of had a few of these! Thanks for reminding me! As crappy as this toy was It was still a very fun toy to play with!

LOL that's a really ghetto Valkyrie.
Would love to have 1.

It brings back alot of fond memories. These were during the times, when getting a "japanese robot toy" was next to impossible as a kid in the states. They are just not popular at all, nor easily assessable. However there is still a small nitch market out there that cries for them. Price is another issue. Who would pay for them to be shipped and what form of payment would they accept?

They served their purpose and i am glad they are being reviewed.

I remember you brought that set to the first summit I attended. When I saw it I immediately thought of my little dude back home.

Hmmm...so that's where the idea of Hasbro's Energon Starscream came from.

Illegal or not, they just keep on ripping each other's hot pockets in the devil's kitchen don't they }>?

I'll be reviewing one of those at some point.

It would be interesting to see you review Energon Starscream & make a comparison w/ your bootleg valk in the near future.

Will you give me an Energon Starscream to review?

I would be honored to sir,

but the thing is the toy is MIA with all the toys, relics and 80s/90s pop junk like old issues of TV Guide, and Isaac Asimov's Science Fiction Magazine, Tandy Computers,etc. that I got stashed up in my attic.

I did this to give my room some airspace.

I'll have to get back to you on that when I find it in my attic.