First off….David is a bastard.

Ok, now that I got that out, a few weeks ago I was pondering the fact that I did not own any toys or model kits of the titular Xenomorph from the Aliens film series. Literally, a week later I was offered to review this Hiya Toys release of the Neomorph from the film Alien Covenant (2017). Since I had never seen either Prometheus or Alien Covenant, I thought this was a good opportunity to watch both films, and well the first statement of this review very much sums up my feelings for that bastard android. 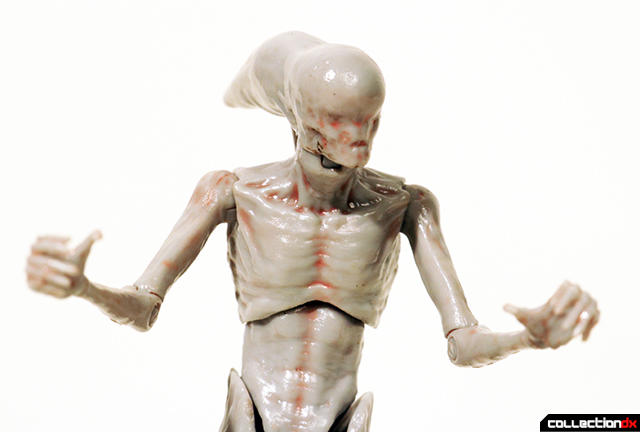 The Neomorph is one of the Aliens the landing crew of the colony ship Covenant encounters during their unplanned exploration of mysterious planet. The Neomorph appears be another evolutionary step towards the Xenomorphs we see in the first Alien film. 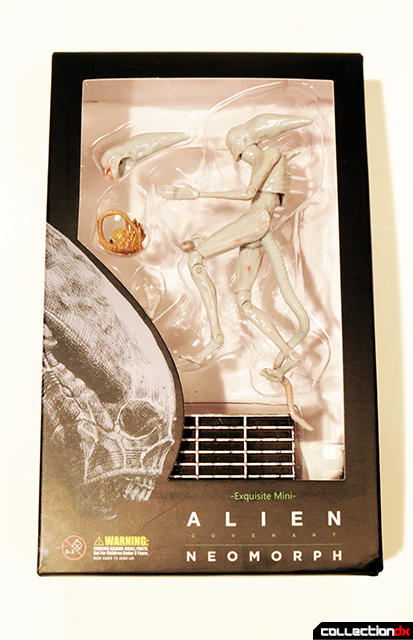 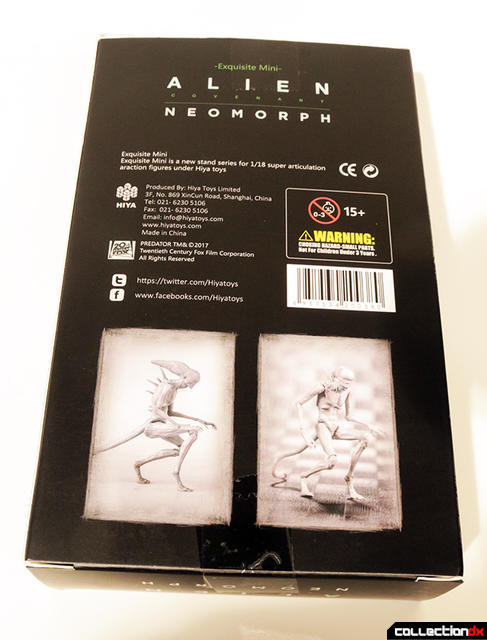 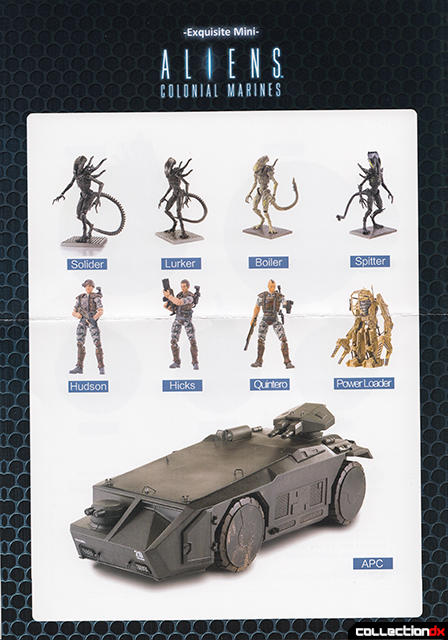 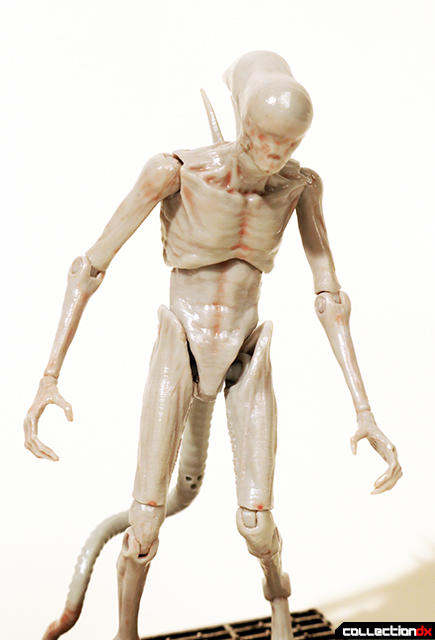 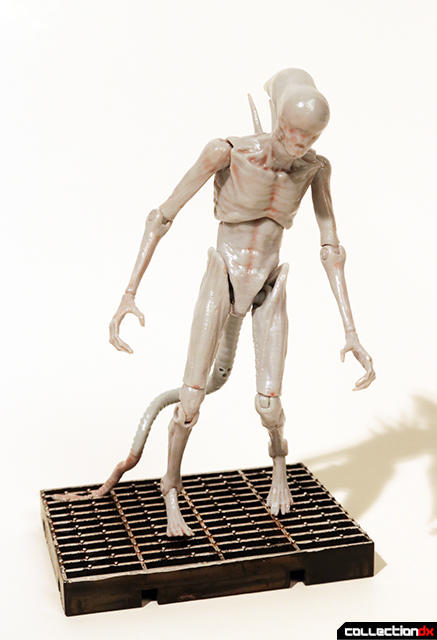 Removing Neomorph from the package, I am very impressed with the sculpting of this figure, the sculptors did a great job rendering the figure in 1:18 scale, with many nicely rendered fine details throughout. The spindly arms and legs are captured the creepiness of the Neomorph perfectly. Be careful of the spikes on the back, they are very sharp. 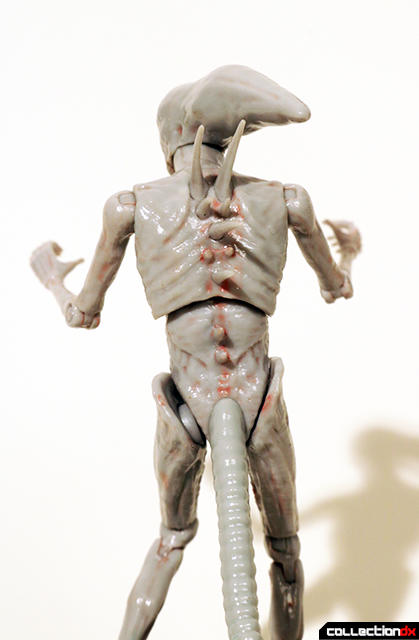 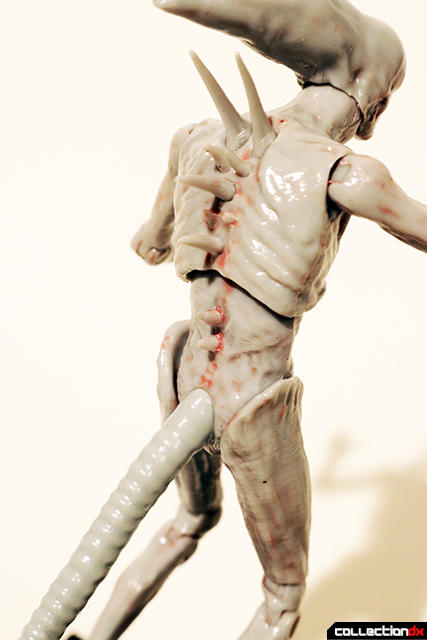 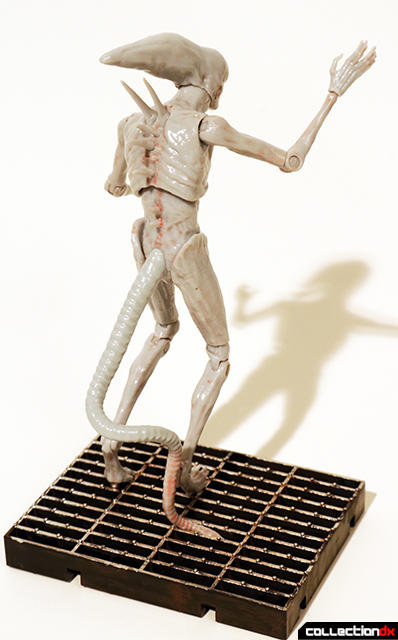 What is most impressive is the color and paint application of the Neomorph. The plastic color used for the fleshy pale grey is spot on. What I did not notice until I shined my photography lights was the extensive clear red blood oozing from its skin. Gross! 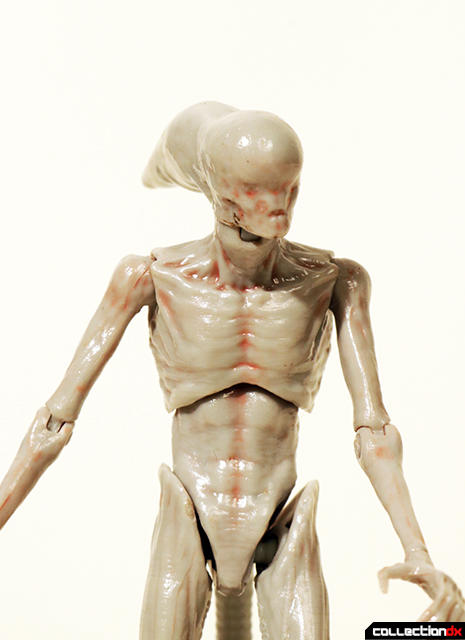 The articulation is rather good for a figure its size and shape. Most novel is the rotation right above the knee, which can get some great poses out of the Neomorph. 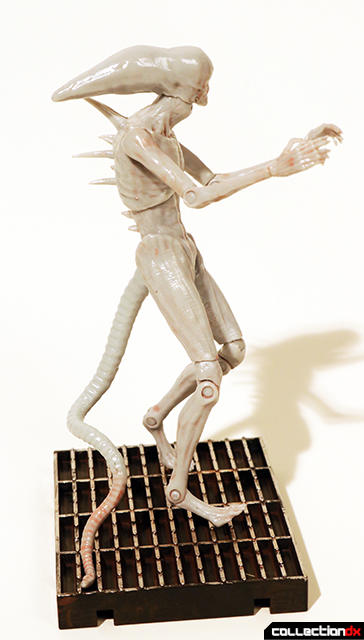 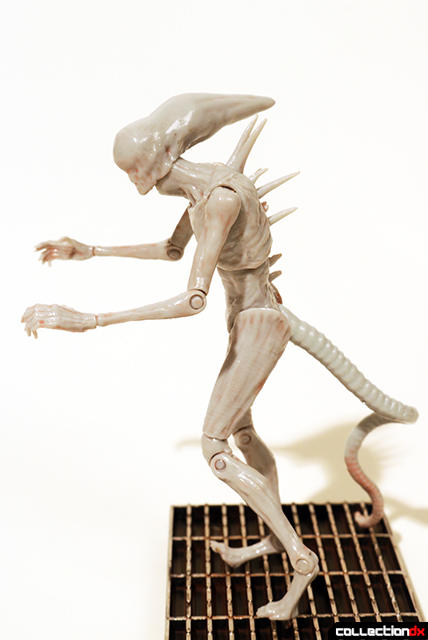 The two options include a set of open finger hands and an open mouth head. The hands are simply pulled out of a ball socket in the wrist and switched out with the second set of hands. This is one of the few places where I can easily see a part breaking, since the ball attachment in the wrist is delicate and much pressure is used to pull the hand off. In my opinion just decide what hand you like the most and leave them on. 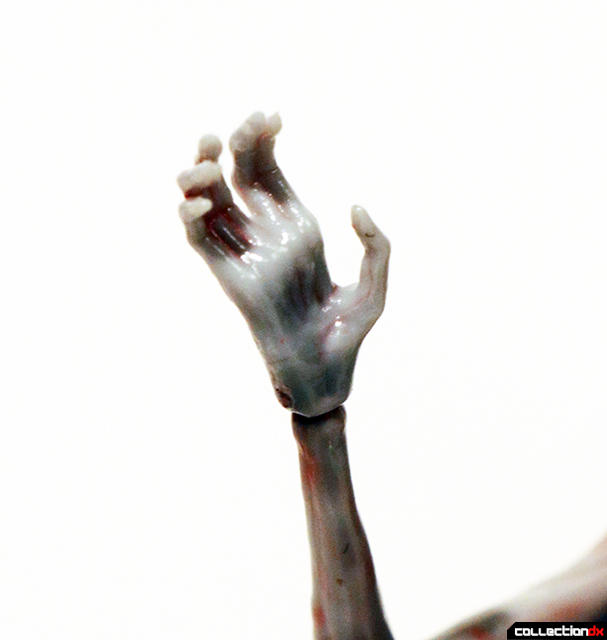 The optional head has many great creepy details. Seriously it would be difficult to decide which version of the head is the best. 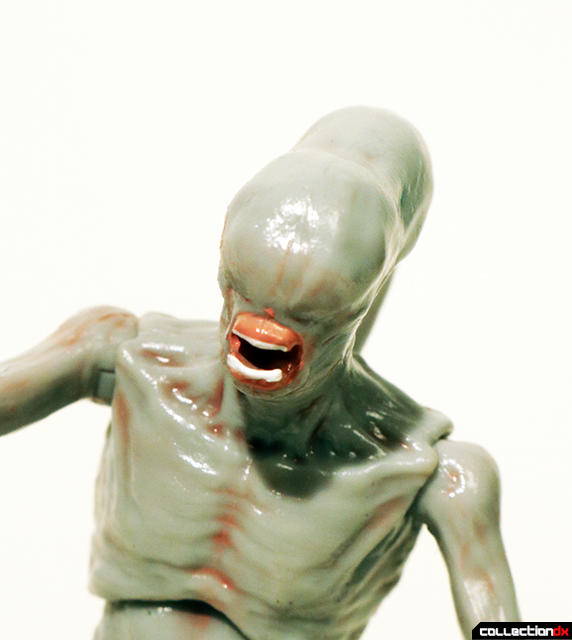 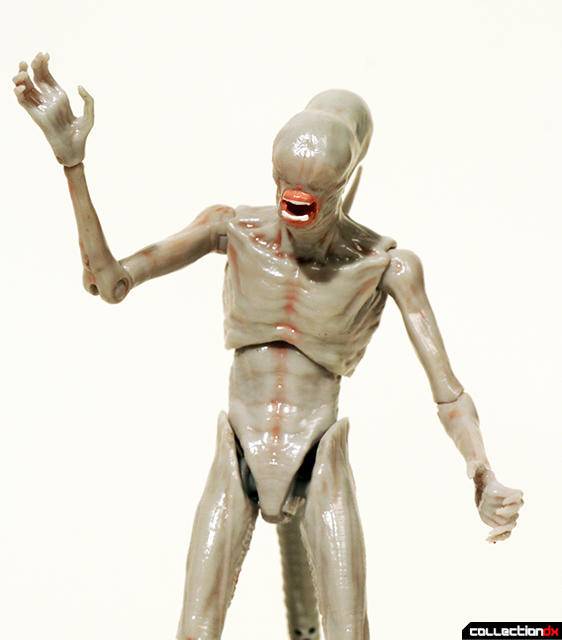 One of the coolest features is the inclusion of a 1:18 scale Facehugger. You cannot go wrong with this addition, the sculpt, color and all usability is top work. Since it is in the scale of numerous other toy lines you can have a lot of fun with it outside of your Alien collection. 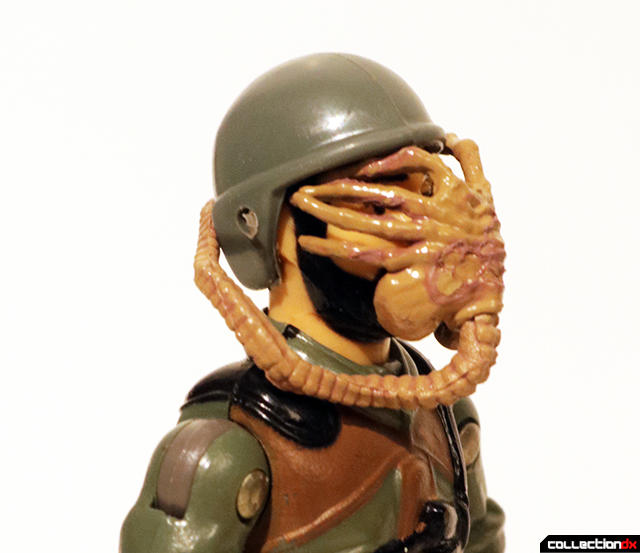 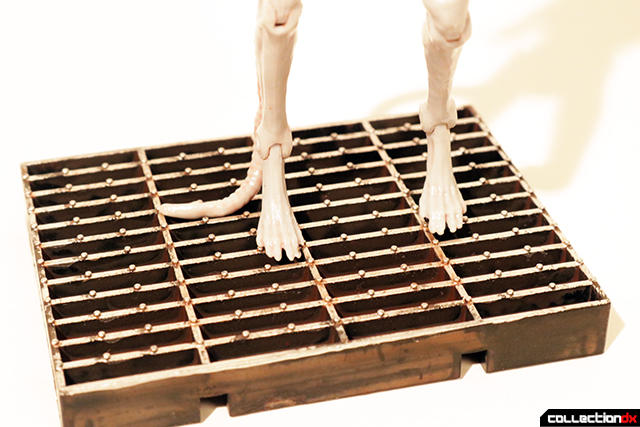 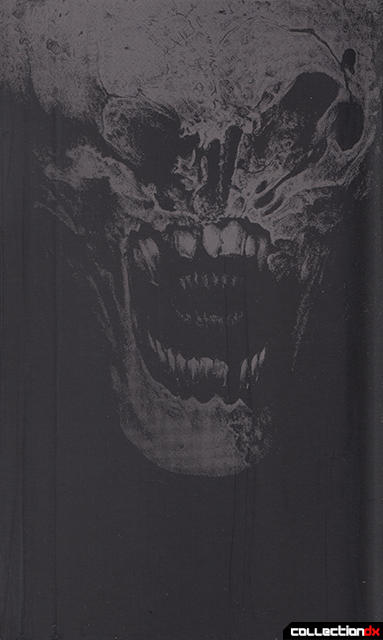 A small illustrated card is included to be attached to the back of the stand.

Another issue was when I pulled the figure out of the package the left leg was warped, which is easily seen in the photos above. This can easily be fixed by running under hot water and bending back in place.

Overall this is a fantastic figure. Having watching Alien Covenant, Hiya Toys Limited perfectly captured the unsettling creepiness of the Neomorph as seen in the film, which is quite an achievement considering the scale. Considering the reasonable price point, you can’t go wrong with picking this Neomorph for your Aliens collection.

Review and Photos ©2019 by Leonardo Flores and CollectionDX. 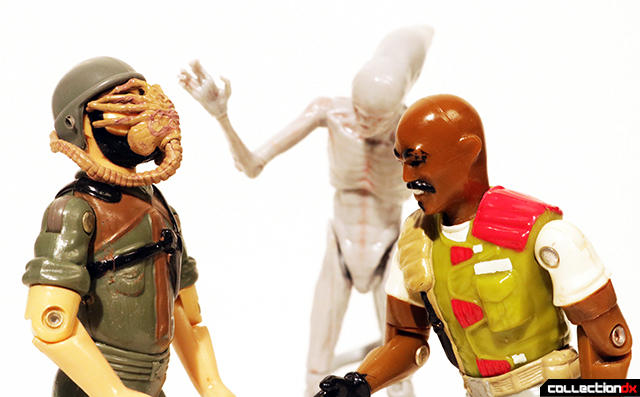