I really didn't want to use the overused and generic "Great things come in small packages" bit, but in this case, why not? It's Great Mazinger and he comes in a small package. A beautiful one at that. Fewture does a great job of capturing that exciting look with bright colors, metallic foil and black background. 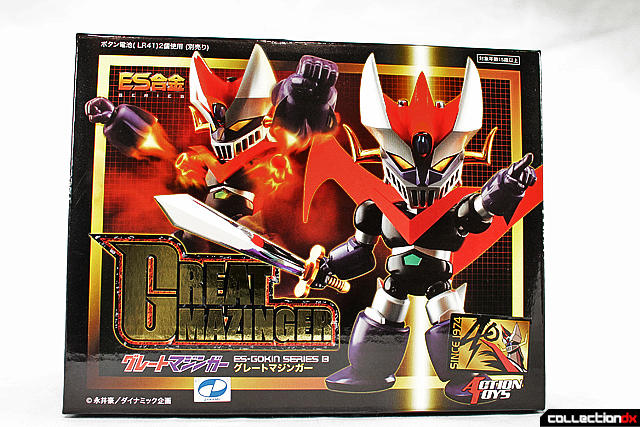 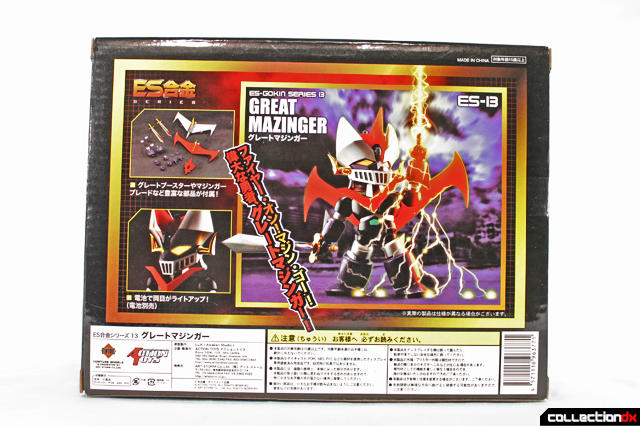 Great Mazinger comes straight out of the box sans Brain Condor similar to how Mazinger Z has a Pileder. 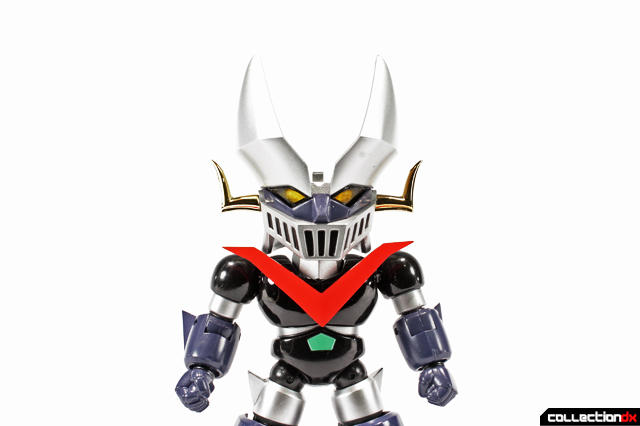 But fear not, one is included! 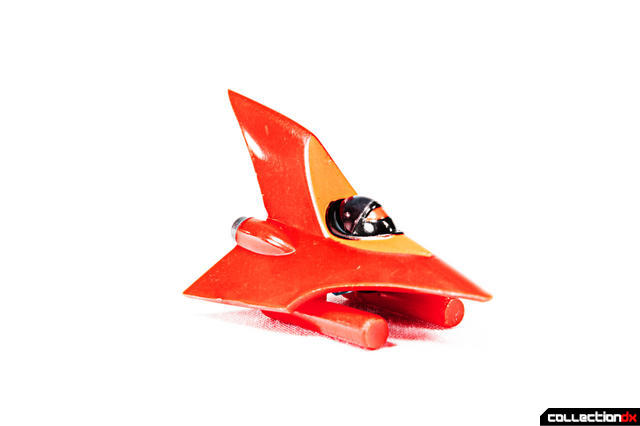 By forcefully docking (at least on mine) the Brain Condor onto his head, you will activate the LED feature so long as you have already preinstalled 2 LR41 button batteries which like all the other releases, are not included. 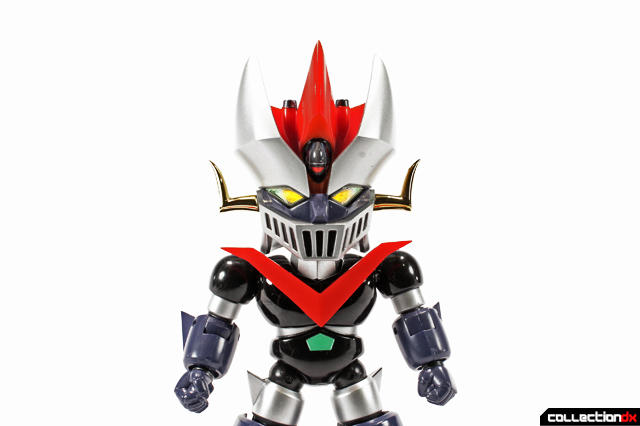 Fewture's style of SD seem to keep the head and body proportions balanced but either enlarged or shortened giving this figure a rather nice appearance instead of making him tubby and exaggerating only certain parts to create the SD effect like other SD versions of him. 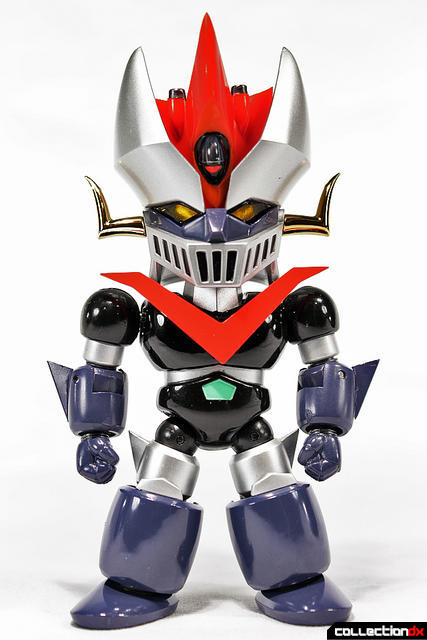 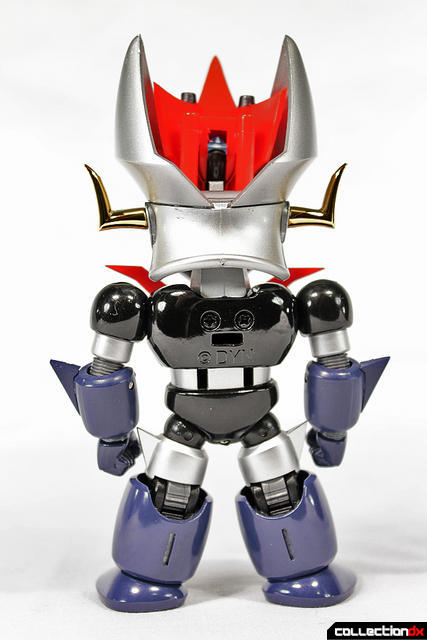 The set comes with a Scramble dash which is like Mazinger Z's Scrander. 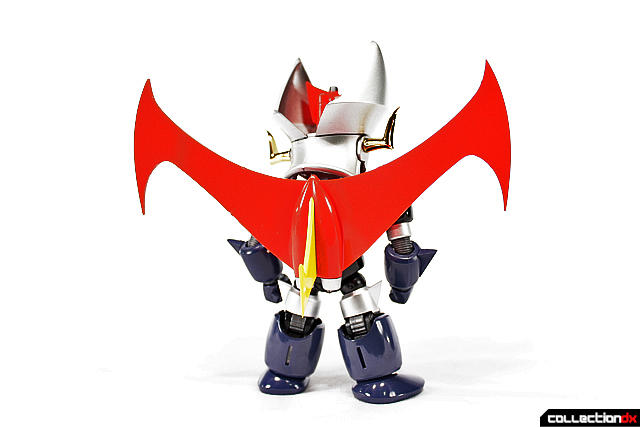 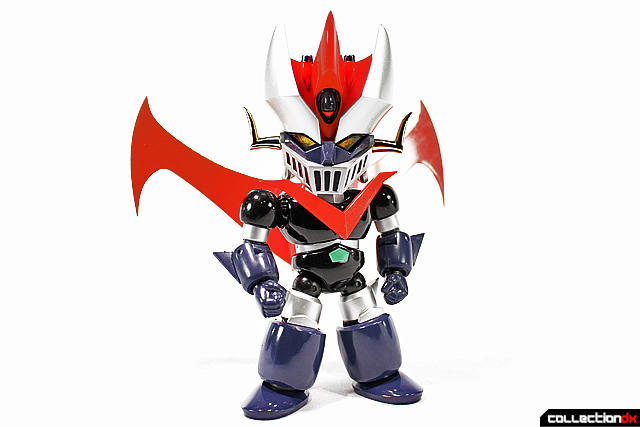 The figure has many points of articulation you may not even expect from something with these proportions. I don't know what kind of pose I was trying to capture here but it was to show off it's articulation somehow. 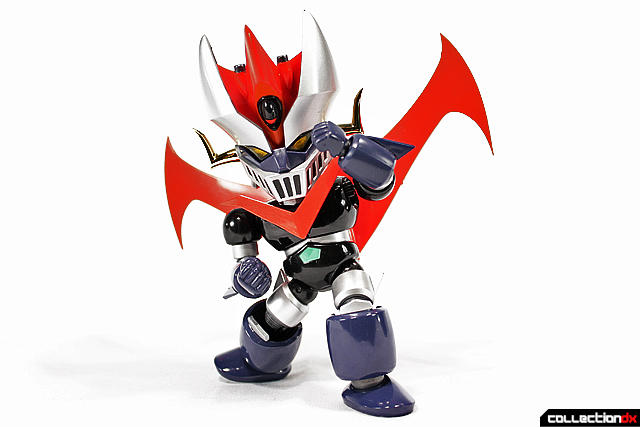 Normally, a figure with these proportions should have really limited articulation, but Fewture did the right thing by providing extensions to certain areas that would require extra movement to achieve those must have poses. Here you can see the shoulder extension. 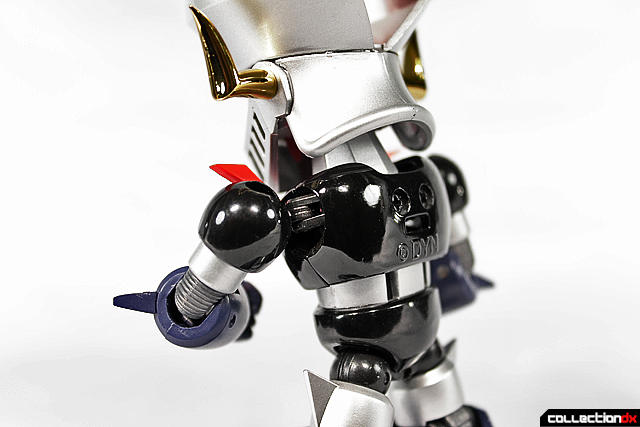 Here you see the ankle extension. 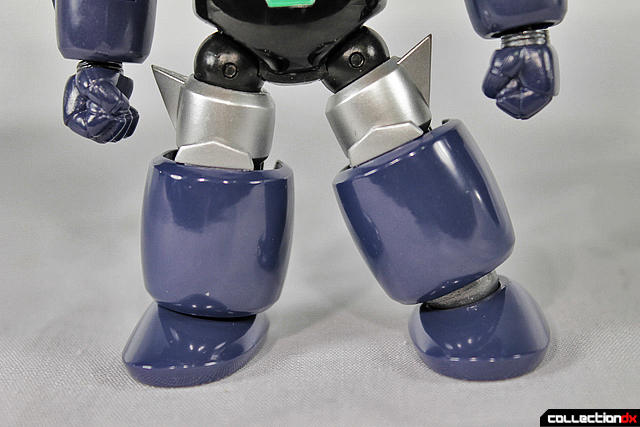 The ever popular extending crotch. 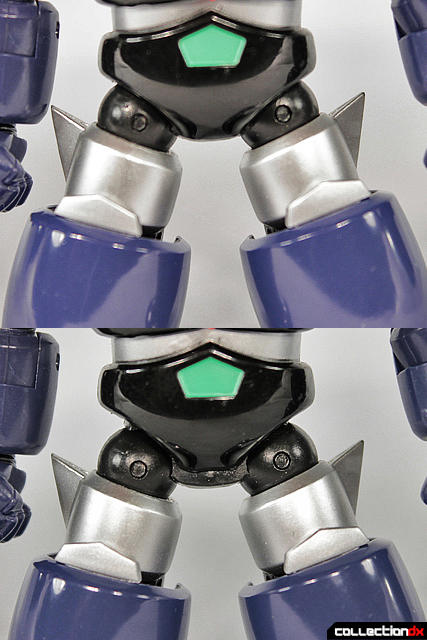 Let's check out some weapons. We'll start with the Knee Impulse Kick which consists of removing the standard knee pads and replacing them with spiked ones. 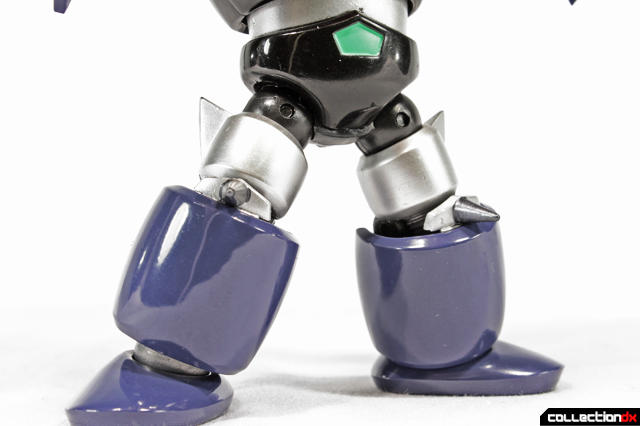 This is called the Backspin Kick which is a blade attachment that also requires removal of the knee pad and clips to the lower part of the leg. 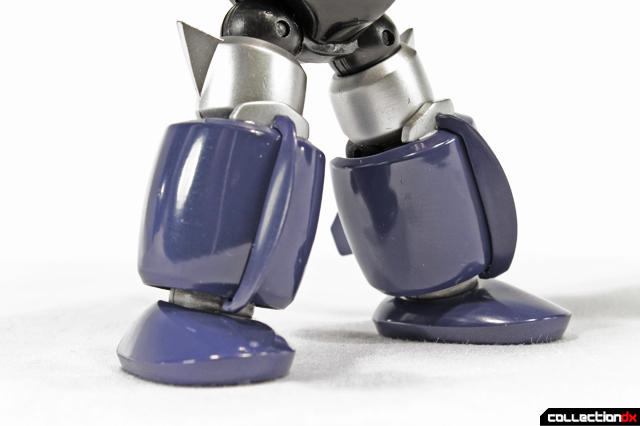 There is also fins that attach to the back of the leg. 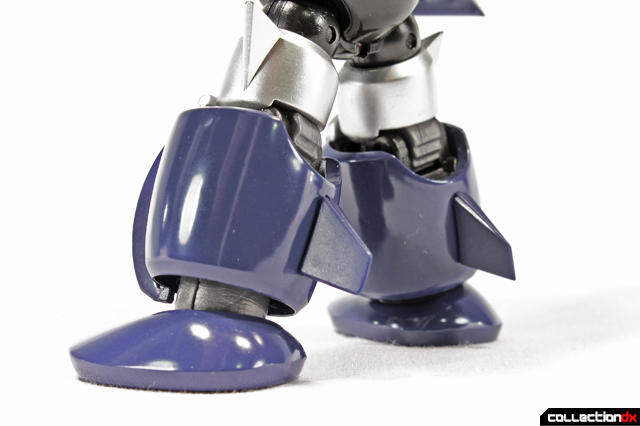 Great Mazinger's heat sink can be removed from his chest to use as the Great Boomerang. Clever name. The heat sink on mine had a tendency to fall off the chest during frequent handling. 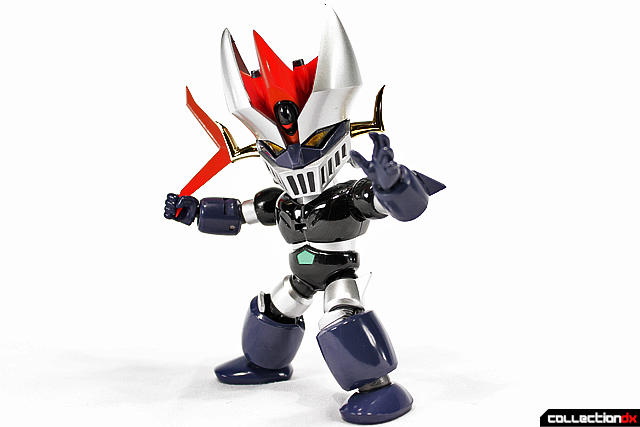 He comes with a pair of Mazinger Blades which have an excellent chrome finish. 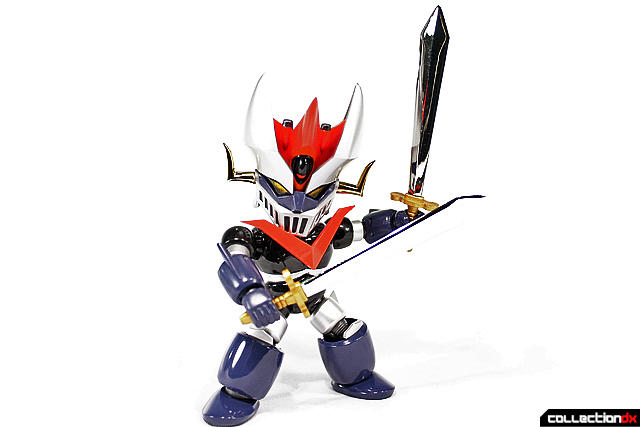 You would never expect a figure of this size to include a firing feature but it does! This gimmick is to recreate the Drill Pressure Punch. 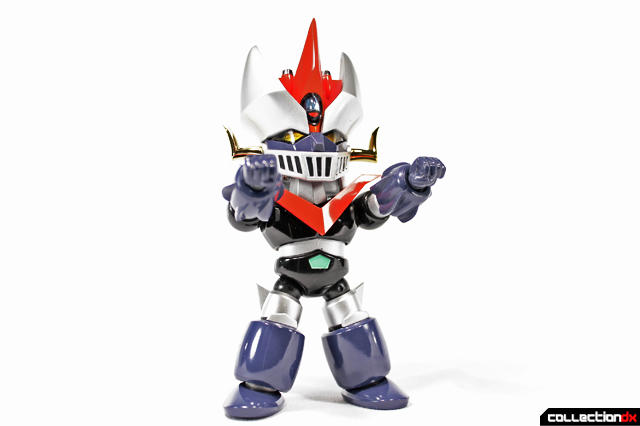 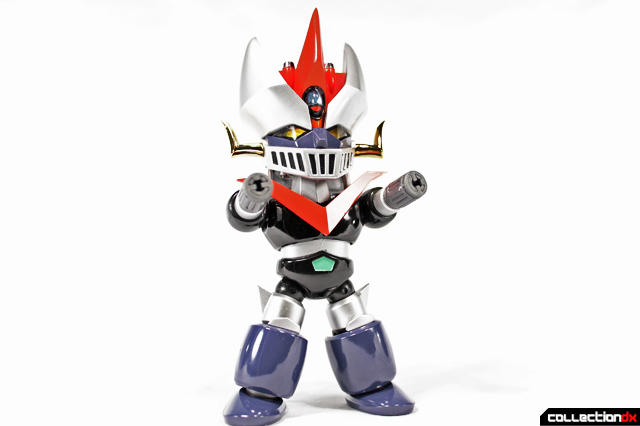 Also included in this fine set is the Great Booster. It attaches in the same way the Scramble Dash does. 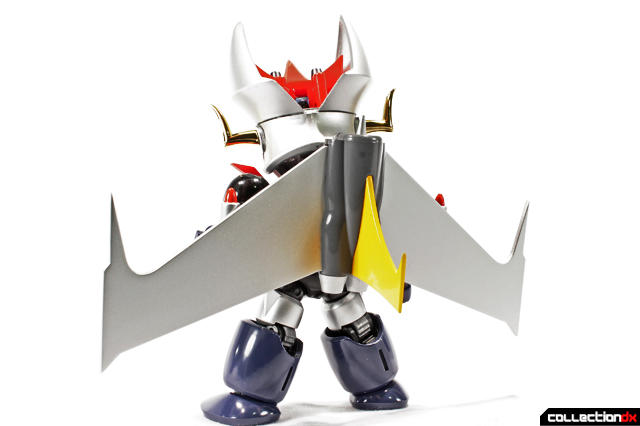 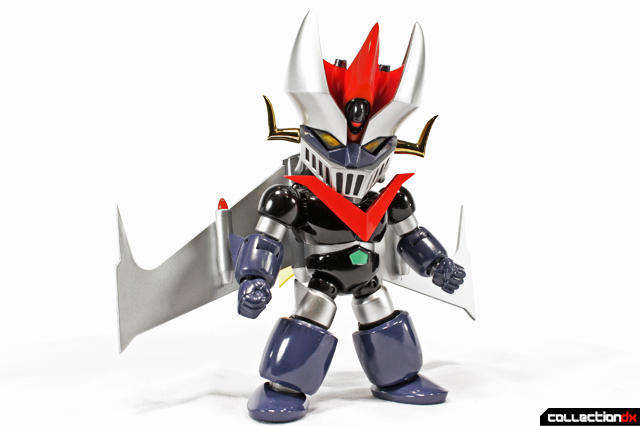 The spike can also be extended out. 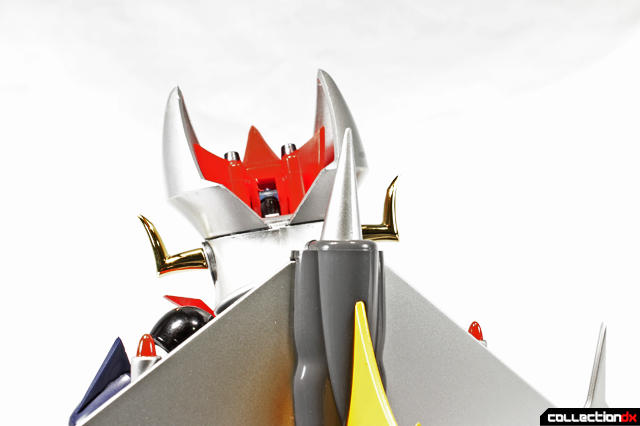 If you wish to use the included stand to get a flight pose out of it, you can attach an included stand piece underneath the Scramble Dash/Great Booster. 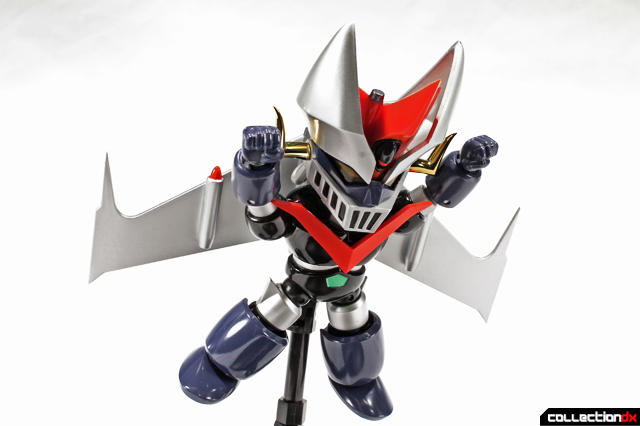 Great Mazinger is a really nice addition to any collection if you tolerate SD figures. Not everyone does. Looks even better next to ES Gokin Mazinger Z. 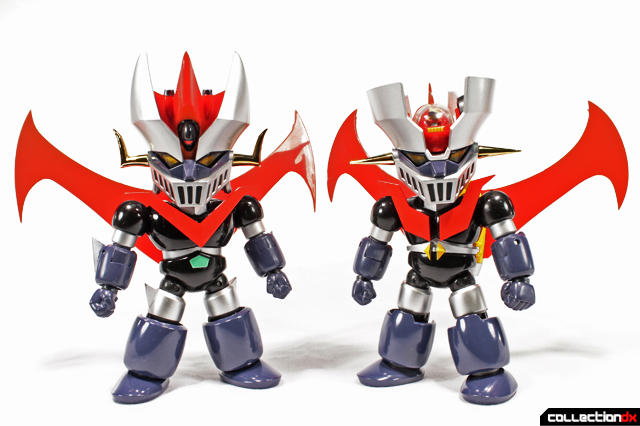 I was never a big fan of SD figures until the ES Gokin line came around and I really can't get enough of them when it comes to Super Robots. While overall the quality is good, I am once again riddled with QC issues on a Fewture product. Mine had paint touch ups/defects on the stomach and one tip of the Scramble Dash was broken, the other alread stressed and ready to break any second- straight out of the box. I may just have bad luck with Fewture products. Overall, the figure looks great, the price is right and it's a fun little Gokin. 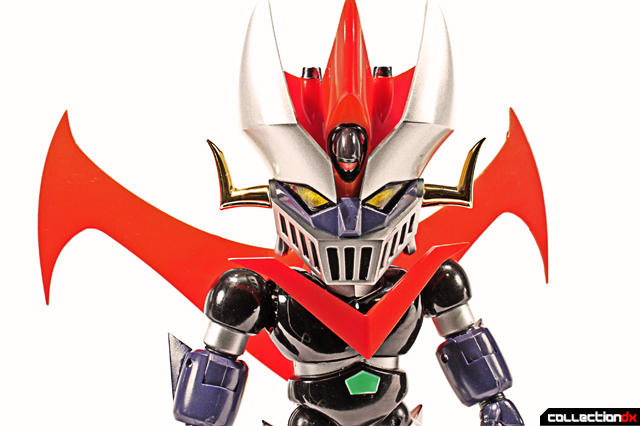 1 comment posted
I can take or leave SD, but

I can take or leave SD, but this guy looks really good. And the engineering is impressive.

Too bad it's original price is long gone. Looks like secondary markets for twice as much are the only options. Otherwise, I'd be all over it.