In my many years of collecting robot toys I have accumulated numerous off-brand Transformers that are not bootlegs but original designs meant to ape the popular brand. Thanks to the efforts of the B class transformer king, Butto, I was able to discover the Japanese origin of some robot toys that were bought in an American drugstore years and years ago. I present to you the strangely named Galaxy Man line which in America was released under the banner of Formulator Force. In Japan these were produced by a company called Nakai who seem to have done nothing else. However, the style of the Japanese packaging looks similar to that used by the main manufacturer of off-brand robots, Wing, so maybe there is a connection there. Being rather crude look toys, these guys aren't so much a case of "I had that!" but a more disparaging "Oh those guys." 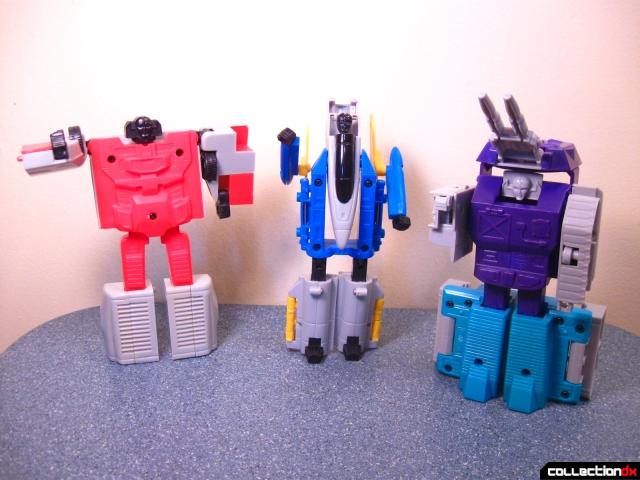 This trio of mighty mutating machines lack the uniform colors of the original Galaxy Man release and instead go for something more authentic. Or as I should say, more authentic in toy terms. All three figures stand a little under seven inches tall and are made of slightly rickety plastic. 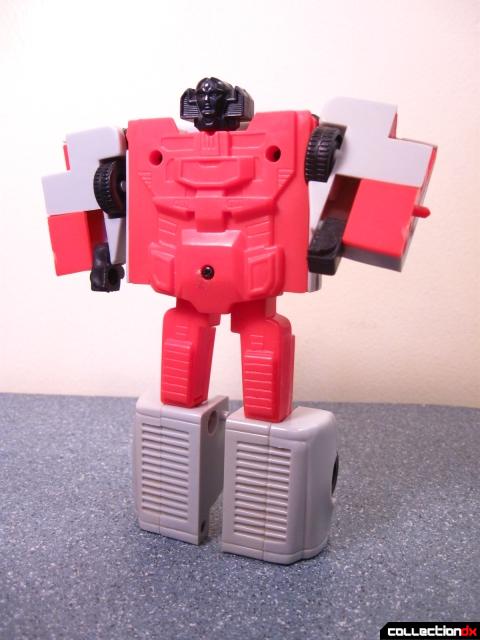 The imaginatively named Super Car fills out the requisite car guy role in the team. Mine has a slightly loose knee joint so he needs to keep one arm out to stand upright. While his overall design is slightly less polished than a typical G1 Transformer, Super Car does have a strange connection to one of the classic Autobot cars. 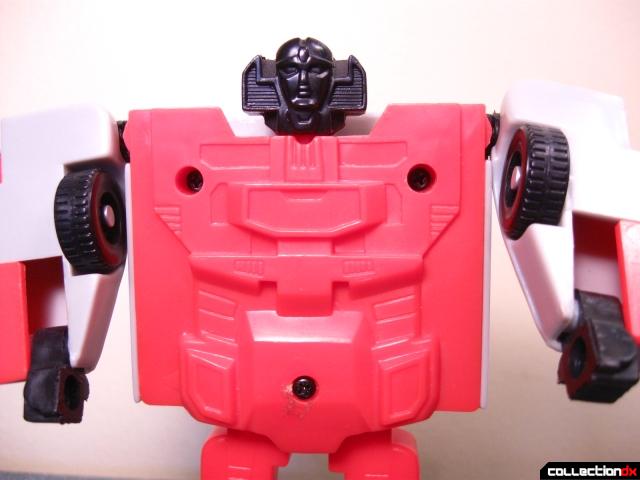 For whatever reason, all three members of the F-Force have the head of G1 Sunstreaker. While it isn't a perfect one-to-one copy, the resemblance is uncanny. The rest of Super Car's robot mode details come from a some generic but strangely familiar spread of a Transformer body. The overall effect is somewhat hampered by the bare patches on either side of his "waist" that betray the simple way the torso is formed out of the car mode. It's like the Transformer equivalent of a tuxedo t-shirt. 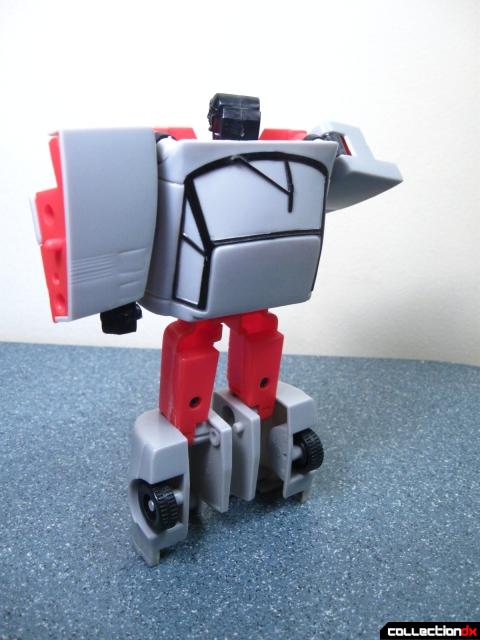 From the rear, Super Car's transformation methodology is readily apparent. He's kind of like the less accomplished cousin of intergalactic super spy Punch/Counterpunch. 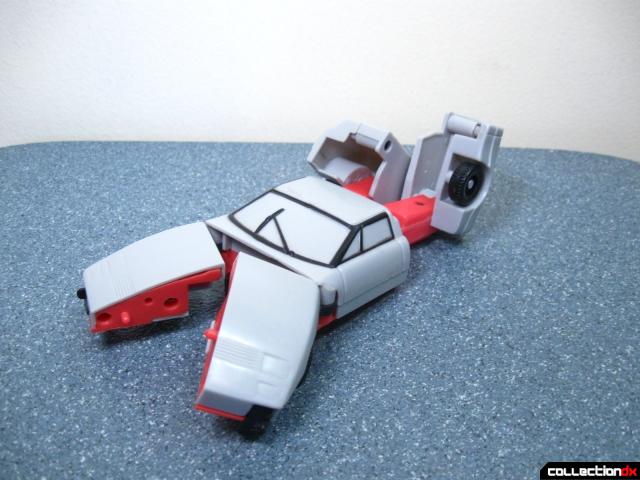 Just re-position a bunch of car parts barely disguised as limbs to convert Super Car into an adequate automobile. When I originally got this toy his hands were installed backwards which prevented them from flipping in all the way. Some quick work with a screwdriver sorted that mess out. 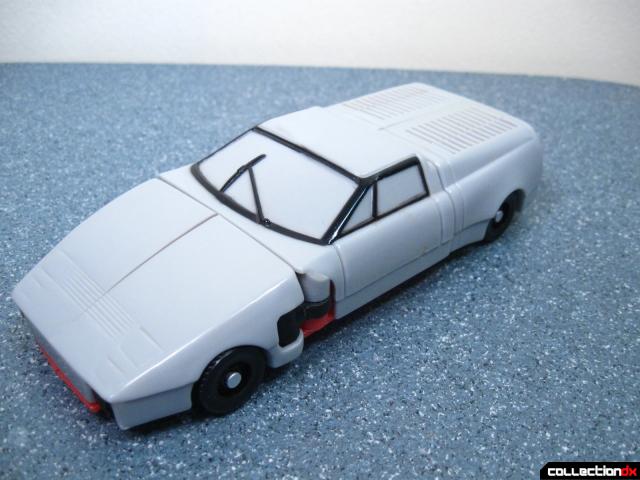 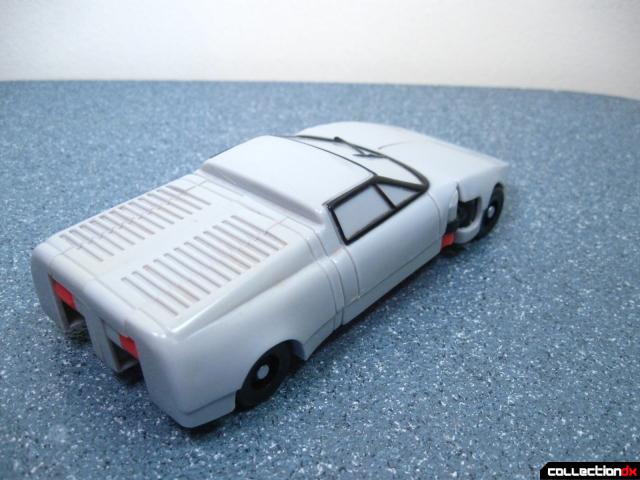 Super Car's vehicle mode is an 80's sports car. Judging by the front and the single windshield wiper permanently frozen in mid wipe I think this is meant to be a crude facsimile of a Ferrari BB. Color wise, the Formulator Force version of Super Car is the closest to his Galaxy Man forebear. In some ways it works better because now he has black tires instead of gold ones. In this mode Super Car can roll along reasonably well and stays together alright given his bargain bin construction. 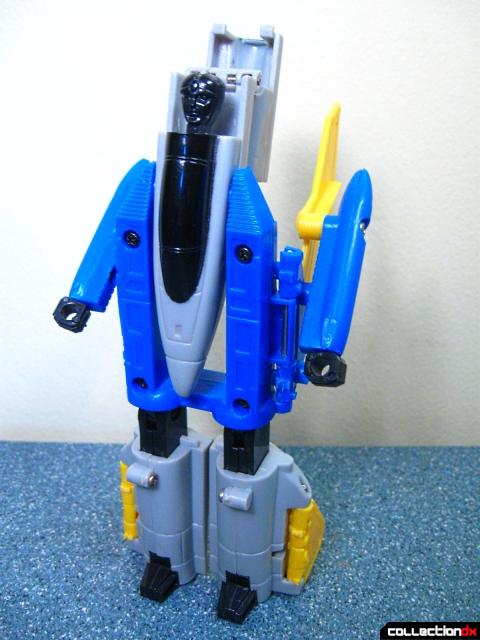 The next member of the team is a transforming jet named Super Jet. He is easily the most rickety of the three figures with tiny fists that can spin loosely around at the wrist and a torso that has no way of locking in the upright position. The large gaps in his torso and the weird detached arms seem to echo a more abstract Machine Robo style of design than a Transformer. 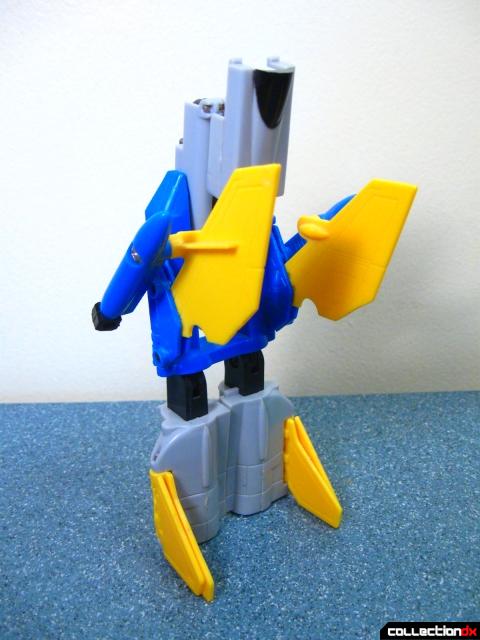 Like many transforming jets, Super Jet isn't really sure what to do with all of his wings and tailfins so he sweeps them back in an effort look more humanoid from the front. The tailfins pull double duty as heel struts. 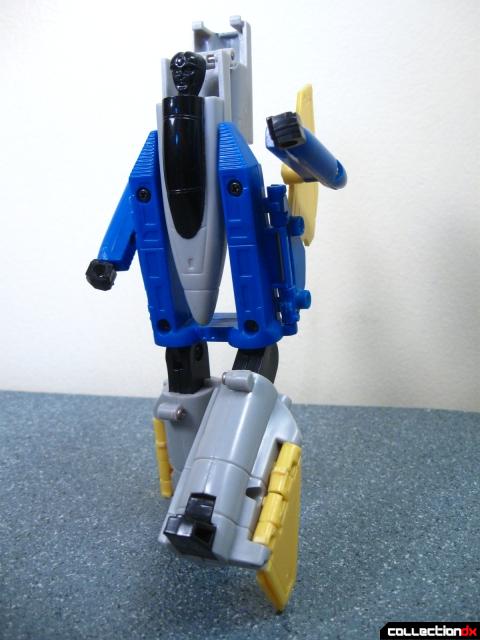 Thanks to a few basic joints, Super Jet can battle the forces of evil with a jaunty stroll. 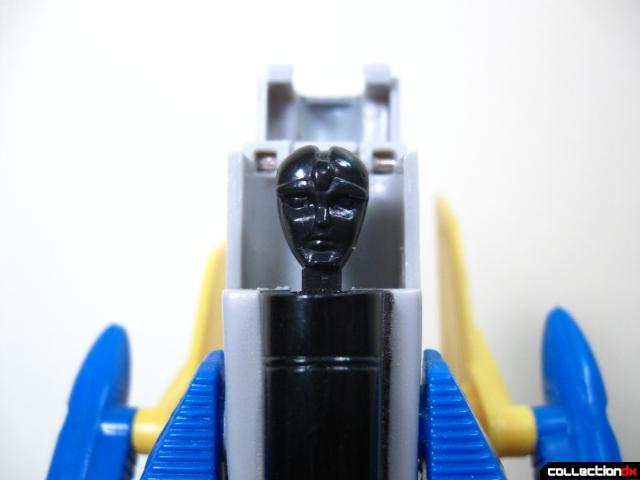 Super Jet also has his own version of the bizarre Sunstreaker head, which is missing the characteristic "ears" making this toy just a little more creepy. And for whatever reason the head can move... 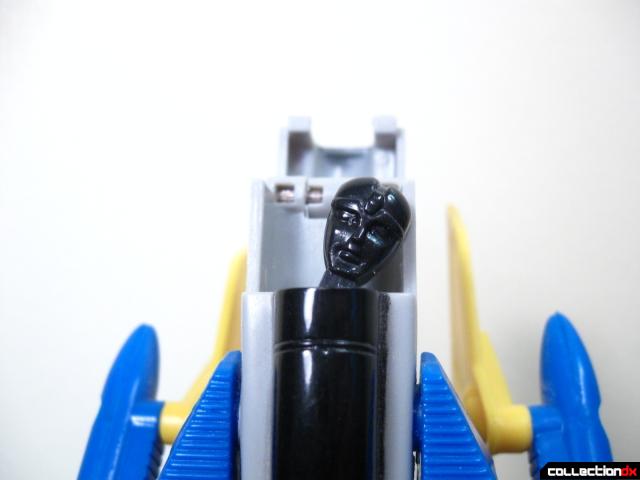 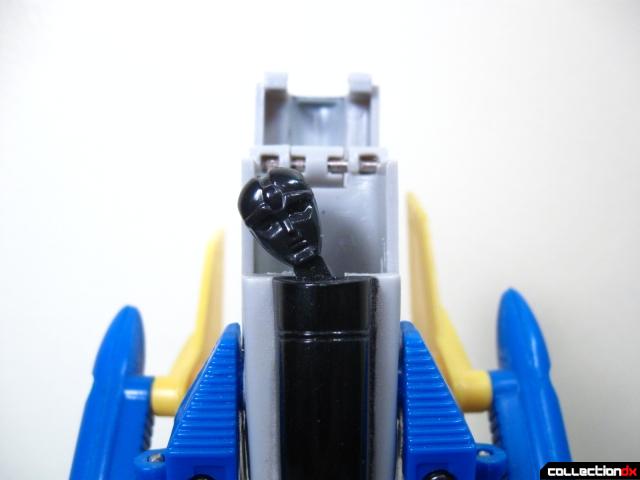 It's just so weird! 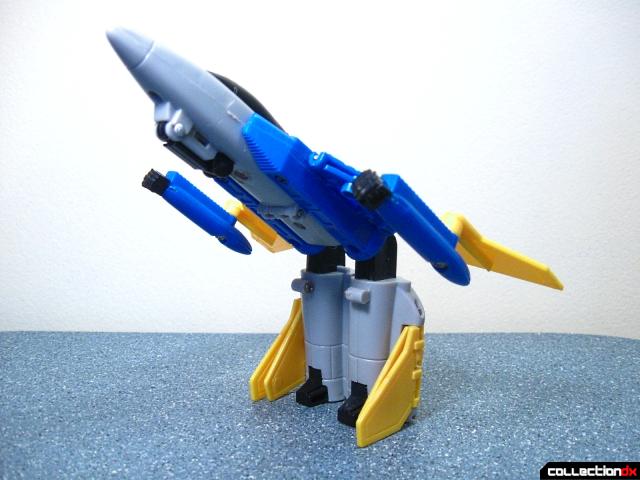 Transforming Super Jet into an airplane is a pretty simple affair. However, he is designed smartly enough to allow for an alternate transformation on the way to jet mode. 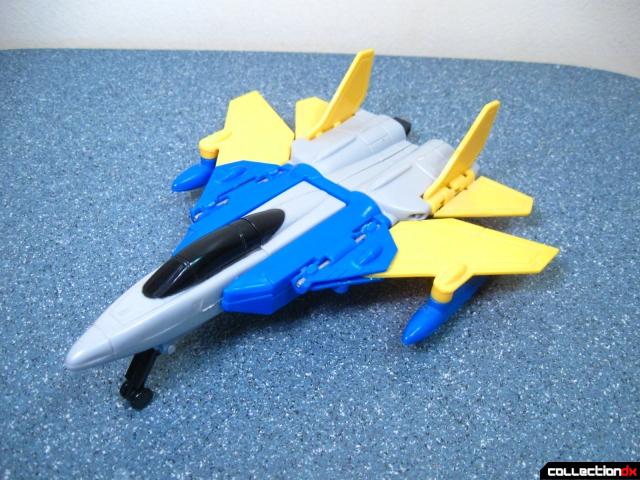 Super Jet transformers into what I looks like a MiG-29, which is a jet that I think is quite super. The gray, blue, and yellow colors work fairly well together as it gives Super Jet a crude stunt plane look. 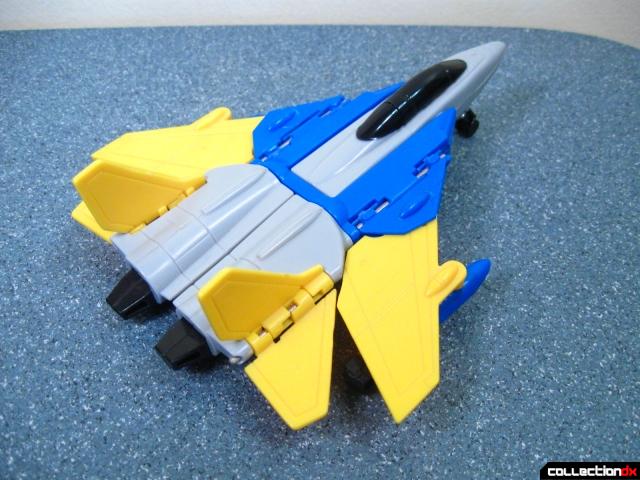 One of Super Jet's peculiarities in this mode is a nose wheel that far too tall for the plane mode to sit level on the ground. 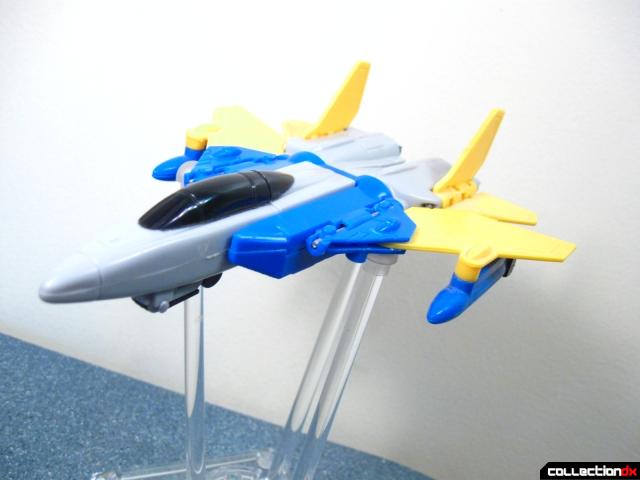 Despite the figure's bargain bin design, the jet mode is still fairly sleek. While the drop tanks make terrible arms, they do make good underwing stores and do a lot of give the jet mode some legitimacy. 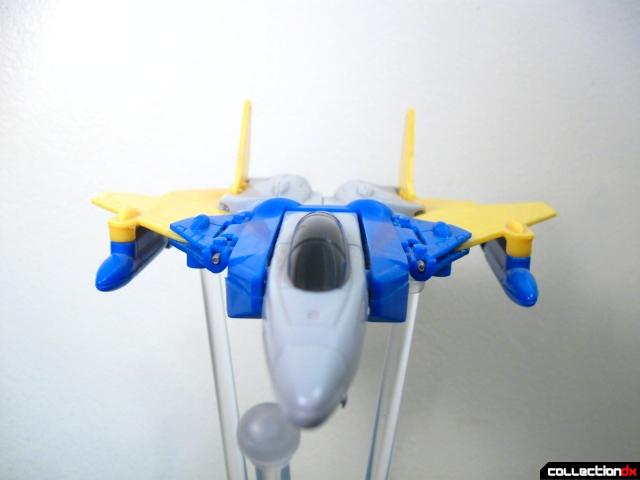 You could easily see this guy giving Leader-1 a run for his money. 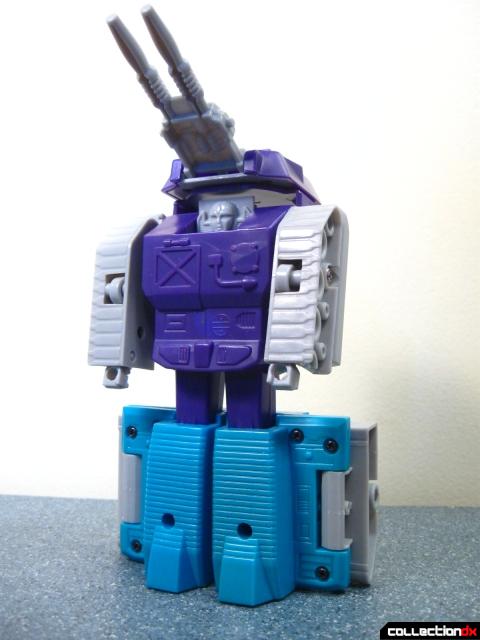 The last member of the Formulator Force is a beefy tank dude named Super Tank. Unlike the other two, Super Tank is quite a handsome bruiser who proudly advertises his vehicle mode with tread-bearing limbs and a big double-barreled turret above his head. 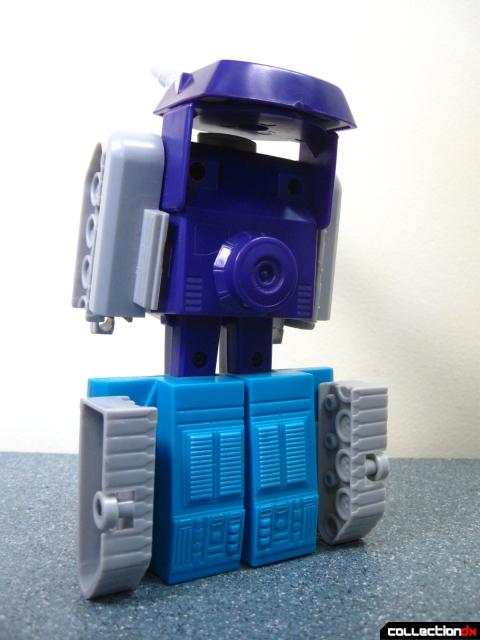 Super Tank looks quite excellent all around with tons of detail on both his front and back. I especially like the false rotation point in the middle of Super Tank's back that looks like it connects to the main turret but instead just rests underneath. 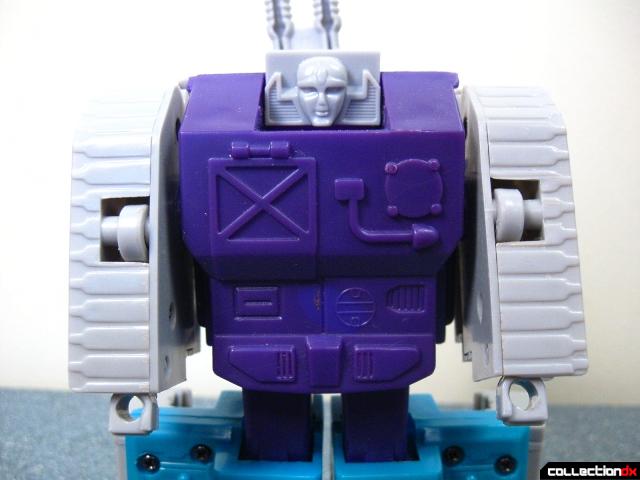 Again Super Tank has the odd Sunstreaker face that is embossed on a flat panel that flips down for tank mode. His chest has some nice tank-y detailing and if you look close you can see the remnants of the "made in China" sticker that was affixed over his bellybutton. 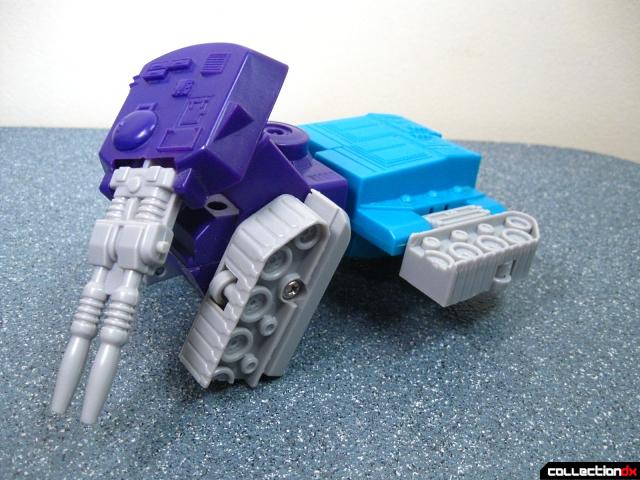 With some satisfying clicks and clacks, Super Tank compresses down into a powerful panzer. 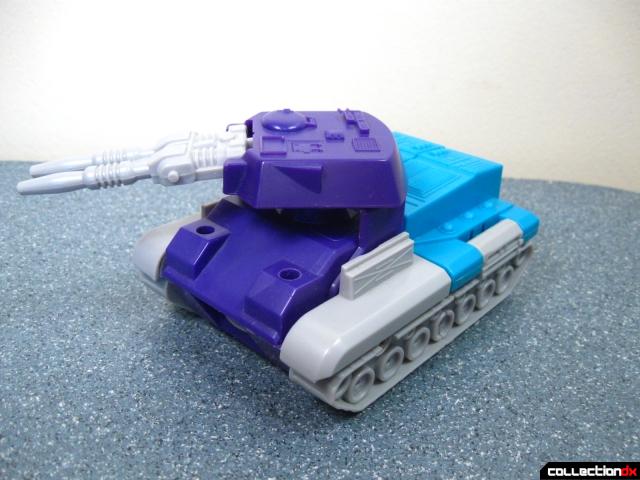 While this tank mode is pure fantasy, the spread of mechanical detailing all over it gives it the look of a functional future tank. The turret moves, the guns elevate, and the whole thing can sorta roll on four plastic wheels so it passes the toy tank test with flying colors. 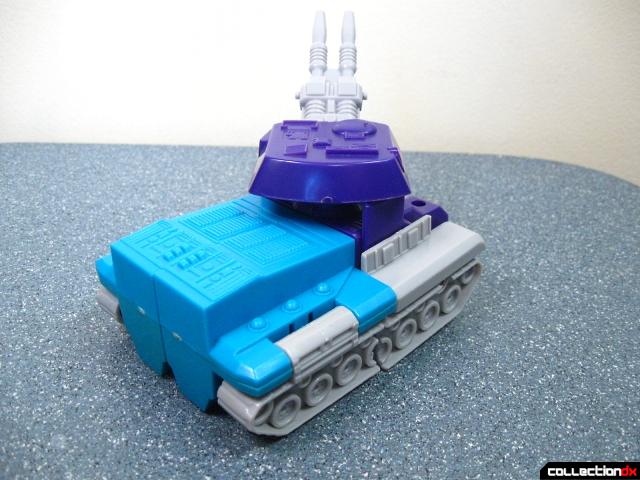 Speaking of colors, the odd gray, purple, and turquoise combo manages to work well with this big block of tank. Again a lot of this is helped by all the surface details like the vents in the rear of the tank that denote the presence of an engine. There's even an egress hatch on the turret. 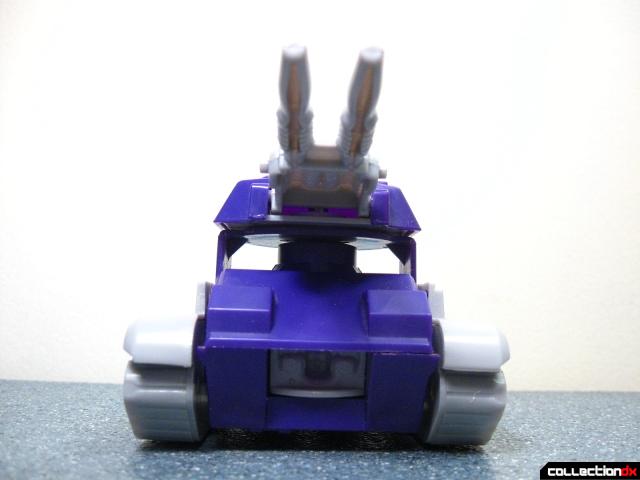 The way the turret "floats" above the main body is a rather science fiction inspired touch. If you look on the front you can see the rear of the head panel and how it almost looks like it was vacuum formed to create the face. Like a Sunstreaker death mask. 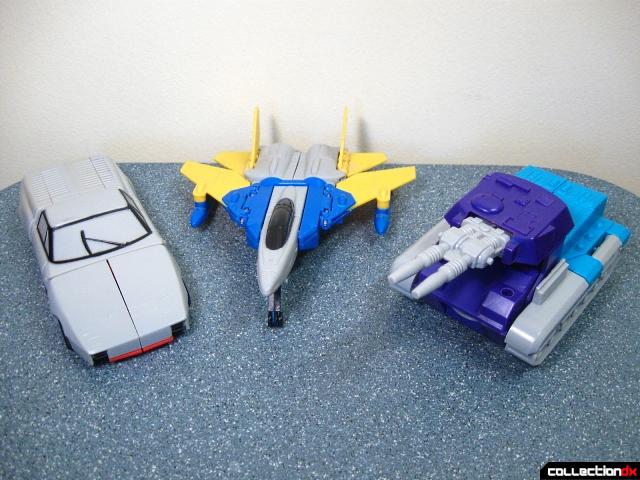 And so we have another set of drugstore transformers that actually have roots as Japanese robot toys. I personally have only encountered these figures under the Formulator Force banner but from what I have seen online they were released in a variety of colors in other toy lines besides Galaxy Man. These are definitely a fun curiosity for collectors of strange robot toys.

3 comments posted
I had that!

Well, one of them. I remember growing up with about half a dozen cheap transforming robots, while I've been able to deduce the identity of most of them over the years Super Car had eluded me.

The one I had was identical to this, I loved it and even created a makeshift plane mode for it, it was all fun until his head fell off, and superglue only lasted so long.

I bet I still have the headless bot stashed somewhere.