Next up in my journey through the catalog of the obscure toy company WING is this construction robot named “Construction King”. In Japanese, it’s 工事合体ケンセツガー which translates to “Construction union Kensetsuga”. The robot itself is the DX Kensetsuga

There’s no date of manufacture on this guy, but he looks fairly recent. WING has been active since the 90s and it’s unknown if they are still in operation. This toy has been around for a few years and it’s even included in the “Super B Class Transform Robot War Dagangu” book which was released in 2011, so it’s at least that old. One Japanese site put it at 1991, but I think it’s newer than that.

The box looks modern with colorful graphics and die-cut windows. 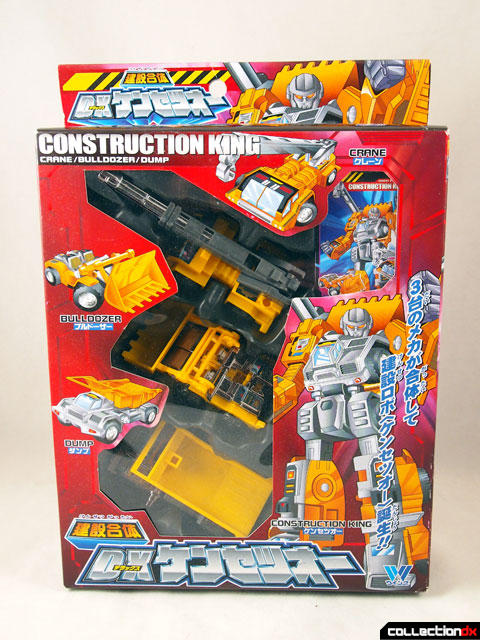 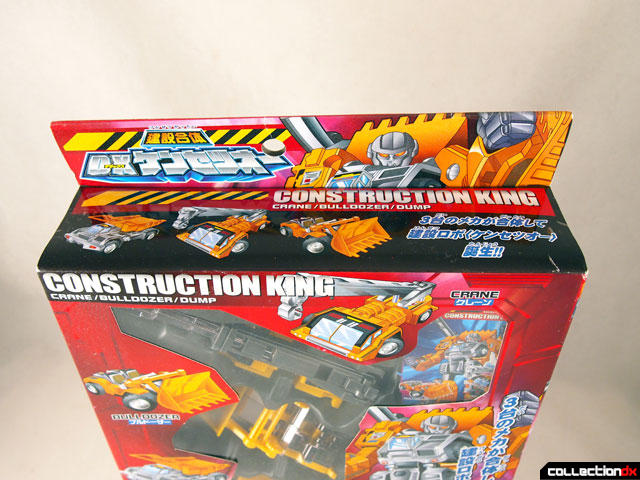 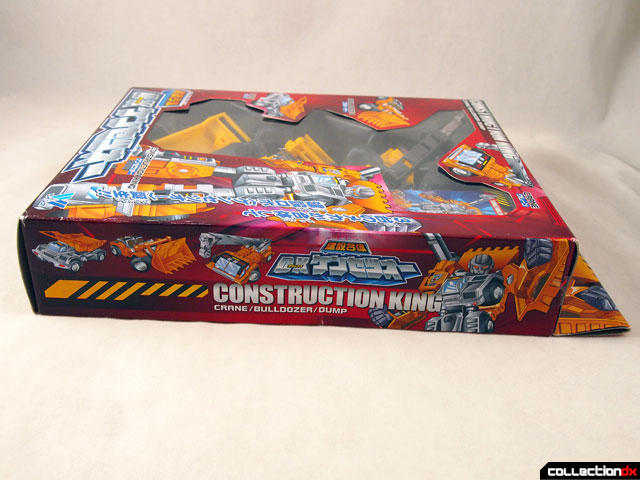 The back features the only instructions you are going to get. 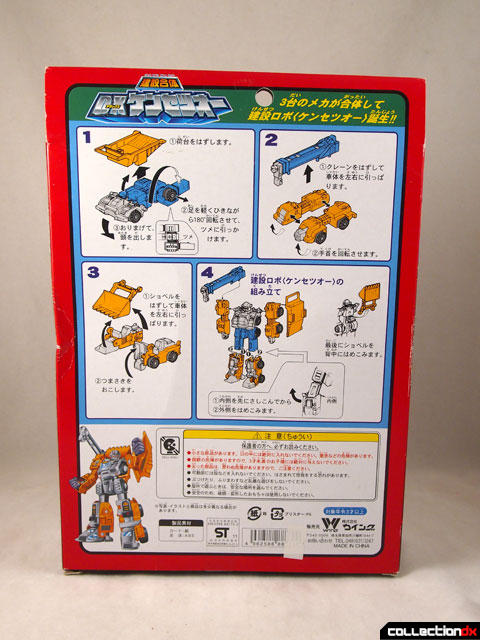 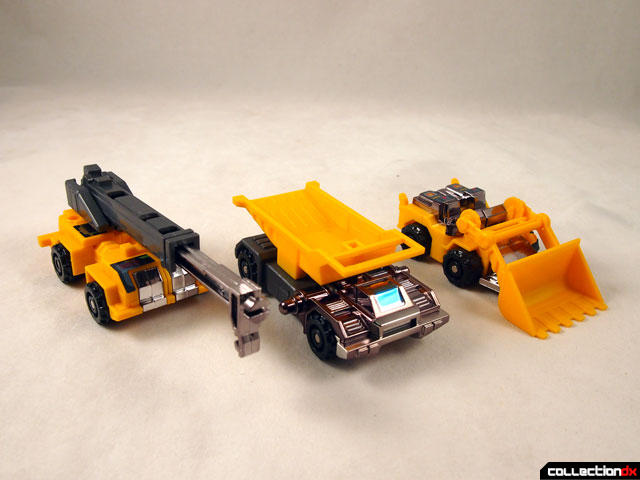 Each toy is very sharply molded with high quality plastic.

The dump truck takes the place of one of those large, industrial dump trucks used in open pit mines. 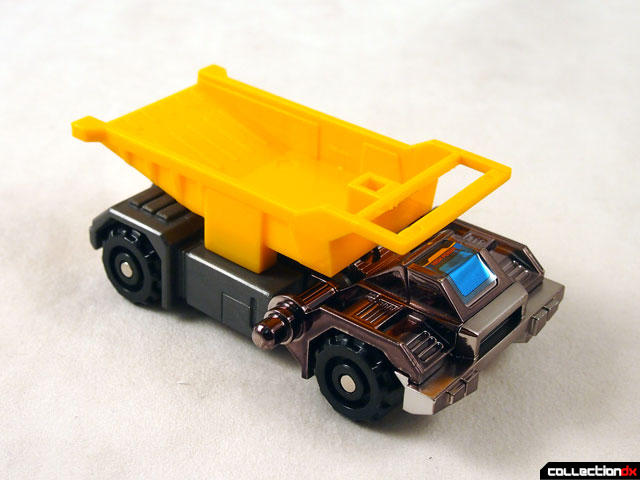 The dump bucket does not dump. 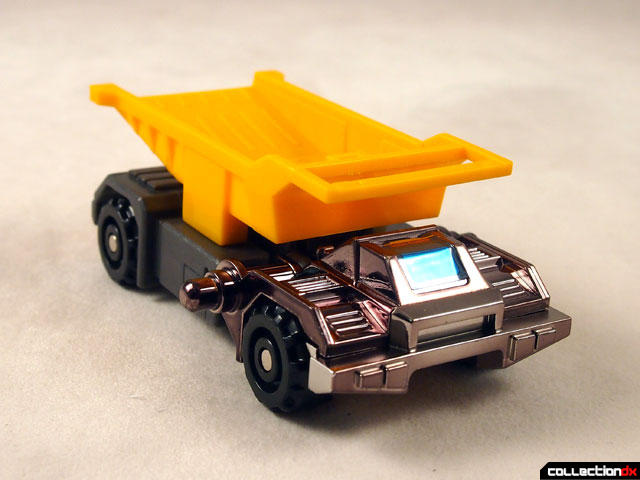 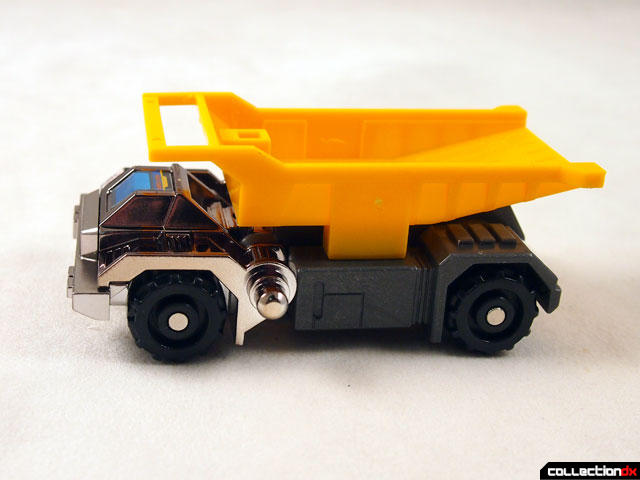 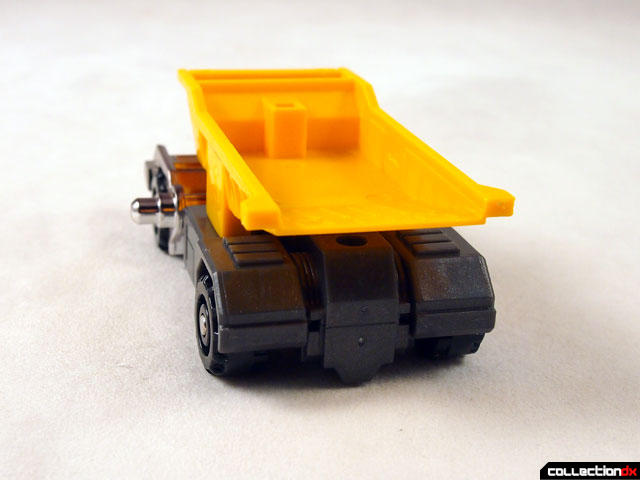 The Crane vehicle is nice in that the crane actually works. The boom rotates, extends and raises up and down. 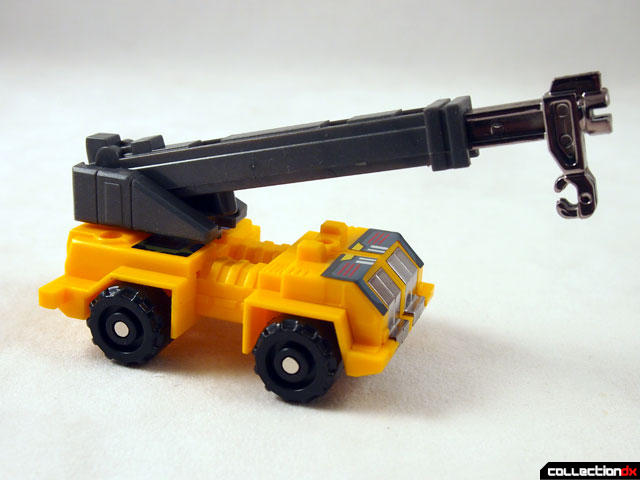 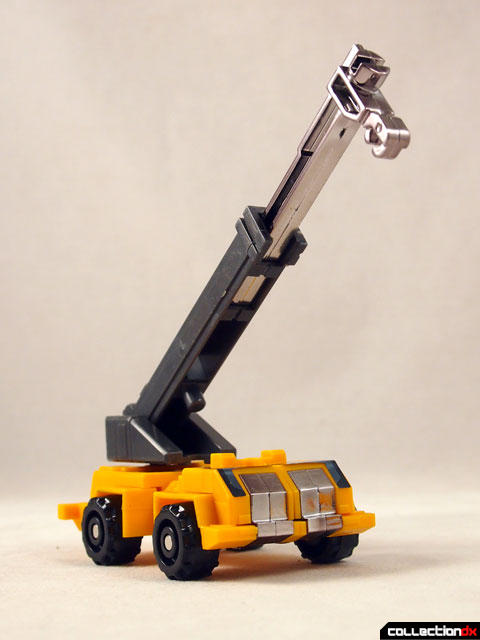 The bulldozer is an unassuming little vehicle with a working front bucket. 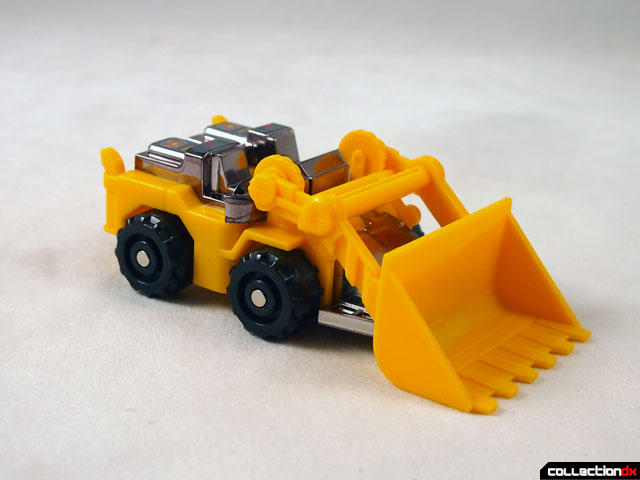 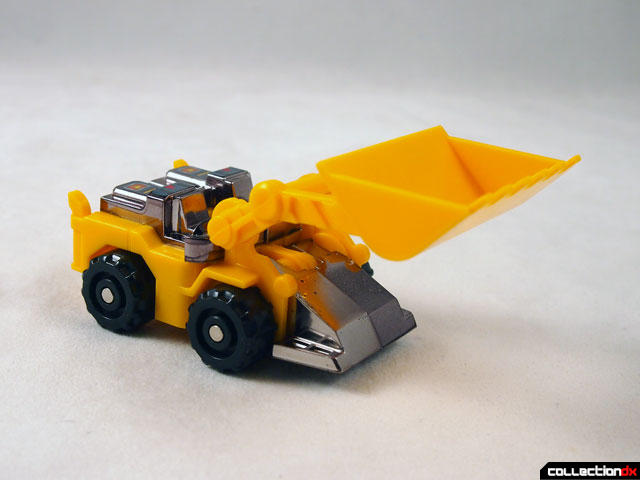 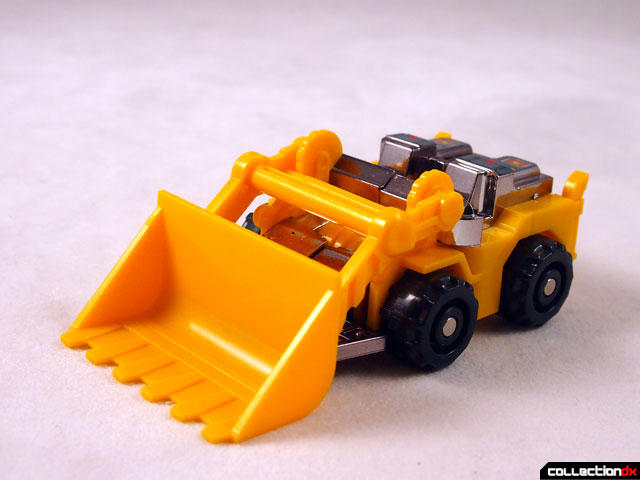 There’s no denying that this is a parts-former as well as a combiner. However the fit and finish is so nice I don’t even mind. Transformation is simple.

Remove the front bucket from the bulldozer, split the vehicle in half. Flip up the feet. 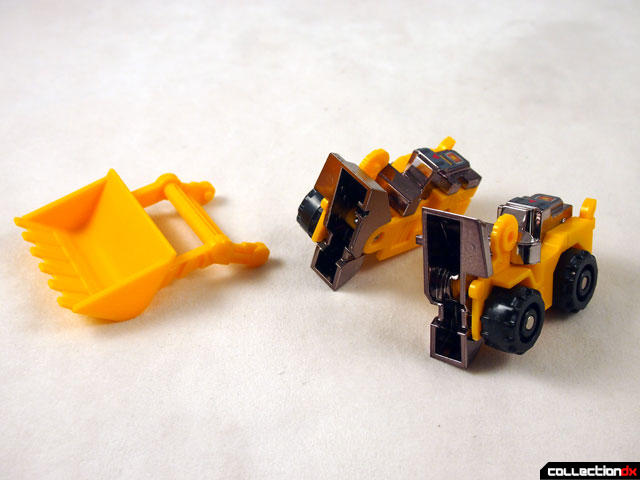 Remove the boom from the crane, split that vehicle in half, unfold the arms. 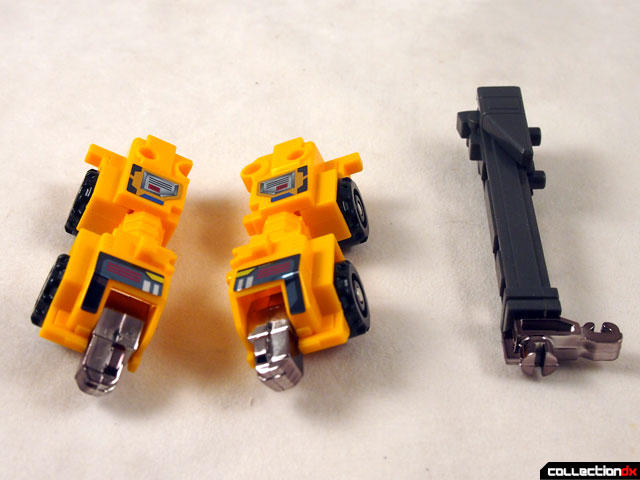 Remove the bucket from the dump truck, and fold down the front of the vehicle. 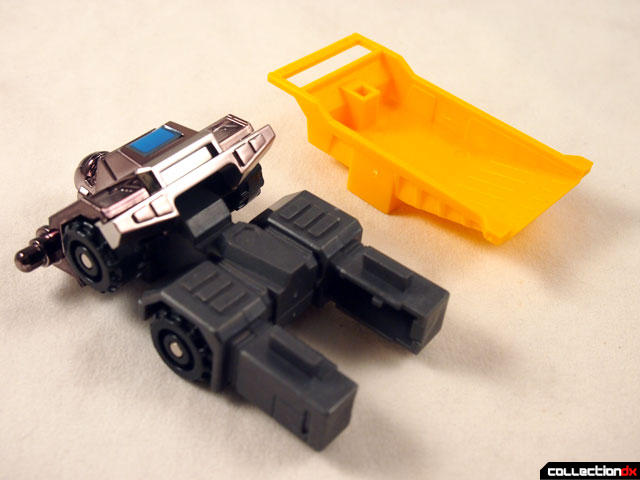 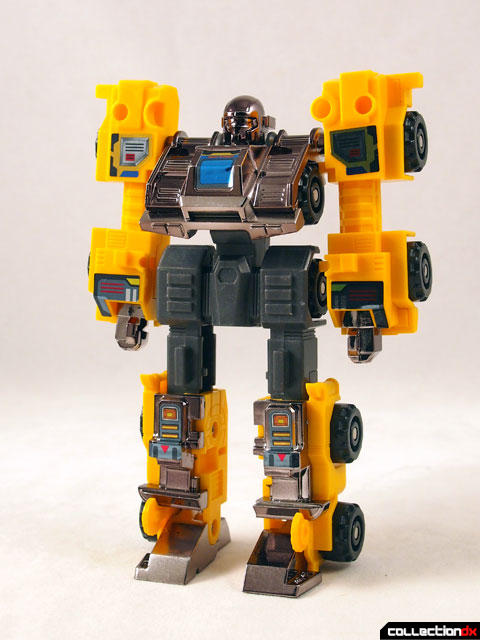 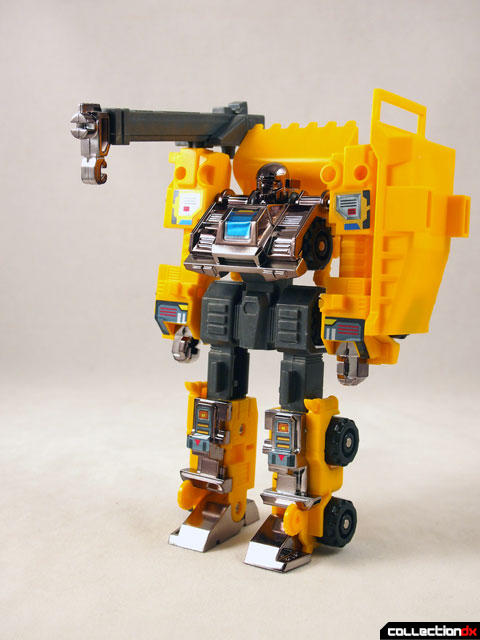 The robot mode is fantastic. I love the dark chrome detailing. Despite being only about 4 inches tall this thing has presence. 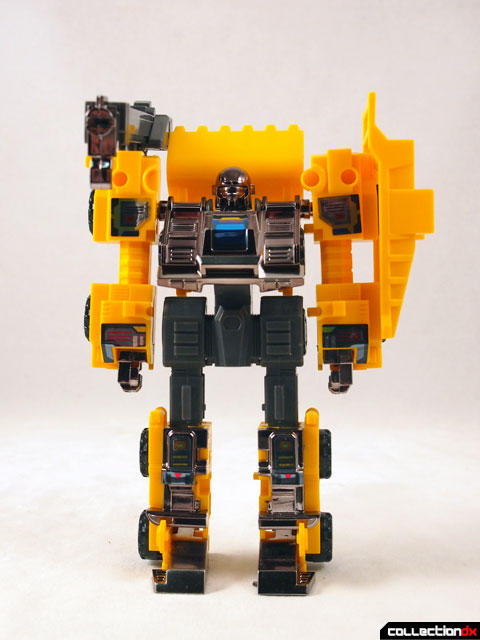 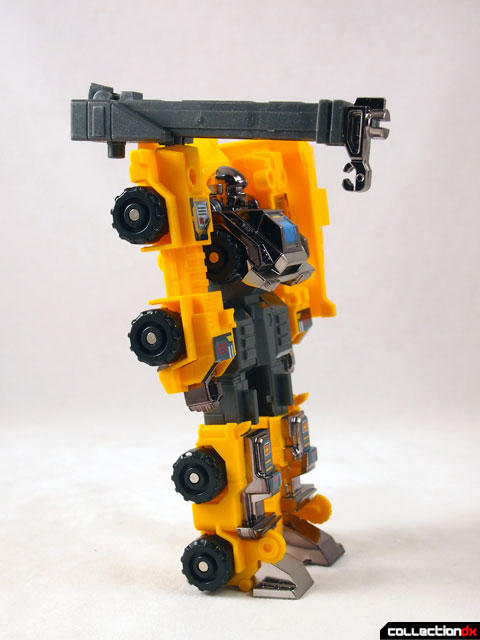 Articulation is limited to the arms, hips and the crane boom. 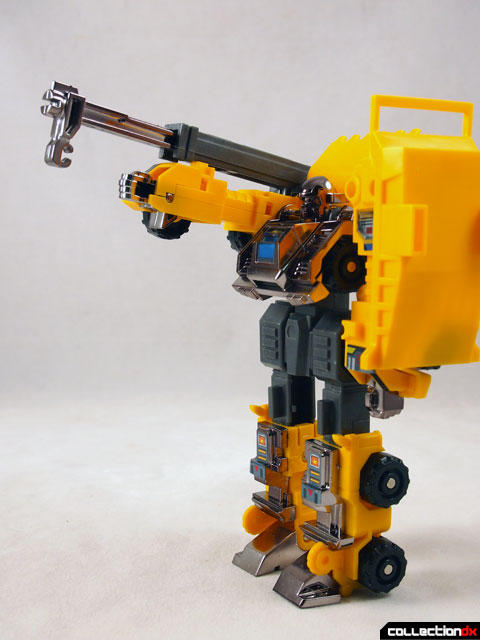 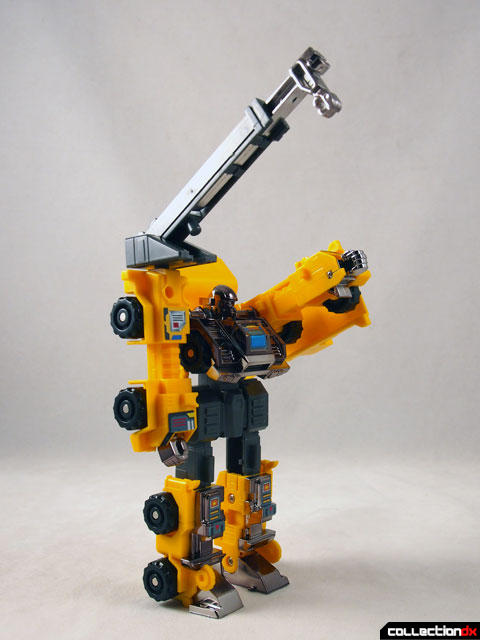 This thing has a fantastic, fully realized aesthetic that is not often seen in a cheap toy maker. Despite being a small company, WING designed toys like they were one of the big guys. 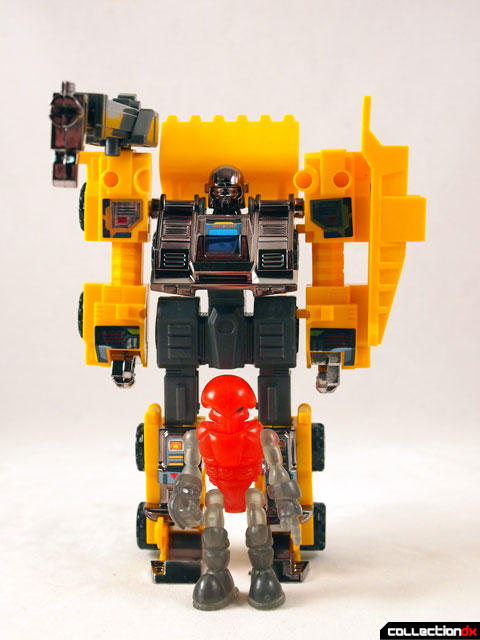 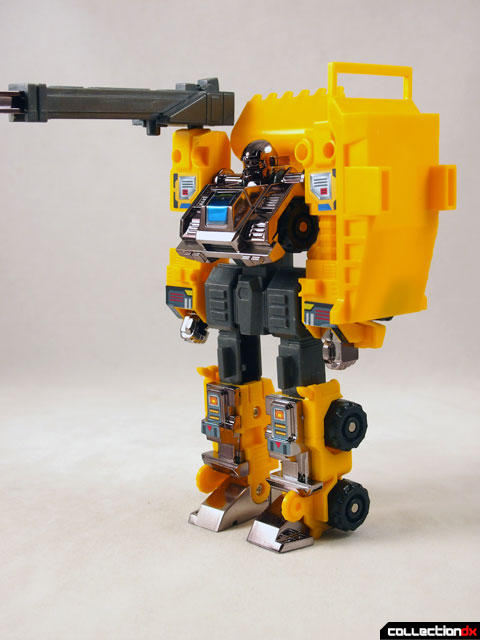 This toy was released in several different color schemes over the years. It was packaged as a set, and also with other toys in a sort of “travel” set. Variations can be seen here.

4 comments posted
Very cool! Why do

Very cool! Why do transforming construction machinery fascinates me

Your variations link at the article's end is not working.

And dammit, that robot is cool! I love transforming robot toys that have no back story. Their adventures are a clean slate to the imagination and are not held down by Optimus this and Gundam that.

Butto's site is basically a repository for all these robot toys: http://www22.pos.to/~butto/

The main menu links to pics of robot toys made by the Japanese toy makers named WING, HERO and JAM. The Other in the sub-menu shows others. However Butto hasn't updated his/her site since 2006, so the site hasn't added anything new since then.

Josh B - According to the Change Log on Butto's site they last updated that 'Kensetsuga' page on July 26th 1999. So I believe this toy is, at least, from the mid-nineties or even 1991.

Would you be willing to post scans of that transforming toys book, especially if there are things in there that aren't on the Butto site?