If it's called DC Superheroes, and the first series is Bat-centric, it's a safe bet a Batman figure will appear. This is the first of many in this line. 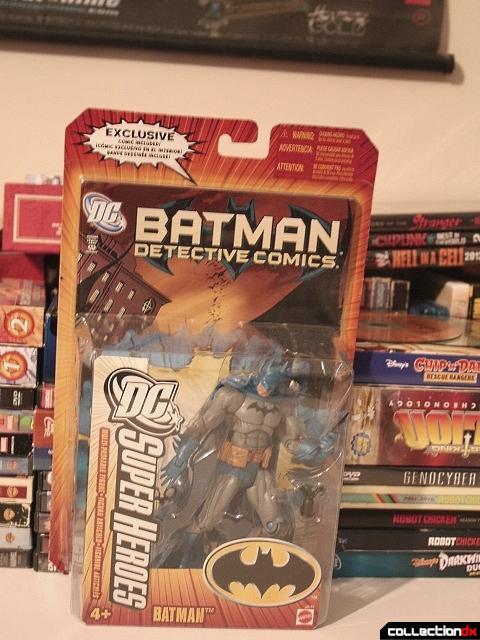 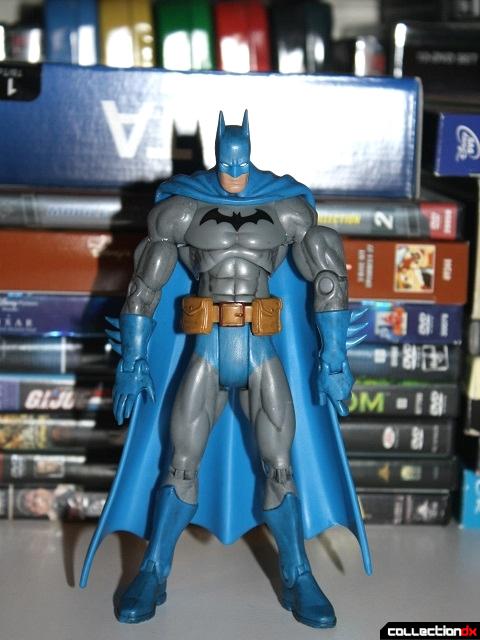 Batman is one of my three favorite superheroes, up there with Spider-Man and Iron Man. So it's a great feeling to know that he's been getting modern action figures, even if it it didn't happen till six years after Marvel Legends took off. And he's had many different looks and designs over the years. Some are drastic departures and others are minor changes. In this instance, grey and blue with an oval-less symbol was the look coming out of the mid 90's. 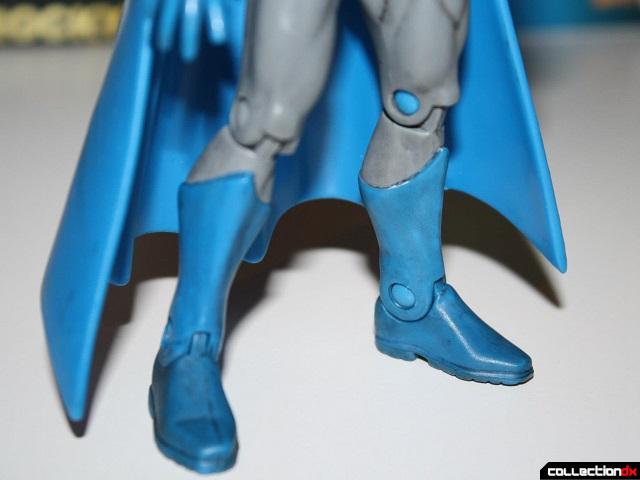 Right off the bat (*rim-shot*), the one thing wrong with this figure visually is that blue pin in his left knee. I imagine something like that could only happen with an assembly line where QC isn't mandatory for every single piece assembled. Which is reasonable for something that retailed for $10. 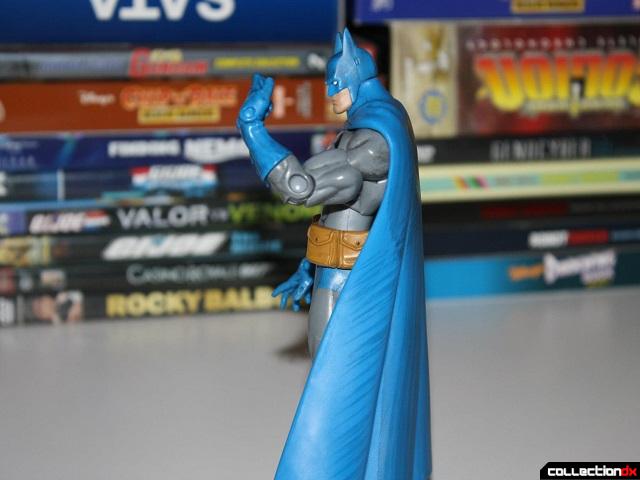 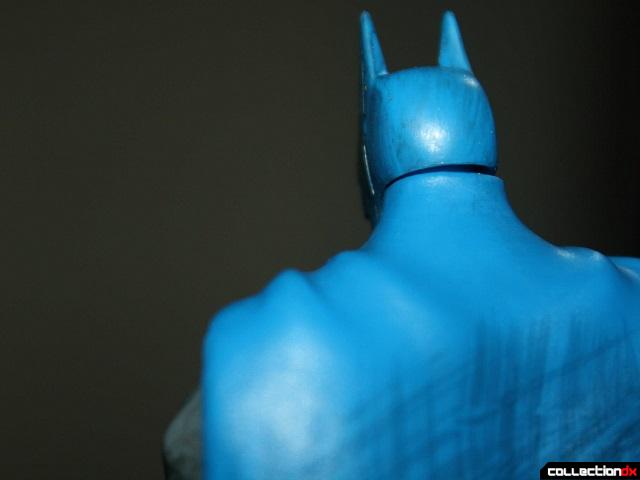 Menacing, dirty, and gritty are all things that can be used to describe Batman. This is definitely him, and even though the blue and grey always makes me think of Neal Adams, the literal dirtiness of this costume roots him in more modern times. I find the cape especially interesting because of the shaded pattern on it, like completed comic art. 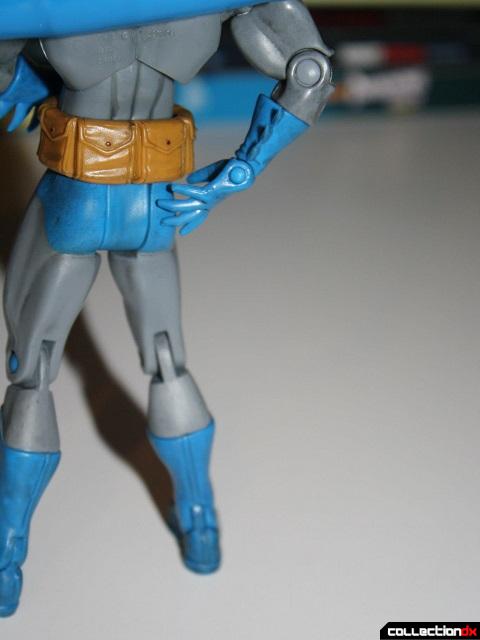 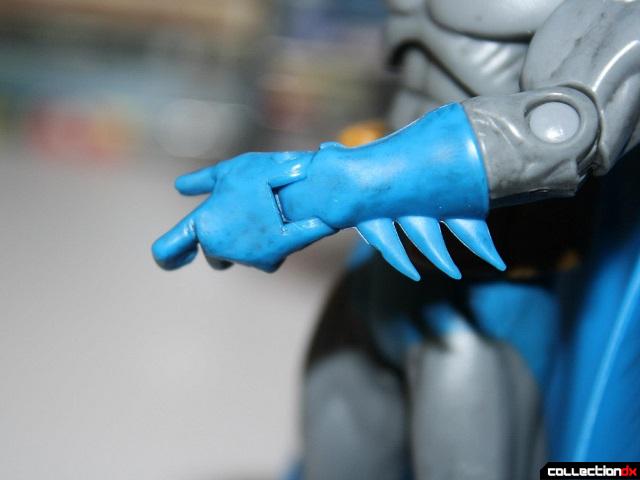 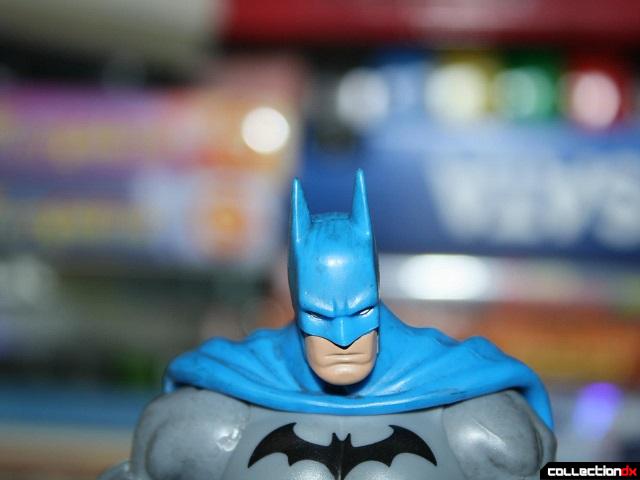 The figure is solid, but some parts give accordingly. The cape is sort of a dense rubber, and looking under it reveals the complete utility belt, one of many Batman signature items. The fins on his gloves and ears on his mask are also made of the same material. 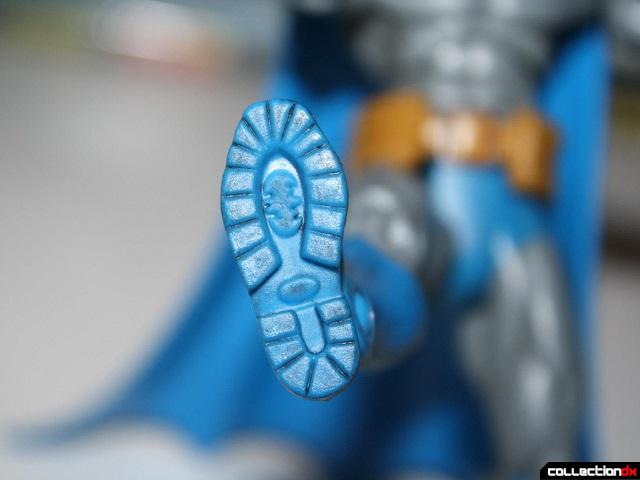 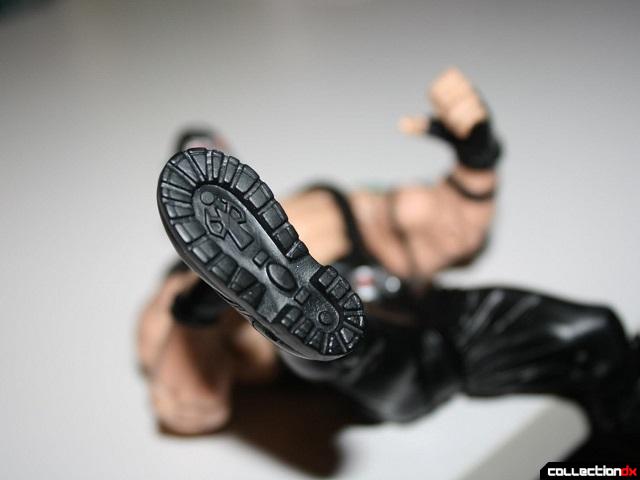 Also interesting is the tread on his boots. Him and Bane do think alike, but who knows. Maybe they have the same shoemaker. 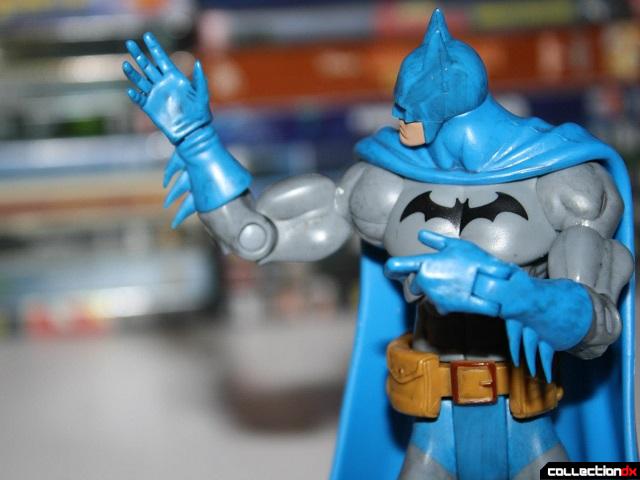 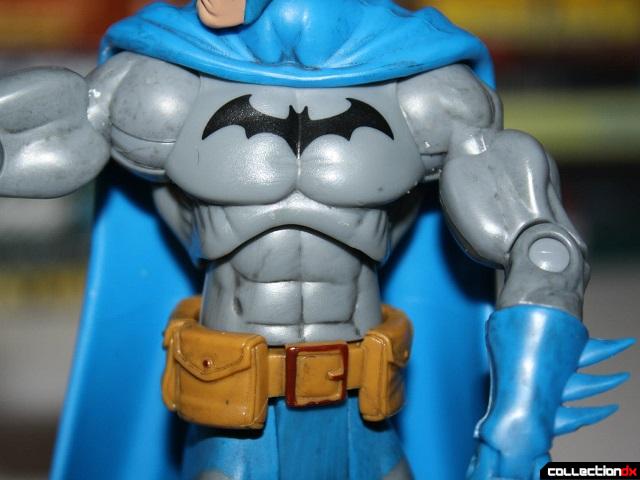 Articulation is pretty good above the waist. His head turns, his forearms and biceps swivel, he twists at the waist, and his wrists and elbows hinge. He has an ab crunch, but the cape makes it mainly good for hunching over more. His shoulders are realistic ball joints, if that makes any sense. They have a full range of motion, but only do what most people are capable of. Which is fine. But it's hard to rotate his arms upward. They get stiff resistance, and the cape adds to that. It's like he's lifting weights too much. 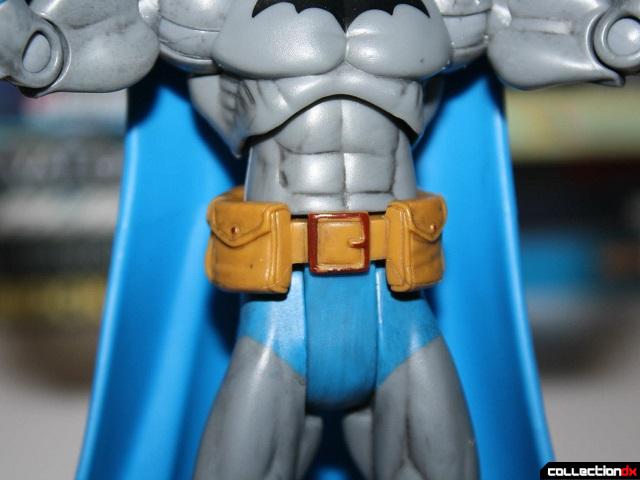 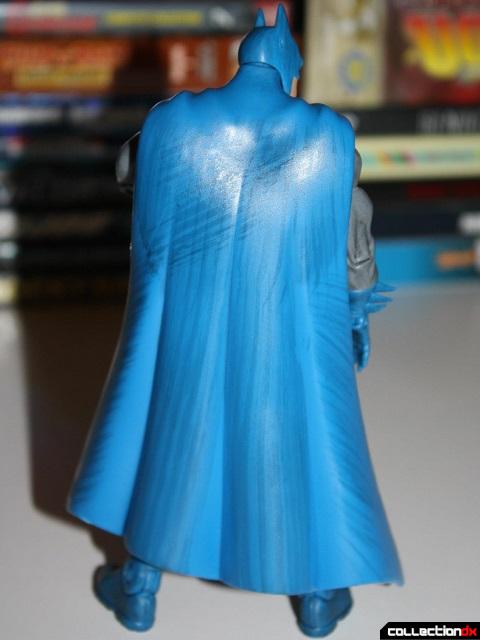 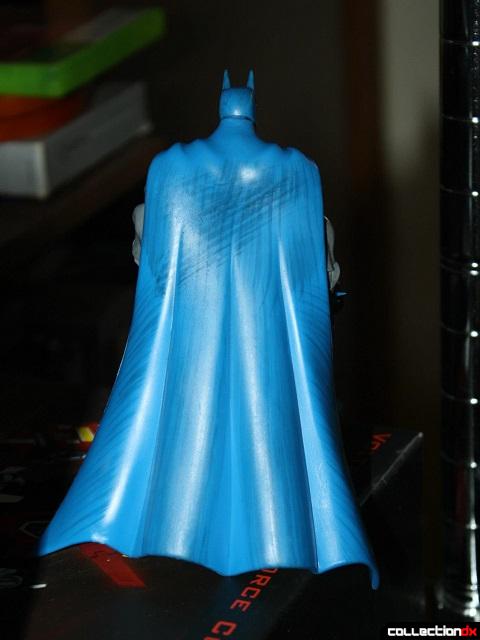 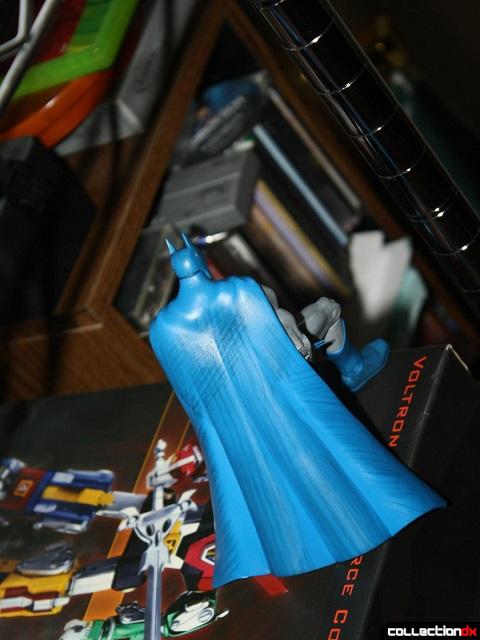 From the waist down, he's a little old fashioned. His knees and ankles hinge, and that would be good enough, but his hips are just your typical swinging hips, so he's not that dynamic. He can brood and watch with the best of them, but he won't be doing anything too crazy. Still, it helps him achieve that more aloof, tall, lean presence. I prefer that to the heavyweight body builder physique that so many comic book characters have today. 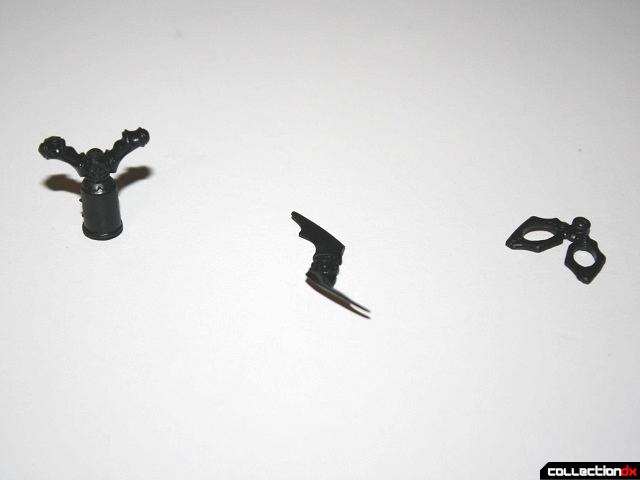 He has three accessories. 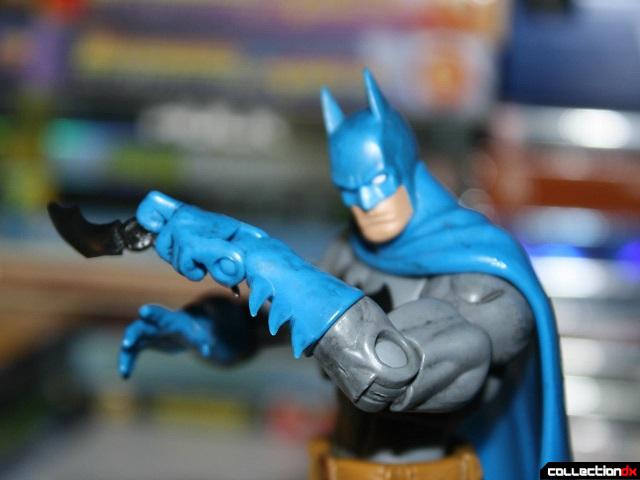 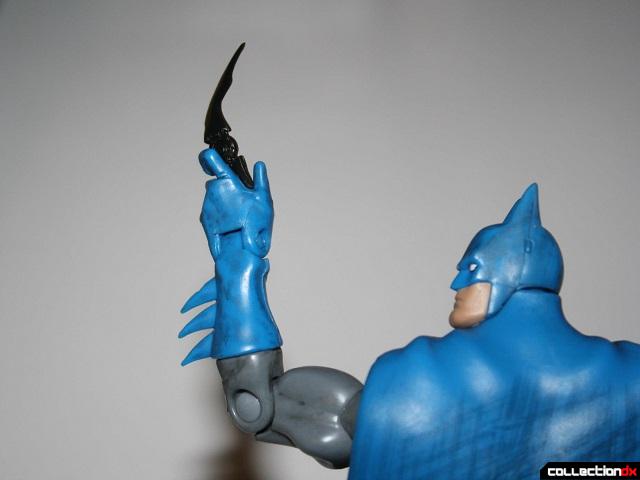 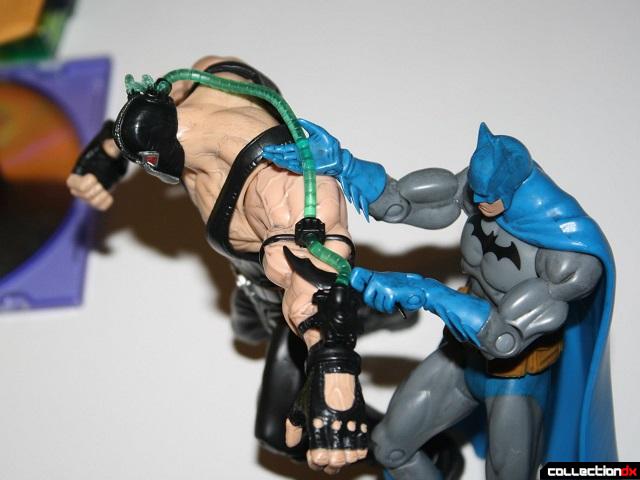 One is a flip-out batarang. It doesn't actually do that, but you can see the joint in the middle. It's what his left hand is molded for. 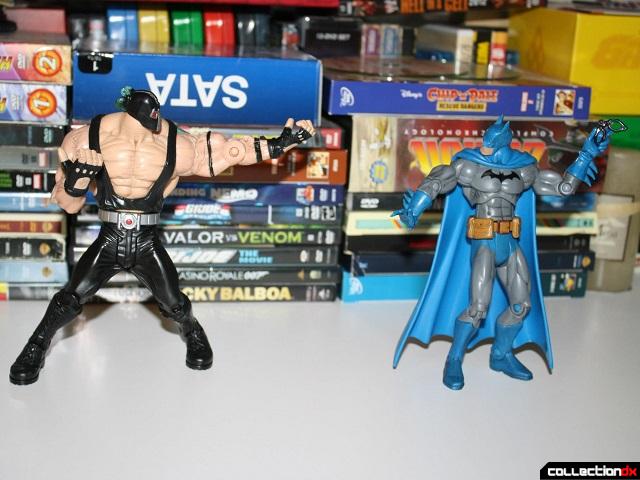 Batcuffs, which he's apparently throwing at Bane in desperation. 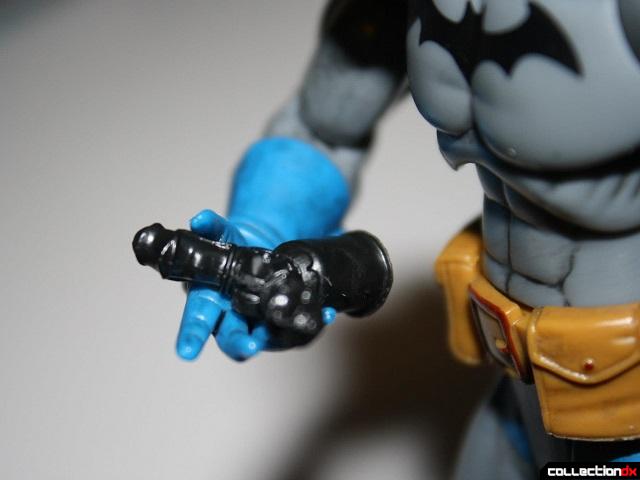 And......honestly, I don't know what this is. Batman probably doesn't either. It's supposed to be a grapple, and I can see that, but it isn't very obvious. 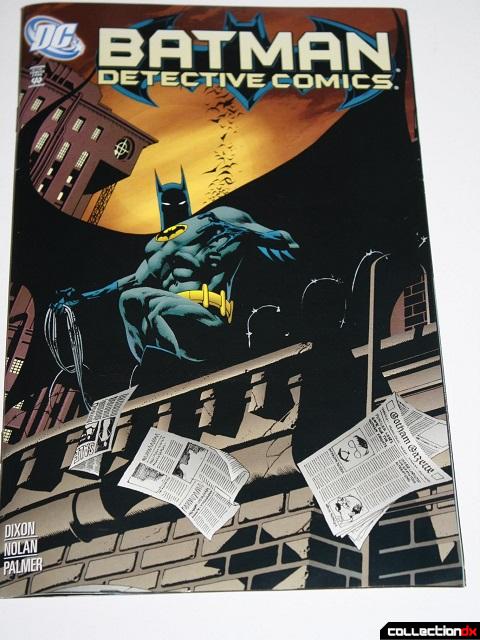 Detective Comics #704 dropped in December 1996. The art is kind of 90's in a bad way, but the story is a fairly interesting one-off. It would have been great for adapting to the animated series, but the nature of the story is actually pretty similar to the episode "The Man Who Killed Batman", which aired almost 4 years earlier. 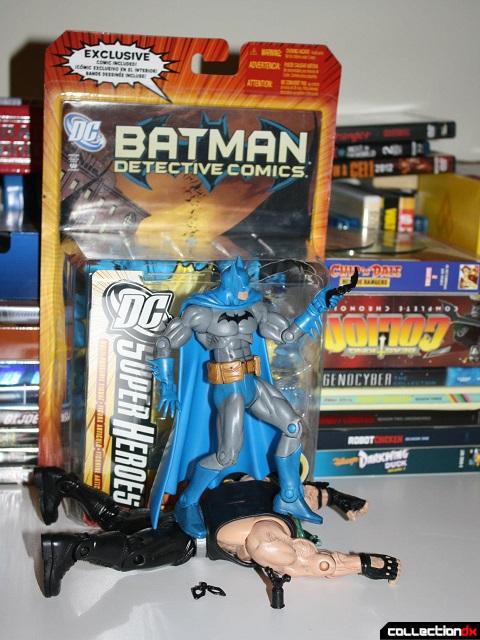 This Batman figure is pretty good, but not great. The limited hip joints are disappointing for something made in the year 2006. Or rather 2003, because this is a repaint of one of the Batman figures from Mattel's previous Batman toy line that started in 2003. But even so, the Four Horsemen always manage to make their work visually intriguing. That, and I also really dig the included comic gimmick. This retailed for $10, and now runs for $40+. For that much, you could go to your local toy store and get two more modern figures. But they probably won't have any accessories or comics, due to today's cost-cutting measures. So there's definitely a collectible charm to this. If you're a Batman or comic fan like me, there might be something here for you.

So he comes with a bat-grapple, but can't hold it? It's nice that he can hold one of his accessories. I preferred the DC Universe Classics version released a year or two later.

DCUC is the pinnacle this was leading up to, and I'm looking forward to getting more of them, like the Batman you mentioned.

The head sculpt looks like they predicted Batfleck 10 years ahead of time.

...I never noticed it, but now that you point it out, you right.