Color me surprised that 2 years later, Bakugan is still pretty hot with kids. The last one I reviewed was some time ago, and up until now I haven't been compelled by another. Last Christmas, however, the hot toy was a combining Bakugan, and that I had to check out... uh… for my kids.

Typically, Bakugans are small geometric shapes that transform into some kind of creature when held over its base, but this one goes a bit further. The 7 in 1 Maxus Dragonoid is seven separate Bakugans, that both have an alternate mode, and combine.

Let’s first look at the individual Bakugans. Apparently, only one is a proper Bakugan, the rest are something called "Traps". 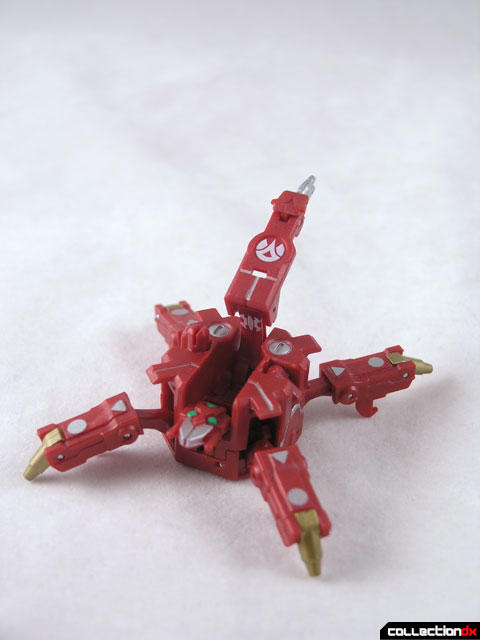 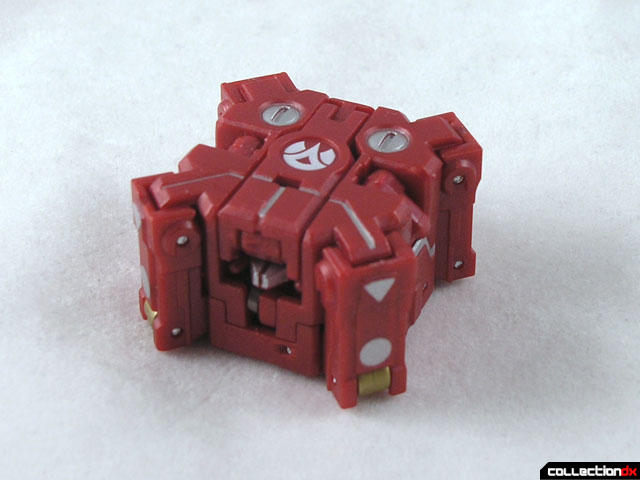 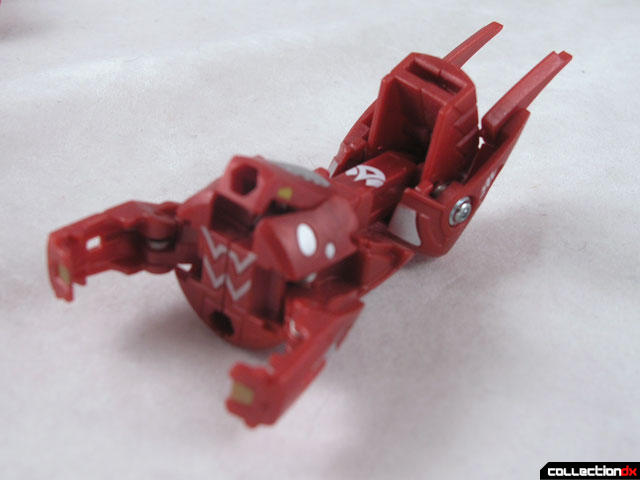 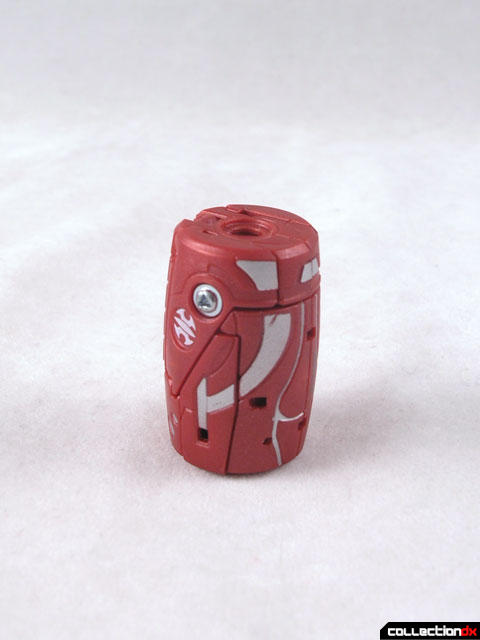 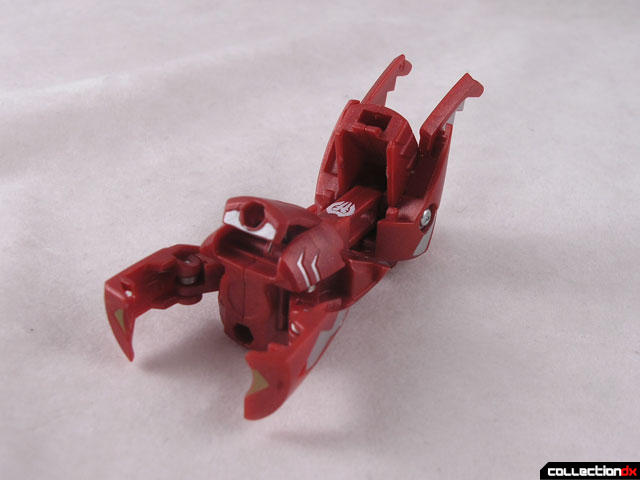 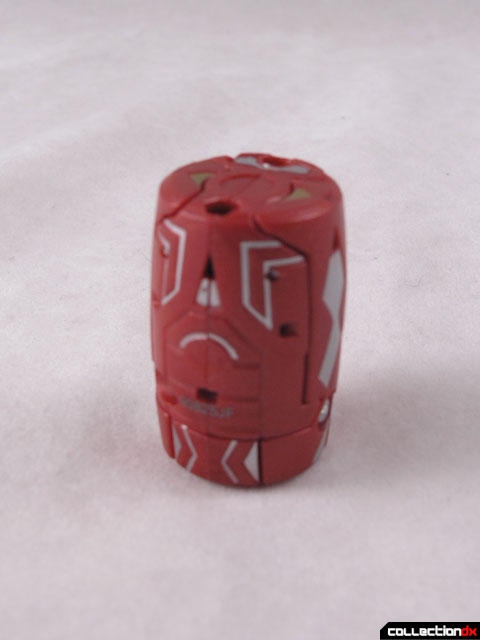 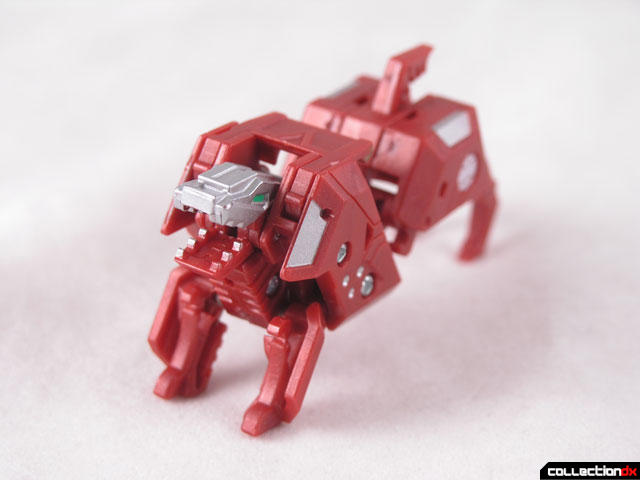 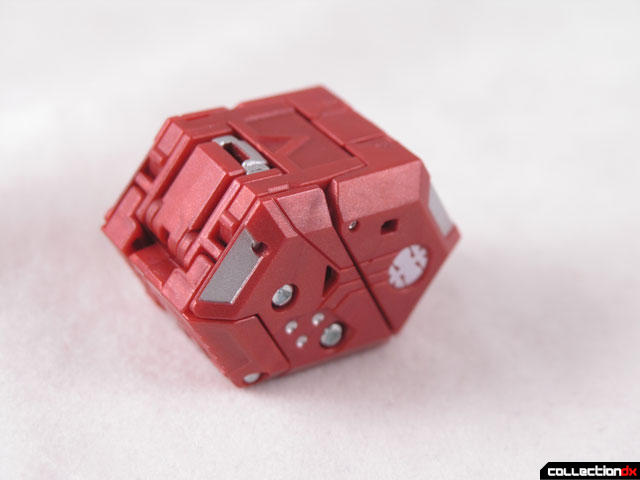 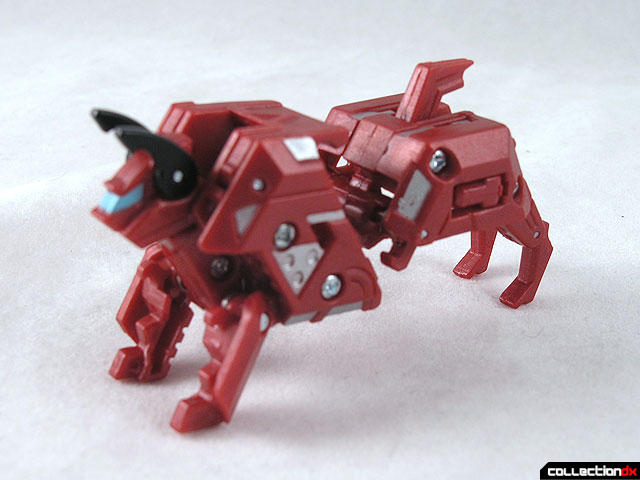 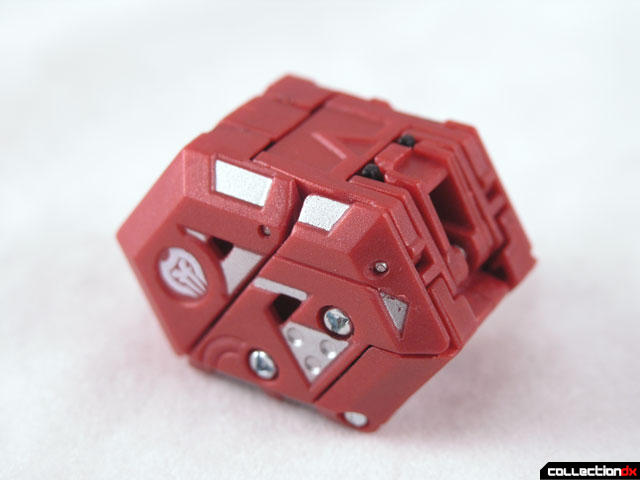 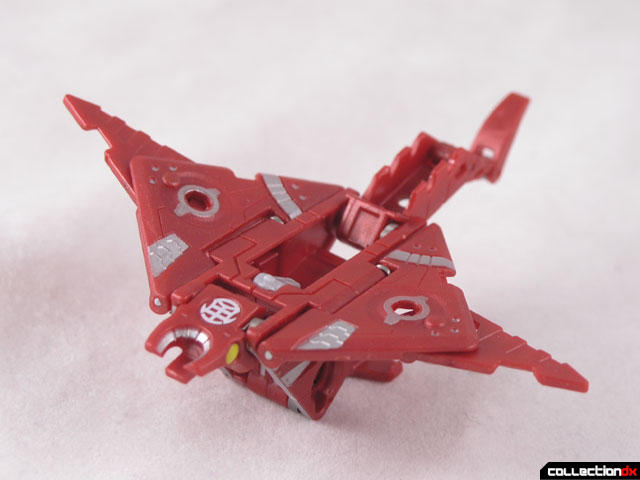 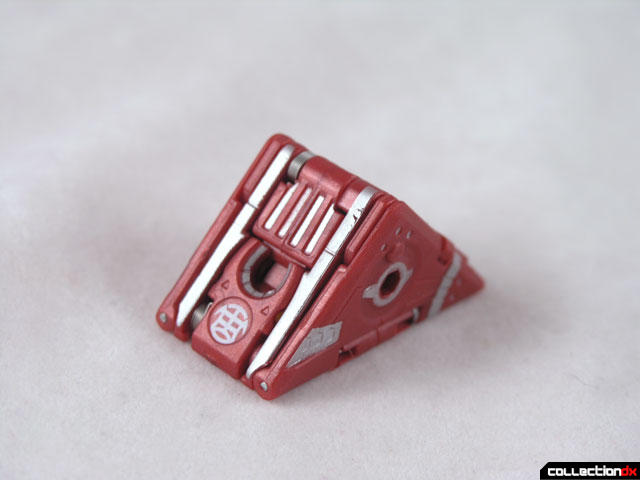 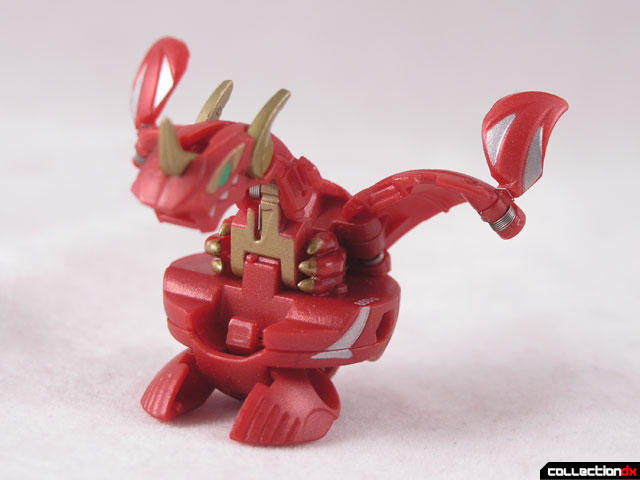 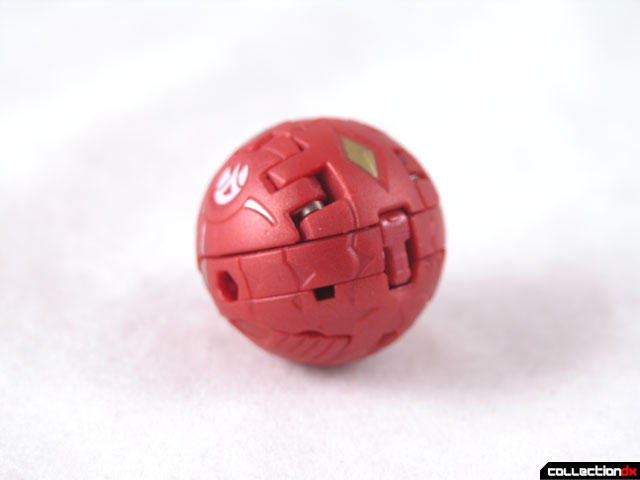 All together they look like pieces of a puzzle… 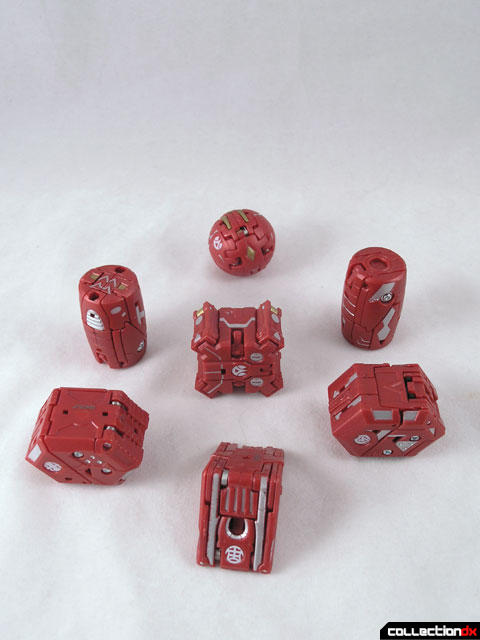 And a puzzle it is. Each piece has an unusual transformation, with spring loaded actions to go from object to component. I really have to give credit to the designers for the engineering here.

Once the limb is formed, each part connects on a simple peg in hole system. The combined unit is pretty sturdy, albeit small. 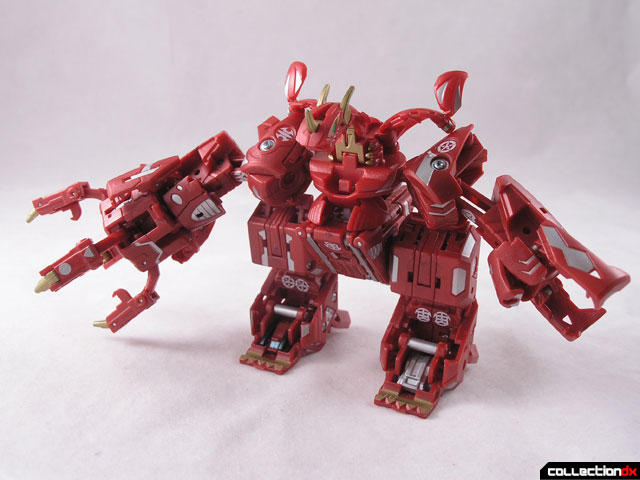 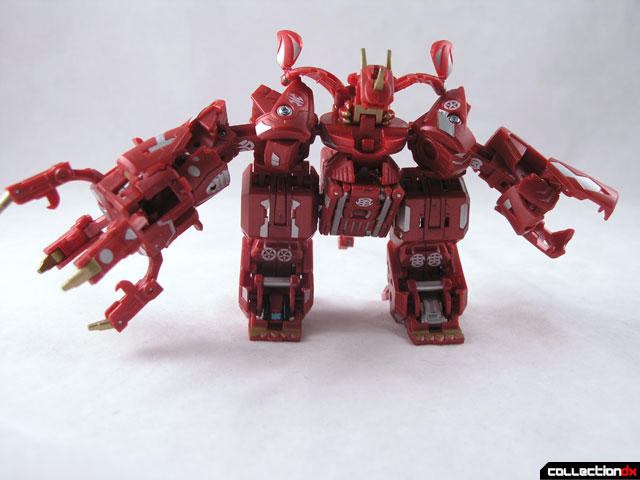 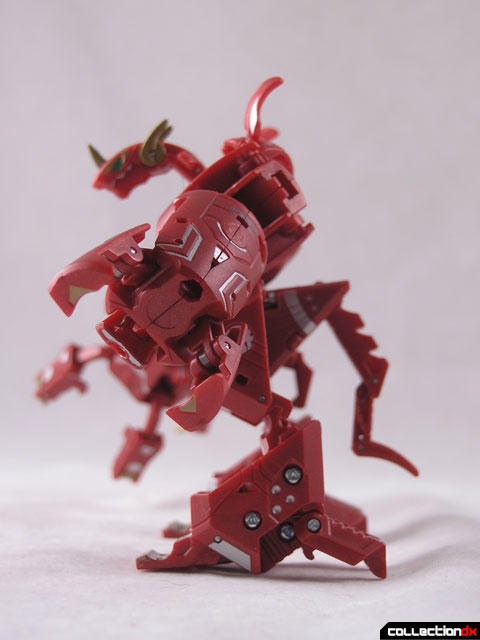 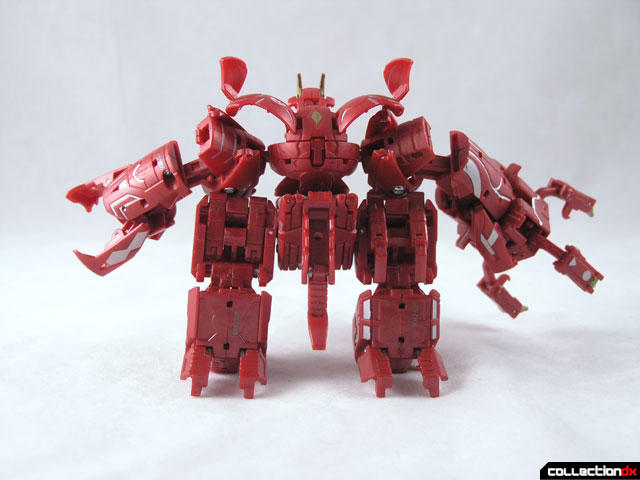 We're talking 6 inches tall. There's a lot of engineering packed into this small package, and it makes for a heavy, dense figure. Unfortunately, it’s got limited articulation. 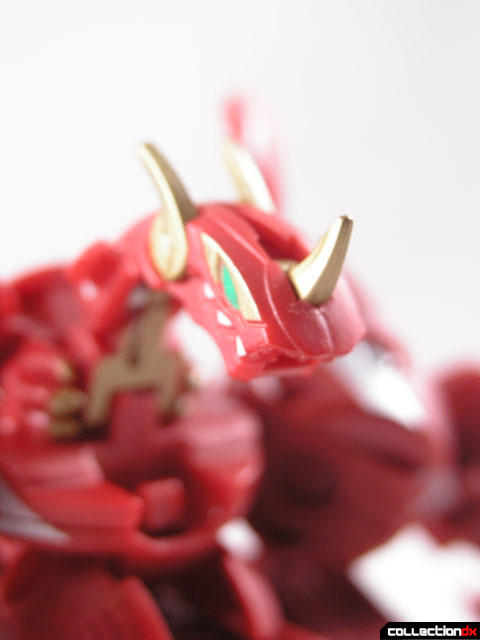 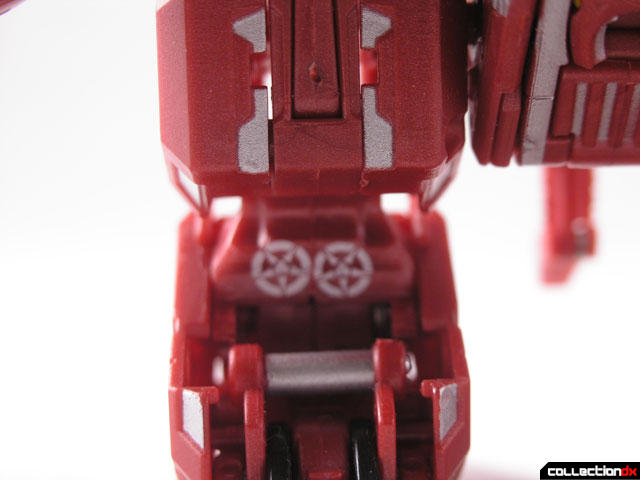 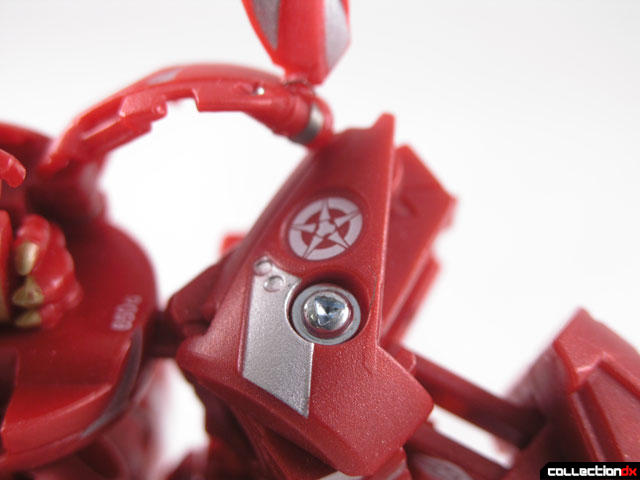 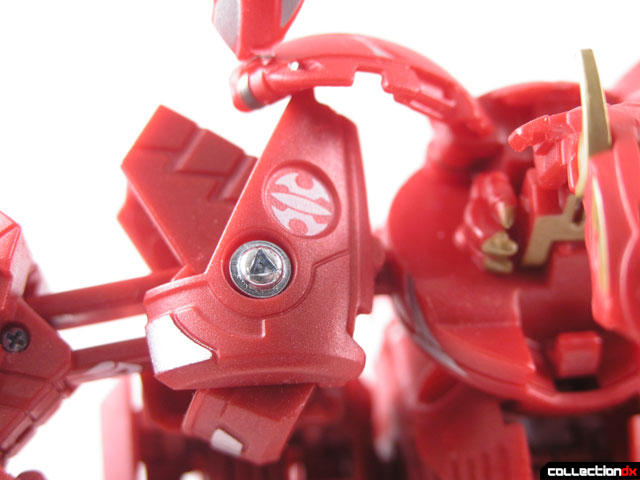 I have no idea how, or if, this works with the Bakugan game, but it looks neat. Unfortunately, I don't think neat justifies the $40 price tag. This is a kid’s toy, and it's small. I guess if a single Bakugan costs 5 or 6 bucks, it makes sense, but still, it seems like a lot. 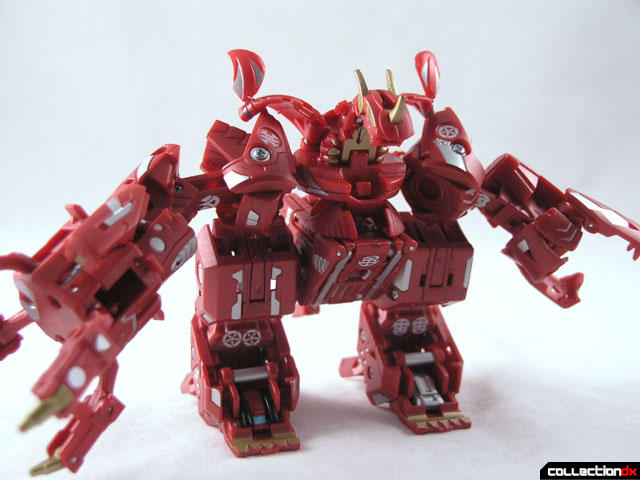 Pretty neat. I thought very seriously about picking him up. I appreciate any coverage of the contemporary toys which are just off our radar. These remind me a little of the Kamen Rider Hibiki disks. Classic mecha lines.

After reading your previous review of that dragonoid I was fascinated enough & went out bought it, but the smaller standard sized one. They are cool little things. I haven't bought any since.. but now you've opened my eyes to them again.. Damn it..

Bakugan, and Gorimiti capture a lot of the old school toyline feel. Lot's of things to like in the toy aisles these days actually.

As to the price, this cool set sucked me in when I saw it on clearance at all the WalMarts for $20-$25 dollars everywhere. Easy to get now. Cool little things.

Gormiti almost tickles my fancy. It's like battle beasts or Z-bots, but not as cool-looking.

I kind of like it, but the head seems to small compared to the rest of the body. Good engineering, but bad artistry.

Actually I don't like Bakugan too much... But after reading your review about Maxus Dragonoid, have to admit that this is an awesome toy.

Anyway, is it the same like the upcoming Transformers toyline Powercore Combiners?

General consensus on the PCC line is they look ok individually, but structurally they're weak when combined.
At this point, I'm not getting any of 'em. The only TF combiner I have is a G2 Devastator... currently in storage and thoroughly buried.

I got this last week for 15 dollars on a sale. For this price, I'm satisfied as it's a pretty nicely designed transforming toy.